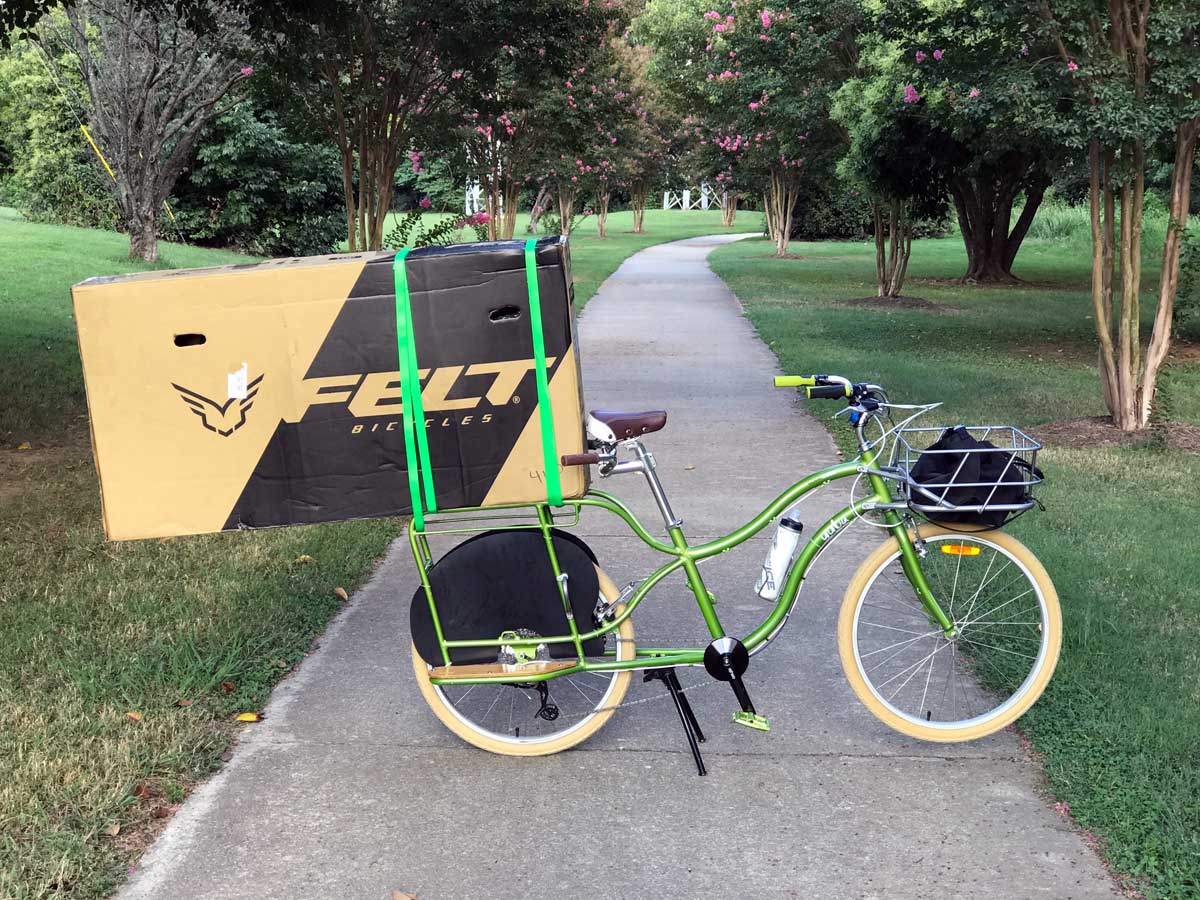 I’ve had my Yuba Boda Boda for years now, busting my legs up the hills carrying the kids to school or bringing home the farmer’s market haul. The stock single chainring that came on my model was fine for flat ground, but there’s probably a reason current models come with a triple. So the Efneo GTRO 3-speed gearbox crankset was a welcome addition. Efneo first told us about their plans in 2012, but didn’t make it through all of the testing and final crowdfunding campaign until 2015. And then it took a little time to get those all shipped out. Now, it’s here, and it’s ready to roll…

WHAT’S IN THE BOX? The Efneo GTRO comes with the shifter pre-installed to the drive side. So, if you need to run this internally, you might want to reconsider unless your bike has a very forward-positioned cable exit port leading to the crank…or you want to get creative with the routing. You’ll see why in a minute. But, for external routing, this makes installation very quick and easy (assuming you have the right tools). The system works because it braces a “reaction lever” against the chainstay. So, caveat #1 – your chainstay must be straight and unencumbered with kickstand mounts or permanent cable guides that would prevent the lever from making full, flat contact. This is the stock crankset…

…which did have a nice chainring guard and allowed for a full length chain cover to be installed. My bike also just happened to be the one year that Yuba spec’d a weird, proprietary-ish BB design that held that chain cover in place, which made my particular installation more labor intensive. And it involved hammers and cursing. The stock crankset and BB came in at a combined total of 1,177g. Efneo requires you to use their bottom bracket because the driveside has a lip that’s required to properly seat the gear cluster against it. It also comes with a wave washer that must end up in the right spot.

Once the BB is threaded in, you simply press the crankset on like you would any other square taper crankset and tighten the bolt. The whole thing spins, so you don’t need to line up the reaction lever perfectly as you’re pressing it on. Just rotate it into place when you’re done…

…and zip tie it to the chainstay. Or use a coated wire or something more secure if you want, which might not be a bad ideas as you’ll see in the next section. The lever has two holes for the zip ties to go through – you’re supposed to use two of them and crisscross them. Two grooves on the top help guide cable housing, which is a nice detail. The shift lever has a closed mounting hole, so you’ll need to remove your grip. In this case, it meant destroying my cork grips, unfortunately. It’s also available with a twist shifter. The end result is a very clean look that adds lots of range. The Efneo’s 28-tooth ring works as a 1:1 in the lowest shifter setting. Click up and it goes to 1:1.43 (40-tooth equivalent), then to 1:1.79 (50-tooth equivalent). So, I now have more low end and high end, with approximately the same as before in the middle “ring”.

Caveat #2 – because the chainring is only 28 teeth, it’s probably smaller than what it’s replacing. That means you may have to remove a few links from your chain. I haven’t yet, but it’s definitely looser than before, so I might if chainslap becomes an issue.

It’s worth mentioning they have solid installation videos on their website, making it easy to follow along. As long as you have a crank extractor tool (assuming your old crankset is square taper) and BB removal/installation tools, you should be able to do this at home. I figured the best way to test it out was immediately put it under load. Full disclosure: The first crankset they sent had a welding flaw on the reaction lever, which snapped off within the first couple miles. Which snapped the zip ties, leaving the crankset unable to backpedal or shift properly. It was still rideable, so such an event didn’t leave me stranded. Fortunately, they rush shipped a replacement part, which is a simple bolt-on procedure. In fact, Efneo has a video showing how to remove and reinstall the entire reaction lever ring assembly because you’re able to rotate it to properly align the cable to suit your frame’s design.

Once repaired, the unit’s been flawless so far. And my first ride on it was to deliver a Felt road bike to UPS to return. It’s about a 4.1 mile ride on roads and greenways. There are a couple of steep sections (well, steep when you’re riding a 40+ pound bike carrying a 20+ pound package with a 180+ pound rider), which put a lot of torque on the system. I shifted under load in both directions, and it handled it just fine.

Shifting to a harder gear is perfectly seamless and can be made under full load. Shifting to an easier gear requires letting off the pedals just a bit. Or do both from a complete standstill. The shift levers work in reverse to the usual setup, which takes a little getting used to. The little lever releases cable to a harder gear, and you’ve got to push the larger thumb lever to move it to an easier gear. Initial setup required nothing more than a couple twists of the cable bezel at the shifter. So far, the new lever is holding up fine, as have the zip ties. I’ve also ridden it to and from the farmers market with a basket full of food up front (which also has a couple of grunty uphills on the way home), and been tooling around town on it. It pedals fairly quietly, and coasts even quieter. Efneo wanted us to test it on a bike with a rear derailleur, presumably to show that it can handle the range of gears, and it does. There’s no chain rub on the gear body at any chain angle, though my chainstays are really long on this bike. But there’s plenty of clearance, so I don’t suspect it would be an issue on a traditional bike. They say it’s compatible with any rear setup except fixed wheel.

It’s available in black or silver, with a68mm or 100mm (fat bike) bottom brackets, and can be had for trikes or recumbents, too. Retail is $499. I love my cargo bike, and now I love it even more.