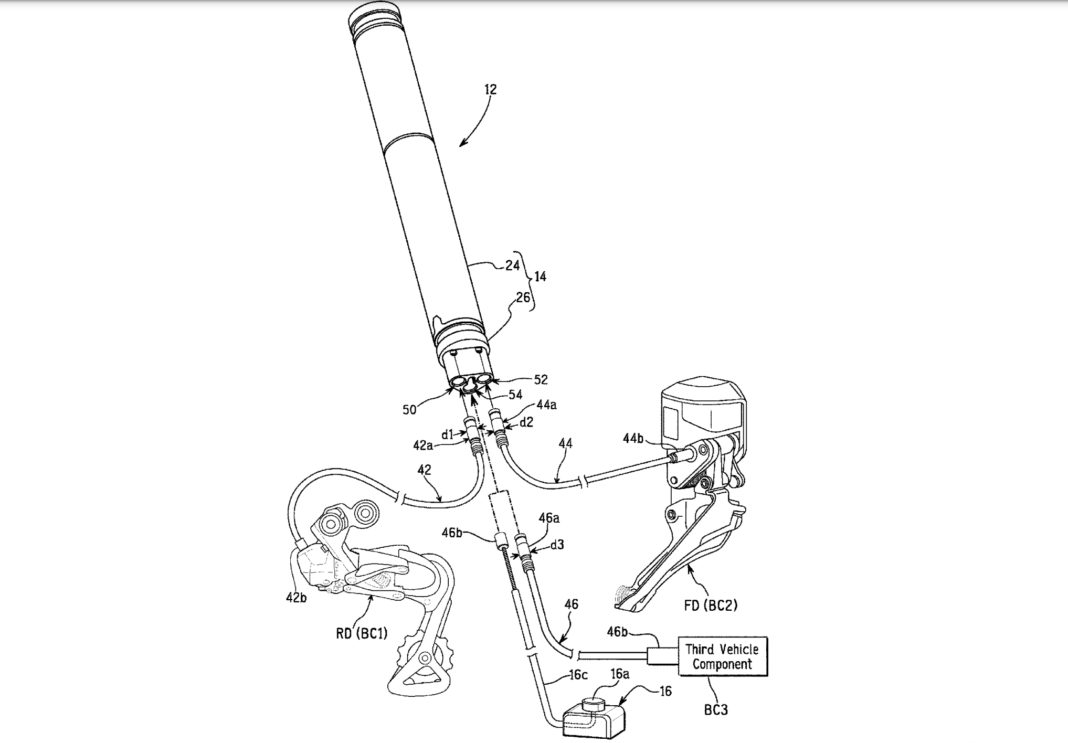 You could spend a lot of snowy days by the fire reading Shimano patents. Heck, you could spend years. Get cozy, because Shimano recently added to the pile with more patents regarding its wireless shifting system.

It’s a big question mark about when we’ll see Shimano’s wireless shifting system, or if we’ll see it at all. (All signs point to yes.) And of course, we still don’t know what it will look like. These patents give us some clues. But ultimately, a patent does not necessarily reflect what the final product will look like.

Let’s dig into some of the clues we can glean from the latest patents regarding Shimano’s wireless shifting system.

Like FSA’s WE system, it appears Shimano’s wireless shifting system won’t ditch wires altogether. But we already knew that from previous patents Shimano has filed. The system will include fully wireless shifters, it seems. These will work in conjunction with the derailleurs, battery, and junction box. Wireless receivers appear to be integrated into the derailleurs (labeled WC3 on the rear derailleur in FIG. 3).

The newest crop of patents regarding Shimano’s wireless shifting system seem to be iterative. That is, Shimano has been dreaming up a lot of different ways to set up the charging and powering system. This is yet another.

In this version, the front and rear derailleurs connect to the main battery. A junction box splits the power from the battery to each derailleur.

But there’s a third wire in FIG.3 that seems a bit mysterious upon first look. That wire, labeled EW, allows the system to charge without having to access the battery directly. That’s useful, since the battery will be tucked away inside the frame or seatpost, as is the case with the current Di2 system.

Instead, the system gets charged via the EW wire. This presumably plugs directly into a wall outlet. It’s possible this could eliminate a separate junction box component, similar to the one found on Di2 systems. That’s where you plug in the Di2 charger, and where you fine-tune the derailleurs. It’s possible future micro-adjustments can be accomplished via the shifters with the wireless system. SRAM’s eTap system works this way.

Check out FIG.5 and you’ll see an alternate battery setup. The rear derailleur has a battery labeled BT2 that is mounted to the derailleur itself. The same charging cable Shimano uses on the wired system can be used to charge this external battery. in this example, we’re seeing a truly wireless shifting system.

The problem is, there wouldn’t be a way to charge the front derailleur in this example. The solution: Who needs front derailleurs anyway? FIG.5 seems to represent a wireless shifting system ideally suited to 1X drivetrains. Does that mean gravel/road? Or does that mean MTB wireless shifting? indeed, the system could work in any of those scenarios.

Take your keys with you?

FIG.8 has another intriguing little detail. The rear derailleur includes a removable wireless communicator, labeled WC5. It’s unclear what purpose this might serve.

My best guess here is that by removing the wireless communicator, you can disable the wireless shifting system altogether. That could be handy if you’re headed into the coffee shop and don’t want anyone to be able to shift your gears should they get it in their heads to steal your ride.

That’s purely a guess, though. It’s possible Shimano has other reasons for this removable communicator on its wireless shifting system. (Got ideas? Post ’em in the comments below!)

In a separate patent filing, Shimano has also put its mark on a new power supply. This supply can drive power not only to the wireless shifting system, but also to a third component — most likely a dropper post.

Interestingly, the cables can transmit both power and information. FIG. 3 also shows that the system can connect wirelessly to your computer. That’s an important integration for us data nerds.

It should come as no surprise that Shimano seems to be placing a premium on battery life with its wireless shifting system. Its Di2 system notably has a long battery life, often allowing riders to go weeks or months between charges.

Sticking with the same type of battery and wires running to the derailleurs seems to be a play for reliable, long battery life, thereby setting it apart from some of its competitors.