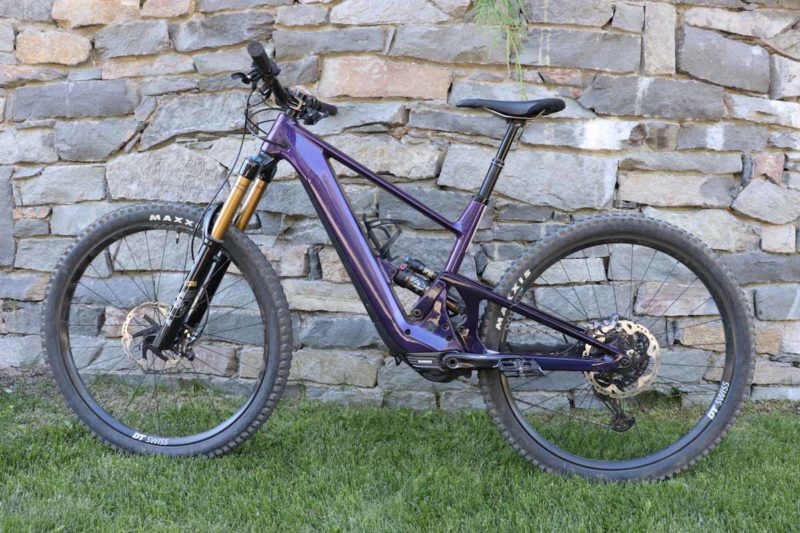 What happens when you’re not a racer, but you work for a company that specializes in race bikes? Well, if all goes well you start creating prototypes that you’d want to ride, and your bosses let you produce them! Such is the story with SCOR, a new brand born from a small group of engineers working for BMC. When a few like-minded individuals chopped up and glued together some frames to offer much more travel than BMC’s bikes, the company said go for it – but give them a new brand name.

Bikerumor has checked out SCOR’s initial model lineup and their kid’s bikes, but at Crankworx Whistler I got the chance to take one of their eMTB’s for a ride. I hopped on their 4060 Z LT XT for a lengthy ride around Blackcomb Mountain, which offers steep climbs and very technical descents. 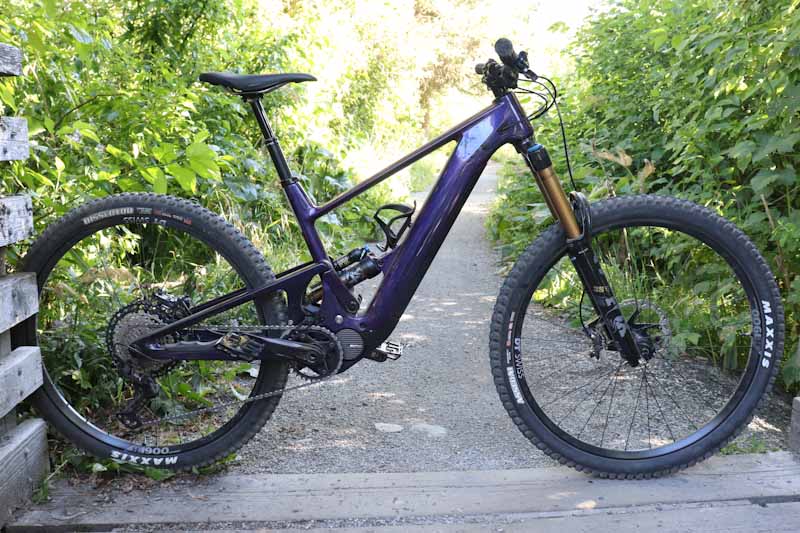 Before we get into how the SCOR rode, let’s run down the basic specs on the bike. The 4060 Z LT is the long-travel option from SCOR’s lineup, so it has 160mm rear travel and a 170mm fork. The linkage is a virtual pivot point design (which for the record was well in development before Santa Cruz released their latest lower-link VPP suspension). The frame is full carbon front and rear, and the complete bike comes in at an impressive weight for an eMTB at 49.6lbs, especially given its big battery and aluminum wheels.

The bike I rode had the XT build kit, but based on my one-ride experience I’m keeping this article focused on the frame, suspension and drive system. To address it quickly, I had no mechanical issues with anything during my test ride. 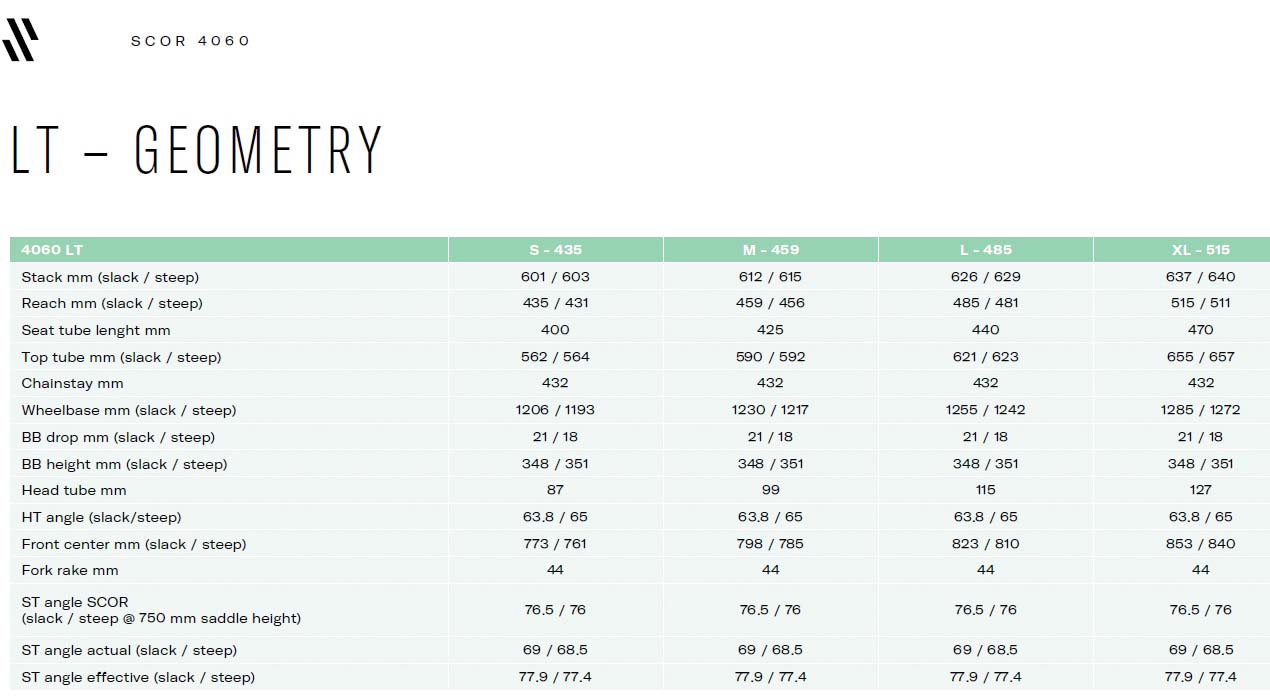 *Please note this is the geo chart for the non-electric 4060 LT (one showing all sizes was not available for the Z eMTBs). The only difference is the eMTB’s chainstays are 435mm. Click to enlarge.

The first thing to note about geometry is that SCOR’s eMTBs share the same angles and dimensions as their non-electric models (with the exception of 3mm longer chainstays). Above is the complete geo chart for the 4060 LT. I was riding a medium frame, and its key figures include a head tube angle of 63.8° and an effective seat tube angle of 77.9°. Reach is 459mm, and SCOR has achieved some very short eMTB chainstays coming in at just 435mm (all frame sizes). SCOR’s design mantra was to create bikes that are fun to ride, rather than performance focused race bikes. Their geometry figures exemplify this, being appropriately up to date but not getting extreme in any direction. 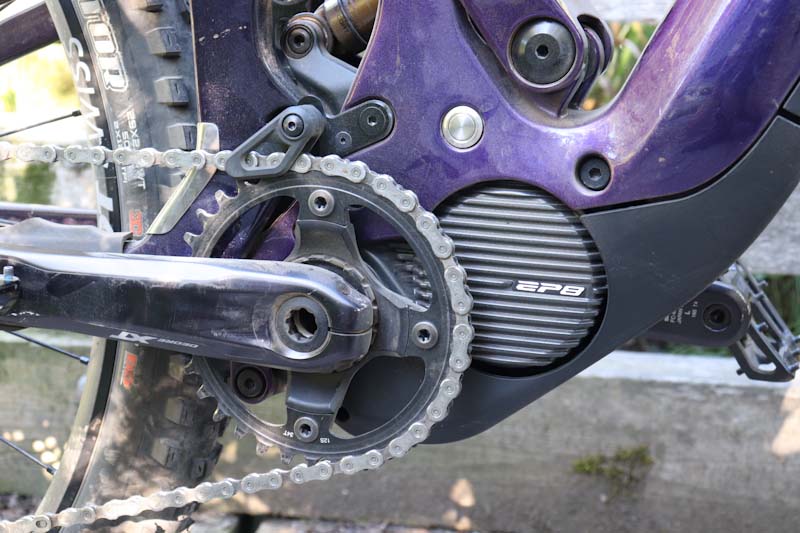 Since most rides begin with a climb, let’s start by talking about how the 4060 Z goes uphill. In short, thanks to the Shimano EP8 motor, it goes uphill quite easily! I’m impressed with how much power the EP8 puts out, as I’ve ridden ebikes with more impressive specs but I don’t feel the EP8 lacks power at all. Our ride got into some steep uphill pitches right away, and to give the battery a good test, I jumped right into Boost mode. After shooting up Blackcomb Mountain at a ‘laugh out loud’ pace, I can’t imagine any normal trail would challenge the EP8’s power output. 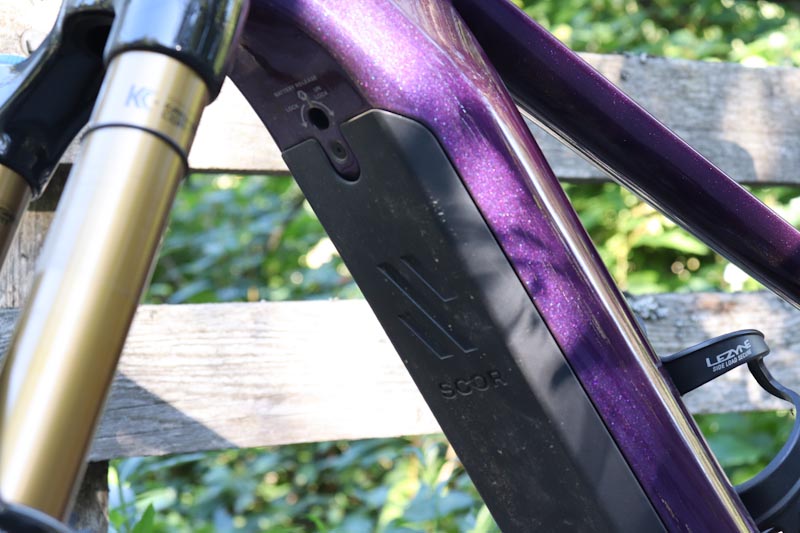 SCOR opted for a large 720Wh battery for their eMTBs, and it will carry you pretty far. We rode for at least three hours, covered a lot of elevation, and I didn’t even drain the battery halfway. I am a lightweight rider, but I was not shy about using Boost mode for most of this ride, only dipping down to Trail a few times on short traverses or mellower bits of climbs. The battery is released with a 4mm allen key for swaps or cable maintenance, but as you’d expect it charges in the frame. 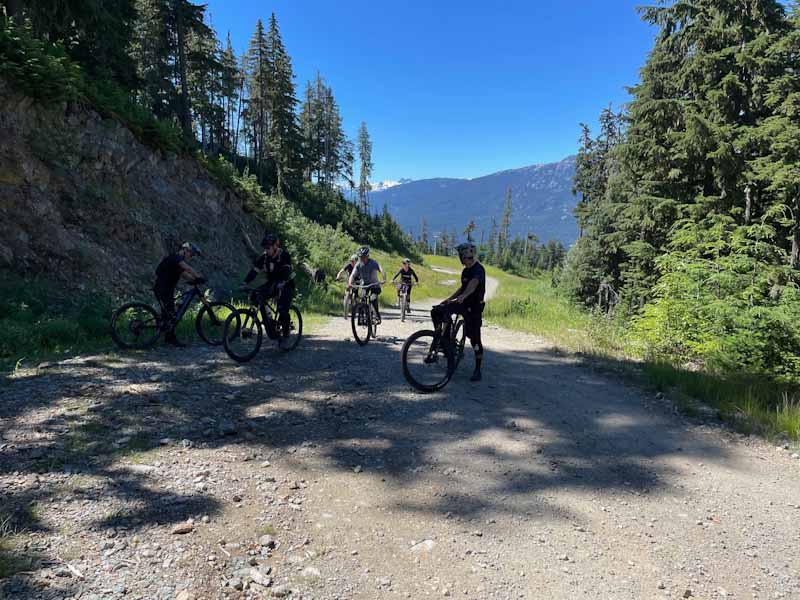 As for geometry, I’m 5’10” and the 4060 Z LT fit into my comfort zone. I’m pretty happy with reaches between 455-465mm, and this bike is right in the middle. This gives a roomy front end, but doesn’t stretch you out too much allowing for a comfortable riding position and some body mobility over the bike. The chainstays are super short for an electric bike, which SCOR’s designers conceded may sacrifice a bit of traction on the steepest climbs but keeps the bike feeling nimble on the trail. This is another example of how these bikes were built for the average rider, not a professional racer.

On the climb, I had no problem getting power to the pedals with the bike’s steep seat mast, and the front end length was enough to center my body weight nicely between the wheels. Despite the stubby rear end I don’t remember spinning out at any point, even when the climb got rooty and technical. I don’t mind pretty slack steering angles for climbing, but if that’s not your cup of tea you might find the 4060 Z LT a bit floppy up front. With a BB height of 348mm, the bike rides fairly low but I don’t think I tagged a pedal anywhere during my test ride. 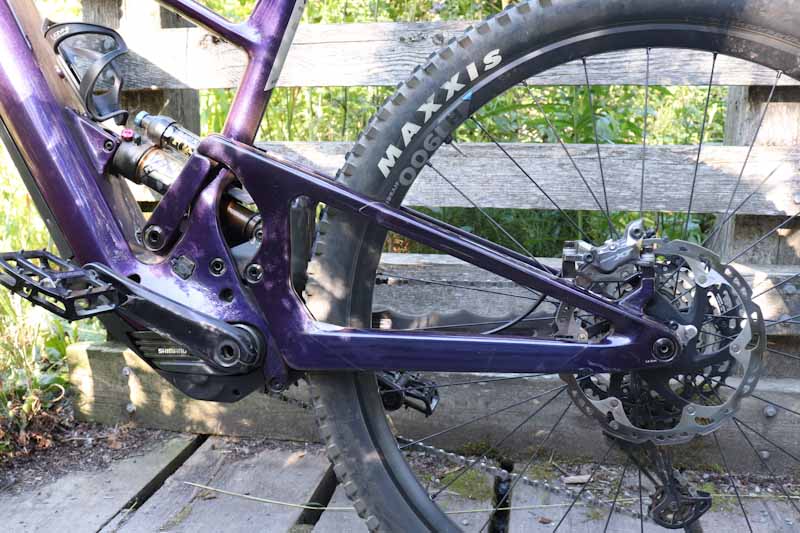 I asked SCOR’s Mountain Bike Engineer Mariano how he tunes a suspension linkage for a recreational rider rather than a pro racer, and what he told me jived with what I’d expect. Pro MTB racers usually run their suspension really stiff, and their bikes are not forgiving. SCOR’s linkage was tuned to be more supple in the initial stroke, and have less anti-squat than race bike would. This basically means the bike offers a softer, more comfortable ride, and the reduced anti-squat means you can compress the bike to playfully pump rollers and spring out of corners or jumps.

On the climbs I found SCOR’s linkage did a great job of staying higher in its travel and keeping pedal bob to a minimum, even with the shock left wide open. I climbed with the shock open and enjoyed solid traction on fire roads and singletrack sections. While it’s tough to gauge efficiency on a motorized bike, I felt the linkage was pretty good at ignoring pedal inputs. 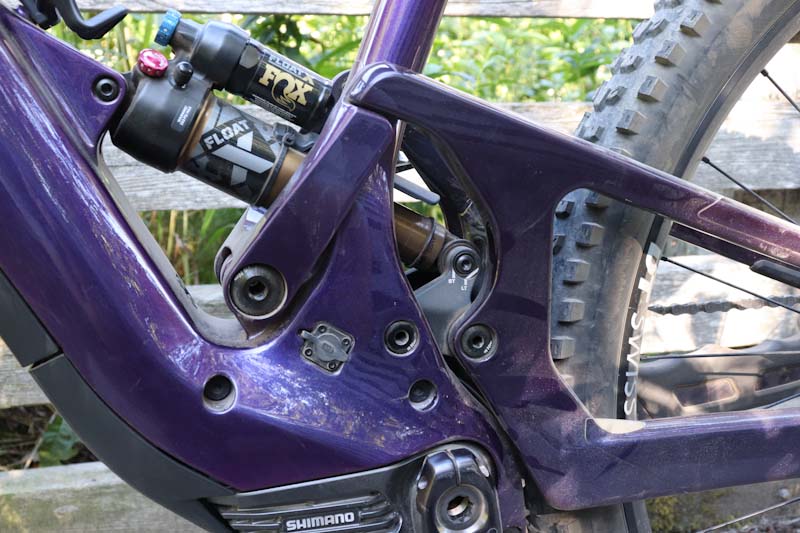 These links look strong and stiff, and the 4060 Z LT did offer a pretty solid ride.

Going downhill, the virtual pivot point linkage did well at rounding off hits big and small, gobbling up sharp rocks and roots with ease. While a 50lbs bike will never pop like a 32lbs bike, I did my best to hop and jump anything I could and found the SCOR did offer a fairly lively ride. I also noticed the frame feels pretty stiff, and the bike plowed straight rather than squirming through rough technical descents.

But wait, there’s more! Below I’ve included some cool finishing features SCOR offers on their bikes. 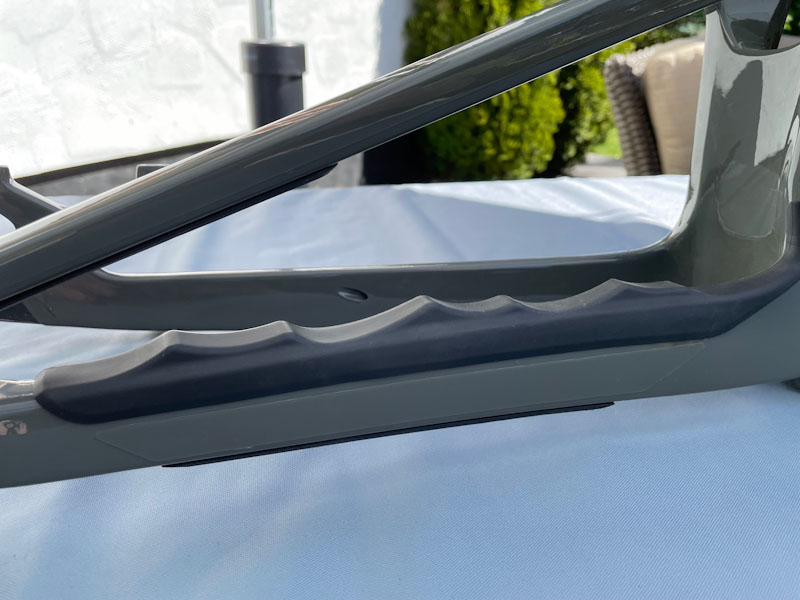 A sharp eye might notice something cool about SCOR’s chainstay guard; it’s shaped like a jump line! Indeed, this design is a tribute to a jump trail that their MTB engineer Mariano liked so much it prompted him to move so he could shred it anytime. 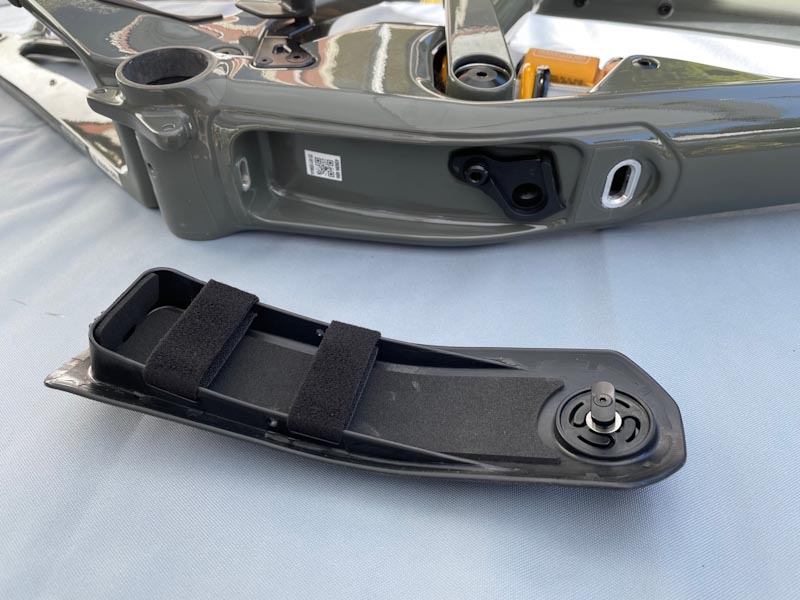 In a previous article, we mentioned the non-electric models’ storage compartment, but we didn’t have a photo. Hidden beneath the frame guard the compartment houses a spare derailleur hanger, can carry a multi tool, and the little holes on the sides can hold quick links for chain repairs.

SCOR has kept the branding pretty subtle on their bikes, but they invite you to give them a splash of color or an eye-catching aesthetic. Customers can purchase Slicy frame protection decal kits with their bikes and choose from pre-made designs or go fully custom, filling supplied templates with your own artwork.

i dig it, if i didn’t have too many bikes as it is and there was us availability,,,,oh never mind