If you’ve been considering switching to a SRAM 1x group, there are probably two big factors to consider. Price, and the need for an XD driver. Riders may have been creating their own modified 1x drivetrains with cassette adapters and such for years, but the addition of a commercially available 1x group that is actually affordable – really affordable, is something new.

Not only does SRAM’s NX group represent a massive decrease in price, it also offers something new in terms of the cassette. Rather than relying on SRAM’s XD driver, the new PG-1130 cassette uses a standard 9/10/11 speed freehub that lowers the barrier to entry even further. So you have a group that offers most of the 1x advantage that is also affordable, and accessible.

But is it worth it? Likely one of the most exciting pieces of the group, the new PG-1130 cassette breaks new ground for SRAM’s 1x lineage. Their first wide range cassette to not use the XD driver, the NX level cassette ends up with slightly less range with an 11-42t spread instead of the previous 10-42t. That was the whole point behind the XD driver – it allowed a smaller 10t cog to be used, and also results in a much lighter cassette. Looking at the PG-1130, you might guess that it’s not light and you’d be right. At 525g (claimed at 538g), it’s a full 125g heavier than the next closest competitor, the XG-1150 which requires an XD freehub body at a claimed 394g. This is also the first SRAM wide range cassette that uses a multi-piece assembly that is comprised of 16 pieces including the lock ring and spacers. With the exception of the first 3 largest cogs, the remaining 8 cogs are individual which could mean damage to light weight freehubs as is often seen from split cassettes. SRAM did cut some weight on the cassette by pinning the 42t to the adjoining gears, but there’s only so much you can do with a full steel cassette. If the cassette ends up being the most exciting piece, the NX X-Horizon derailleur is surely second on that list. On the surface, the NX model is an entry level 1x derailleur, but in reality it is a crazy affordable replacement for any SRAM 11s 1x group. Fully compatible with all of their X-Horizon based shifters, the NX includes a surprising number of features for $74. It still includes a Type 3 roller clutch, their Cage Lock feature, and 12 tooth X-Sync pulley wheels . Just about the only difference between this unit and its more expensive cousins are materials and the lack of sealed cartridge bearings. Again, the derailleur is lighter than claimed (314g vs 322g) and it’s close to the weight of more pricey models compared to the cassette. To go along with the derailleur, there is an NX shifter. Naturally, the 11 speed shifter borrows from previous generations with X-Actuation and is again compatible with all other SRAM 11 speed 1x drivetrains. The shifter is pretty basic with zero adjustments available for the levers, but it offers a similar form factor for $27 which includes a shift cable. SRAM is on a roll with their weights – even with the cable, the shifter came in under claimed at 140g vs 142g. 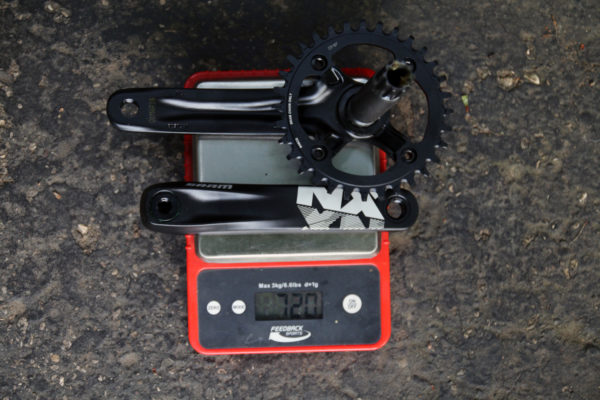 The group also includes a new PC-1110 chain, though our review group was sent with a PC-1130. The $14 (!) PC-1110 will work with all SRAM 1×11 groups and still includes their PowerLock connection with a solid, chrome hardened pin construction and a claimed weight of 232-273g. There is no doubt when riding the NX group that you are on a more affordable drivetrain, but all things considered, SRAM did an incredible job of making 1x available to the masses here. The group has a decidedly more plastic-y feel which is mostly due to the shift levers, but it doesn’t really detract from the over all feel – which is the precise shifting we’ve come to expect from SRAM’s 1x groups. There is never any hesitation. Just click, pop, and you’re in the gear you want. The group even allows for backpedaling in any gear without the chain derailing which hasn’t been the case for every wide range 1x group we’ve tried. Like other 11-42 cassettes, the 10t cog is missed if you have sustained downhills or do a lot of road riding to the trail head, but the closer steps near the high end of the cassette may make up for it if that’s something that bothers you. Realistically, the weight savings of a 1x group may be gone at this point, but it still offers the simplicity and quiet that we’ve grown to love from ditching the double (not to mention room for a better dropper lever). While the group’s weight may have adopters thinking twice, the affordability and interchangeability with other SRAM 1×11 groups will likely cause NX to work as a gateway group to future 1x customers.