Getting rolling in the new year, pro mechanic Yanick Gyger offers some pretty detailed suggestions on how to set up your suspension like a seasoned ace. Yanick-the-Mechanic has worked for years with multiple XC World Champion Nino Schurter dialing the mountain bike legend’s suspension setup. And while he says “there is no secret to setting up your mountain bike’s suspension correctly”, there are plenty of real tips and tricks that Yanick uses to getting dialed.

How to Set Up your suspension with Yanick the Mechanic

No secret, but “Once dialed, your suspension will make the difference on the trail. Lead mechanic for the Scott-SRAM MTB Racing Team, Yanick broke down his suspension setup tricks & tips for Scott and their latest How-To series.

As one of the most experienced mechanics on the World Cup XC circuit, Yanick breaks down his insights into Nino’s suspension setup. He’s not going to come dial your bike in, but here are some of his suggestions how to get the most out of your own bike. His first suggestion is to zero out your settings before you get started. Dial out both rebound & compression damping to their most open & neutral settings (typically counterclockwise) so the damping circuits aren’t affecting the movement of your shock or fork. Only then should you pump up air suspension to the ideal pressure, and set to recommended sag (with all of your riding gear on). If you are looking for a more aggressive setup with a more progressive end of travel, you should go back and start over, experimenting with the addition of tokens or spacers. The from a neutral setup with correct sag, it’s time to first set compression damping, adding more a little bit at a time if you feel the need to further firm up your suspension. Next, rebound damping with a bit more trial & error. Start on the road, then move into more technical terrain, adjusting until you feel comfortable that the suspension rebounds quickly enough without feeling like a pogo stick. Yanick recommends setting fork rebound a bit faster than the rear end. Then carrying a shock pump on your next few rides to make small pressure changes if you feel the need to adjust setup (apparently rather than just playing with rebound & compression damping dials out on the trail.) 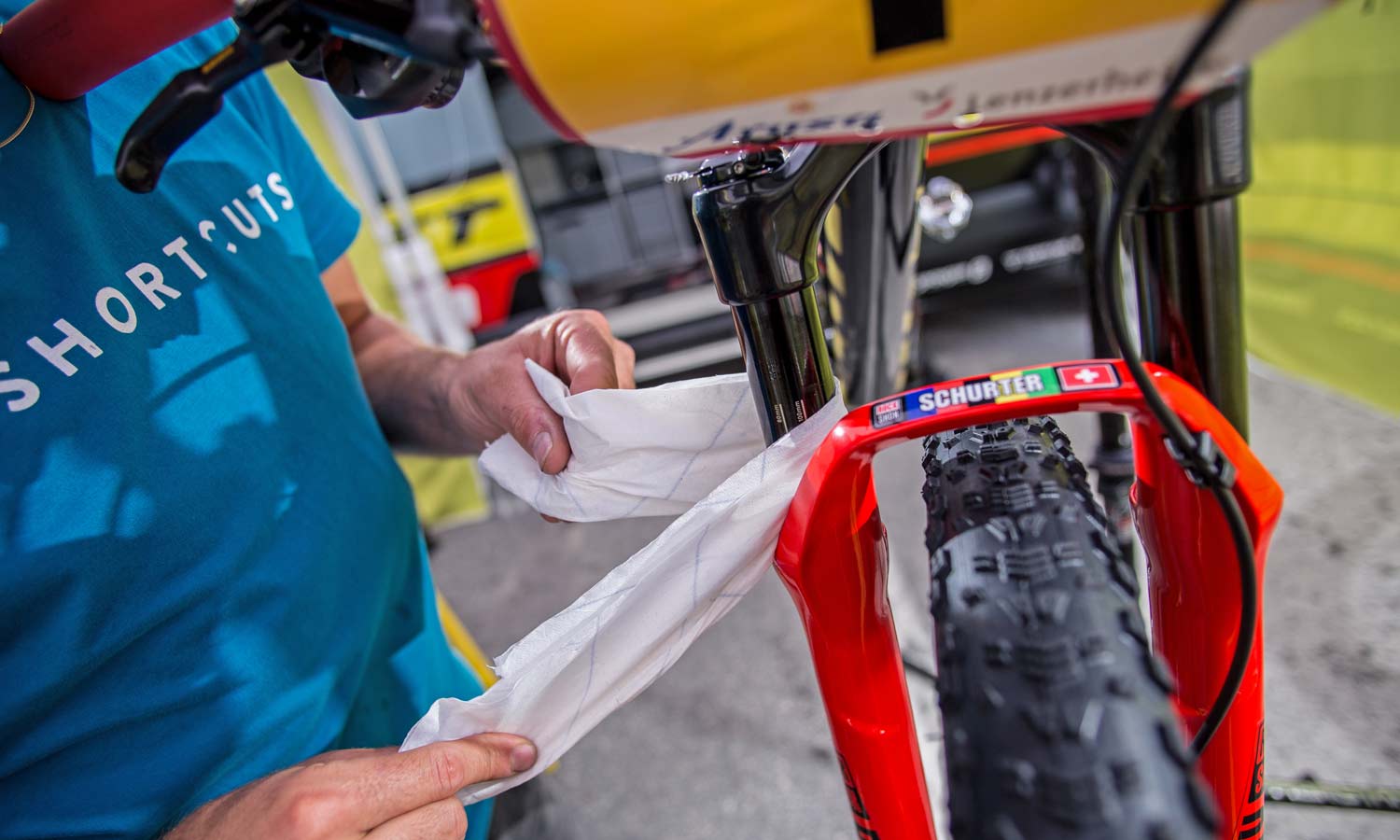 Once set up, of course you have to keep you suspension tuned. In our Suspension Tech series we’ve talked about the virtues of maintenance. But this is surely something many riders neglect once everything is running smoothly from the start. Keep forks & shocks clean and lubed, wiping seals with a suspension-specific or silicon lube using a clean paper towel, then cycling the bike through its travel and wiping away any excess. Yanick recommends a full service of suspension internals after “80-150 hours of riding” or at least once a year. Of course Yanick also has some unique insights, sharing the preferences of World Champ Nino Schurter who prefers to race a full suspension bike to maximize control on any trail. It lets him push harder, recover more mid-race, and “he can choose faster and more technical lines.” Nino also likes his suspension supple & progressive. “We have as many air volume spacers in the fork as possible, which allows us to lower the pressure a little bit. This creates a lot of suppleness and sensitivity for small bumps but ramps up deeper in the stroke to handle the big jumps, especially when he is doing his tricks in the air. The rebound is on the faster side and the compression is fully open. In addition, the suspension is very balanced so the fork and the shock work pretty much equally.” “Nino’s settings for his fork start at 78psi with the maximum amount of volume spacers and his rear shock starting at 135psi. For rougher tracks with more roots he prefers more pressure, but for smoother tracks he prefers less pressure.” Using Scott’s 3-position two-in-one TwinLoc remote lets Nino keep suspension supple, while still getting the ability to lock out both fork & shock for smooth climbs, shift to a mid-level compression damping for more varied terrain, and fully open for bombing descents. Oh, and while you should service your suspension at 80+ hours, Yanick gets inside on Nino’s fork & shock to clean them out after every 10-15 hours of riding. Check out a more detailed look at suspension setup with Yanick over at Scott’s website, including some more World Cup race analysis of when Nino uses his TwinLoc, plus a glossary of setup variables & how adjusting them dials in your suspension setup.