Debuted just before last cyclocross season, the kinked top tube of the Canyon Inflite CF SLX has made the carbon cross bike hard to miss (if at times divisive for its looks). It also doesn’t hurt that current World Champion Mathieu van der Poel continues to race the CX bike, winning just about every time he shows up on a start line. So, of course the World Champ gets a custom painted bike. And in due fashion, he rode the rainbow painted Canyon to a win this weekend for his first World Cup appearance of the season. Plus, we spotted another couple custom painted champion-edition Inflites… We’ve seen the tech for the lightweight (940g claimed) hi-mod carbon bike before. Canyon calls the Inflite CF SLX a race-ready, stiff bike that can handle all of the abuse of cross racing. And UCI number 1 van der Poel does a good job of backing that up with wins. For the most part van der Poel races what appears to be a stock Inflite CF SLX, with only a few modifications beyond the custom wind-swept rainbow paint scheme. Shimano Dura-Ace Di2 R9100 is the drivetrain of choice for van der Poel, sticking with a closely spaced, pro-only 46/39  double chainring setup. Interestingly, most of his bikes that we saw appeared to be fitted with Shimano Dura-Ace R9100 dual-sided power meter. The unique thing about that is like most top-level cross racers, MvdP does not compete with a cycle computer mounted to his bike, since he’s often going to be changing bikes up to one or two times per lap. So, possibly he has a device in a pocket under his skinsuit if he’s collecting power data while racing, which would be paired to all of his power meters?

MvdP also has a couple of unusual protective covers on most of his D-A cranksets. The majority of each crankarm & spider is covered with a pretty common anti-scuff protective film. But the end of his cranks also look to get a custom bit of carbon fiber glued over the end. Since van der Poel tends to hop over barriers in lieu of running over them, this likely offers a bit of extra protection if he botches his hop? Following on Canyon’s integrate cockpit approach, van der Poel’s race bikes are fitted with one-piece bar & stem combos. But he doesn’t ride the comfort-focused H31 Ergocockpit that Canyon stocks on the Inflite CF SLX, but instead the more aggressive H11 Aerocockpit that was developed for their Aeroad bike. Plus, a matching but unnumbered training bike, which was the only one to sport the integrated out-front GPS mount. Pairing nicely with his #1 race number, MvdP looked preferential to bike number one, reconning the course, warming up & starting the bike on numero uno. In the meantime, a number of bikes for both Mathieu and older brother David van der Poel sat waiting at the ready in the Depo. But, with a decent amount of mud on the lower part of the Tabor World Cup course, he was happy to change bikes throughout the race. Taking freshly cleaned bike after bike as he moved up through early traffic from his third row start (having not raced the first three World Cup CX races), MvdP made his way back to the familiar front of the race – which actually made the racing more entertaining for fans than his typical off-the-front approach. 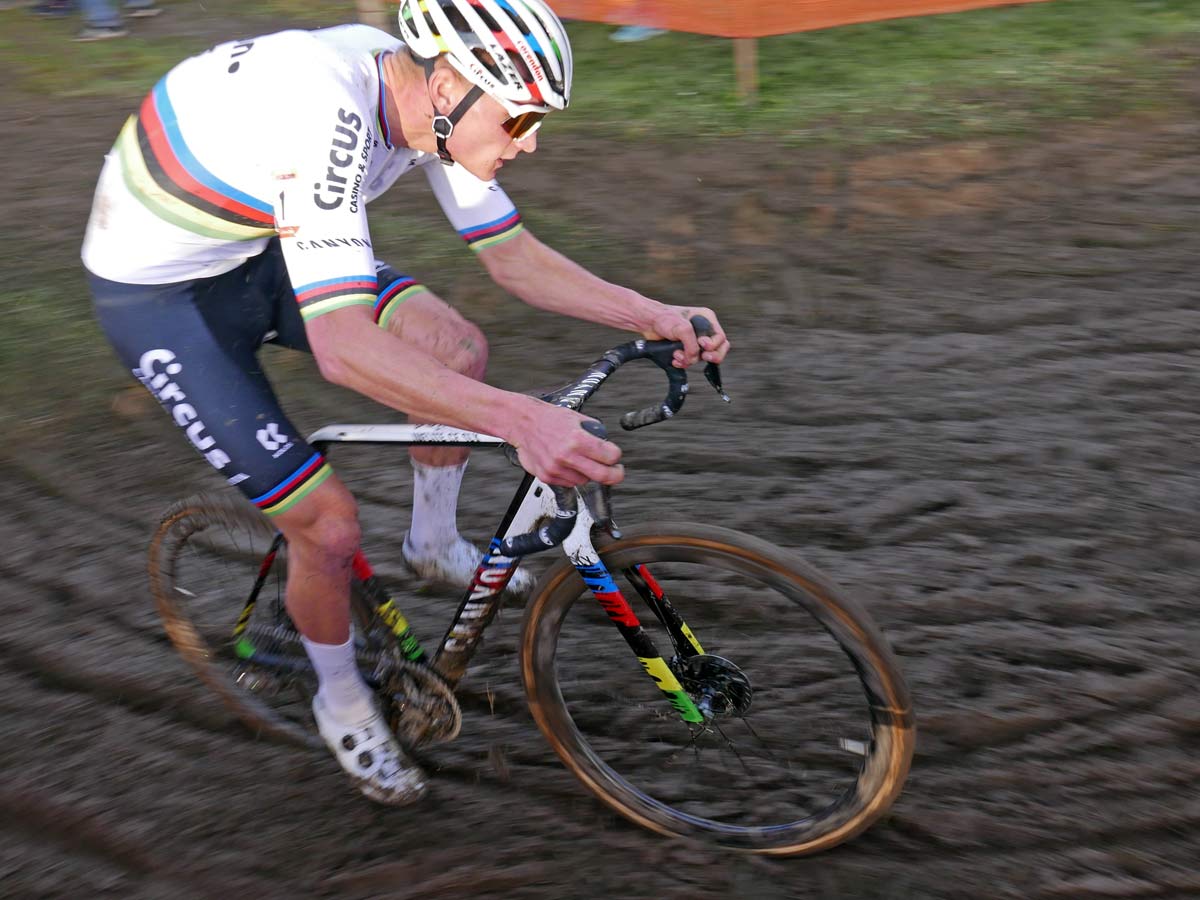 In the end, MvdP rode his rainbow Inflite to the win, finally opening up a gap on the last lap.

Other custom painted Canyon Inflite CF SLXes out there… MvdP isn’t the only Corendon-Circus champion riding a Canyon, and we spied at least two others with custom champion’s paint jobs. German elite men’s national champion Marcel Meisen also got some subtle black red & yellow stripes to celebrate his title. And Dutch rider Ceylin del Carmen Alvarado (who finished second in the elite women’s Tabor race) recently won the U23 women’s European championship, justifying the blue stripes & yellow stars on her Inflite, even though the elite women & U23 women shared a single race in Tabor. Mathieu van der Poel also won at those European Championships, by his rainbow stripes definitely get priority.