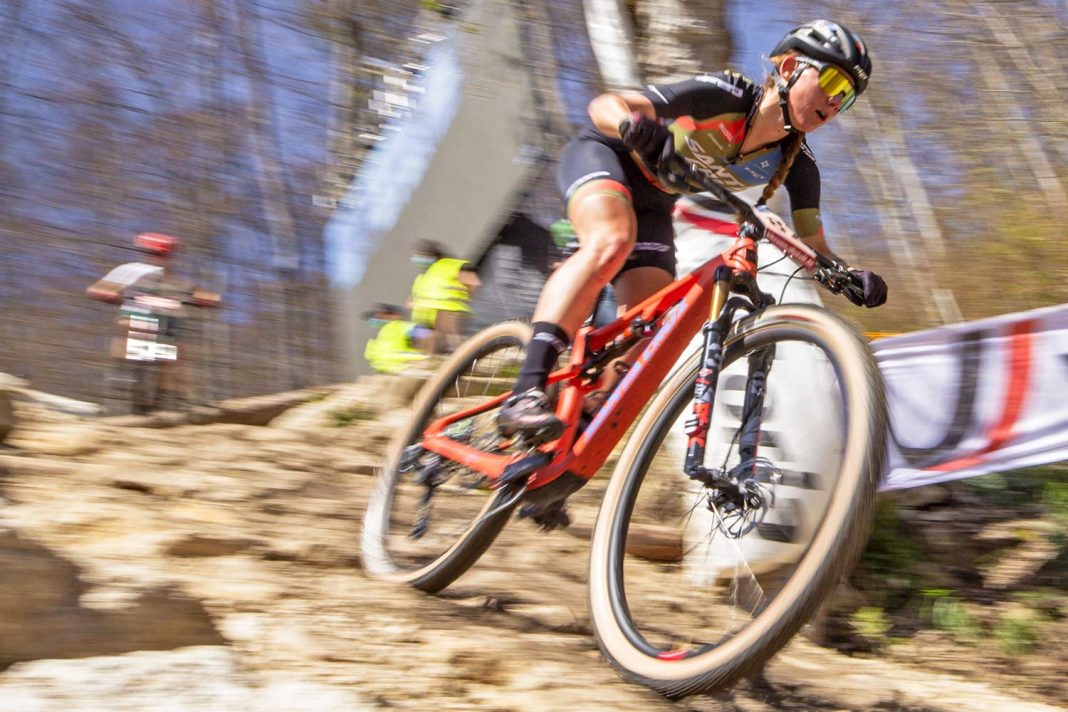 Santa Cruz hasn’t had a Superlight XC bike in the lineup for years, but that’s exactly what this prototype looks like. Getting raced now by the Santa Cruz FSA team on the World Cup cross-country circuit, the all-new lightweight carbon race bike has a familiar high single-pivot, now getting a linkage-driven shock. Complete details remain limited, but Santa Cruz doesn’t seem to be keeping a tight lid on the project, with the highly-visible new orange XC bike popping up all over the team and riders’ social media accounts since its race debut in Albstadt last weekend…

It’s actually been almost a decade since that last alloy single-pivot Superlight introduction I can remember, and the carbon VPP Blur had already long taken over top XC bike duties by that time. But while the Blur XC 29er has continued to see updates over the years – and was being raced at the top level until this past week – there’s a new Santa Cruz in town.

Santa Cruz’s long championed VPP short-link four-bar suspension is out, and this new XC race bike goes back to a high single-pivot design. The question remains… will it be a Superlight, will it be superlight, or could it be a Super Blur? 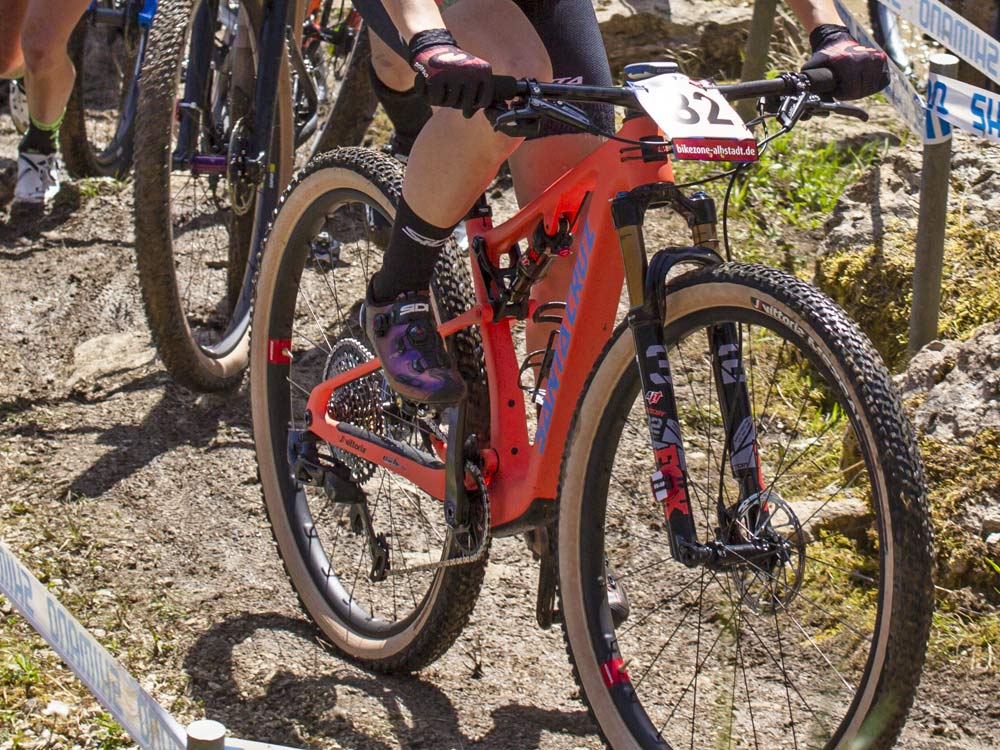 The entire Santa Cruz FSA pro racing team led by Maxime Marrotte were on the new bike for the first round of the UCI XCO World Cup over the weekend. And thanks to their photographer Enrico Andrini, we have plenty of good views of the new orange prototype team bikes.

What we can see is a lot of similarities in the carbon front triangles, comparing the current Blur to this new Superlight Blur prototype. It gets the same horizontal shock layout driven by a linkage under the seat cluster, and overall shaping that looks very familiar. 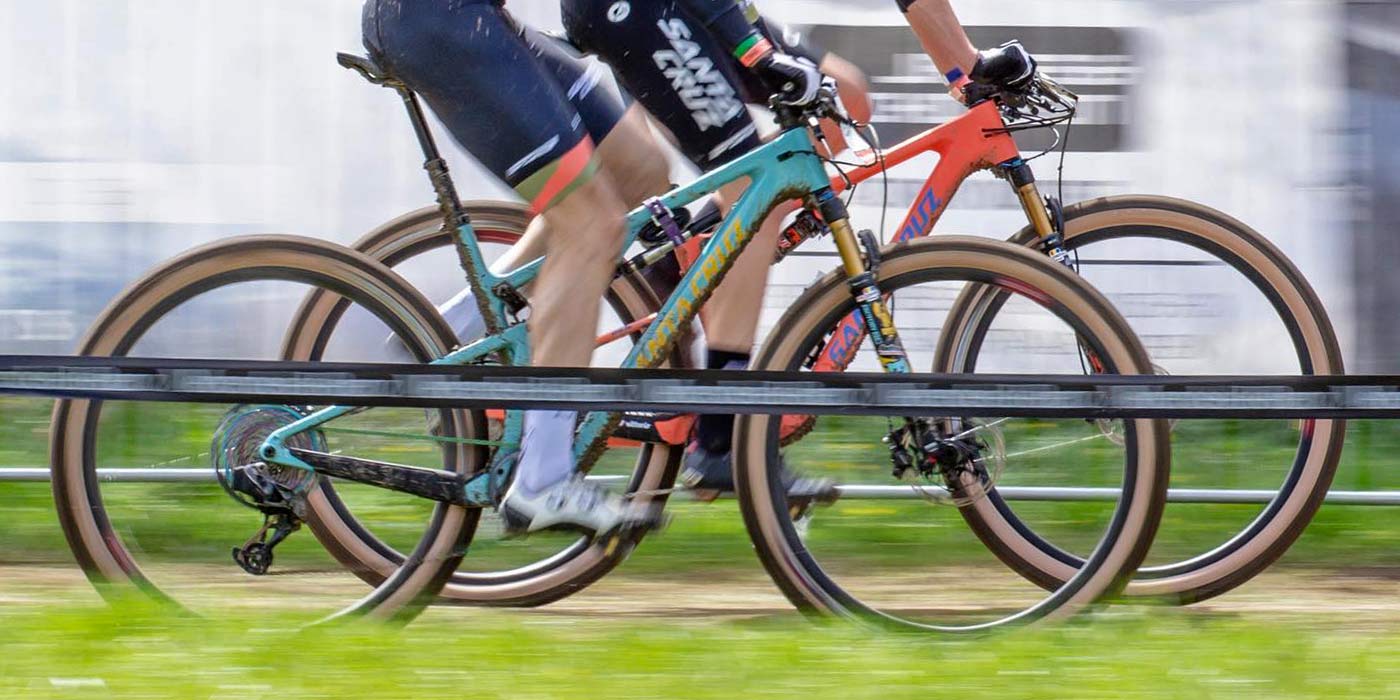 Putting the two bikes side-by-side (current Blur in blue vs. prototype in orange), geometry on the prototype appears similar to the current Blur, which makes sense as that bike is already quite modern in XC geometry terms. 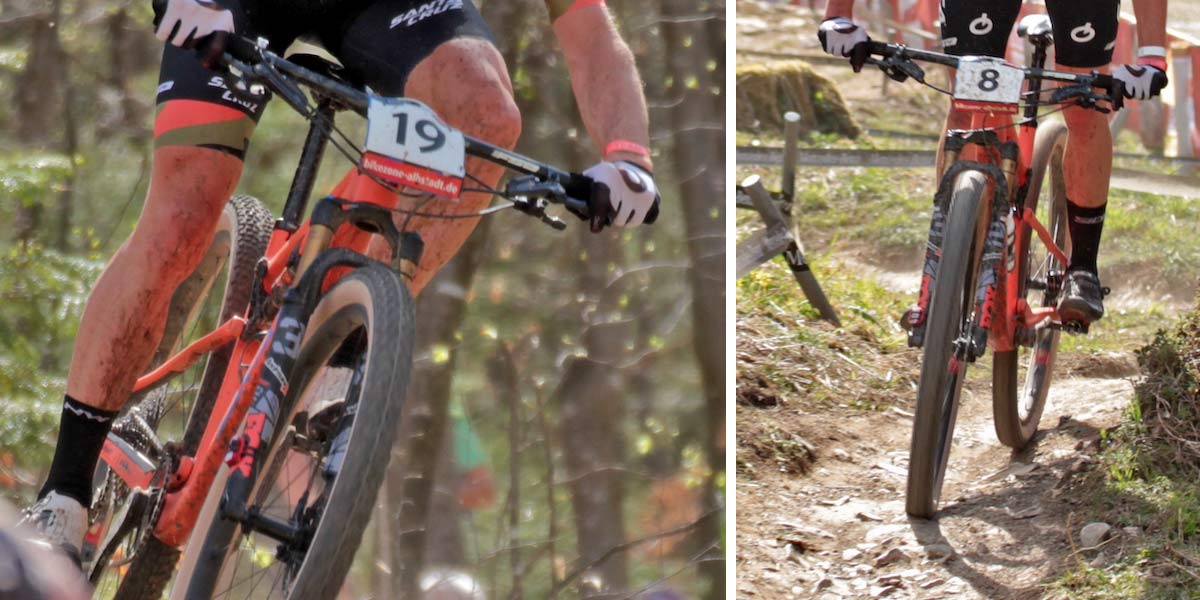 Of course, the big differences are in the rear end, with this prototype ditching the lower link and opening up the rear stiff triangle of the Blur. The result is a wide-set high main pivot just above the bottom bracket, that appears to be even higher than the top of these pro racers 32T chainrings.

Chainstays drop down on the 1x-only bike to get around the rear tire, and includes molded-on protection. There’s also a small adjustable chainguide that appears to be mounted just behind the pivot. A thicker stub of the seatstay starts up from the rear dropout, then transitions quickly into a wider flattened shape to allow for the flex needed to drive the shock linkage. For now, that link appears to be a machined-out alloy link, but it’s possible Santa Cruz could go to carbon by the time this bike hits the market. 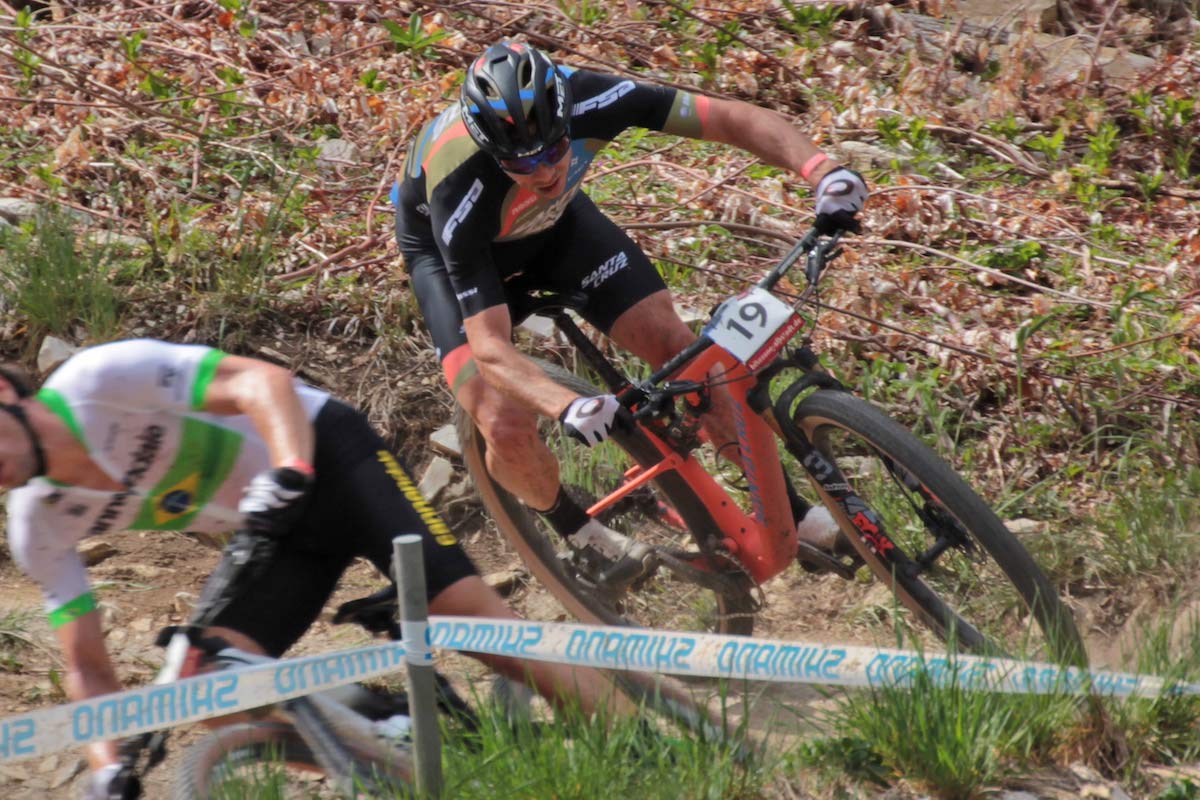 The other big feature we spot is the extended section of the downtube (with integrated protection) in front of what appears to still be a threaded bottom bracket. That has made room for two full-size water bottles, and a 3-pack of mounts on the downtube so riders can set a single bottle lower.

The Santa Cruz FSA team ride SRAM AXS wireless groupsets, so there’s an extra open cable routing hole in front of the bottom bracket, but we don’t yet see where a mechanical rear derailleur cable will be routed – potentially external along the chainstay. This prototype bike does not seem to use modular routing ports, but does have ports on both sides of the headtube to route the rear brake exiting at the BB & re-entering the chainstay), a stealth dropper, and a rear shock remote lockout.

What about a prototype wider Reserve wheelset to match a new XC bike? 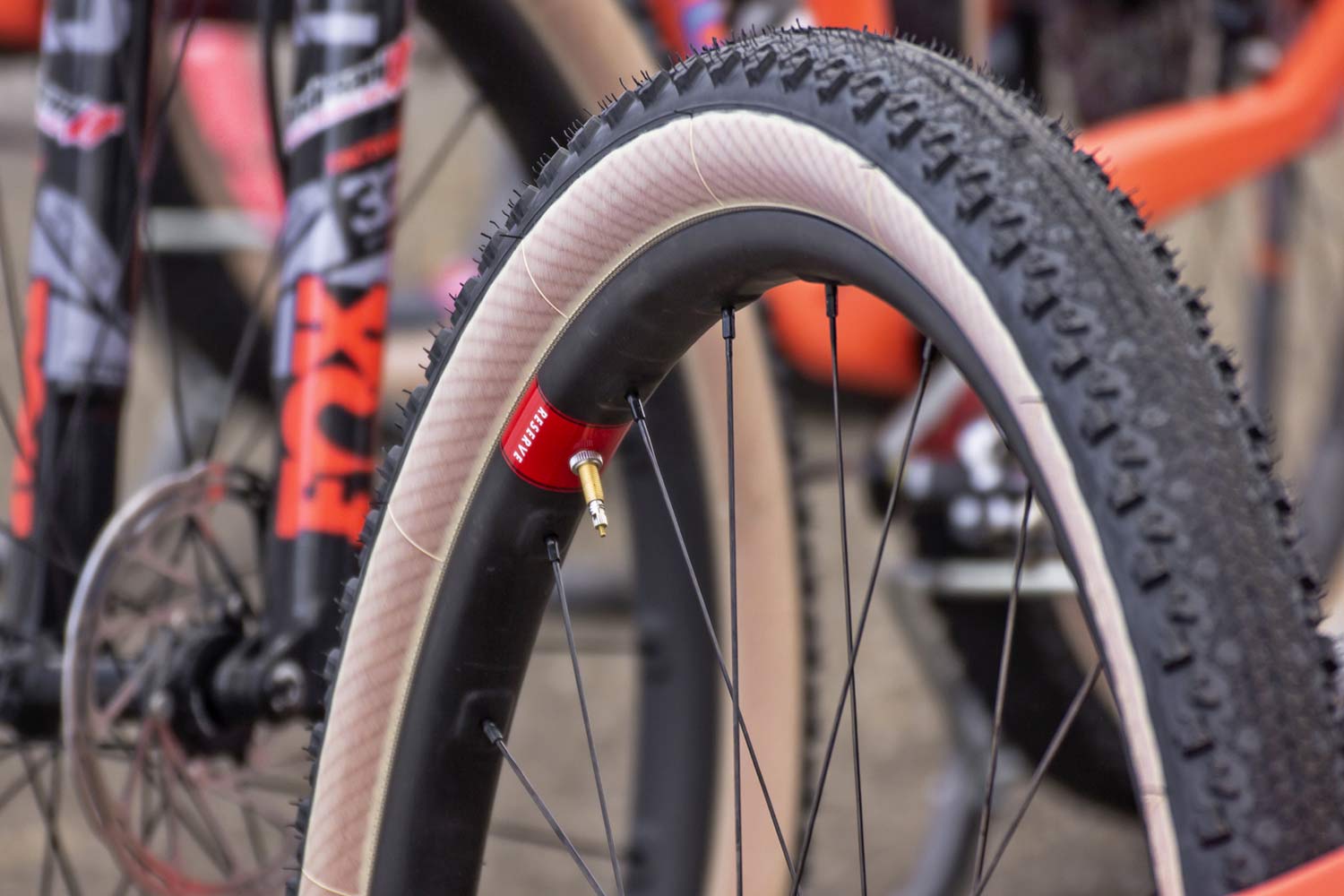 I may be going out on a limb, but that rim looks wider than the current cross-country Reserve 25 or even the trail-focused Reserve 27 wheel that come out of the Santa Cruz family – the team’s wheels do have new labels, we just can’t quite see how wide they are yet. Reserve says their 1587g Reserve 25 is proven on the World Cup, and that the 1735g Reserve 27 is built more for trail riding. While riders now are running larger volume tires, we can’t imagine these XC pros are running their lightweight 2.25″ Vittoria XC tires on a EWS-ready 30mm internal rim. I’d guess the new Superlight is going to get some suitably light wider Reserve carbon wheels too…