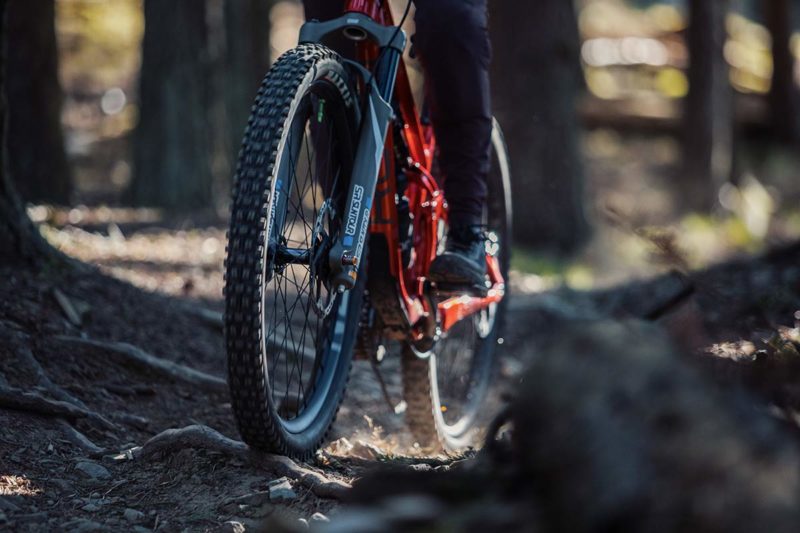 By far and away the most expensive tire inserts on the market are CushCore Pro, priced at an eye watering $149 per set. That’s a lot of dollars for some puncture protection, right? But that’s the point, these tire inserts offer far more than just anti-pinch flat protection… 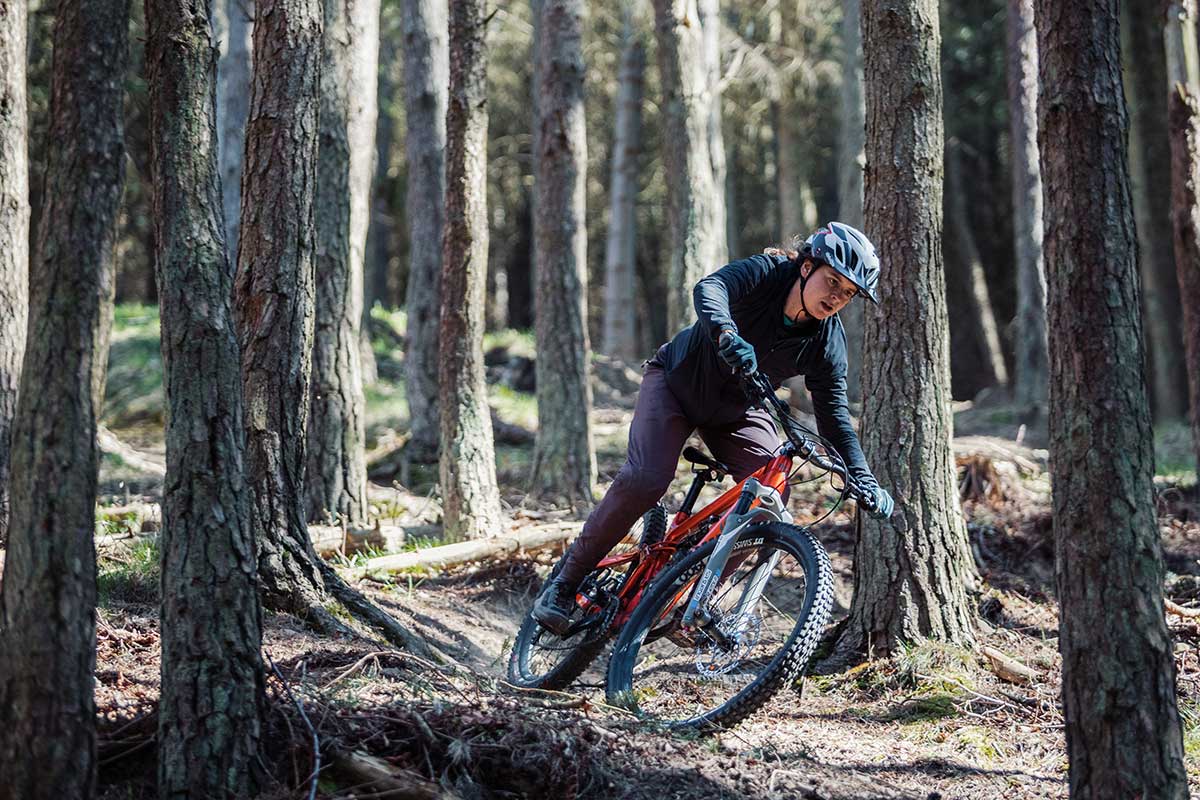 The number of accolades associated with CushCore is quite frankly astounding, particularly on the Downhill circuit. The brand and its athletes have claimed 7 Downhill World Champion Titles and 20 World Cup Downhill Wins. It seems the Loic Brunis of this World get on with the product; at least, it certainly isn’t holding them back.

That’s all well and good, but can something that adds 263g per wheel have performance benefits for us mere mortals? My experience over a three-week period would suggest it can. Here’s why I think CushCore is one of the best upgrades you’ll ever make to your bike. 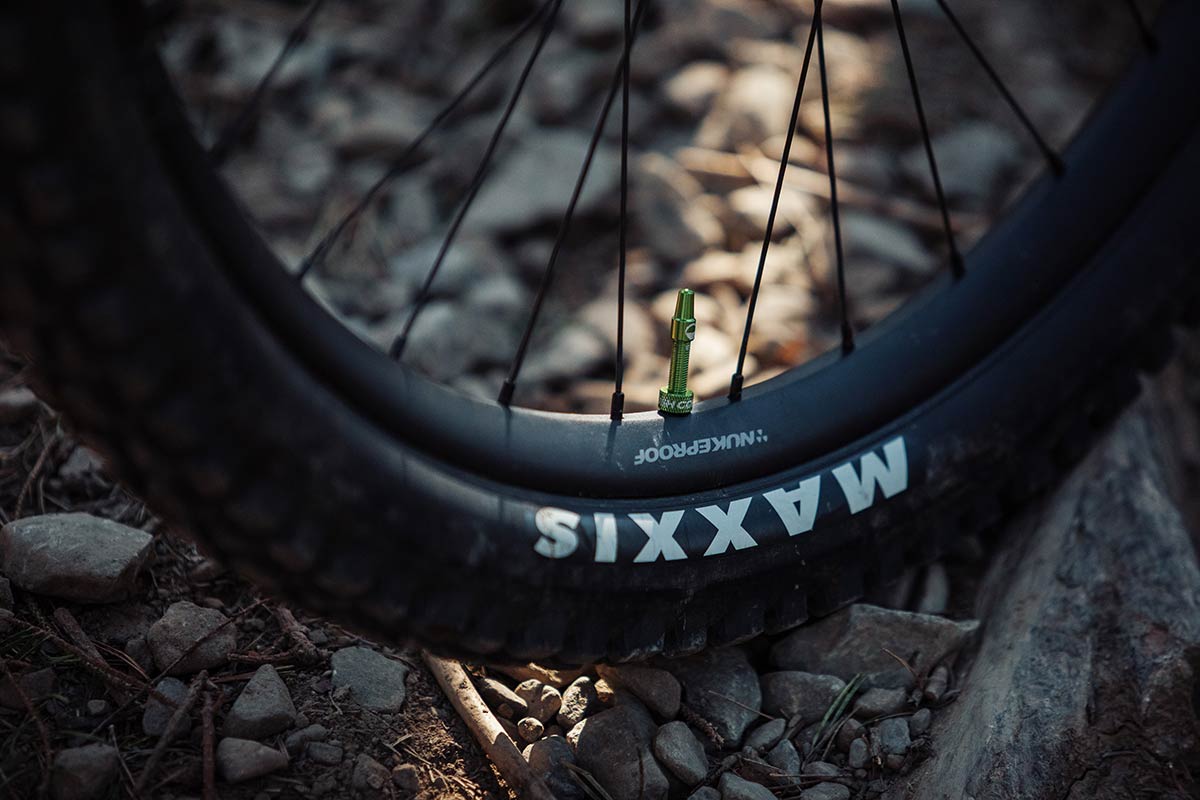 Some of the above-mentioned claimed benefits of CushCore, with the exception of “no tire roll” and the rim and puncture protection stuff, can largely be achieved by dropping your tire pressure a little. I refer mainly to the increased traction, reduced rider fatigue and a smoother ride. 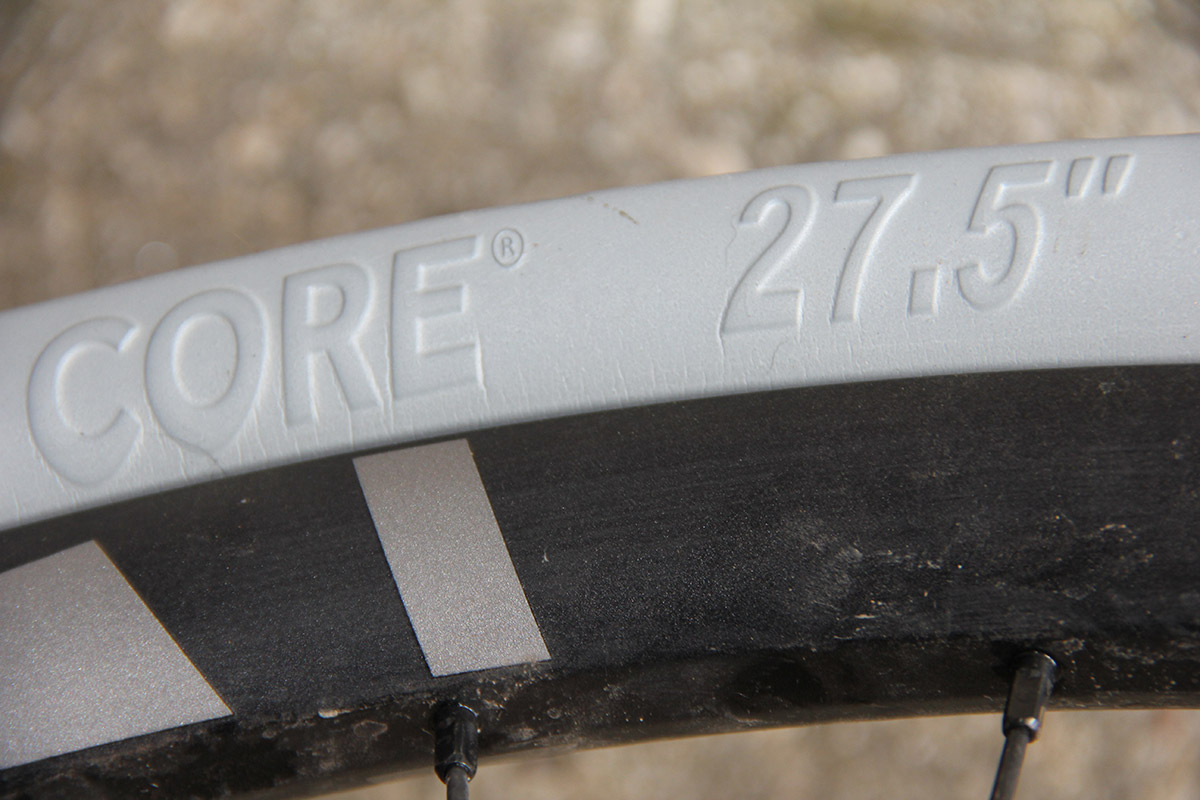 The issue of course is that, by dropping your tire pressure, you leave yourself at risk of a number of undesirable consequences; pinch flats, dinged and/or cracked rims, tire roll, tire burp and, on occasion, ripping the tire off the rim entirely. The point here is that, with CushCore Pro, I’ve been running obscenely low tire pressures without flatting (largely… more on that later).

CushCore market their product with a tonne of both in-house laboratory testing and independently acquired experimental evidence backing up their claims. In these test scenarios, whether testing rolling resistance, impact protection or vibrations, a standard tubeless tire was pitted against that same tubeless tire running a CushCore Pro insert; crucially, both tires were running the exact same pressure. Before we get into the nitty gritty of my experience, let’s take a step back and look at the tech specs of the CushCore Pro Tire Inserts…

CushCore Pro: The Specifications and Installation 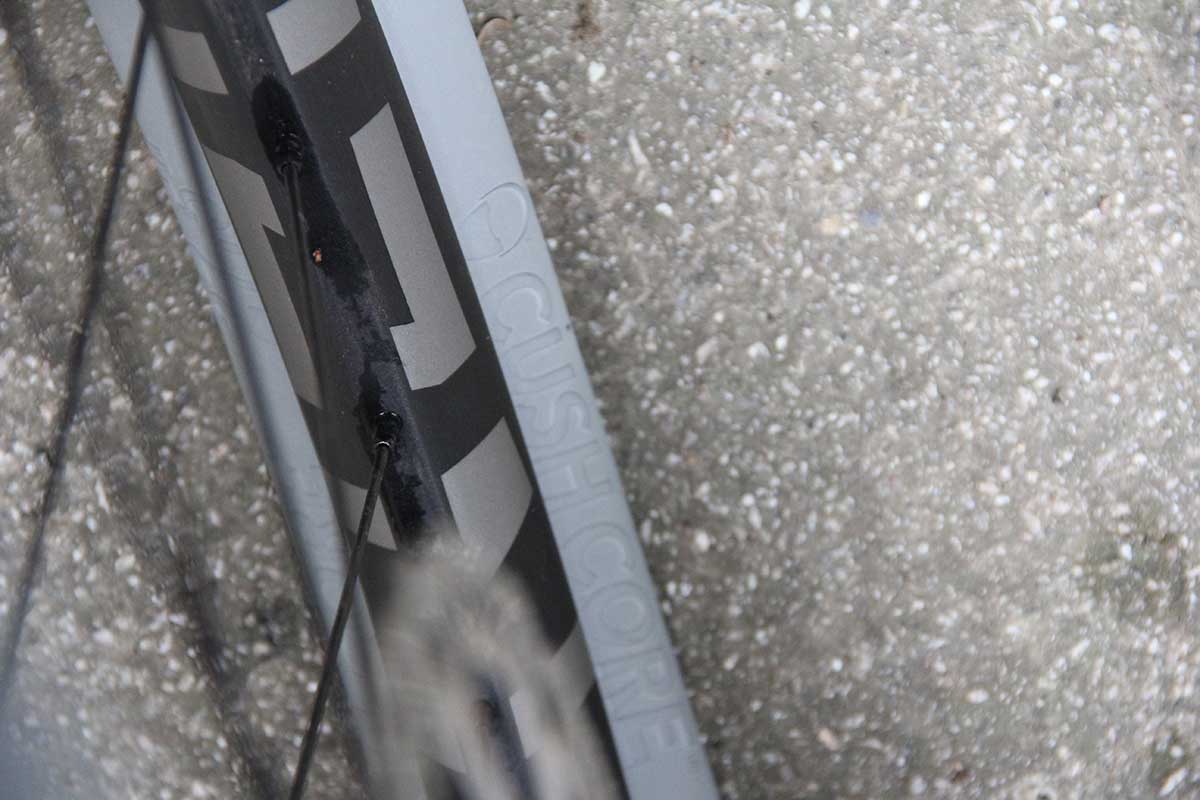 CushCore Pro Tire Inserts are marketed at Trail, Enduro and Downhill applications, recommended for rims with an internal width of 22mm-35mm, and tire widths of 2.1″ to 2.6″. We measured the inner rim channel portion of the insert at 22mm wide, so fitting these to rims any narrower than that is unlikely to be viable. 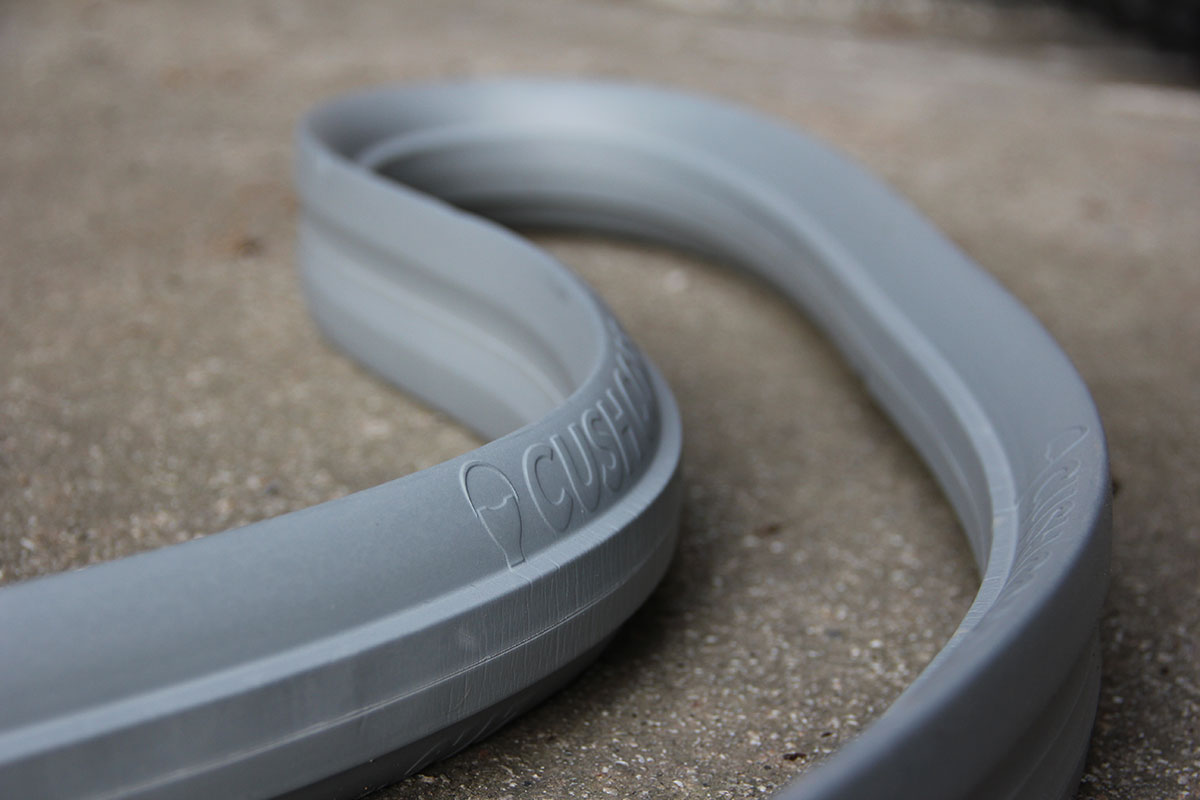 They’re made up of a closed cell foam, so don’t absorb tire sealant. You’ll see there are two channels on each side of the insert, designed to allow sealant to flow freely. 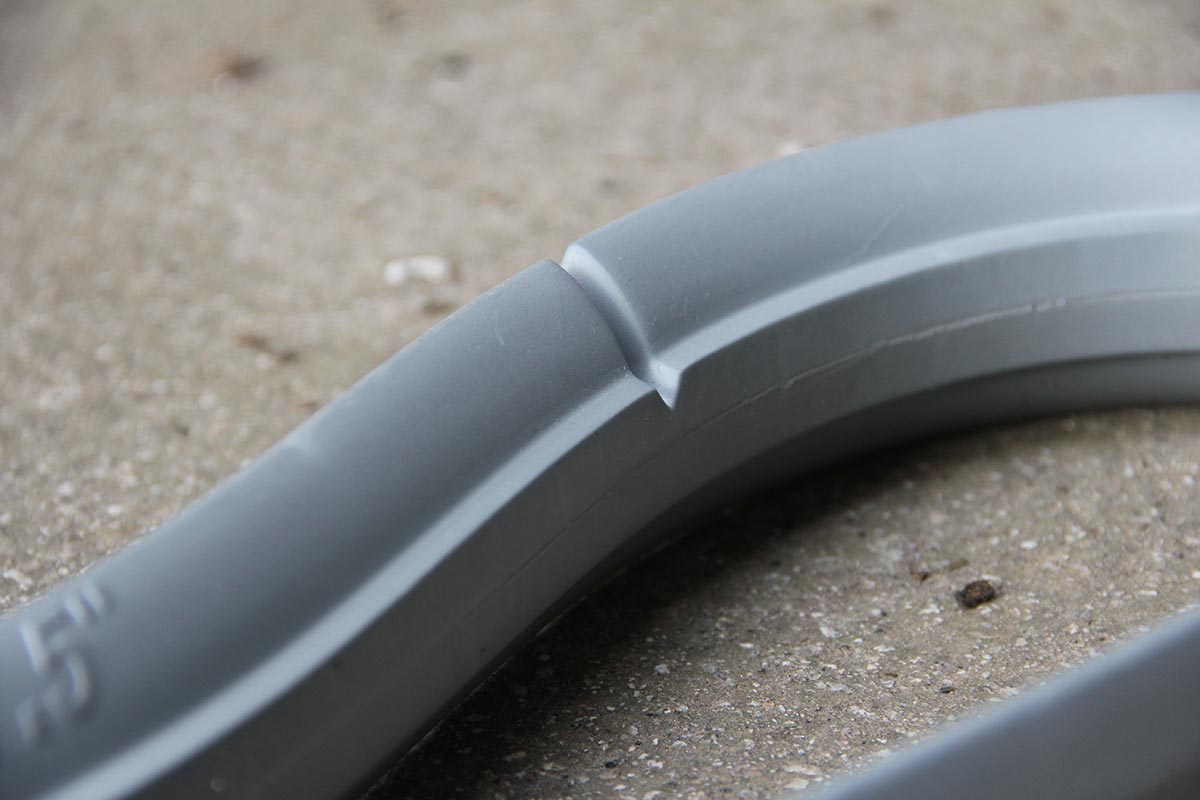 Disclaimer: I didn’t actually install the CushCore Pro inserts myself. I’ve a hand injury from, you guessed it, crashing my mountain bike. To avoid aggravating the ligaments, I trusted Norco Factory Mechanic Lewis Kirkwood to install the tire inserts for me. Thanks to the sealant channels, 30ml was all that was required to seat the tires. 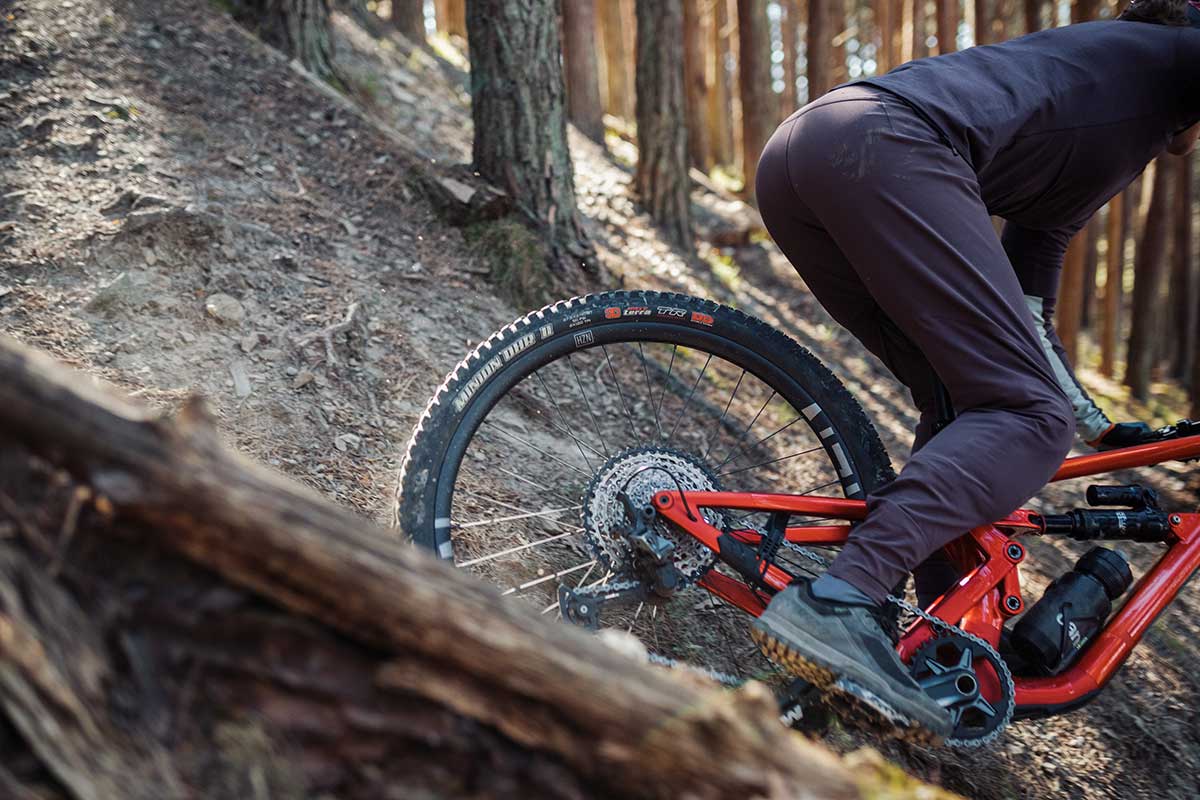 I ran the CushCore Pro front and rear on a 27.5″ Nukeproof Horizon V2 Alloy Wheelset with a Maxxis Minion DHR II Double Down tire on the rear and a Maxxis Assegai EXO+ on the front. So, without any tire inserts, I usually run around 20 PSI in my rear tire and 18 PSI in the front. I’m 60kg soaking wet, so I get away with running pressures that are far below what tire manufacturers recommend anyway.

I heard a lot of hype about CushCore before testing it out for myself. My coach runs a set on his enduro bike, running 12 PSI in the rear and just 8 PSI in the front tire. While he’s a shredder, he’s not a Pro. Lewis Buchanan on the other hand is; he’s been running just 9 PSI front and rear and it made him faster on some of his local tracks; check out that video here.

I digress. The point I’m trying to make is that many riders who try it say you should drop your tire pressure significantly to get the most out of the inserts. So, I went ahead and dumped a load of air, starting out with 12 PSI front and rear; a pressure I wouldn’t dream of running on a standard tubeless setup for fear of tire roll and burp, etc. 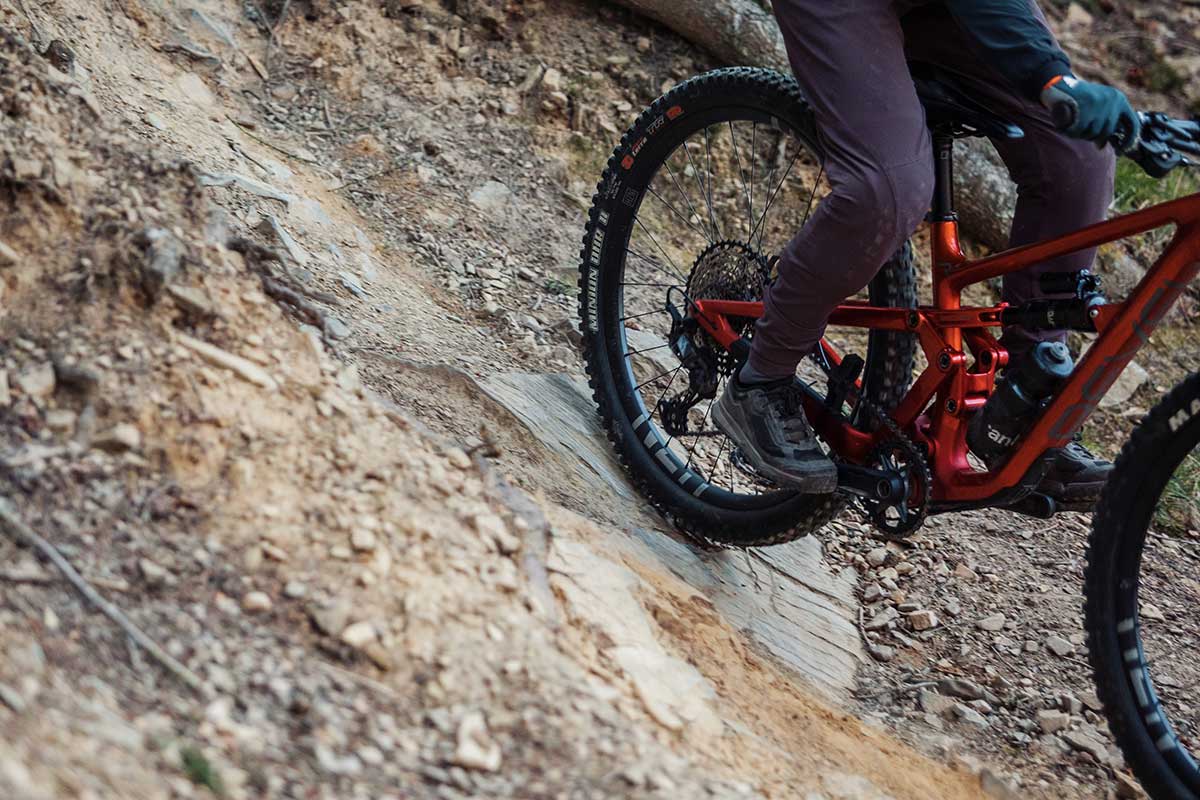 Heading to a local rocky track on a very steep hillside, I got my first ride on the CushCore Pro inserts. I rode tentatively at first, in the knowledge that I had just 12 PSI in each tire. The first thing I noticed was… well, nothing. With the CushCore Pro, I certainly didn’t feel any negative effects of dropping my tire pressures by 40%.

On these short, slow speed, steep tracks, I was unable to get much of a feel for what the CushCore was doing. The bike certainly felt very composed, the ride comfortable, and the traction very good; all things I would expect from running softer tires. It wasn’t until I took to the longer, faster enduro and downhill tracks of the valley that the major benefits of CushCore became evident. 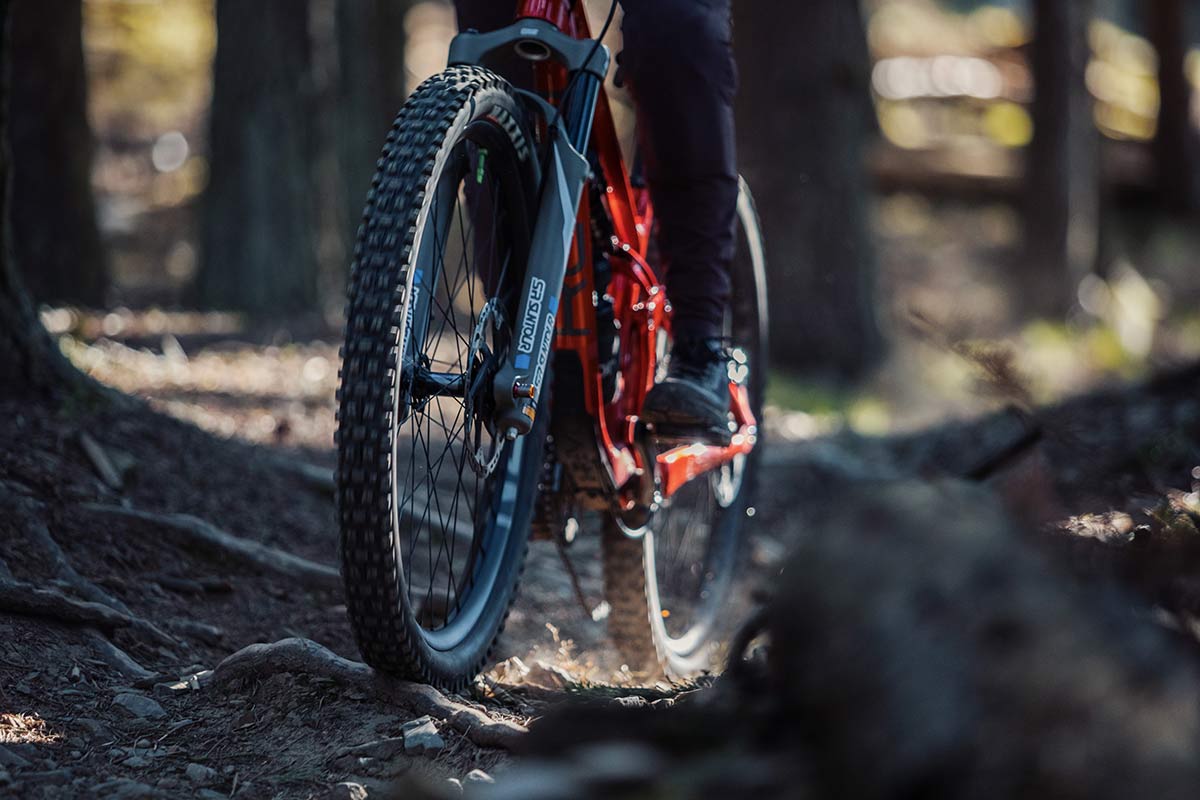 On a 4-5 minute local race track, I was stunned by how much fresher I felt at the end of a full, flat out run. The reduction in fatigue I experienced running CushCore Pro was somewhat incredible. I’m stood at the bottom of the local downhill track thinking “where’s that arm pump I usually have?”, and “why do my quads feel fine?”, and “WHAT IS GOING ON?”. Looking down, I see no evidence of tire burp; no sealant leaking out the sides and rims still happily intact. I’m delighted. 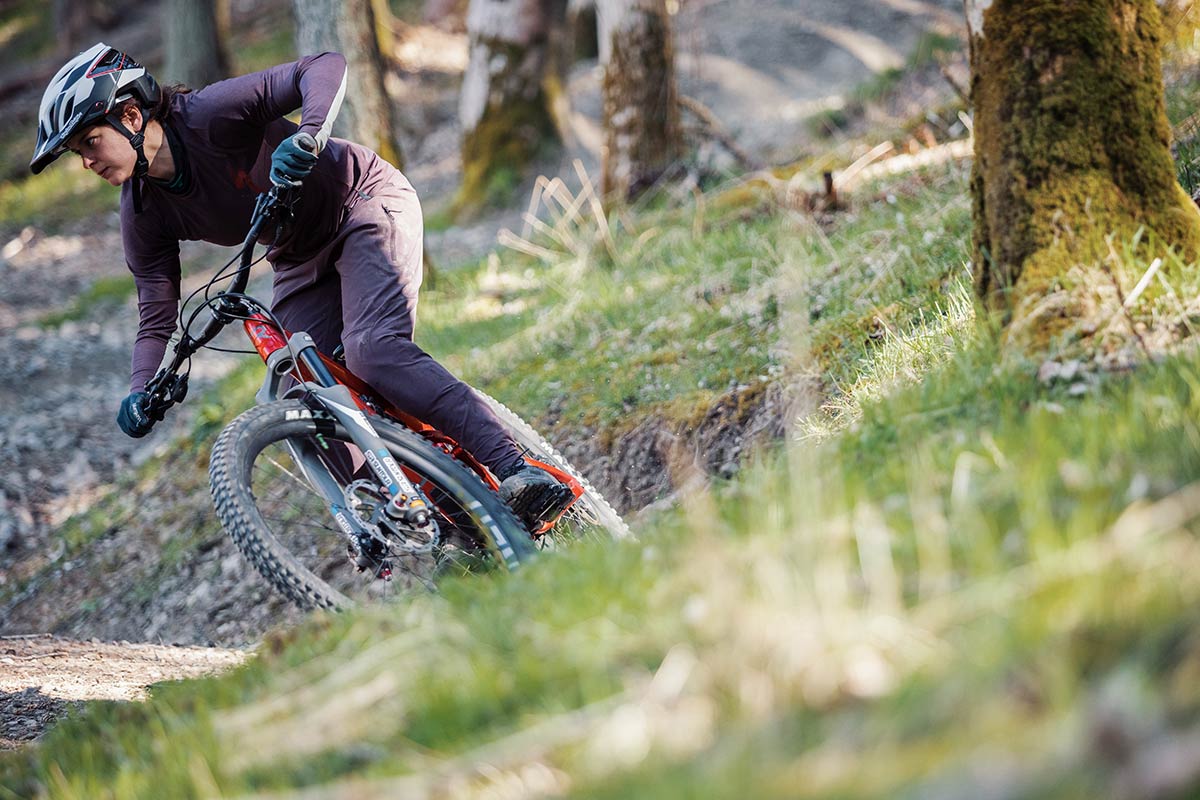 With CushCore Pro, I had no qualms with confidently putting the tire on its edge at 12 PSI – Photo by Finlay Anderson

Traction was noticeably improved too, especially on off camber lines through the loam. I found myself hitting new lines with confidence and composure. To be fair, that could also be as a result of feeling less fatigued, rather than having anything to do with traction. Either way, the feeling of confidence was there and the traction was certainly not lacking. 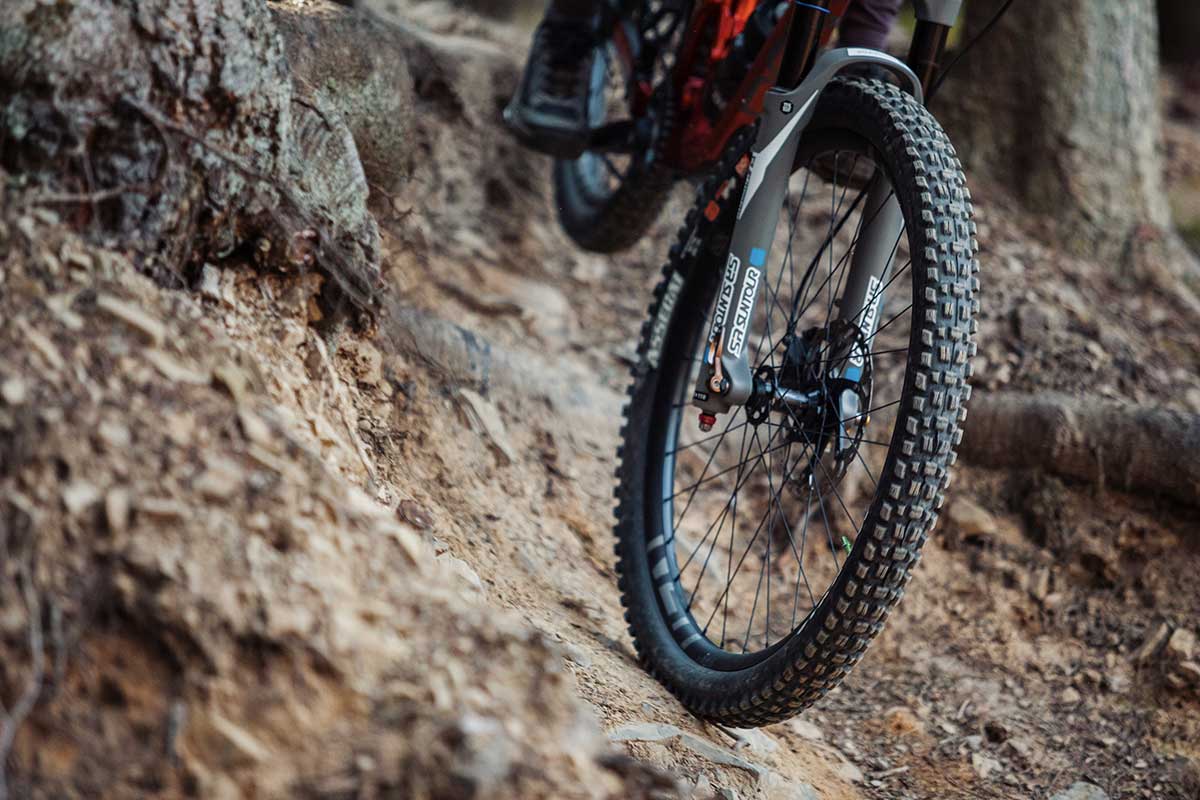 Over rough sections of track, the CushCore was certainly pulling its weight, taking the edge off bigger hits, encouraging me to smash through rocky sections in the knowledge that I:

And that brings me to another point; the CushCore seems to damp the rebound of the tire too. In situations where I’d normally expect to be thrown off line, like when you clip the edge of a chunky rock, I noticed I was able to hold the intended line with composure.

Going back to a standard tubeless setup

You never know what you’ve got til it’s gone, right? While I initially felt the fatigue reducing effects of the CushCore Pro acutely, as I rode the setup more, that “wow” effect wore off as I got used to my new, more comfortable and composed setup. 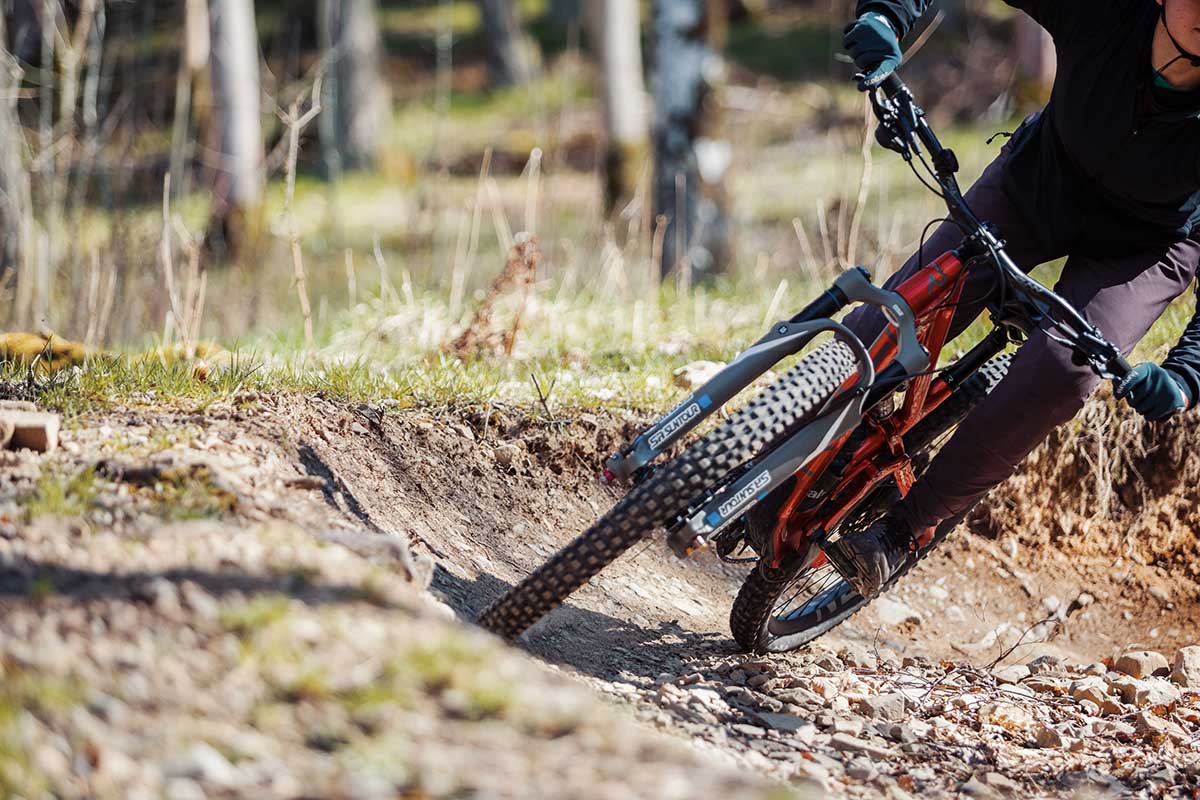 I was in for a shock when I swapped out the front wheel for a standard tubeless setup (no insert). After a 4-5 minute run down one of the valley’s more challenging enduro trails, I found that arm pump, sore triceps and general fatigue had made an aggressive and unwelcome comeback.

The disclaimer here is that, while I kept the same rear wheel (save for increasing the pressure back to ~18 PSI), I swapped out the front wheel for a DT SWISS alloy wheel running a Vee Tire Attack HPL tire, and I increased the pressure to ~17 PSI. So, I may be comparing apples with oranges here. But, based on my riding experience, I’m inclined to accredit the return of fatigue with the lack of CushCore Pro and the very low tire pressures I was able to run with it.

Can I switch out a heavy casing tire for a lighter casing if I use CushCore Pro? 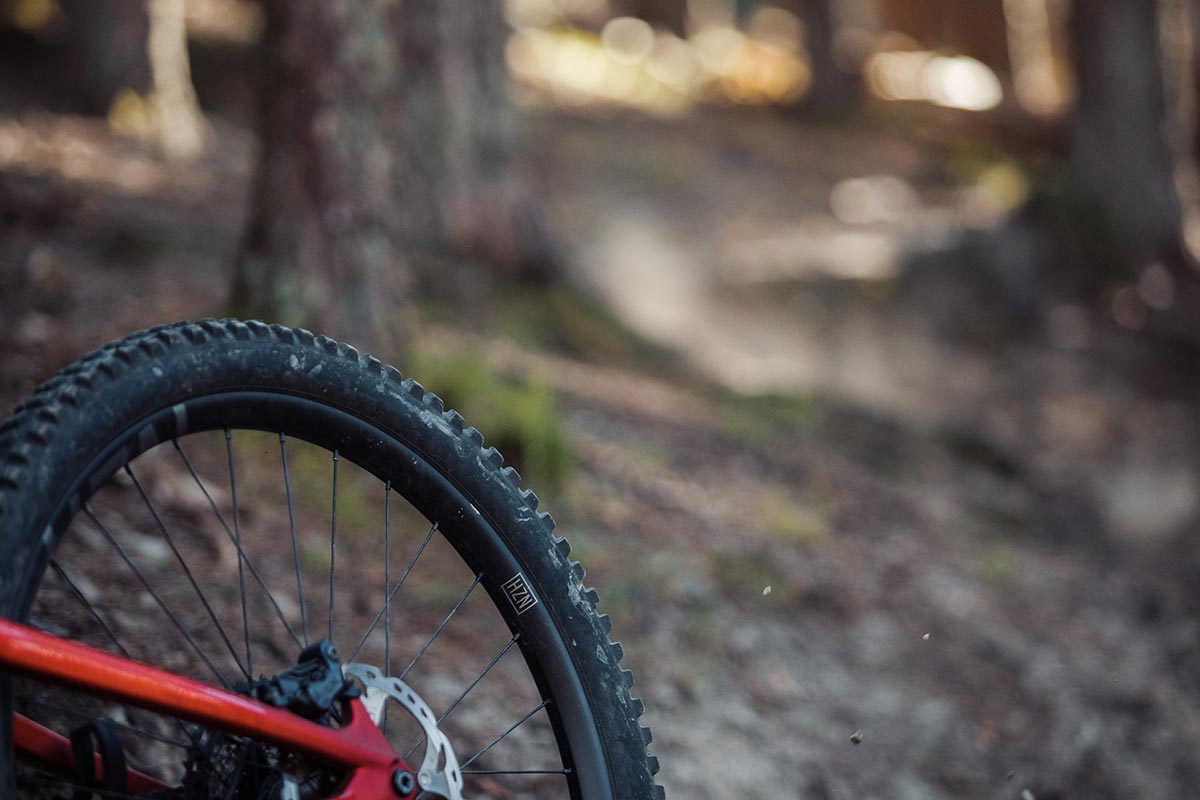 Sadly, no. When I originally published this review after three weeks of testing on a DoubleDown casing tire, I was happy to report that my Nukeproof Horizon V2 Alloy rims were still in great condition. After removing the CushCore Pro from the rear tire and inspecting the foam I had counted no fewer than 22 cuts indicating where the rim had bottomed out on the foam; 16 of those dents were visible on both sides of the foam. Without the insert, several of these would surely have resulted in pinch flats.

More recently, I’ve been running a CushCore Pro on the rear wheel with a lighter EXO+ casing Maxxis DHRII. Running 20-22 PSI, I suffered several pinch-flats on the faster rockier trails of the valley, and on the Fort William Top Chief Enduro Track. The latter experience also put a flat spot in the Horizon V2 rim, too. Having switched back to a Double Down casing, I’ve been puncture-free ever since.

Why don’t CushCore advise customers to drop their tire pressure?

The reality is that CushCore says you can drop some pressure but they stay away from telling people to drop a tonne of pressure. You can see why, too. Most tire manufacturers don’t recommend you run anything below 25 PSI, which is pretty unrealistic for wet climates.

If CushCore were to advise riders to drop their tire pressures by the 40% I did, they’d be opening themselves up to flack if folk went off and ended up damaging their components. In reality, the amount you may or may not want to drop your tire pressure by will vary from person to person, depending on their weight, bike type, riding style and terrain.

CushCore tends to recommend riders start by dropping just a couple of PSI, but explore what works for them specifically.

Can I recommend CushCore Pro?

Unreservedly. For me, CushCore has been one of the best upgrades I’ve made to my enduro bike setup… ever. The major appeal to me, especially as a racer, is the massively reduced fatigue I experience on long, rough descents. Going fast for longer? Yes, please!

Yes, there is a not insignificant weight penalty, but I’m quite happy to pedal the extra ~500g uphill for the traction, grip and fatigue benefits to be had on the way down. 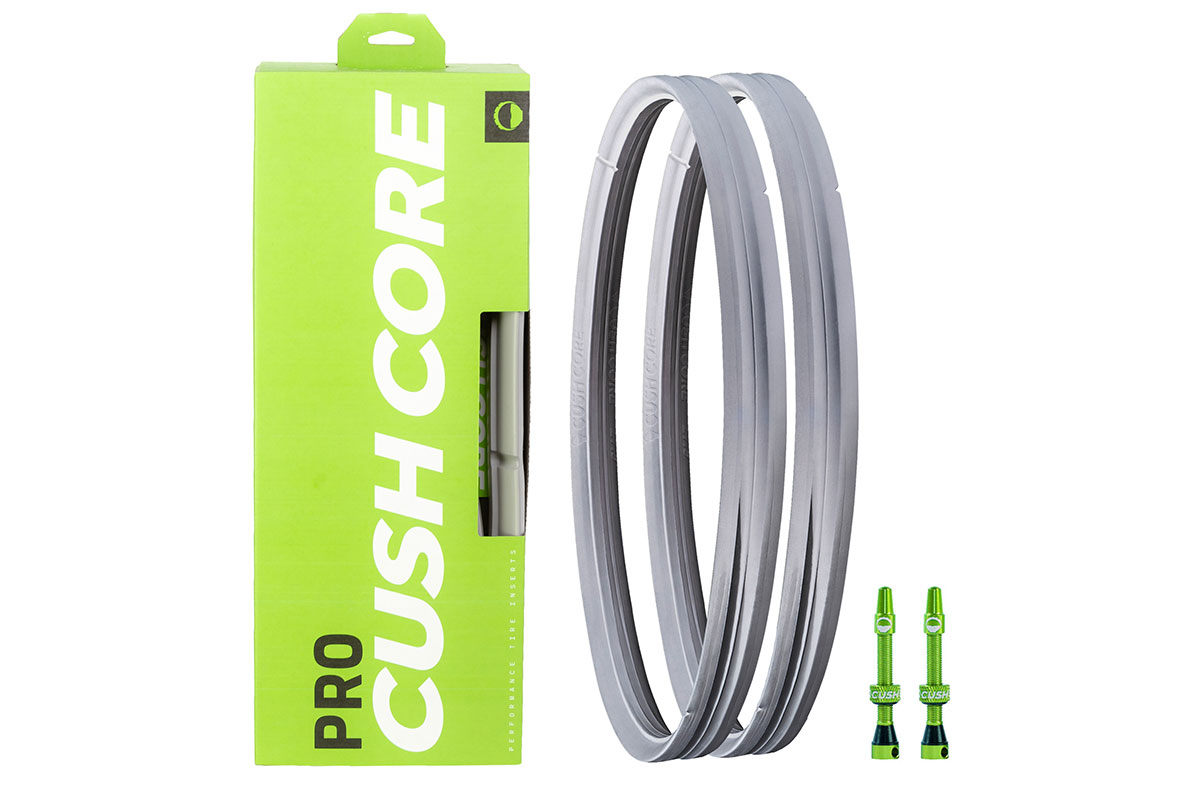 A pair of CushCore Pro Tire Inserts will set you back $149. That money gets you two CushCore tubeless-specific valves too; they have holes that direct sealant and air laterally out of the valve, rather than vertically down onto the insert itself. 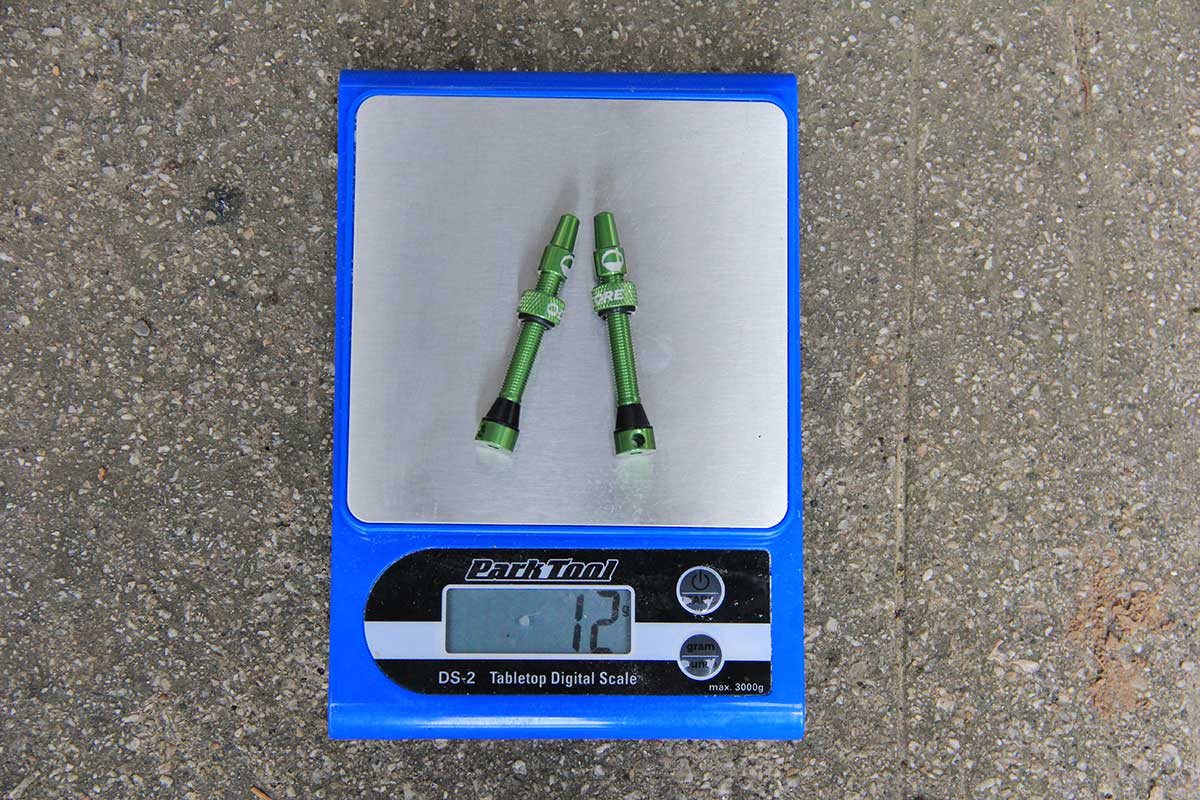 CushCore also offer inserts for smaller and larger rim widths. The PLUS version is designed for 32mm-45mm internal rim widths, while the Gravel.CX version is for 19-26mm widths. There’s also a much lighter version for XC; it fits tire widths 1.8″ to 2.4″ and inner rim widths of 22mm to 32mm.