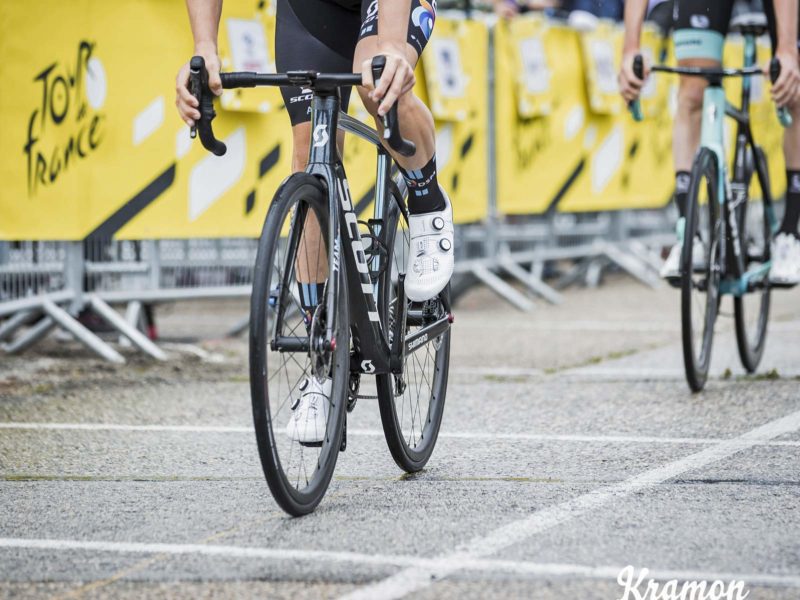 Are Team DSM racing lightweight new prototype Scope climbers’ wheels at this year’s Tour de France? We spotted unmarked, low-profile wheels while watching a wet Stage 9, as the riders got their biggest-yet mountain stage and the first beyond classification climb of the Grand Tour near the Swiss & Italian border. And after news just last week of a development partnership between Scope & DSM, we’re pretty sure these will be some unreleased lightweight Scope prototype wheels that should be coming soon… 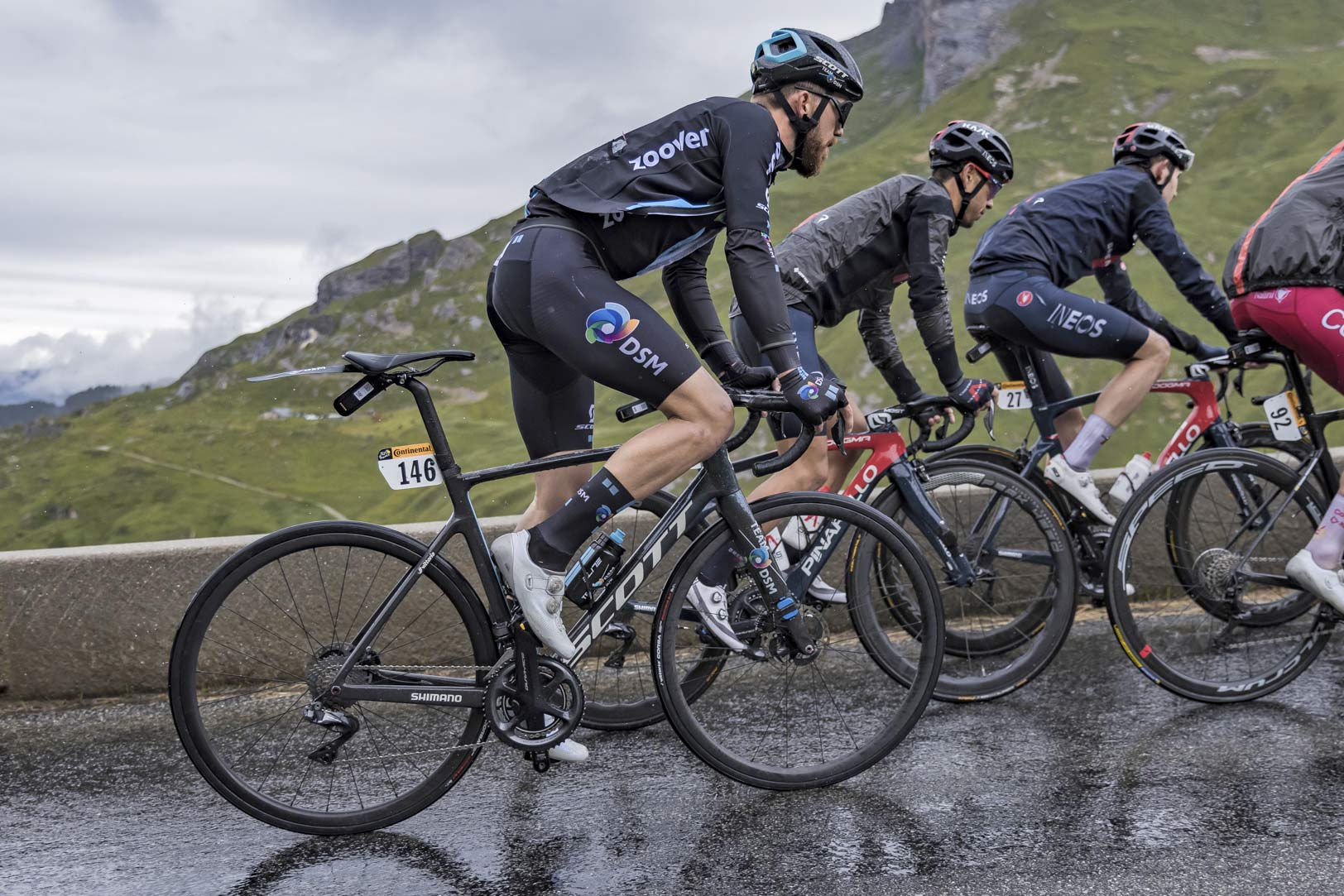 Last Friday we got a press release saying that Scope had become an “Official Supplier Partner of WorldTour Team DSM“. Not quite the same “official partner” level sponsorship deal, this relationship is said to be the Dutch pro team and Dutch wheelmaker working together based on a shared “focus on developing innovative products to maximize performance and to improve safety”.

Scope co-founder Nieck Busser last week described the partnership as “driven by innovation instead of commercial [interests]… The competencies we developed over the years, combined with our agile way of working makes [it so] that we can quickly turn a conceptual idea into a product. We believe that this partnership brings a lot of value into our company. The innovations developed through this partnership will be the foundation for our future products.” 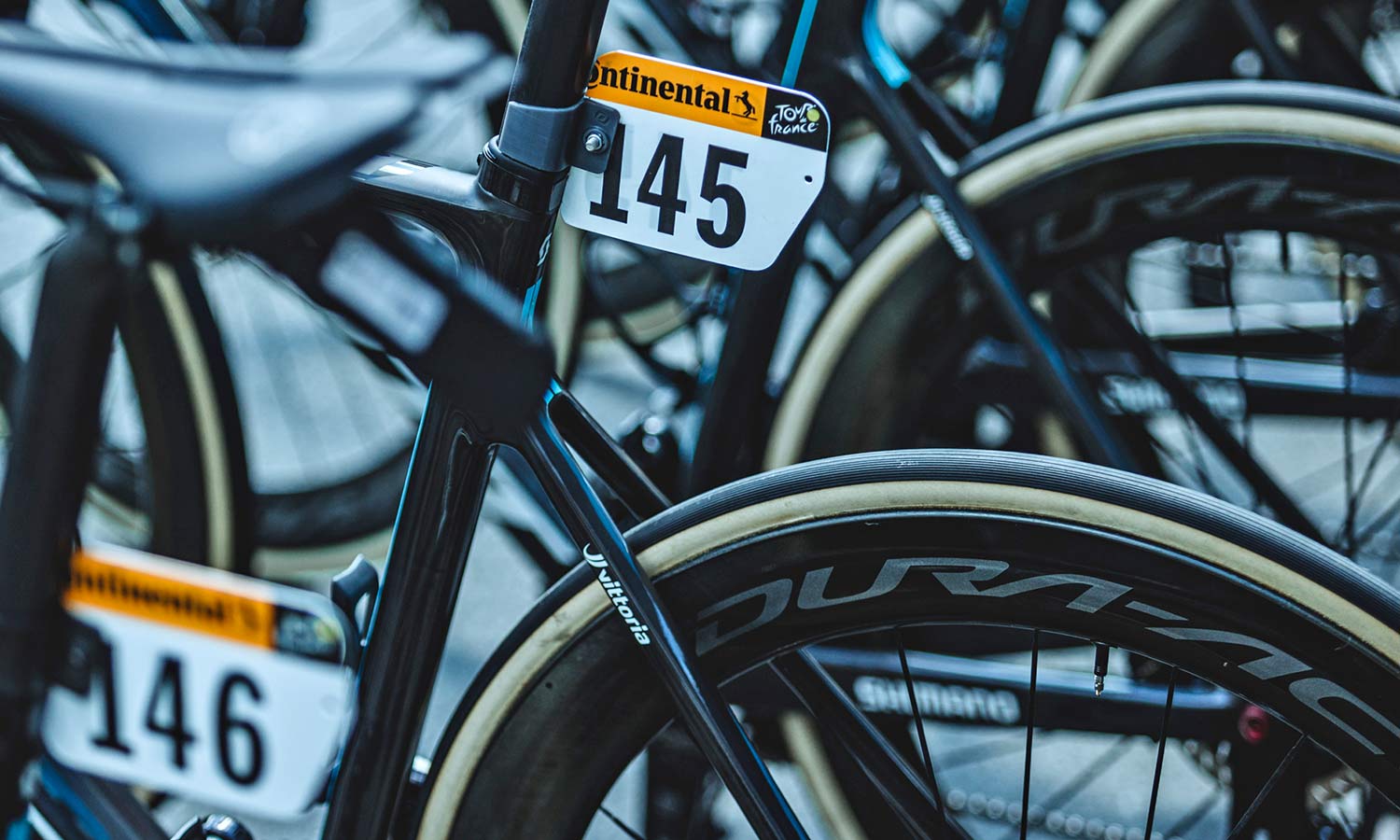 In earlier flatter stages, Team DSM did appear to still be rolling on Dura-Ace carbon wheels from sponsor/”Official Partner” Shimano, with what appeared to be cotton Vittoria tubulars glued on. They then switched to family-brand PRO wheels for the time trial. 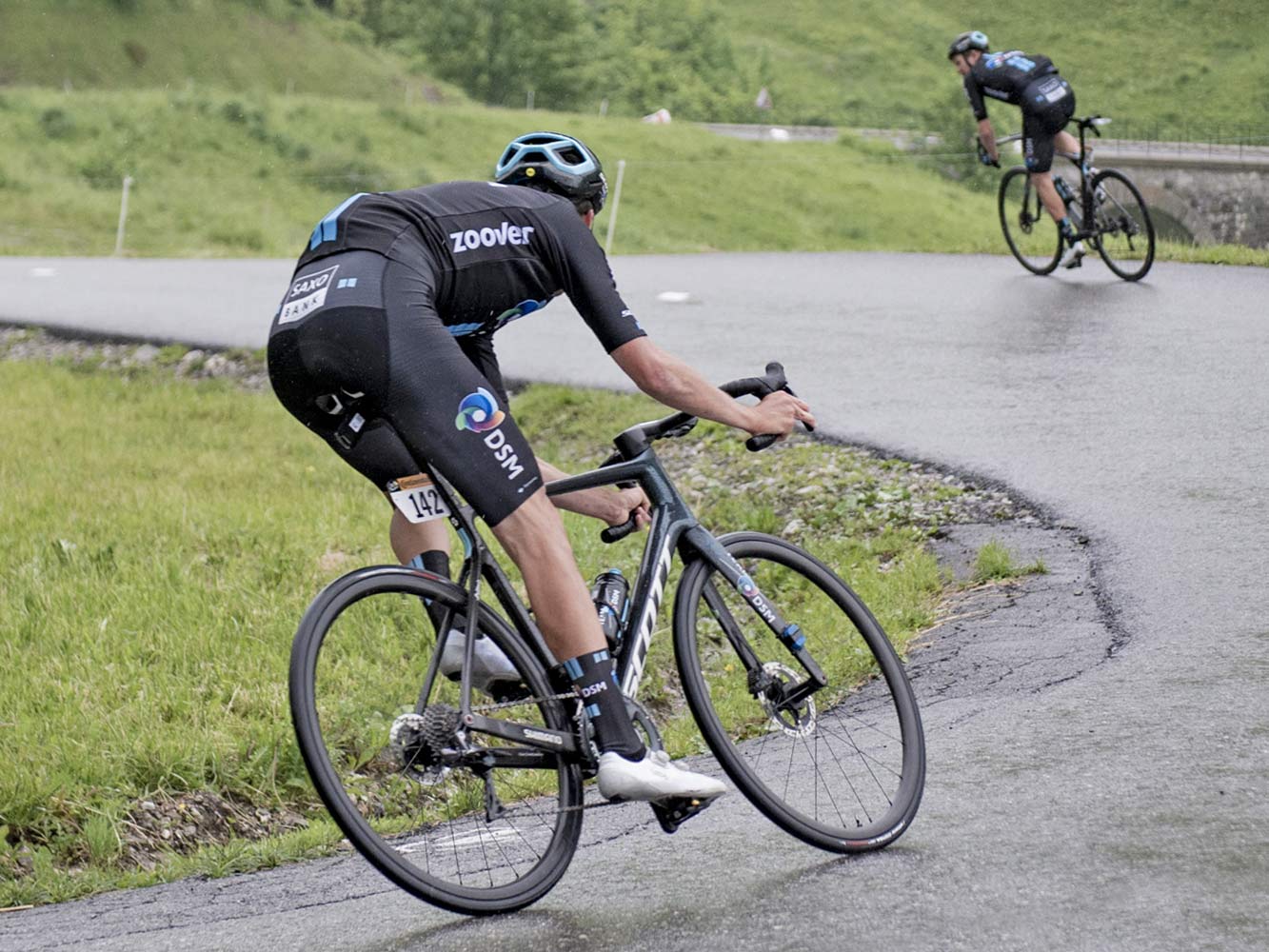 But these new wheels are definitely not Shimano, and appear to be matched to black wall Vittoria Corsa Tubeless-Ready Graphene 2.0 tires based on their sidewall markings. With no visible tubular base tape and visible nuts on the valves, this is almost certainly a road tubeless setup.

That’s a big step away from cotton tubulars, but could likely explain the comment about marginal performance gains, combined with improved safety due to the purported lower rolling resistance and decreased occurrence of flat tires with tubeless? 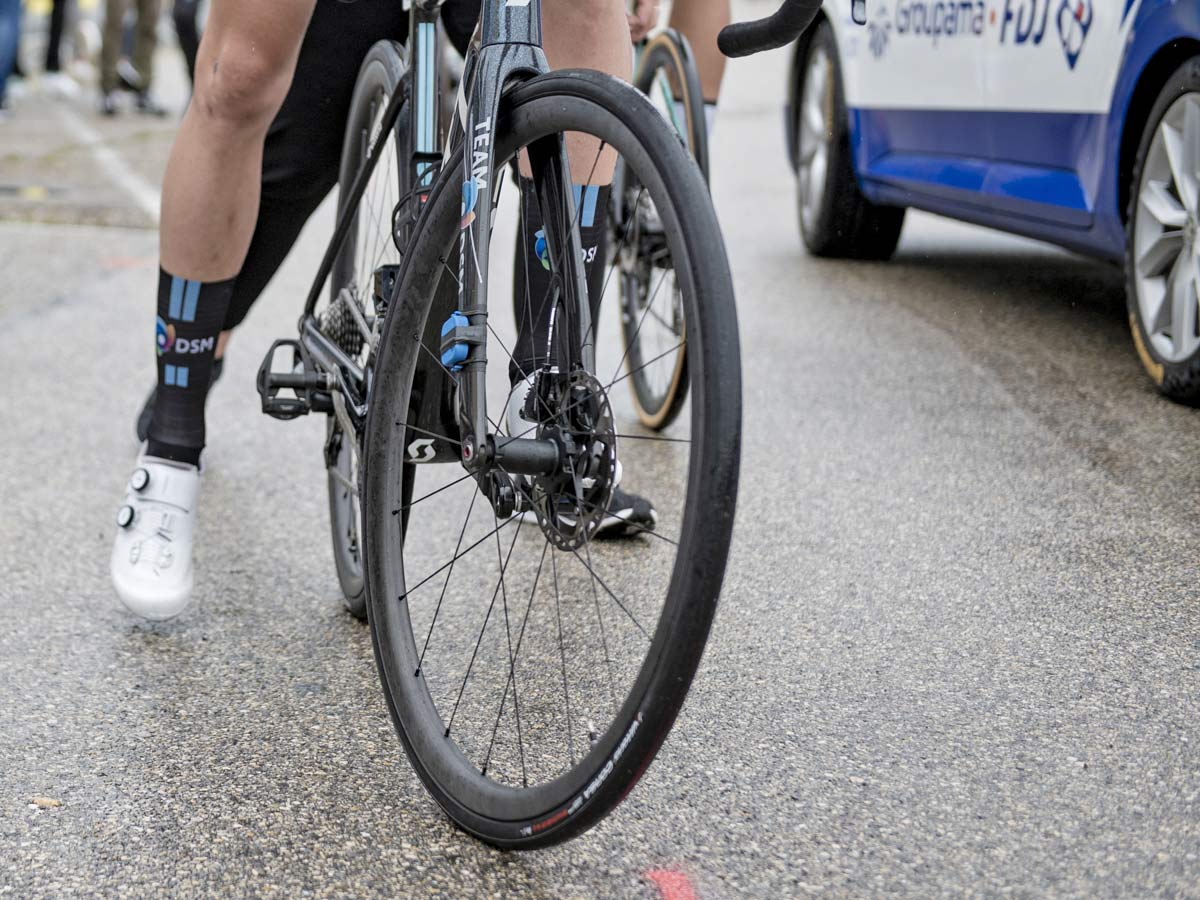 What we can also plainly see is the distinct profile of Scope’s latest hubshell design. Slightly tweaked from their original design, the new hubs feature a smooth cylindrical center, with a slightly enlarged driveside flange for the straight pull spokes (with external nipples), and a larger blocky toothed shape on the disc-side.

The depth appears to be around the same 30mm of their current lightest R3 wheels, although this angled front profile does seem a bit wider, more in line with their newest R3a all-road wheels. 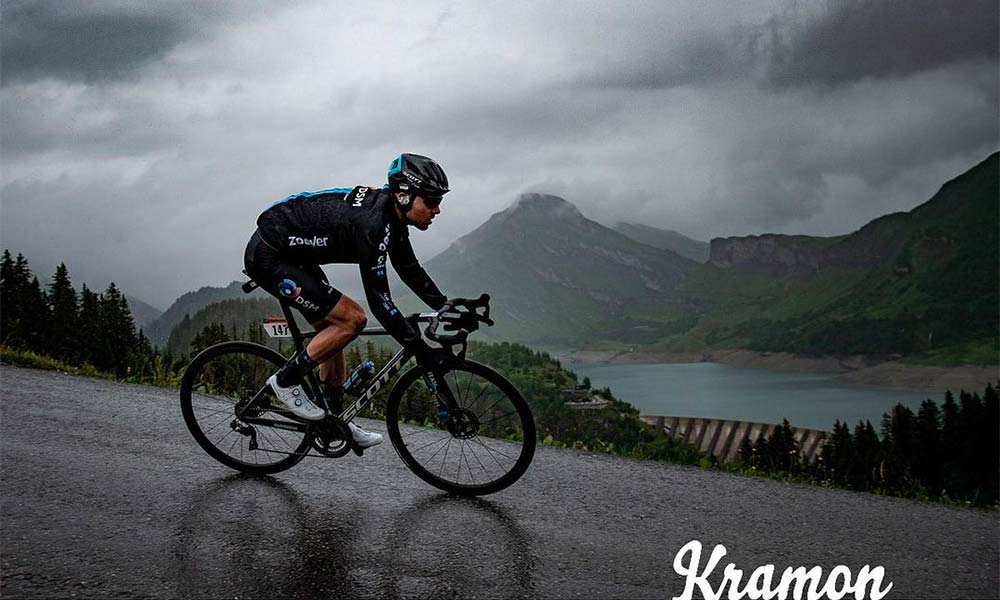 Scope hasn’t yet confirmed that any new prototype wheels are in development after the release of their updated Race line, the new lower-cost Sport line, or whether these may simply be one of their existing wheels without logos. They’ve only confirmed that Scope & Team DSM have been “working together for a while now” with the goal of further developing their wheel offerings.

But if DSM are testing out Scope prototype wheels at the Tour, we’d expect that they are close to, if not ready for production. While the Tour de France is a good proving ground, most teams wouldn’t risk racing anything they aren’t already confident in. So, consumer versions of new race-ready carbon wheels may be coming soon…