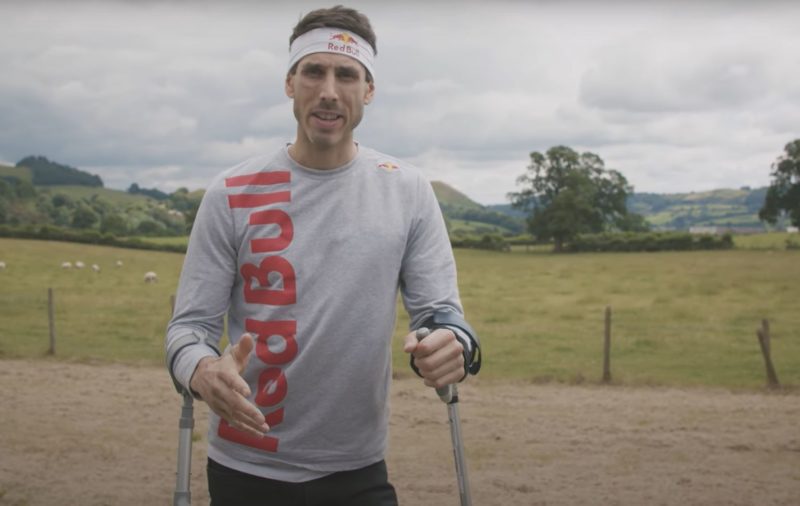 On June 18, MTB legend Gee Atherton suffered the worst crash of his career. It occurred in the Welsh town of Dinas Mawddwy while filming the third installment to his The Ridge Line and The Slate Line series.

On July 16, just 3 weeks after the potentially life-changing accident, the Red Bull athlete took to YouTube with a serious but uplifting progress note.

Aerial footage of the event (which begins at the 1:01 mark in the clip above) shows Atherton as he “tumbled, ragdolled” down 100 feet of the steep, slate-laden hillside. In all,  the athlete sustained several spectacular injuries: a shattered femur, fractured radius and ulnar (forearm), fractures to multiple ribs, a broken nose and eye socket, a collapsed lung, and — not surprisingly — one hell of a concussion.

Atherton delivers his recount of the incident in a somber but positive tone. Halfway through the video he notes, “the injuries — though they’re massive, and there is a big list of them — are already healing well…I’ve been walking without the crutches already, we’ve started physio in the gym. The leg can take some weight; the arm has got some strength in it. Everything, every day, is getting a little bit better.”

Atherton’s parting statements are confident and determined: “you have to be willing to take the consequences when it goes wrong…take the recovery time. It’s difficult, but you know that going in…That’s just how it works. I feel I’ve been lucky with these injuries — it could have been a lot worse. And I’ll be back.”