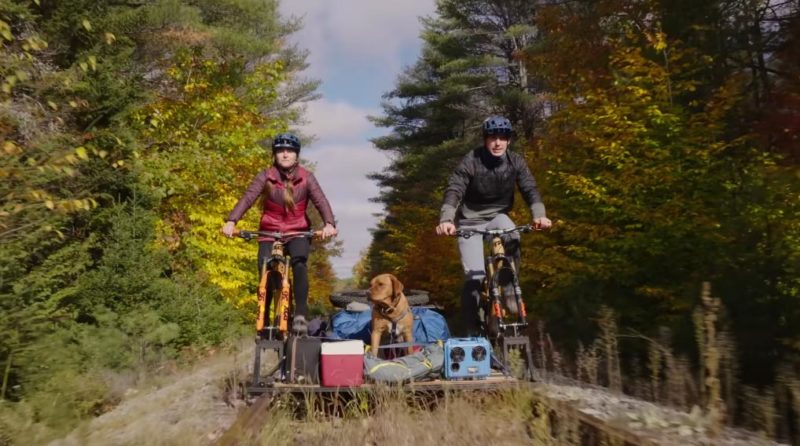 It seems like wherever you go, you can stumble past a railroad track. Once the main way to deliver goods across the country, trains are slowly losing out to faster methods of transport leaving their tracks dormant. That’s opened recreational opportunities for companies like Revolution Rail, who operate Rail Biking tours in New York, New Jersey, and Colorado. While those tours already rely on custom built rail bikes, the concept gave professional mountain biker Alex McAndrew an idea…

What if you built a platform that allowed two people and their dog to travel the rails by bike? More importantly, it would provide a way to explore terrain off the rails as you travel along? Sounds like a wild dream, but it’s one that Alex & Ella McAndrew (and their dog) made into a reality.

It should go without saying that you shouldn’t attempt this on just any railroad near you. The McAndrews worked with Revolution Rail to ensure a safe (and legal) passage on the rails shown the video.

With that said, this looks like an incredible adventure that we’d love to try!

You’ve never heard of a choose your own adventure story quite like this—where personal and professional passions are combined to create a whole new way to explore the outdoors. Smartwool presents Riding the Rails, a short film about one man’s drive, his family’s love for the outdoors, and how their railroad-ready bikes allow them to access the most secluded wild places in the Northeastern United States. #gofarfeelgood