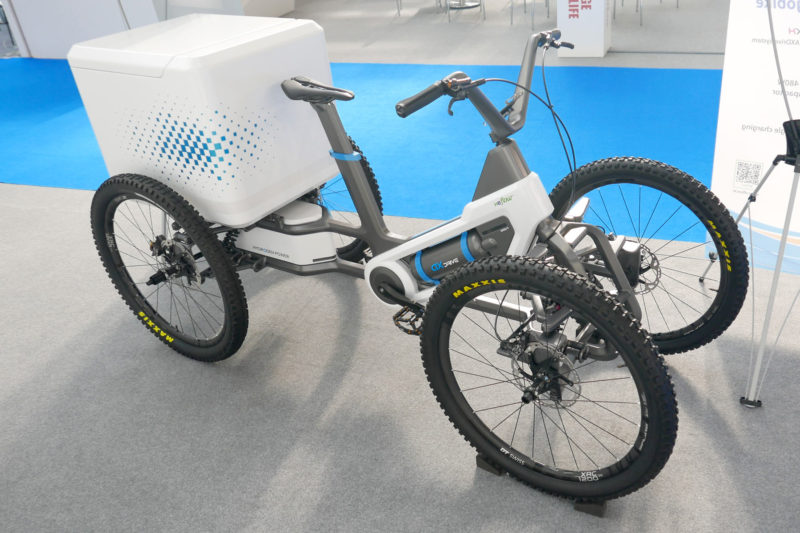 Eurobike has a bit of everything, but these wild prototype concept bike projects from Muzzi Cycles, HeFlow & Komo Bike caught our eyes. Muzzi is a one-piece molded plastic frame that can be recycled or even made from recycled material. HeFlow is an adaptable 4-wheeled cargo bike powered by a hydrogen engine. And Komo’s project is a mini-wheeled city ebike with no hubs… 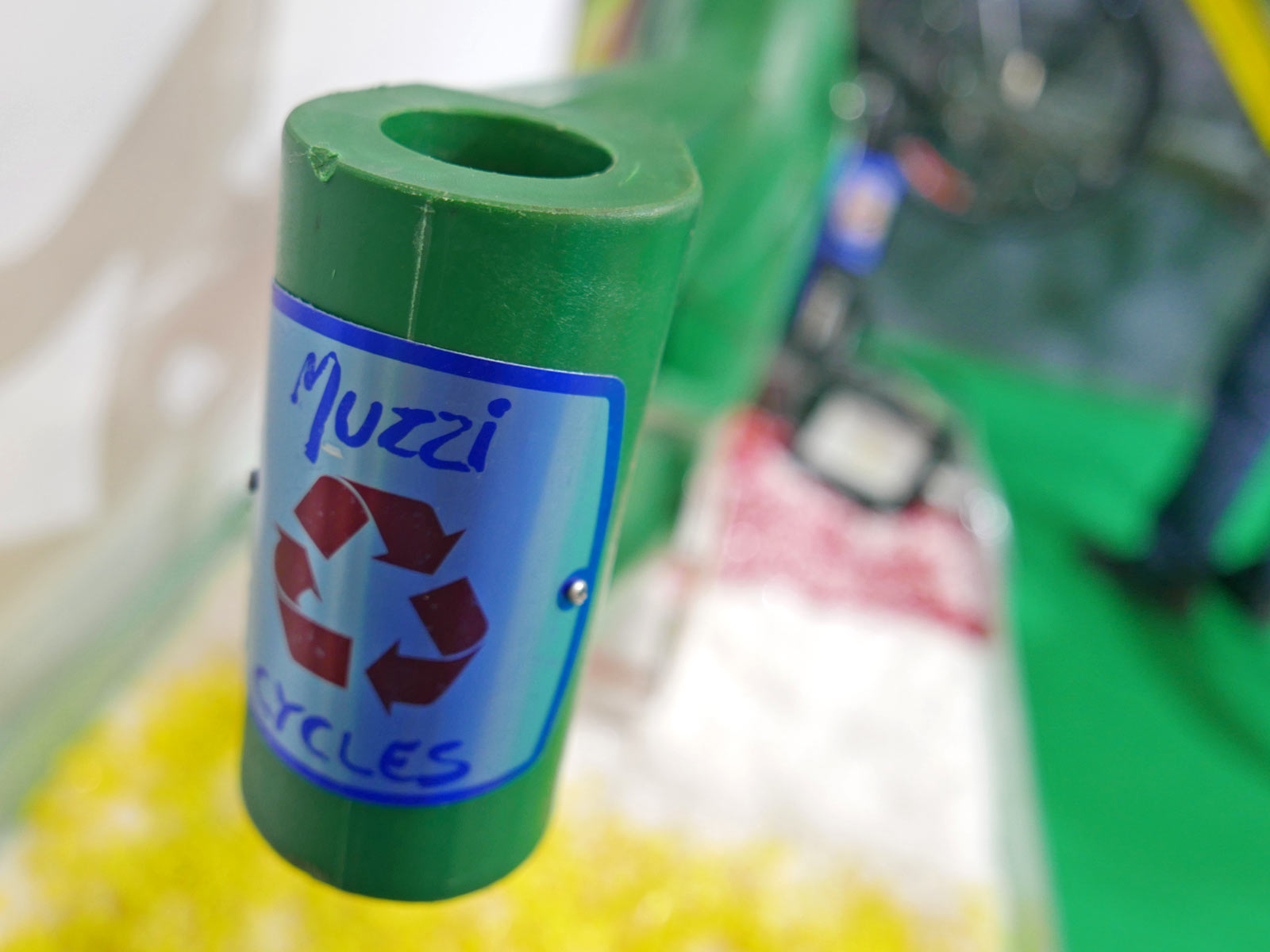 Surprisingly enough, the entirely one-piece plastic Muzzi Cycles frame project has actually been around for more than 20 years, with functional production as early as 2008.

But in the time since, this made-in-Brazill concept bike has evolved the frame design itself, and even the material that it is made from. 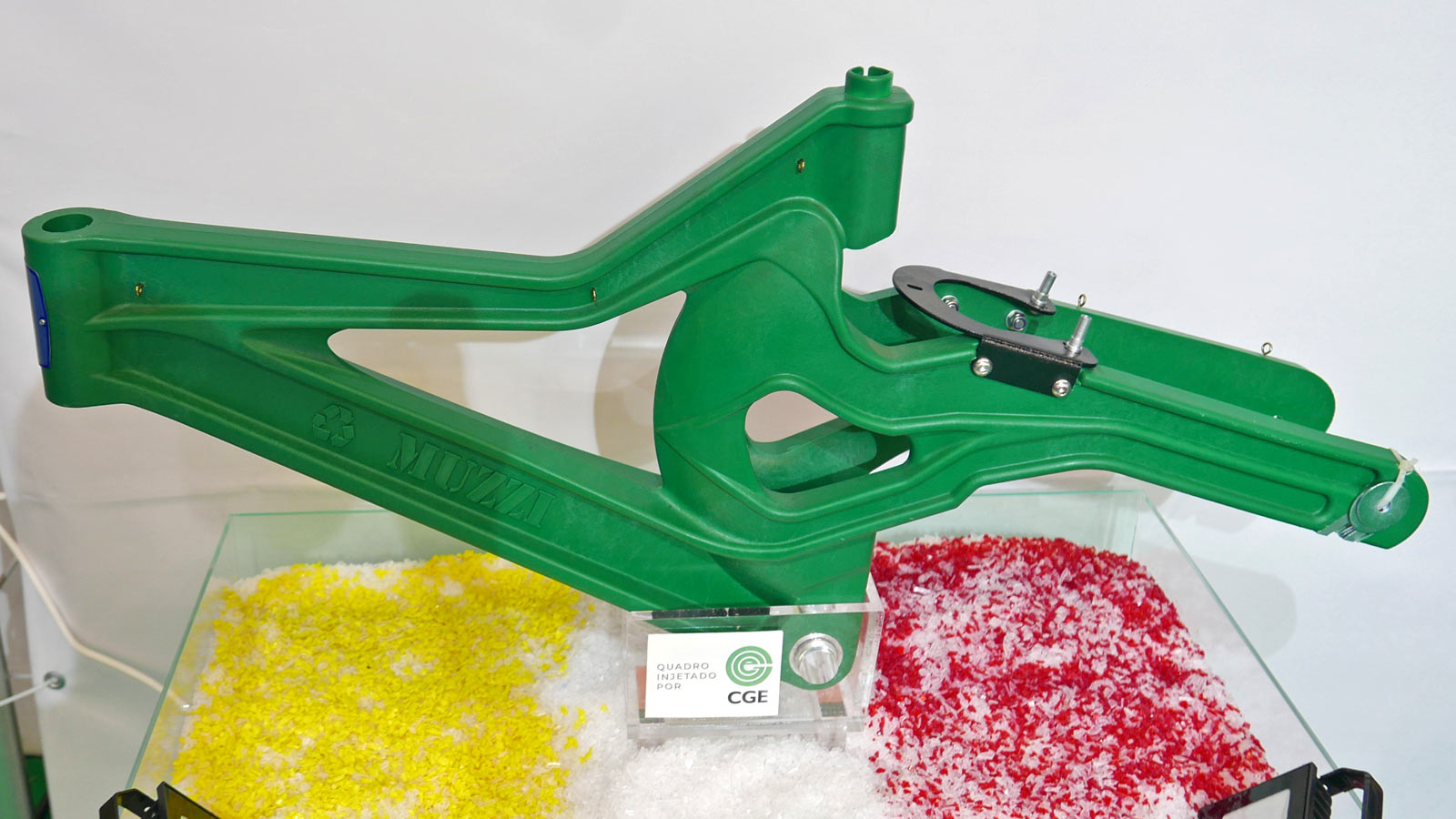 Environmental sustainability has been been a key focus since the start. And these latest models are created from a blend of various recycled post-consumer plastics, and now even “photosynthesis-based” frames that incorporate biomass fibers in the injection-molded composite blend. 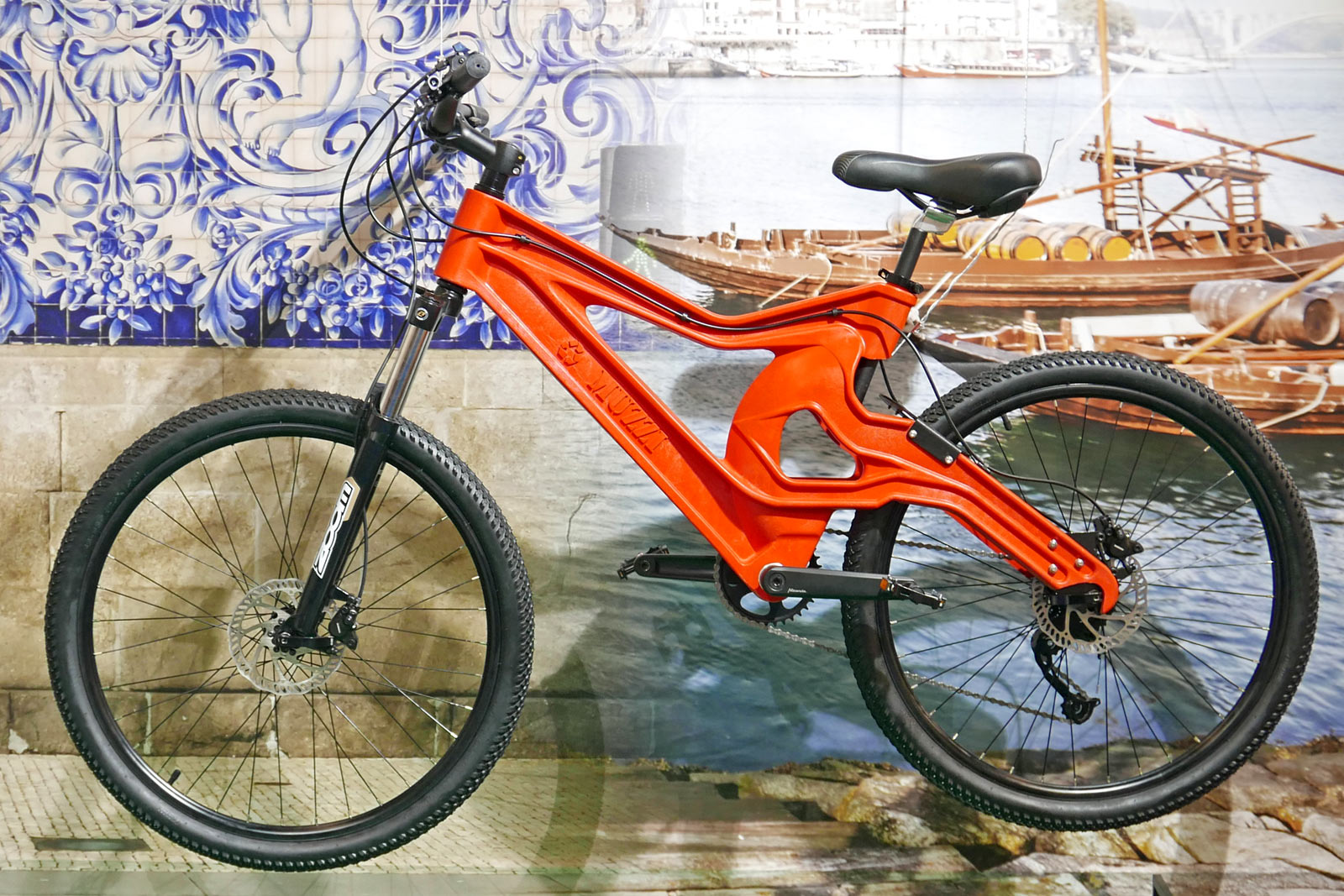 Thanks to the modular design – and the thick resulting frame sections – the Muzzi Cycles has been able to be adapted to various newer standards in recent years. 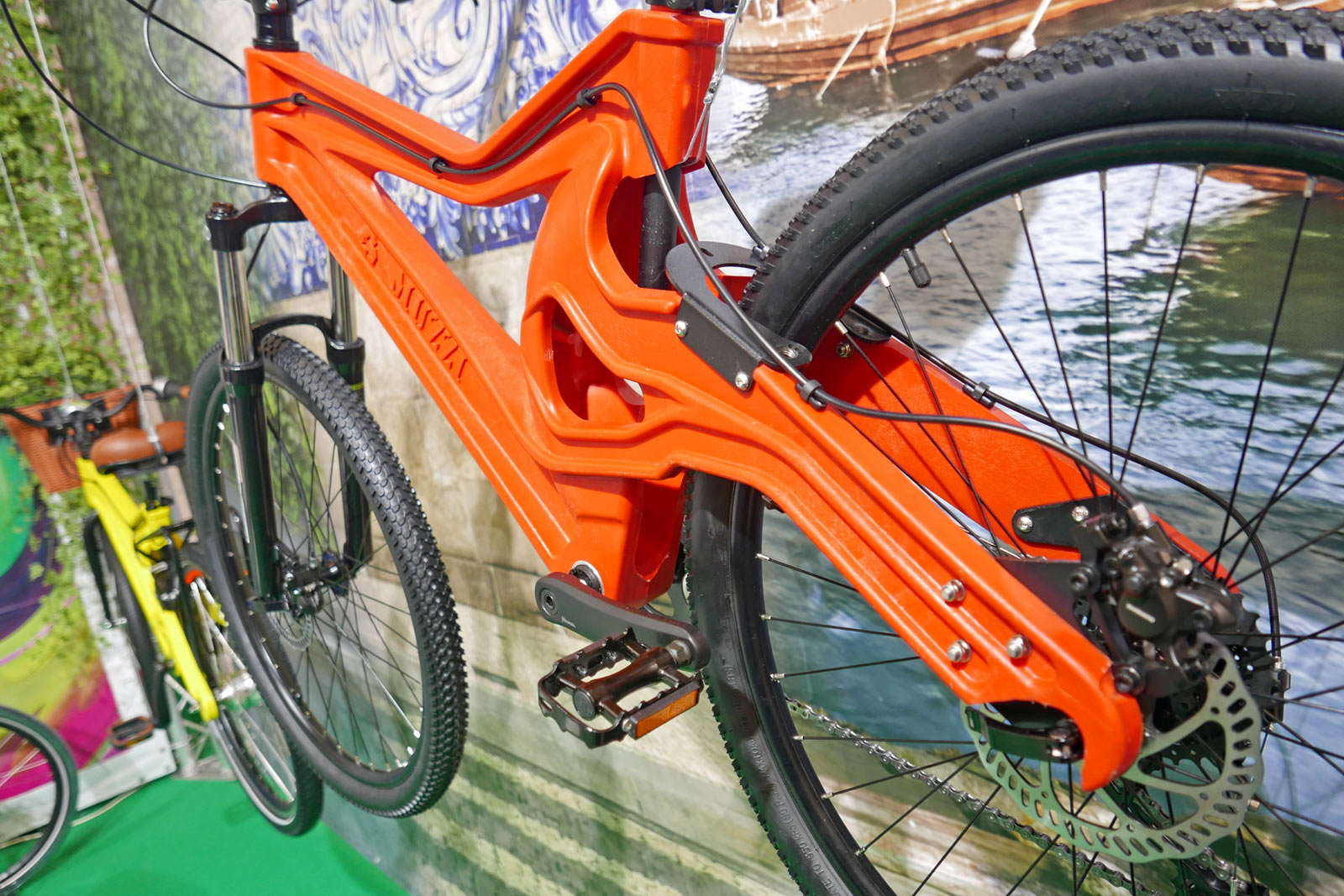 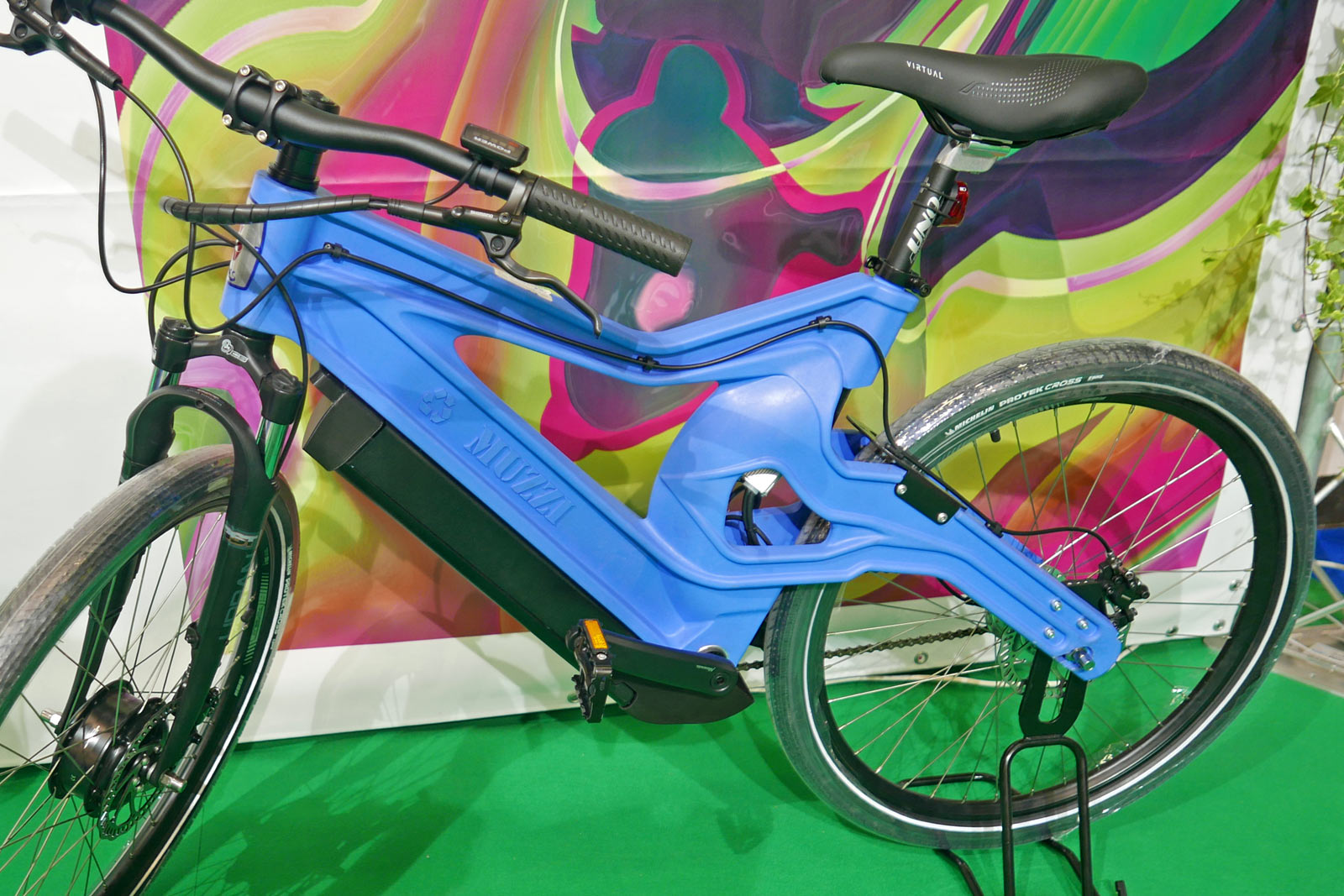 Muzzi have even managed to turn the sustainable modular recycled plastic project bike into an e-bike now, screwing a battery under the plastic downtube and adding a front-drive hub motor that allowed them to keep the regular disc brake / derailleur-geared rear end. 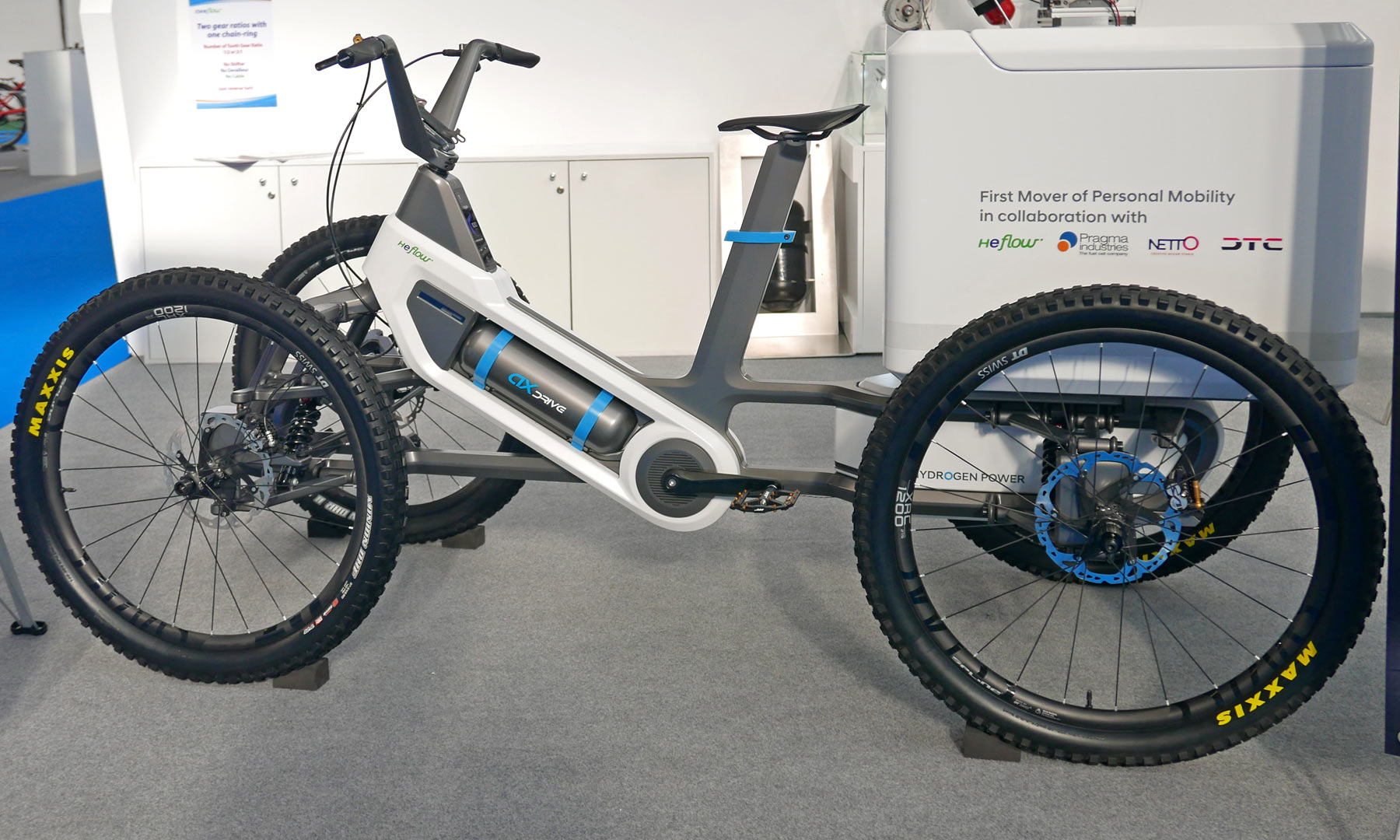 A bit further away from something you can buy right away, the HeFlow 4 H2 is a 4-wheeled cargo ebike platform, powered by a hydrogen fuel cell.

The Alpha Neo Hydrogen AXH fuel cell packs a 480W PEM fuel cell that is used to deliver power to the 250W electric drive system for the rear wheels. Output torque is rated at 120Nm to propel this beast, and the fuel cell stores a huge 1300Wh of energy to give it a long 150km range. 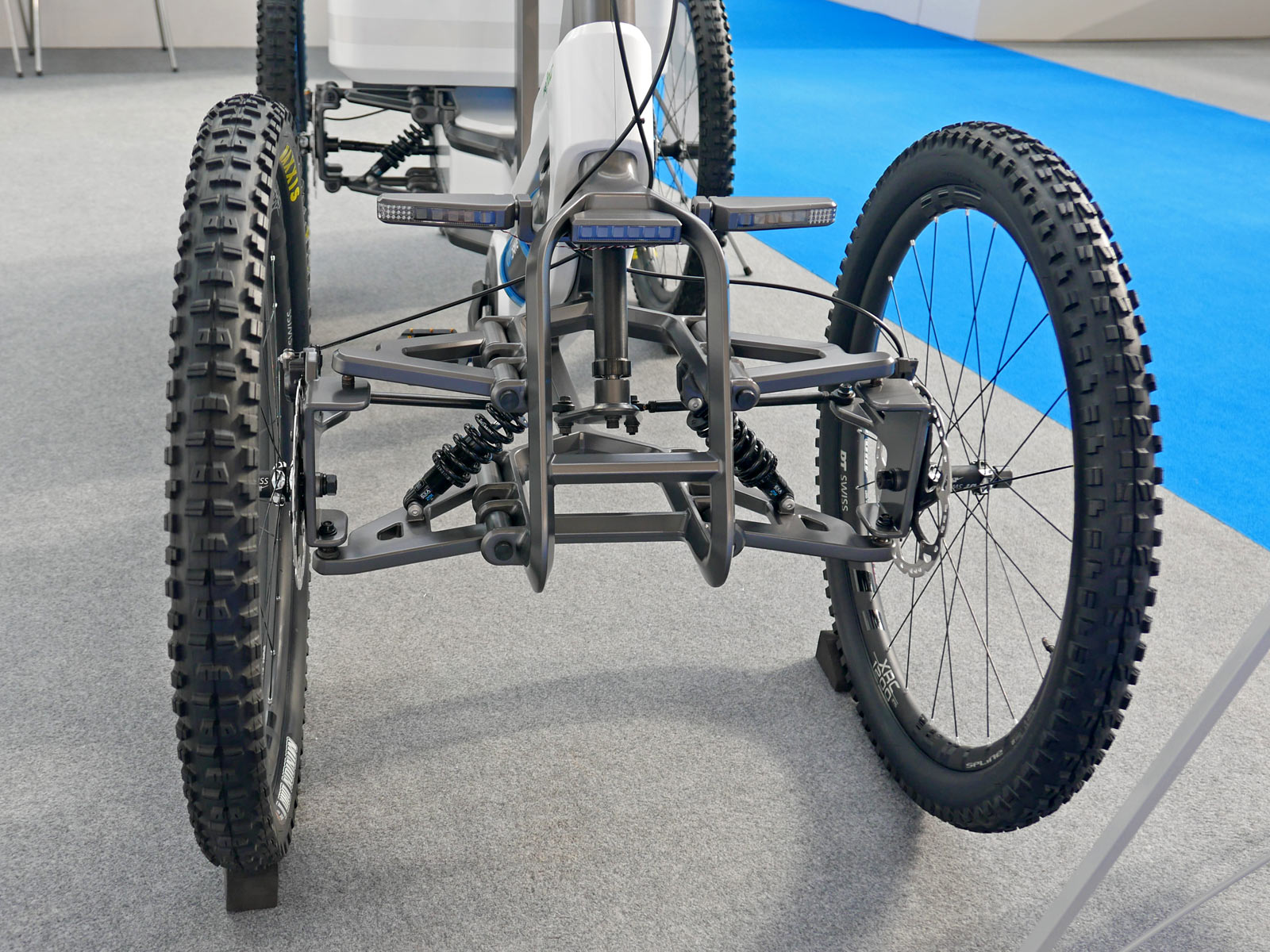 But the real trick though is that the fuel cell can be refilled and recharged to its 300bar (4350psi) max pressure in just 2 minutes making it ideal for repeated service where you won’t have to wait for a battery to slowly recharge. 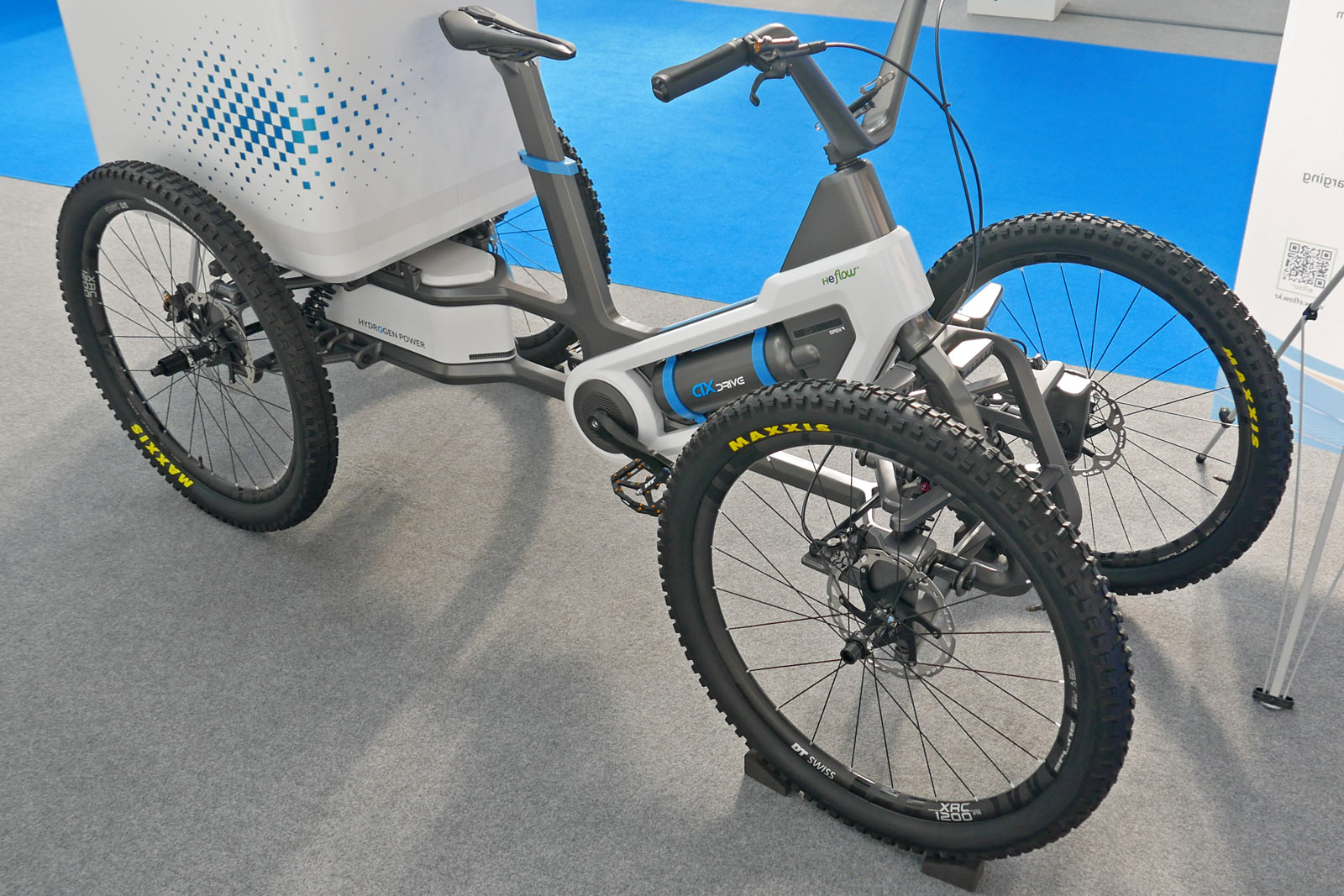 With 27.5/650b wheels it can be built up with urban slick or knobby mountain bike tires. The standard utility model has this built in box, but there are also a couple of different delivery trailer add-ons possible including one that can haul a full-size pallet, plus a family model with a kids seat in the back or a MTB model with a low-profile luggage platform. 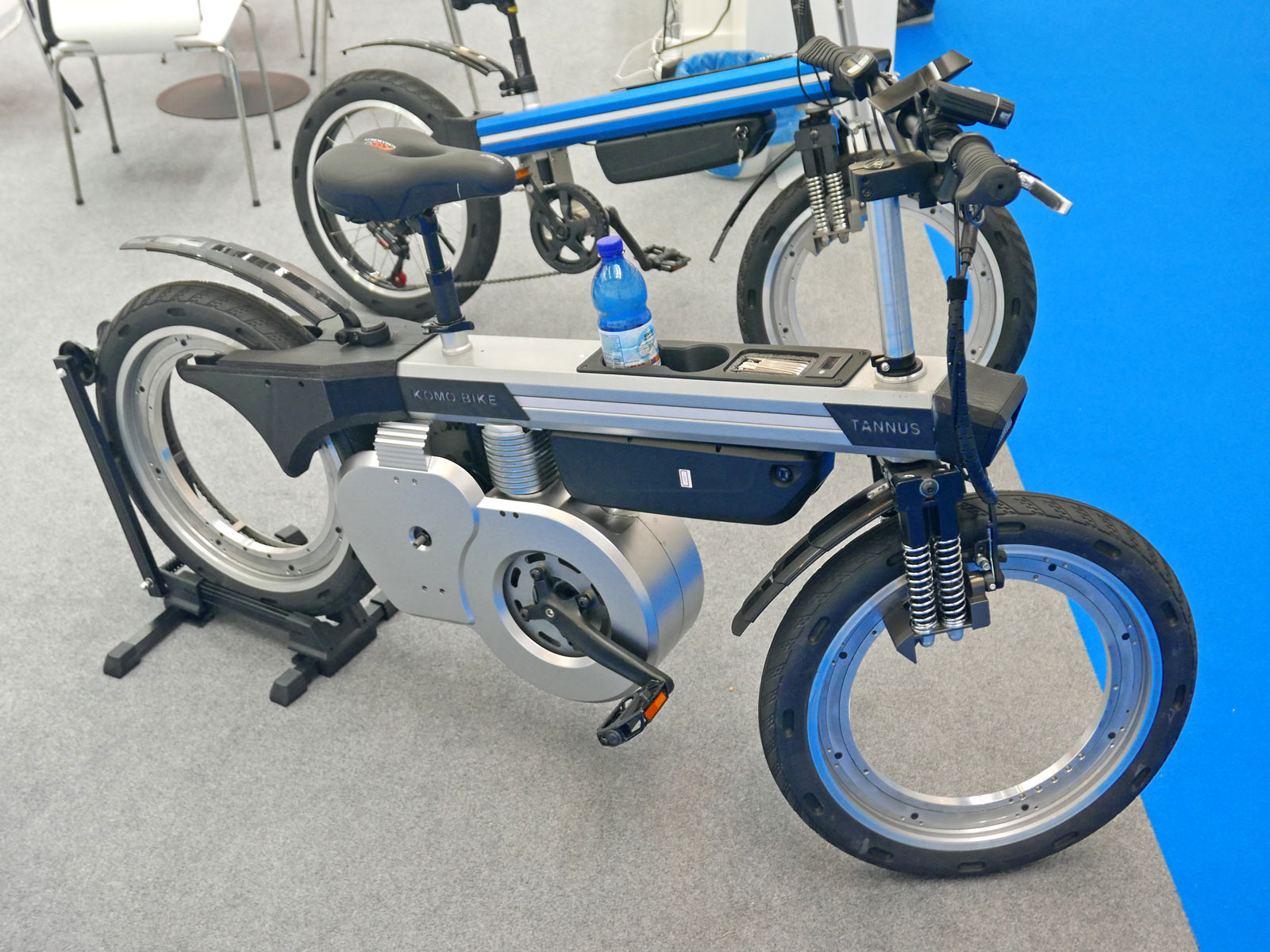 This last one is another e-mobility engineering exercise out of South Korea. The Korea Mobilty development company of the hubless Komo Bike seems to just want to prove the viability of the “futuristic design” concept. 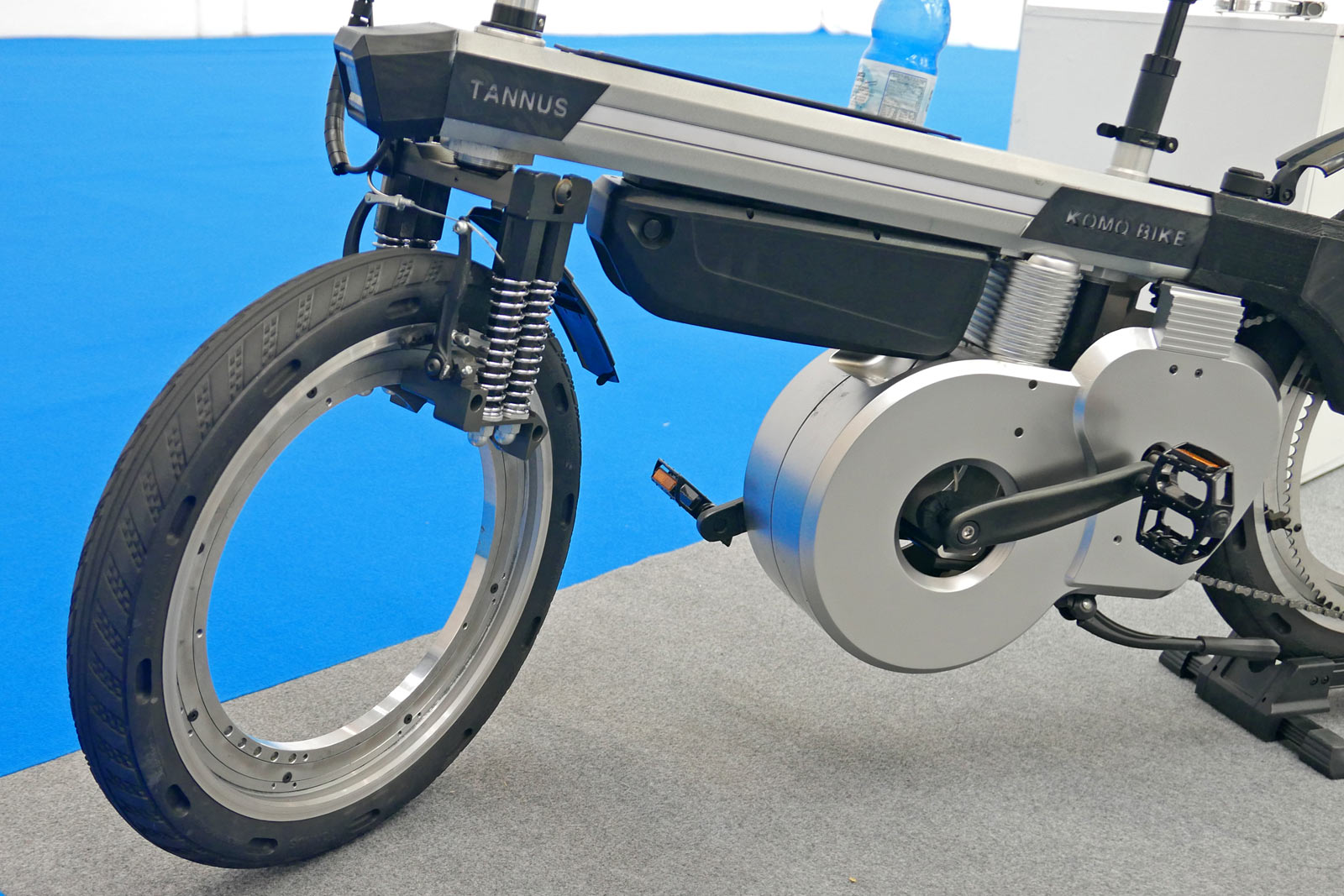 The hubless front wheel spins around rollers on the short sprung fork, and comes to a stop with a conventional V-brake on the aluminum rim, then wrapped with solid airless Tannus tires. 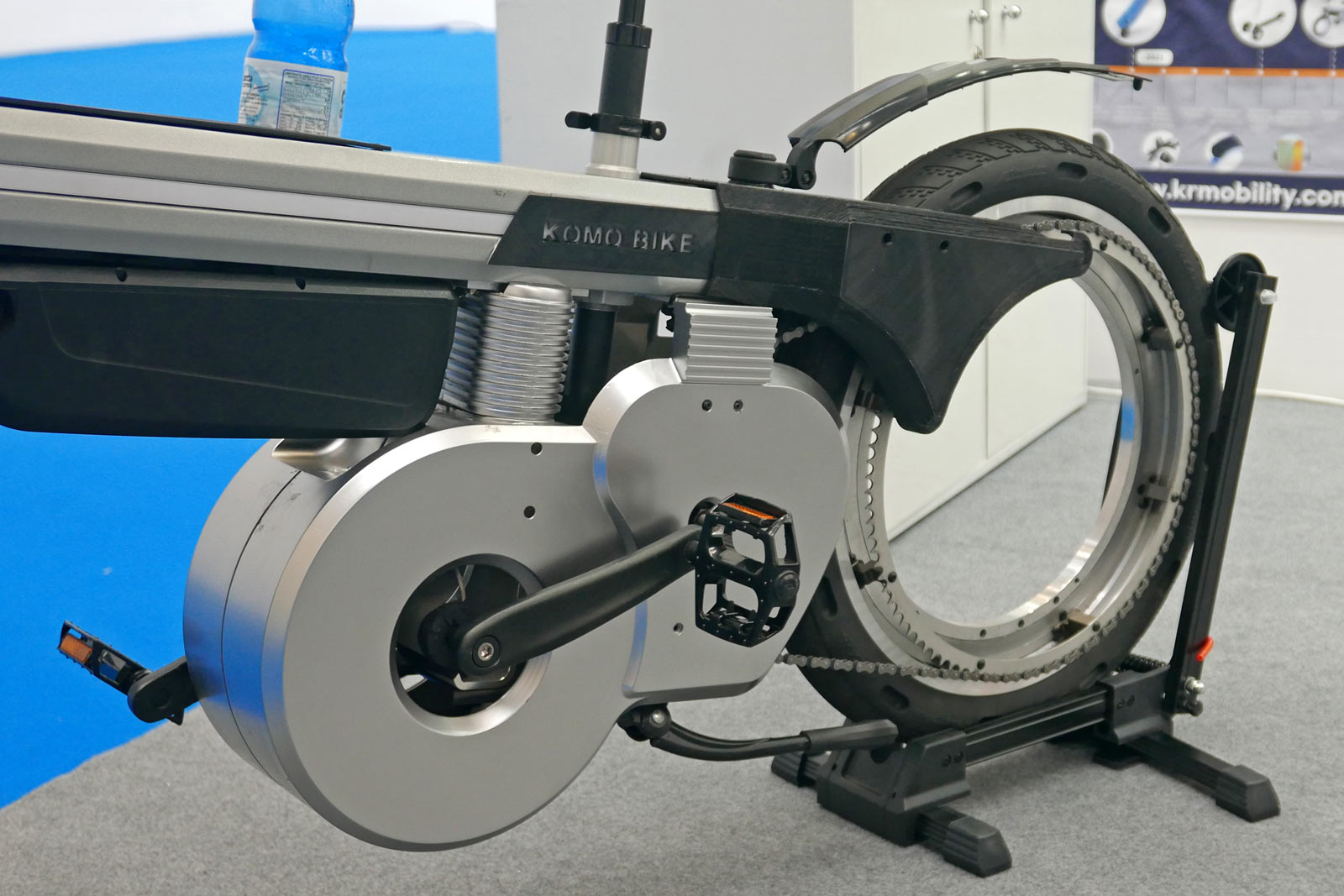 The hubless rear wheel is driven by a huge rim-sized cog with a direct drive to the motor that acts a regenerative rear wheel brake, as well for a claimed 15% boost in range. 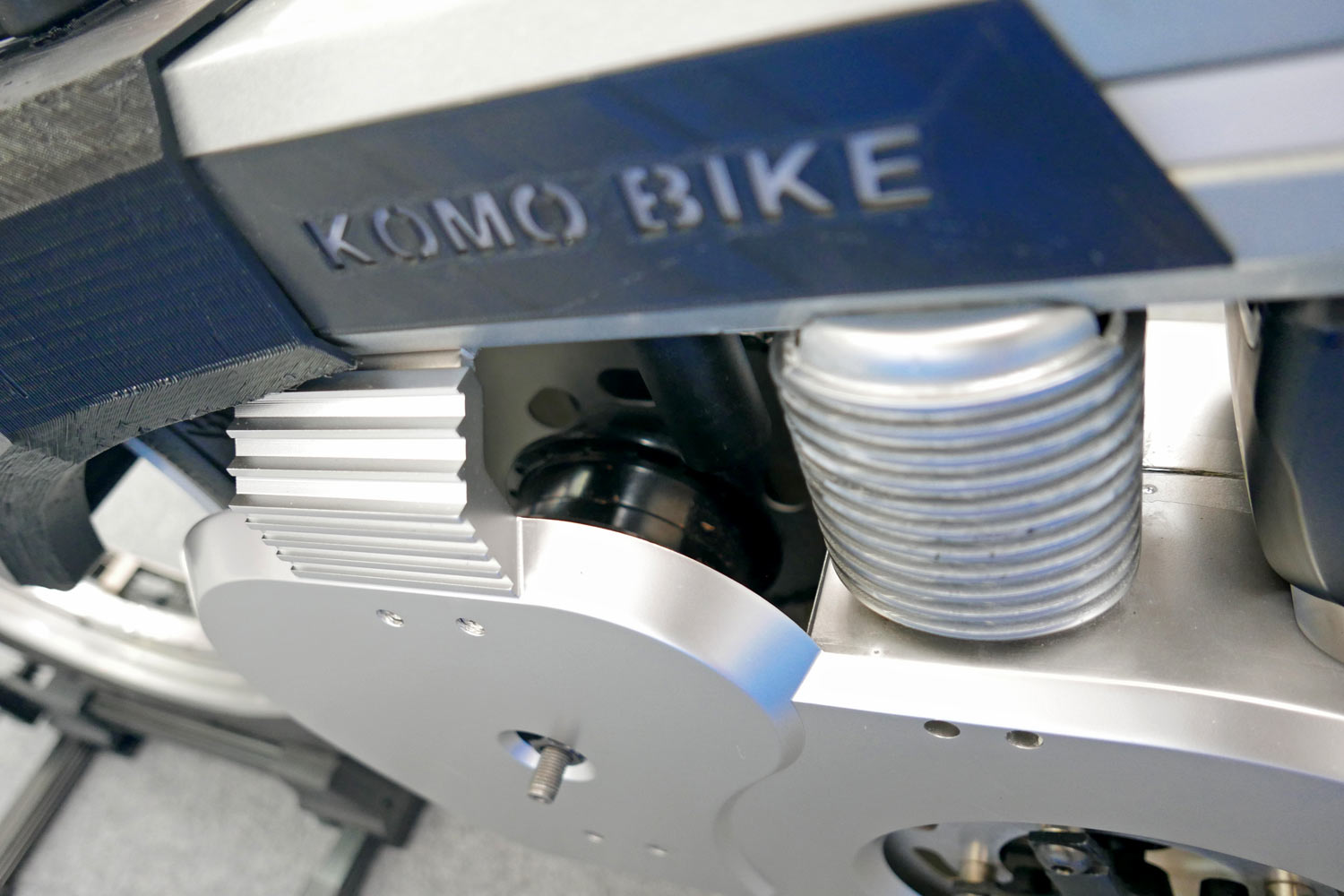 Tucked in between the two wheels, the Komo concept bike actually uses a conventional hub motor, at least in this working prototype. For now it all sits in a bulky, bolted-together aluminum frame that uses many 3D-printed parts to finish off the futuristic looks. 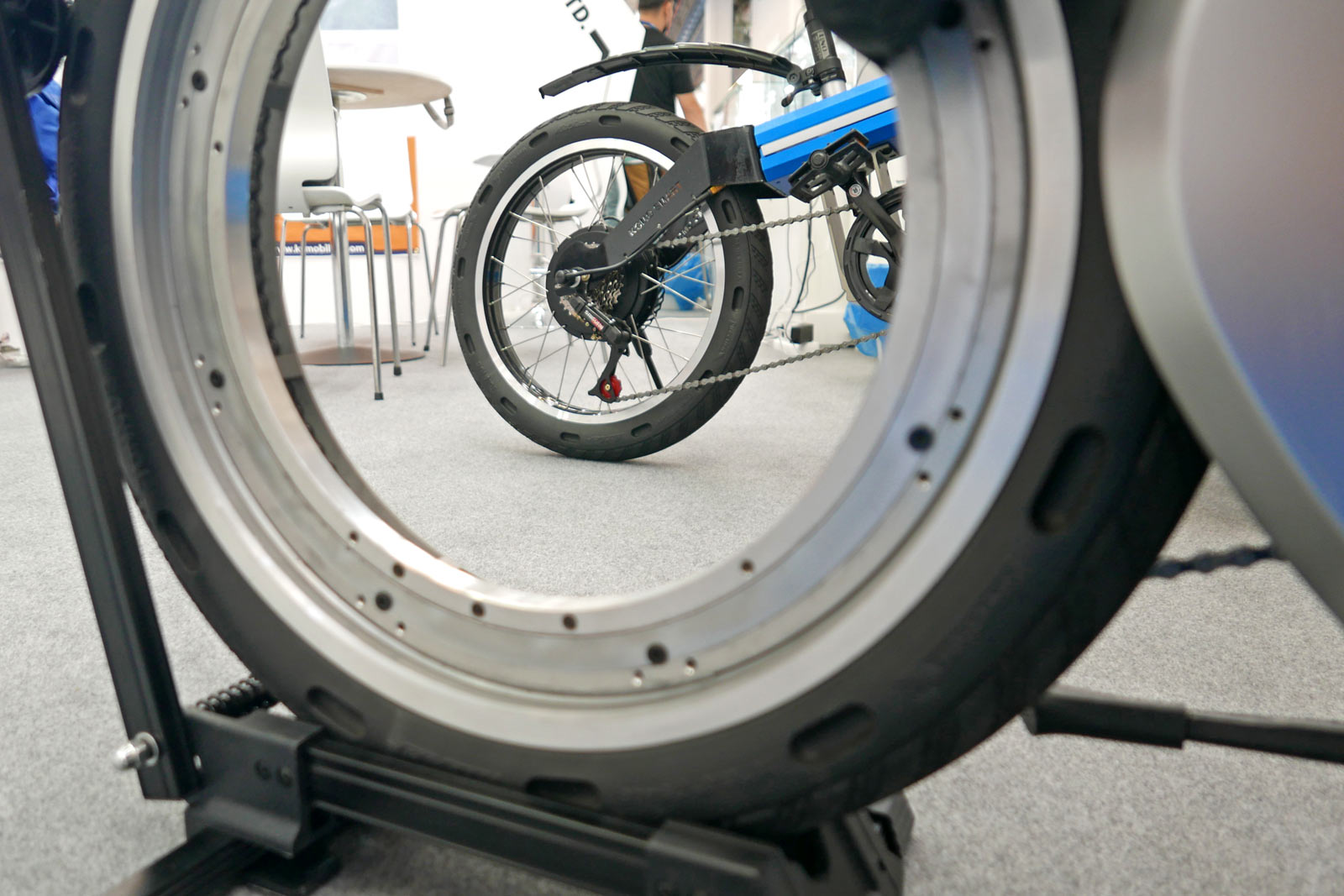 While the fully hubless Komo Bike concept is still a ways off… look through that hollow rear wheel to see the Komo Smart, a more current ebike that swaps in a conventional derailleur drivetrain, spokes, and rear hub motor for functional simplicity. The Komo Smart still gets the hubless front wheel and is serving as a proof of concept and test-bed for the further development of the fully-hubless model.

Jeez, the eBikes are increasingly so very non-bicycle, it makes me think that you should break them out into another site. Maybe ebikerumor is still available?

If it pedals to go, it’s all good imo

whatever
Reply to  Ron

OOOOrrrr you could jut not click on the link.

That hydrogen powered, four-wheeled bike thing is awesome! I really want one

Hey, is the hubless wheel stronger than one with spokes? I really like that it’s airless also.