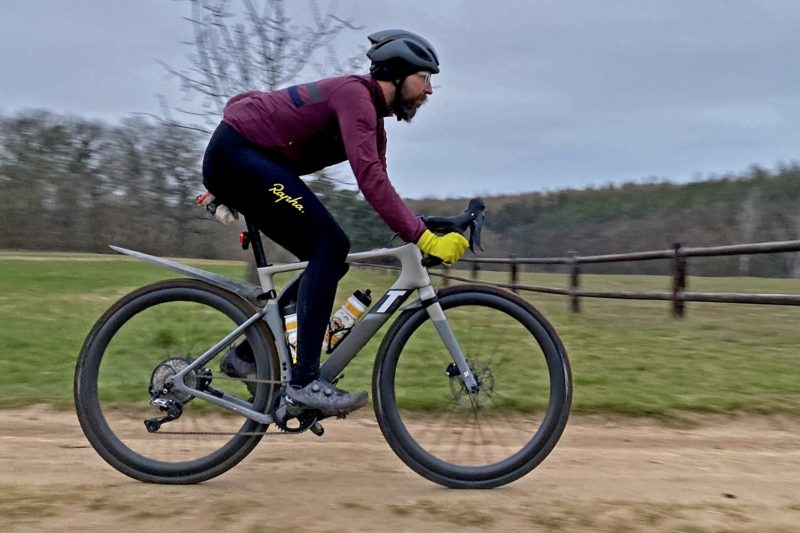 3T has taken their popular, premium Exploro RaceMax gravel bike and given it a stealthy e-bike Boost, driven by a hidden ebikemotion X35+ powertrain. Meant to offer more of a gentle assist rather than maximum e-bike power, the Exploro RaceMax Boost is pleasantly lightweight for a gravel bike and promises all-terrain, all-surface versatility maybe without a lot of that e-bike stigma… 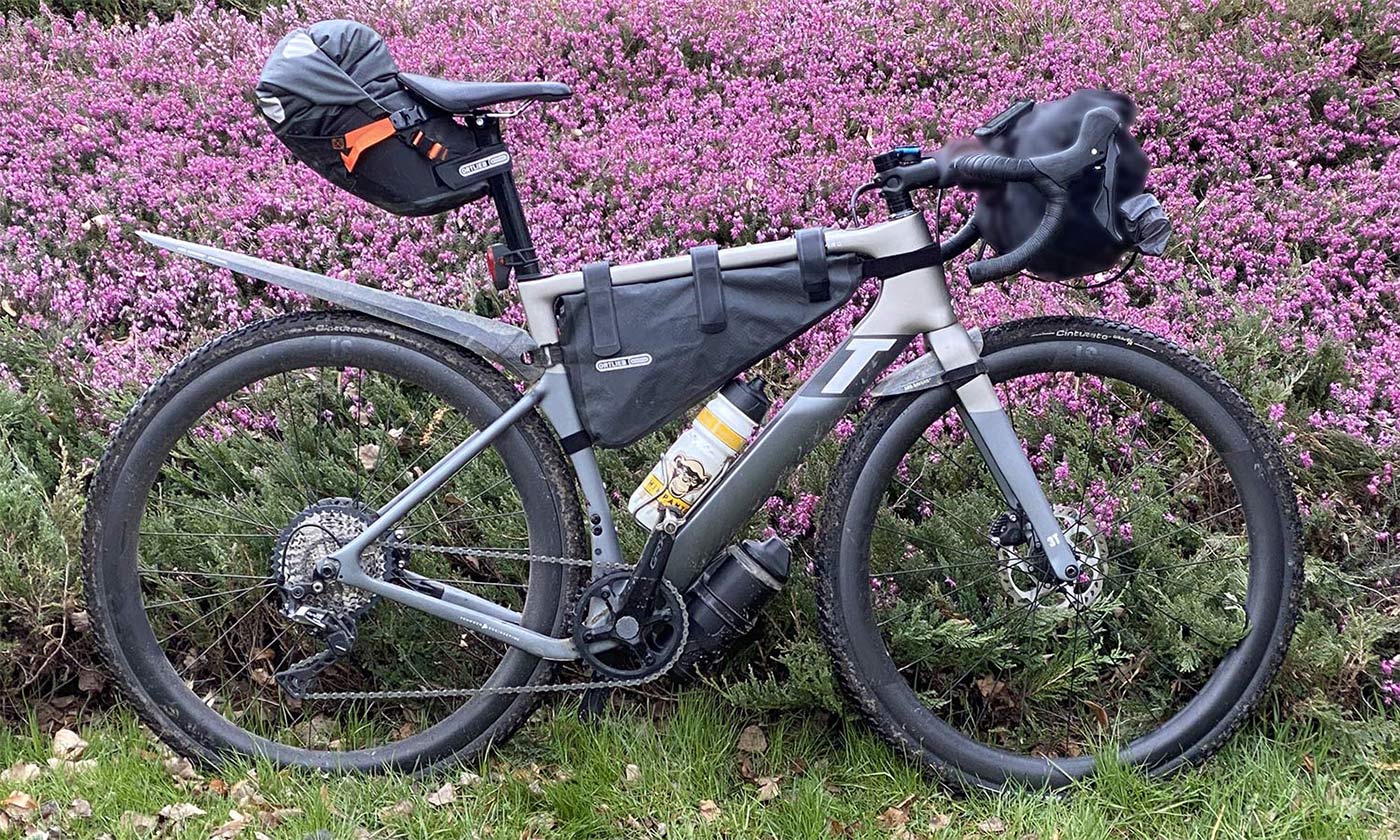 The Mahle ebikemotion X35+ secret of the new 3T Exploro RaceMax Boost gravel e-bike isn’t actually new. We’ve seen & ridden the same setup in bikes like the “world’s lightest e-road” Scott Addict RC eRide, as well as a number of other gravel & road e-bikes. But 3T’s integration of the system seamlessly into their already popular Exploro RaceMax gravel bike means that really you’ll be the only one who notices you’re riding an e-bike. 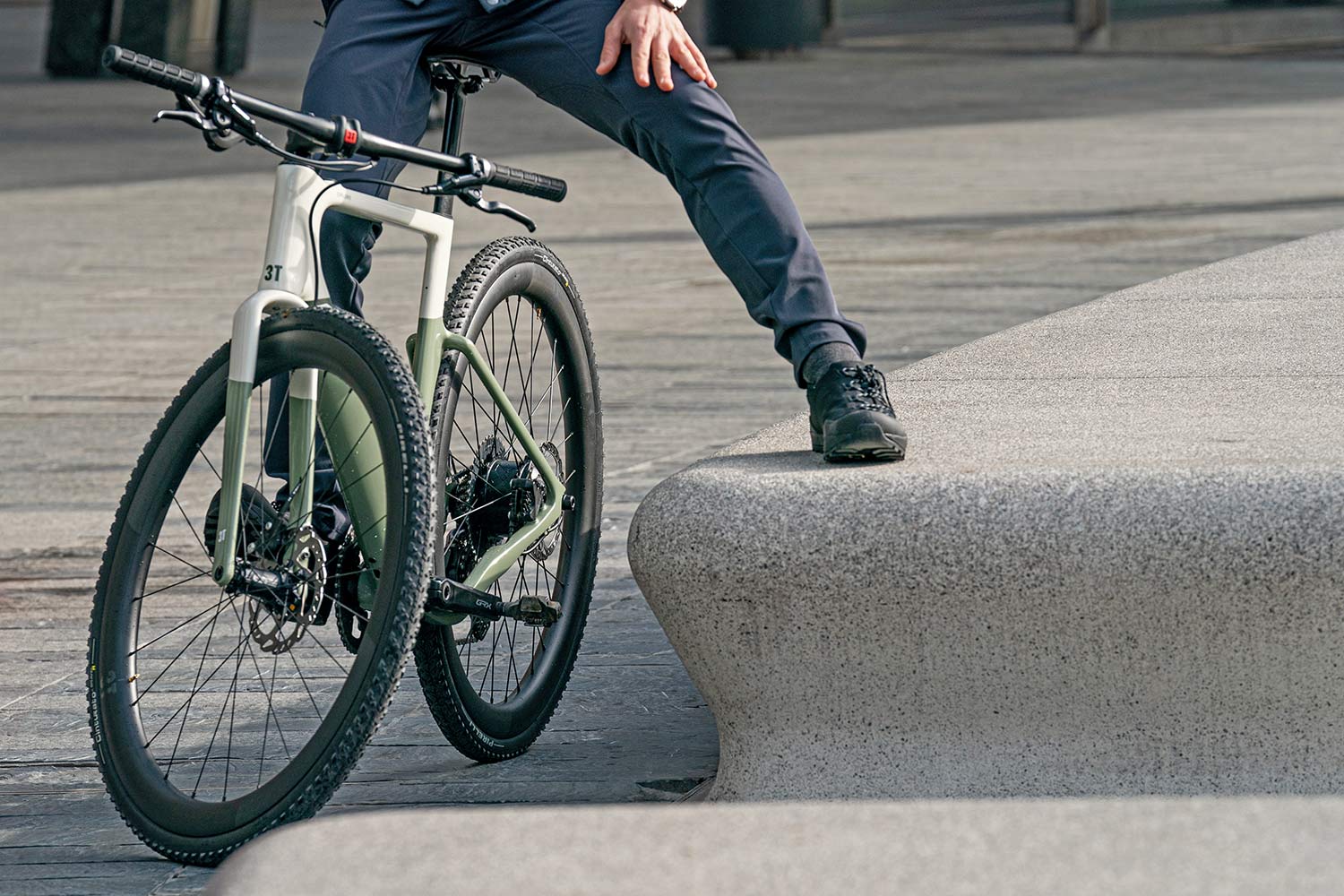 And that’s probably not a bad thing. This isn’t sneaky enough that anyone’s going to cheat in races, it doesn’t go fast enough to pose real safety concerns, it isn’t powerful enough to damage any trail more than a regular bike, and you really still have to put in a lot of your own pedal power to go anywhere on this e-bike. What it does, is level the playing field a bit across your riding group, or just extend the range of how far your adventure rides can take you.

Is it for everybody? No. But a number of cyclists will be happy for that extra Boost. 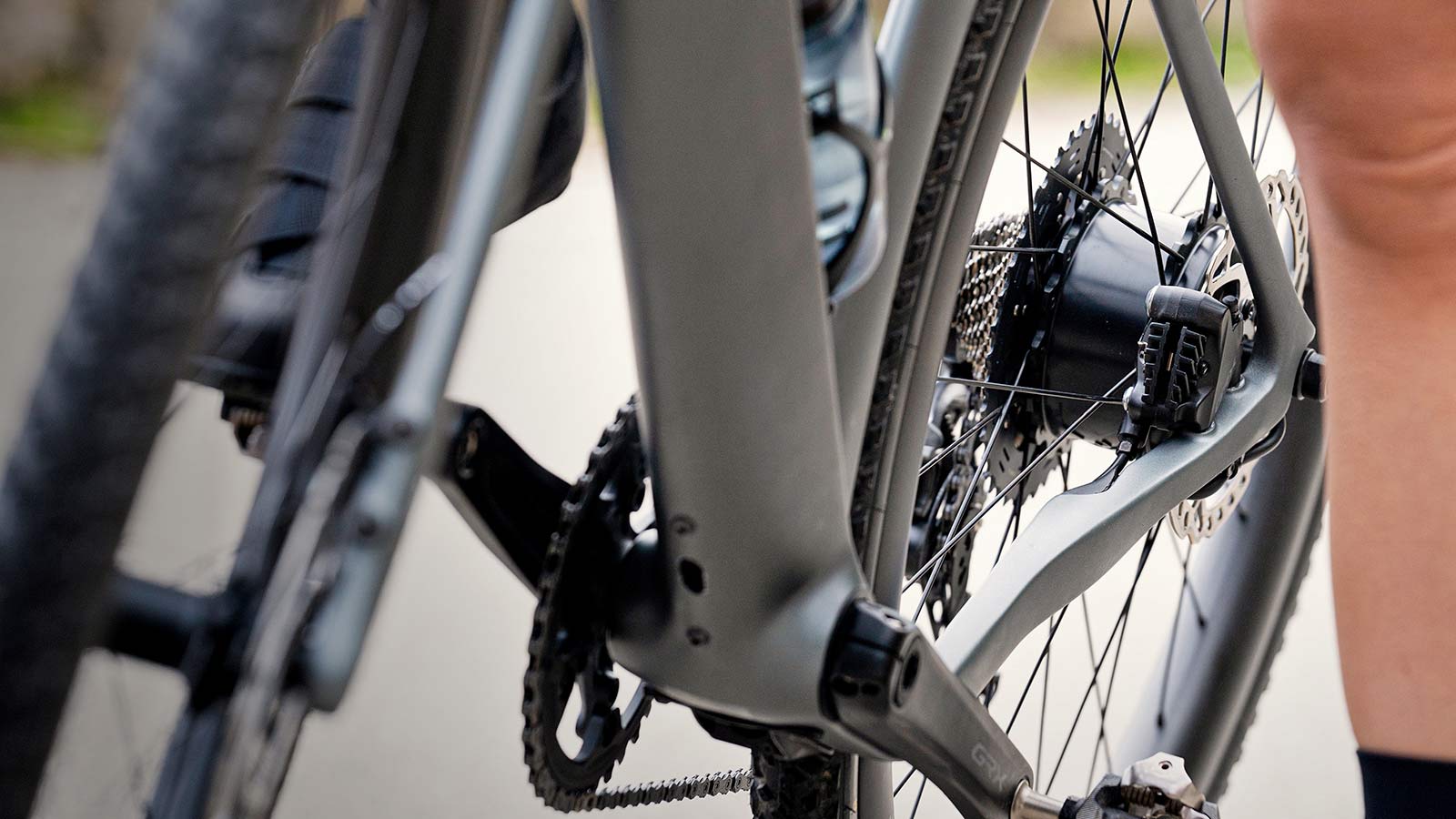 With 250W of pedal-assist coming from an ebikemotion X35+ motor in the rear hub and a relatively small & light 250Wh battery that fits inside the already huge downtube of the Exploro RaceMax, this 3T Exploro RaceMax Boost gravel e-bike is as stealthy as they come, helping riders extend their ride. 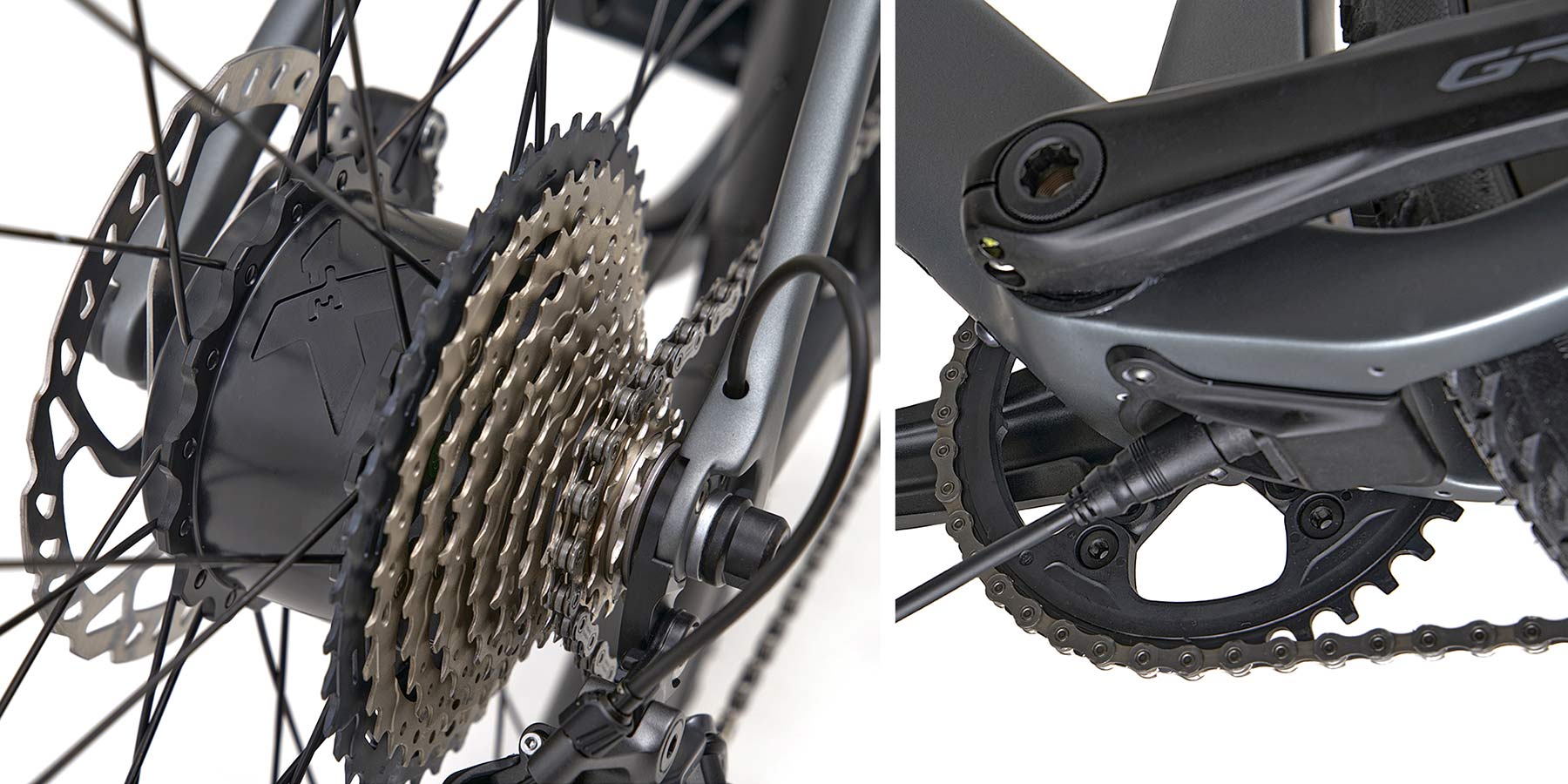 The internal system is charged through a forward-facing waterproof port under the bottom bracket, where you can also connect an optional ~600€ 208Wh Xtra Power range-extending external battery in a special cage. 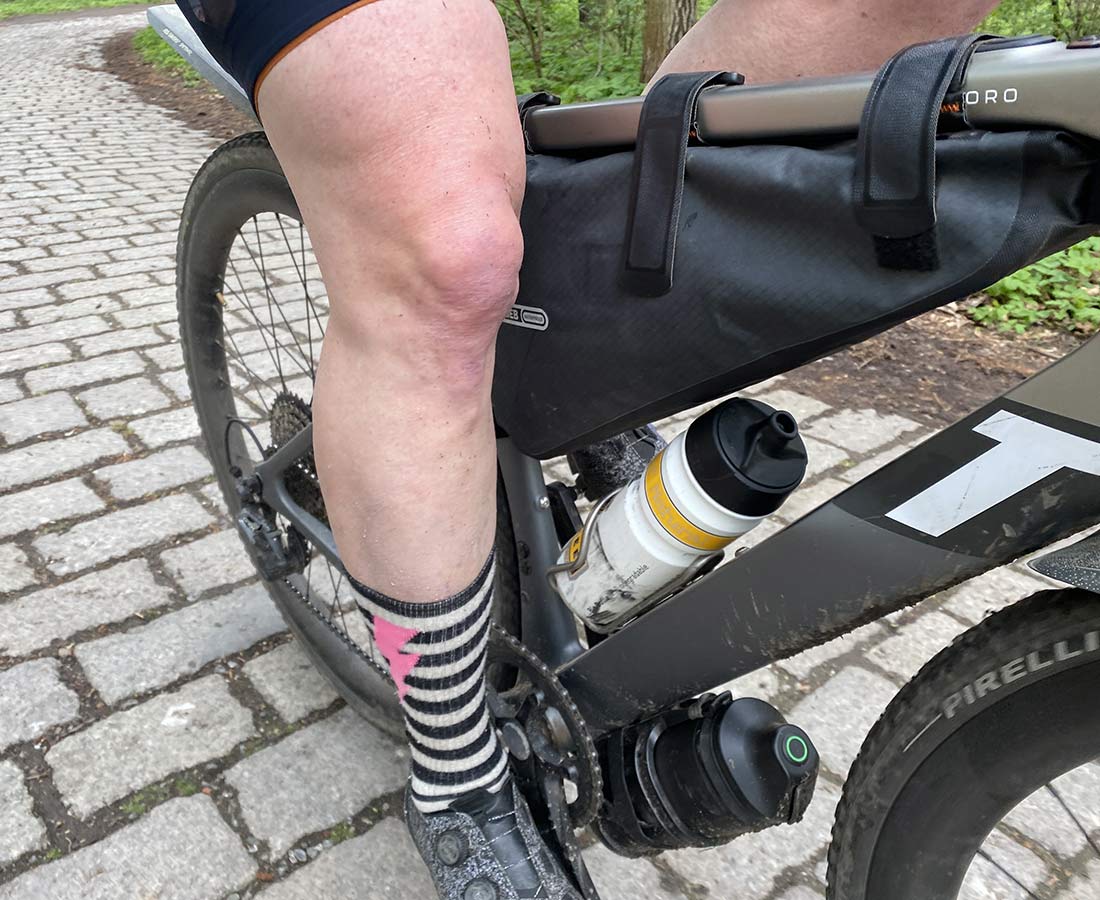 The X35 system claims a light overall system weight of ~3.5kg (7.7lb) and a smooth power delivery that feels natural on road or gravel. Adding a key feature that it has very little system drag once you overcome the built-in pedal-assist speed limit. That limit does vary from the 25kph top-end of assistance in Europe to the 20mph (32kph) in the US. 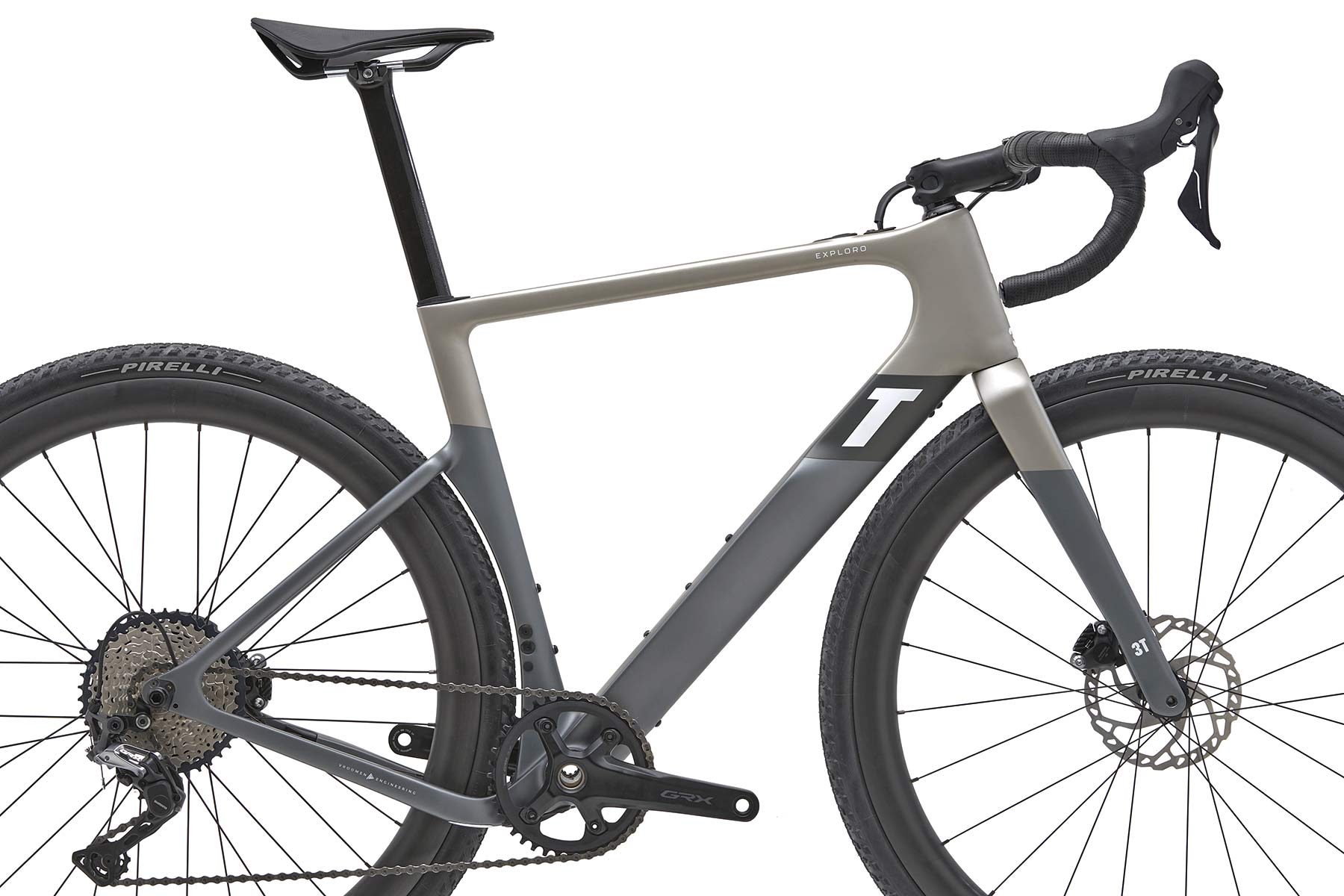 With a lot of gravel rides averaging around 22-25kph (based on my personal experience), that means a distinctly different experience on this type of e-bike in the two markets. EU riders are likely to see typically longer ranges but only support on the climbs. And US riders will probably see bigger boosts to their average ride speeds across the flats & climbs, but will need to use lower assist level modes to extend battery range. This e-bike shares almost all of the same features of the standard Exploro RaceMax – it is the same geometry in 6 sizes (XXS-61cm), the same aero gravel frame shaping, same tire clearance and accessory mounting (minus the bolt-on top tube bag mount). 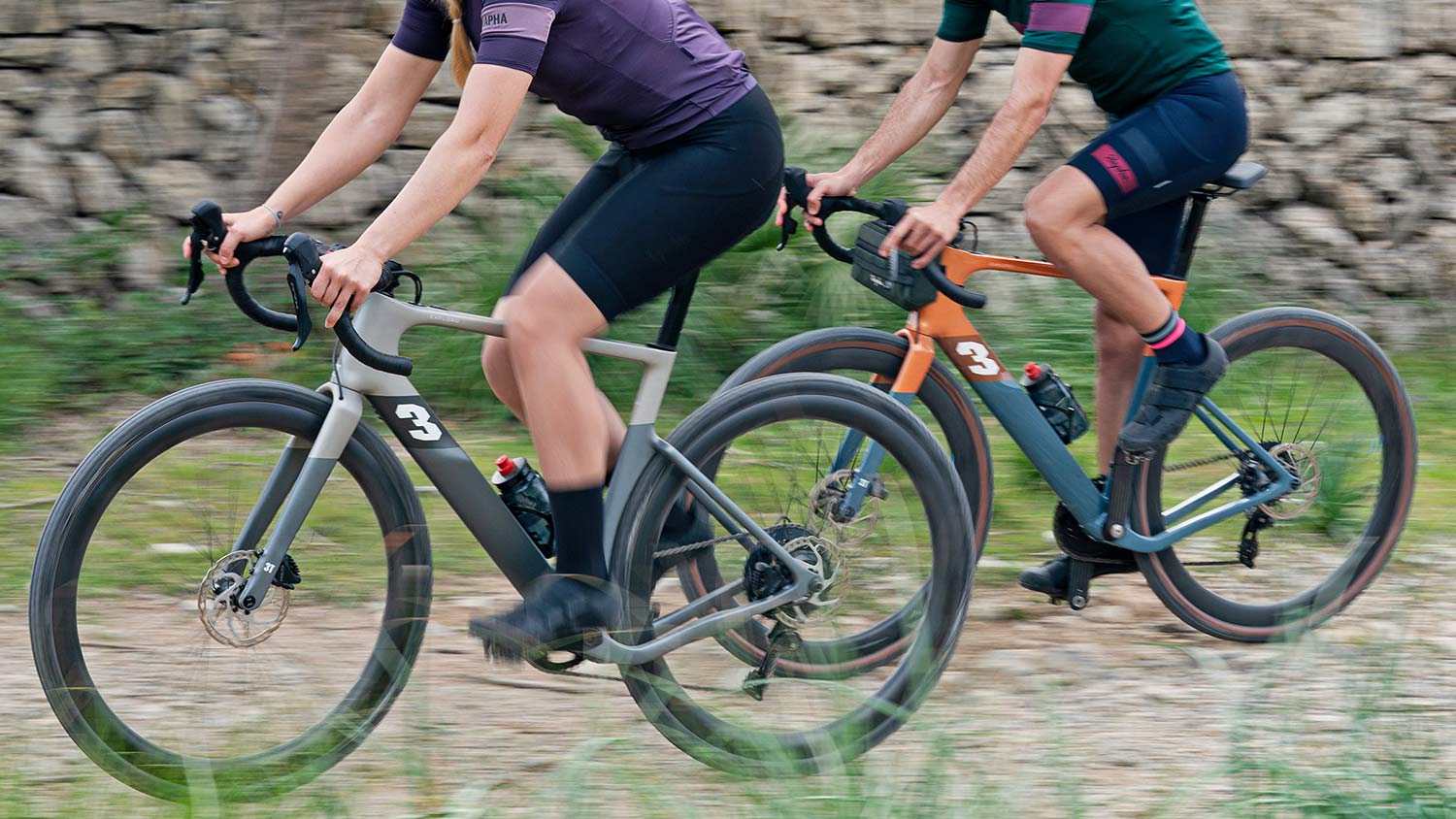 In fact, it seems that 3T just took the same carbon Exploro RaceMax molds and added some new holes to bolt the new battery inside, the single button iWoc One controller on the toptube, and tweaked dropouts to secure the rear hub motor.

The single illuminated control button cycles through the 3 support levels. 3T calls them:

Who is the 3T Exploro Racemax Boost is designed for? 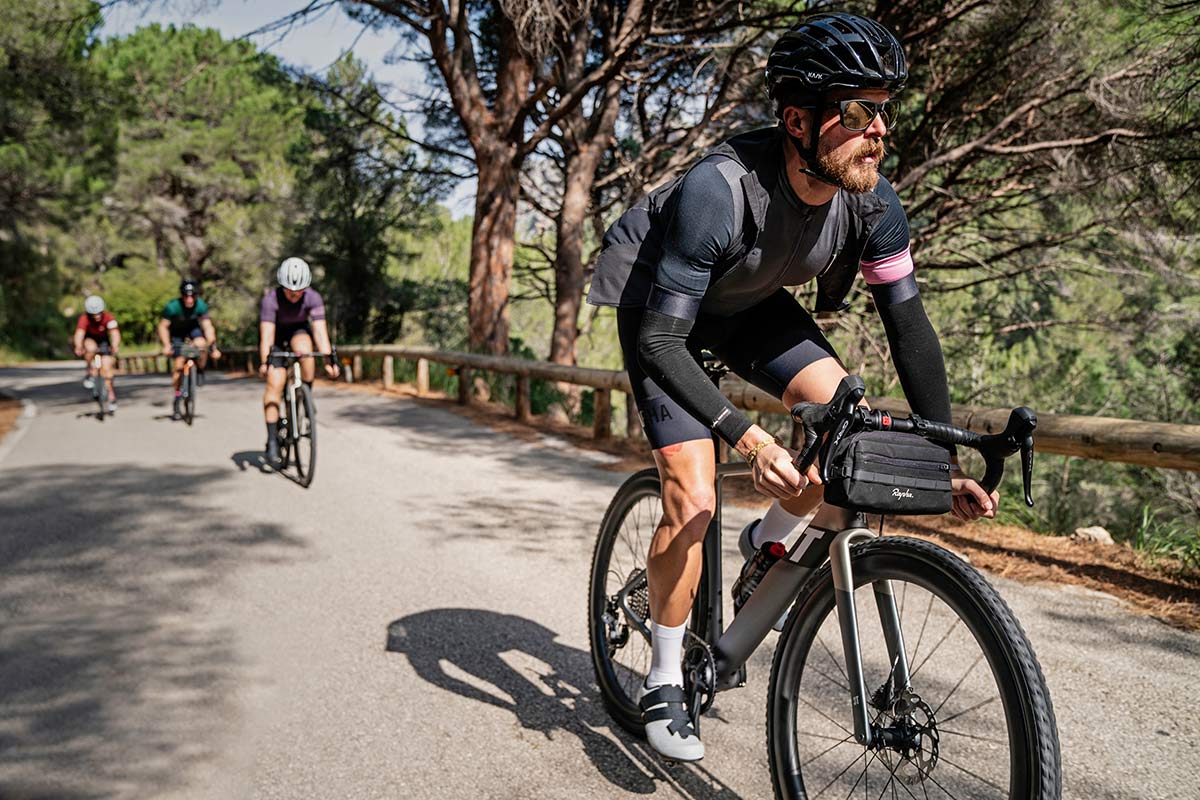 3T says they see three main type of riders who will benefit from the Boosted e-bike over their standard Exploro RaceMaxes. The most obvious is the rider who struggles to keep up in the group. Especially a big help on the climbs, the Exploro RaceMax Boost will level the playing field, while still making the rider work for it. And once you get faster than the pedal-assist you are essentially pedaling a heavier bike, so the faster you ride this e-bike, the faster you’ll end up training yourself. 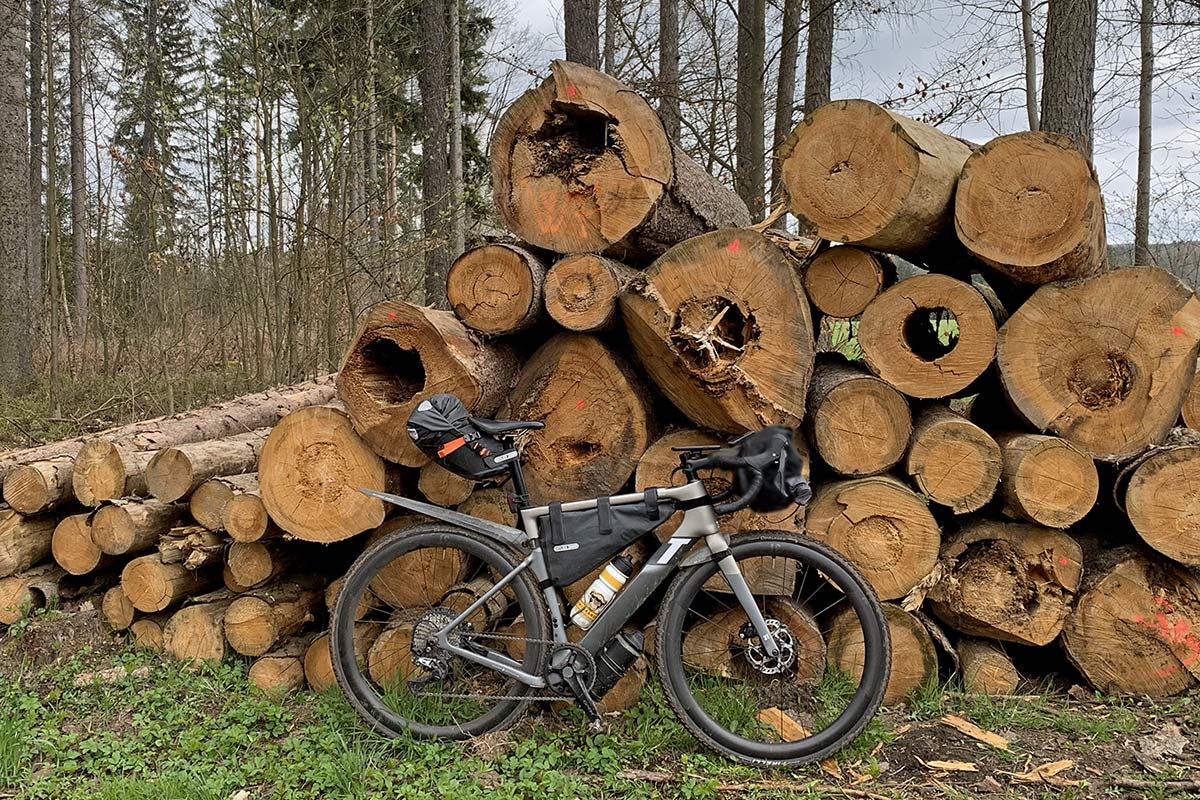 Another type of rider likely to enjoy the Boost is those just looking to go further. Whether that means doing a 100km ride instead of a 60km ride, or fully packing up the 3T Exploro RaceMax Boost to go bikepacking, the motor & battery will extend how far your legs can carry you. 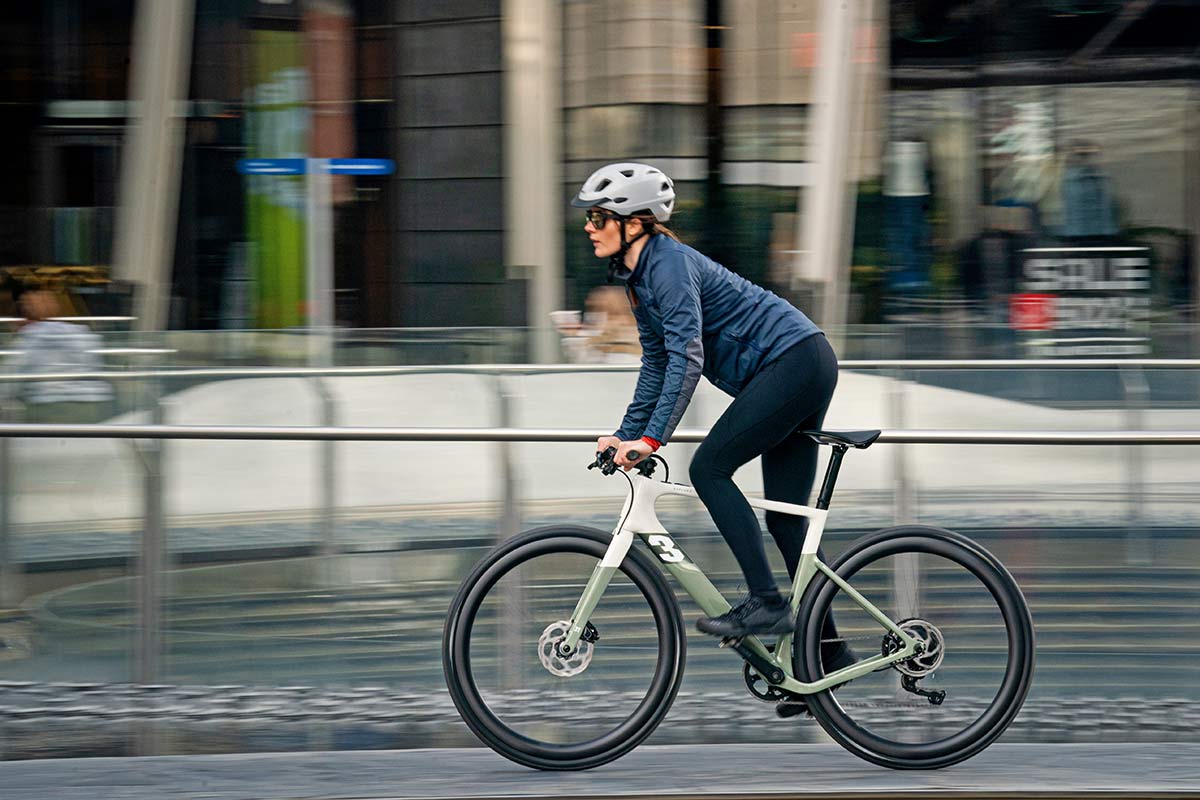 Lastly, commuting. I don’t expect many riders will buy such an expensive commuter bike, but either of the two rider types above will surely also benefit from the possibility of riding more easily to the office without getting as sweaty. I just assume they will all bring the RaceMax Boost inside because no lock will feel safe enough for leaving this thing on the street all day. 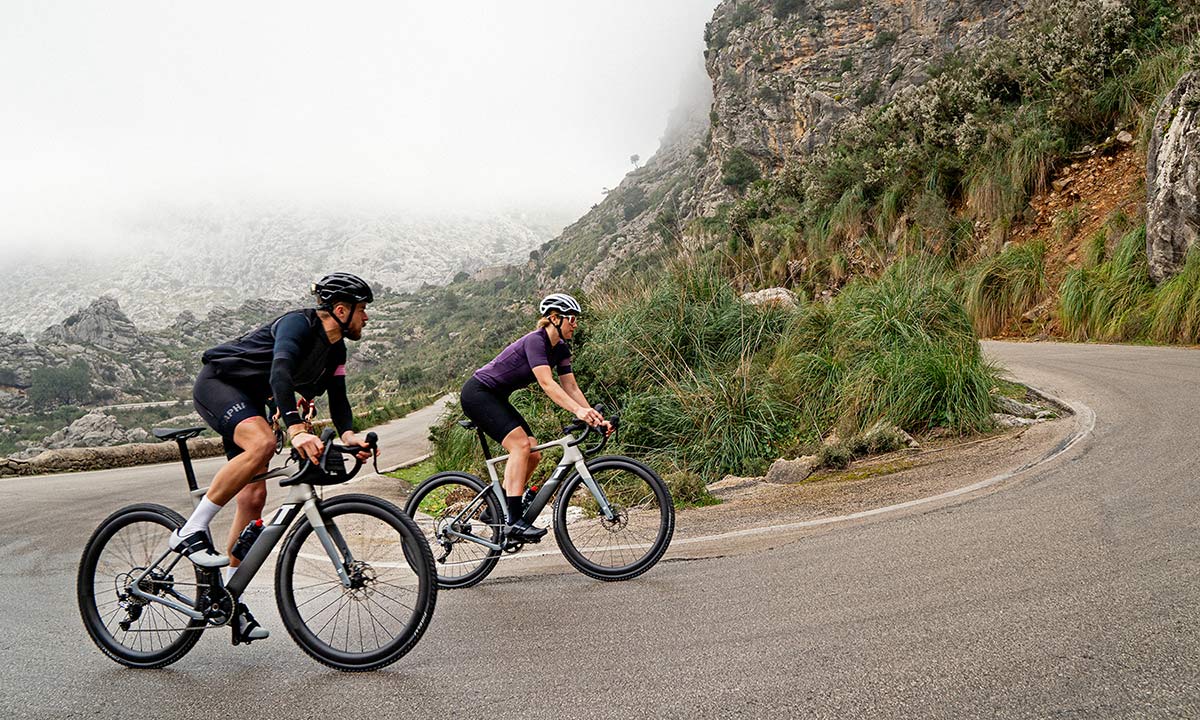 All that integrated tech on top of 3T’s premium carbon gravel frameset comes at a price. Three complete e-bike builds are being offered, that all share the same frameset & powertrain. 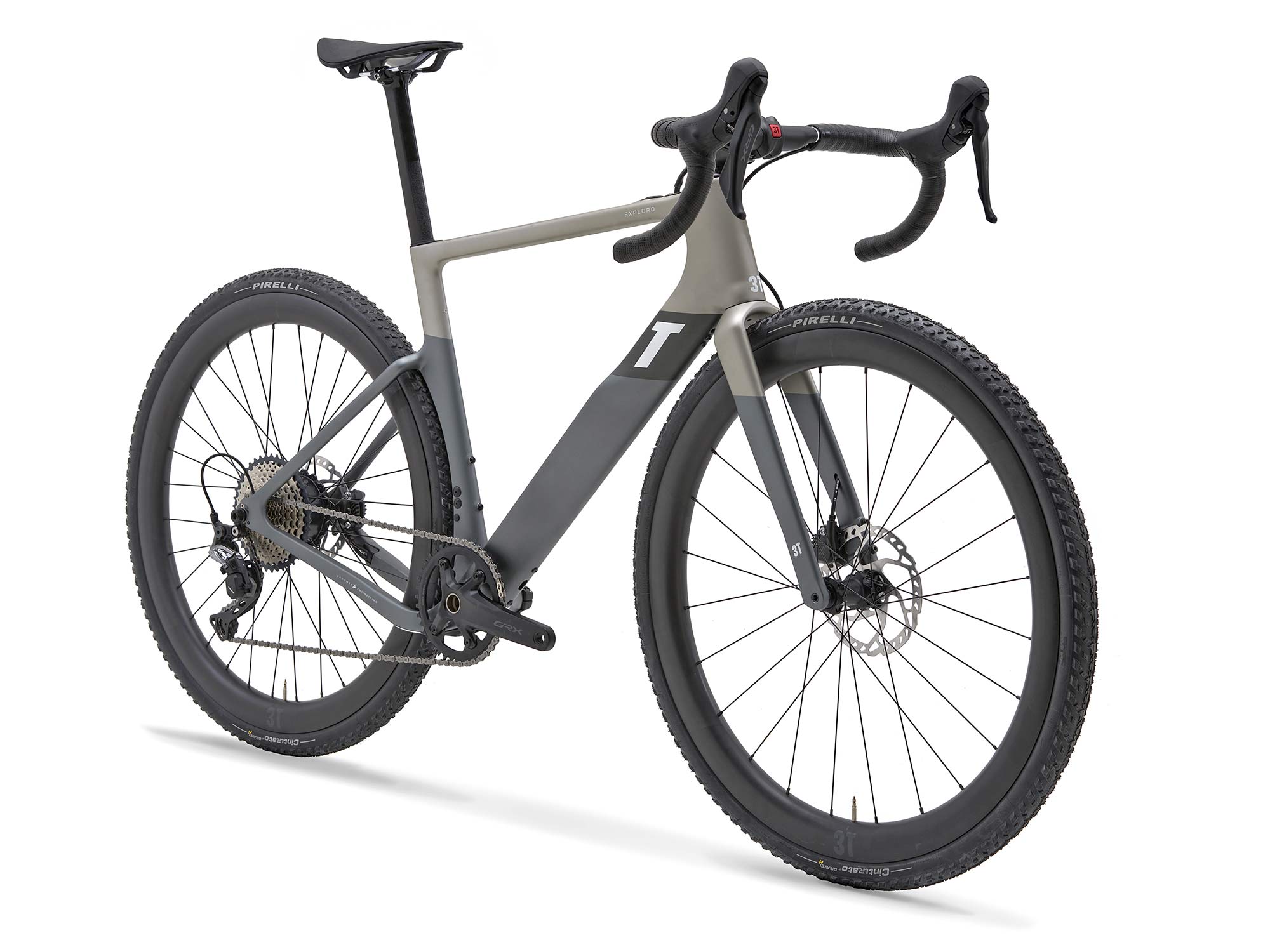 The $7000 / 7000€ Exploro Racemax Boost Dropbar is the standard gravel build like you see that we’ve been riding, with a Shimano GRX 1×11 mechanical groupset, alloy cockpit and top-tier 3T Discus 45/40 ultra-wide carbon wheels with the motor laced in, and a weight of 12.4kg complete. 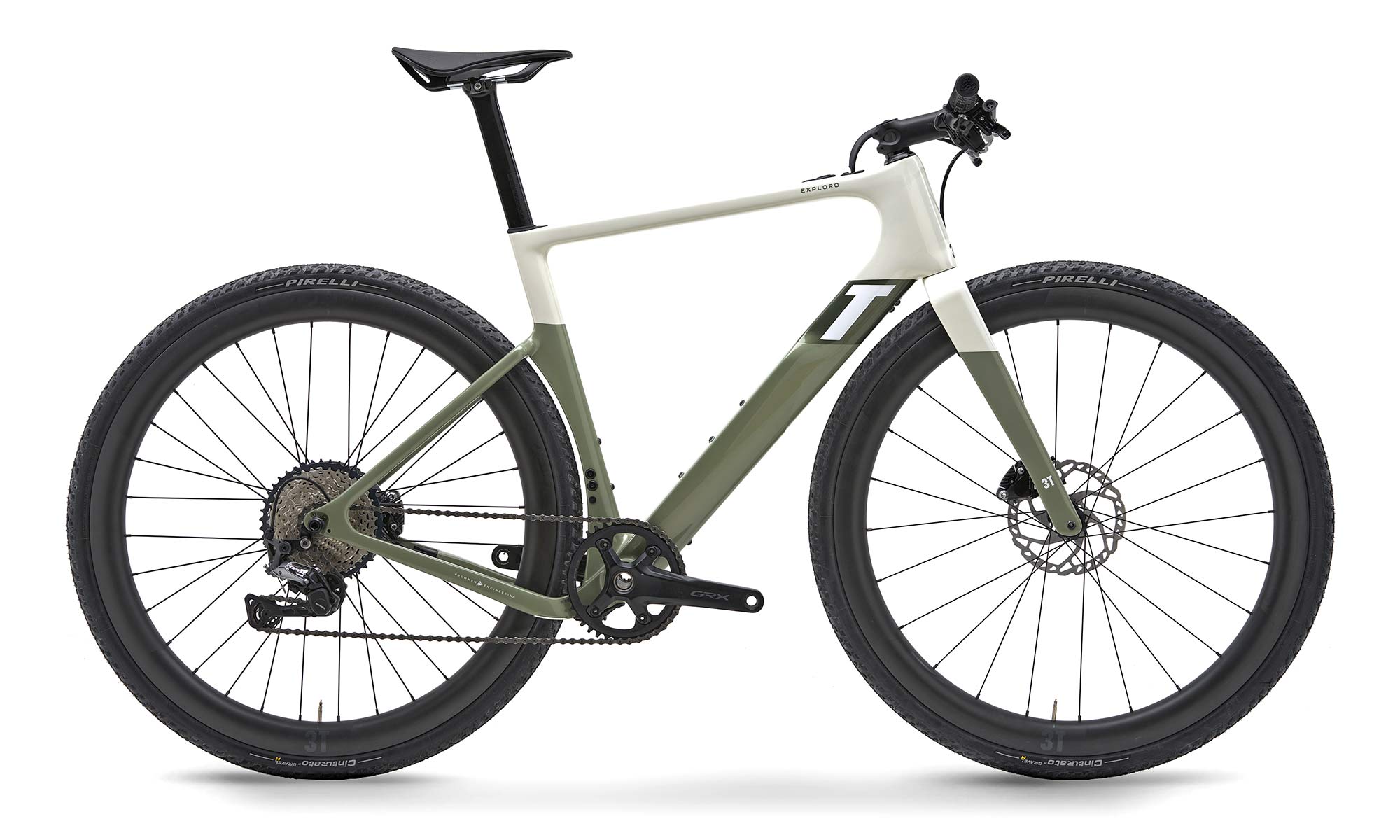 For the same price, the $7000 / 7000€ Exploro Racemax Boost Flatbar swaps in a carbon mountain bike handlebar for rider s looking for a bit more upright position on the e-bike and more control off-road, featuring the same drivetrain & wheels for a similar complete weight. 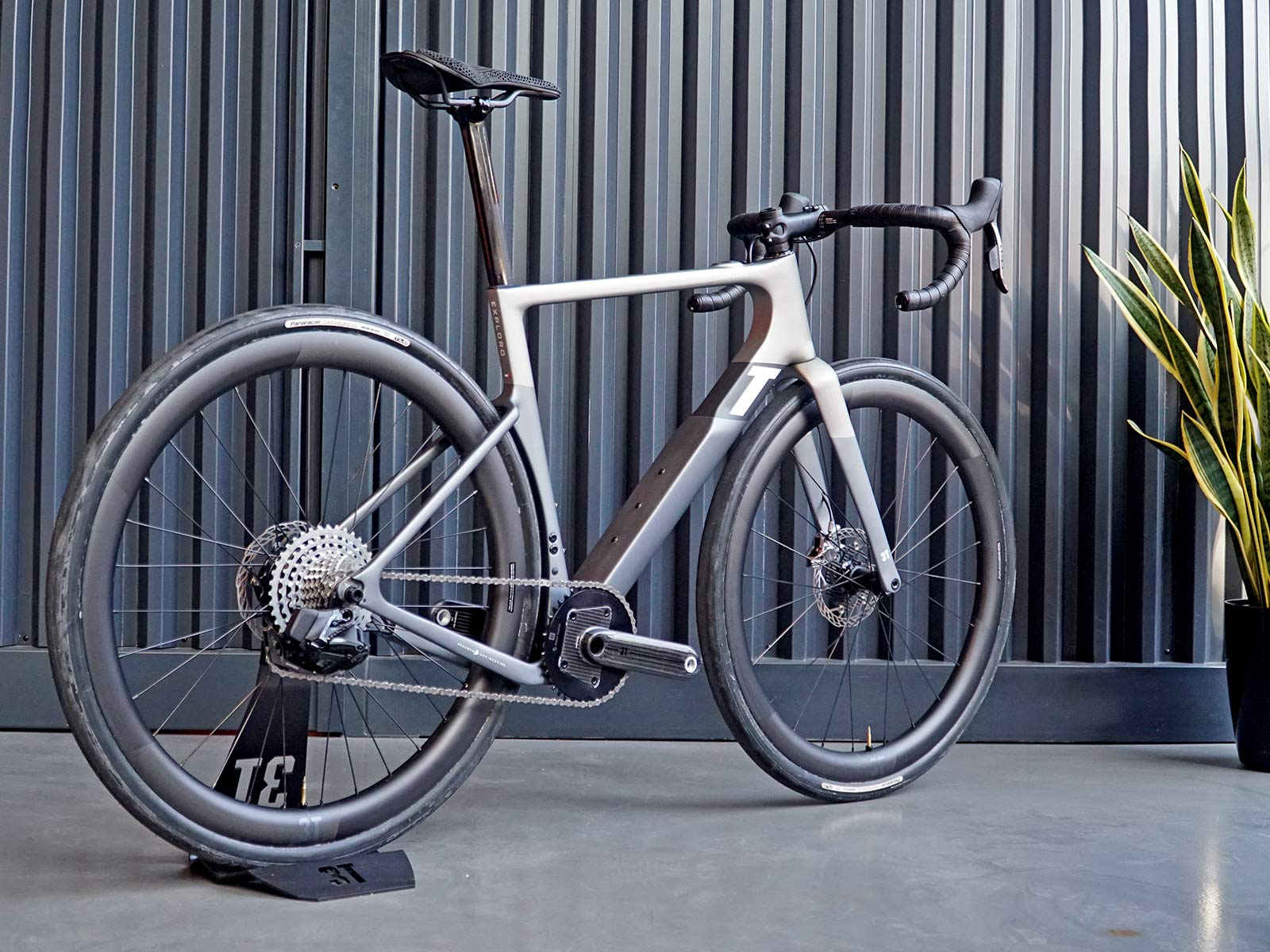 Lastly, an ultra-premium $10,000 / 10,000€ Exploro Racemax Boost Ultralight ups the ante with a switch to 3T’s Italian-made carbon Torno LTD crankset, a carbon 3T cockpit, and SRAM Red AXS wide 1×12 drivetrain with the same Discus 45/40 carbon wheels. 3T has shown us photos of a build at 10.9kg, but says the Ultralight can be built up as light as 9.8kg( 21.6lb) which would make it a kilo lighter than that “world’s lightest” e-road Scott!

All three versions are available to order now, with the first wave of the $7000€ e-bikes already shipped out to select 3T bike shops in Europe & the US, in limited numbers. Regular availability will have drop bar e-bikes shipping from around June, and flat bar e-bikes from September.

Really? Riding a bike is about fitness and exploring at your speed. Why go any faster than that? Not to judge others, but this really bugs me.

Agree. I haven’t tried one but it seems to me the parts of the ride I “dislike” are the same parts that give the most fitness benefits. If I have a button to make the burn go away, I’ll probably use it and miss out. I’m sure they are a ton of fun though…too much fun.

One benefit I’ve seen is partners riding together at the pace of the faster partner, not the slower one. More fun for both and they can both get the level of workout they want.

If you only have one hour to ride before or after work, why not ride a longer trail over a shorter trail? If your that person where time is limited, It can squeeze more miles and smiles in a shorter amount of time.

So you get to define what riding a bike is all about for others? I thought that was up to everyone to decide for themselves.

There loads more reasons for wanting a bike like this.

K-Pop is dangerous to your health
Reply to  mud

A good friend of mine who I used to road race against punctured a lung in a car accident few years back and now only has one. Still a pretty strong guy but can’t exert himself like he used to, especially on hills. So he shouldn’t be on a bike? Really?

So to every person out there with some sort of physiological issue who make up a huge segment of end users purchasing ebikes, mud has a gripe with you. According to his definition of what riding a bike means you’re doing it wrong 🙁

mud: Perhaps you have not ridden an ebike enough to know that it’s not about the level of fitness yet being able to go farther and faster. Having the assist means you can go easier, yet you can also go as hard as a non assist bike. Unfortunately there’s alot of assumptions from non-ebike experienced riders. Just because one is experienced on a pedal only bike does not mean you know the various ways an ebike rides.

Really curious to see what 12-speed HG cassette they’re running on the “Ultralight” model, since you can’t get an XD or XDr driver for hub motors yet.

That’s a Rotor cassette that installs on a splined freehub body.

“…it isn’t powerful enough to damage any trail more than a regular bike.” This comment in the story is based on conjecture, not evidence. So far we have seen that Class 1 and 3 E-bikes do no more damage to the trail than pedal only bikes.

Love the glamor shot of the Ultralight with the chain a few links too long.