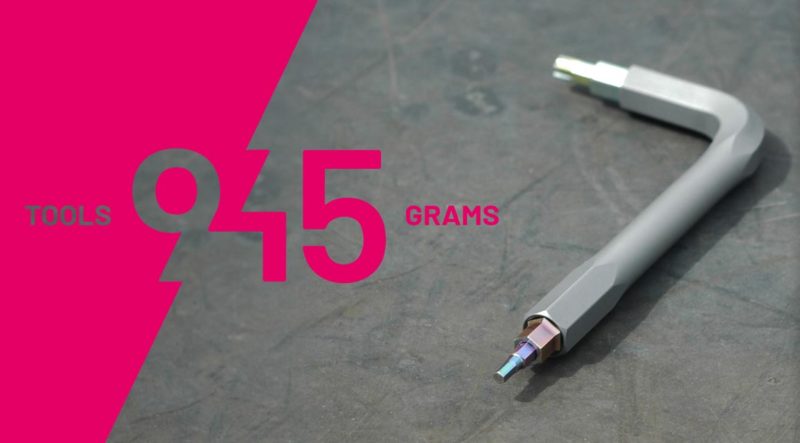 Many multi-tools have a problem. Most riders want more tools, which usually means more weight. It can also mean the tool itself gets wider as you stack tools on top of one another, which makes it more difficult to get into tight spaces. The idea of using replaceable bits is not a new one, but Daysaver has taken the concept to the next level with bits-in-bits to create a sleek, 9 function multi tool.

Starting with an ergonomically shaped L-wrench with 8mm allen fittings on both ends, the Daysaver then adds four custom bits to the mix. These bits are cleverly designed to nest together in many different configurations. 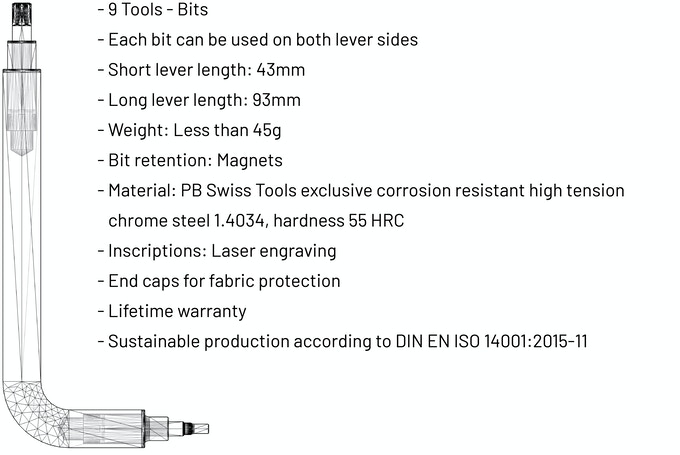 Each bit is also able to be used at both end of the tool which allows you to reach tight spaces, or use the full torquing ability of the L-wrench for removing stubborn bolts.

The bits are held into the tool body with magnets, and the whole thing is manufactured by PB Swiss Tools out of their exclusive tool steel. Even with the steel construction and the different bits, the tool still weighs in less than 45g. Partnering with PB Swiss Tools also allowed Daysaver to test the tool extensively, proving that the key can withstand up to 97Nm of maximum torque. The bits are even stronger, meaning you shouldn’t have any problem with your average trail-side repair. 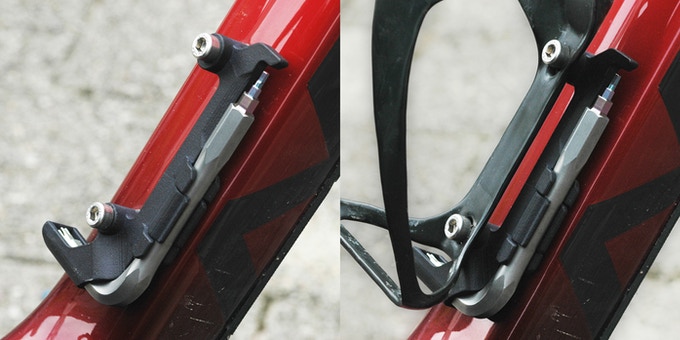 To make sure you’ll always have the Daysaver at the ready, there is an optional bottle cage mount which can be used with or without a cage. Note that even though the bits are held in place with magnets, the mount has physical stops to prevent any bits from bouncing out on the trail. 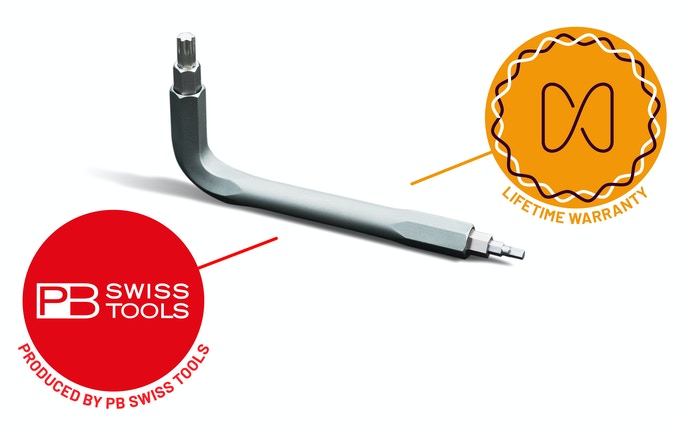 So what’s the catch? Well, Swiss made tools are known for their quality, not necessarily their affordability. Even at the Kickstarter pricing, the Daysaver tool starts around $66 without the bottle cage mount. After the Early Bird pricing is gone, the price jumps to $77, and if you want the mount you’re looking at $109 for the full package. But if you’re spending big dollars on super light weight bicycle components and still carrying around a clunky old multi-tool, the Daysaver certainly looks like a clever piece of kit. If funded, the tools will begin shipping in January, 2021.

That pricing is peak cycling industry. A complete piss take.

It’s beyond the cycling industry. It’s the permium tool industry. Judging by the quality of the many tools of theirs I have, and the price of their non-cycling oriented tools, this pricing is completely inline with what it should be costing.

This is premium branding, not premium quality. And it’s way beyond what would be considered premium pricing. It’s a small hollow Allen key with interchangeable heads and a <0.50cent mounting bracket. Actual premium (gold standard) tools are nothing like this expensive. What's better than Wera? Nothing. Their pricing looks cheap compared with this.

Wera makes fine tools, so does PB Swiss. They are found in a lot of mechanics boxes and are quite the quality tool. I have a set of Wera hex wrenches and torx wrenches and I don’t dislike them, they are fantastic but I do like the feel of the PB Swiss wrenches a little more. The colored sleeves are a touch bulky but I do like the actual tool engagement.

In many cases one tool brand isn’t going to be the be all end all for tools. Plenty of great tool manufacturers out there who serve different purposes.

In terms of this tool it maybe seems a bit much cost wise but would love to try it and play with it for a while. It seems like if nothing else a neat enough concept.

Not for nothing…. but FixItSticks has been making a competitive product for many more years, is only 6 grams heavier than this device, is WAY more effective/useful, and at 1/3 the cost… sounds like easy math to me; but maybe you just have so much disposable income that 40 extra dollars doesn’t mean that much. That’s $6.67 per saved gram BTW…

A key trailside repair is swapping out a damaged derailleur hanger for your spare. It doesn’t look like the bits are long enough to engage the tooling on a derailleur to remove it from the hanger? Deal breaker. Oherwise I’d be purchasing.

Theres plenty of length to remove a derailleur fixing bolt.

Interesting thing about the bicycle industry and pricing; the internet complains to no ends about the price of this and that, yet all these high priced things sell like crazy. They can’t keep up with demand. What does this say about the comment sections of news outlets like this?

Cramer
Reply to  K-Pop is dangerous to your health

Here’s another Swiss-made tool that’s a fraction of the cost (though you’ll need to separately buy the specific bits that you need for your bike).

Here I am like “oh finally a tool that’s better than the victorinox multi because it keeps its utility while being smaller lighter”.. and/.. well its also made by PBTools haha.

Now for 110USD no thanks, i’ll keep the older version, but its well designed.

Great. Thanks for your backing!

I don’t see this as very useful. Turn some fasteners? What about a chain tool, tire levers, bacon stabber? There is a reason multitools have the size and tools they have on them.

I would definitely take Wera over PB Swiss, but the point is not that they are poor quality – far from it. The point is their own branded product range is nothing like this dear (think half price). I don’t know whether Daysaver are an independent third party (there’s no info available), or if PB Swiss realised that establishing another cycling specific brand through a Kickstarter meant that they could likely triple margins….

The Kickstarter campaign makes it clear that Daysaver is an independent third party contracting/partnering with PB Swiss to make the tool.

So the Daysaver people have to make their own margin, and the campaign also shows that almost 20% of the cost is for fulfilment, taxes, and fees (Kickstarter’s margin).

Without seeing ownership documents or contracts I wouldn’t take a kickstarter blurb at its word. There are constantly instances where they are misleading, and they are indeed a new brand and in no way independent. That’s not to say it’s the case here, but frequently it is. Also, you do realise that PB Swiss act as an OEM for others, including the Victorinox tool mentioned by others …. which is a fraction of the price. They’d have a shitload of margin at €50. There’s almost nothing to the tool.

I miss my titanium Kool tool…

I see this as more of a road bike tool. It’s small, light and will rarely get used.

I bought a set of FixItSticks and found them heavier and less useful than my conventional set of hex wrenches that I carry with me everywhere. However, the included link tool (chainbreaker) is the most compact one I’ve come across so I added that to my kit and have never used the rest of the tools.

The FixItStick design is not good. It got a lot of hype and traction but it’s just not a great tool.
PB Tools are awesome in my experience, because they don’t just make them look cool, they function great.

My current Victorinox multi tool (made by PB Tools) is the lightest and extremely useful – much better than your typical multitool (even the heavy ones!). Their new one here seems to share similar design features, but is lighter, which I can only assume means it works great as well.

The only thing that’s missing is a chain breaker, and for that the only solution I could is to take apart a lezyne carbon multitool and keep their chainbreaker – its very light and works great. But 100usd+ to just keep the chain breaker is crazy (I bought mine as a broken tool on ebay, got lucky I guess).