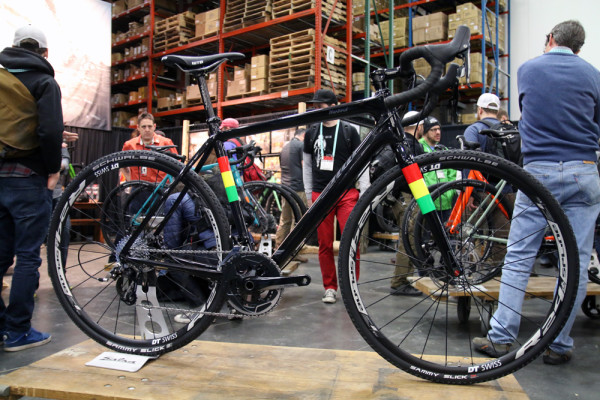 As long as there have been road bikes, there have been riders pedaling over gravel roads. While the surface is nothing new to cycling, the way riders experience probably has. Now home to grueling races covering huge distances through varied conditions, gravel races present a unique set of challenges for bicycle designers.

For Salsa Cycles, the company has no problem stating that they own gravel. Many bikes have been created that function on multiple surfaces, but when it comes to gravel race bikes specifically, there aren’t many that can rival the Warbird for their racing pedigree. That bit of bragging that goes against the company’s self proclaimed “Minnesota Nice” demeanor comes at the unveiling of the all new Warbid gravel bike – a lighter, more compliant race bike available in both carbon and aluminum…. 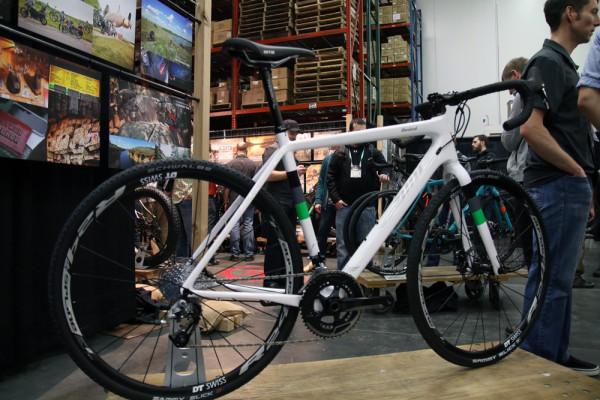 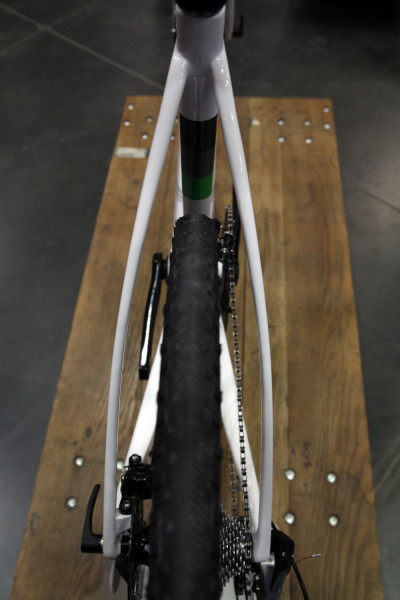 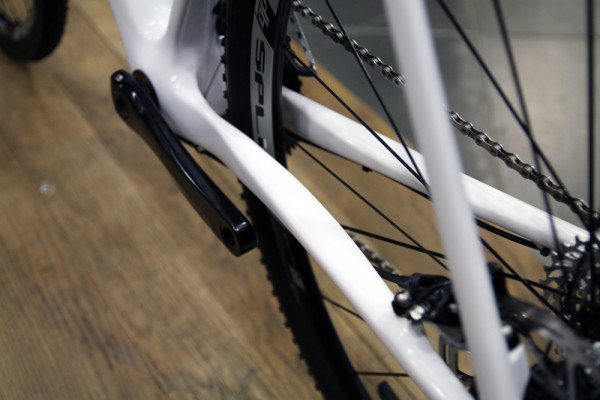 All new for the Warbird is the addition of a carbon fiber frame to fill in as the top end model. Available in two colors, the Warbird Carbon Rival 22 will retail for $3,499 complete, or $1,999 for the frameset in black. In addition to being a full pound lighter than the previous aluminum Warbird frame, the carbon frame is dramatically more compliant thanks to the Class 5 VRS system. Named after a grade of gravel, the Vibration Reduction System includes the slender seat stays which are vertically oriented and bowed to the outside. When combined with the lack of a brake bridge, the stays help keep the rear end comfortable.

To counter those forces and keep the drivetrain efficient, the chainstay orientation is flipped – with the profile wider than it is tall. Bolted together with a 12x142mm thru axle, the carbon Class 5 VRS frame results in a 9% vibration reduction compared to the previous titanium Warbird frame. The aluminum frame takes advantage of the same Class 5 VRS system and also sees a 6% improvement over the titanium Warbird as well.

The seatstay and chainstay design also allow for an increased maximum tire size with the carbon frame capable of running 44mm tires, and the aluminum frame with 42mm tires. Claimed weights for the frames include 1210g for a 56cm carbon frame and 1600g for the 56cm aluminum frame, with the fork coming in around 410g. 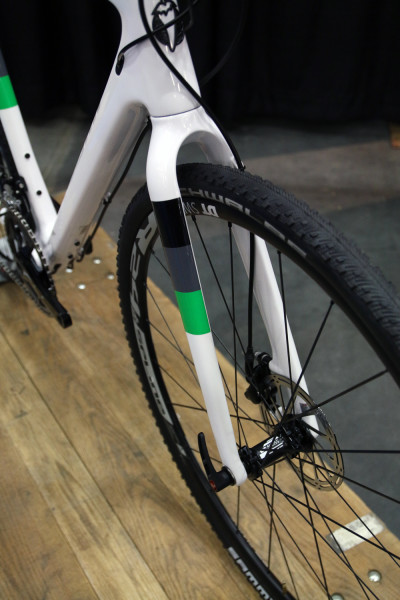 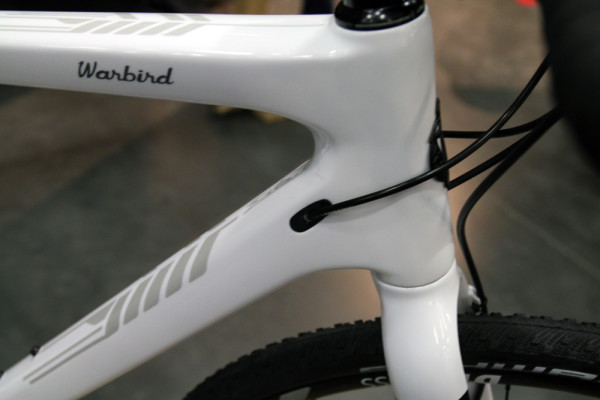 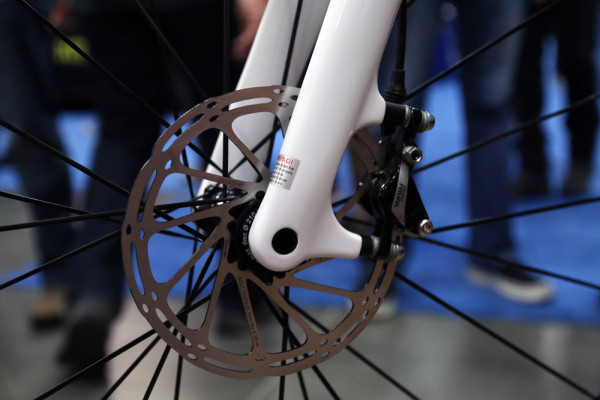 Up front, all Warbird models are equipped with the Warbird Carbon fork. Utilizing a DT Swiss RWS 15x100mm thru axle, the post mount fork uses a 1 1/8-1 1/4″ tapered steerer which Salsa says provides the best mix of weight to strength for the build. The full carbon layup is designed to match the ride quality of the Class 5 VRS system in the rear, which is why they went with their own fork instead of using something like a Whisky no.9. 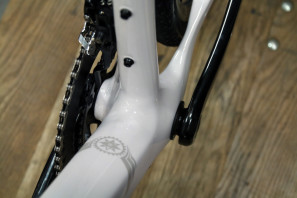 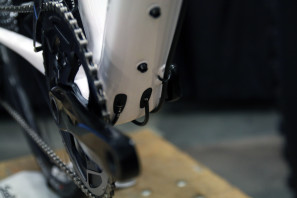 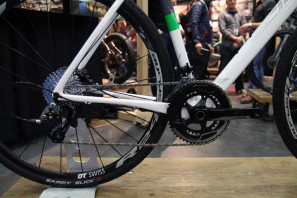 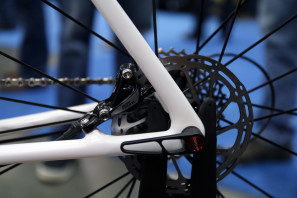 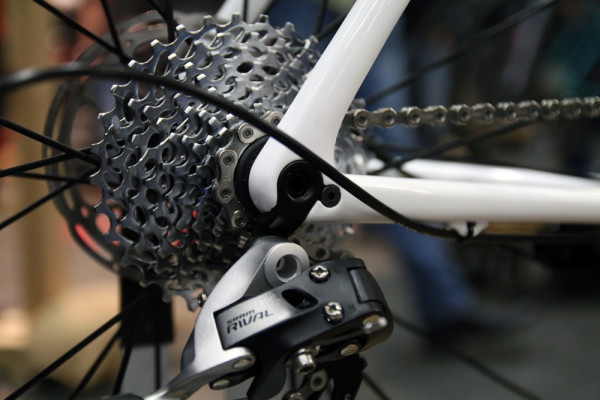 All models rely on internal cable routing for the shift housings, but the brake routing provides the choice to be run internal or external. Press fit 86 bottom brackets are found on both carbon and aluminum frames.

Geometry wise, the Warbirds are exactly the same as the previous models with the exception of a lower stack height to allow for more aggressive riding positions. While not a huge focus for the bike, touches like this and the internal cable routing improve aerodynamics which should help when you’re fighting cross winds across Iowa. 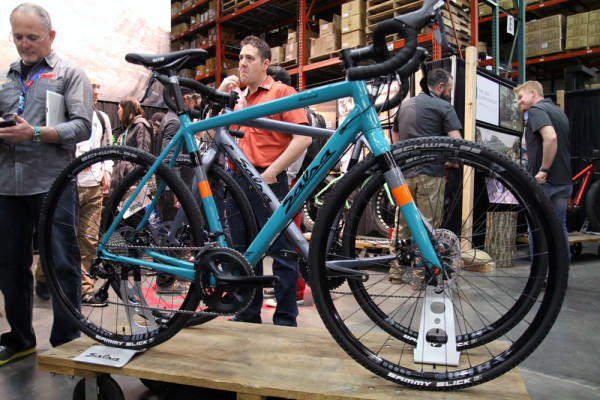 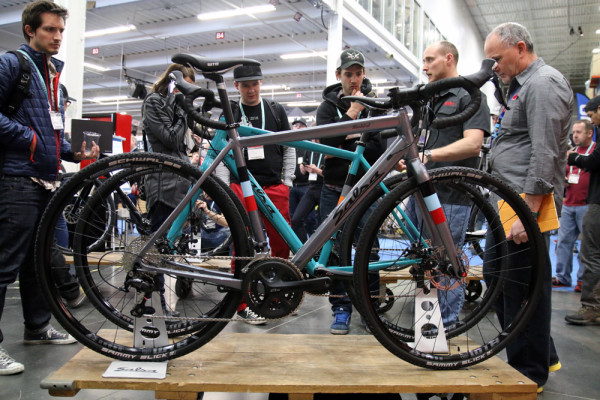 Along with the two carbon Warbird models, there will be an additional 4 aluminum models with the Warbird 105 11 speed for $2,499 complete and $999 for the frameset… 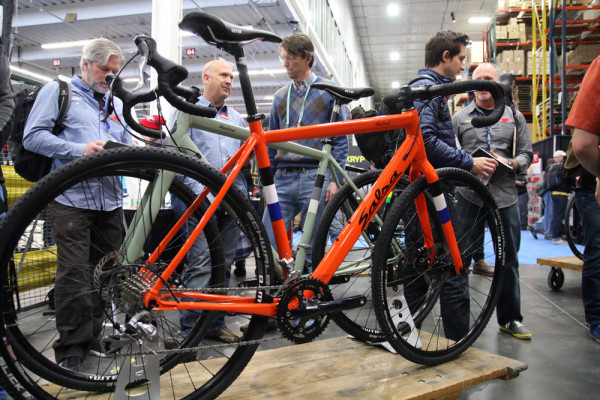 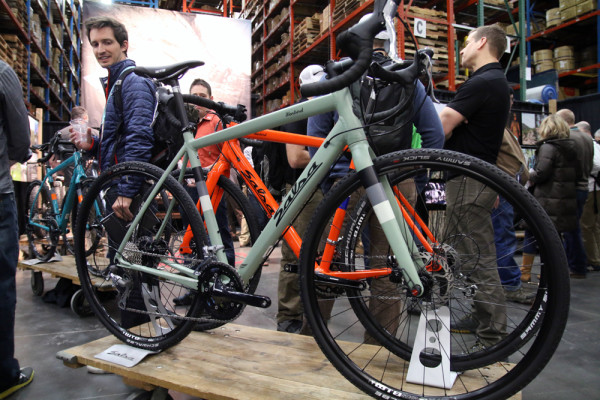 Plus the Warbird Tiagra build which will sell for $1,999 complete and the same frame as the 105 bike. Framesets will be available in the mint green Tiagra build and blue color for the 105. 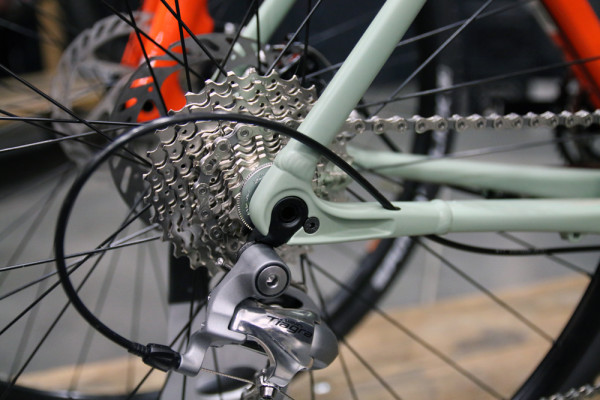 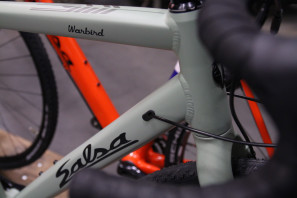 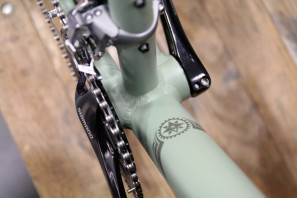 Other than the change in materials, the aluminum Warbird is built to be very similar to the carbon frame. Internal cable routing, press fit 86 bottom bracket, thru axles, and post mount disc brakes should make it a pretty popular option.

If you’re itching to get your hands on the new Warbird, the aluminum models are in stock now with carbon frames on the way for summer 2015. 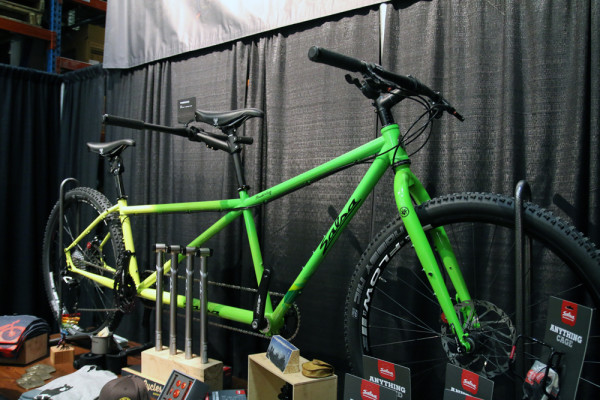 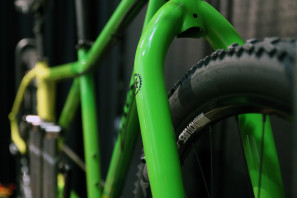 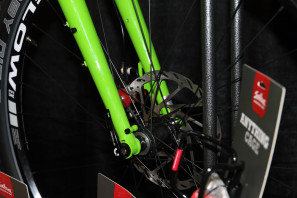 Obviously a mountain bike first, the new Salsa Powderkeg tandem is another bike that Salsa expects to see gravel. Engineered around 29×2.4″ max wheels and tires, you may remember the Salsa mountain tandem from previous Frostbike experiences. According to Salsa, the frame has undergone numerous design changes and improvements and a lot of testing (including finishing the Tour Divide). As you can imagine, two full grown adults on a tandem meant to go off road will be putting the frame through a lot of different stresses and Salsa wanted to be sure the frame would be perfect for its release.

The 4130 chromoly steel frame is paired with their tandem specific Powderkeg steel fork which happens to be the strongest fork they’ve ever made. If you look at the fork legs themselves, the cross section is larger than most downtubes for normal steel frames. The tubing size, plus the 15mm Maxle light and 1.5″ tapered steerer tube is what gives the fork its impressive strength. However, the frame can also be run with any tandem rated 100mm suspension fork for 29″ wheels. 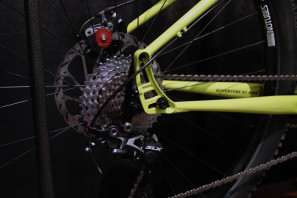 At the back of the bike the Alternator dropouts allow some flexibility with the set up, and Salsa chose to go with a standard twin pinch bolt eccentric bottom bracket for the timing chain. Specified with three pack, and low rider mounts, the Powderkeg is capable of carrying 9 water bottles which is important for long distance events. Sold in three frame sizes, the Powderkeg will come in Medium Captain/Small Stoker, Large/Small, and Large/Medium.

Wow, oh wow do I love the understated graphic design / classic stripes. Whoever did the color ways should be given a big fat raise. Wow! : )

Real shame the carbon frameset isn’t going to be available in white, had it all built up in my mind allready…

From the video on their website that for looks prety flexy though, wonder how it handles braking.
If only there could be a website to do a proper review of this bike. *hint* *hint*

Yeah, I love those paint-jobs! Every version looks awesome. And glad to see this version of the Warbird can fit bigger tires. Limiting the old warbird to 35mm seemed weird…

Bummer name. Sport is not war.

@ Micah – Forget the rack mounts and use framebags seat packs from companies like Revelate.

And as usual, no fender mounts. Super cool features/stats, but you can’t reiably ride it year round.

Cool. Glad they lowered the stack height. The Casseroll SS and CCC gave me a lot of good memories but they sat too tall for me.

@Micah – That is exactly why I chose the Kona Jake the Snake over this bike… The JTS really is more of a do-all machine, though it is in many ways similar to the Warbird.

Paint does look awesome though…

Get a Vaya. Warbird is and always has been a racing bike. You can also buy after market fenders that strap onto the frame, and they’re cheap. Salsa/Warbird completely outclasses anything Kona has to offer.

I have friends who run 38c tires on 2013 Warbirds. CX0’s and Challenge Gravel Grinder tires. Plenty of clearance.

Salsa is getting better and better every year. Small company, cool bikes.

I usually run 41 Knards on WTB 29 Stryker wheels on my Warbird with non problem at all.

Awesome bike. Want, but it would be a summer-only ride. No fender mounts make it non-viable in the PacNW for half the year or more. And when are companies going to start offering replaceable frame protectors for gravel bikes? A couple long gravel rides, especially in dry weather, can make a frame look like it was hit with birdshot pretty quickly.

The only problem I’ve been seeing with Salsa lately is that as they try to keep up with the latest tech, especially carbon, their prices are going up. Still more affordable than a lot of the silly $10k road bikes on here, but they’re getting further and further out of reach for me.

You want a year round do-it-all with rack and fender mounts? Don’t forget the Vassago TKO.

Salsa Rasta is BACK!!!!! I was so sad to hear from an inside source they were pulling away from it. BRING BACK THE RASTA!

It seems ironic that bike manufacturers and are scrambling to put out wide tired varieties in road and MTB when they were the ones pushing narrow not so long ago. Seems like this is where they should have all been in the first place.

@Will, I think QBP is pushing All-City into some of Salsa’s old market. Not into dirt yet, except the cool Junk Yard Dog, but Nicer-Than-Surly bikes and quality, if unexciting, staple parts (They even have the interrupter levers Salsa used to sell. Same things, new logos).

No Titanium frame?… No thanks

If there was a bike very similar to the aluminum Warbird, offered as a complete with Sram Rival 22 (mechanical disc), with fender and rack mounts, and not a problematic PF bottom bracket, and for about $400 (complete) more than the Warbird (alum.) frame set…

would you buy it?

Looks like the ti warbird got more or less reshuffled over to the Foundry brand as their new cross bike. Probably both are Lynskey made? Foundry seems to have dropped all but 2 models in total, what is up with that?

These look nice but I wonder how they handle. Website claims 70.5deg HTA and 45m fork offset resulting in 76mm of trail (with a 35mm tire). That is very flopsy to say the least. Low vs high trail may be a manner of personal preference but that is really far from being neutral. (56ish mm)
I would think you’d be constantly correcting around corners with one of these. Not what you want to be doing on loose gravel at speeds.

“Salsa/Warbird completely outclasses anything Kona has to offer.”

Care to elaborate? I’ve got $ to spend and no time for bs generalizations…

Okay, the Warbird is really cool. And (some of) the latest changes look good. Though not loving every last thing about it.

But, why does it cost so damn much? A very similar bike (to alum version warbird), with a Rival 22 build, sells for more than 1G LESS than the 105 build Warbird!! Yes, the fork is bit heavier. And maybe(?) the frame doesn’t have the same sophistication. But it does have the rack and fender mounts.

@UnfilteredDregs
“Outclasses anything Kona has to offer”? Yeah, whatever… Keep drinking that tea buddy. Kona makes outstanding products. 105 equipped Warbird is $2499. Warbird Tiagra equipped is $1999! 105 equipped Jake the Snake $1699. Can you tell me where all the additional $$ is made up? Apples to apples Kona all the way.