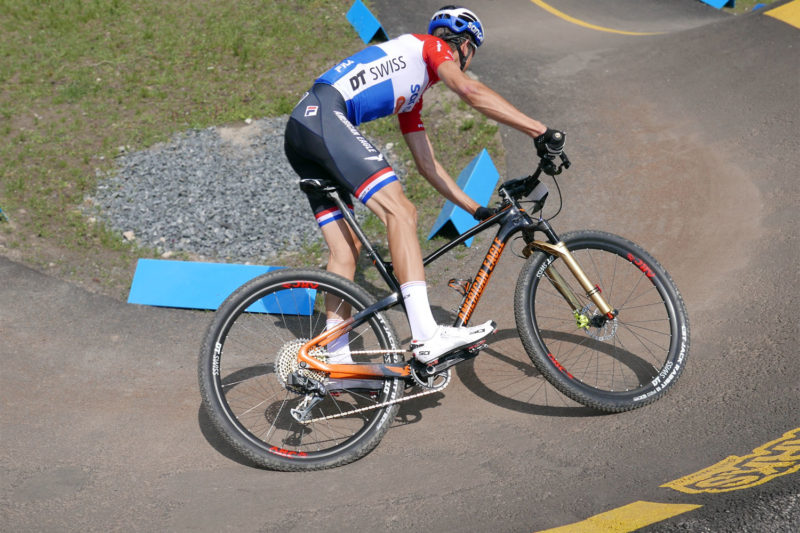 The American Eagle Flow, an XC full-suspension follow-up to their Atlanta hardtail is finally ready. Back at the start of the year we heard solid rumors that the carbon full-suspension XC bike, raced by the Bart Brentjens MTB team had been racing as early as last fall’s World Championships was “coming soon“. Originally slated for springtime availability, the team has been racing production bikes on the World Cup this season. And now consumers are set to get a taste of the new bike as well… 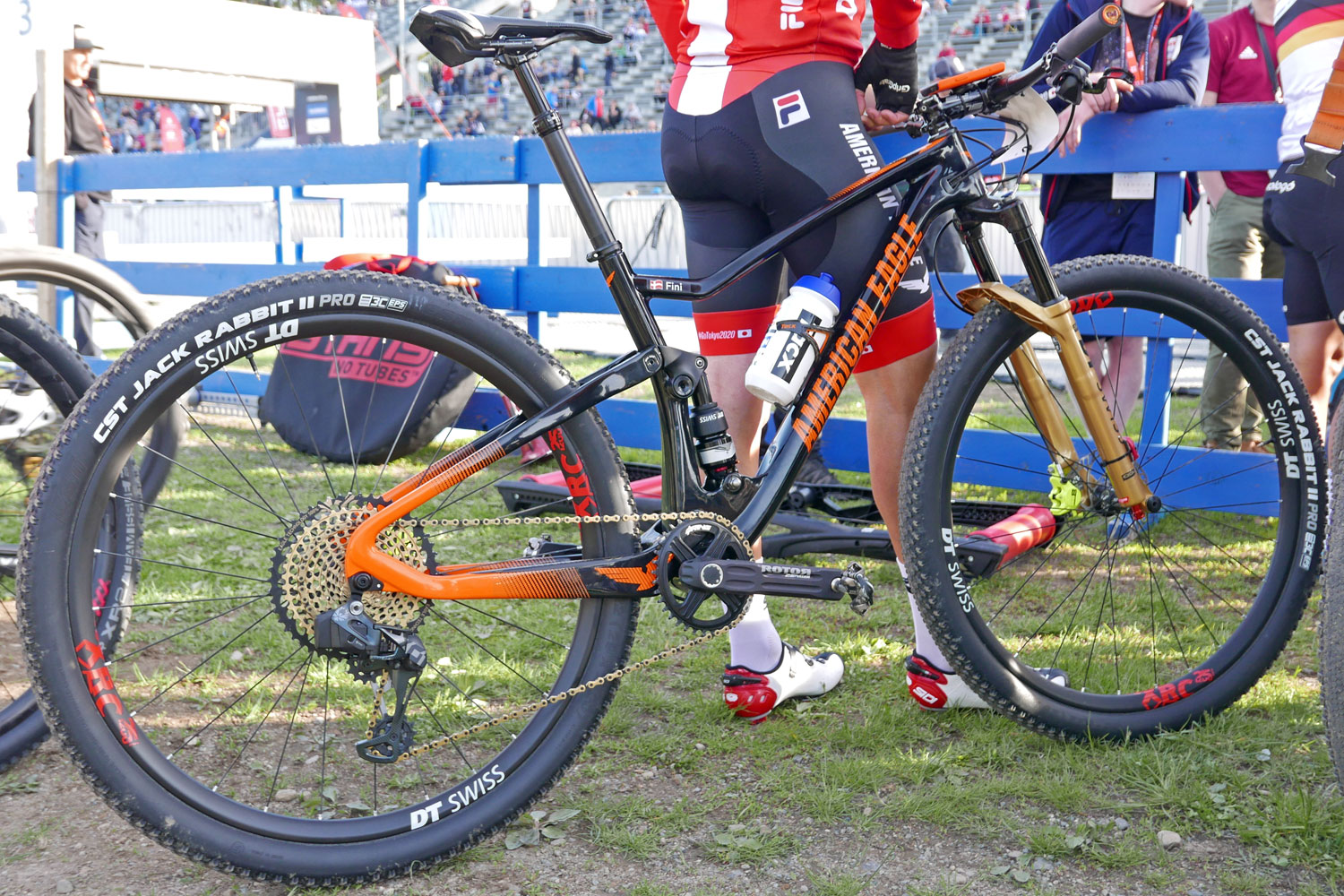 This bike was certainly no secret, having been openly raced on the world stage. But now it is finally here, and the bike gets a name – the Flow. 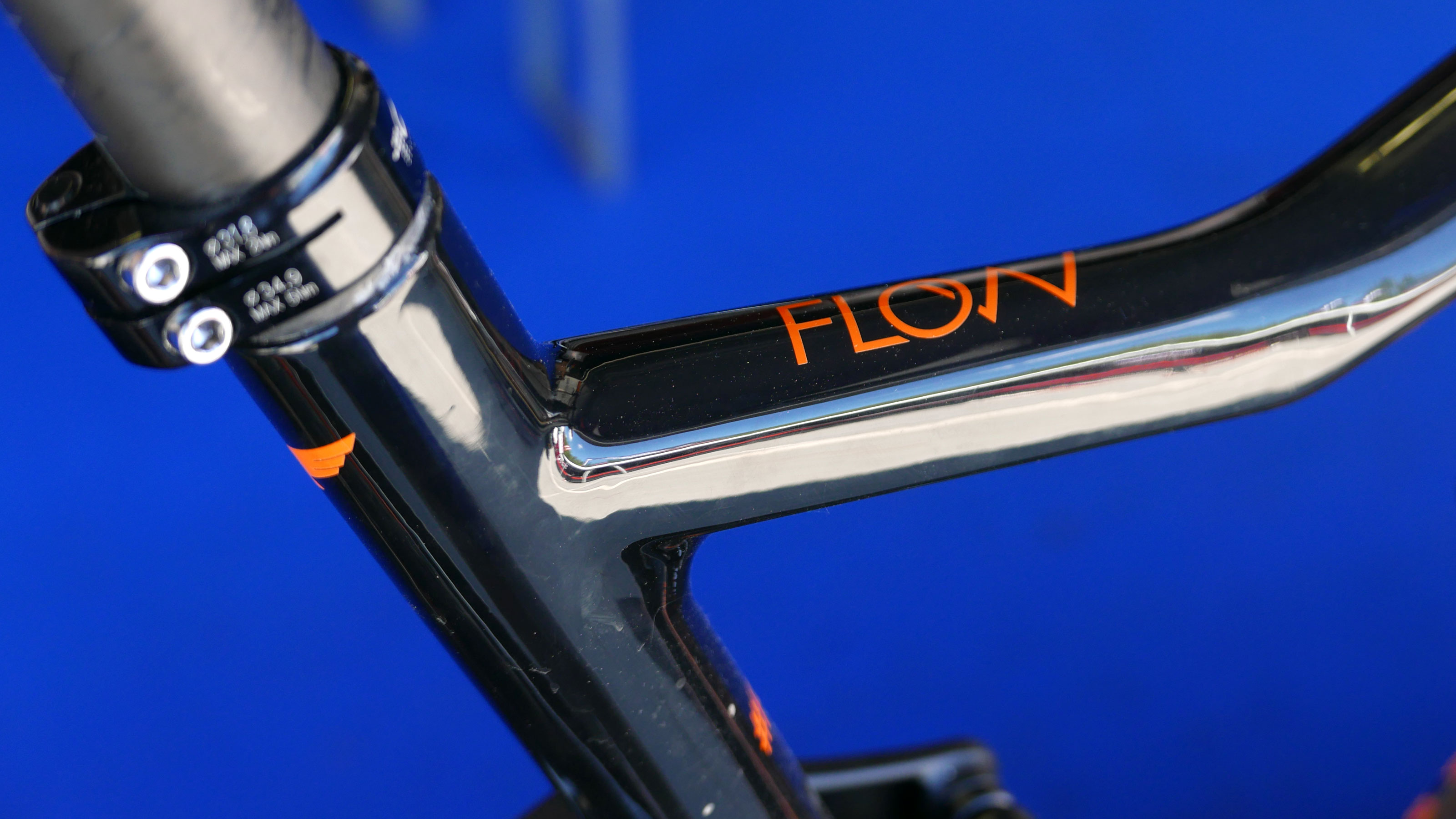 Every cross-country racer could use a little extra flow in their ride, right?

By the way, do you see that two-part seatpost clamp that actually clamps the 34.9mm seattube in the lower half, and clamps directly onto the 31.6mm seatpost itself on the upper half? That is a nice little detail for preventing seatposts from slipping without using too much force, and could be a great solution to keep a dropper post sliding smoothly! 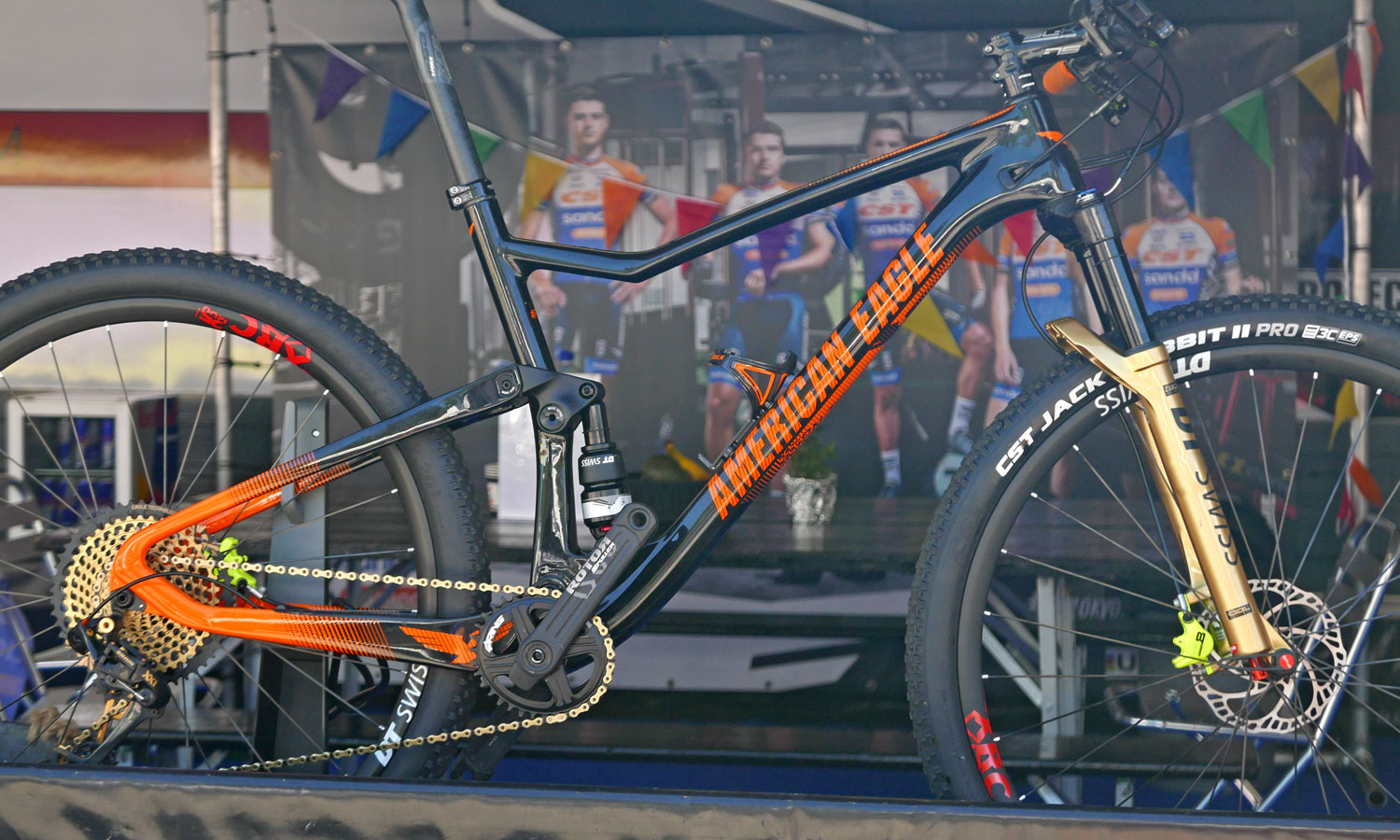 Anyone who has been following the bikes of the XC World Cup is likely to notice some strong design similarities with the Scott Spark RC (currently our most-featured pro XC bike, in large part to its winning ways and being raced by the two current elite World Champions.) 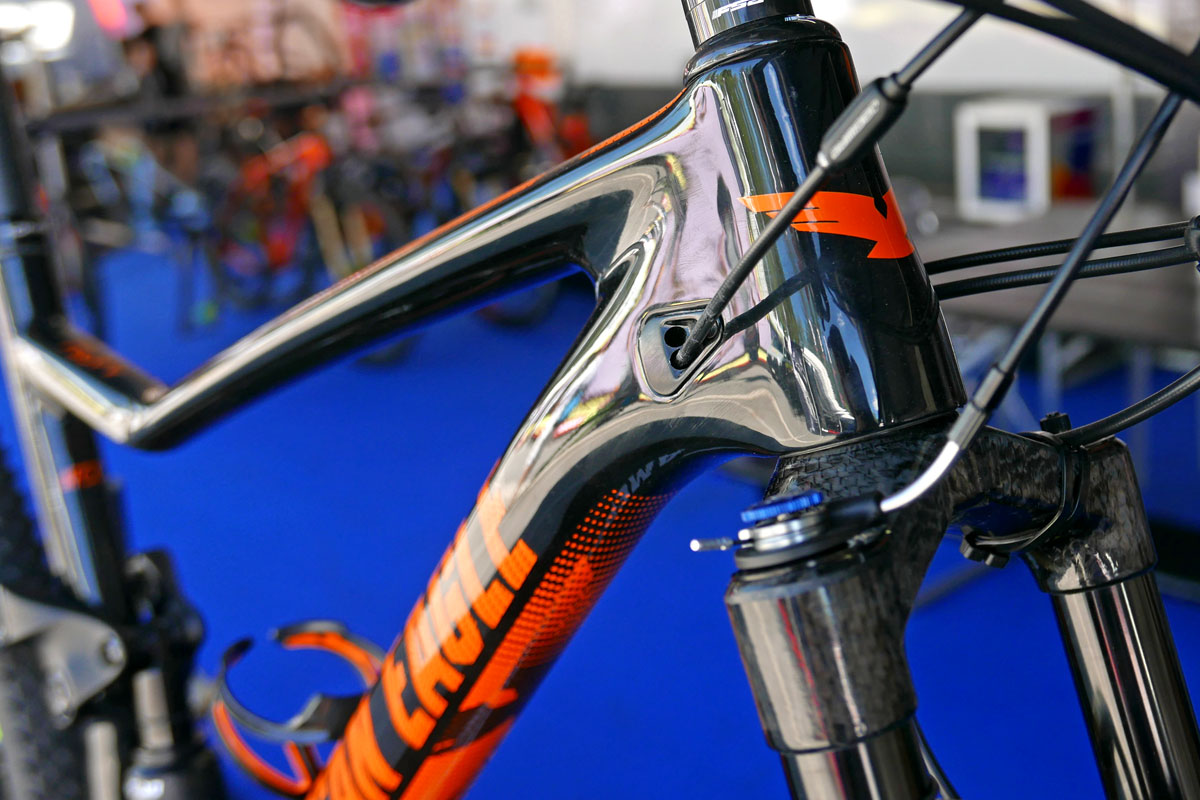 The overall front triangle profile of the new 100mm travel Flow is quite similar to the Spark, but gets a more round tube shaping, and more sculpted joints. The Flow does also feature an offset downtube to clear the fork crown, a 1.5″ tapered headtube with internal headset, and a modular cable port on both sides of the headtube to route shift & brake lines, as well as a stealth dropper post & rear shock remotes. 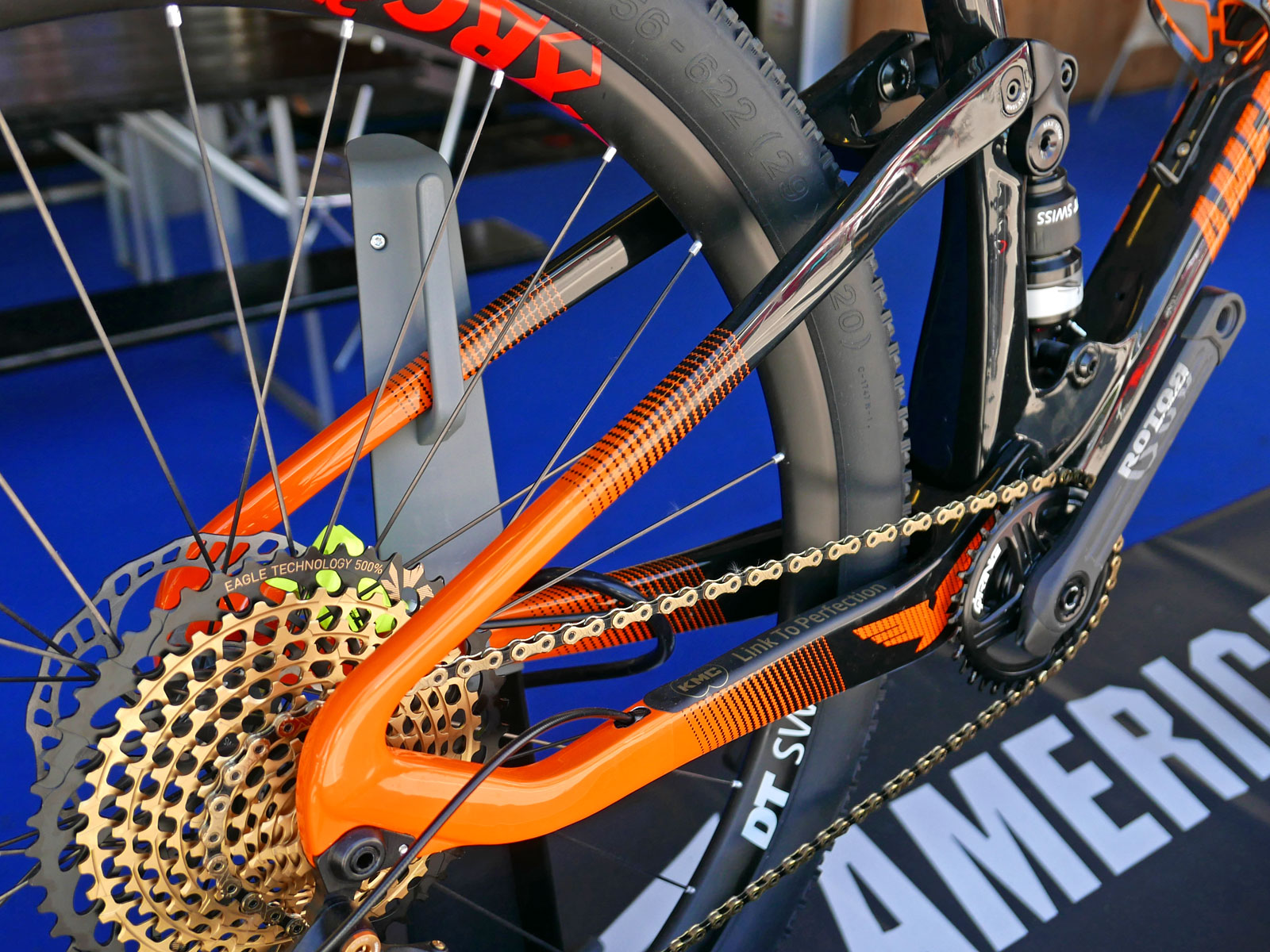 The rear end of the Flow is more distinct, with a looped chainstay to seatstay connection that hangs the Boost 148 axle on a carbon plate extension below the stays. This dropped chainstay design (on both ends) seems to allow the engineered flex in the one-piece swingarm to more mimic a true four-bar suspension design rather than what its actual single pivot layout would suggest. It also provides more room on the non-driveside to tuck the standard post mount brake caliper onto the chainstay. 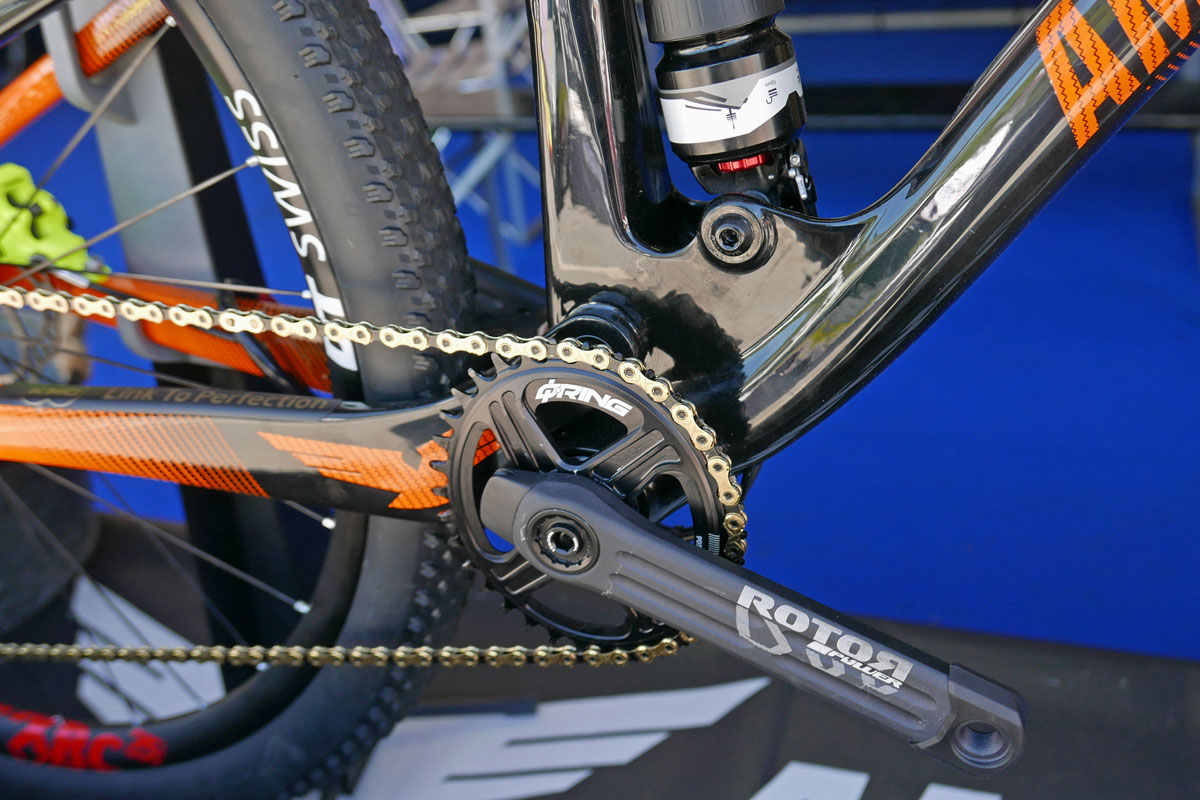 The Flow is a high single pivot design, optimized for 34-36T chainrings. The frame is configured to be 1x only, with no provision to mount a front derailleur (or a chainguide for that matter), and gets a PF92 bottom bracket. 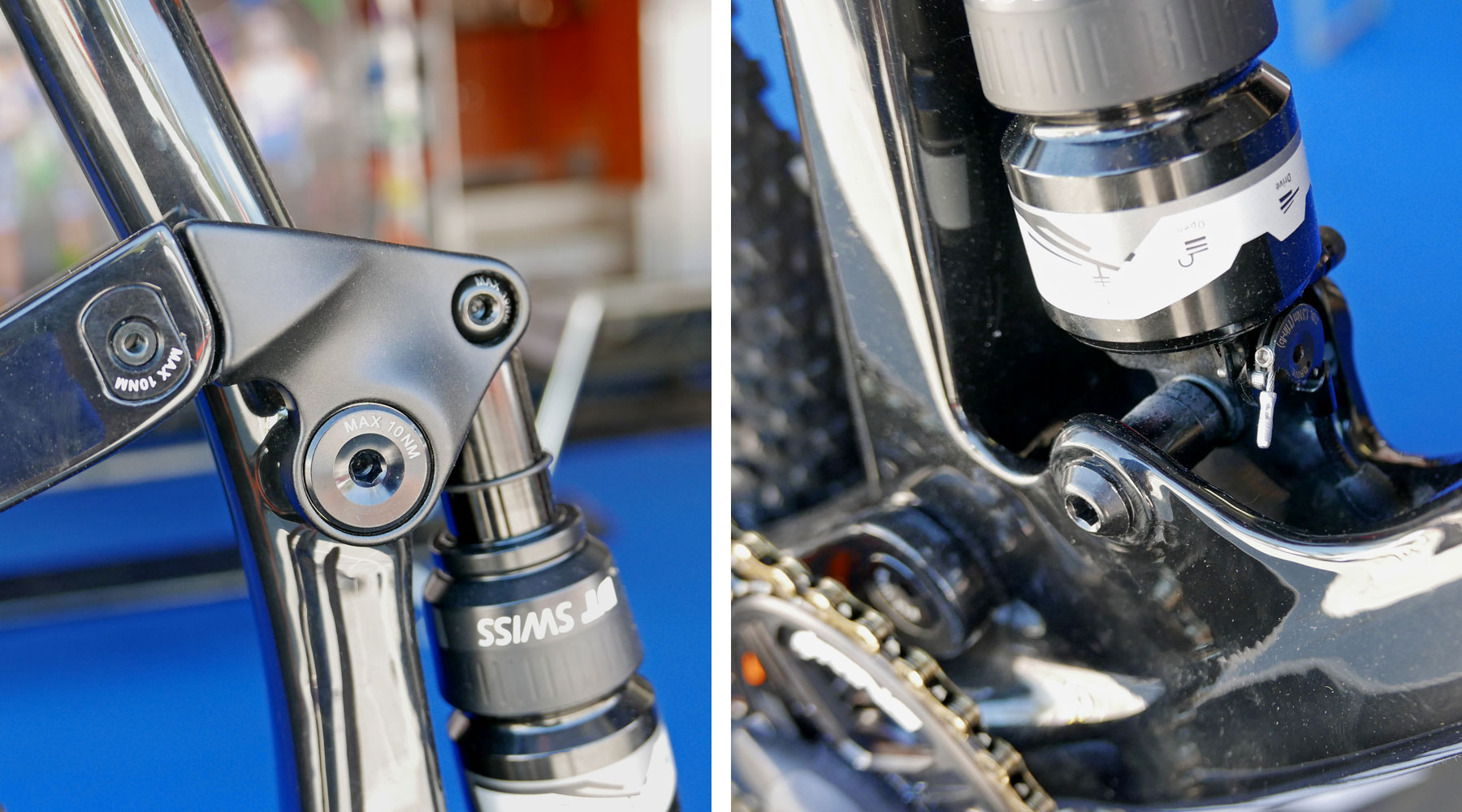 The Flow uses a short two-piece forged alloy rocker link (that looks very similar to the Spark’s carbon rocker) to drive the inverted shock, while the frame is designed to accommodate a trunnion mount at the lower shock mount. A large cable port in the pocket under the shock allows for direct cable routing into the frame for a remote lockout.

The frame also includes an extra cable port in the top of the downtube, just in front of the lower shock mount, as an alternate routing port to control a different rear shock, or to route Fox Live Valve wiring. 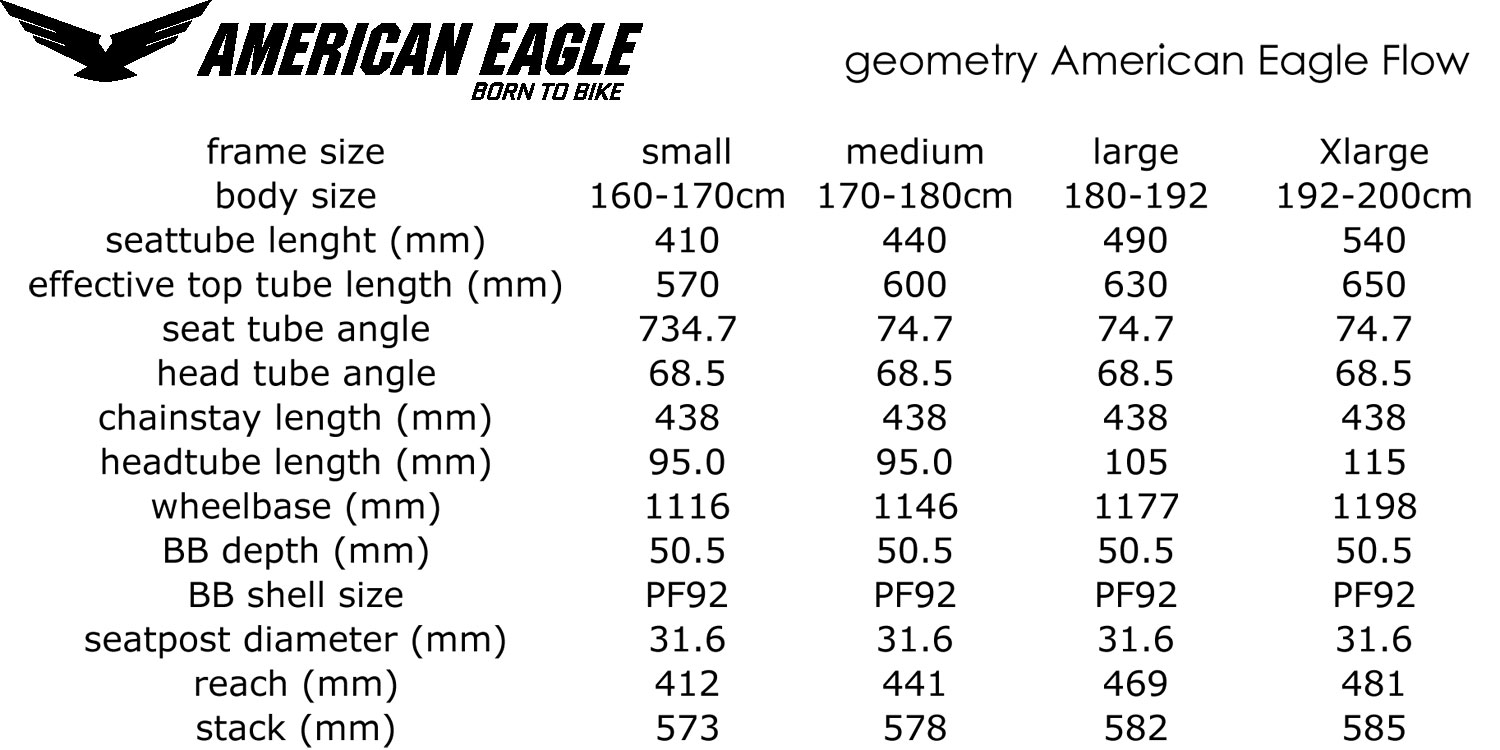 The Flow will be offered in four stock frame sizes (S, M & L, and yes an XL later). . We’ve got geo now, and it is still an XC race oriented bike with a super steep seattube, but not as steep a headtube as expected. This isn’t intended to be another ultra long, low & slack XC trail-inspired bike, but an XC race-focused rocket. That said, it does benefit from a more modern 68.5° head angle, and about 2cm longer reach than the hardtail. 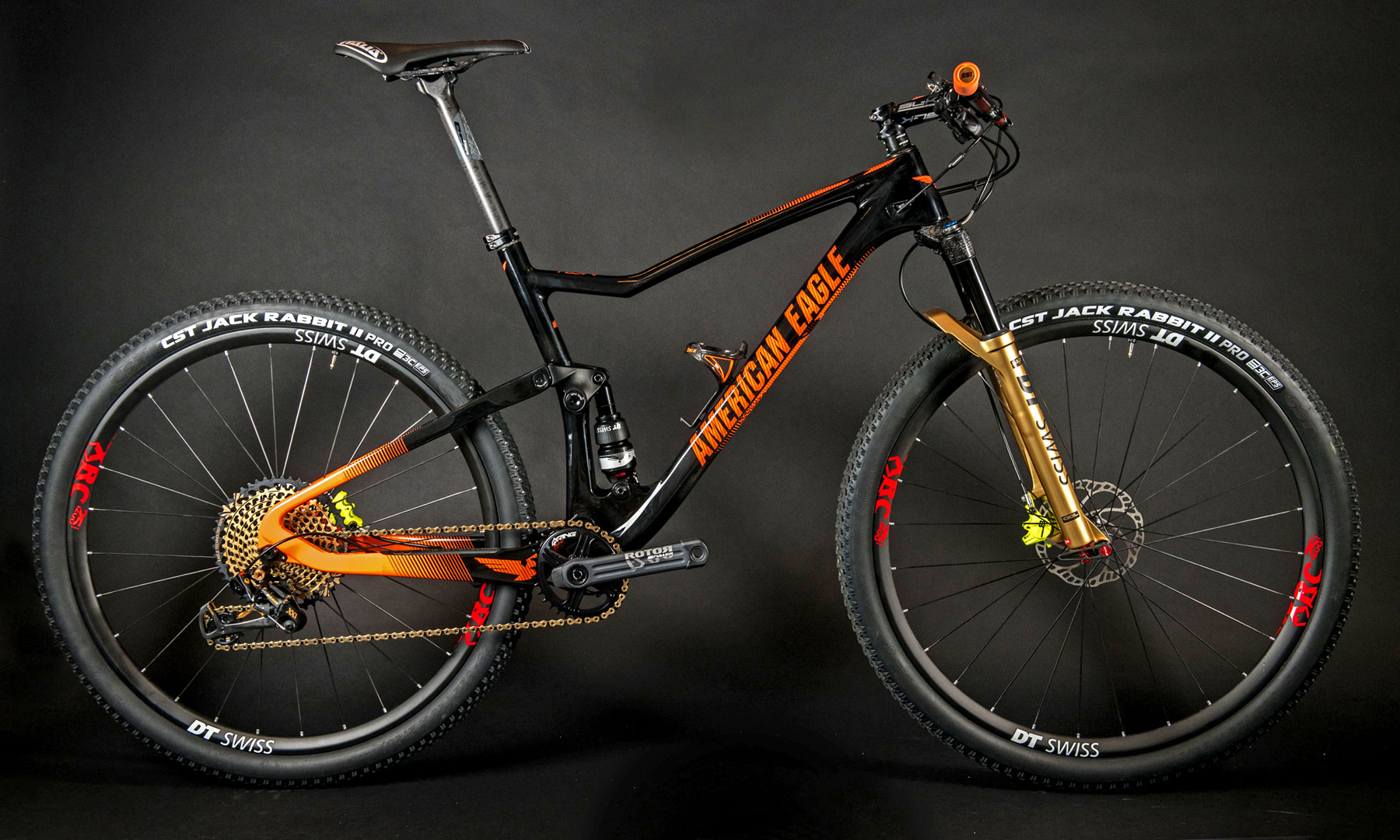 American Eagle tells us that the new Flow mountain bike will go on sale globally this week in their typical frame-only options. Including the DT Swiss shock and lockout a frameset will retail for 3200€. The carbon frame alone, without a rear shock will be available for 3000€ (making that DT shock a steal! That also makes the frame-only just 300€ more than their hardtail.)

No complete bikes are expected in the immediate future (although completes are in the pipeline), so for now it will be up to you to spec out your own XC race bike.

That brand name though. It makes me think of clothing for teenagers.

are they planning to sell a chinese open mold frame for 3.000€? you can found it on AliExpress branded as “Trifox” for 600€ … crazy!

Open mould has been covered before. Might look similar but it doesn’t mean it’s made from the same carbon. Look at the weight difference between the trifox and the American Eagle.
not saying you’re wrong. Just saying that open mould is mine field. Is just a rebrand or a completely different fibre composition and layup?

And they built it out of carbon that matches the price tag – May look the same, but won’t ride the same or weigh the same. Actual lay up of the carbon and construction methods can even be different. I’ve seen Rolls Royce body kits for VW Beatles…doesn’t make them a Rolls.

Obviously the frames are coming out of the same factory.

Carbon fiber used in the bicycle industry is 99% of the time made in one of two factories — Toray or Tenax. Each of these factories has a line of fibers, consisting of about 5 different options that would be usable for bicycles, in the case of Toray, it’s Toray 700, Toray 800, Toray 1000, Toray 1100 etc., Toray 700 is the cheapest and most AliExpress carbon frames use Toray 700. The only advantage to the “higher modulus” carbon fibers (800, 1000, and 1100) is that they are marginally lighter. They are NOT much stronger. The layup does need to change with some of these higher fibers, but again, the engineer that designs the mold, designs the layup. The other variable is the resin, and resins also are quite standardized, with most of these factories having a preferred choice for every fiber. If American Eagle is using this mold, they did NOT design the layup themselves or use a custom epoxy, they would have subcontracted this mold designer to design the layup as well, meaning similar quality to the open mold product. Brands that really made a difference over these products have in-house engineers that loop through multiple iterations of molds, experiment with different layups in-house, and perform extensive testing at the forefront of the industry. That does not happen in these open-mold factories which focus on meeting current quality standards and keeping costs down.

If American Eagle really is using this open mold frame, they probably aren’t paying more than $400 per frame before warranty, or $500 per frame if they adopt factory warranty service. Painting costs $20-$40 per frame, and minor upgrades that they would have made to hardware are about $20-$30 per frame after tooling ($1000 up front?).

I am frustrated why brands cannot be up-front about this. There is nothing wrong about using an open mold frame, the quality is great, and there is nothing to be ashamed about providing world-class global support and a dealership network that’s better than the factory could ever hope for. But to be sneaky about this isn’t going to help, and more than ever consumers are noticing.

I don’t know where you have your „facts“ from, but they are only like 50% correct. T700 is already a respectable quality of carbon fiber. Toray goes down to T300, and there are other cheaper suppliers for fibers (and prepreg), such as Formosa. In fact many of the lower grade „carbon“ frames of big brands are using a lot of glass fiber.
Also, I would love to find a factory that can offer a 20 USD paint job.
American Eagle‘s decision to use that frame doesn’t seems like a smart decision though. So easy to predict that would get them into the situation we are seeing here.

Claimed weights are identical between the Ali and Eagle versions. This also means they are very likely made from the same materials.

Just for clarity, if you scroll down in the Aliexpress page to the pic/specs you will see the lighter claimed weight of the frame which matches the American Eagle claim. I do not know what accounts for the two different frame weights listed.

Perfect match, even down to the seatstay chip with the torque printed on it! That’s super shady!

“This dropped chainstay design (on both ends) seems to allow the engineered flex in the one-piece swingarm to more mimic a true four-bar suspension design rather than what its actual single pivot layout would suggest.”

Is this something they said, or an assumption?

Dunno about shady, there is nothing illegal selling Alibaba crap with insane markups. eBay and Amazon are FULL of this kinda thing in every product category. It is shitty though, and regardless of what anyone says about open mold differentiation with say something like an american eagle, it’s still an open mold. I would rather get one factory direct. If the factory is only half as good as Light Bicycle at taking care of customers direct, at 600 euros its a win win.