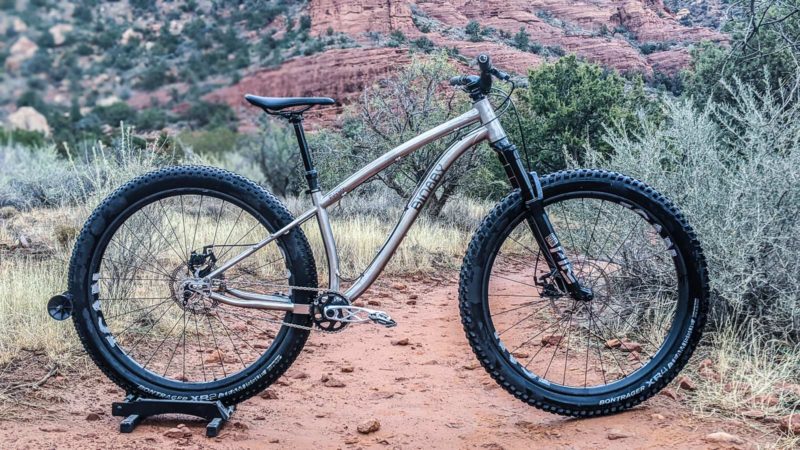 Binary Bicycles have teamed up with Steve at Hardtail Party to collaborate on an all-new Titanium Hardtail; the Binary Maniak. Hardtail Party is a merchandise brand and successful YouTube Channel dedicated to, you guessed it, hardtail lovin’. The Maniak is principally designed by Steve, encompassing all the best bits about the hardtails he has tested over the years, but executed by the titanium specialists at Binary Bicycles. Designed around a 120mm fork and 29″ x 3.0″ tire clearance, the Maniak is long, low, slack and steep where it counts. Let’s take a closer look at what you’re getting for $2099 USD of your hard earned cash. 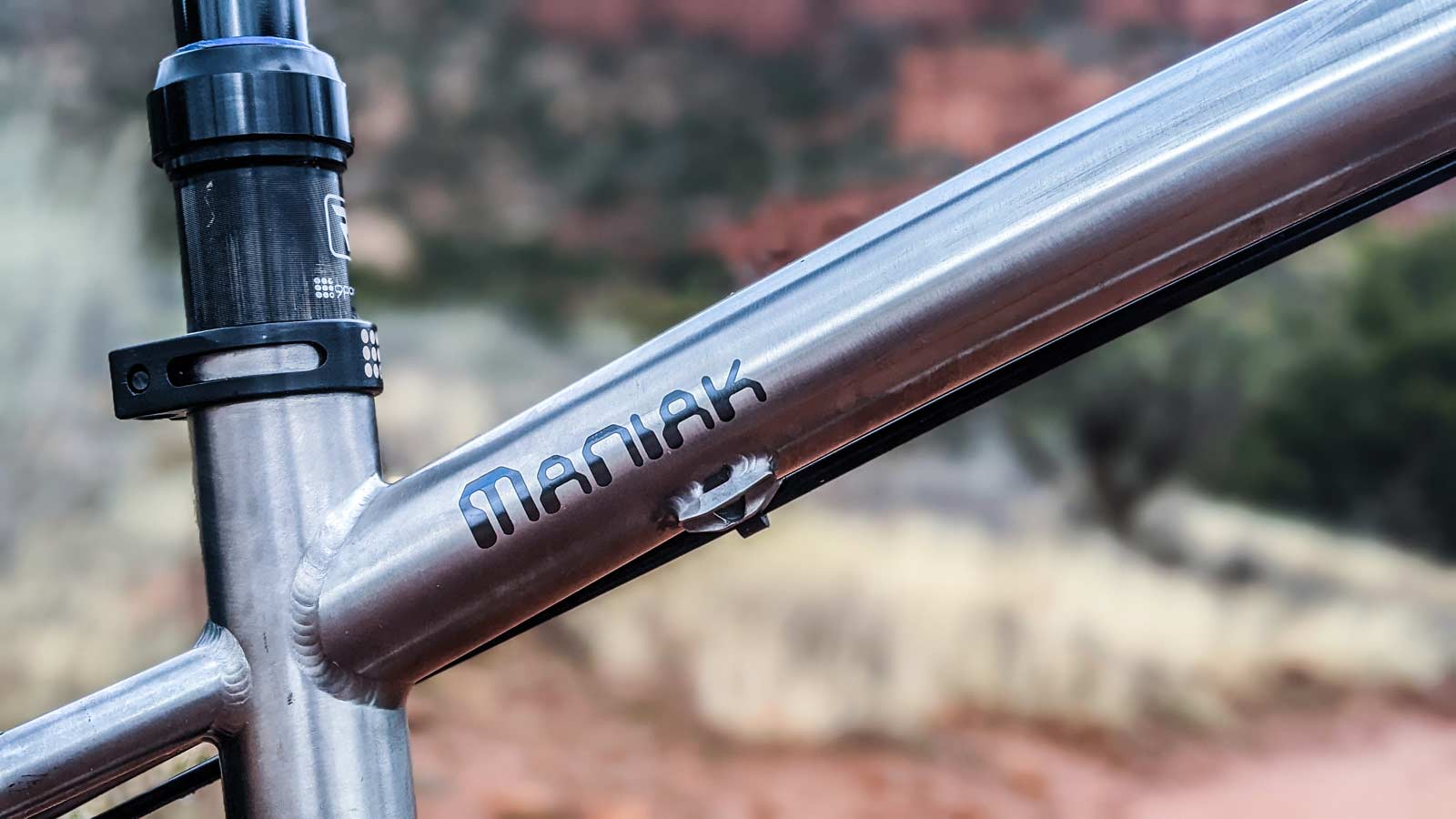 Steve at Hardtail Party had wanted to design his very own hardtail for a few years, but struggled to find the right brand willing to hand him the reigns. That changed following some test rides of the Binary Bicycles offering. Steve liked their bikes for sure, but was honest enough to admit they didn’t really suit the terrain he rides most often, nor did they suit his riding style. That was when Binary Bicycles stepped up and offered to build “The Dream Hardtail according to Steve at Hardtail Party”. Fast forward a few years and that hardtail is the Binary Maniak, and it’s available to pre-order now. 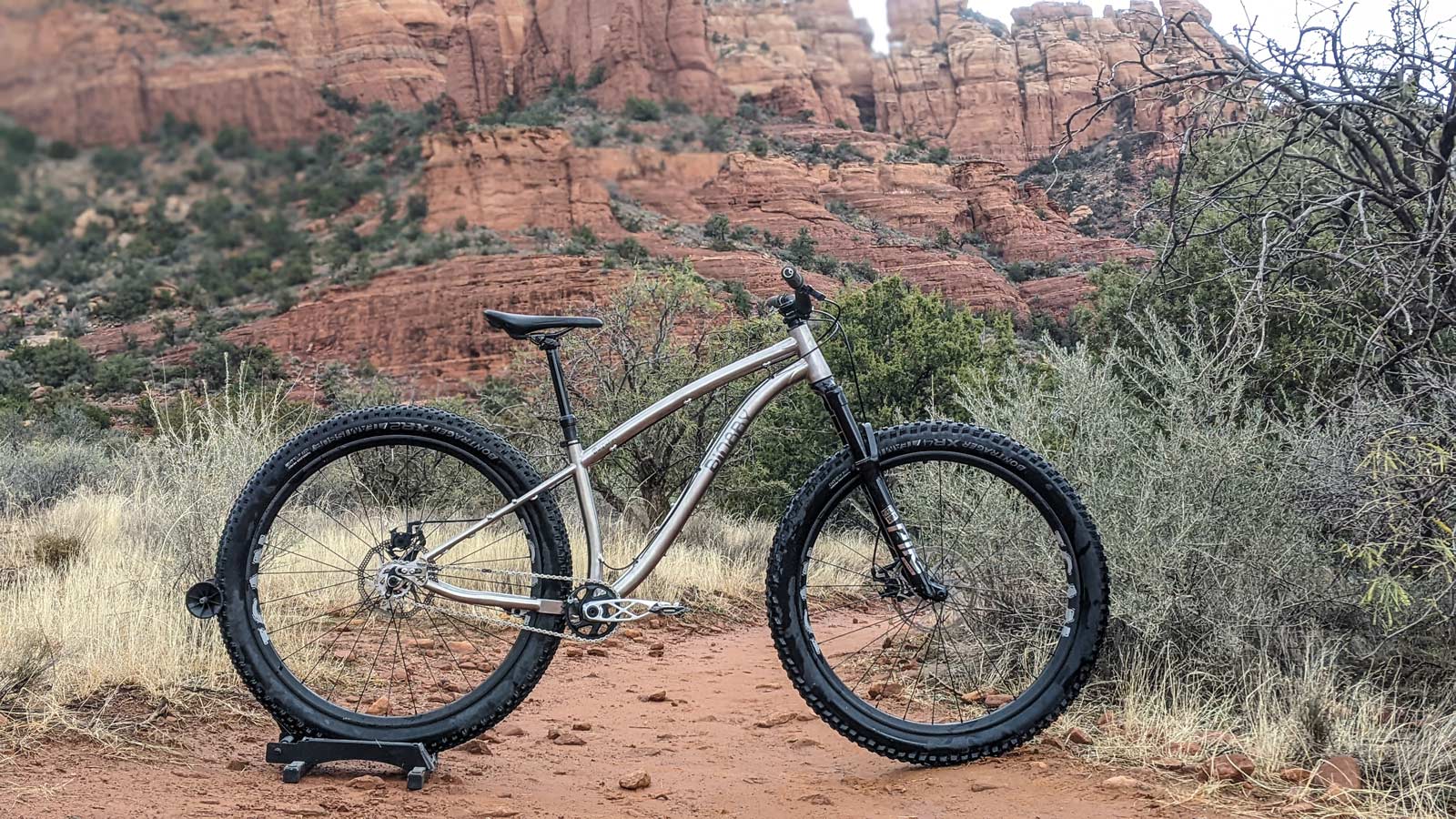 The Binary Maniak runs Paragon style sliding dropouts, meaning the bike can be setup as a single-speed rig (as shown) or geared. Stoked on those sick-looking machined cranks? Check out our story on 5DEV here to learn more.

The Maniak is a modern, aggressive short-travel hardtail, handcrafted using seamless 3Al-2.5V (ASTM Grade 9) titanium alloy tubing. “I’ve always wanted a modern hardtail that I could take on any trail and have fun. So, that’s what Binary Bicycles has built for me. The Maniak is designed around my belief that aggressive hardtails perform best with a 120mm fork. However, it will accommodate up to a 150mm fork for those who wish to experiment” – Steve at Hardtail Party.

The Maniak gets a hand-brushed finish with sandblasted decals; runs external cable routing

So, who exactly is the Maniak designed for? Binary say:

On that last point, it’s important to mention that the Maniak frame boasts 2 bosses on the seatpost, 3 bosses on the top of the downtube, as well as a further 3 bosses on the bottom of the downtube. Also note the rack mounts on seatstays. Storage space is plentiful for the bikepacker in you. You can also switch out the cassette and rear mech for a single-speed setup, and the stack height is pretty tall making for an upright riding position that should be fairly comfortable on a long journey. 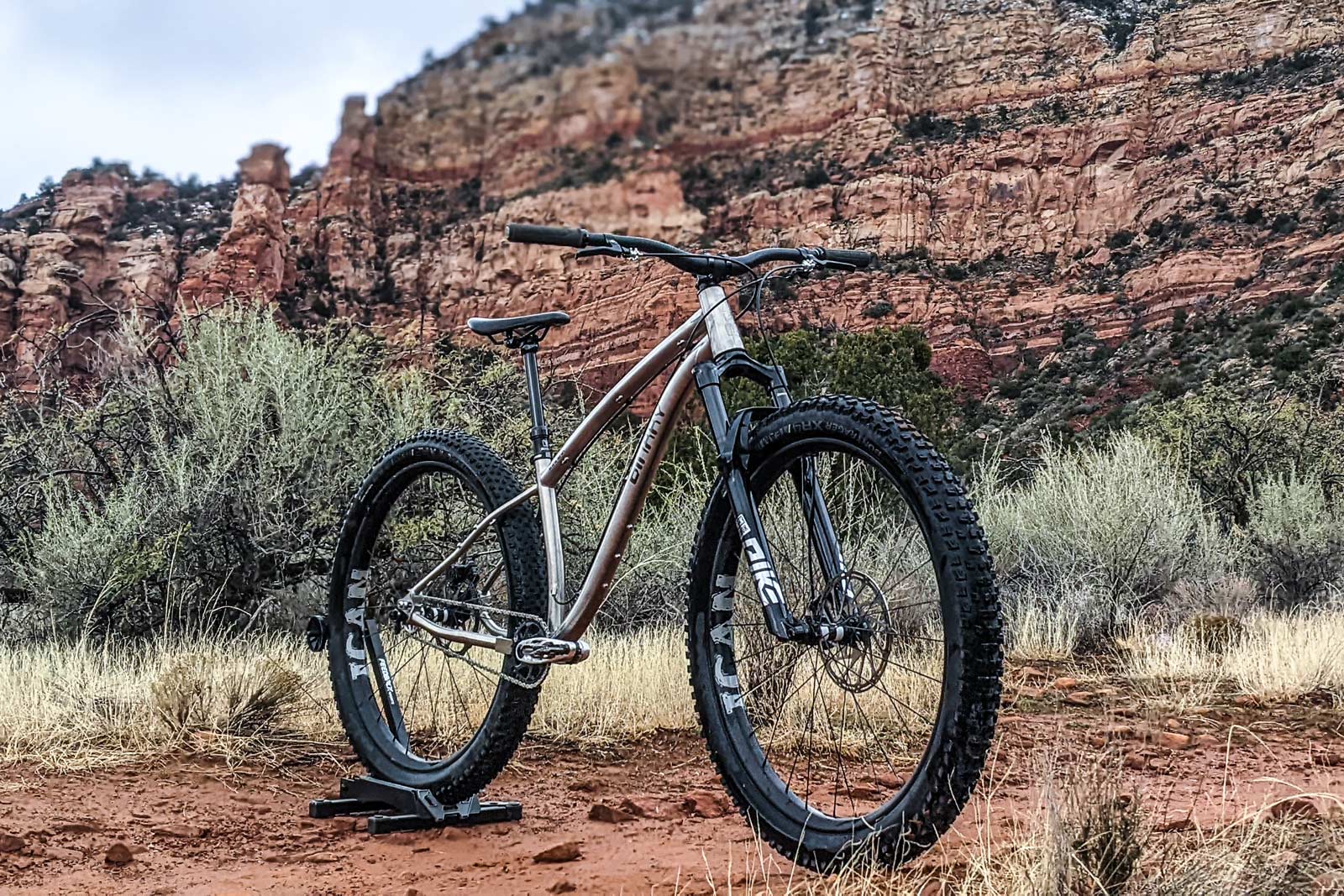 The Binary Maniak is fabricated in China, though the brand have started building some prototype steel frames out of their HQ in Arizona

The frame runs boost rear axle spacing, with wide stays able to accommodate 3.0″ wide tires; careful contouring of the chainstays prevents heel rub. Whether you choose to run a 27.5″ rear wheel for a mullet setup, or a 29″ rear wheel, a 3.0″ tire is the maximum. That said, there’s nothing stopping you running some super racy XC tires for faster rides when rolling resistance is more important than grip or outright comfort.

Onto the actual numbers… built up with that recommended 120mm fork (531mm A2C) and a 29″ wheelset, the Binary Maniak runs a 65° head tube angle paired with a 77/76° seat tube angle, frame size-dependent. Across the S-XXL frame size range, chainstay length varies, increasing in line with the growing reach numbers. This proportional approach to frame design is to be expected really, especially when you consider that this frame will leave you $2099 USD out of pocket. Said stays are pretty short, too, starting at 415mm on the S and M frames, increasing to a maximum of 440mm on the XXL.

On the other hand reach figures are pretty generous, as you might expect from an “aggressive geometry” hardtail; 435mm in Small, increasing to 480mm in Large, and maxing out at 520mm on the XXL. The BB drop comes in at 65mm on S-M/L, but is slightly higher on the larger frame sizes at a drop of 60mm. Short seat tubes (420mm in large) will allow riders to take advantage of the ultra long travel dropper seatposts now on the market. 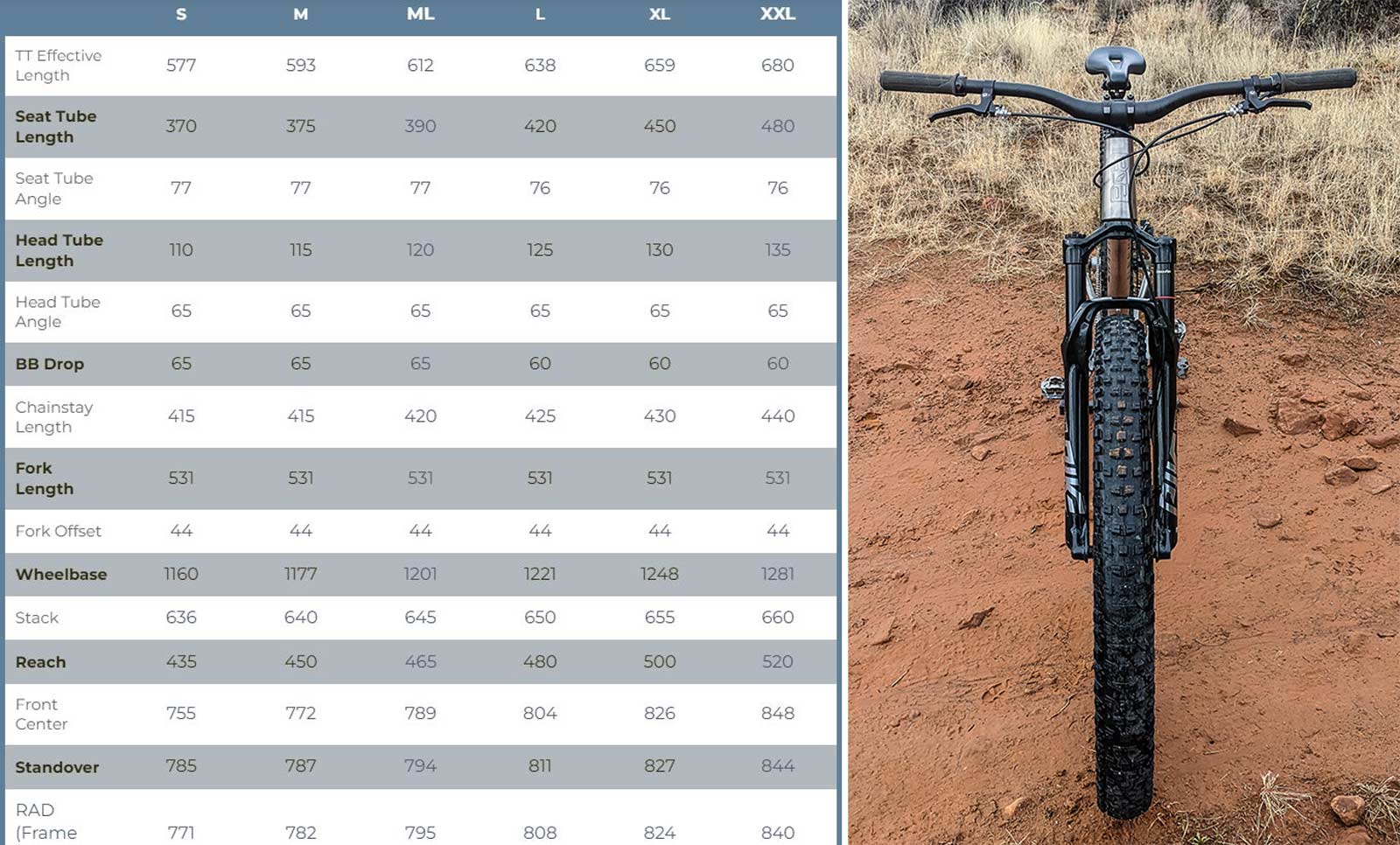 The Binary Maniak titanium hardtail frame will set you back $2099 USD. Binary Bicycles are now accepting pre-orders for the first batch; open till Feb 11, 2022. A $600 USD deposit will secure you one.

Such a fantastic writeup, you guys really do your homework! It’s an honor to have you mention this bike, it’s been a blast learning about all that goes into taking a bike from concept to production to the public.

Looks amazing! This ticks all of the boxes that interest me: threaded bb, external cable routing, huge standover, short-ish chainstays, slack up front, ability to bikepack.
I do wonder how much of titanium’s smooth ride quality can be left over when there is such a long yoke and such a short section of flexible tubing. I also wonder about the seat angle, I know 76 or so is where we seem to be right now, but when I’ve ridden those bikes I came away with my knees hurting.

Seat angle is 77°. Glad to hear I’m not the only one who finds this trend of super steep seat angles obnoxious. I need about a 73° STA with a straight seat post to get my knees in the right position behind my BB (3.1cm back).

Hi Frank, the size small through medium-large has a 77-degree seat tube angle; the size large through xx-large has a 76-degree angle.

With a steep STA you can size down and run a setback post/ dropper. With a slack post if your tall your out of luck… Modern geo allows for options.

Hi Tim, feel free to fill out the Cyclist Fit Form downloadable from our website and send it to us. We can take a look at how your knees would line up on the most appropriate size for you.

Thanks for the tip!

Finally, something that can replace my Stache if/when the day comes! Excited to see how this beautiful machine does