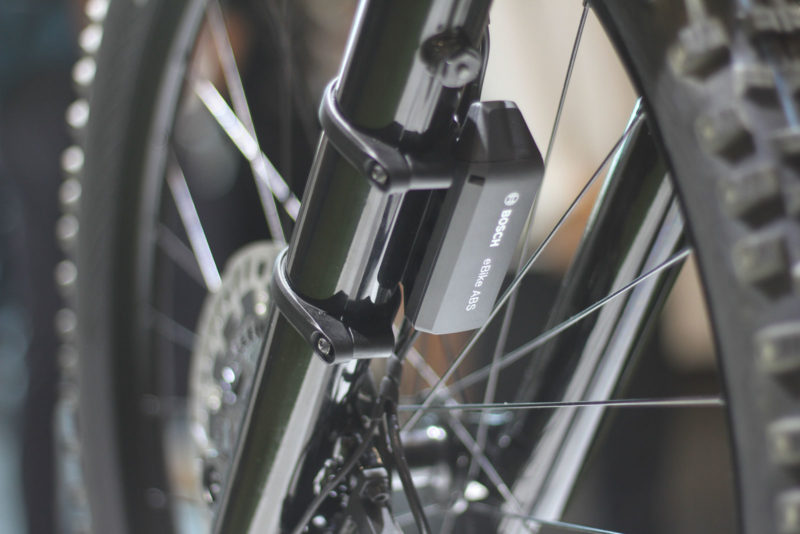 Bosch has announced an updated version of its Anti-Lock Braking System. It is hugely refined, now a neatly packaged unit that can mount inboard of a fork’s lower leg, out of sight and out of mind… until you need to emergency stop, that is. The new Bosch eBike ABS System, set to launch initially with Magura brakes only, will be coming to North American markets on 2023 eMTBs and eCargo Bikes, along with a host of Smart System updates including a new eBike alarm for enhanced theft deterrence. Here’s an overview of what’s coming. 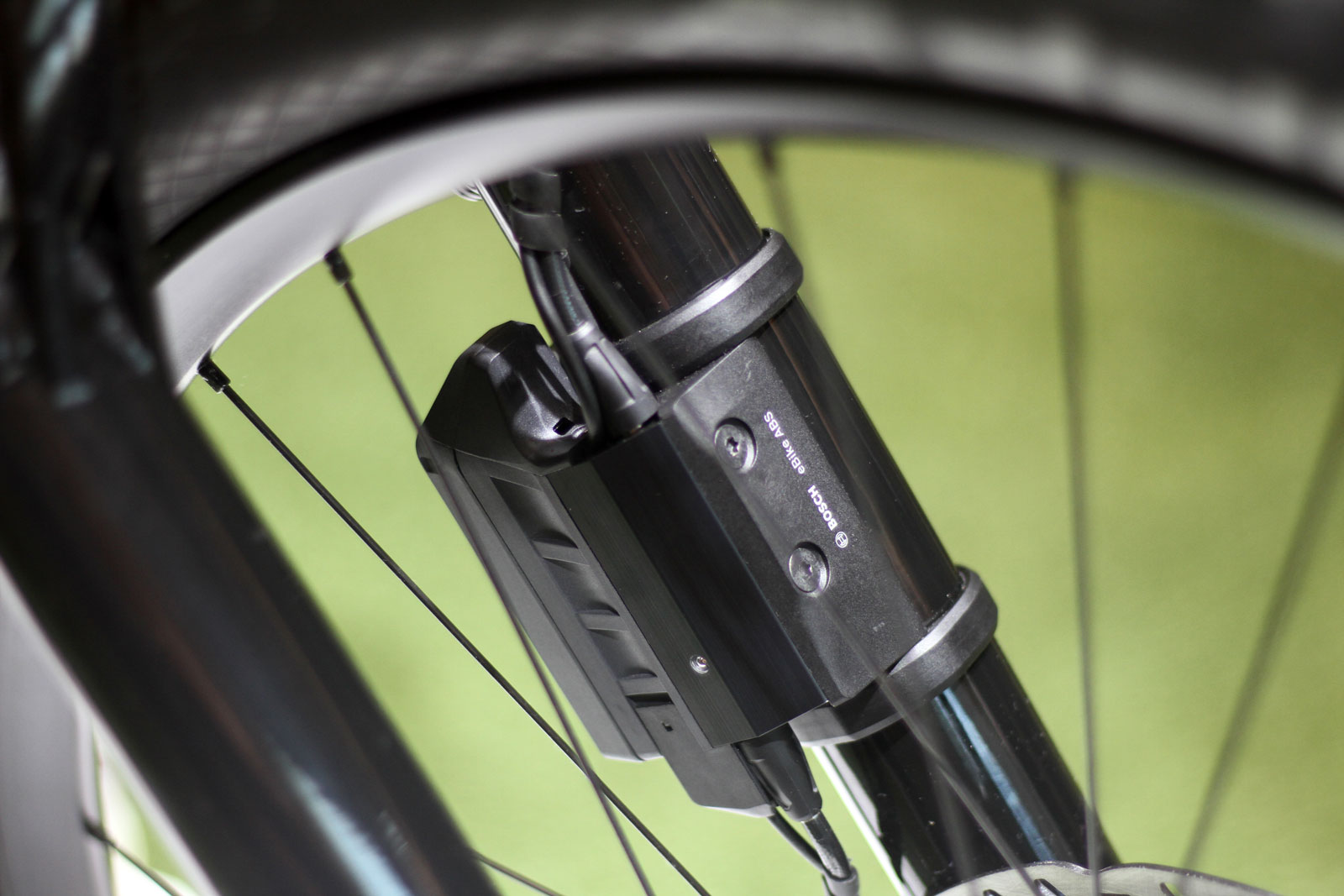 The Bosch eBike ABS System will be seen on 2022 models from this Summer, with the exception of North American markets where the system will not be implemented until Fall of 2023

For those partial to the occasional endo, fear not. Not all Bosch System-endowed eMTBs will receive the eBike ABS System in 2023. Of course, it is up to the OEM partner as to whether they spec it on their eBikes or not. I can’t name any names as I don’t know for sure, but I imagine the ABS will be reserved for your eSUV-style eBike; those that bridge the gap between off-road riding and grocery shopping, for example.

When Fox’s eSUV fork, the AWL, was announced last Fall, Fox said its non-drive side lower leg mounts were added specifically for “a soon to be available next-level safety feature”. The Bosch ABS System is that next-level safety feature. While they can of course be ridden by anyone, these kinds of eMTBs seem to be marketed at less experienced mountain bikers who may be at an increased risk of grabbing too much front brake on a descent, or when required to perform an emergency stop. 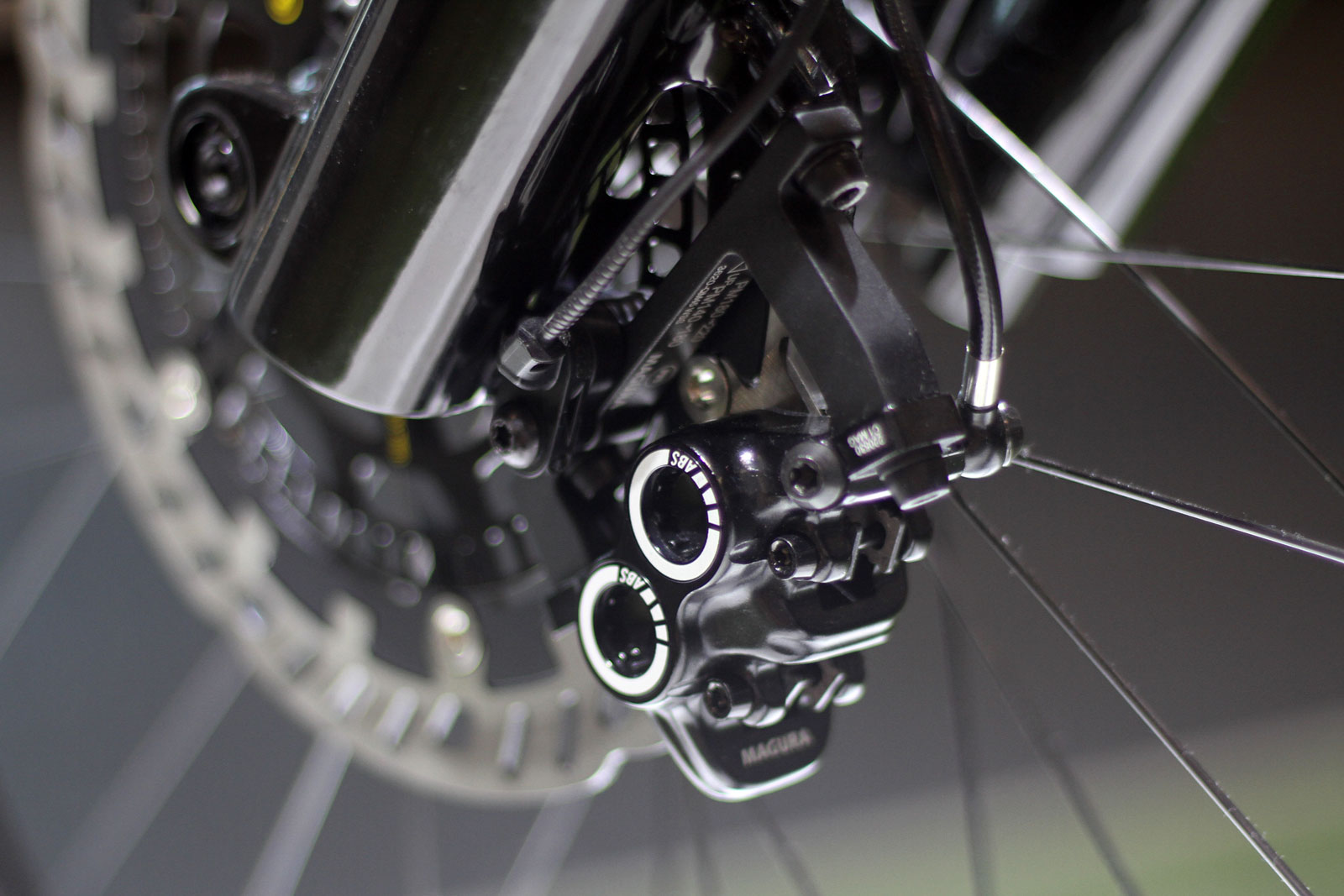 Bosch tell us the ABS System does not require a specific brake caliper, only that, for the moment, the system only works with Magura brakes

It is in those scenarios that the ABS kicks in, preventing the front brake caliper from locking the pads onto the rotor, thus stopping the front wheel from locking up entirely, and throwing the rider over the handlebar. The Bosch Accident Research Group claims it has data to show up to 29 percent of all accidents involving eBikes could be reduced, or completely prevented if all eBikes had reliable ABS. Quite the statistic.

We can also see potential for the ABS System on eBike hire fleets at trail centers, for example. Again, on bikes that tend to be used by the less experienced mountain biker, perhaps those who aren’t yet familiar with the instant braking power provided by a 4-piston hydraulic disc brake that’s clamping a 200mm rotor.

How does Bosch eBike ABS work?

Well, Bosch have a couple of different variations of ABS, depending on the application. However, they all work on the same principles. 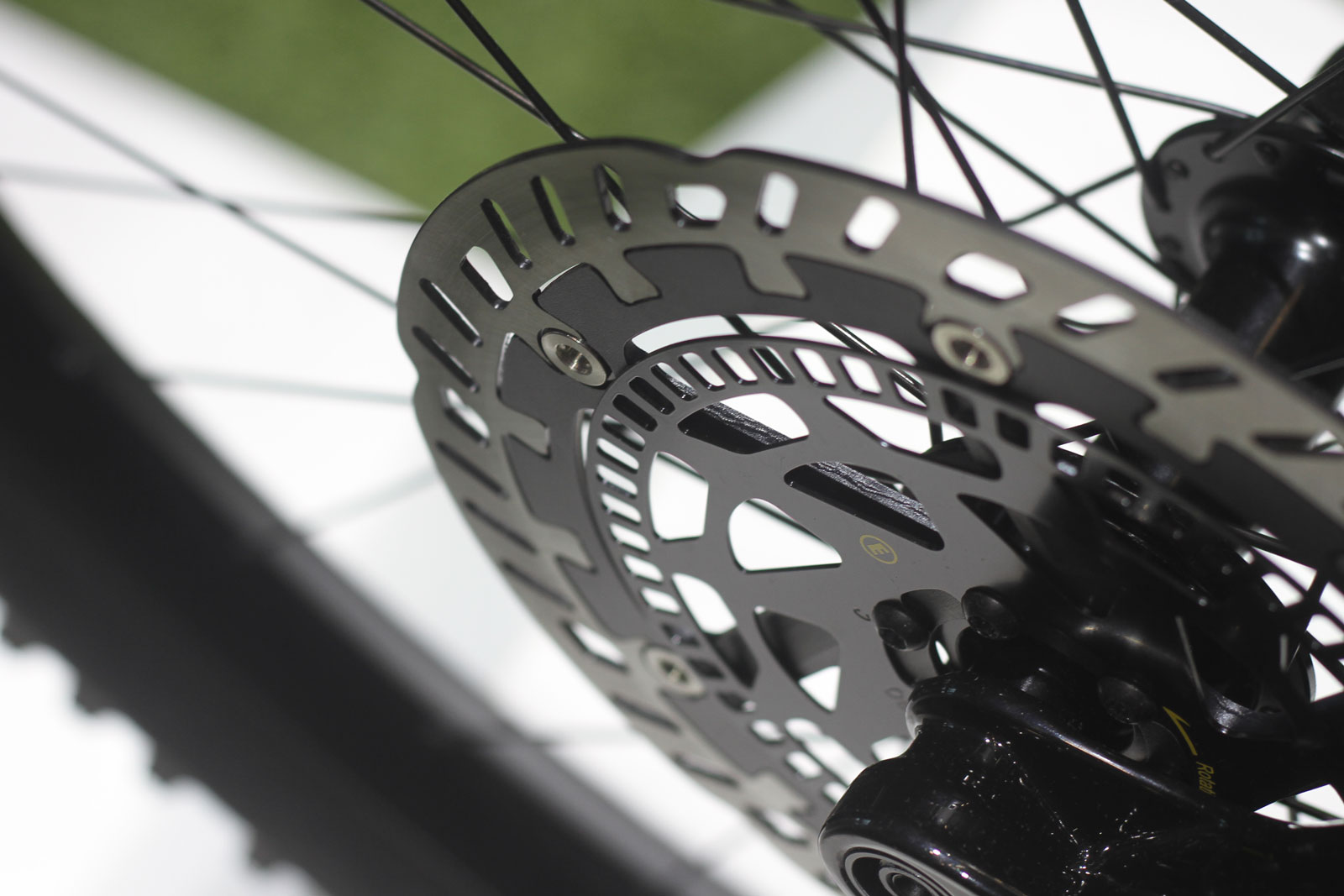 The speed sensor  bolts directly to the otherwise conventional rotor, sitting concentric to and outboard of the rotor’s braking surface. The number of fins it has indicates the resolution of the system – i.e. the number of times the rotor’s speed is read per revolution.

The front and rear brake rotors are each equipped with a speed sensor. These are constantly providing data on wheel speed to the main control unit. When the front wheel speed slows significantly in comparison to the rear wheel, and a threshold ratio between those two speeds is reached, the ABS is activated. There are other sensors that provide input for ABS activation too. If the rear wheel lifts off the ground, for example, the ABS kicks in to prevent further lifting an thus, rider ejection. 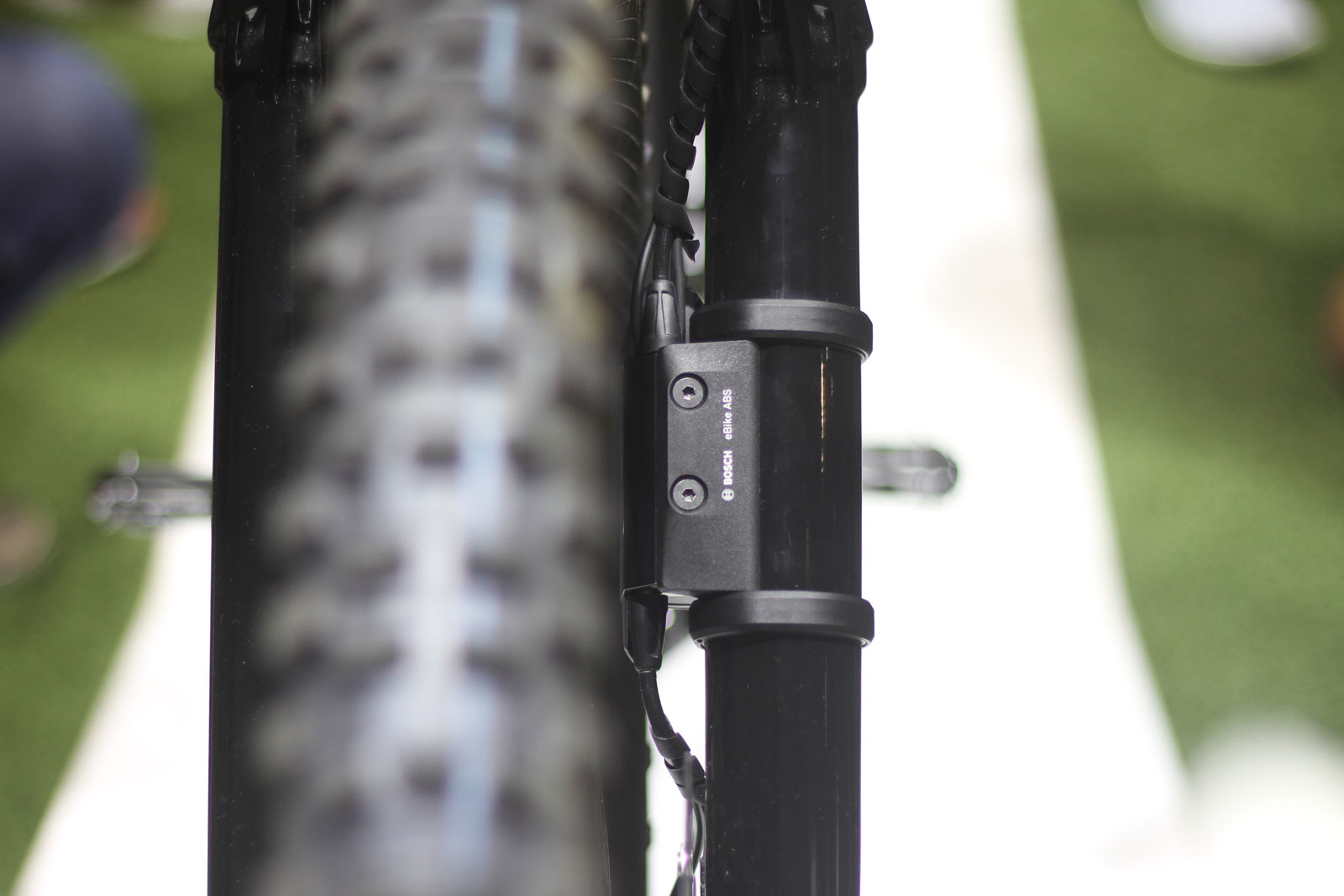 The small ABS unit bolted to the fork lower executes the ABS function. Connected directly to the lever’s master cylinder and the 4-piston caliper, the unit forms part of the front brake’s hydraulic line, itself filled with hydraulic brake fluid that is partitioned into two distinct chambers. I’m not privy to the mechanics of it, but it I am told it works very similarly to the ABS systems now seen ubiquitously on motorcycles; the very systems Bosch themselves have been manufacturing since 1995. So, this technology is far from new to them. 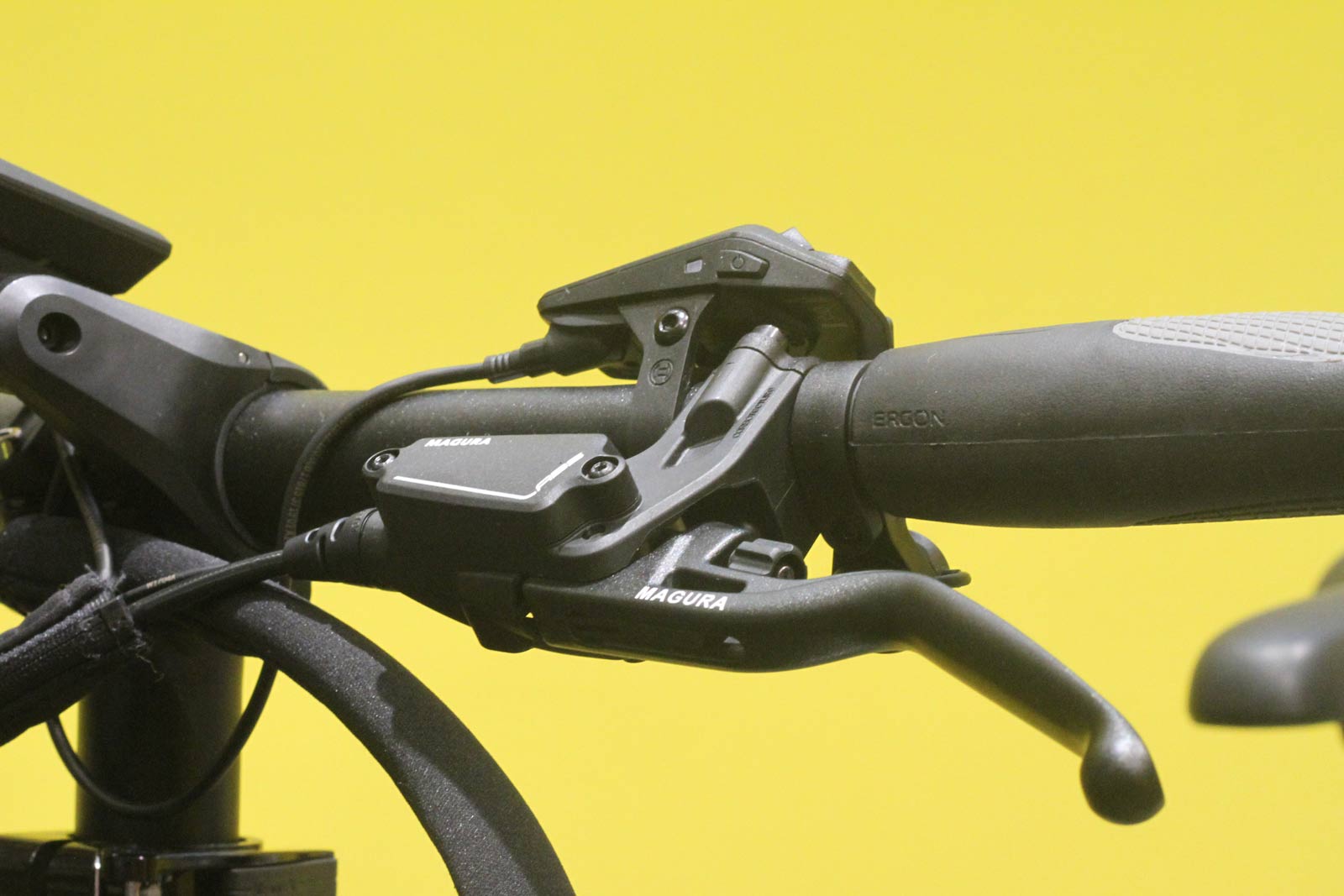 I haven’t had a shot myself, but while running from brand to brand at Eurobike last week, I did see a number of people testing out the Bosch ABS system on eCargo bikes. When they grab a load of front brake, it’s very easy to see the ABS system in action. It has the effect of causing the fork to flex in the fore-aft plane, back and forth, as the caliper continuously clamps and releases the front brake rotor rapidly to prevent a front wheel skid. From what we saw, it works! 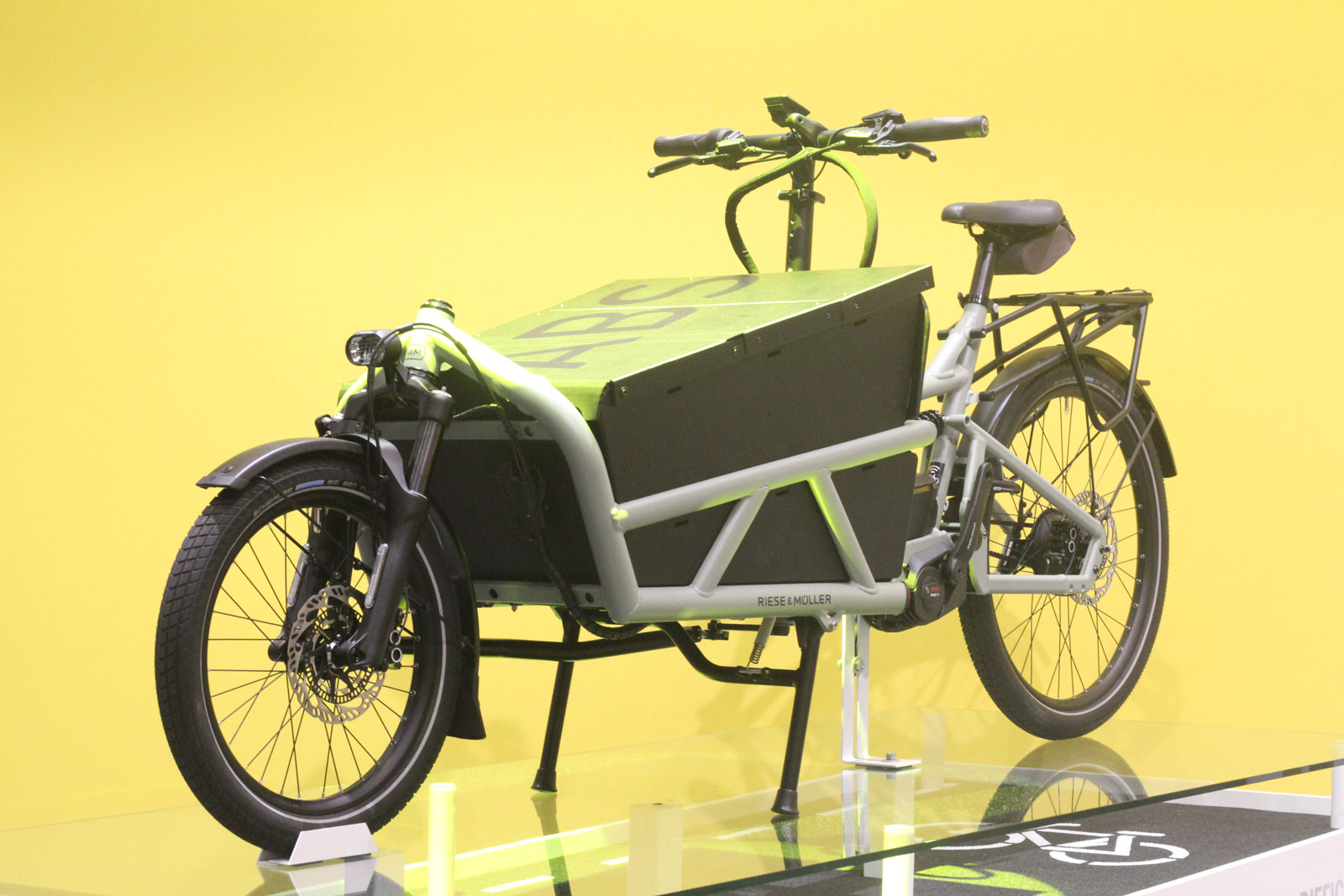 At the Magura stand, we saw a Riese & Müller eCargo bike equipped with the Bosch eBike ABS System; here, the ABS unit is attached to the front of the cargo box rather than the fork.

The Bosch ABS System on eCargo Bikes is tailored to them, with slightly different working parameters to those that are fit for the ABS System on an eMTB. Altogether, there are actually four different types of Bosch ABS System. They are ABS Cargo, ABS Touring, ABS Trail and ABS All-Road, each tailored to work best with the differing grip levels presented by the surfaces each application deals with, and the loads carried. 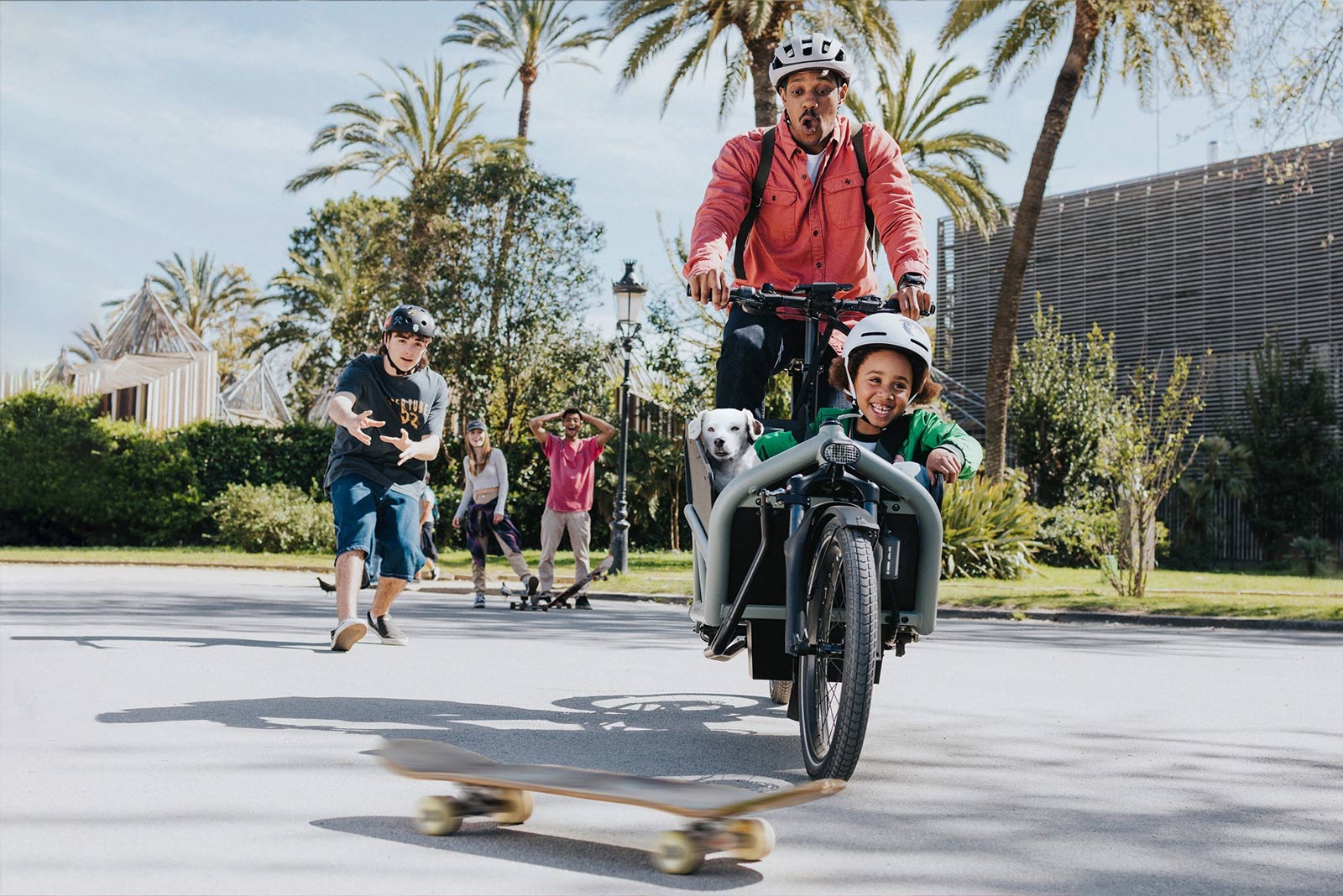 Bosch tells us the ABS Trail mode was developed with input from their MTB Athletes. It is directed more toward “sporty” eBike riders who like to ride demanding trails and difficult terrain. ABS Trail is said to help these riders to ride with more foresight, control and focus in surprising situations, such as a steeper slope or a blind bend. Some 2023 eMTBs with the new Bosch Smart System will have the ability to switch between ABS Trail and and ABS All-Road modes in the eBike Flow App or using their Kiox 300 Display. 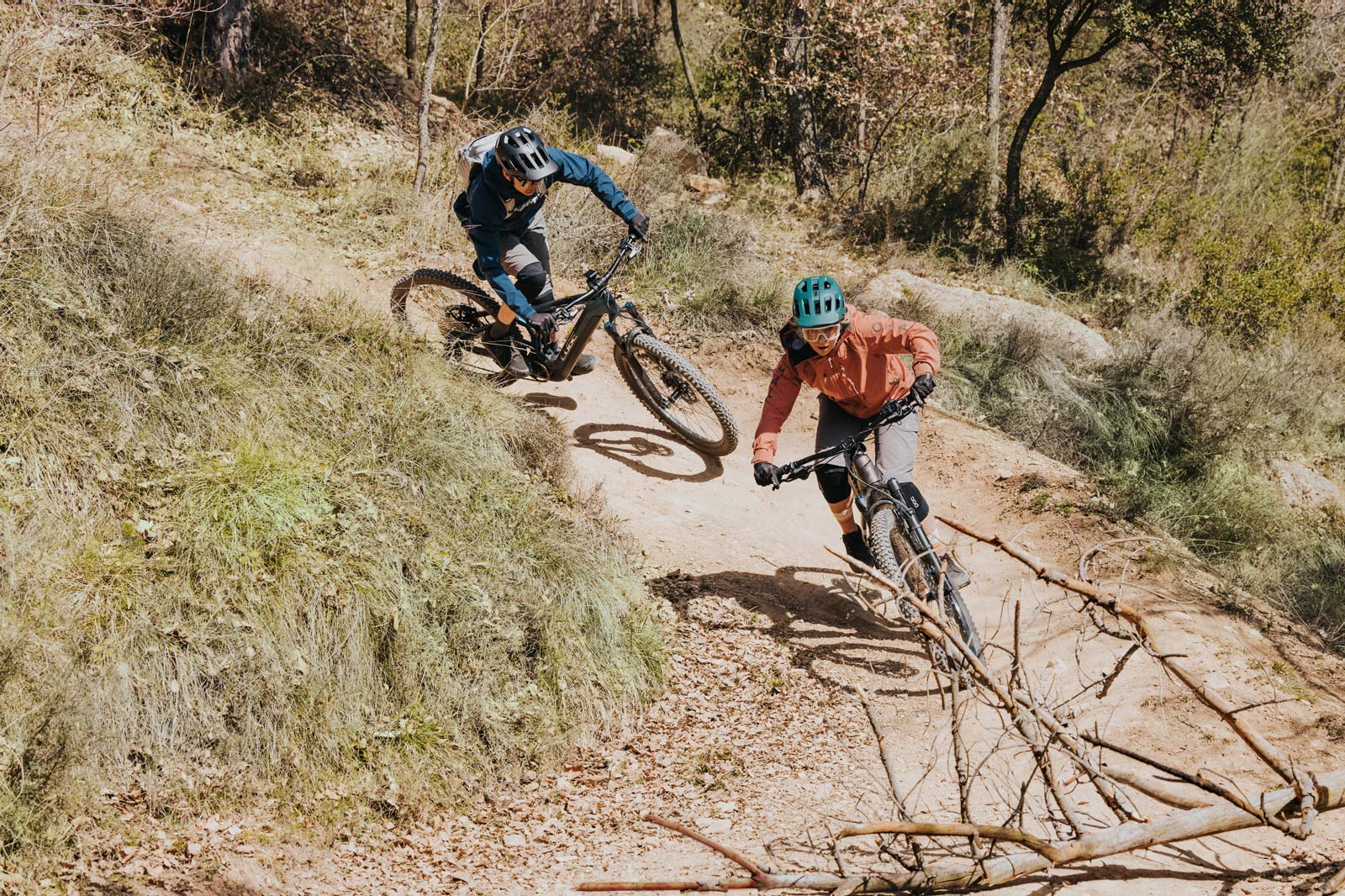 The Bosch eBike ABS System in use on new Cube eMTBs

We wonder whether the ABS Trail System has the capacity to reduce front wheel wash-out incidents on the trail, a common crash scenario often caused by pulling the front brake in a loose, flat corner.

It should be noted that Bosch weren’t the only ones to launch an ABS system at Eurobike this year; Shimano announced their partnership with Blu-Brake, too. Anti-Lock Braking Systems for Bikes and eBikes are now well and truly a thing – expect to see a lot more of them!

All eBikes sold with the Bosch Smart System, across Cargo, Speed and Performance Lines, will continue to receive over the air updates

The Bosch eBike ABS announcement comes alongside a host of updates for the 2023 Bosch Smart System. That is, all the firmware and hardware that makes up any Bosch eMTB System, including the Motor, Batteries, Display Units, Control Units, and Remotes. 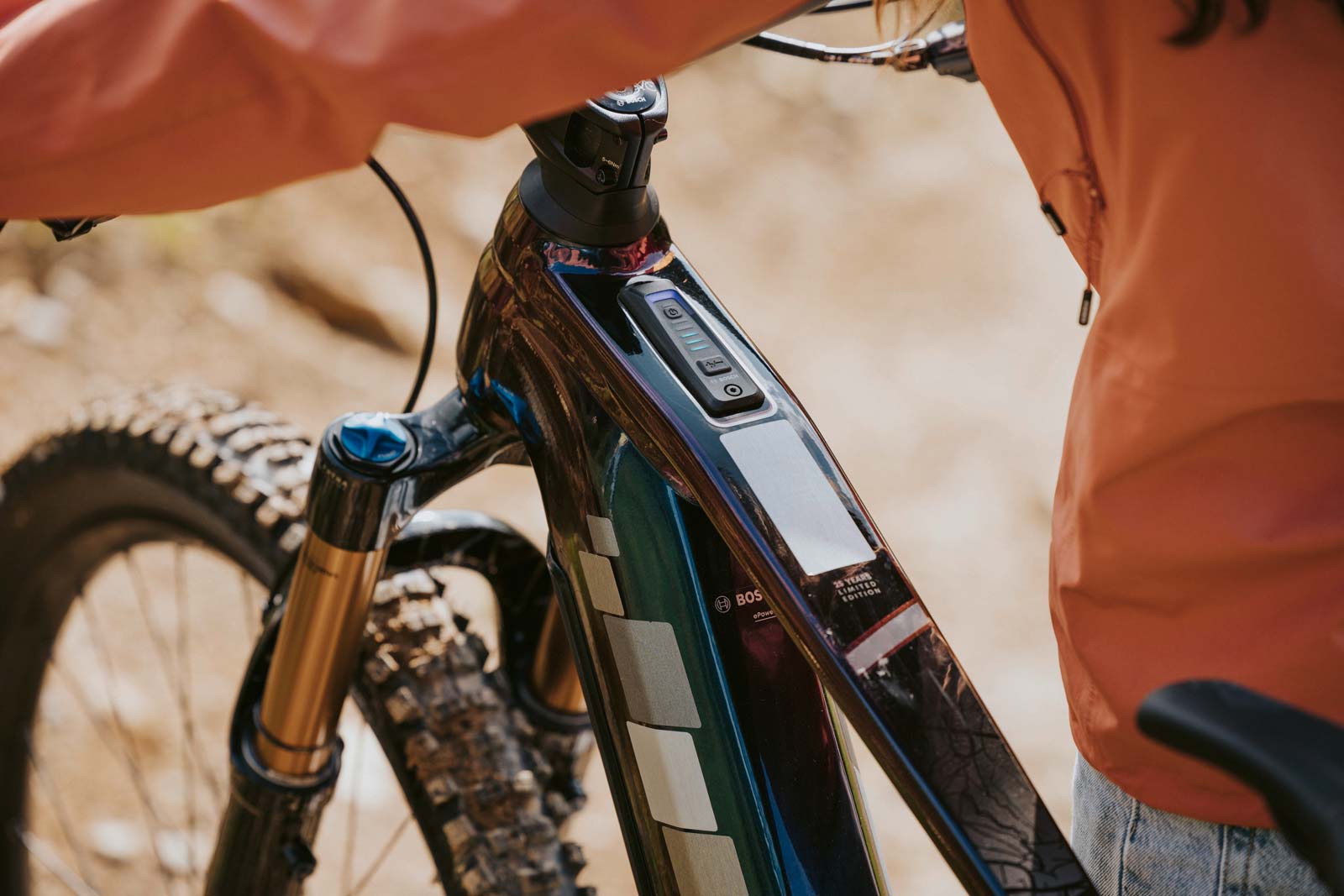 A new System Controller integrates neatly into the top tube; from here the rider can see how much battery is left and which assist mode the system is in. It has two buttons; one allows the rider to turn the system on and off, the other switches between modes. This complements the Kiox 300 Display Unit which can show a lot more information about the ride.

A major update for 2023 is the addition of the Auto Mode. This sounds a lot like the battery saving Tour+ mode of the Performance Line CX seen on eMTBs, but it goes further, able to adjust the assist mode based on riding conditions such as head winds and uphill gradients. The Cargo Bike system will also have (low and behold) a Cargo Mode; this can give support of up to 400%, so will be particularly suitable for trips when involving super heavy loads – consider that some eCargo Bikes have capacity for 440 lbs! Bosch say that, despite the powerful support, starting off still feels very natural and easy. 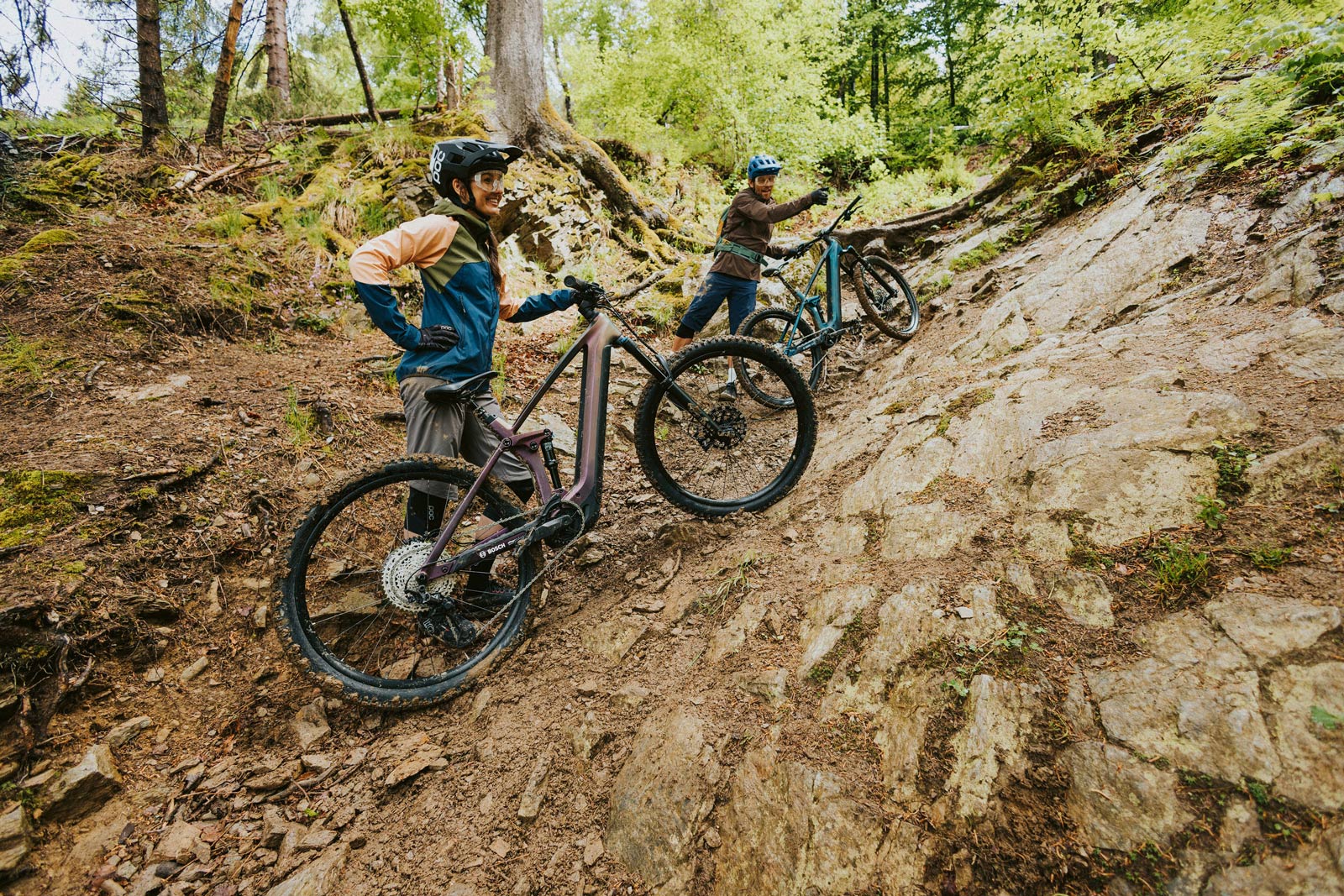 A nice update for eMTBs is the addition of the Hill Hold mode that prevents the eBike rolling back down the hill when you take a break while pushing up a non-rideable steep slope. That complements the existing Walk Mode that delivers a small assist when you’re actually pushing the bike and have it rolling above a very low threshold speed. When the bike automatically enters Hill Hold mode, the rider has 10 seconds to activate Walk Mode again before Hill Hold is deactivated. 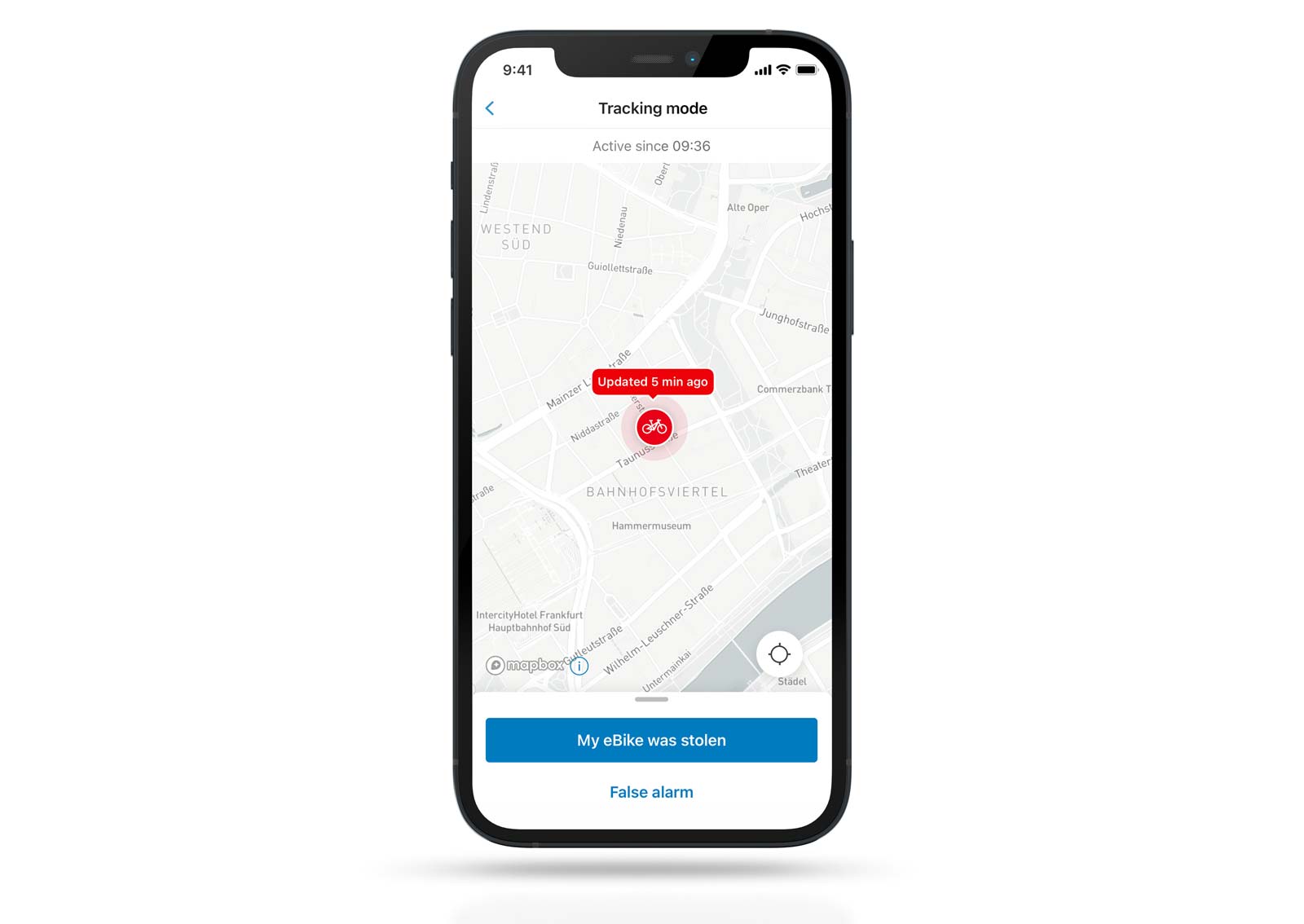 There’s no replacement for a proper bike lock, but in terms of deterring theft in the first place, an alarm won’t go amiss. The 2023 Bosch Smart System introduces an eBike alarm that will go off if the eBike is moved when it shouldn’t be. It’s a two-stage alarm: in the case of slight movements, the eBike emits several short warning tones as a deterrent. If the eBike is moved a lot and the owner’s smartphone is not nearby, it emits a much louder noise.

If the eBike owner confirms the bike was stolen, the bike’s location is then tracked, with a live feed sent to the eBike Flow App on the owner’s smartphone. So, you can follow the eBike’s movements in, almost, real time.