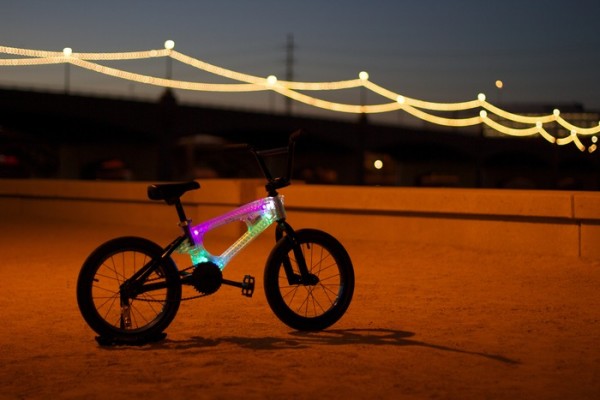 Kids love things that light up. Parents hate the idea of their kid out riding their bike, and drivers not seeing them. That’s why Phantom Frames’ bright bicycle frames seem like an incredibly cool idea. The story of the Phantom Ice and Ghost frames starts with the owner’s son Jack. When Jack’s bicycle light stopped working, he said he wished the entire bicycle would light up. That was the proverbial light bulb, or in this case, Light Pipe. Working with local bicycle designer Ken Spaulding, prototyping led to using polycarbonate tubing fitted with LEDs. From there, the frame evolved into the bike you see here with a front triangle machined from polycarbonate mated to a steel rear end.

Phantom Frames are almost ready for production, light it up after the break. 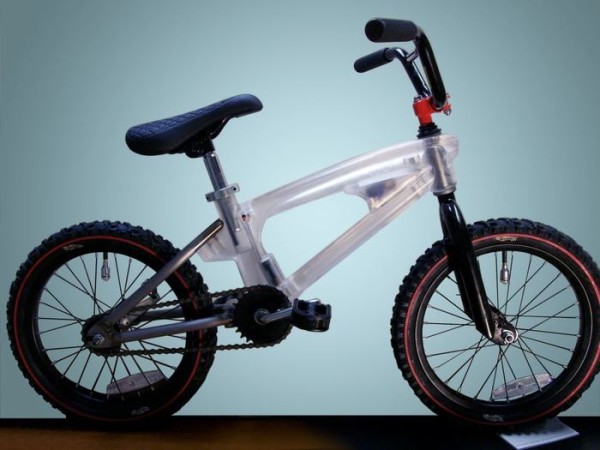 Each frame is based off a 16″ wheeled kids’ bike with standard components other than the frame. Even without the frame lit up, it still has a cool factor because of the translucent tubes. 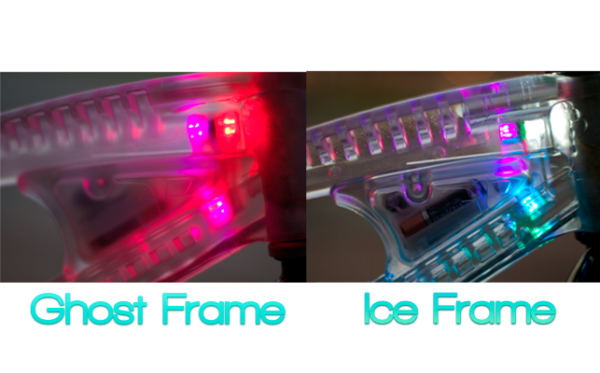 Utilizing two separate LED units that are powered by four AAA batteries, the frame lights up thanks to the “Light-Pipe” design. Starting with Ghost and Ice, the two frames display their inner light differently thanks to the glossy finish on the Ice frame and smoked finish on the Ghost frame. Each bike is customizable with different color LED units which bolt into the frame currently offered in white, blue, red, green, and yellow. 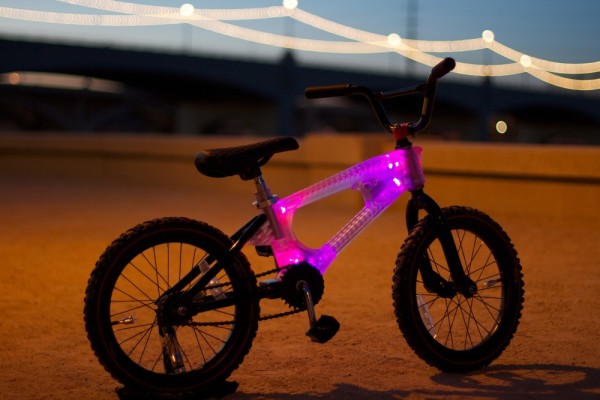 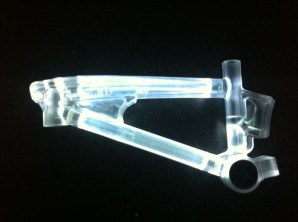 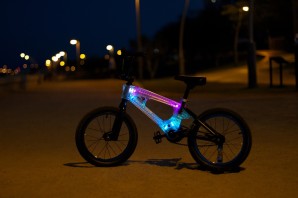 As yet another Kickstarter campaign (shouldn’t it be called Pedalstarter at this point?), Phantom Frames will reach their goal if they get to their mark of $10,000 by this Friday at 8pm. There is one early bird bike left at $125, otherwise the current Kickstarter price is $165 for a complete bike that will retail for $195.

Nice idea, but what is the illumination like from the rear elevation, also would having the whole spectrum of colours not be breaking from the rear red, front white standard for road use.

How are the frames joined together, the bikes are BMX style and so will likely get put through there paces by the kids.

Schwinn tried something like this a few years ago with LEDs in a translucent down tube. As much as the idea of giving kids their own UFO bikes appeals to me, like a lot of Kickstarter projects this raises some serious technical concerns. First off, how durable is that plastic frame and how easily can you repair it? Second, once the novelty of riding something that looks like a Christmas ornament wears off, how will kids like riding what is basically a discount store BSO with a plastic frame?
If I still had kids small enough to ride a 16″ bike I would be more inclined to invest in a higher quality bike and some EL wire so that they have a good riding bike first.

I think the idea is great, but I question the number of children small enough to ride a 16″ bike that are out riding once it gets dark.

It could make better sense for a 20″ bike, but will the kids on a 20 be too rough on the poly-carbo frame??

I’m also lost at the differences between the 2 frames: They both look the same to me. Am I missing something??

Most 20″ bike that are purchased for kids are actually to large for them and have to long of a top tube. If a kid is going to be doing more than just riding around the neighborhood and want to ride park, dirt jump, or just trails, a 16″ or 18″ tend to work much better for them. Even my wife likes riding the park more on our 18″ than a 20″ with a 21″ top tube. My 8 year old (who is very small for her age still finds the 18″ a bit large for her. The biggest issue with many 16″ and 18″ BMX style bikes is that they mess with geometry to much to make it easier to ride while sitting down so when the kid stands up to move around over the bike they are almost to far forward. With all that said though I agree with the statement cool idea but how long till the kids are sick of riding a christmas tree.

As reference a few good brands that make geo proper 16 and 18 bikes are Fitt, Kink, We the people, stolen, subrosa, and sunday to name a few. Yes they will be a bit heavier but well worth it.

@Clay, “Most 20″ bike that are purchased for kids are actually to large for them.” Where do you get your statistics from? I work at a bike shop and would disagree with you.

Are there really that many people allowing their children to ride in the dark while unsupervised? You can put all the lighting you want on your kids, but at the end of the day, you ought to be supervising them.

There’s no substitute for common sense, ideas like this give people a wacky idea about safety.

Where in the article does it talk at all about unsupervised riding?

Seems like a cool idea to me. Any and all extra visibility on the road/sidewalk/trail/path/wherever seems ok to me.

They can’t even get the bikes chain tension correct, why would I trust my kid riding something they put together?

@alanM. I will admit my “most” is coming from personal experience working in the bike industry, riding a 20″ most of life, and also racing BMX myself and helping my family. Most of what I am drawing from though is being at a bike park (concrete, dirt, or just a simple pump track) and watching other kids try to control a 20″ bike, if time permits, after talking with parents, I allow them to ride my kids bikes so that they can see and feel the difference. One good example I found was purchasing a 16″ Haro for my daughter thinking that it had good geometry and not the standard kids bike geometry with the bottom bracket moved forward. It was after that that we started racing and i could quickly see that the bb was set up to be ridden while sitting down and not so much for pedaling out of the saddle. With all that said this is just my opinion though.

@Clay I think you are getting mixed up with Kids bikes and BMX bikes.

We are talking about KIDS bikes. Not BMX’s