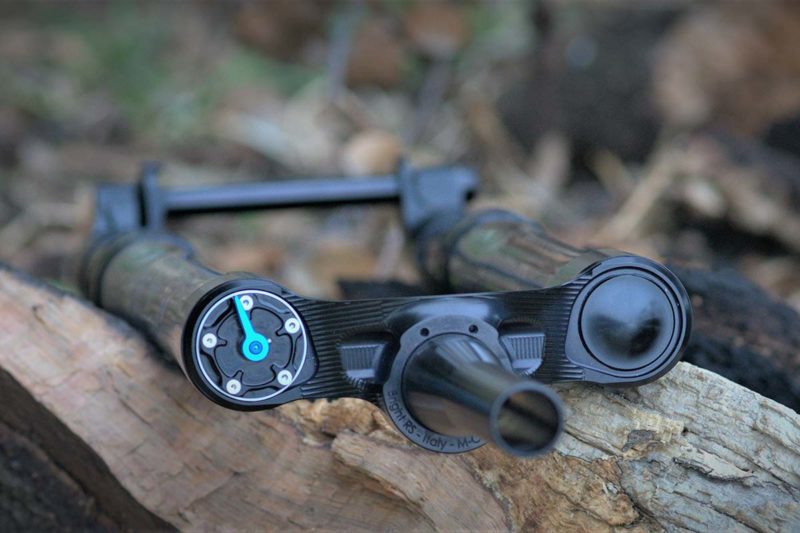 Custom suspension manufacturer Bright Racing Shocks have updated their short travel fork for 2021, releasing the 5th Generation F929 xCO. This is the top-end racing model with 35mm stanchions telescoping through 46mm carbon uppers. The Italian Brand claim to have overcome the limitations presented by other upside down forks, claiming enhanced precision over traditional upright designs. 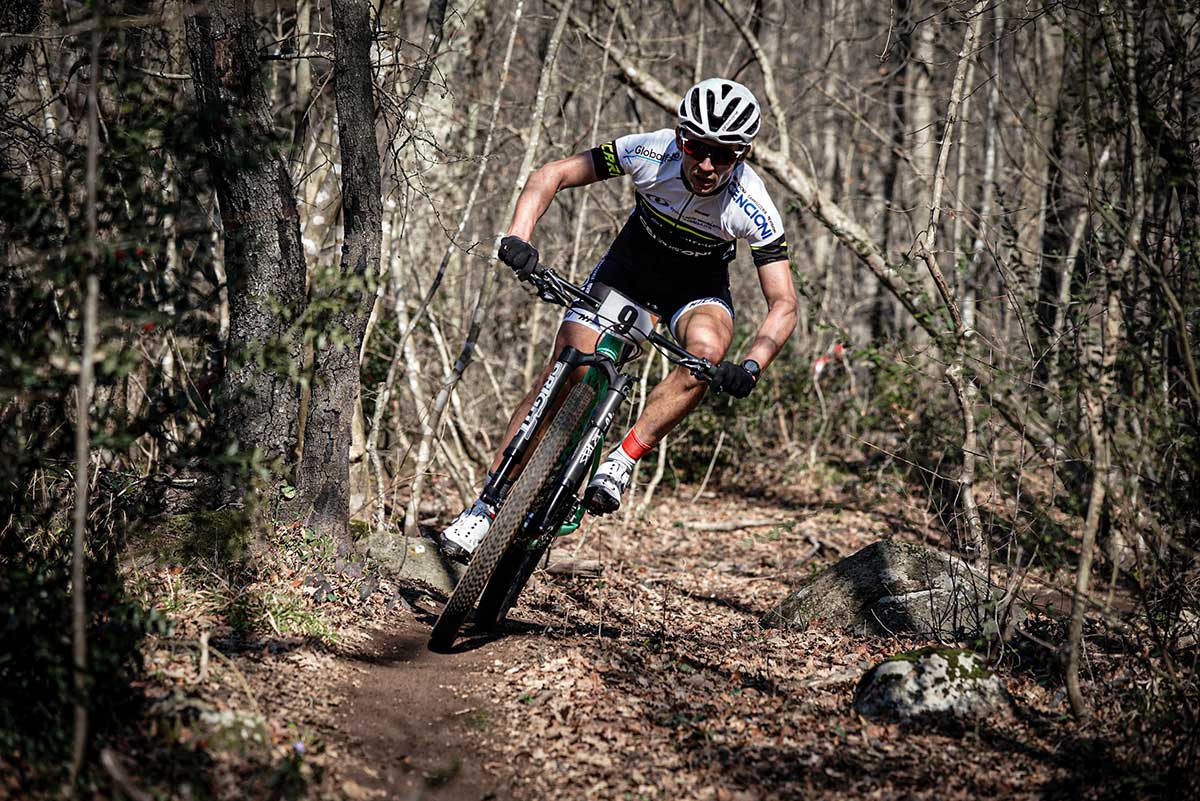 Bright Racing Shocks call the new F929 xCO fork a ‘pure racing weapon’, with 100mm-120mm of adjustable travel for XC Racing. As such, the fork is designed around a 29″ wheel, with great emphasis placed on improving lateral stiffness while keeping weight low.

While inverted forks are well-known for their fore-aft stiffness, other attempts at the upside down design have reportedly suffered from a lack of lateral and torsional stiffness. Bright Racing Shocks believe they’ve solved these issues in the new F929 xCO fork with “special advanced mechanical architecture combined with a complex guide system”. This is their own proprietary way of distributing the bushings that is said to greatly enhance precision. 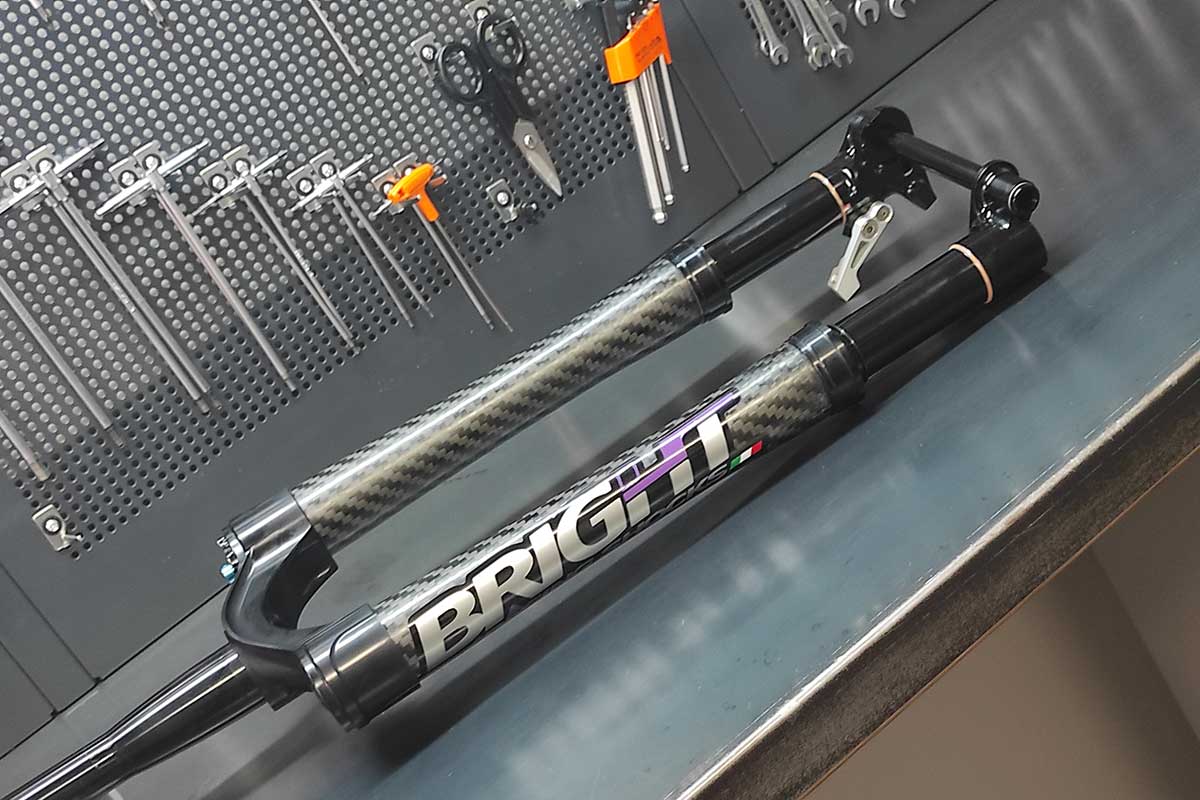 The guide system is not the only thing responsible for the increased lateral and torsional stiffness. Much of this can be attributed to those monster 46mm carbon composite outer legs. 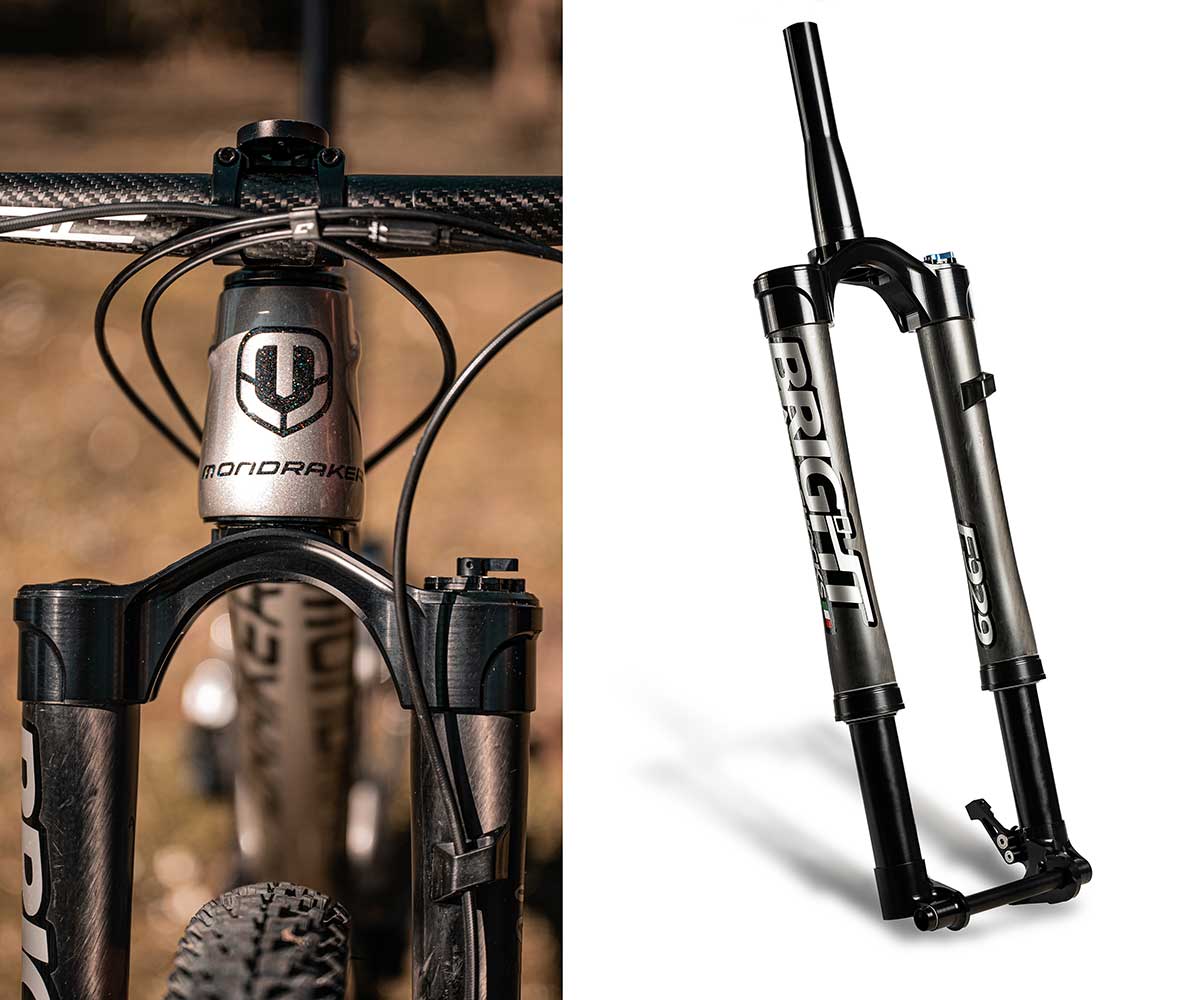 The layering of carbon is designed to absorb lateral (and torsional) energy. Specific layering, with specific sequences of fiber orientation and shapes, is optimized to achieve this damping effect in the material. Bright Racing Shocks have increased the number of UD carbon fiber layers in the new xCO model, improving longitudinal stiffness by a claimed 20%. 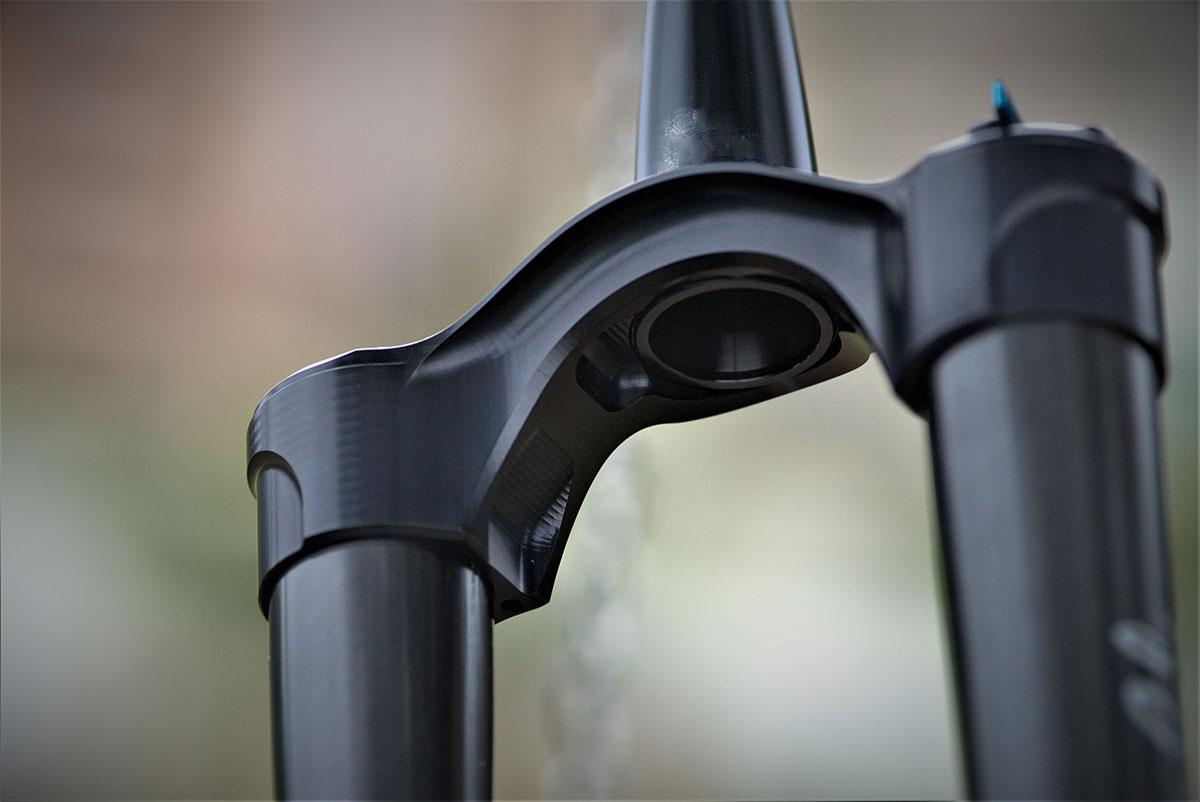 As compared with the previous F929, the crown of the new xCO model has an updated shape resulting in a 10% increase in lateral stiffness. Also new is the finish on the fork stanchions, resulting in improved smoothness and reduced friction. 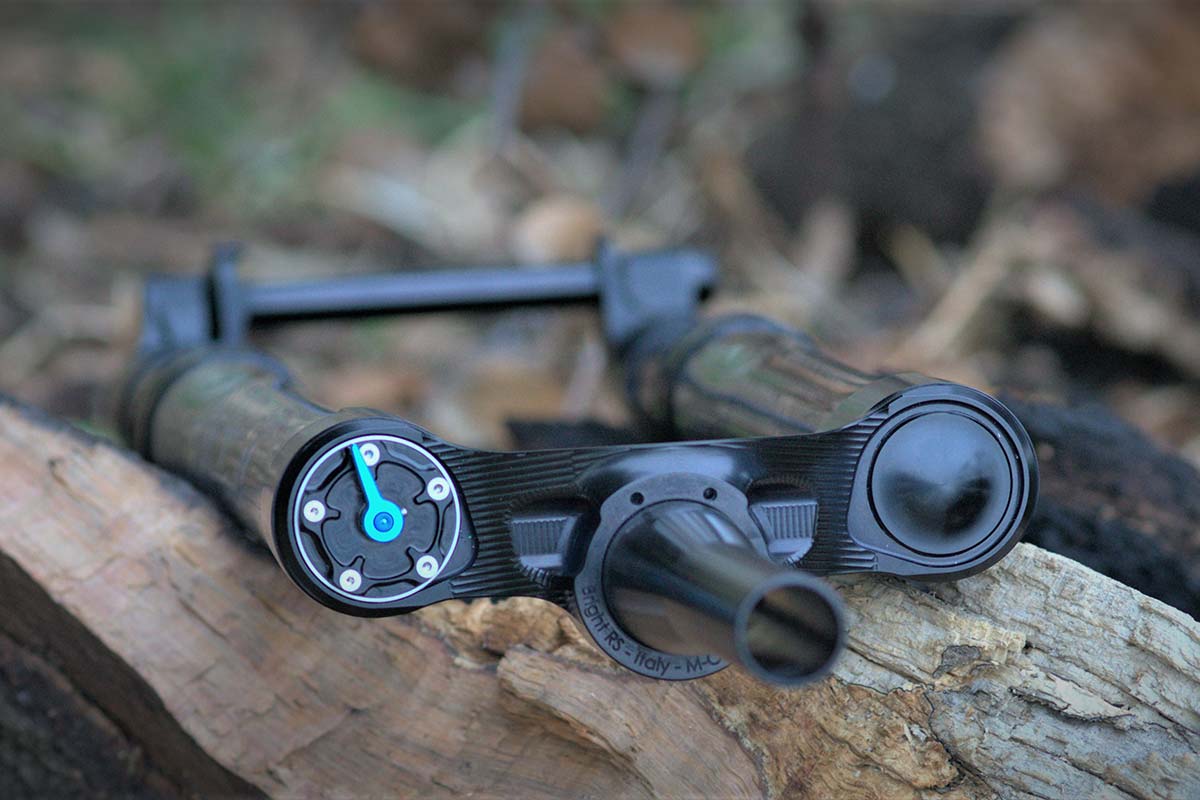 The F929 xCO fork packs both the air spring and damper cartridge into the left fork leg, much like we see on the Cannondale Lefty fork. Why? 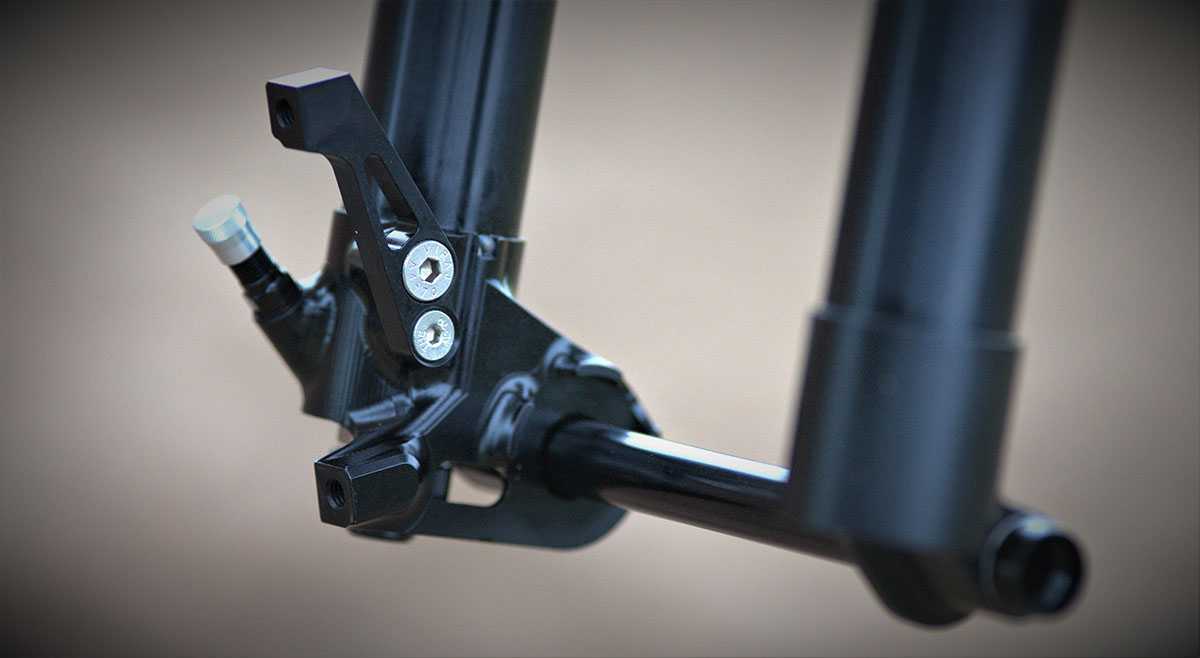 Pablo, the founder and chief engineer at Bright Racing Shocks, explains that the presence of the spring and damper shaft in separate fork legs can result in a fork lacking a precise ride feel. This issue is circumnavigated in the vast majority of modern fork designs thanks to the presence of the arch which acts to stabilize the fork legs with respect to one another. But the Bright Racing Shocks F929 xCo, and other USD fork designs are lacking this arch. 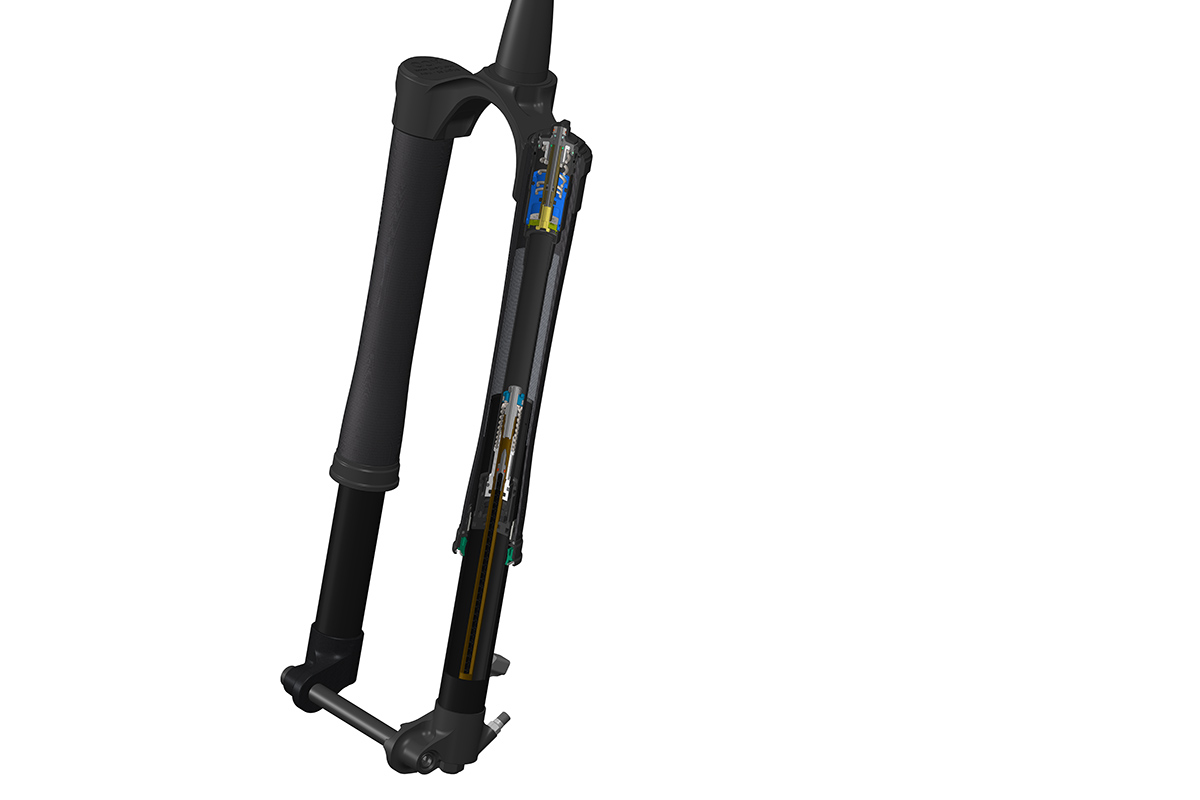 This is why Pablo decided to put all of the fork internals (the air spring and the damper cartridge) into one fork leg only; one on top of the other. 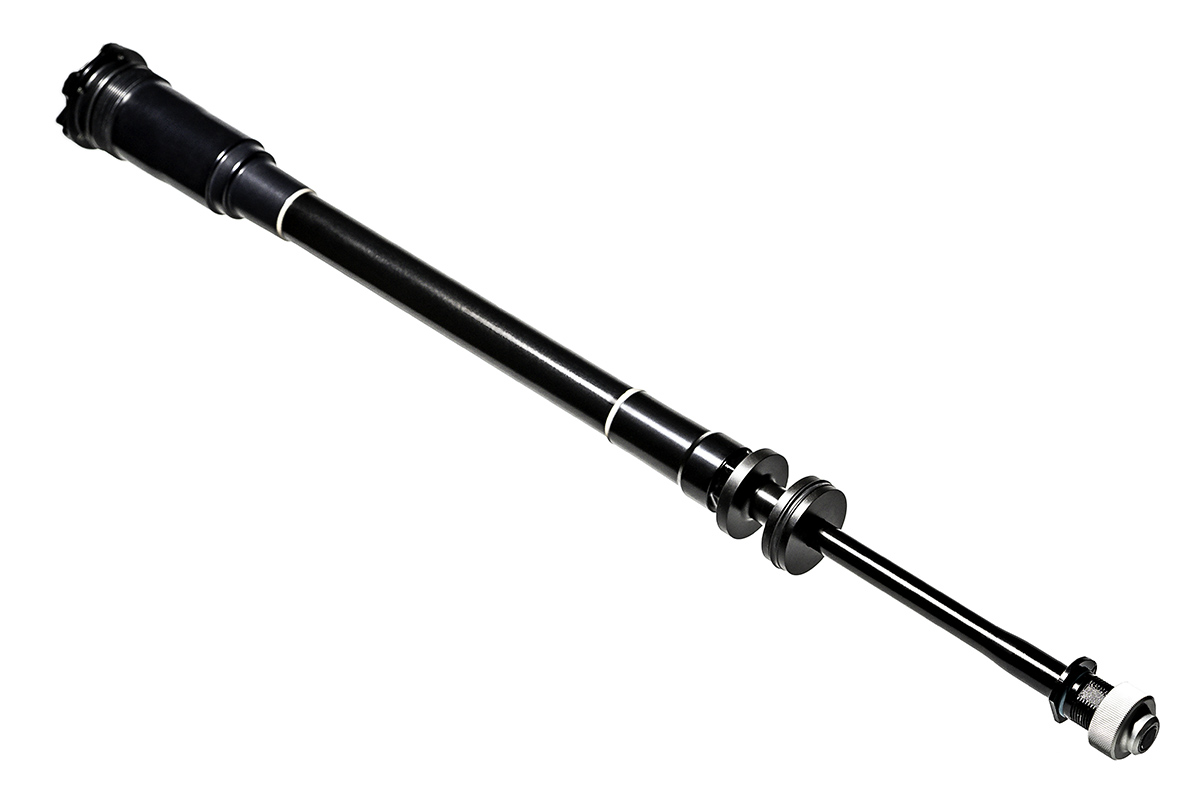 Is there anything unusual about how this fork actually rides?

The Bright Racing Shocks F929 xCO allegedly runs a very low static sag. This is because the damper system is actually pre-loaded. The brand don’t use a bladder to compensate for oil volume changes in the cartridge; instead, they use a rigid diaphragm as you might come across in high end shocks. 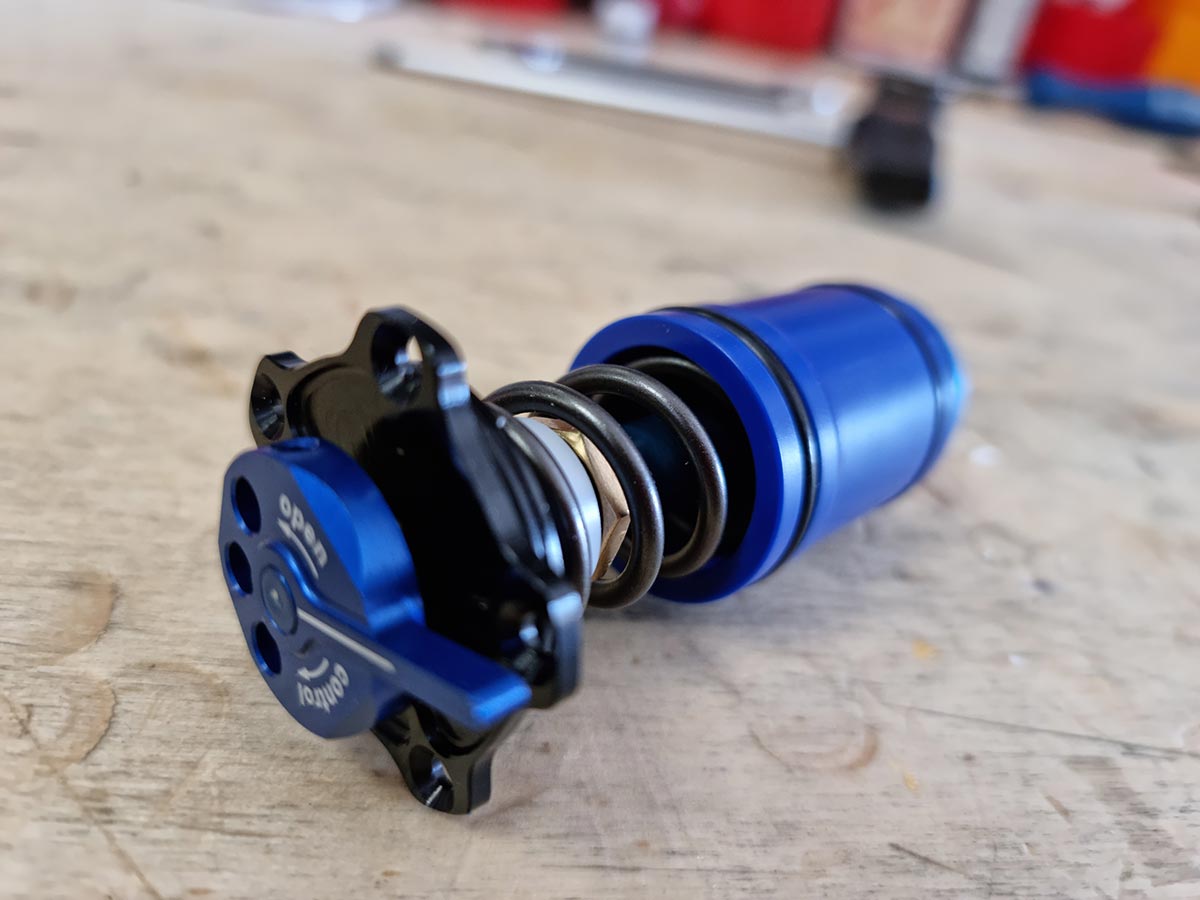 Inside the damper cartridge is a high load coil spring that pushes into said diaphragm. This, along with the pressurizing of the damper and the organization of the piston, valves and spring, means the fork doesn’t need to run high air spring pressures in order to achieve a low static sag. Ultimately, it should mean the fork has slightly more effective travel available as compared to a fork that runs the usual ~25% SAG. 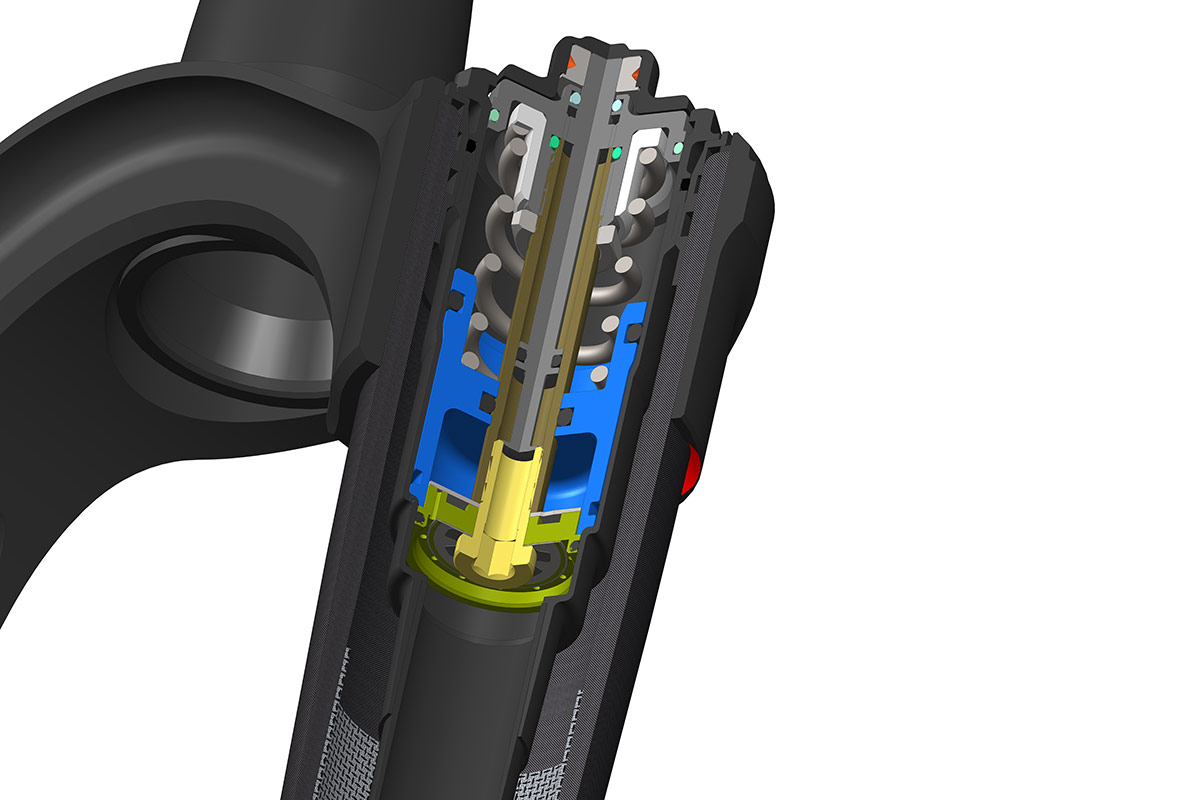 looks great (apart from the horrid decals)… any weight limit?

Going 20mm on the axle would have been an addiitonal way to improve rigidity.

The lateral stiffness in NOT related to the axle
Diameter. Many topics in mtb field are
Coming from some old legends

Anything you do to the uppers of an USD telescoping fork is only going to have minimal impact on the effective lateral stiffness of the system, because it’s much more dependent on torsion perpendicular to the axle than deflection of the uppers. Changing the axle-dropout interface will have a much larger effect.

Standard axle sizing? No stupid unique hub like the RS-1?