Canyon has jumped into the premium gravel bike market with a new pair of Grail carbon adventure road bikes. The most striking element of the Grail CF is without a doubt the double-decker Hover bar, but the bikes’ off-road endurance and comfort tech goes much deeper. Canyon sees gravel as an opportunity to embrace adventure and exploration in a bike destined to ride long and far from simply paved roads. With wide tire clearance, predictable handling, light weight, and a comfortable fit, the new Grail wants to blur the line between road and trail, mixing dirt and pavement.

Canyon didn’t want to just stretch out a road bike, slacken up a cross bike, or put a cross-country mountain bike on a diet to tackle dirt & gravel roads. Instead they decided for more of a ground-up rethink of what they wanted. They are calling the result the Hover System. The Grail is still seen as a road bike, so Canyon wanted to make sure that it would still be quick and nimble on smooth surfaces. So the contact points are still roadie in nature and placing. In fact, look at the drop bar position relative to the bottom bracket, Canyon now calls this bar top measurement Stack+ & Reach+, and you’ll see the fit of the Grail slots in between their Ultimate road race bike and the Endurace endurance road bike. The Grail actually drops the bar 1cm lower than an Endurace. From there your saddle is going to be in the same place too. But to work off-road and to make the bike stable in the rough stuff, Canyon wanted to allow the rider to hover above the extra impacts & vibrations of mixed-surface riding. The Hover bar is the most obvious element of that – sitting the rider up & back on the upper crossbar that can soak up the bumps – but it also works together with their latest split, flexing VCLS 2.0 seatpost out back. Add in fat, tubeless tire setups and the Grail is meant to have you floating over road gravel roads and trails. 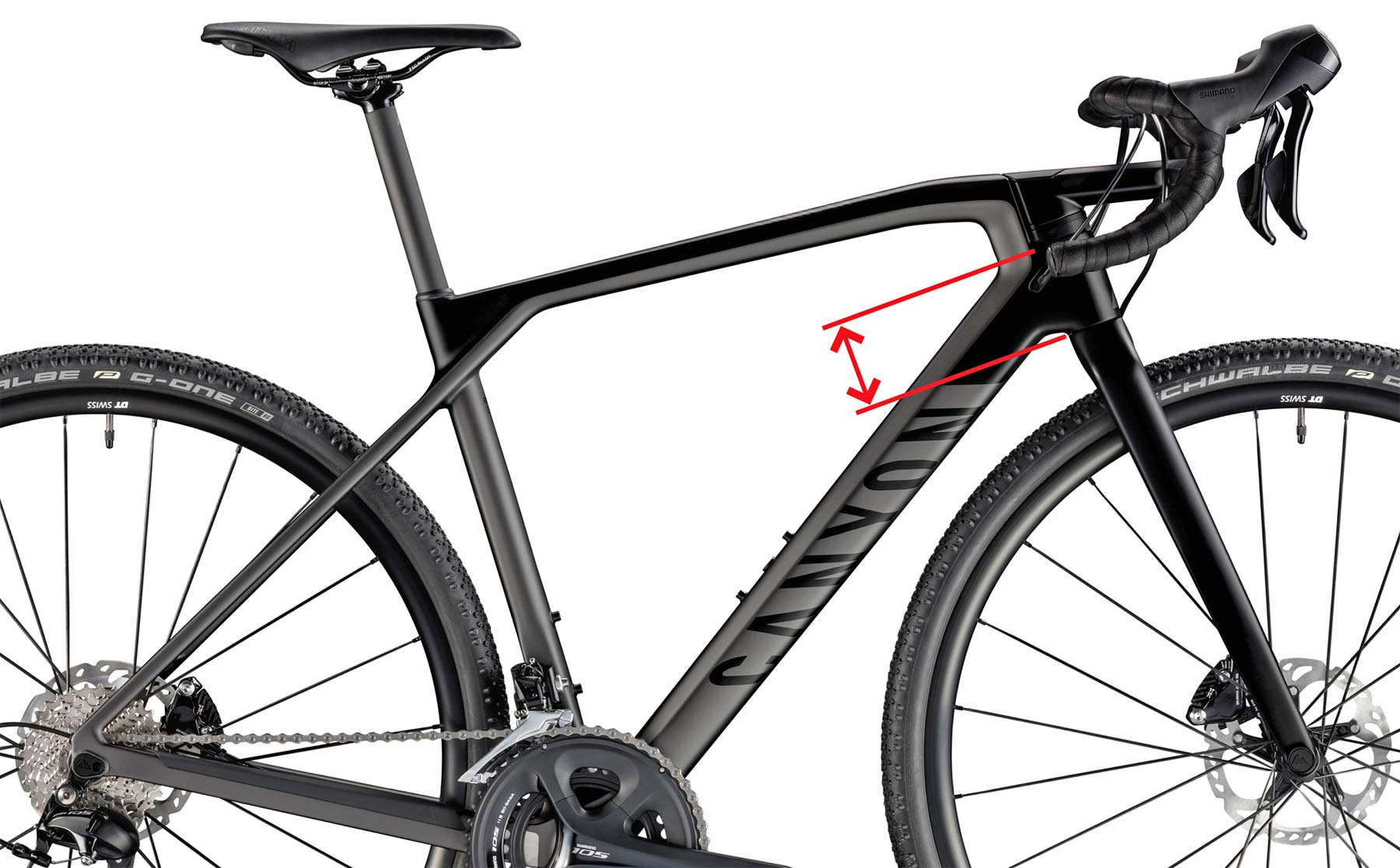 Jumping back to the Hover bar, with the effectively short & upright position of the flexing crossbar – where the hoods are also based and where the rider will likely spend most of their time – to make that work the new Grail has to have a super short headtube. Even more so when you figure in adequate fork crown clearance for 40+mm tires.

The new Hover bar is rather unique, but that also means this bike is entirely designed around it. You will not be able to swap out to any other regular bar + stem setup available at the moment to fine tune your fit, or to even adjust the angle of your bar if you prefer something other than totally level. You do get 15mm of stack adjustment, though. The wide for its size Hover bar does come with a range of effective stem lengths that vary with frame size (60-105mm for XXS-XXL), so it is theoretically possible to move around a bit if you can get ahold of a different size bar from your local Canyon dealer (haha, just kidding) if you have fit issues. So if you buy this bike, it will be very important to size the bike you need off of desire bar reach. With that said, the idea of separating the part of the handle bar that you cling to while pedaling down a washboard roads into a more compliant Flex Zone, while maintaining all of the handling stiffness needed while descending smooth roads at high-speed is compelling. Canyon says they just wanted to flip the logic of dropbar design and make the bar stiffest in the drops and most compliant as you bring your hands closer to the center and top of the bar.

Just now where should I mount my Garmin, my GoPro, and a headlight? (unsurprisingly Canyon has an out-front style Garmin mount that bolts under the base bar/stem.)

But what about anything other than Shimano levers? Have a look down at the frameset below that ships with Shimano-ready band clamps pre-installed… Could you even mount another set of levers to the closed loop bar?

The rest of the frame… The gravel frame is of course built around wide rims and high-volume tires, and gets on average a 40mm longer wheelbase than the Endurace. All of the complete bikes get spec’ed with 40mm Schwalbe G-One Bite tires on 22mm internal rims, with what looks like plenty of clearance for much bigger rubber.

To make all of that work across a wide seven size range, Canyon has smartly opted for 650b wheels for the smallest XXS & XS bikes. We’ve seen that really help preserve geometry and handling for smaller riders without running into toe overlap. The frame itself is available in two carbon layups – Grail CF & Grail CF SLX – that otherwise share the same tube shaping and features. Claimed weight for the SLX frame is as low as 830g (medium) or 1040g for the standard SL frame. And both share the same SLX fork which at one point Canyon says weighs 410g, and then lists as just 295g with a 210mm steerer.

Every gravel bike needs a bikepacking bag option, so Canyon partnered with Topeak to tailor a set of bags to the Grail’s unique tube shaping and bar. The standard SL carbon bike comes in different configurations depending on the market with Shimano mechanical and Di2 builds, and one or two women’s WMN builds ranging from $2300-3600/2200-3600€ depending on spec.

Availability varies depending on spec, color & size, with some in stock now and shipping out to buyers, most sizes available by mid April, but a few colors not expected until late May.

Seriously…What the f€#k.. I always liked Canyon bikes, but this…

It’s so ugly…but I want it

this cable routing yells eTap all over it… but that green color kicks ass!

I feel like they’ve made some poor assumptions in regards to that bar.

When I am riding washboard flat or rolling hills on the tops of the bar is the time I need flex in the bar/stem the least. I am most upright and can easily take load off of my arms and relax my grip using my back and core strength (which admittedly isn’t great) to let the bike float a little bit.

When I’m going down a long washboard downhill and need to be on the brakes in the drops I am the most leaned over and need the most compliance from the bar to help reduce fatigue on my hands and wrists and use less core strength thus conserving energy overall.

But they’ve made this bar stiff when it is needed to be compliant and flexy when it doesn’t matter.

Same goes if you actually ride singletrack or other techie type stuff. Compliance when you’re in the drops and on the brakes and well who rides any of that when you’re on the tops of the bars.

Plus they only test this bike to an ASTM level 1 which is for bikes meant to be ridden on paved surfaces with the wheels never ever leaving the ground such as a tri bike or road race bicycle. Level 2 is where standards call out unpaved and gravel road use.

How are the levers fitted????

will
Reply to  John

I imagine you just complete remove the band clamps to get them on the bar, then reassemble. Obviously not going to slide the levers past that crossbar!

Seriously this is a good question. Can open up a lever band clamp without damaging it?

I almost thought the bar was to pieces, but this pic seems to show that even that wouldn’t help.

Looking at the frameset, it seems to come with a Shimano-specific, openable clamp that does wrap around the bar and then bolts to the lever body. Because no, typical band clamps cannot be opened for the most part.

That’s pretty clever. They should design it to give some downforce.

SO MUCH GRIP (In Clarkson’s voice.)

Canyon, what happened to your design department?

I guess engineering wise you are on-track in developing and producing bikes and accessories that target certain performance goals and markets; but in terms of design (aesthetics) something has changed.
First your new cyclocross frame, and now this, both plainly said (my opinion) freaking ugly.

Why didn’t you pursue something more conservative but still innovative, e.g. making a modern and nice-looking next generation “Girvin” inspired suspension stem in order to get flexibility / suspension?

Good thought but not innovative. Redshift makes great suspension stems, and while it’s subjective I find them nice-looking. Plus they come in any length, different rises, move up and down as much steerer as you’ve got, you can tune the suspension to taste/based on weight, and they don’t commit you to one bar width/flare/angle. This bar is gimmickry that will age as well as Biopace chainrings or those absurd 90s Roval wheels. The reviews I’ve seen all say they can’t even feel any bar flex on the tops, in exchange for which you give up all reach/cockpit adjustability beyond 15mm vertically, and get an obstruction in the middle of the drop. Major fail.

Is this a joke? If so very good but a little early if not, oh dear oh dear

April fools a little ain’t hurt no one! Canyon going to be blowing these out at Sports Authority prices.

So no compliance (of much) when on the hoods (where you spend most of the time on more bumpy technical terrain (as you need to handle the brakes).
And whats with the bar bag, this bar gives you the perfect opportunity to put it out of the way under the lower bar, instead they stack it on top and put straps to where your hands go?

I love the idea off a bike co innovating like this but I can’t help to think we are going to see this one in a article titled ” bike tech – what were we thinking” Right up there with the Softride in my mind.

Just one more double-decked reason “gravel” riding is the stupidest trend in cycling in the last 20 years. Just call it “adventure” or even “monstercross” for chrissakes!!

To hell with taping that sumb*tch up…..

Different frameset dimensions with no other compatible bars or stems?!? WTF? This is absolute madness, and they shouldn’t sell even one. 🙁