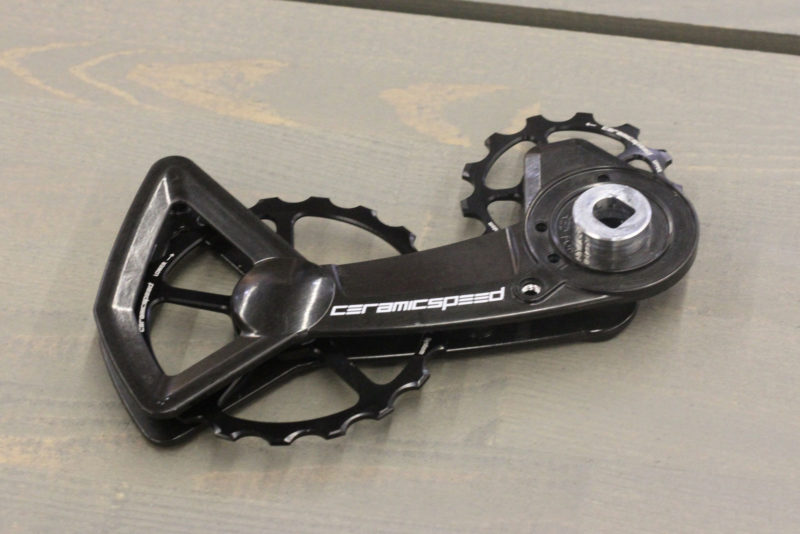 CeramicSpeed has expanded its line of OSPW derailleur cages, bringing the reduced friction benefits of larger pulley wheels and the increased clearance benefits of a shorter cage to SRAM XPLR gravel groupsets. SRAM Red, Force and Rival derailleurs are accommodated for. We were also shown the limited edition Cerakote OSPWs for MTB derailleurs, only 100 of which will be sold in each color. Finally, there was also something for the mechanics; a specially designed bottom bracket seal and dust cover service tool. 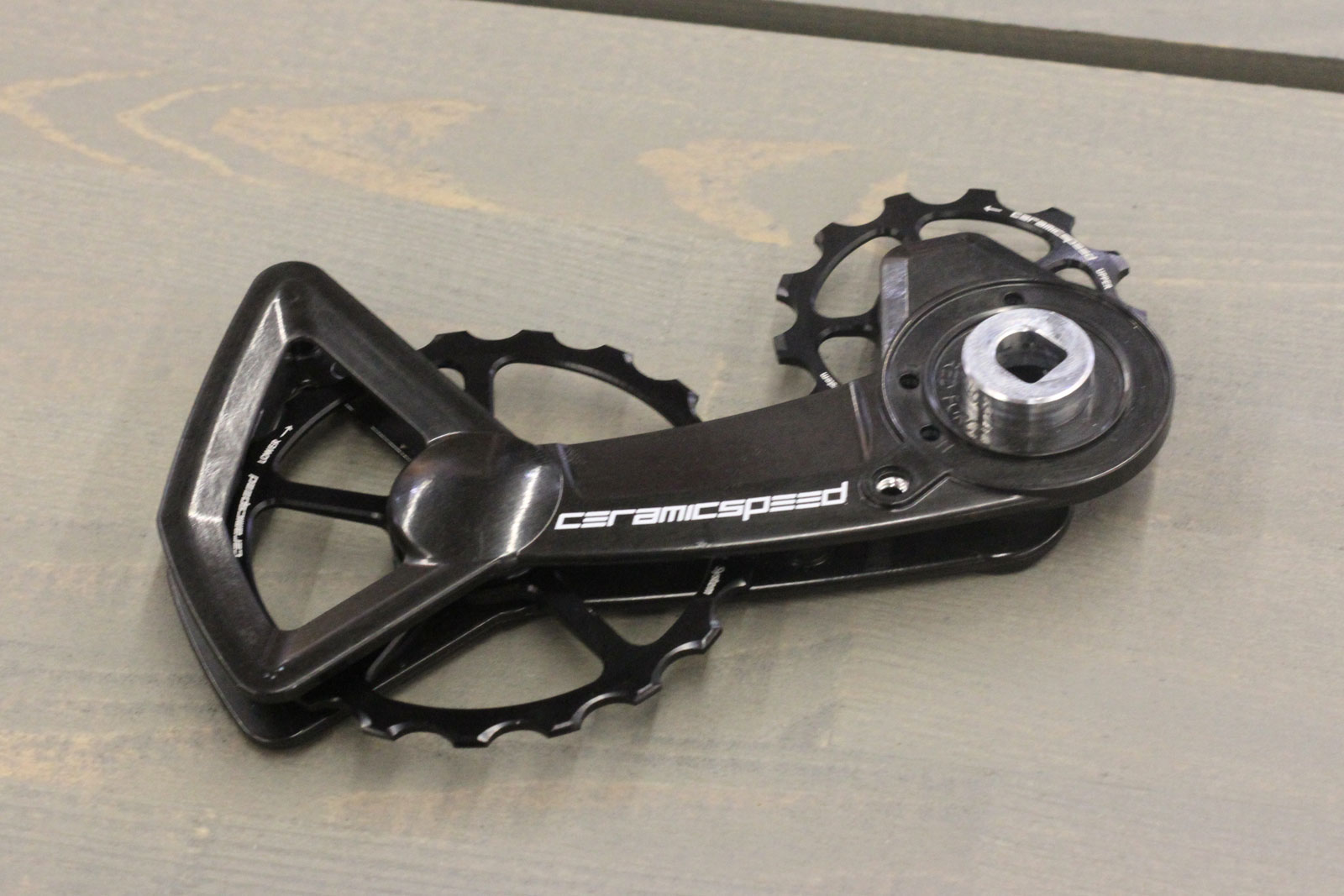 CeramicSpeed has announced a new OSPW for all three SRAM XPLR groupsets for gravel, offering an upgrade for anyone running the Red XPLR eTap AXS, Force XPLR eTap AXS, or the Rival XPLR eTap AXS rear derailleurs (though an adapter is required for the latter). These work with cassettes up to 44t. 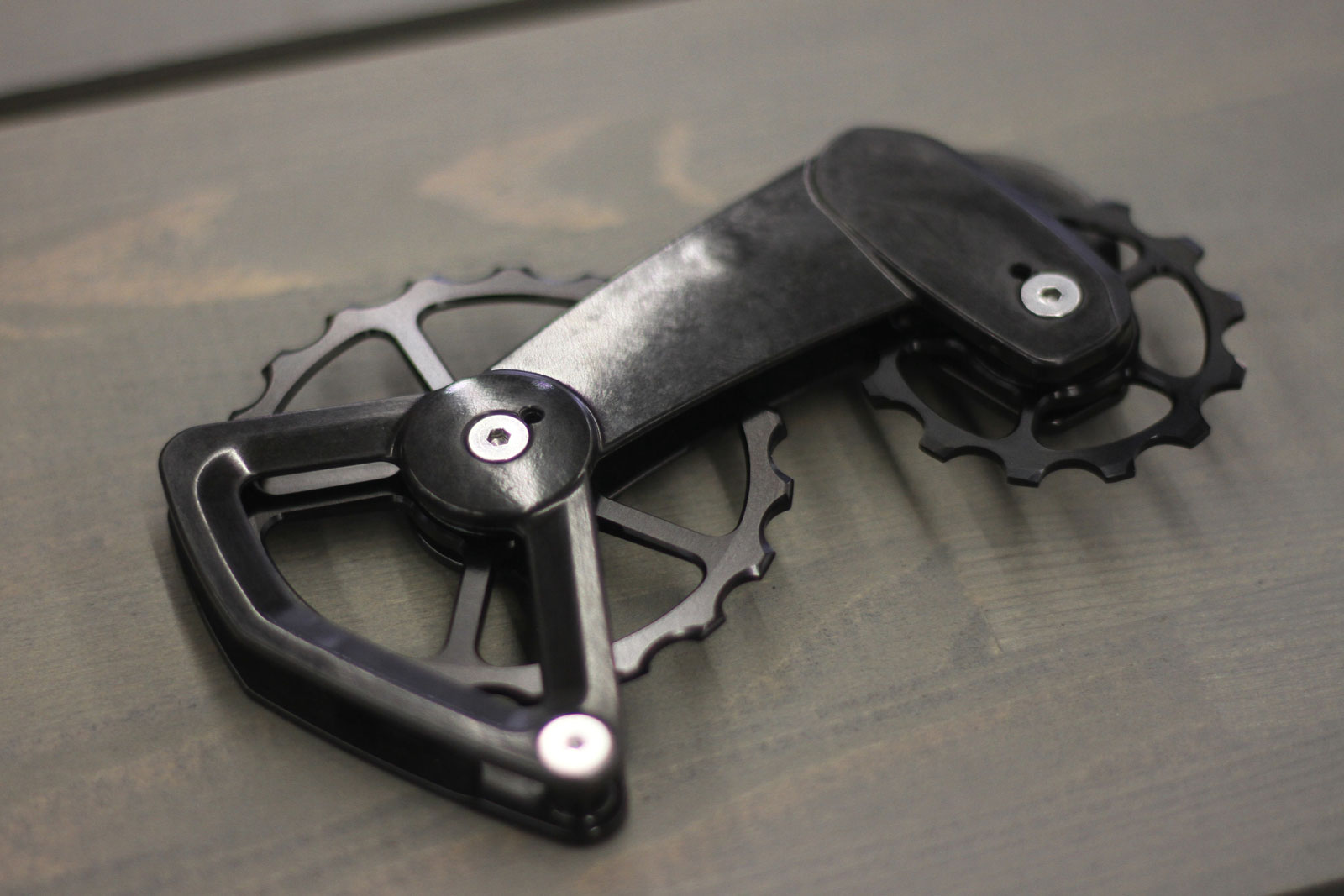 The CeramicSpeed OSPW for XPLR has an upper pulley with 13t while the lower pulley has 19t.

The OSPW has a new cage design with improved stiffness thanks to its shorter length; it’s actually a bit shorter than the stock cage on the above mentioned derailleurs, thus doesn’t sit so close to the ground. That increased stiffness has allowed them to drop one of the attachment bolts, so now there are just three of these. 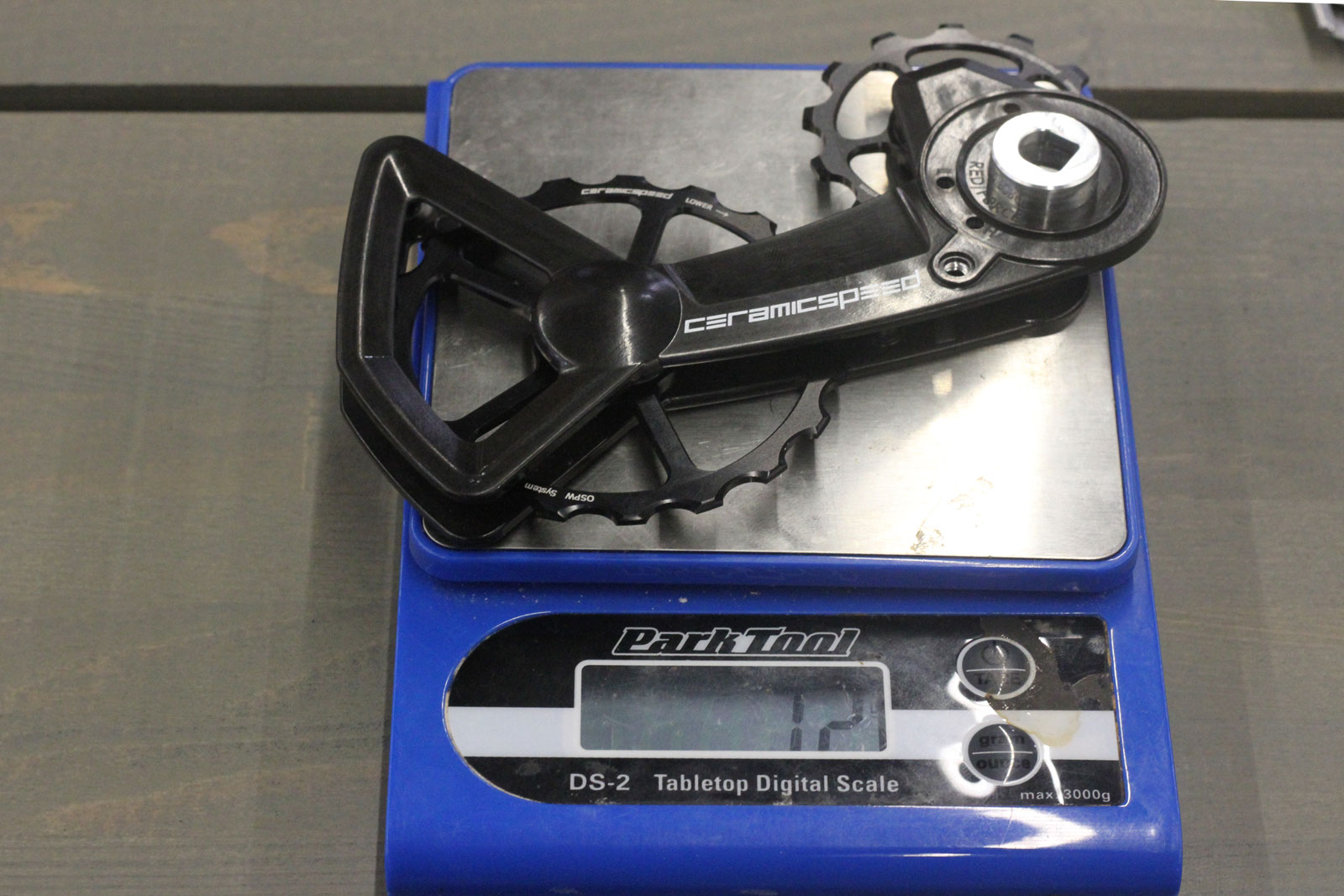 On our Park Tool scales, the OSPW for Red/Force SRAM XPLR AXS weighed in at 72g.

The CeramicSpeed OSPWs for XPLR will start shipping on July 28th, available in standard or coated versions retailing at 529 € and 599 €, respectively. The pulley wheels themselves are available in a black, red, blue or gold finish. 3D printed Ti Pulley wheels are also on their way.

In the box comes the OSPW, plus a

derailleur body spacer for Rival fitment, a custom tool for removal of the stock cage and securing of the OSPW System, and 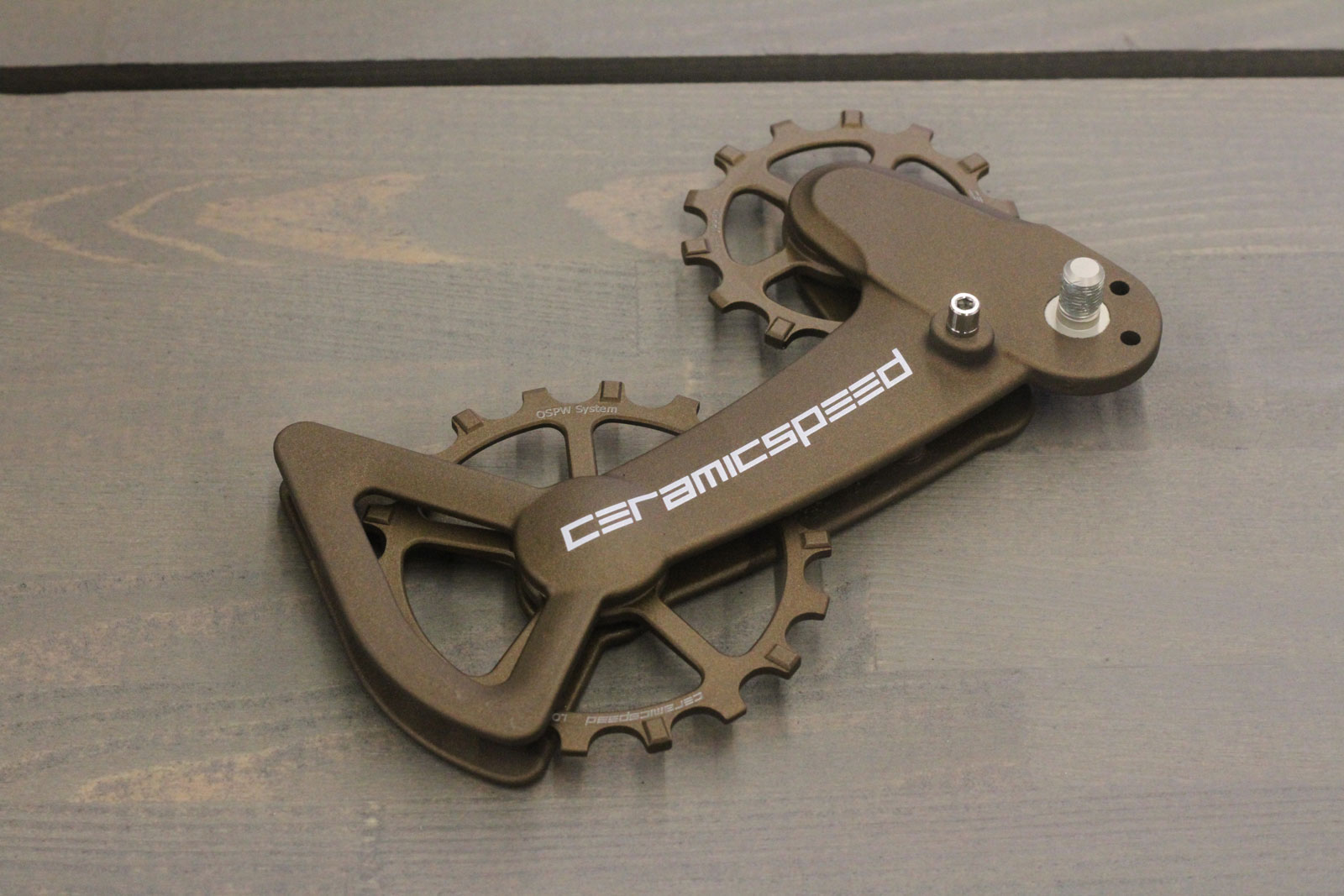 For MTB, CeramicSpeed brought along their limited edition Cerakote OSPW X for SRAM Eagle and Eagle AXS, as well as Shimano XT and XTR derailleurs. We are told they spent a long time testing Cerakotes from different providers, to be sure they opted for the most durable one. The Cerakote is said to be 10-15% more durable than a regular anodized finish. 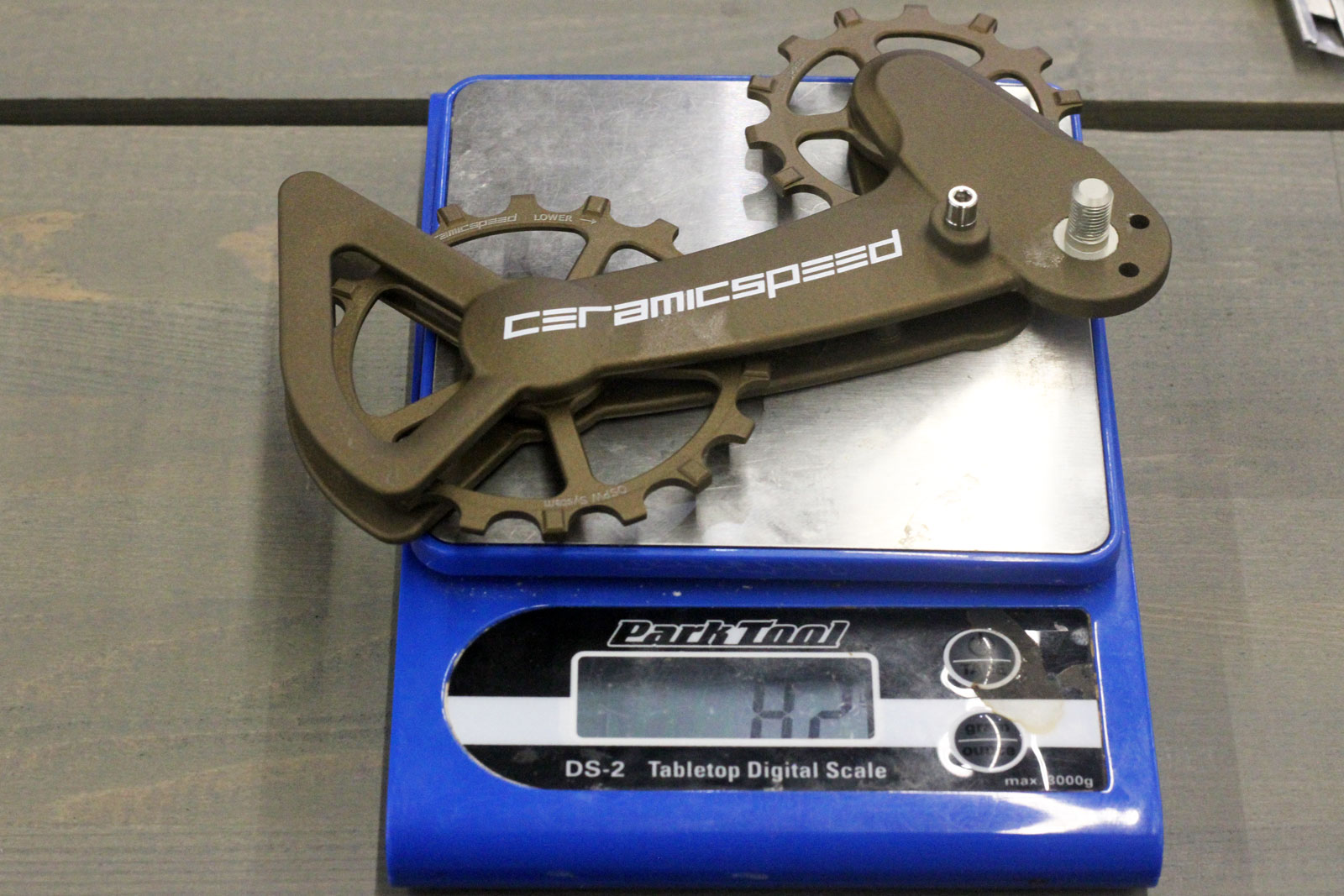 These are available in Gun Metal, Military Olive and Bronze Cerakote finishes. Only 100 of each color, for each derailleur, will be available. Ever. Pick one up for 749 €. 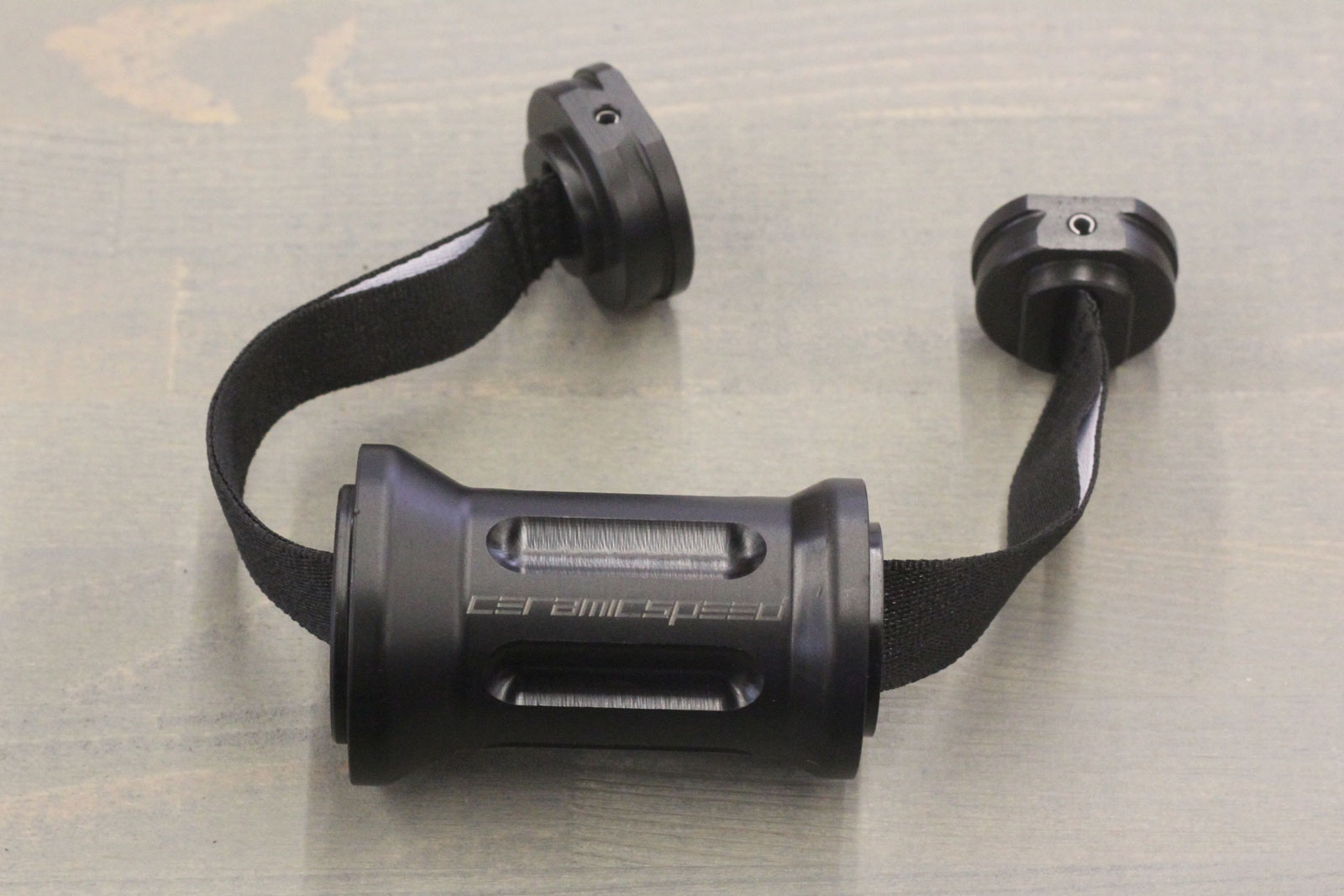 We were also shown this little number; a special tool for removing the dust cap on bottom brackets. It basically makes it easy to pop the dust cover off without bending or breaking it, providing access to the ball bearings themselves, allowing a mechanic to clean out contaminants and re-grease the bearing to improve the service life of the bottom bracket.

The plastic ends of the tool are shaped to make it super easy to get the tool into the opening. From there, you can position the outer surface against the inside face of the dust cover and simply yank it out. It works for 24mm and 30mm bottom brackets. The one retails at 39 €. A CeramicSpeed spokesperson told us this was a shocking amount of money to build, simply because it has to be so precise. They also said that, when using it on a mountain bike bottom bracket with Boost spacing, you need quite long fingers to be able to get it through. 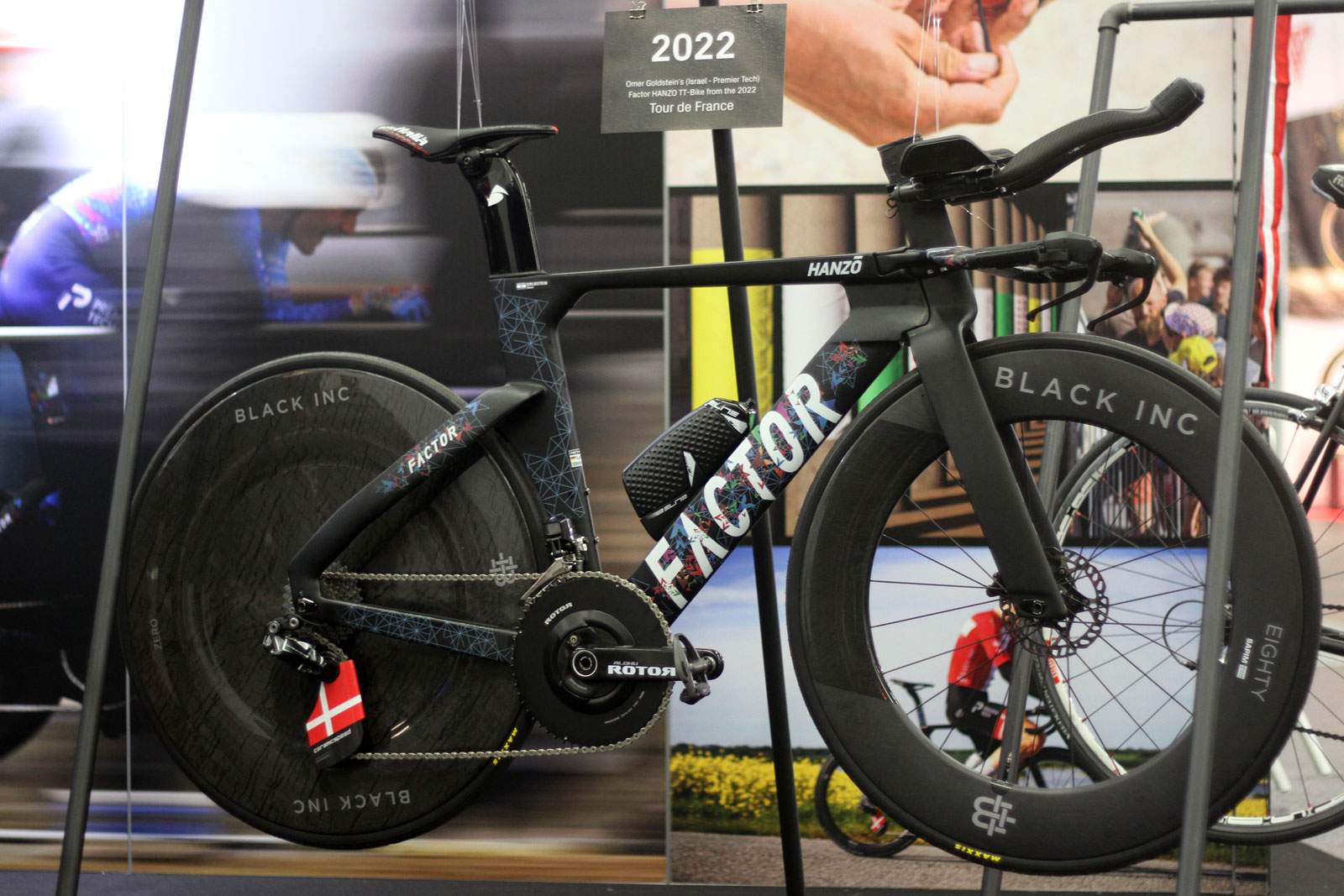 Finally, we couldn’t walk away without getting a shot of Omer Goldstein’s 2022 Factor Hanzo Time Trial Bike. Along with an absolute dinner plate of a chainring from Rotor, and the Black Inc Zero Disc Wheel, it was also sporting CeramicSpeed’s OSPW Aero derailleur upgrade, developed with renowned aerodynamics expert, Simon Smart, of Drag2Zero. 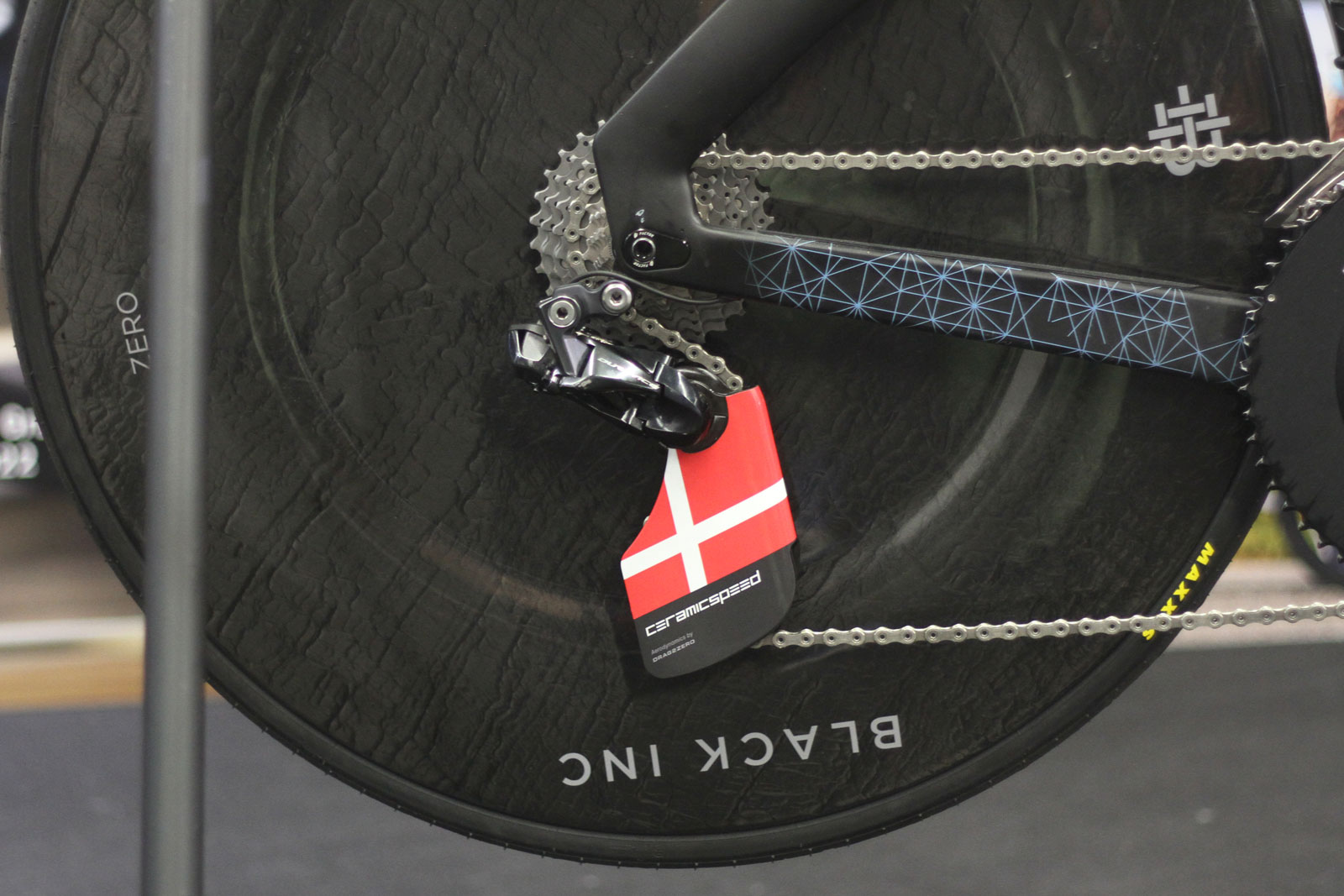