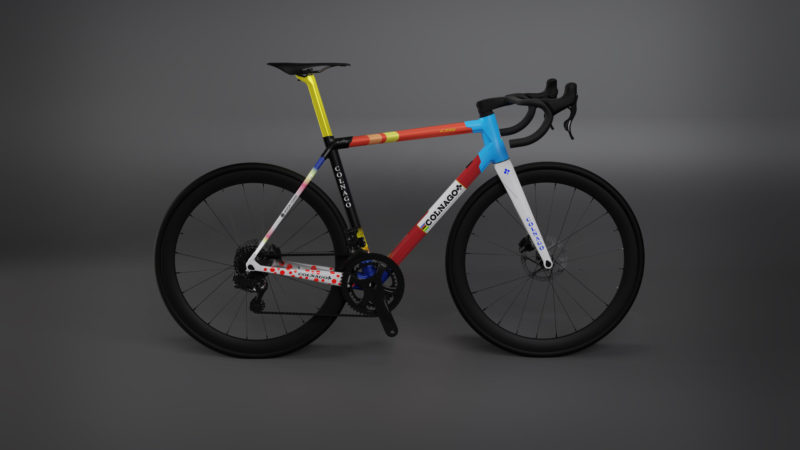 Zwift. Bitcoin. Dogecoin. Is anything real any more? We live in a confusing time where digital assets are becoming interchangeable with physical cash, which brings us to the NFT. That’s non-fungible token for those not up on their Nyan Cat news (which just sold for $590,000).

What is an NFT? It’s basically a completely unique digital item that is part of the blockchain. That’s the tech behind cryptocurrencies like Ethereum and bitcoin, but NFTs get additional digital information that sets them apart from digital currencies. That’s what makes them unique, and there for non-fungible (can’t be replaced with something else of equal value). 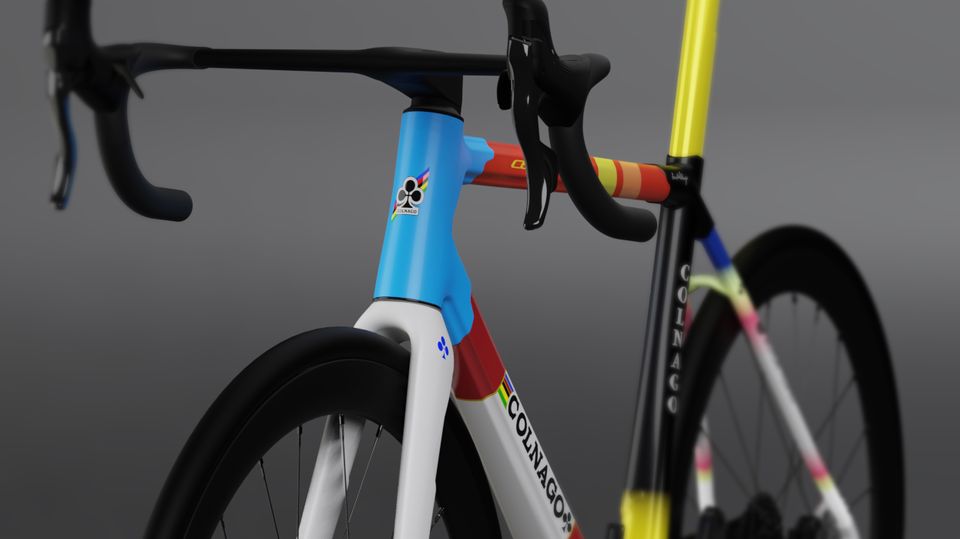 Honestly, it’s a fairly confusing realm of one-off digital artworks and pseudo-celebrities selling short video clips and anything else they can think of to the highest bidder. As crazy as it all sounds, there are millions to be made from NFTs with the right piece (Beeple’s “Everyday: The First 5,000 Days” recently sold for an astounding $69 million). Keep in mind that this is a digital image, just like the one you can view online (for free). Only, if you pay $69 million you get to claim ownership of the image.

As if high end bikes weren’t already exclusive enough, now Colnago is joining the digital craze with an NFT of their own that just sold for more than an actual bike. Called the “C64 NFT”, the digital artwork combines details from “all 67 years of historic Colnago moments into a unique NTF bike.”

Colnago goes on to say that the image is “Minted on the blockchain as a 1-of-1, this incredible NFT is becoming part of Colnago history and will never be duplicated. Based on Blockchain technology, Colnago NFT artwork is guaranteed to be one-of-a-kind and publicly verifiable on a Blockchain’s distributed ledger. The Colnago C64 NFT is made using a C64 as the base, a carbon fiber frame made in Italy. The design was created by melting together the liveries of eight Colnago’s key models, which include the Concept, the first bike with a carbon frame and with an integrated shifting system, the Bititan bike with which Abraham Olano won the World Championship in 1995, the C59 the bike with which Anthony Charteau won the Polka Dot jersey at the 2010 Tour de France, the C35 TTT that won the Team Time Trial World Championship 100km in 1994, Giuseppe Saronni’s Super Profil, Tony Rominger’s Hour Record bike, Tadej Pogačar’s V3Rs – the latest Tour de France winner – and the C40 icon of Team Mapei.” 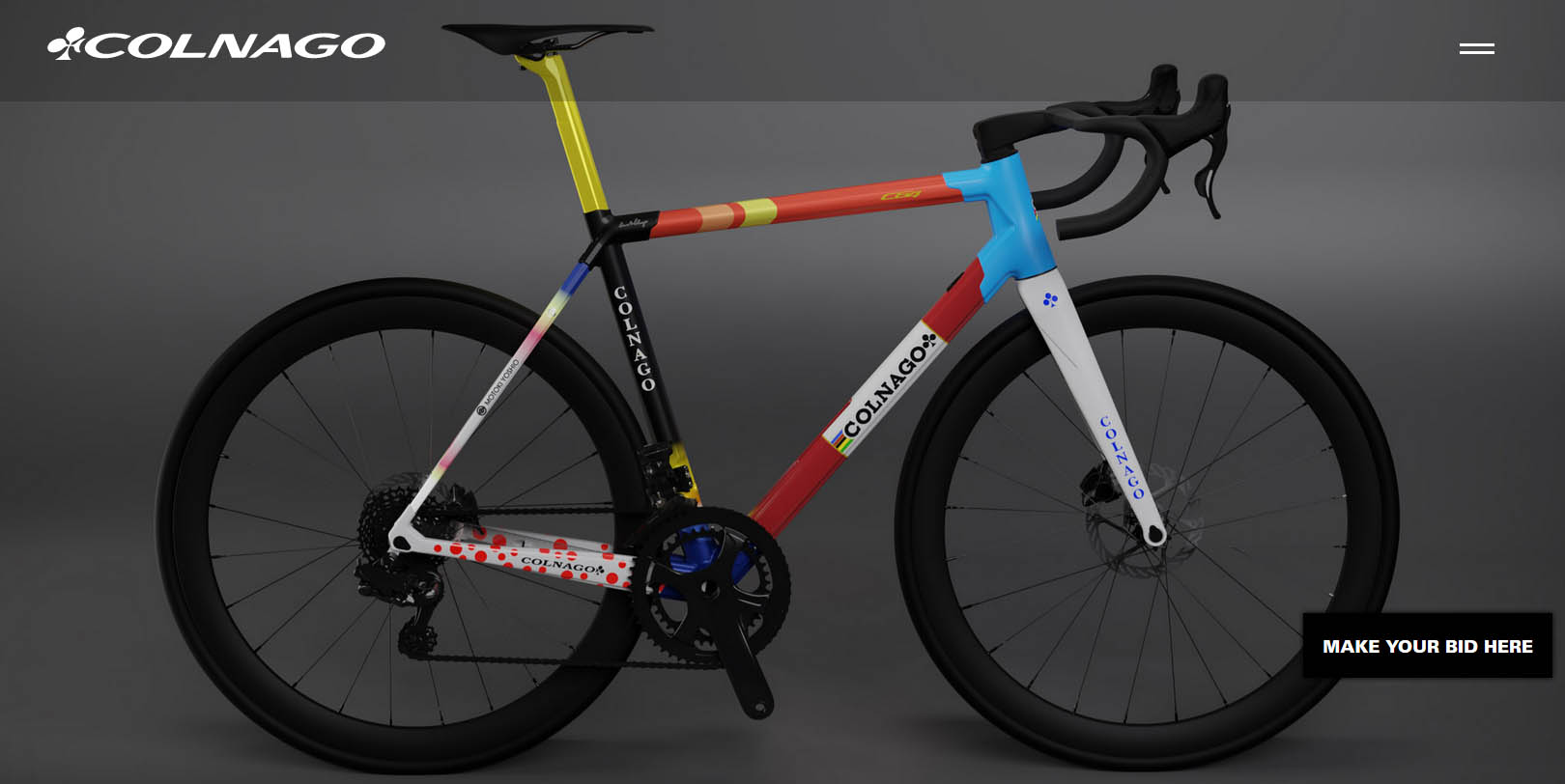 *Updated on 5/28 to reflect the sale price

For sure. Its a sharp looking bike!

I own a custom paint shop, my assistant and I were talking about doing just that.

I came on here expecting some world class snark. I mean, this is the most transparent and vulgar money grab in cycling that I’ve seen in a long time, and that’s saying something. I’d love to learn that someone won the auction and then said, “wait a second, 5K for a picture? A PICTURE?”. Then stiffed them.

It’s not a picture, it is a complete digital bike

Anyone remember the commercials for Manufacturer’s Hanover back in the 70s and 80s when they drove around in that car that was an amalgamation of like 16 different car brands?

Must take into consideration that Colnago is basically the Godfather of the ‘Cycling Is The New Golf’ movement that spawned in the early-mid 90’s. Thanks to far more advanced aerospace grade materials to make bikes from instead of the simple steel tubes used for generations, there was a paradigm shift in the demographic during that time. We went from a very blue collar working class sport to a very white collar sport to people with endless disposable income almost in an instant.

Is this absurd to most viewers… yes.

Is it a surprise, considering the trajectory of who populated the high end cycling demographic over the years… not really.

Mark
Reply to  K-Pop is dangerous to your health

My vote is Pinarello.

K-Pop is dangerous to your health
Reply to  Mark

Colnago was building carbon frames 17 years before Pinarello figured it out.

barf, NFTs and cryptocurrencies are an ecological disaster. Shame on any outdoor sports company that pedals in that trash

I mean, you can’t get a real bike right now so what’s the difference?