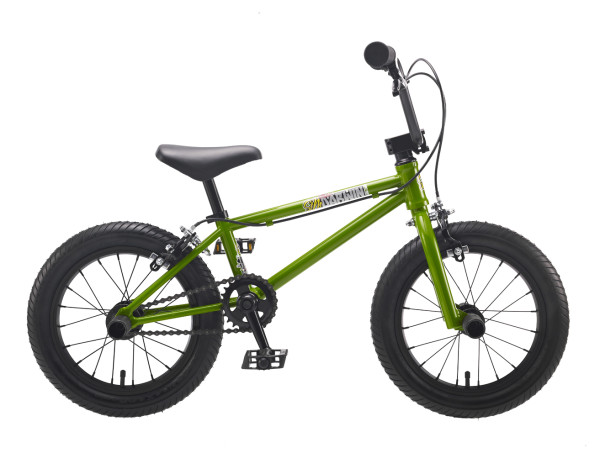 Just when I was starting to get comfortable with all the different wheelsize religions, a little brand named Darwin had to tip the boat. Just like the gap for adults between 26″ and 29″ wheels was crying out for a mid size solution, the deeply unsaturated children’s market has a new savior. If your future Gwinny is too tall for a 12″ and to small for a 16″, you can now procure a 14″ BMX bike to prepare them for their pursuit of the rainbow stripes.

Jokes aside, the Darwin appears to be a well thought out kids bike. The company claims to have spent 6 months extensively testing the bike under numerous kid athletes to ensure the best balance, and no expense has been spared in the pursuit of ultimate playground cred. The Mini Darwin 14″ has  an integrated headset, cassette hub, 4 alloy pegs, and a 1pc seat/seatpost combo. They’ve also optimized the gearing to work with the short kid approved crank arms they’ve spec’d. 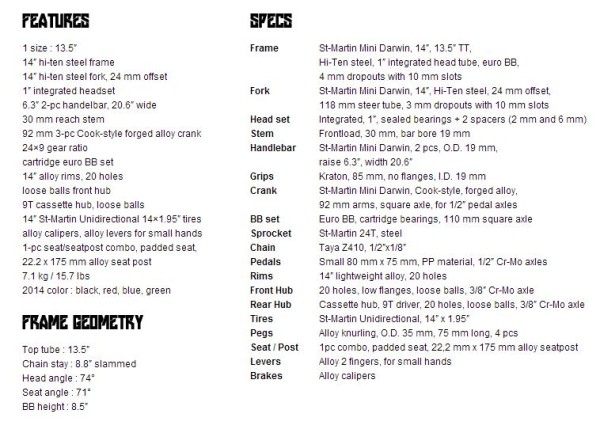 After looking over the spec’s, we have to say this little ride looks pretty sweet.  No word on pricing or weight yet, but the well equipped whip should be available in Japan come March and in Switzerland and France this April.

Another dead wheel size brought back to life. Maybe you’ll be able to get more tires for some old scooters now.

Nothing new. 14’ers have been around for a long time.

Aren’t 14″ and 18″ the size big box stores use from some reason? What’s the reasoning?

foolio, you’re thinking of 14″C, the box store size. These are 14″B, the old Chilean size for wheelbarrows.

But can it enduro?

Ok I have to call this out. Introducing a new nonstandard wheel size for kids bikes are completely pointless. My son outgrew his 12″ in 2 years, his 16″ in another 2 years, and now he’s on his 18″. Which begs the question, why would anyone buy a kids bike that only lasts a year?