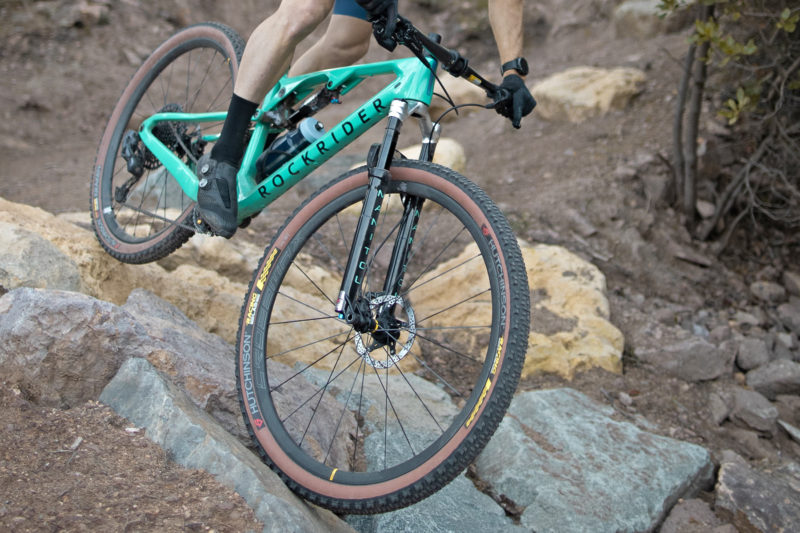 When we check out the pro bikes on the start lines at the XC World Cup, we don’t often find anything nearly as affordable as Decathlon’s budget Rockrider mountain bikes. Yet now, the French bike brand is headlining a new UCI MTB Rockrider Racing Team of young but proven riders. And their team launch has revealed two all-new prototype carbon mountain bikes that may be coming to a big box near you soon! 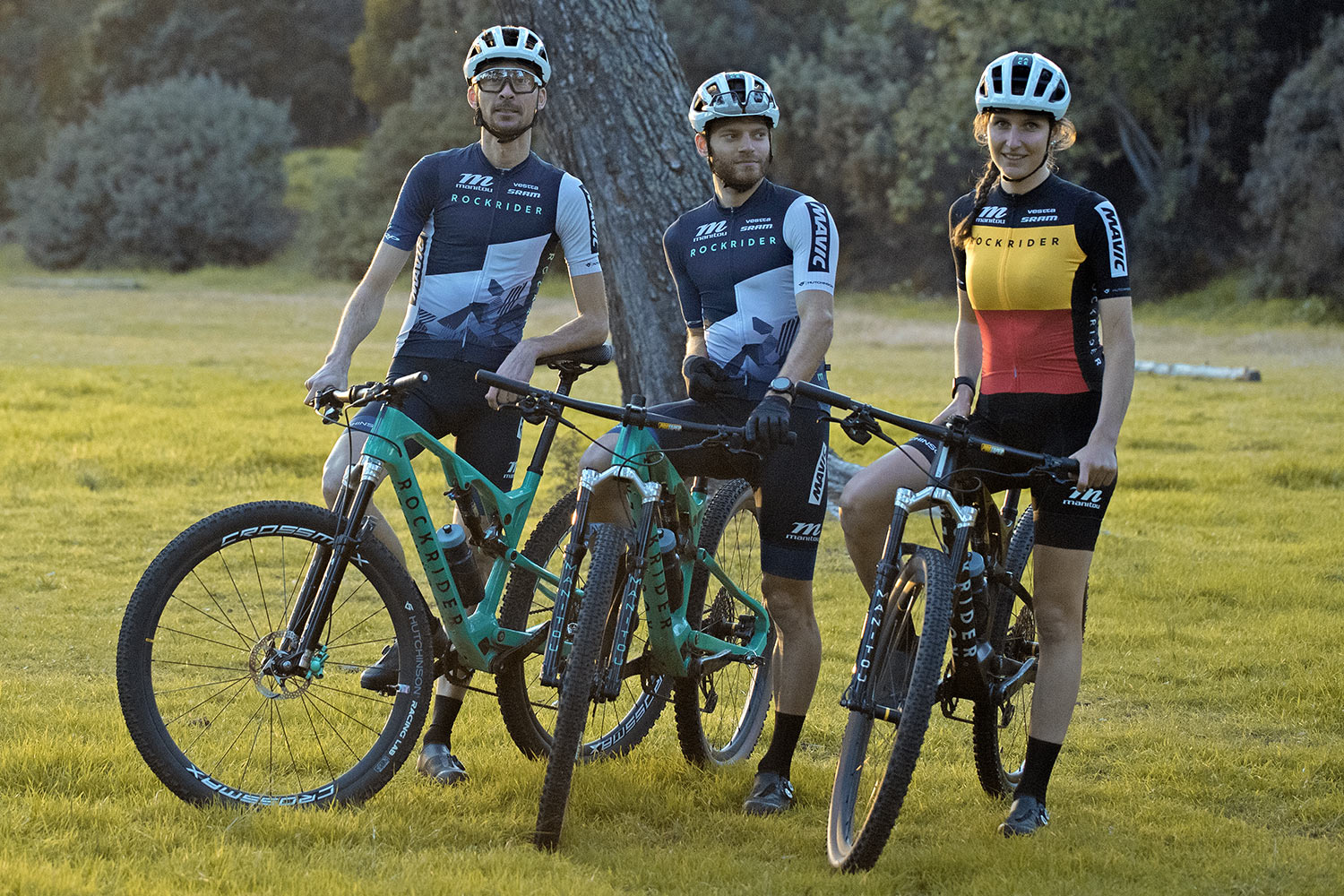 The all-new Rockrider Racing Team is described as a “union of French brands” pairing Decathlon with Hutchinson tires, Mavic wheels, and Look pedals – with plans to use the expertise of the new team to fuel “homegrown product development”. 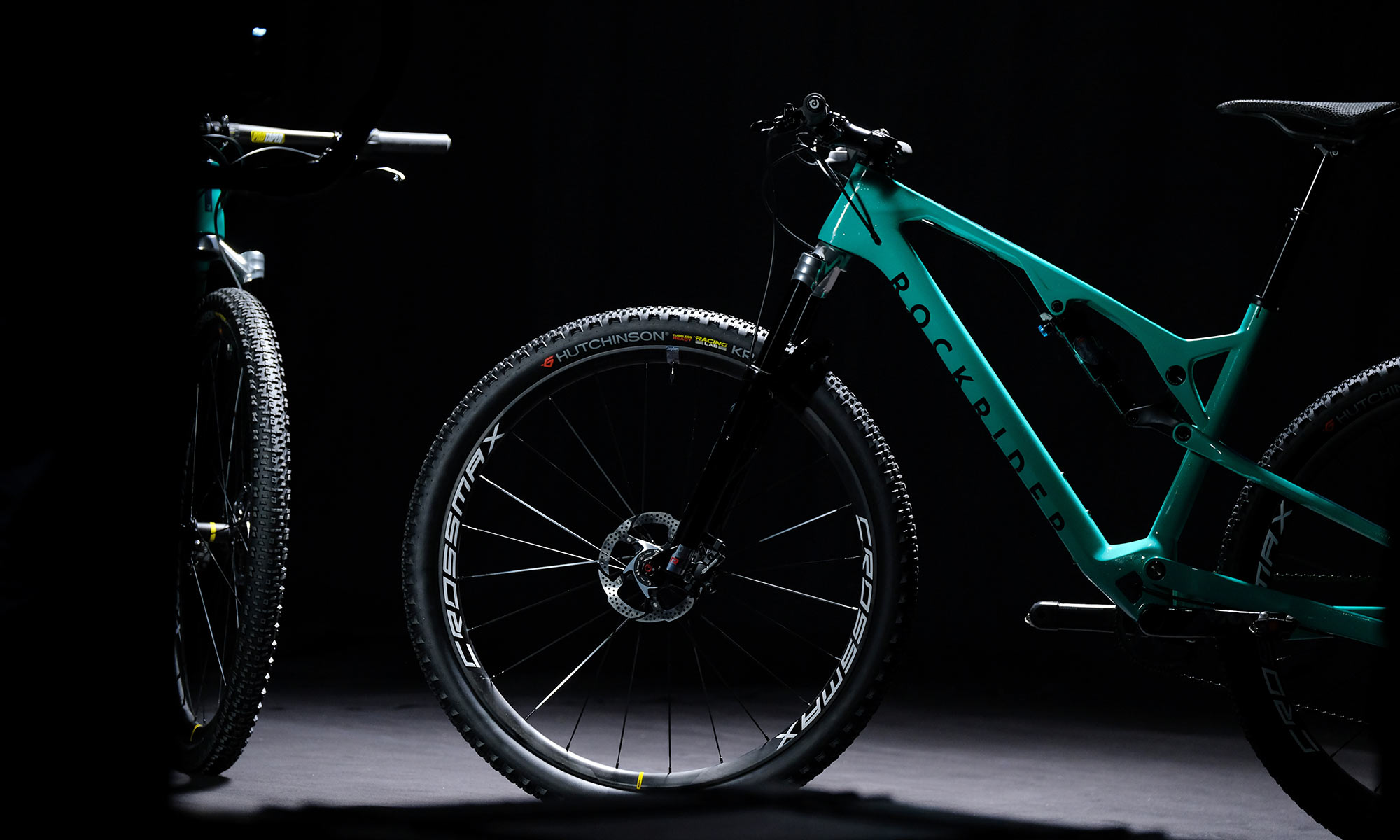 Already with their top carbon hardtail that sells for 1900€ complete and carbon full-suspension bike for just 2300€, it’s hard to think of any more affordable race-ready value in a World Cup XC bike.

Now both of the new team’s race bikes are prototypes or at least pre-production bikes that update what you can buy today from your neighborhood sporting goods retailer. But the differences don’t look big enough to push these new models too far beyond the current bikes’ affordability. 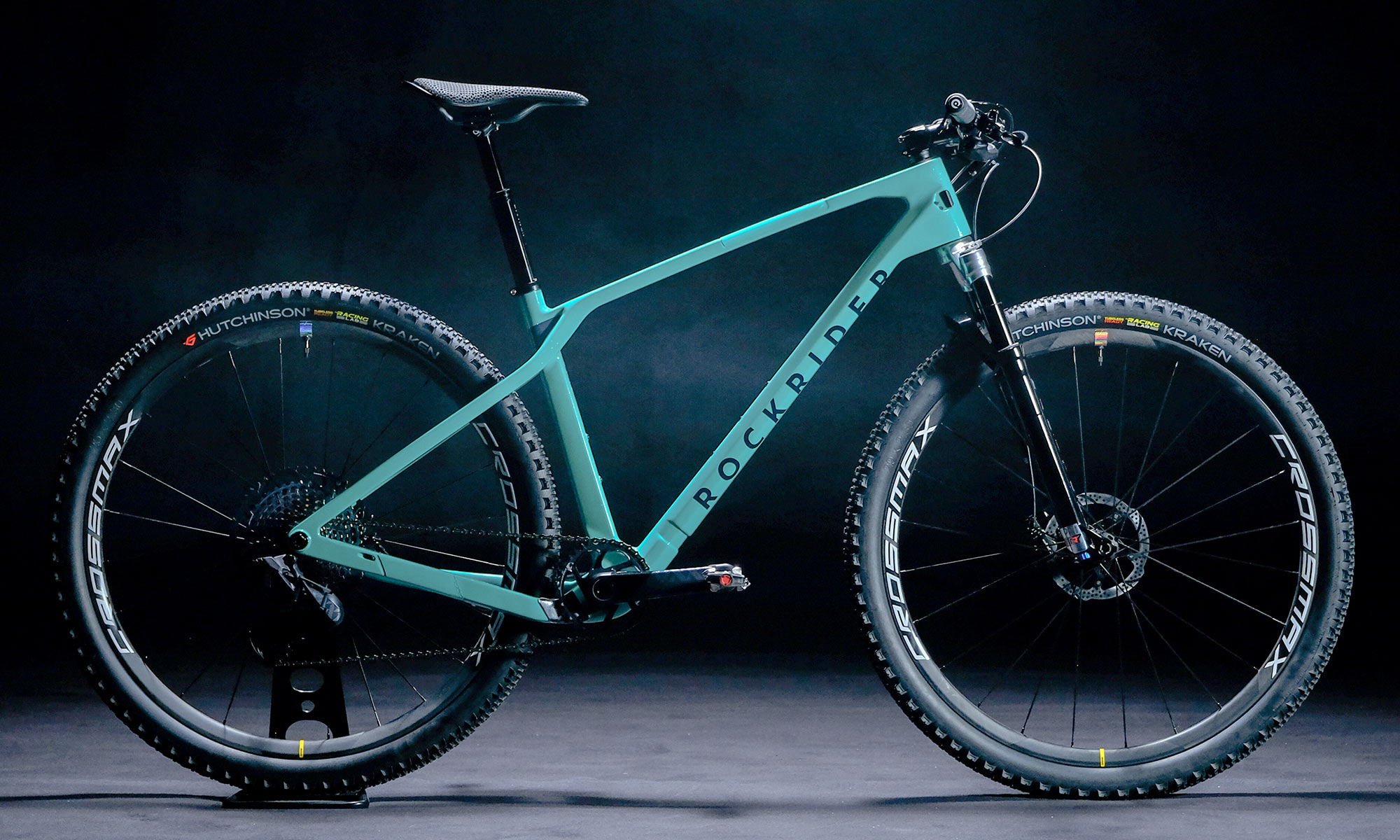 Neither Decathlon nor their Rockrider team have divulged much info on these new XC bikes, but there are plenty of details we can suss out.

The XC900 hardtail is an all-new carbon frame, with boxier tube shapes throughout (more in line with their full-suspension bike’s design language), a semi-dropped seatstay configuration, and several unique stepped-down segments molded into the frame. 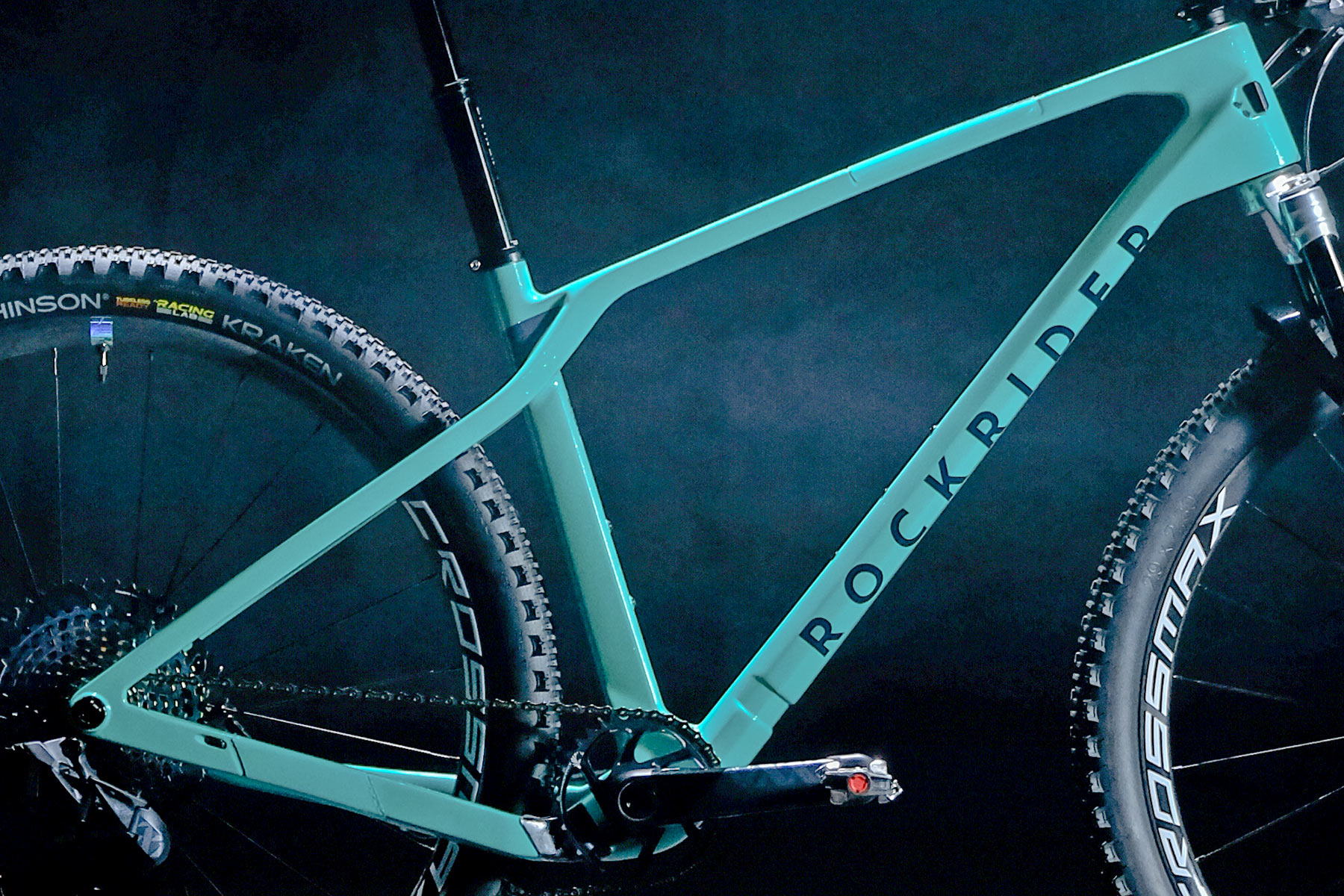 Those odd molded steps are there to allow for a more flush finish once the factory toptube guard (to protect against brake levers damaging the frame in a crash), an integrated chainstay protector, and probably a downtube protector above the bottom bracket? That last one could alternatively be a way to secure a spare tube or tools low in the frame with a simple strap?

We’ll have to wait for production bikes to be sure. 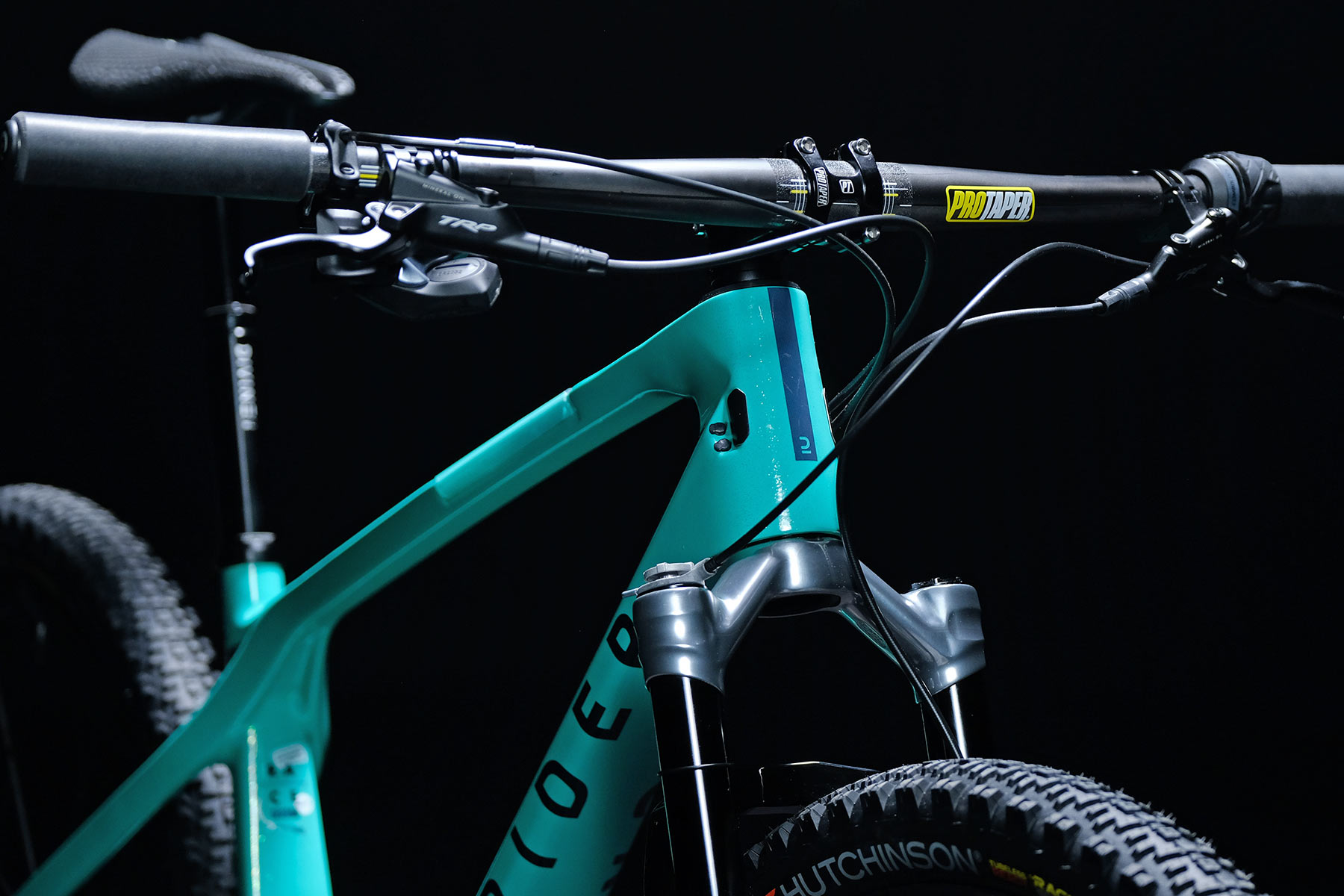 The new hardtail features conventional internal cable routing ports on either side of the headtube, although the team uses few of them with a SRAM XX1 AXS drivetrain. Up front the team’s hardtails are fitted with 100mm Manitou R7 Pro forks, launched back in mid-2020.

The new bike is updated to a larger diameter seatpost (30.9/31.6) to better fit a stealth dropper post. 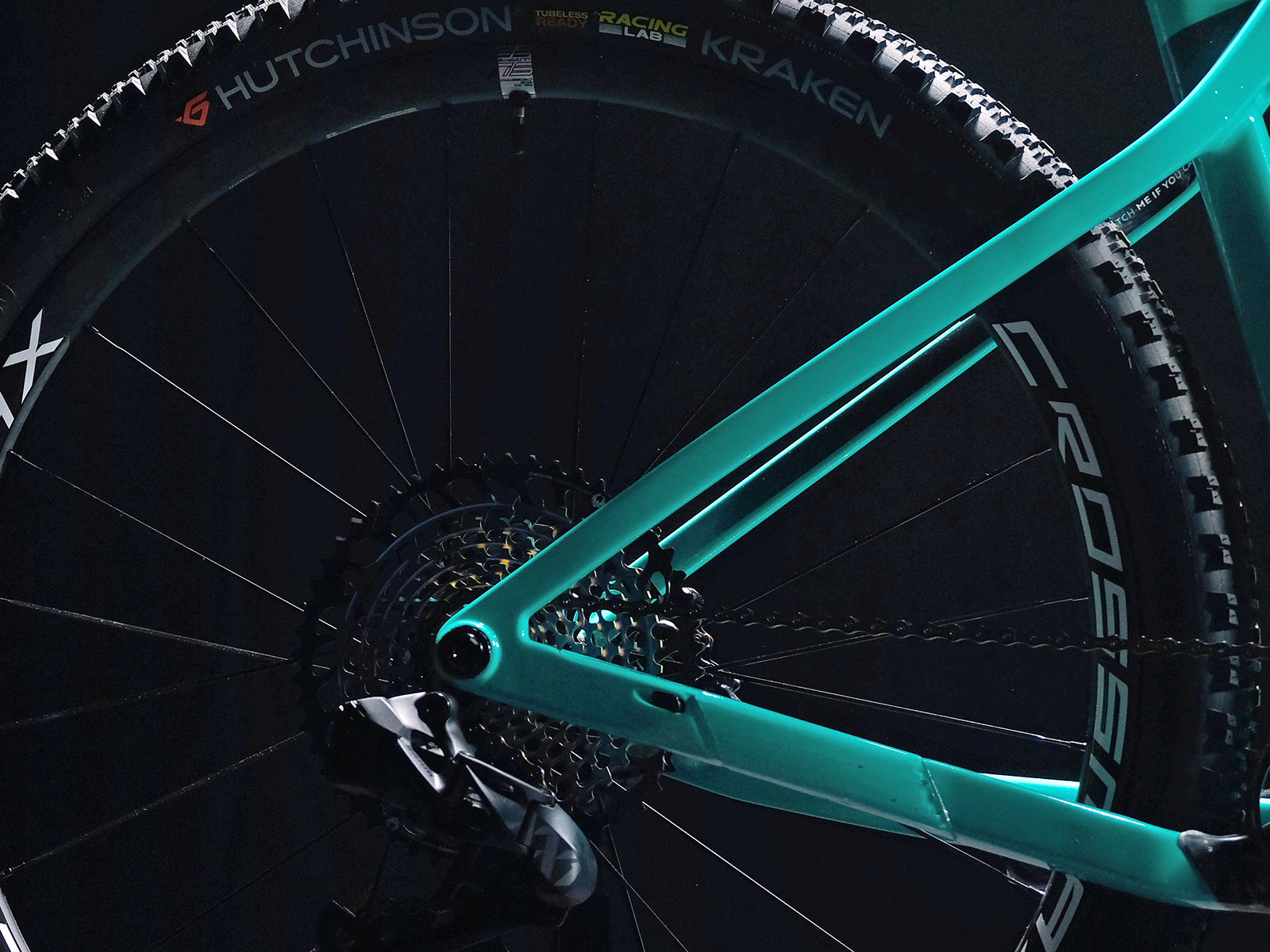 Curiously, stretching the seatstays through to meet the toptube is usually a move to introduce more vertical flex into the rear end. But this hardtail still has tall boxy stays, and they still appear to fully wrap the seattube, so it’s unclear if this would add much comfort for the rider?

Out back it’s pretty standard with a Boost thru-axle. And we can see the asymmetric chainstay layout that gives room for a post mount disc brake on one side, and a mix of tire & chainring clearance on the other. 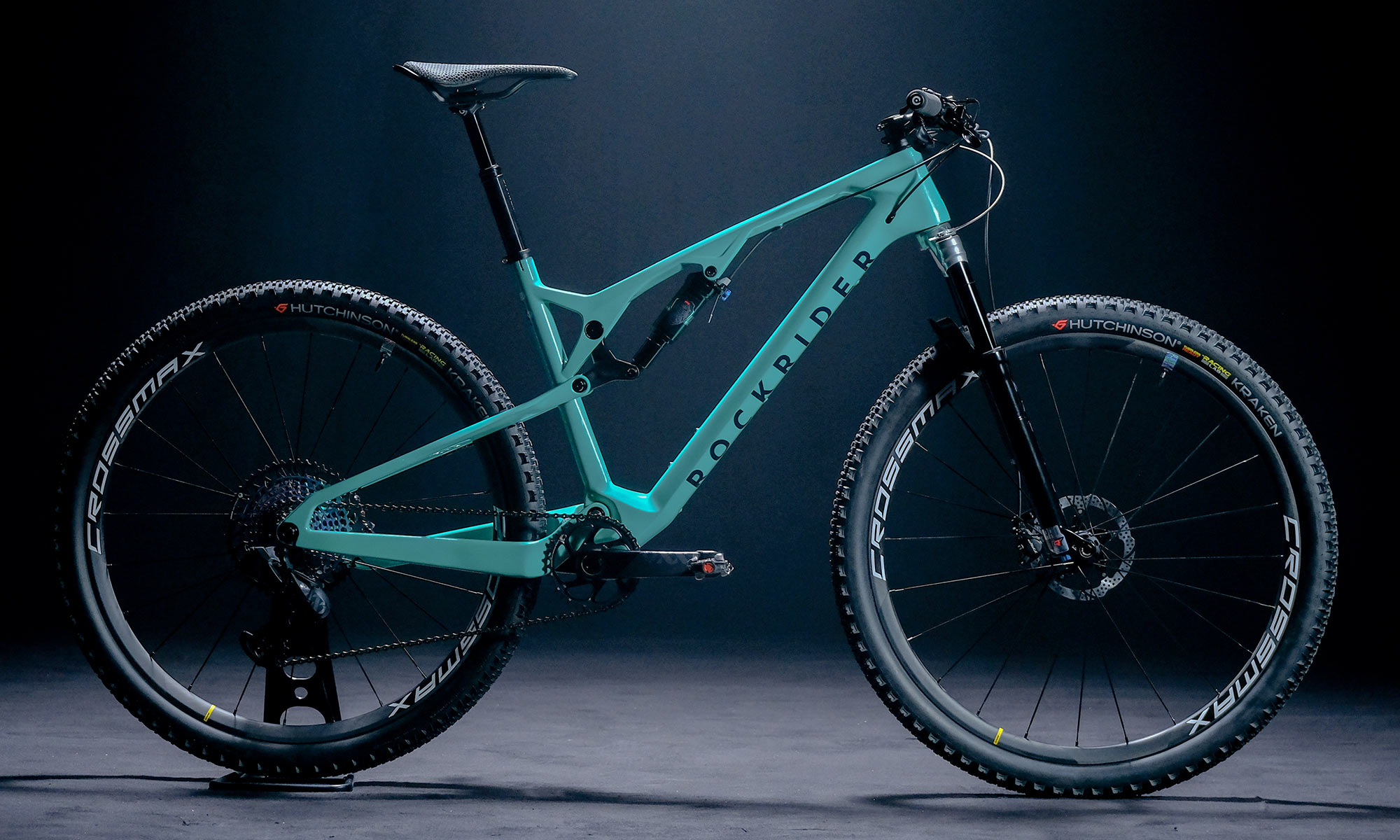 We have a bit better look at the new XC 900S full-suspension frame. Unlike the hardtail, this one isn’t quite all-new, but rather adds a completely reworked rear end and suspension design onto an existing front triangle. 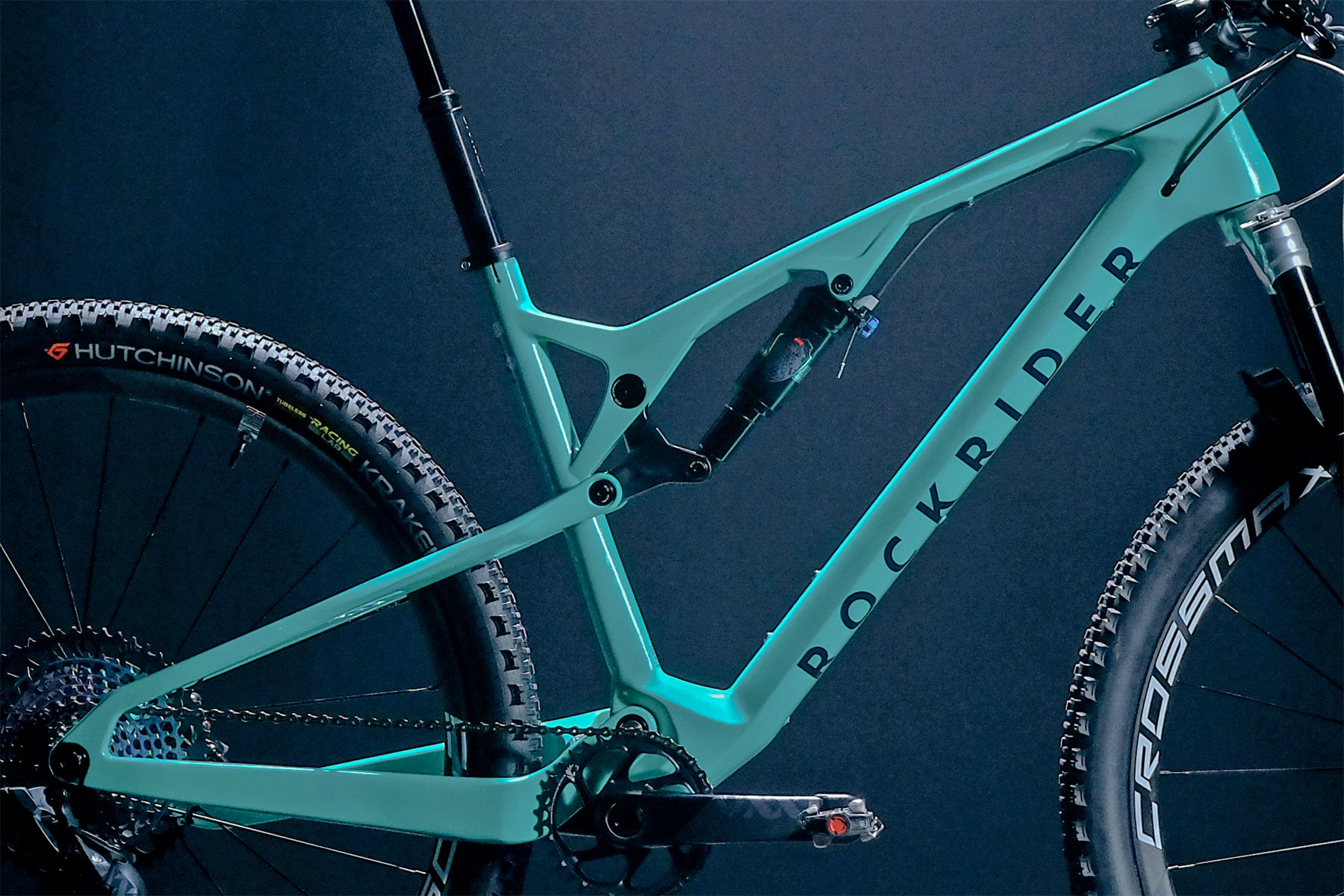 The new one-piece carbon rear triangle will rely on seatstay flex to allow the linkage to drive the Manitou Mara rear shock. (The current Rockrider carbon fully has a similar linkage-driven single pivot using an alloy rear end with a seatstay pivot.) 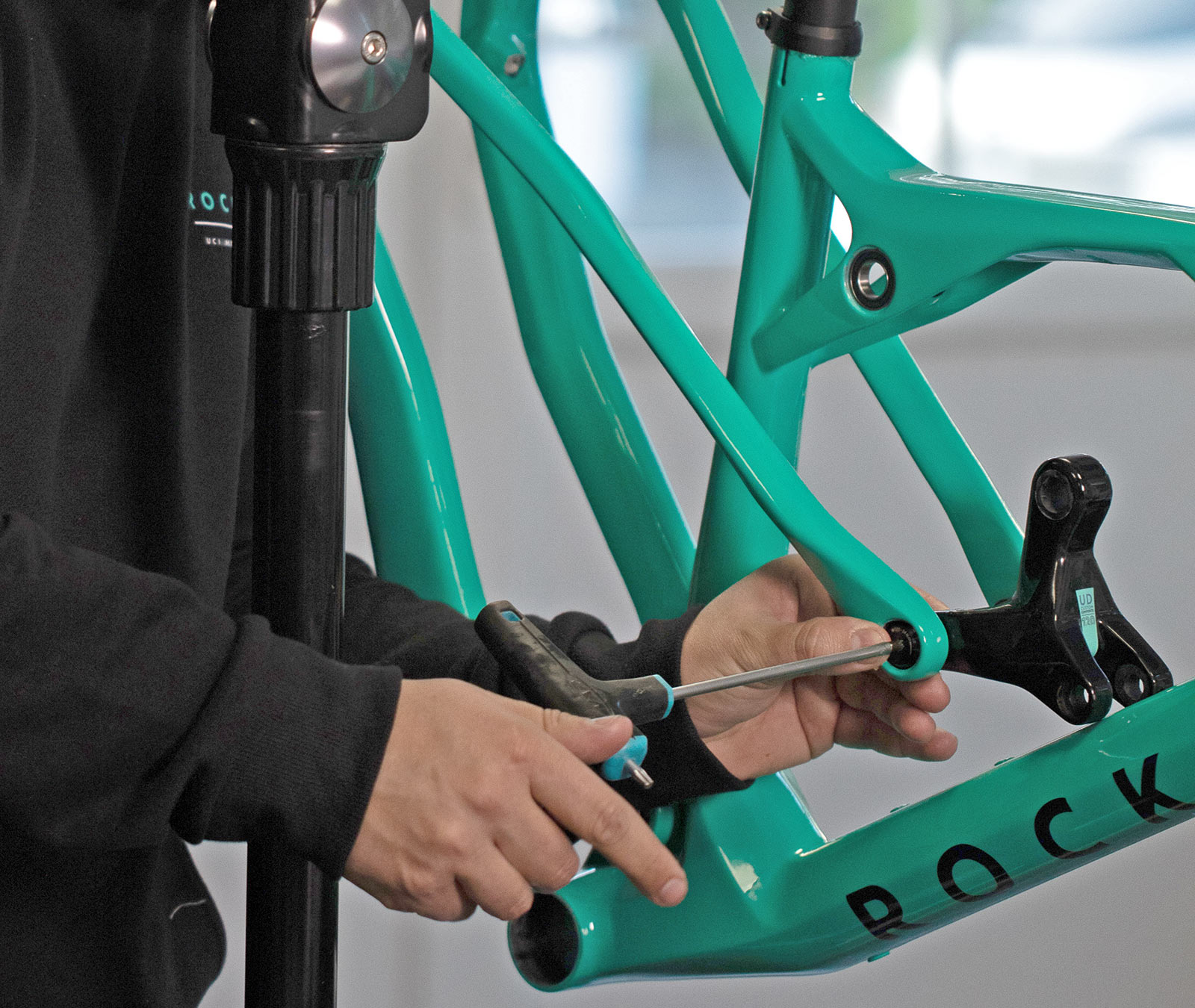 The new linkage is also now full UD carbon with a label on it confirming the new race bike will still offer 120mm of rear wheel travel – paired with a 120mm Manitou R7 Pro fork. 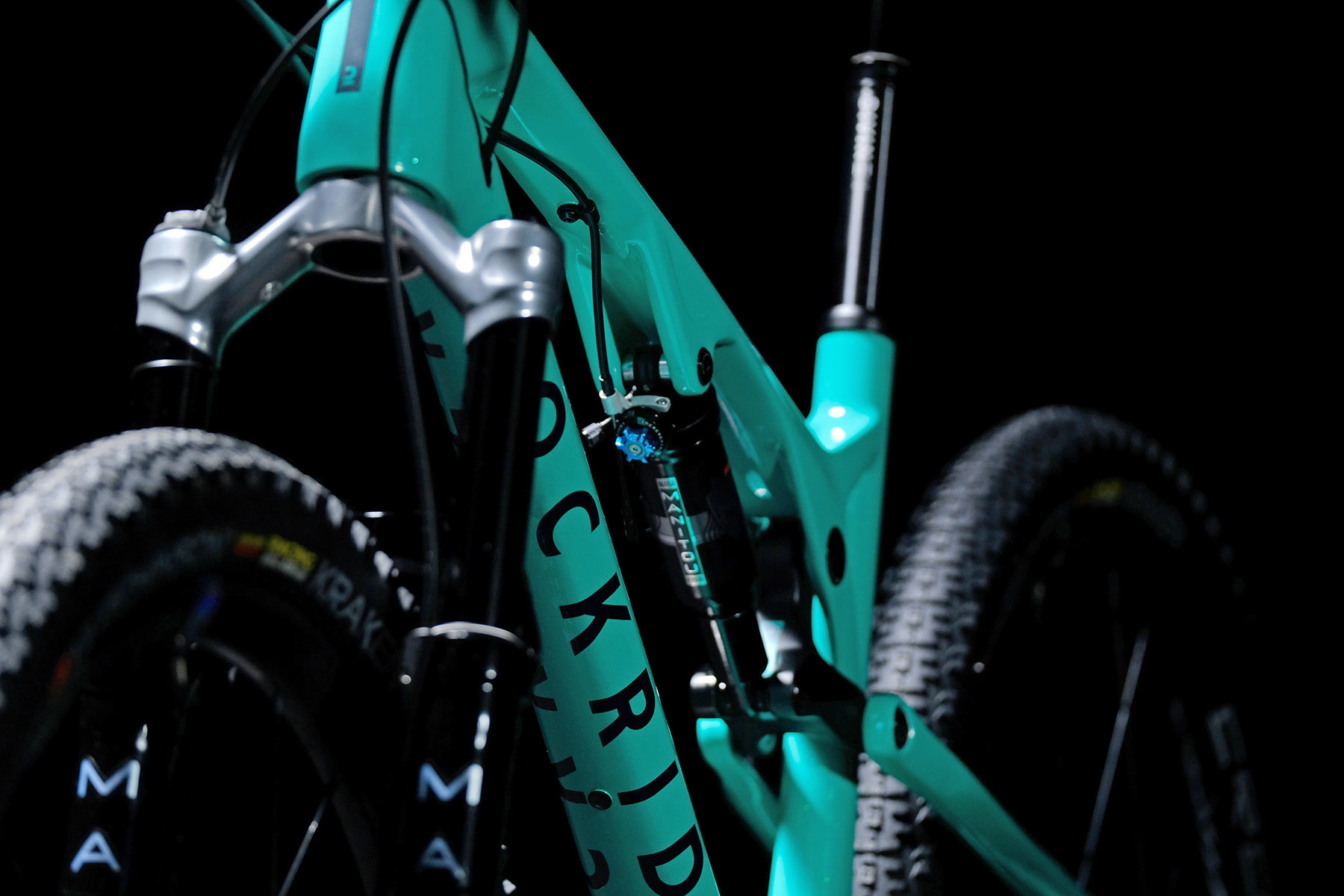 Further confirming that the front triangle is unchanged, team bikes route the rear brake & dropper post internally, but the rear shock lockout cable stays external, bolted to braze-ons under the toptube. Similar mounts on the downtube are used for rear brake routing on the current carbon/alloy frame to prevent the need to route hydraulics inside the big box store bikes, presumably for less difficult assembly. 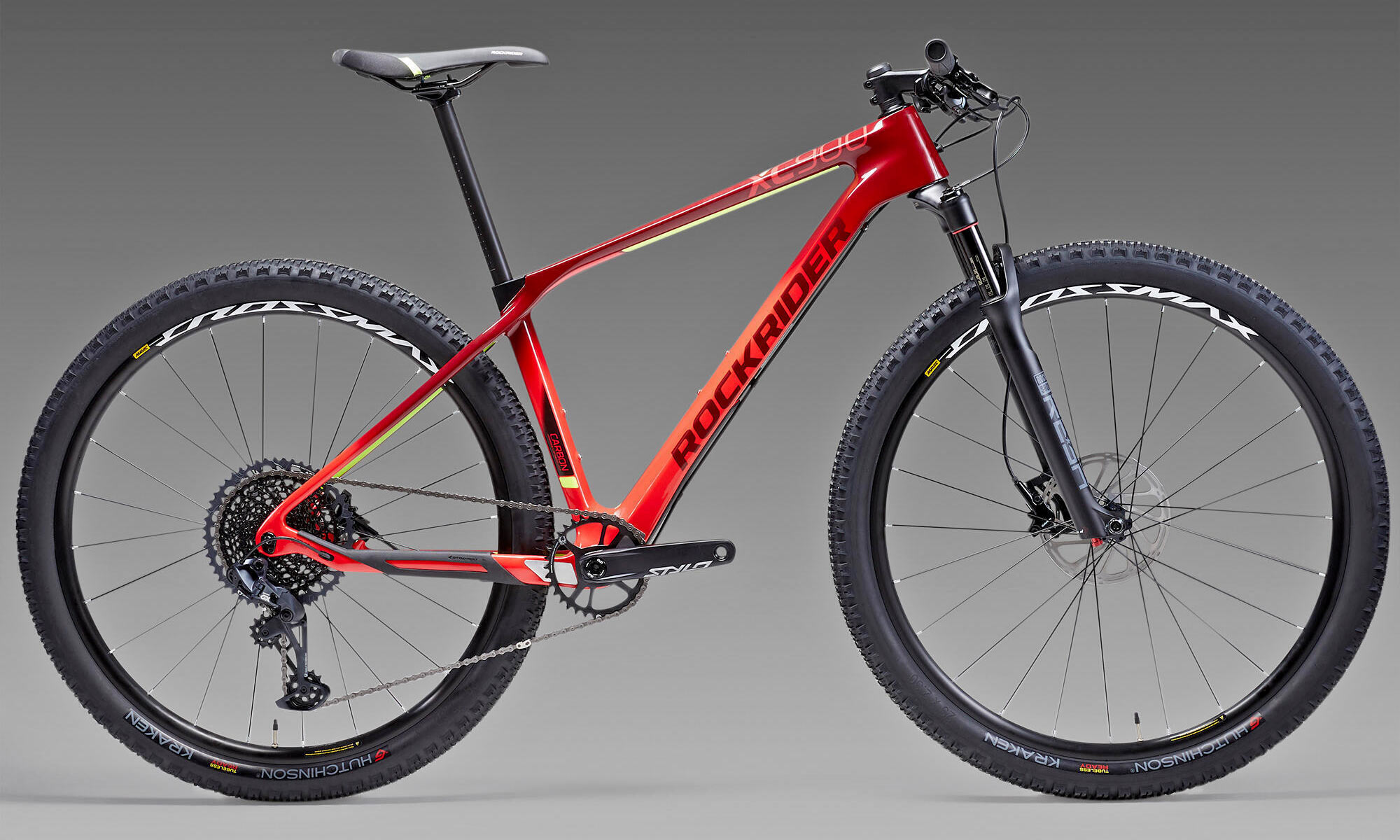 What do you get if you bike an off-the-shelf carbon XC bike from big box sporting goods retailer Decathlon?

The $2500 / 1900€ carbon Rockrider XC 900 cross-country hardtail is a completely different frame that the team race bikes. 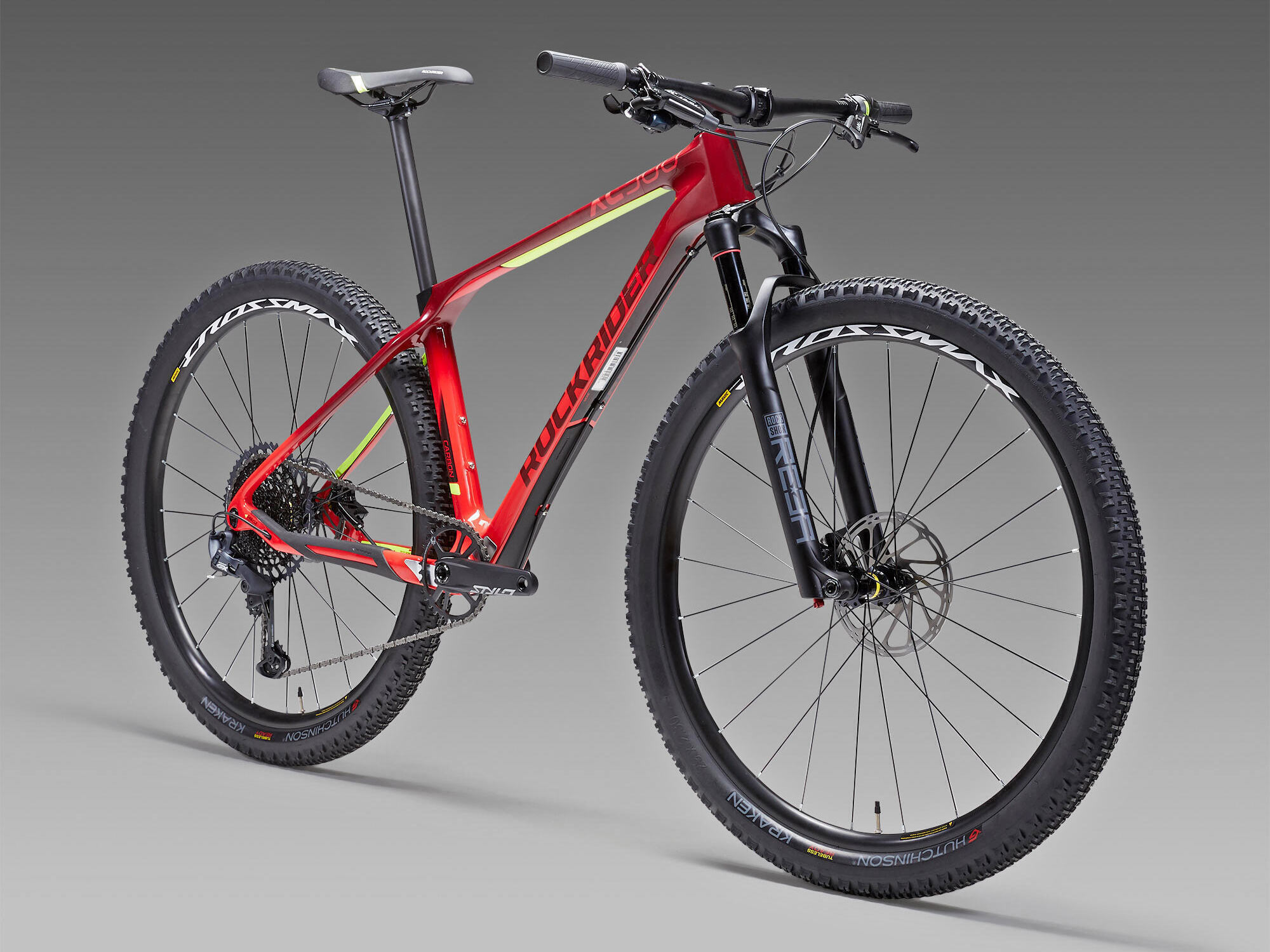 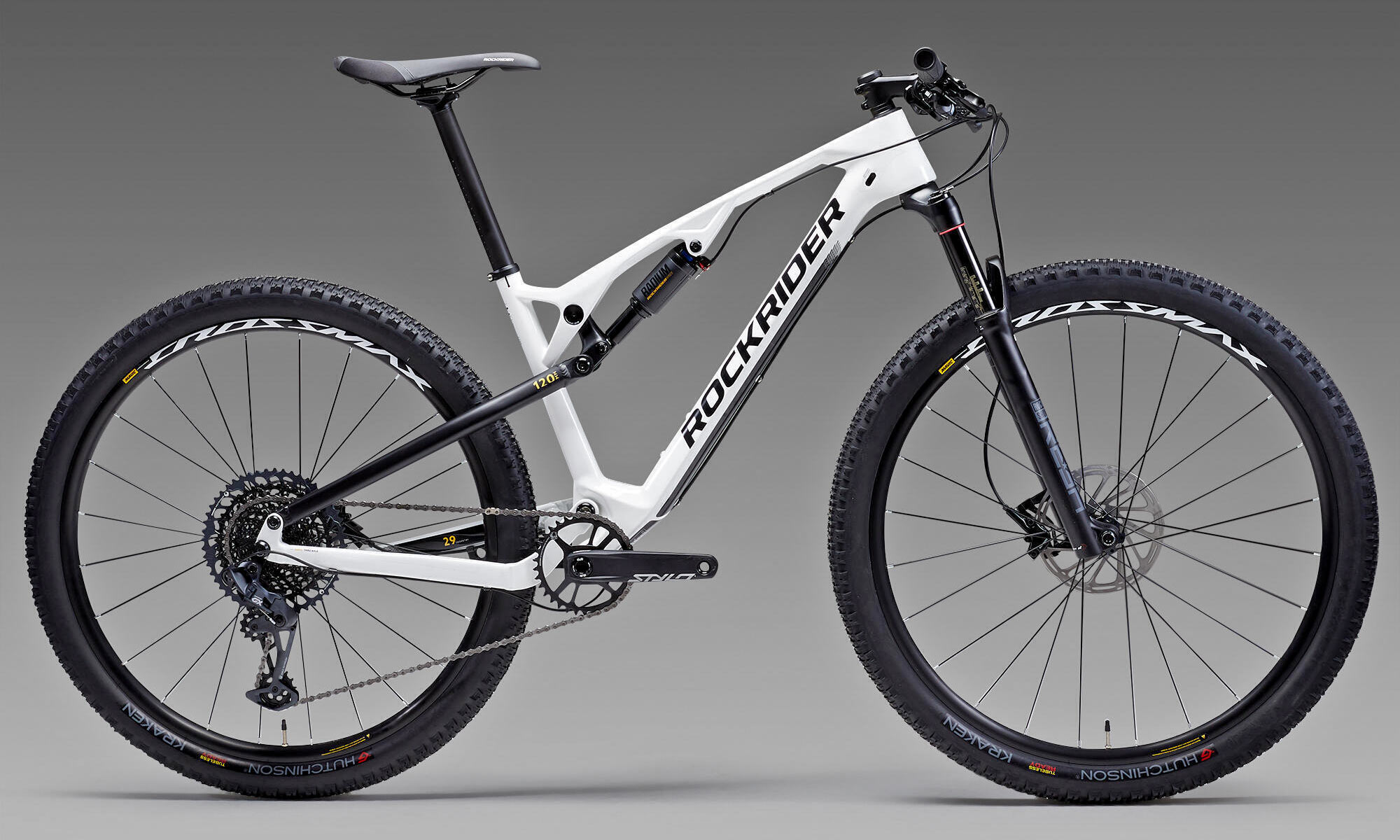 The 2300€ Rockrider XC 900 S marathon cross-country full-suspension bike you can buy from Decathlon now is NOT quite the same as the pro’s model. Perhaps that race bike will be coming soon to a big box shop near you. The commercially available bike appears to possibly share the same front triangle, but has a different aluminum rear end with a seatstay pivot just above the dropout and a different shock linkage. 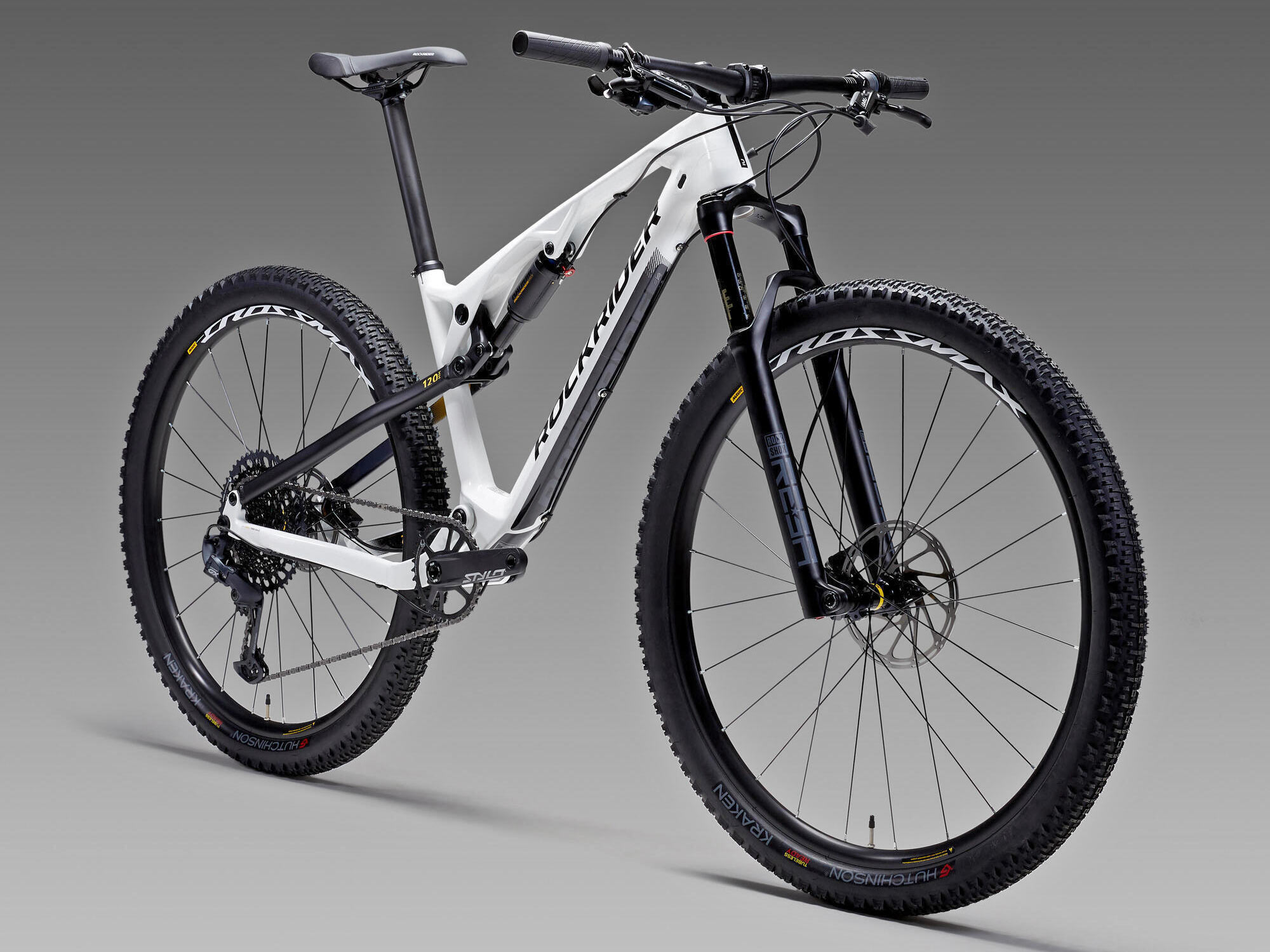 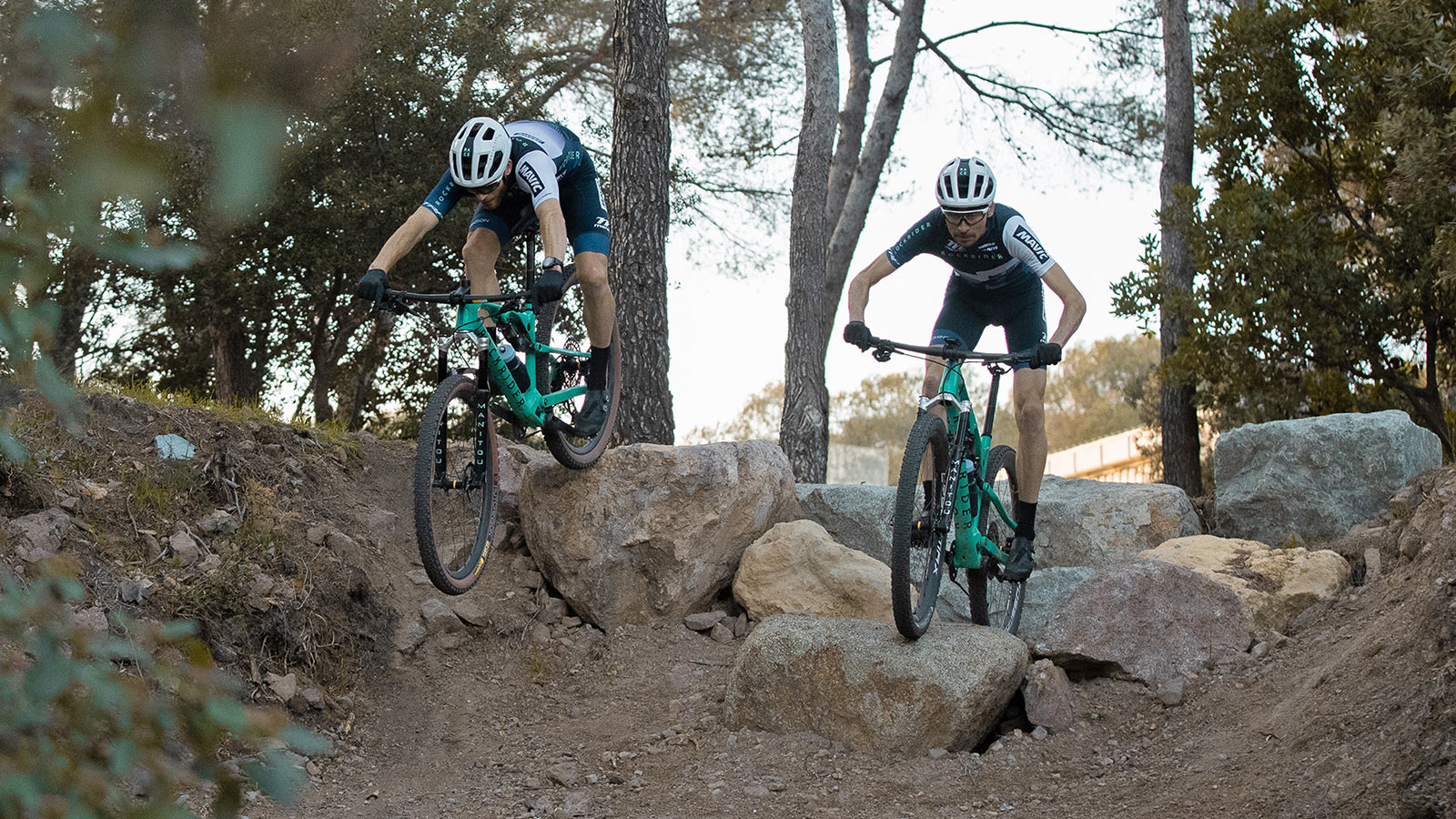 While the current full-suspension bike is available in Europe, it is not offered in the US. Plus, Decathlon has also just announced that they are closing their US retail stores, instead focusing on e-commerce and direct-to-consumer delivery.

We’ll have to wait and see, if or when these new team bikes make it to stores.

That is just a sticker for protection, shoe wrap..

I too buy entry bikes then change out wheels , bars , forks , brakes & groupset so people don’t acuse me of blowing 10K on a bike. nothing new here

I like how they use a similar decal font as Rocky Mountain does. But nice looking bikes I must say.