Cross racing is in full swing here in Europe with us in the middle of the second race weekend of our season long cyclocross test. Spending ever more time off road on skinny tired bikes, I wanted to catch up on one of our Eurobike one-ride-reviews. We had a chance to take out the German-engineered Focus Mares CX on the tacky dirt and gravel trails behind the fairgrounds and through the purpose built mountain bike test track. The terrain was certainly too calm to get a great sense for the enduro bikes we rode, but let us see the snappy acceleration and stable handling of the newest iteration of this disc-brake race bike currently being ridden to podium after podium by American champ Jeremy Powers.

Read on for more of our first impressions, plus a bit more on the bike’s setup.. We were pretty happy on our ride with the updated geometry Focus incorporated in the Mares CX this year. With a slightly higher bottom bracket (it had just gone the other way last year), the bike is still more stable than the twitchy race bike that we had ridden a couple of years back. The bike has a slightly longer front center (read: frame reach) and overall taller headtubes, and also claims almost 400g/0.75lbs of weight savings in the last year. That could be backed up in what I thought of a generally more comfortable feel to the bike. Granted our terrain didn’t have a lot of stutter bumps, but the bike felt snappy and quick to get up the hills and smooth coming down. The lower center of gravity, paired with still sharp 71°/73° head/seat angles on our large test bike, meant the bike still was easy to navigate through tight turns.

One of the standout features on Focus’ top-end cross bike, is the ISCG standard mount for chain retention. Beyond just including mounts, the Mares CX comes with an aluminum plate-style inner chain guide. While it looks pretty beefy, the Focus rep tells us it weighs less than 50g. That may be four times what some braze-on derailleur mounted options may weigh, but getting full retention all the way along the underside of the chainring could be worth it. Anytime I’ve dropped a chain, even with a braze-on guide it took a bit of moving the derailleur and a full pedal stroke to get the chain seated again. This option should prevent that from happening in the first place, even without a clutch rear derailleur. The Mares CX we had a chance to ride was equipped with a mechanical Ultegra drivetrain and the new Shimano RS685 mechanical shift/hydraulic brake levers. This long-awaited component promises to bring Shimano’s top-level disc brakes to market with a much more affordable set of mechanical derailleurs. Any cross racer who has ever trashed a rear derailleur will certainly appreciate the lower cost of a stand alone replacement Ultegra mechanical rear derailleur. We were pretty excited to try this groupset, and it performed flawlessly in our brief encounter. But now with our long-term tests, we have another german cross bike in our hands with the same Ultegra+685, so look for our first impressions post on that bike and setup in the next week or so. The other really unique feature of the Mares CX (and all of the disc-brake road and cross offerings from Focus) was the use of their proprietary RAT thru-axles (Rapid Axle Technology.) As a lot of cyclocross bikes are leaving quick releases behind in favor of the security and stiffness of thru-axles, most alternatives leave much to be desired in speed and ease-of-use. Focus’ 15x100mm and 12x142mm RATs let you pull out the thru-axle with just flip of  the quick release lever, then  a quarter turn of the lever. Speed is almost on par with a regular QR, probably faster than dealing with lawyer tabs, and the dropout guides that accept the endcaps of the hubs make it pretty easy to quickly align the rotors. We had one of the systems’ designers give us the low down on its development (suffice it to say, a bunch of mountain bike engineers wanted a light way to make the roadies happy) and will try to put together a little feature explaining the RAT this autumn.

In the end, we get the sense that the changes Focus made to the Mares CX this year have made it into a more versatile bike. It can certainly still stand up to full on cross racing (just ask J-Pow), but the bike might really shine now that it could put in some long days too. We’re trying to line up a test to happen later in the cross season, so keep a look out. One last really interesting idea that jumped out at us from Focus at Eurobike was their six mountain bike Factory builds. Easy to pick out by their low-key but unique white on grey finish with touches of bright orange, the Factory bikes are a way to highlight how some of the development team might build up their own bike, in a limited run that might not appeal to all of their regular buyers. Curiously enough, these special edition bikes aren’t all top end, with some sporting X9-level builds. But the general trend was towards simple 1x drivetrains, durable aluminum components, and all-purpose tires and wheels. I got the sense that the bike designers were happy to have an opportunity to spec a bike without profit as a primary factor, and at the same time hope for positive feedback that could push their standard builds down a similar vein in the seasons to come. In any case the Factory finish definitely stands out from their more conventionally built-up bikes.

braze on chain catcher is weak, flexible. also, THERE IS NO BRAZE-ON MOUNT on this bike. another also, this guard is appropriate for single ring use as well.

“The other really unique feature of the Mares CX (and all of the disc-brake road and cross offerings from Focus) was the use of their proprietary RAT thru-axles (Rapid Axle Technology.)”

Be cautious of this “RAT” technology, it doesn’t fit everyone’s 15mm Thru Axle front hubs. Way to go Focus – “proprietary thru axles” so stupid. Its a poor ripoff of the Manitou Hex-Lock anyway.

I’ve the Mares 0.0 disc with Sram CX1. Its a bloody brilliant set up. 7.0kg on the nose with pedals for an XL, handles well and I can easily stuff a 40c tire in there for my gravel racing.

@Fatso, my Chris King mtb wheels 15mm front and 12×142 rear fit fine, I would assume my crossmaxx SLR’s will fit as well. I don’t know what your getting at.

I have a few wheels that fit through as well. But the fork has a little lip that sticks out toward the hub. See this image ( 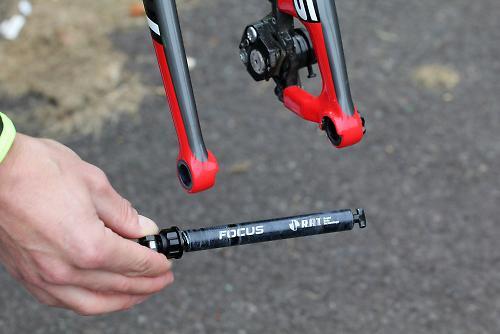 :large ) on the inside of the dropout area. Some hubs that will rub on cap systems, etc. My American Classic Aluminum Tubulars work just with the RAT but I have others that don’t because they hit that section.

@Fatso: which 15mm hubs don’t fit? I haven’t had any issues yet.

This bike has terrible geo. Check out how all who ride it, use zero setback seatpost and the saddle pushed all the way to the front. So why not design STA properly to begin with. Tradition sucks! Trek & Specialized get it, but I don’t like their bikes.

Focus will never get my business until they market their high end to riders >5’6″. I know a whole host of smaller riders who ride Specialized (including myself) and are willing to pay $5K or more for the right high end build, but our options are… Spesh or… Spesh again. With women’s CX racing exploding in the U.S. you’d think more brands would have figured this out by now. There are a lot more of us looking for better kit, and we’re not willing to settle for last years 3rd tier closeout with cheaply welded alloy frames, horrible geo and Sora drivetrains running cable disc or cantilevers.

How do you put a RAT Axel on an indoor trainer during winter months or for pre-race warmups???? I dig the bike but that is an issue for sure….

@fastchick, fyi, this is the hard to find geo chart:
http://cx.cxmagazine.com/wp-content/uploads/2014/04/Press-Release-FOCUS-Mares-CX-8-geo.png
@matt1025- my tacx bushido works fine with the RAT

@mudddy
Do you use a Kinetic adapter? Or wil it sit on the little nub of the axel, etc?
Thanks