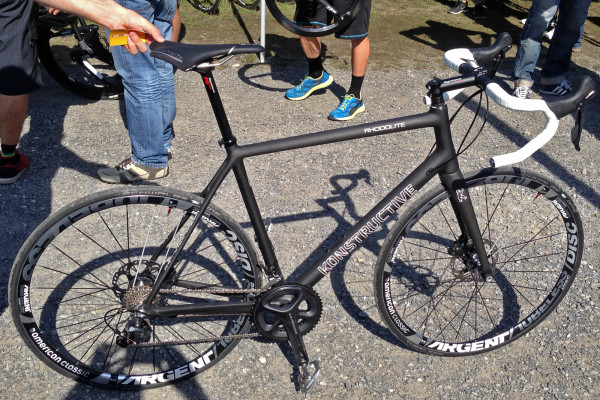 Small German frame shop Konstructive had a few new bikes to show both outside and inside at Eurobike. The second generation of their lightweight disc brake Rhodolite (we saw the first last year at the show) gets updated with thru-axles for the new year. While the bike has a race character, Konstructive developed the frame and the varied tubing shapes throughout to give optimal power transfer and bottom bracket stiffness, with a degree of comfort and predictable geometry that make it an all-day, all-weather machine.

Jump past the break for some more details, plus the new steel hardtail all-mountain Tanzanite and some variations on their carry-over models… 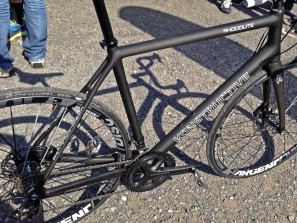 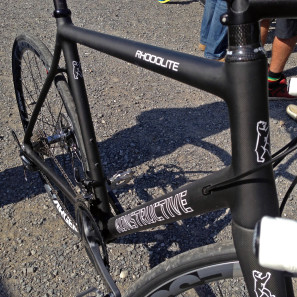 Designed as the future of road bikes, the Rhodolite v2 keeps the quick race handling of the previous model, and still manages a frame of just 850g (56cm) with the new thru-axles. Complete disc brake builds typically run below the UCI 6.5kg threshold with a SRAM Force build, even for larger sizes. (The bike comes in seven standard sizes.) Since their bikes are made-to-order for each customer, the final spec is up to the buyer, as is the possibility even for full custom geometry. 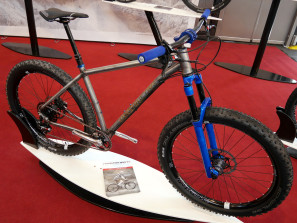 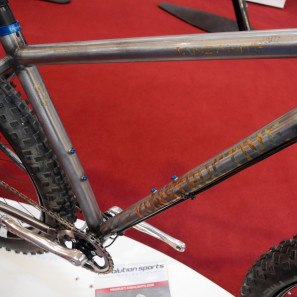 The new Tanzanite is Konstructive’s take on a modern all-mountain hardtail. With a raw finished CroMoly frame, the bike gets a long sloping toptube, short chainstays (425mm), and a curved seattube for aggressive trail riding. Frame weights are around 2300g for large sizes (four standard sizes available), and the raw frames can get a number of decal treatments before getting clear coated, with custom paint jobs also available through the Konstructive Custom Dream Bike program. 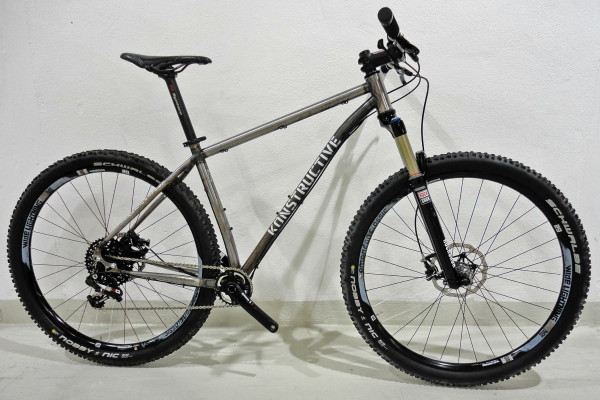 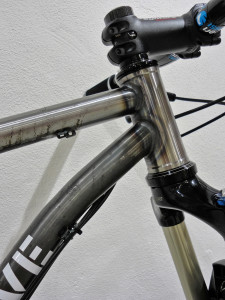 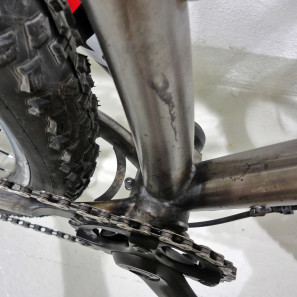 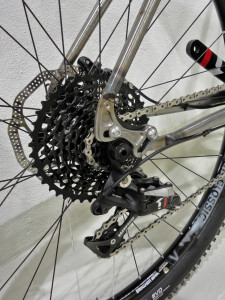 The 27.5″+ Tanzanite uses a 44mm headtube for tapered steerer compatibility. It gets widely set chainstays with a machined yoke to clear plus-sized tires. It even uses modular rocker dropouts for either singlespeed or replaceable derailleur hanger geared setups. While most builds go with 1x drivetrains, the round seattube makes the frame compatible with front derailleurs, and braze-ons are included for all options, including dropper posts, all externally routed. We were even told that a carbon 27.5+ Tanzanite trail bike would be available for 2016. 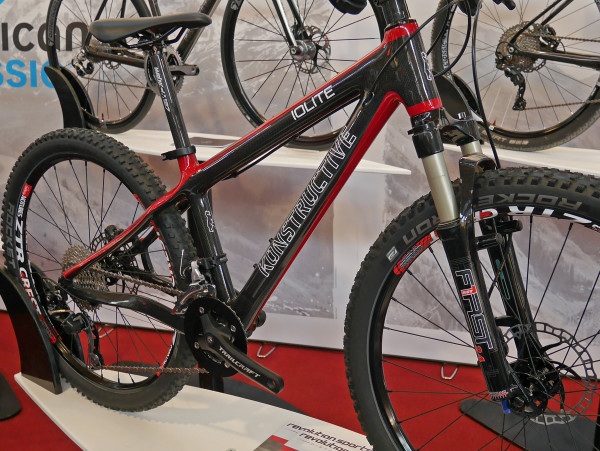 The Iolite is typically a carbon 29er hardtail. But showing off a bit of their  broad capabilities, Konstructive expanded the mountain range with this 24″ version for some very lucky kids. The 24″ Iolite Kids uses a similar layout in the front triangle, but had to go with a completely rethought rear-end to make everything fit. It even gets a tubeless setup thanks to new 24″ ZTR Crest rims from Stan’s. Like all of their bikes this one was designed and developed in-house in their Berlin HQ and constructed in Europe by their frame building team. 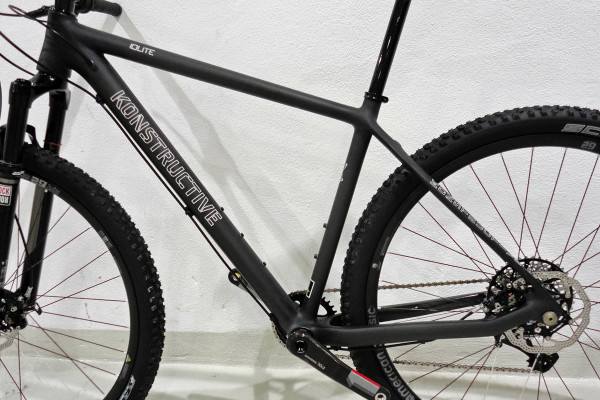 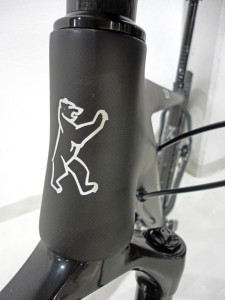 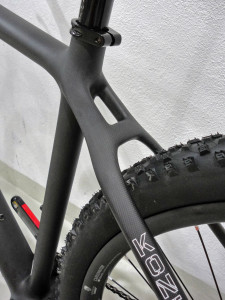 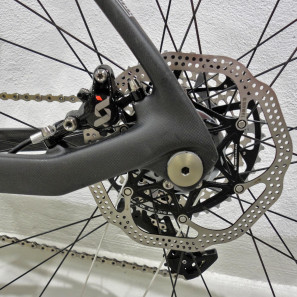 The standard Iolite is a pure race bike, and carries over unchanged with a large frame weighing in at 1050g. The rear end gets Konstructive’s flattened and joined chainstays, light thru-axle, and chainstay-mounted brake. The round tubing on the bike uses an especially hard surface layer that makes it much more durable than most carbon bikes to stand up to mountain biking abuse. 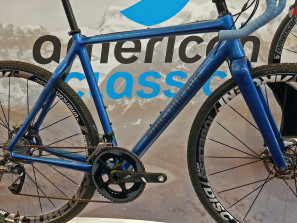 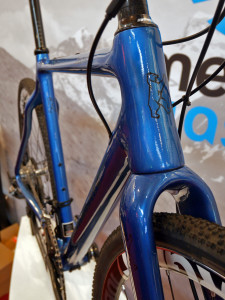 Lastly Konstructive had brought out their Zeolite disc cross bike as well. The bike sticks with more stable off-road handling then the Rhodolite, by way of more traditional cyclocross geometry. But it does build off the same stiff platform focusing mostly on power transfer, for a quick race bike both on the asphalt stretches and when the track gets rough.

developed the frame and the varied tubing shapes throughout to give optimal power transfer and bottom bracket stiffness, with a degree of comfort and predictable geometry that make it an all-day, all-weather machine

developed the blah and the blah tubing shapes throughout to give optimal blah transfer and bottom bracket blah, with a blah of blah and predictable blah that make it an all-day, all-blah machine

those carbon rigs have Sarto written all over them.

Yup. blah blah blah. How about some actual innovation instead of cliches?

Blah blah?
By all means, then. Start your own bike company and build something new and innovative that blows the doors off everyone else. And then watch people complain about how your bike either “isn’t that innovative/same old junk”, or it’s “ugh, so ugly! no design! what about the classics?!?”

Seriously, don’t like it? Don’t buy one. But avoid complaining that people are still doing things that work and using ideas that function.

The reality of this is that most people don’t understand carbon layup, filament winding, tube joining, etc. so whats the point of writing it all out? Also that would be like a baker posting their recipe which is just stupid. Also I’m sure More Cowbell has certainly ridden one before making such a bold comment…

Keep riding your playdough big box bikes, blah blah blah. These bikes are so German its painful. I’m sure more engineering went into these than you’d even care about, but that’s what sells and if you’re a German company thats pretty important to your market

So, the writers (where ever they are employed) just assume that the public is ignorant and has no interest in learning more about a particular bike. The other option is to write about the tech stuff and let the readers skip over what they consider “blah blah blah.” If that second option puts people out, then those people probably aren’t into the whole “reading” thing, bike tech thing, or the BikeRumor thing.

@Psi Squared ” If that second option puts people out, then those people probably aren’t into the whole “reading” thing”…

Ha, yup. Back when I was doing the evil, for monied up Asian businessmen who thought owning a bike brand was ‘easy’, the US team and I spent forever agonising over how much text to put in the website – I mean, how can you expect to sell something and explain a design without writing about it. Right?

The advice was, from many far more experienced folk than I, was that in the US anyway, the average bike consumer had a hard time reading more than a few sentences before loosing interest. Sad eh?

Today, with our own stuff I write as much as needed to explain the whatever it is. If someone can’t be ar@!ed reading that, then there’s a good chance they are not the sort of customer that would want what we do anyway.