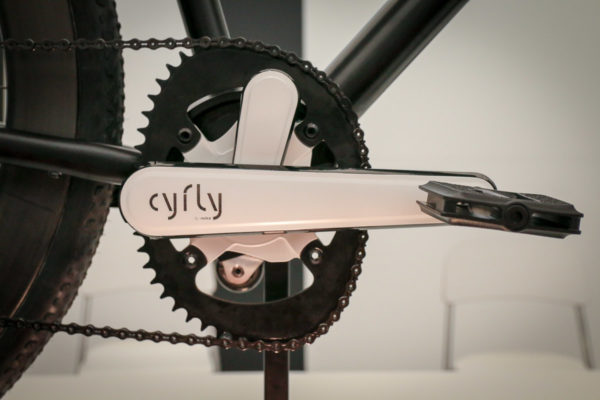 Forget simply adding oval chainrings to your bike. The Cyfly drive system is turning conventional crank design on its head. One of the more interesting and bizarre concepts shown at Eurobike, the Cyfly system promises up to 33% more torque out of the same pedaling effort, though it requires a custom bike to do it. Launched during the show, the Cyfly system also serves as the reincarnation of Moeve bikes – Germany’s second oldest bicycle brand.

With functional prototypes at the show including mountain bikes built by Nicolai, Cyfly does seems to deliver on its claims though it might take some getting used to… 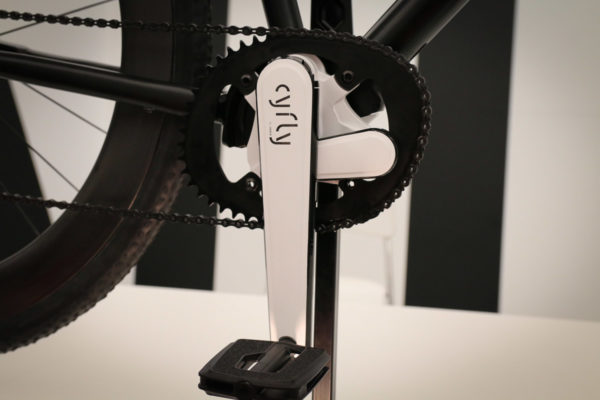 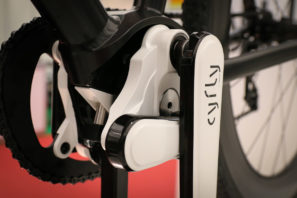 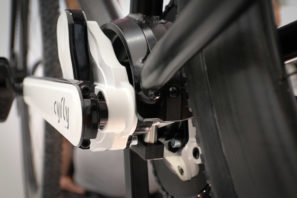 The more you study they Cyfly system, the more you realize just how much is going on. For starters, the whole system requires a custom frame with a bottom bracket mount similar to what you would find on a frame meant for a gearbox. Which is appropriate, since the Cyfly system actually houses two small gearboxes which provide the elliptical movement of the cranks. Not only do the cranks move in an elliptical motion, the effective length of the crank arms changes as they rotate. Production cranksets will be offered in two different lengths, 175mm and 182mm, measured at longest point which is where the most torque will be applied. When the cranks are at the shortest point, they measure 155mm or 162mm respectively.

These multi jointed cranks spin on their own geared housings which are each filled with silicone oil. The whole assembly is then bolted into the frame along with a near square chainring. As you can imagine, the system isn’t exactly light, as it current adds about 2kg to the weight of the bike. But compared to their first prototype that added 7 kg, they’re showing some clear progress. Cyfly is also covered by 4 patents and was apparently the creation of an elderly inventor who presented his idea to the Cyfly team. Now, they have support from numerous German technology outfits and have been accepted into an accelerator program that will bring them to Silicone Valley to continue to develop the design. 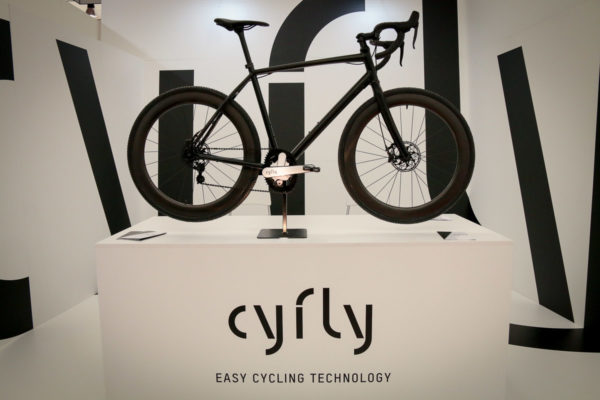 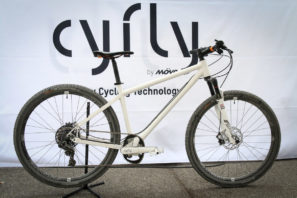 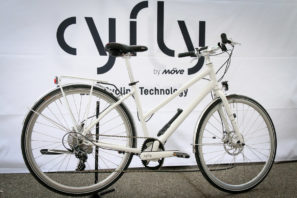 The system is 1x only, and requires a custom frame so it’s not exactly a plug and play solution. The team from Moeve bikes and Cyfly think the benefits are worth the hurdles and they will continue to work on the system to remove as much weight as possible before production.

We had a chance to briefly spin one around the Eurobike demo area and initially, you don’t really notice anything but the odd ‘chugging’ motion the cranks propel the bike forward with. After a while, that feeling starts to become more normal and you do notice that the bike seems a bit easier to move, especially at slower speeds. It would take a much longer ride to make any decisions on the system, but the system is definitely doing something. At the moment, the cranks are said to be maintenance free for 20,000km, at which point they can be serviced by a Moeve dealer. If all goes as planned, the first complete bikes will be available sometime in 2017 under the Moeve Bikes brand.

Power= the rate of work being done measured in watts

i
Reply to  mike

Ok, I’ll be that guy. Torque does mean more power so long as increased torque isn’t offset by angular velocity going down by the same factor or greater.

Mike: P=τω, so power is torque multiplied by angular velocity.

Everything old is new again. I started my bike shop employment in the mid 80s and remember finding a box on a shelf with Roller Cam cranks from the late 70s, maybe early 80s. Similar idea. Way less complicated.

Then, Rotor gave it a shot… now these folks.

I’m only here for the comments and to hear the “I’m an engineer, and…”

I prefer the, “This bike has two wheels and the 1960 Schwinn Panther II had two wheels…so it’s been done before” comments.

No way does a 2kg net weight increase make this desirable enough to sell well. no freaking way. Maybe if it gave you something more. A sealed transmission maybe(though I think a Pinion bike sees less than 2Kg net weight increase than the same model in a conventional drivetrain.) Rohloffs gain reliability with their weight. This?

Best I can tell, it’s basically “like oval rings but more.” nobody is going to be willing to trade 2kg for that.

“I’m an engineer, and…”
… there are improvement to do with power transmission between human and machine… but… simpliest and lightest solutions have high efficiency.

Will this also be less stress o the knees or worse?

I was wondering the same thing. It is tough to tell from the vid exactly how this changes the track that the pedal follows, and even tougher to tell the knee loading vs a normal crank. I can imagine that if the shortening of this crank corresponded to a range of motion that creates knee problems for you, then it could be better. Similarly, if it reduces a load on the joint at a vulnerable angle it could be better. It would probably vary from person to person though, as you have people saying Rotor style oval rings helped their knees, and others saying they harmed them. Similarly, you have Sheldon Brown saying Biopace is better for knees, but it is increasing/decreasing the gear in the opposite oval orientation from Rotor.

I’m nobody to question Sheldon Brown’s knowledge, but having ridden biopace 3 years in a row and having nothing but knee pain, I was happy to switch to round chainring back.

I’m just excited about the possibility of a new bottom bracket standard.

So pretty much the original rotor cranks with slightly different pivot points to make it patent-able.

What is the purpose?

Would that extra power be lost to the 2kg of added heft? And over time, more moving parts equals more friction. Excited to see this though and I hope it takes off.

A geared version of Rotor’s original cranks that did it all with cams. In the end, there’s no free lunch. Drivetrains are extremely efficient, and sticking little gearboxes everywhere isn’t going to help a thing.

As with all other systems of this type, basic physics seems to have been forgotten completely…

“basic physics seems to have been forgotten completely…”

Why? Not talking about efficiency, but from a kinematics point of view: doesn’t the system try to have a more uniform lever arm over a rotation, given the direction of the forces exerted by the legs? Just asking. This is not like a Z-shape crank or similar scam.

You can change the torque all you like, but that doesn’t change the power that enters the system from the rider. Since standard bicycle transmissions are highly efficient, the only things that can make you faster for the same power input (or reduce the power input required for a given speed) are decreasing drag and weight. Since this system adds 2kg to the whole bike+rider system, and doesn’t increase the power input, then the only thing it is doing is making the bike+rider slower, or work harder to go the same speed as on a standard bike.

Think of a high load situation like climbing. Oval rings let you spend more time powering and less idling (deadcenters). Thus you are able to put more power into the system over time. These guys are now adding a longer arm for the powerphase than allowed for by the limits of leg length on a fixed arm so that adds power. Putting both together is allowing more power to enter the system minus whatever inefficiencies the gearboxes and bushings will likely have.

Being a weight weenie I will likely never own this system but I would sure like to try it and see the effect.

Is it too late to assume the brace position…?

I am just wondering whether someone in this company have a powertap wheel…?
It will clearly tell if there is any efficiency or not.
(or they intentionally ignoring?)

I am sorry guys, but GOOD GRIEF! Here we go again. The biking world is so much fun. I really enjoy the what goes around comes around stuff.

that system has been discussed in great detail in german bike forums for almost 2 years, that is how long the crank has been announced. Independent engineers with cycling background have calculated the proposed effects and found no benefits.

In 2 years, Möve reduced their initial promises (“50% more power”) to “up to 40% more torque”, which is a bit strange to say the least. Numerous marketing texts and discussion entries by Möve have been made, none of them could describe the benefit in a technically or physically clean way. Strange for a company of engineers.

For more than 2 years now, Möve Bikes has failed to publish any test data, despite having done numerous test runs (we know this because their marketing machinery keeps us well informed).

Improving “efficiency” of the circular crank movement is by no means a new idea. Numerous systems claiming to improve on that have come and gone.
There is evidence that “inefficient” cranking has no effect of the efficiency of cycling – there is a study around which showed that “cranking efficiency” can vary a great deal between different cyclists who still are on the same performance level (subjects of the study was the german track racing national team)

The Möve system increases the “virtual” crankarm length. This will give a small advantage when accelerating at low speeds. At cruising speed, there is no advantage, but a number of disadvantages – increased complexity, weight, more bearings to be sealed and maintained. For the premium such a system will add to a bike’s price, one could get very nice E-Support systems.

“The Möve system increases the “virtual” crankarm length.”
is not doing even that… it’s all a bad bad misinterpretation. the virtual crank is getting smaller actually while pedal around 3 o’clock. there is no increased torque since the leverage gets smaller. i am shocked that some engineers did that.

Incredible bullshit that boils down to a catastrophic misperception of the Möve founders: that the force along the crank axis that is not converted to power because the crank lenght does not change (force times distance = zero) leads to giant power losses, therefore the crank length has to be made variable.

More than anyone ever wanted to know about this embarrassing failure of the Möve engineering firm can be read here:
http://forum.tour-magazin.de/showthread.php?321440-Der-M%F6ve-quot-Cyfly-quot-Thread-50-effektiver-Radfahren!

(sorry only in German)