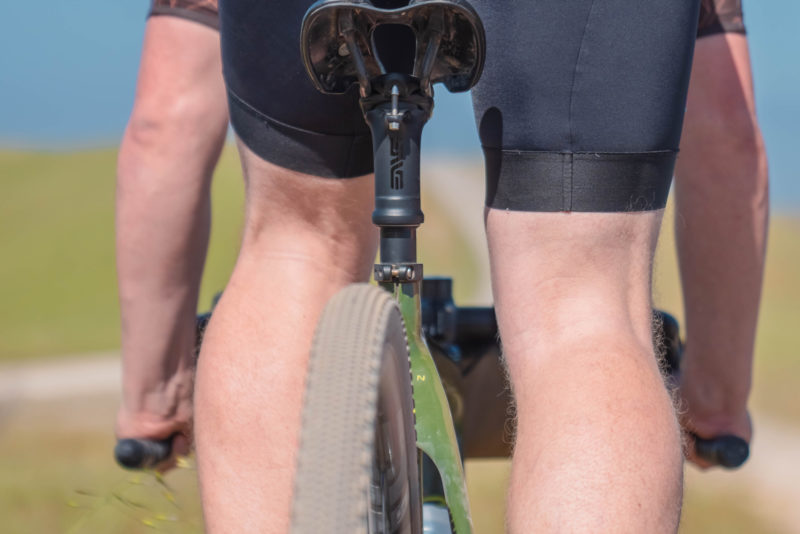 ENVE has released its first ever dropper seat post, the G-Series 40mm Dropper aimed squarely at gravel riding. The inverted design makes it stand out from the crowd; it elevates the cable-operated internals up and out of the seat tube, extending beyond the post’s rail clamp region, resulting in what ENVE claim is the lowest stack height on the market. It’s fairly lightweight too, with a claimed weight of 395g that can fall to a minimum of 345g after trimming. 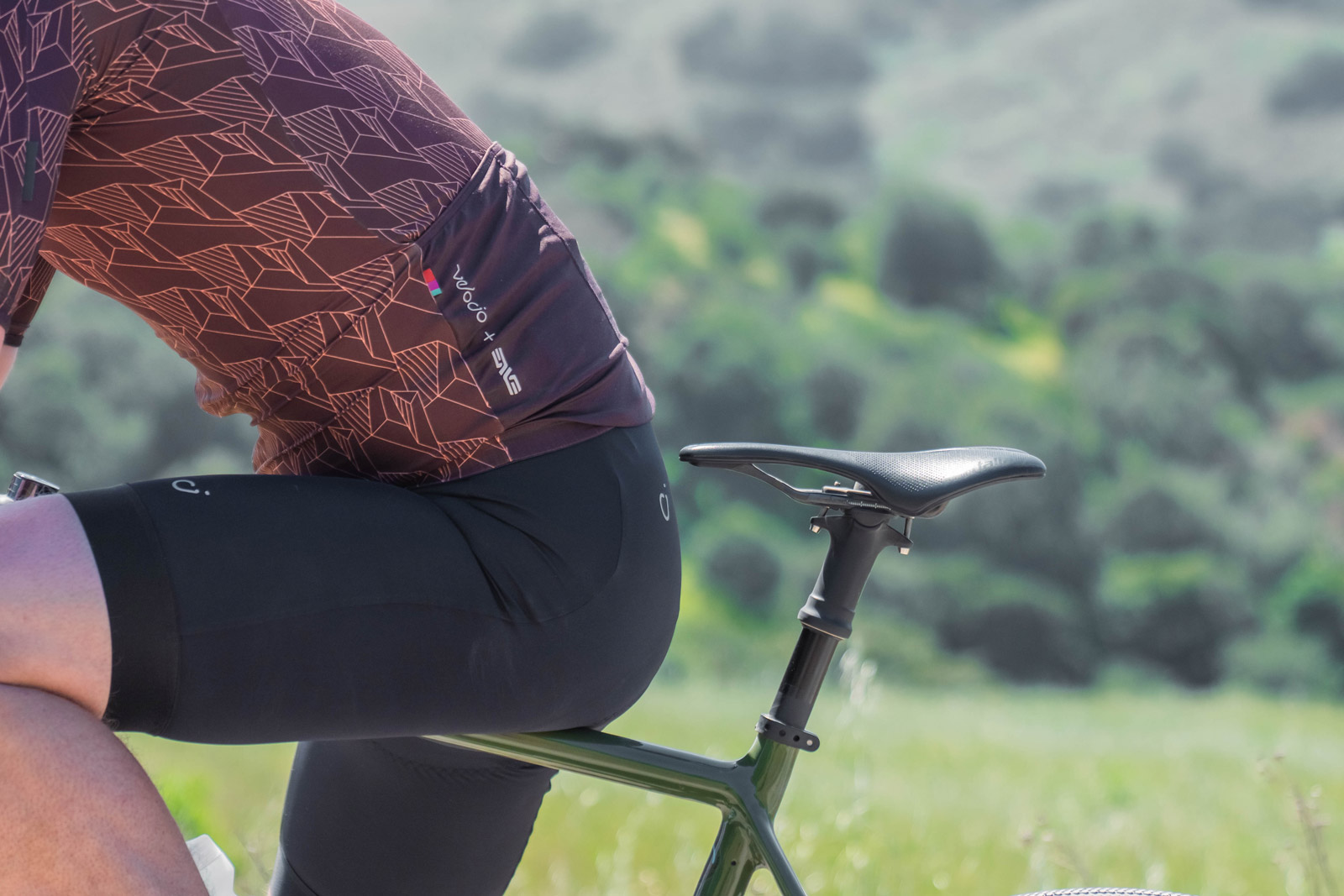 The ENVE G-Series is an inverted dropper seat post designed around 27.2mm seat tubes, the most common seat tube diameter seen on gravel bikes. It offers 40mm of drop length (non-adjustable), and ships with two shims to allow fitment to 30.9mm and 31.6mm seat tubes, for those who want to run it on their XC mountain bike. 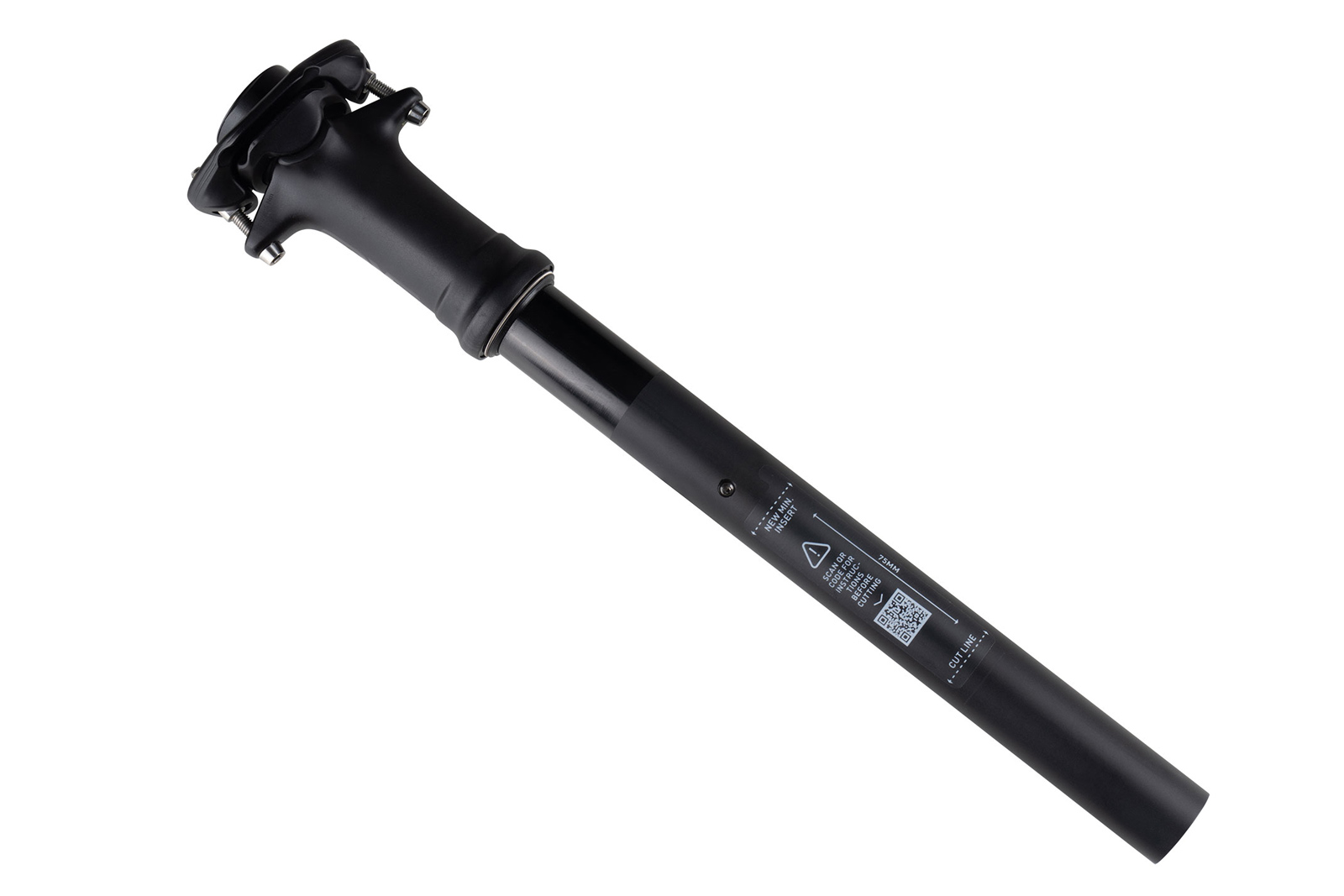 Untrimmed, the post is 350mm long, but can be trimmed down to a minimum of 220mm for those who don’t need any additional length to find their perfect saddle height. The minimum insertion length is 75mm. Importantly, the stack height is a mere 145mm, and is alleged to be the lowest stack height of any dropper seat post on the market. 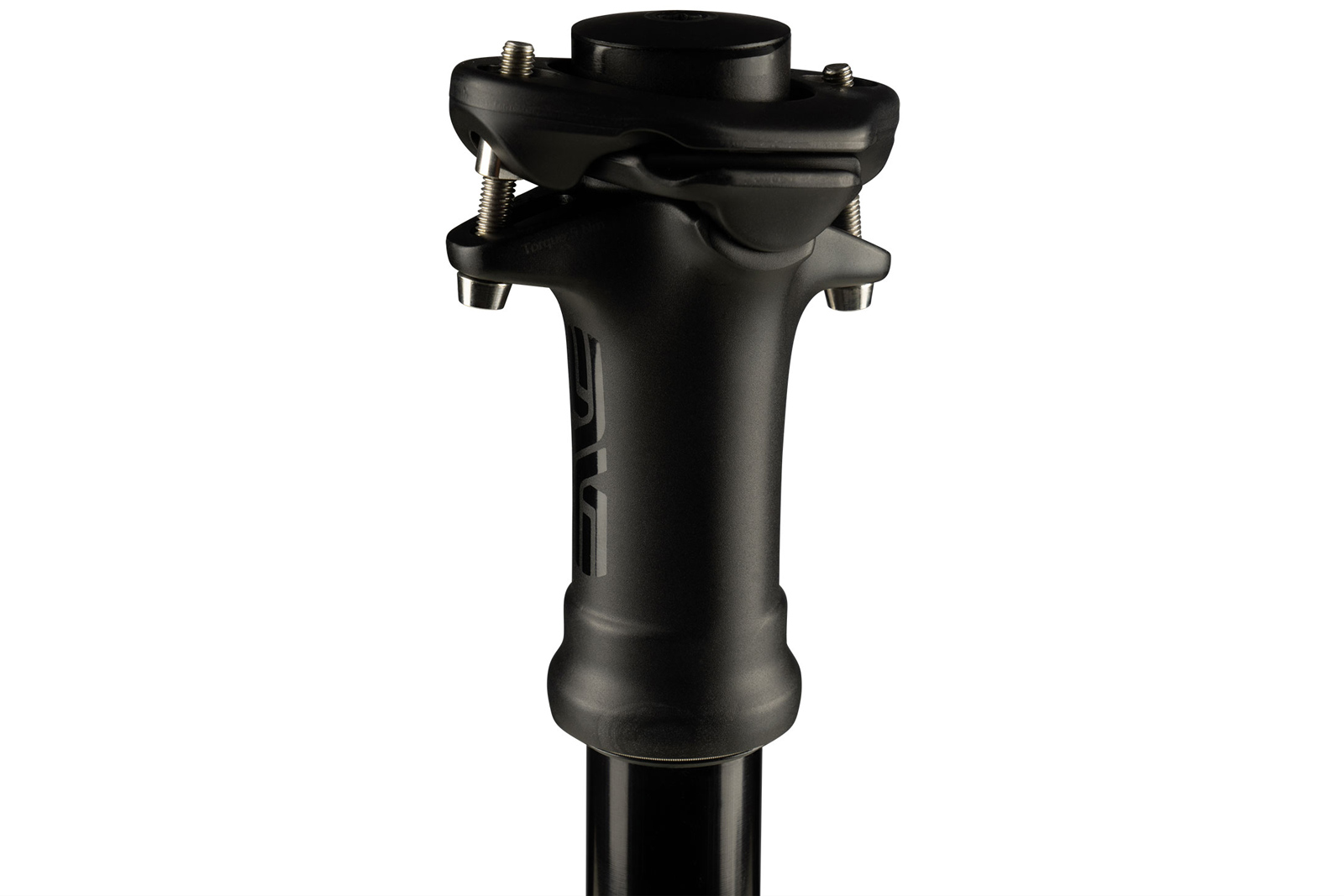 The post runs on brass anti-rotation keys as opposed to regular plastic ones that are more vulnerable to wear, and can lead to the post knocking as it rotates side to side

Inverting the post positions the fully-sealed hydraulic cartridge and other internals north of the seat tube. ENVE package it all in a very compact fashion, with the head of the cartridge poking up through the saddle rail clamp for maximum clearance. The clamp itself is a regular 2-bolt design and is compatible with any saddle rail; alloy, steel, carbon or otherwise.

ENVE says the G-Series dropper post is very reliable, and can be serviced without the need for any special tools. It is also completely rebuildable with the purchase of a $115 USD rebuild kit. The seal and bushing service kit retails at $10 USD. 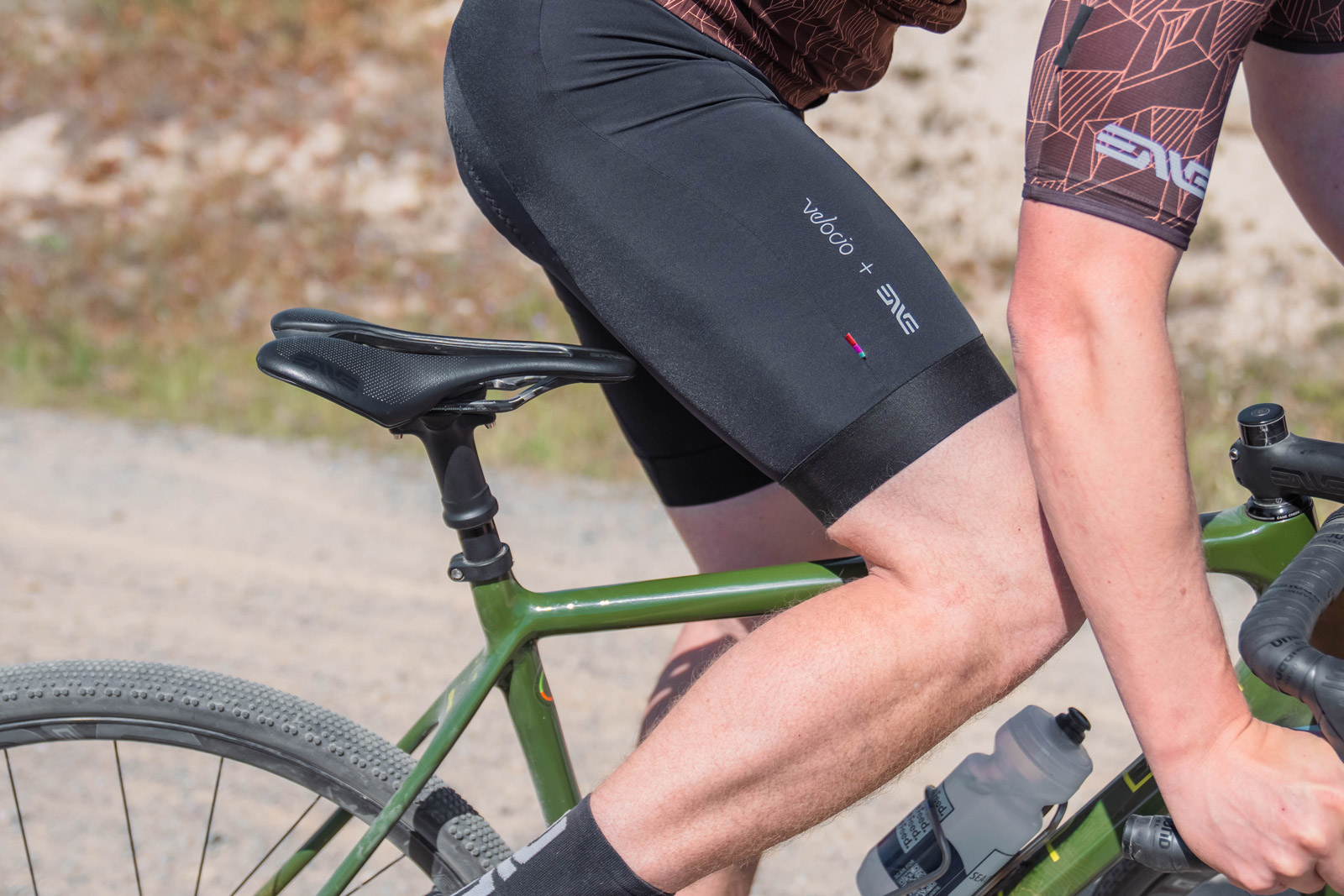 The G-Series Dropper is good for anyone that runs at least 140mm of exposed seat post on their frame. The frame must permit internal routing with clearance around the bottom bracket.

A secondary advantage to the inverted design is the resulting compatibility with saddle bags. Running a saddle bag on a traditional right-way-up dropper seat post would run the risk of the bag scratching the stanchion of the post thereby compromising the seal; with this inverted dropper, the saddle bag sits well clear of the stanchion.

Another consideration here is that the inverted orientation exposes the seal to debris picked up and flung off of the rear tire. Something like a trimmed down Postfender would go a long way to protecting the stanchion and seal, and could help improve the lifespan of the post. ENVE say the inverted design means that gravity keeps most water and debris away from the seal, rather than sat atop it. 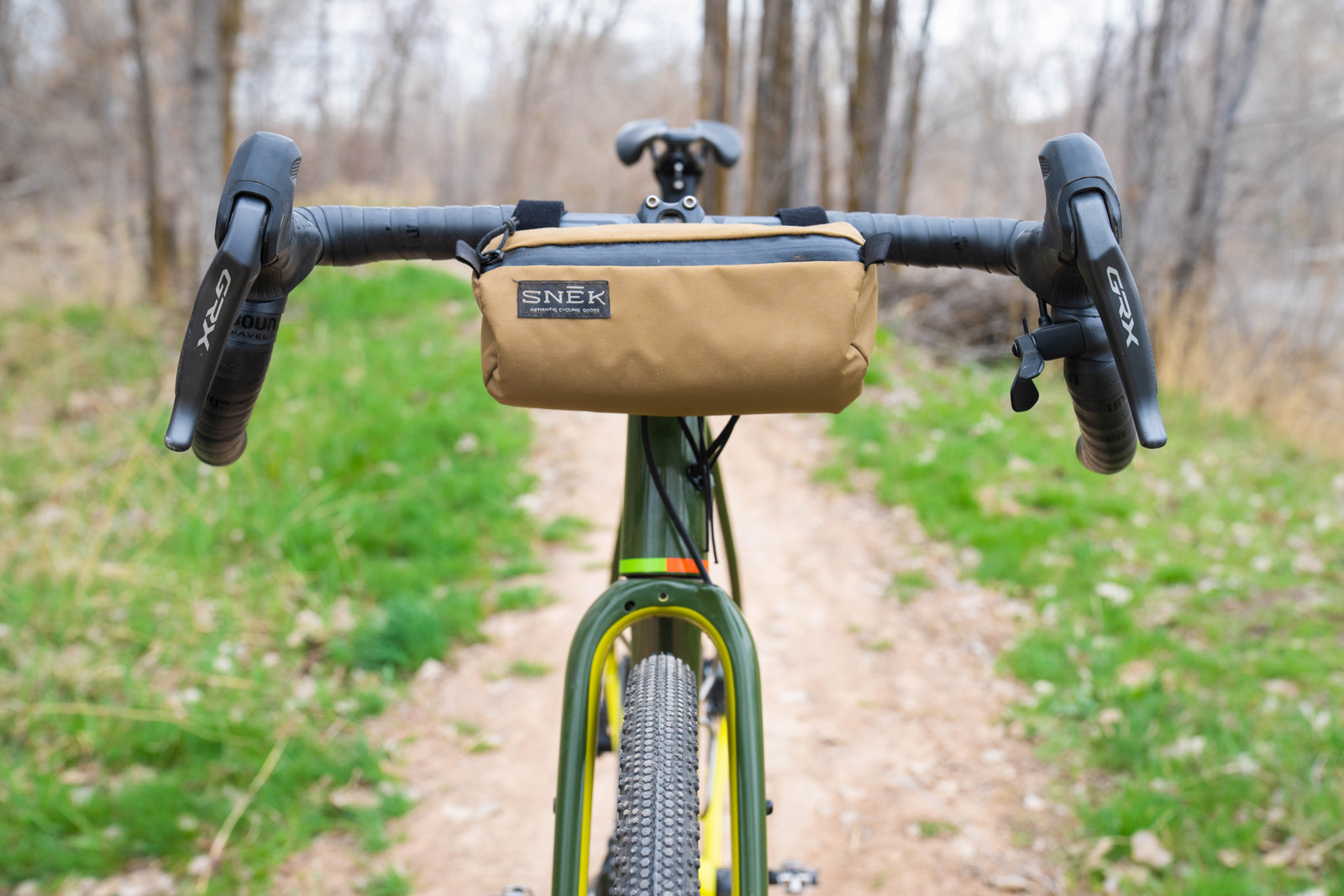 Your $325 USD gets you the ENVE G-Series Dropper Post only. It is compatible with any cable-operated remote lever on the market of course, but ENVE do sell their own drop-bar dedicated Dropper Lever. It will set you back an additional $65 USD. 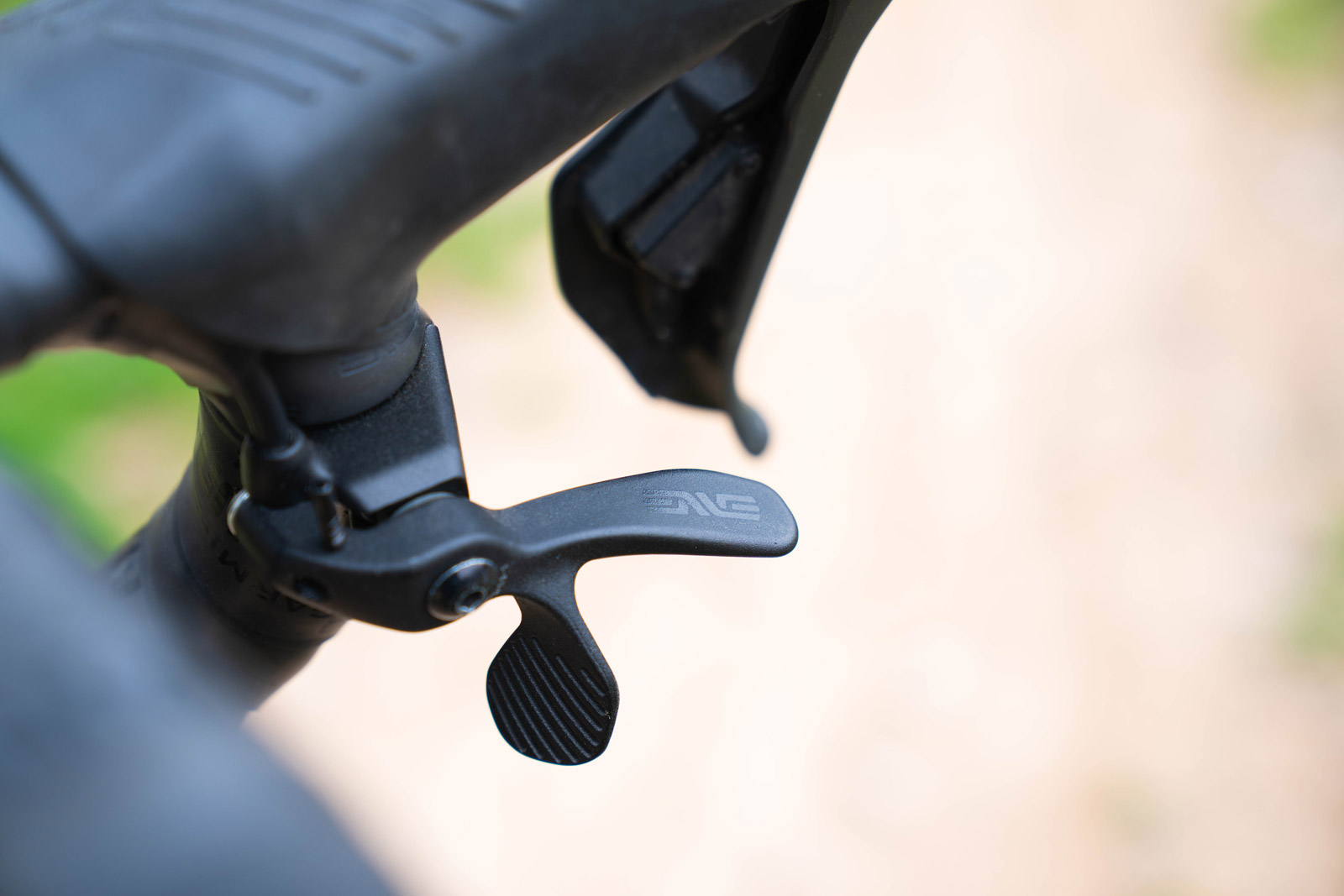 The lever can be operated from the hoods or from the drops. There are two paddles, one facing rearward that can be pushed by the rider’s thumb when on the drops, and the other positioned forwards that can be pulled with the rider’s index finger when riding on the hoods. 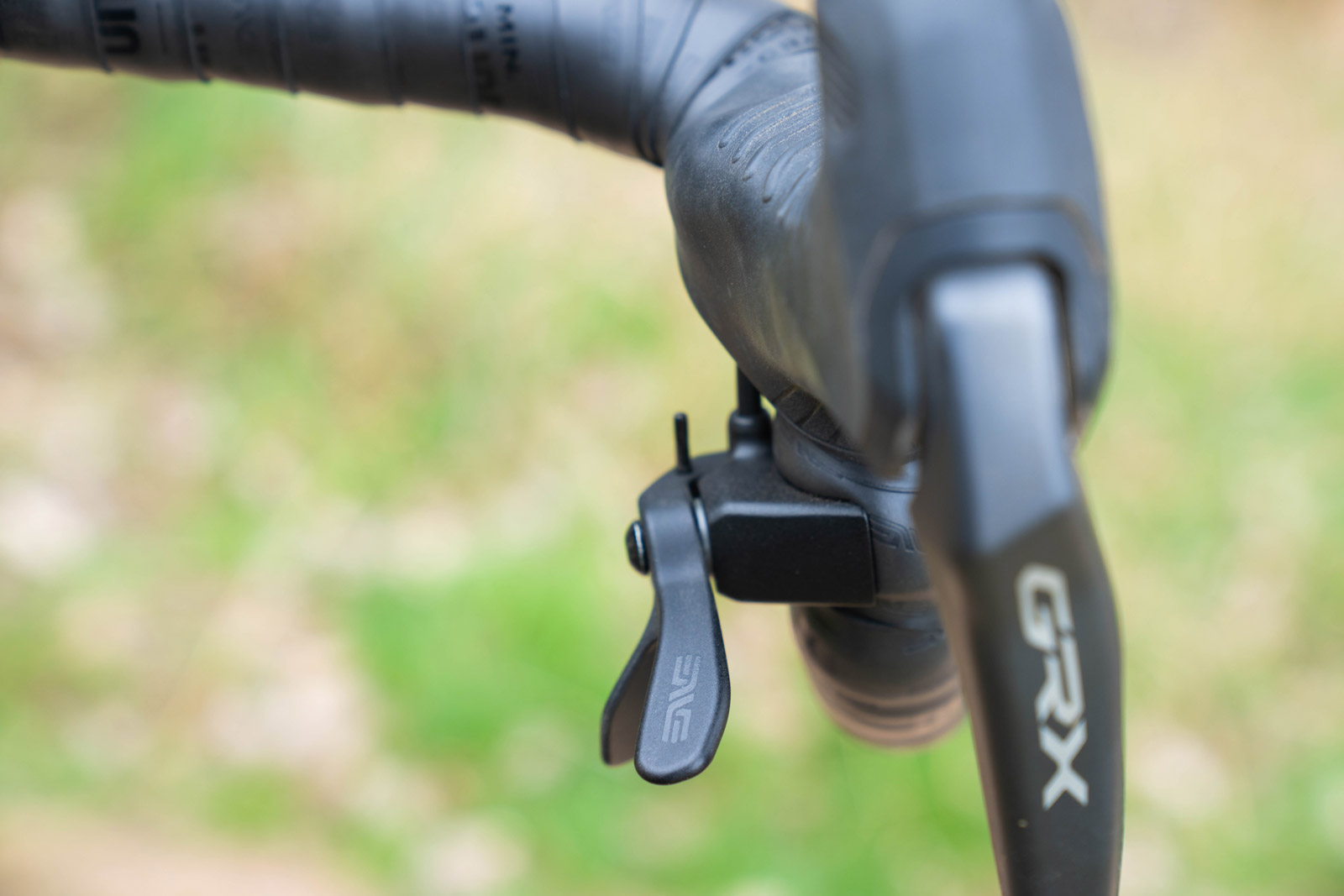 if this really compatible with any remote lever as stated in the article? Can my GRX or SRAM left brake lever w/ built-in dropper post actuator work or does the cable clamp at the dropper itselF rely on the cable end to fix/hold the cable?

ENVE has confirmed that the G-Series Dropper works with both a left mechanical shifter or a dropper lever. We’re just waiting for some images to confirm how it is installed.

Gravel is getting pretty rowdy these days. 40mm is not enough travel but it’s better than nothing. I’m just bitter because I’m out of the game with my Revolt “D-Fuse” shaped seatpost.

Unfortunately the cost of a dropper engineered for the D-Fuse profile is probably equal to a newer frame that accepts a seatpost standard.

I seriously doubt the value of a dropper post on a gravel bike (if you need a gravel post, you’re on the wrong bike!), but this weekend I needed to hop a ~10″ log on my touring bike, and that got me thinking about it. If you’re going to go with a dropper post, 40mm isn’t really going to do much for you. 80mm, maybe. 100mm seems like it would be more useful. What is the point of this product?

As an avid gravel rider riding 50mm tires I would say that sometimes I would have appreciated a dropper post. And 40mm travel is more than enough for most I guess.

As an avid mountain bike on a fully rigid bike… I would pass on a dropper. with the right setup, there should not be a big issue for most people.

It depends heavily on the terrain you are riding. Here in the PNW, we have some really incredible backcountry routes that are often 70-100mi in length. 70-80% of the ride might be tame gravel and road with 20-30% being rather burly downhill singletrack.

You could argue that an XC bike would be the right choice, but it just depends on what you want to optimize. I think having products like this will help some people.

Myself, I just drop my rigid seatpost slightly for the downhills, as I’m not concerned with how fast I complete these routes.

Fox transfer SL weighs less at 350g, doesn’t need a hacksaw, and has 100 mm of drop… And shorter drop options for gravelouers.

For the 27.2, it’s either 50 or 70mm. And it’s only fully up or fully down, but that hasn’t bothered me considering the short travel.

The only attractive features are the ability to use a regular saddlebag and a normal two bolt saddle clamp. The rest just seems like marketing spin.

DT Swiss does an inverted dropper with 60mm travel. Even more drop would be cooler.

Like I let other people ride my bike, yeah right…

Keep buying newer and newer gravels until you realize they sold you a lightweight mtb.