You might be able to call yourself King of the Mountain on your local turf, but The Red Baron is truly the one man who deserves the title. On March 28th, 2015 Eric Barone dropped into a high alpine glacier at Vars Ski Resort in the French Alps, and set the new world mountain bike speed record of 223.30 km/h, or 138.75 mph.

Barone was intent on beating the current on-snow record of 222.22 km/h, which he set himself in the year 2000 at Les Arcs ski resort. 23 technicians were on hand to inform Barone that 15 years later, he had accomplished his goal and set a new world record.

Click past the break for photos of Barone’s bike and speed suit. 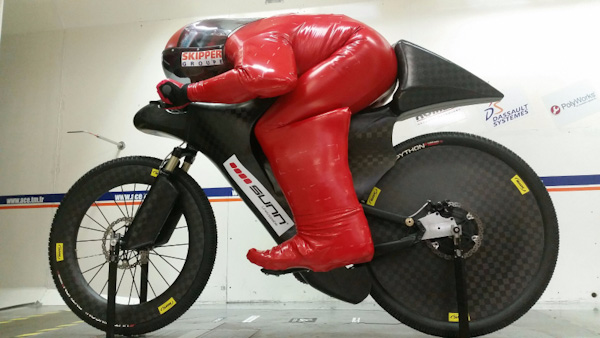 On the day of the attempt, the Red Baron had some tough conditions to contend with. The snow track is located at 8850ft altitude, so while Barone was setting up at 7:30am temperatures were at -4° f and winds were gusting up to 43 mph, making it hard to hold his bike upright at the start line. Furthermore the first thousand feet of the track was made of rough ice which Barone took a ‘freeride line’ down, according to his website. 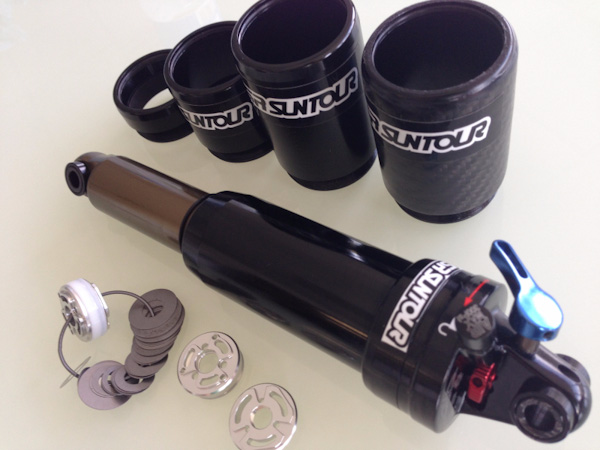 Stephane Guillaume, head of fork and shock development for SR Suntour worked closely with Barone on the bike’s design. For suspension, the bike uses a stock Auron fork chassis with customized internals and the travel reduced by 70mm. The rear shock is Suntour’s new Unair model, which Bikerumor recently reported on. 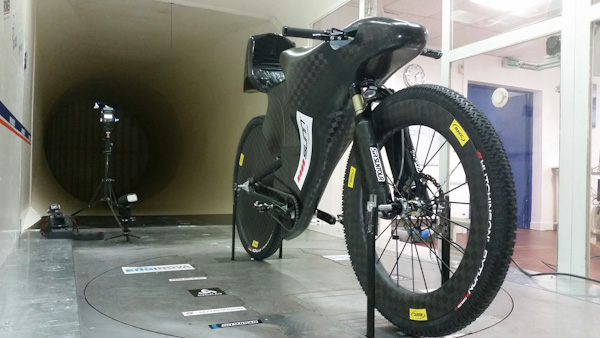 Barone’s new record was the culmination of a three year project with an exorbitant price tag. Over $87,000 USD was spent just on developing the F2.0 prototype bike, and after track construction and other costs the investment into the project totaled $195,000. But hey, he did go 1.08 km/h faster!

For more about Eric Barone’s speed records, check out his personal website here.

…but he didn’t Strava it so it doesn’t count!

That last paragraph is where I’m left at. It’s very easy to say “they spent so much for so little”, but sometimes that’s the reality of things. The little watts in road cycling frames, wheels, helmets, etc gained through R&D investments and moving for high prices…adds up and it’s decisive on the premier levels.

$195k isn’t *that* crazy in whole view of a project investment. Big ups for their ambition. Bike is a pretty cool piece to look at as well.

It’s a steep slope, but not a glacier. There is no glacier in Vars. The start is at 45°.
http://www.vars.com/hiver/gb/vars-ski-de-vitesse-stade-permanent.asp

This thing is really cool in actuality.

Awesome comeback from earlier bad bike design (which was “painfully obvious” even before he used that claptrap).

I agree with Ventruck – plenty of teams would have trouble developing ANYTHING for $87K. Sounds like a rather efficient project to me, especially with all that custom CF. Congrats to Eric and Co!

I actually have a 2nd overall at 168mph on a Strava local rotary seg. Kom is like 181mph. Sorry Eric.

I’d like to see him or anybody do it on a regular mt bike; one that is sold the the average Joe instead of these custom bikes you don’t see on the trail. Come on, $100k+ for a mt. bike?

…yet he still couldn’t keep up with Jens Voigt!

Who needs a fat bike?

He’s 54 years old. This give some of you ‘young’ guys something to shoot for.

Wait… why does he have Sunn stickers on when the chainstays are from a Scott Gambler? Is this some sort of frankenstein bike?

you are looking at the future design of triathlon bike frame… the extravaganza design.

I love their enthusiasm … 🙂

@CeeJay: “Is this some sort of frankenstein bike?” I think that answer is pretty d*mned obvious.

I thought all world speed records had to be an average of a run in both directions? doesn’t count unless he rides back up..

all joking aside, that takes a lot of guts, especially after what he went through. big respect.

onestly, i read all coments before – 190k much/less was spend it by a team to have a New World Record on speed… Just look at official movies – him don’t need to use pedaling… Bike, if, is available in store – or – pre-order – will not be 190k (in retail) because are some persons/people which want to buy this product…
Came to look a bit about speed – even “pro” cannot manage to have that speed – I was in one very old Mercedes 600 (I’m sure some of you wil remember that brand) – and driver – on sthrighrt road push till 140 km/h… – can go faster – but I feel myself pushed back by force… (don’t be so crazy to try to do what this guy do it without preparation before…)

So, enjoy your cycling… with your speed and your value…