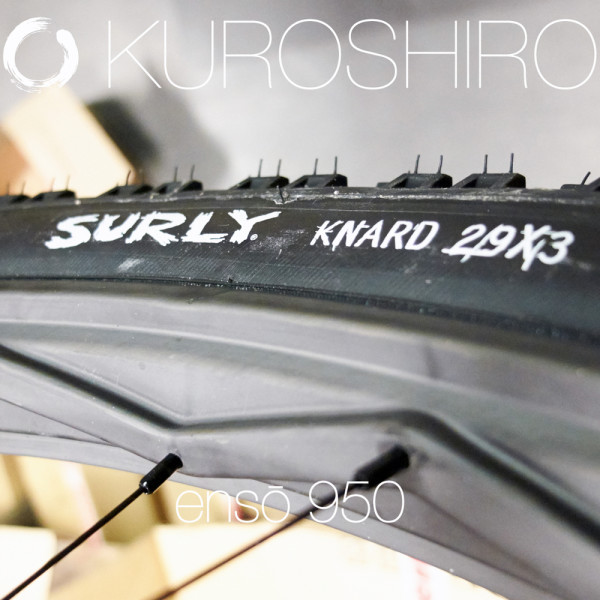 Earlier this year while Minnesota was trapped in Nature’s icy grip, we met with Mauro Bertolotto of Raceware Srl. Mauro was very excited to show us a special project he had been working on – the first Kuroshiro carbon rim. Unlike most companies that specialize in high end carbon goods, Kuroshiro was starting with products specifically designed for fat bikes. Using a number of intriguing technologies, the Enso 685 was designed to be one of the lightest fat bike rims on the market.

Now, Kuroshiro is introducing their second product, the all new Enso 950. After deciphering the naming structure, we’re left with a 29” rim that is 50mm wide. Perfect for the growing 29+ market. Created to be just as impressive as the 685, the 950 continues with a bit of new carbon technology to offer even higher performance.

Just like the 685, the feature packed 950 won’t come cheap, but it’s not every day you can drop 5 pounds from your bike with a single swap… 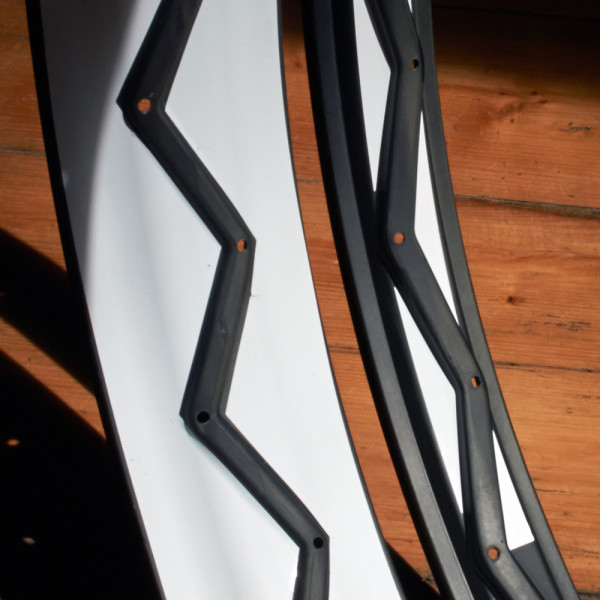 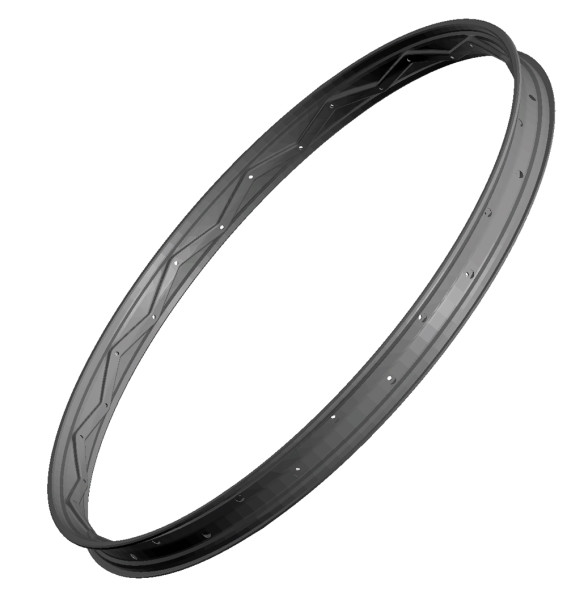 Just like the Enso 685, the 29+ version of the rim uses Kuroshiro’s patent pending SP-line rim reinforcement. By using a continuous ridge of carbon that connects the anchors of each nipple, the SP-line design claims to boost stiffness by 22%. Since the spoke holes themselves are reinforced with the extra cabon, nipples can be run without washers. As with the 685 this allows the Sapim Super Spokes to be run at higher tensions which eliminates the need for tubeless tape.

Enso rims simply seal up tubeless with sealant and the pressure between the nipple and the specially drilled holes in the rim alone. Mauro points out that the amount of tape typically needed to seal 29+ wheels comes in about 40g per set. 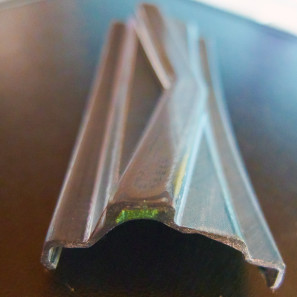 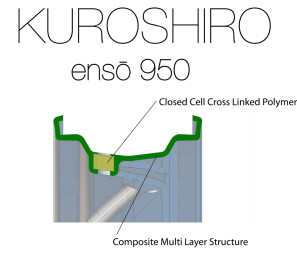 While the SP-line is similar to the 685, the 950s have a big changed to the actual structure of the rim to increase stiffness. Since 29” rims are inherently larger than 26”, it takes more engineering to make them as still so Kuroshiro introduced a special box section to the rim. More than just a double wall section though, as you’ll find a special closed cell cross linked polymer inside.

Using a proprietary process, the polymer is added to the box section before the final layer of carbon is added to the top. Used in airplane wings, rotor blades in turbines, and racing boat hulls, the polymer ends up boosting the stiffness of the rim without adding much to the weight and decreasing vibration as well.

While hookless rims might be catching on in other areas of mountain biking, fat bikes seem to be holding onto the hooks for now. Kuroshiro says this is due to the fact that they can build a strong and precise bead lock thanks to Alchemist’s proprietary carbon skills that will resist rock impacts and damage from riding with low pressure. 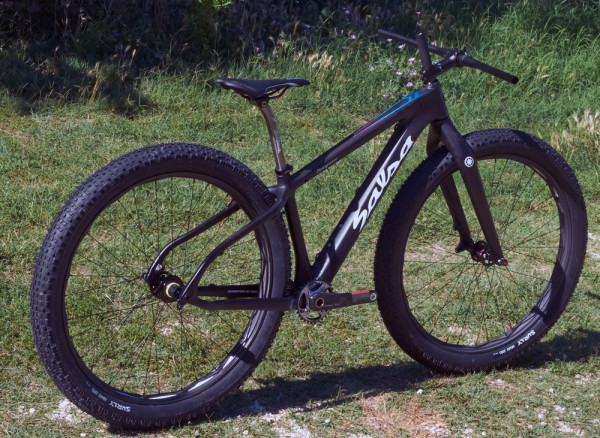 One of the growth factors in the rise of 29+ wheels and tires, is that they make an excellent “summer” set up for fat bikes as well as dedicated 29+ rigs. There are many fat bikers who will choose to keep their fat treads year round, but just about any fat bike is able to run a set of 29+ wheels and tires. This still provides gobs of additional traction and flotation compared to standard 29ers, but increases the speed and agility of the bike compared to full on fat. Mauro points out that the 29+ Enso 950s are also capable of being run on most 29ers with 2.2-2.4″ tires. Mauro set up a Salsa Fargo with the Enso 950 wheels and standard 29″ tires and noted an increase in traction over the standard wheels. 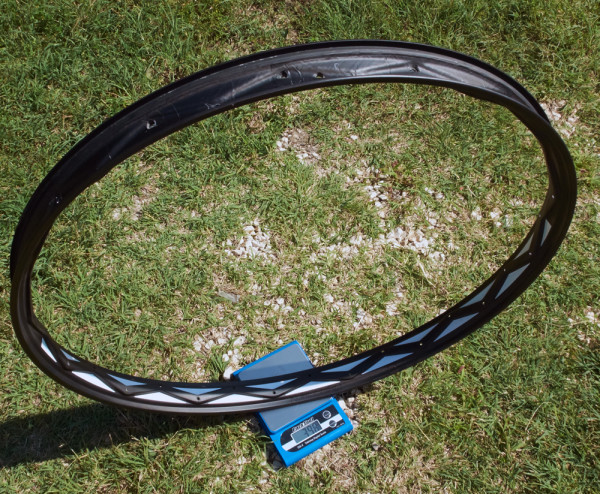 Already in one of the last stages of preproduction, Kuroshiro hopes to begin full scale production next month after less than 18 months of development. Enso 950s will be offered in rim only or in complete wheels with Sapim Superspokes and American Classic 130/225 hubs. On Mauro’s scale the rims come in at 398g a piece with complete wheelsets as low as 1,560g. That means that when compared to a set of standard Surly Krampus wheels the Enso 950s are an incredible 2,560g lighter. That’s over 5 pounds!

Kuroshiro rims are 100% designed and made in Italy, with the Enso 950s retailing for 849 Euros. The US price is to be determined with the same going for the price of the complete wheelset. All wheels include a two year warranty and are eligible for a crash replacement policy. Enso 950s can be ordered now with the first rims expected to ship to Italy, Switzerland, Germany, and the UK by the end of the month.

Well, it looks I did a typo on my doc to Bikerumor

The saving not having the tape is 40 grams, 🙂 it has much more sense and this is why the technology is called Below 40 🙂
Sorry guys… my mistake.

@Mauro I thought that sounded a little off. Thanks for the clarification.

i’m calling bs on the claimed weight savings over standard krampus setup. i’m sure they’re heavy and all, but even if you are including the weight of the tubes that you’re ditching, it’s still a big stretch, and misleading.

Sorry Sean, thanks again for your comprehension.

Does Bikerumor even bother to validate these claims- over 5 lbs. lighter than what exactly?

The rims themselves are “only” 300 grams a piece lighter than Rabbit Holes. Even after factoring in the lighter spokes/hubs and elimination of tape/tubes, doesn’t seem like much more than three pounds could be saved. Still huge savings, no need to breathlessly relay exaggerated claims.

5 lbs over the STOCK wheels. So yes, hubs and spokes save some weight too.

You ordered these yet Jon?

Yes, spokes and hubs are helping. We are going to offer complete wheel sets immediately using American Classic hubs that fits perfectly for weight and quality. The real saving related to the rims is a) weight saved on the rim considering enso 950 is 395 grams. b) the absence of tube and of rims trip and the addition of two cups of Notubes sealant.
Anyway.. a lot for a wheel with a so big diameter. We tested the wheels on a new black Krampus and it feels much faster…especially in accelerating and turning.

Thanks for clarifying that Gabe, so how much do the stock wheels weigh- nine pounds? More like six.

So there is a bit over two pounds in the wheels, but even if you accept the premise that:
a) you don’t want to run rim strips with these rims (hope you never break a spoke!)
b) you have to run tubes on the Rabbit Holes
losing the tubes/rims strips (then adding back sealant) is simply not going to save you another 3+ lbs.

I’m really digging the design in Kuroshiro’s rims. Can I please have them in a non-fat version? Standard, 26-inch enduro-capable rim?

Hi Luiggi…. no plan for 26-inch rims. There are great product there already available and it’s a ‘mature’ technology we consider very well optimised.
We try to help new standards growing to higher levels, like fat bikes and the very promising 29+ bikes. These standards with very light wheels can open new perspectives.
We can’t wait to see how a Salsa Bucksaw full suspension fat bike will perform with so light unsuspended masses. This complete package can really change the way to categorise ‘technical trails’. 😉

Sean, we TESTED the weight removing two standard Krampus wheels and adding two sets of Enso 950 including two good cups of Notubes sealant per wheel.
Be sure, this is the difference. Exactly 5 pounds, 10 oz.
It’s not all merit for the rims, sure. Spokes and hubs are doing a big help too, but this is the real, tested gap. No bs. 🙂

ooowah 850 HUGE euro spennies for a rim….£$%^@!……hang on to ya knickers….
sorry, ah i can’t see weight loss versus value here at all.
yes to gorgeous bicycle stuff…..love it all…..scarey costs for the latest stuff though.
diet, train hard and ride will save 5 pounds i’m certain, think what you can eat with the savings.
does carbon fatbiking = slim wallet…???
fab product though.
let’s see what Stan’s HUGO 52 wobble out at….????
ciao for now.

Now the truth comes out- I’m sure you used the 120tpi folding version of the Knard with your carbon wheels, not the 27tpi version on the stock wheels. This effectively boosted the claimed weight savings by over a pound, or ~25%. Were the same rotors/cassette used, or were those switched to lighter versions as well?

At minimum this should have warranted an asterisk, e.g.
*5 lb. weight savings includes switching to Kevlar bead tires

Did I read that right? I could use these rims on my standard 29er? Sweet, sweet floatation, here I come. Hopefully we’ll be able to get these in our shop soon!

You save 40g of tape, but add how many grams of latex boogers in all those nooks and crannies?

Just tested them on a Krampus saturday: incredibly light in all senses, less gyro effect than my 29er rims with 2.1 and while I expected more drag uphill, I ended up with more ease and maybe a gear lower than usual (as compared to a front 29er). Much stiffer than what I used to put on tracks, but in general very precise choosing tracks and definitely a game changer in the 29+ arena! Gotta have a big piggy bank though. 😉