Pretty much an open secret from the moment when we saw their original enduro bike, Privateer is back with the new 141 – an affordable alloy trail bike with aggressive all-mountain leanings. We’ve had the exclusive opportunity to ride the upcoming 141 on our local European singletrack & bike parks for several weeks this summer… And it has left me wanting to ride steeper, more technical trails with its EWS-inspired ride… Privateer bikes have scaled back their 161mm alloy enduro race bike into something a bit more manageable for the bulk of us who don’t have aspirations of lining up for an EWS race start. Brought down to a more all-around trail-friendly 141mm of rear wheel travel, this aluminum 29er uses the same plush, progressive four-bar suspension design to make for a truly capable mountain bike for almost any terrain. And it definitely hasn’t forgotten its gravity racing origins, remaining perfectly capable of full days in the bike park… just as it is equally comfortable pedaling singletrack all day.

Privateer even says they expect to see the occasional rider put it through its paces for some enduro racing, as well, which doesn’t surprise me after spending time on the new bike. There’s no denying that the 141 is a capable bike after having ridden it, and looking at the numbers gives a sense why that is… a large part going back to it evolving out of a bike designed for EWS racing. While it gets 20mm less travel than the 161, its head angle only steepens by 0.5° and it gets the same size-specific chainstay lengths as the bigger bike.

The 141 shortens up both stack & reach, just a few millimeters over the enduro bike for a slightly more versatile ride. Interestingly, the effective seattube angle actually slackens out too, as you are probably likely to spend more time pedaling on this bike – both up and down hills.

Again like the enduro bike, the 141 trail bike gets 29″ wheels for the three largest sizes, and 27.5″ wheels to maintain the same ride without compromise for smaller riders.

Based on a 150mm travel, 562mm axle-crown fork (the Lyrik, according to Privateer), the 141 takes the pretty common step of pairing a 1cm longer travel fork to a progressive Horst-link suspension design. With early support that tapers into a steadily decreasing linear leverage ratio and paired to the piggyback air shock, the 141 gets a pretty bottomless feel to its ride.

It’s effectively the same kinematics of the 161, scaled back for the shorter travel, maintaining much of the same feel. Surely there is less travel than a proper EWS enduro race bike, but it still left me with the feeling of punching above its weight vs. what I first expected from just 141mm of rear wheel travel. “When we launched the 161, many riders loved the concept but wanted something more versatile. We listened, and here it is, the 141. Built to handle everything from your local trail loop to park laps, or even an Enduro race or two. Taking our proven platform and stretching out the climbing position slightly gives riders more room to enjoy those long, undulating climbs…

The 141 is ready to ease you to the top with it’s steep climbing position, whilst it’s progressive geo will let you focus on the next chute, tight switch back or fun side hit on the way back down.

Who said versatility has to be boring?”

Much like their first bike, the 141 is a made-in-Taiwan 6066-T6 alloy frame, welded from a carefully selected mix of stock hydroformed tube shapes, and Privateer’s own key forged & machined elements like its unique suspension pivots, chainstay yoke & the one-piece rocker link. Their concept from the beginning continues, developing extremely capable mountain bikes at prices that won’t break the bank. You aren’t getting the lightest frame on the market, and not necessarily the cheapest either. But the 141 delivers a truly capable ride, with well thought out details like tidy external routing clamped along the top of the downtube, internal shift cable routing through the chainstay to keep it protected, cable guides on the side of the headtube that eliminate rattling or cable rub while also not getting in the way of the occasional race number plate, plus internal dropper routing. Interestingly, the 141 frame isn’t really meant to be any lighter than the longer travel 161. Privateer figures it’s going to be your individual build that is going to result in a lighter complete bike, while they still wanted to make the 141 frame able to stand up to the same abuse. What does that mean for frame weight?

A large frame without shock is probably around 3.5kg/7.7lb, making it relatively heavy if you stack it up directly to a typically less-capable 140mm 29er trail bike… but reasonable for an alloy all-mountain or enduro bike. Now, my actual first impressions of riding the new Privateer 141 are of a bike that is significantly more capable than I had originally anticipated. While it is easy enough to pedal around on rolling trails and even totally fine on extended climbs, this is a bike that wants to jump off of things and barrel full-speed down technical trails. Living in a place with half a dozen great, but not exceptionally tall bike parks within a two-hour drive, I’ve essentially accepted that it doesn’t really make sense for me to get a proper enduro bike. Bikes with 160-170mm of travel are a blast to ride when there is a lift or shuttle to minimize climbing time. But I have plenty of technical trails close to home that I ride to every week. And I need a bike that doesn’t feel like a slog on the 20 minute bike path to the proper singletrack, and won’t sap all of my energy (and fun) on a 10 minute long climb.

And the 141 seems like a happy medium here. A light wheel and trail tire combo can surely make it feel great for all day riding – both climbing & descending. But, I also need something versatile. All those lift-served trails are fun, too. So what I’m usually hunting is a more versatile trail bike, that can do occasional double-duty when my wife and (increasingly) my kids convince me to head to the bikepark.

Besides plenty of mid-week singletrack with climbs I had to pedal up, in just about a month’s time I put the 141 through its paces at four or five bike parks. The bike & I got carried to the top by a couple of regular 4/6-person chairlifts, some super sketchy old single-person chair, a J-bar nicely converted to pull me by the stem, and a T-bar precariously jammed behind the seatpost. 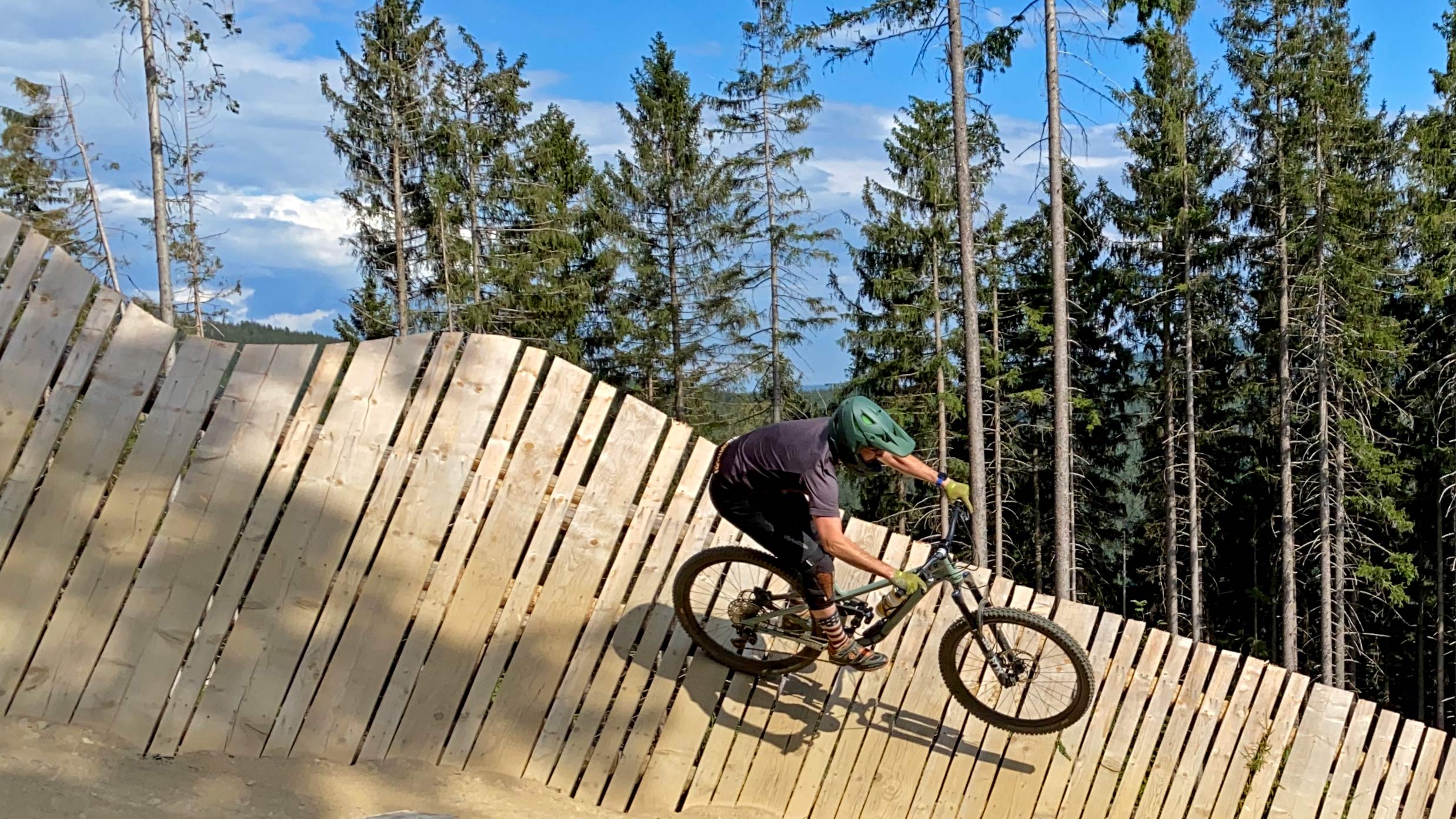 All of those local uplifts meant tons of time wracking up kilometers and vertical meters of descending, riding the 141 hard on both smooth trails and technical enduro & DH race tracks, with a healthy dose of bridges & wall rides thrown in for good measure. The takeaway…

Paired with a 150mm travel Fox 36 fork, the Privateer 141 has simply outclassed other similar travel trail bikes I’ve ridden recently over similar terrain. Instilling confidence on the steepest trails and over the biggest jumps & drops, the enduro-inspired geometry provided a solid platform for me to work on my technical skills, and even overcome some of my mental blocks over gaps. While this isn’t some super fancy carbon super-enduro all-mountain bike that I would think I might lust over, this is a bike that I felt sad when I had to return. As I boxed it back up and handed it off to DHL for its journey home to Privateer, I was already thinking how I would tweak the complete spec to build the bike exactly like I would want… Like the 161 before it, this new 141 is being offered by Privateer with a moderately long pre-order period – and again in either a frameset or single complete bike option.

The £1489 / $1759 / 1739€ frameset option will be the quickest way to get the new bike. Including the alloy frame in raw aluminum, painted Charcoal Grey or Heritage Green, you also get a Fox DPX2 Performance Elite shock & sealed headset, and they’ll be ready to build the bike up starting in November 2020. That’s pretty close to the same complete build I tested, although I was riding Hunt Carbon wheels (which claim to save just 50g over the Trail Wides). My complete bike weighed in at 16.01kg with a set of 480g Crankbrothers Mallet DH pedals and sealant in the tires – so let’s call the actual Large P3 bike 15.53kg/34.24lb. Cool bike definitely. My aspirations for 2021 are to do a few Enduro races. I feel this bike would work just fine for a few enduros instead of the 161. Think so Cory?

Since when 3500€ are affordable for the majority of people ? Polygon are offering a more affordable and still as desirable bike with their siskiu t8.

wait, is this an Ellsworth Moment with updated geometry but made overseas?…