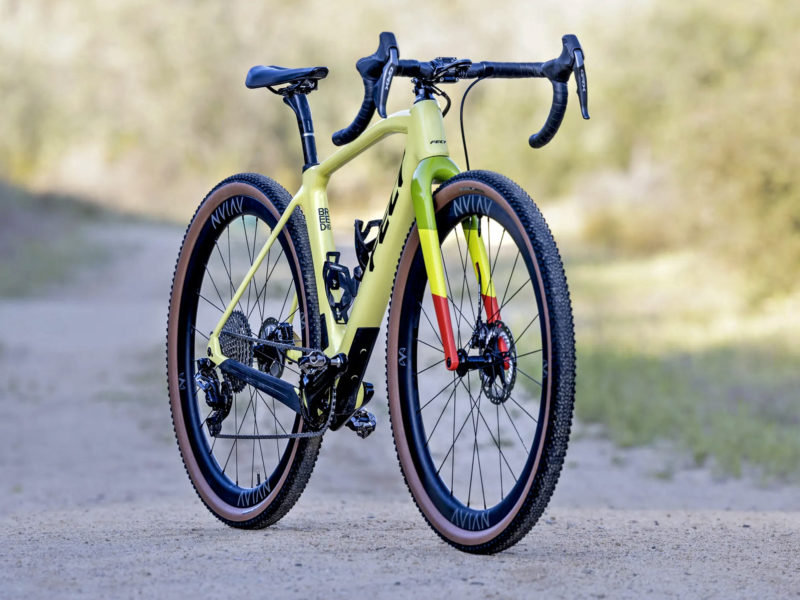 A new Felt Breed Carbon gravel bike aims to reset the stage for the California-based bike maker as a brand obsessed with speed. Mixing up a bit of their aerodynamic specialty, carbon design expertise, and race-winning mixed-surface capabilities, the new Breed is a fast gravel bike that hits a nice balance of big tire clearance, precise road-inspired geometry, and enough mounts to haul everything you need for endurance racing.

Felt has a bit of a new look since its acquisition by motorsports parent group Pierer Mobility, something they describe as sharper. And while much of their corporate parent now focuses on e-bikes & power motorbikes, the new Breed Carbon is just a straightforward gravel race bike – no extra power other than what your legs can put in. 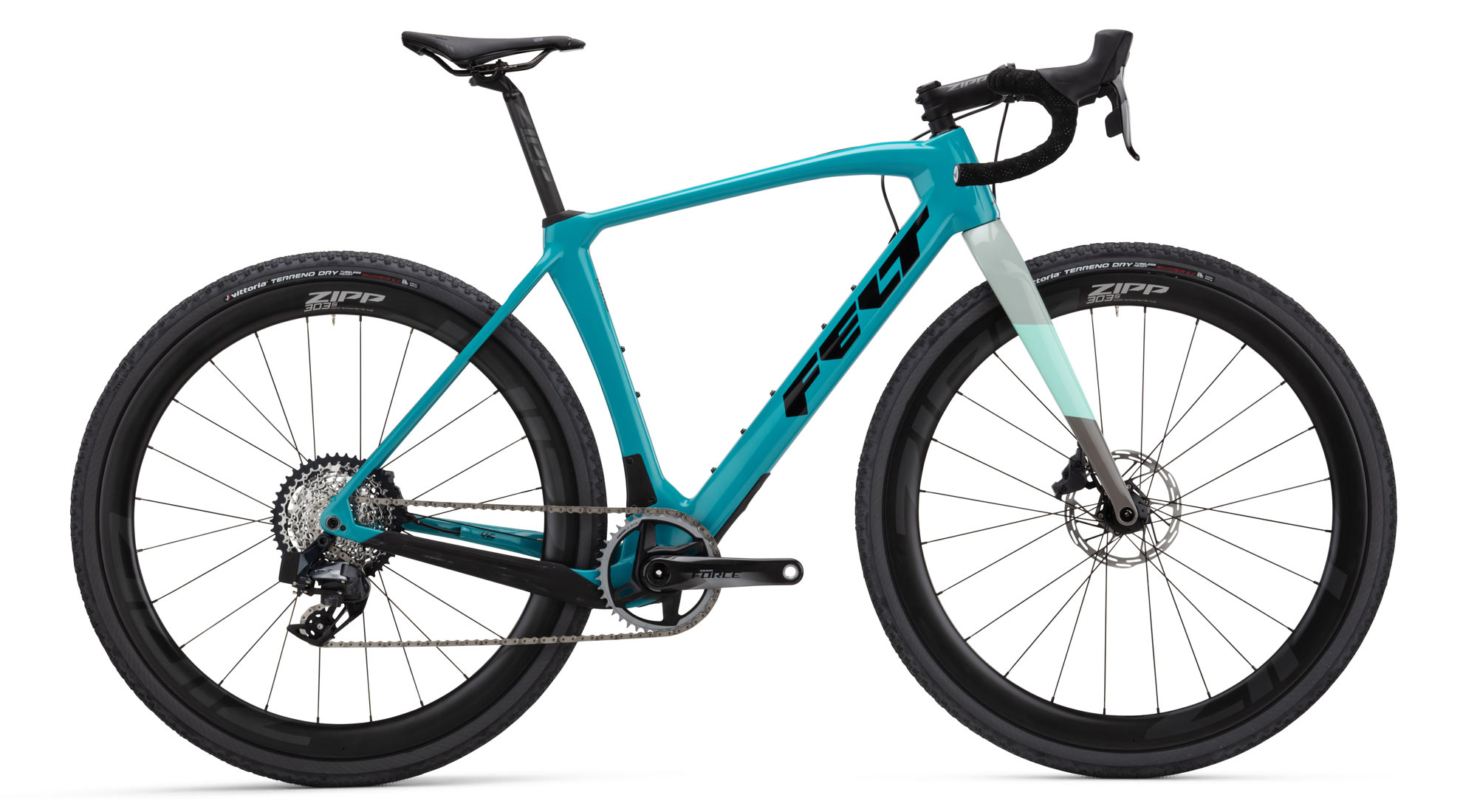 The new Breed Carbon is a gravel bike built just to go fast, whether you race it is up to you. But while some new gravel bikes aim to be scaled down mountain bikes for adventuring, Felt took a bit of the same DNA that developed world champion winning triathlon, track & cyclocross bikes, and took their versatile Breed gravel platform to the next level. 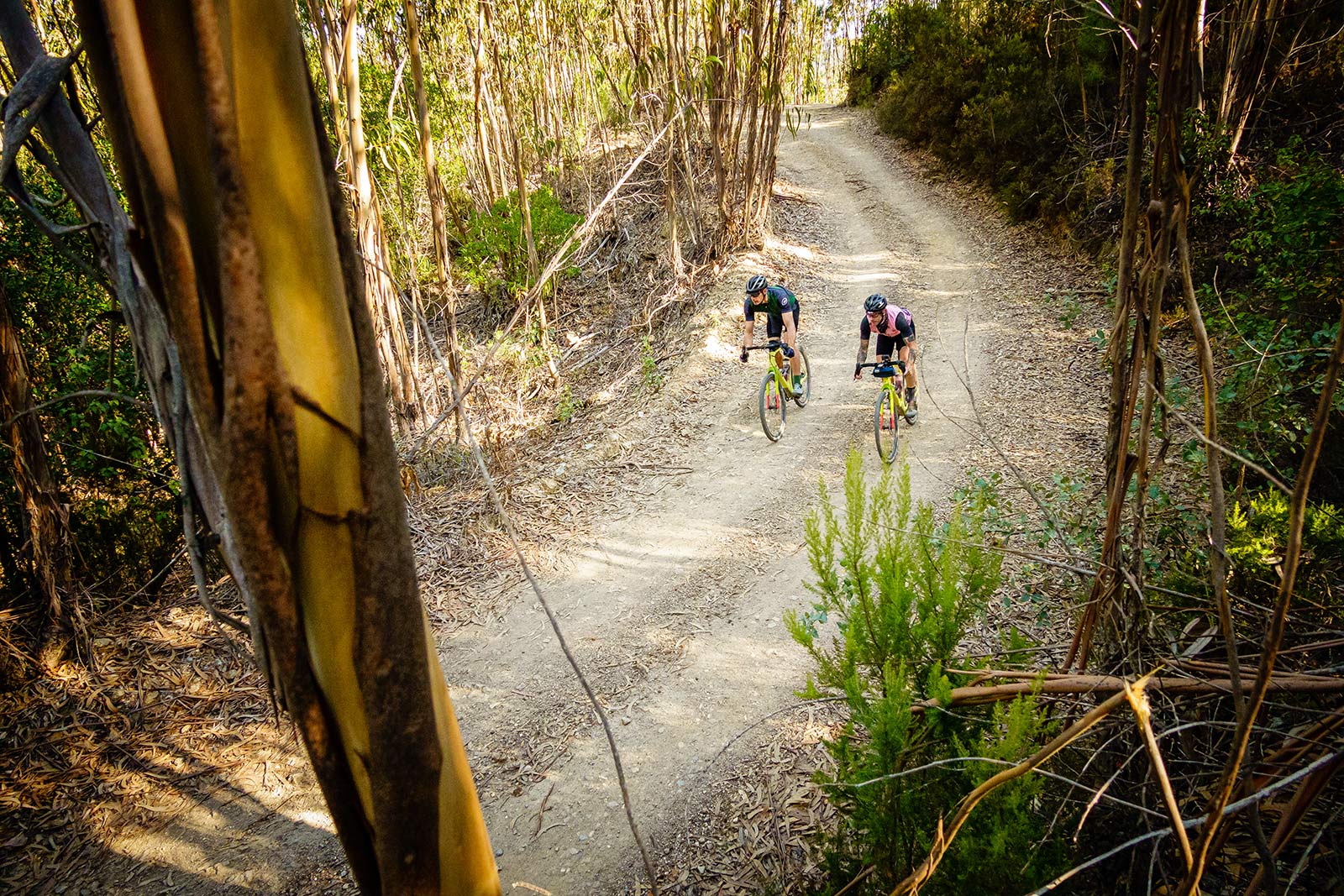 You don’t have to race it though, we just spent a week exploring new ground in Portugal with Thomson Tours, appreciating the quick ride of the new carbon bike – incognito of course, as much as you can on fluorescent yellow bikes!

Felt builds the new bike with an agile ~1100g carbon frame made in China, assembled in Taiwan, designed around “gravel race geometry”. To them, that means starting more with road bike-like handling, adapted for increased off-road stability with longer 430mm chainstays, only slightly relaxed head angles, and a bit more upright fit. 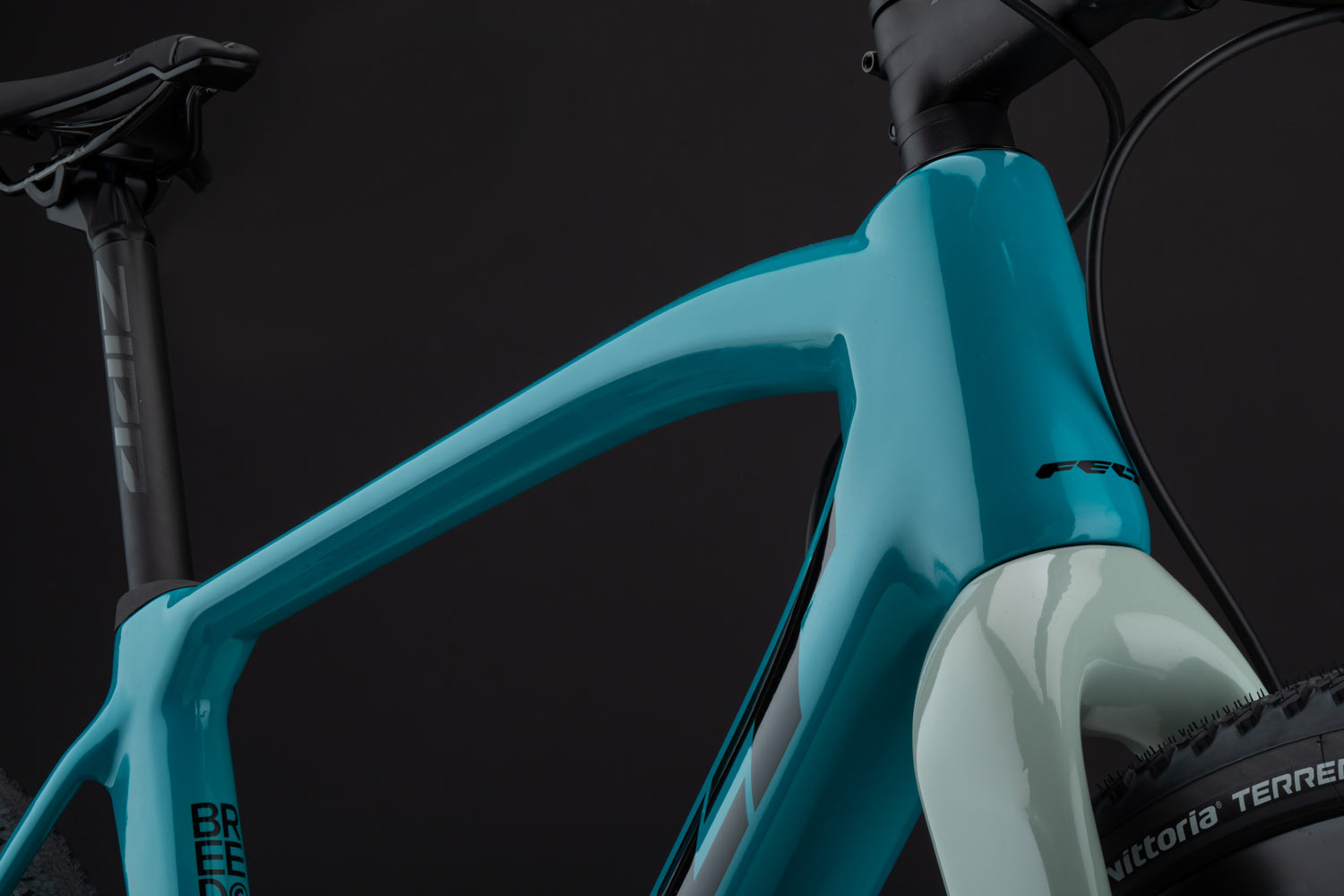 Part of that gravel geo is also a longer 420mm axle-to-crown fork with a noticeably taller fork crown, built to accommodate a short-travel gravel suspension fork for those riders & racers looking to get a bit more rad off-road. 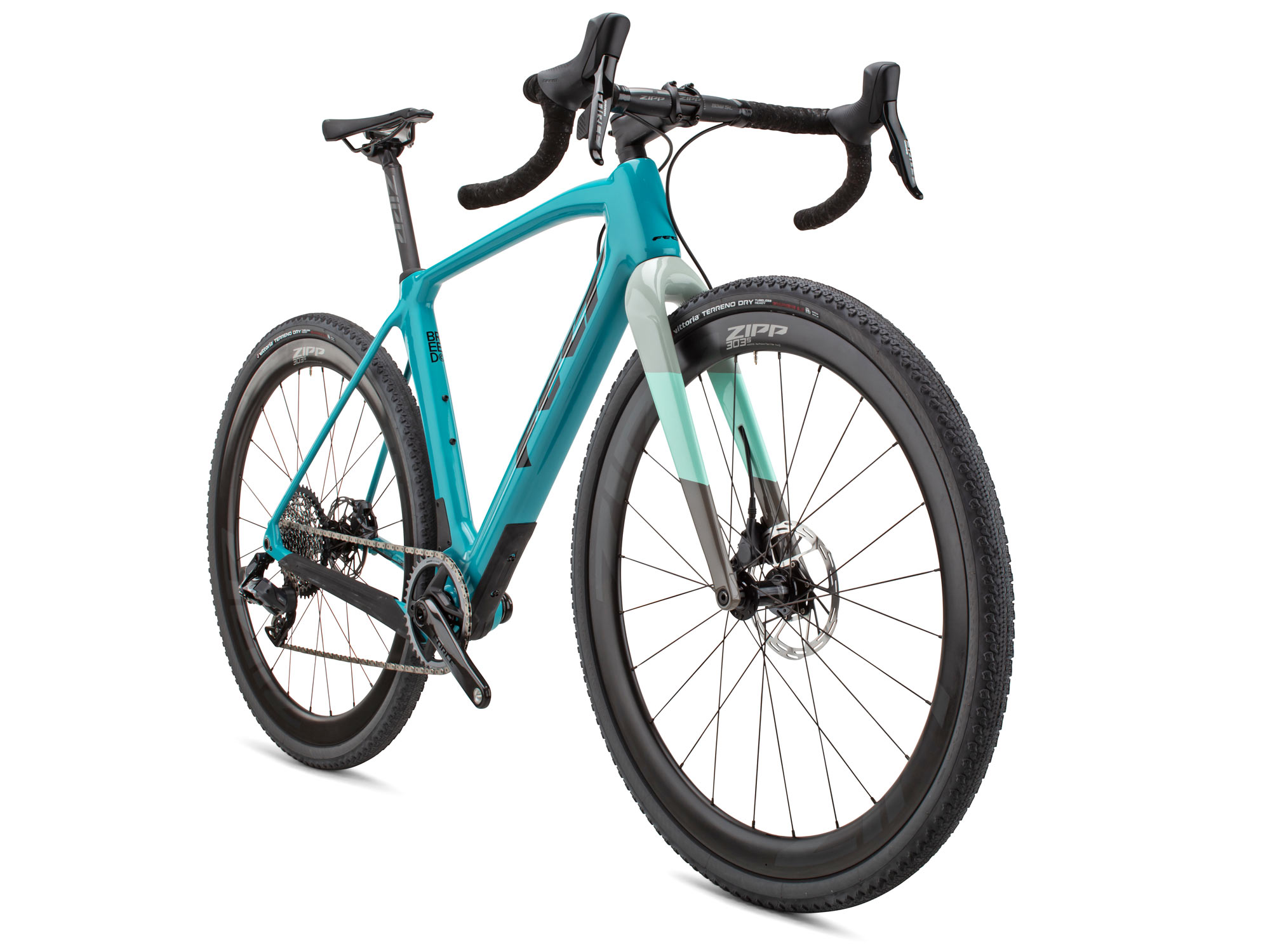 The bike is also aerodynamically optimized with boxy tube shapes, a close rear wheel cutout, and wide-set seatstays. But it makes its aero gainz within pretty conventional-looking shaping, nowhere near the recent crop of aero road-inspired gravel bikes. 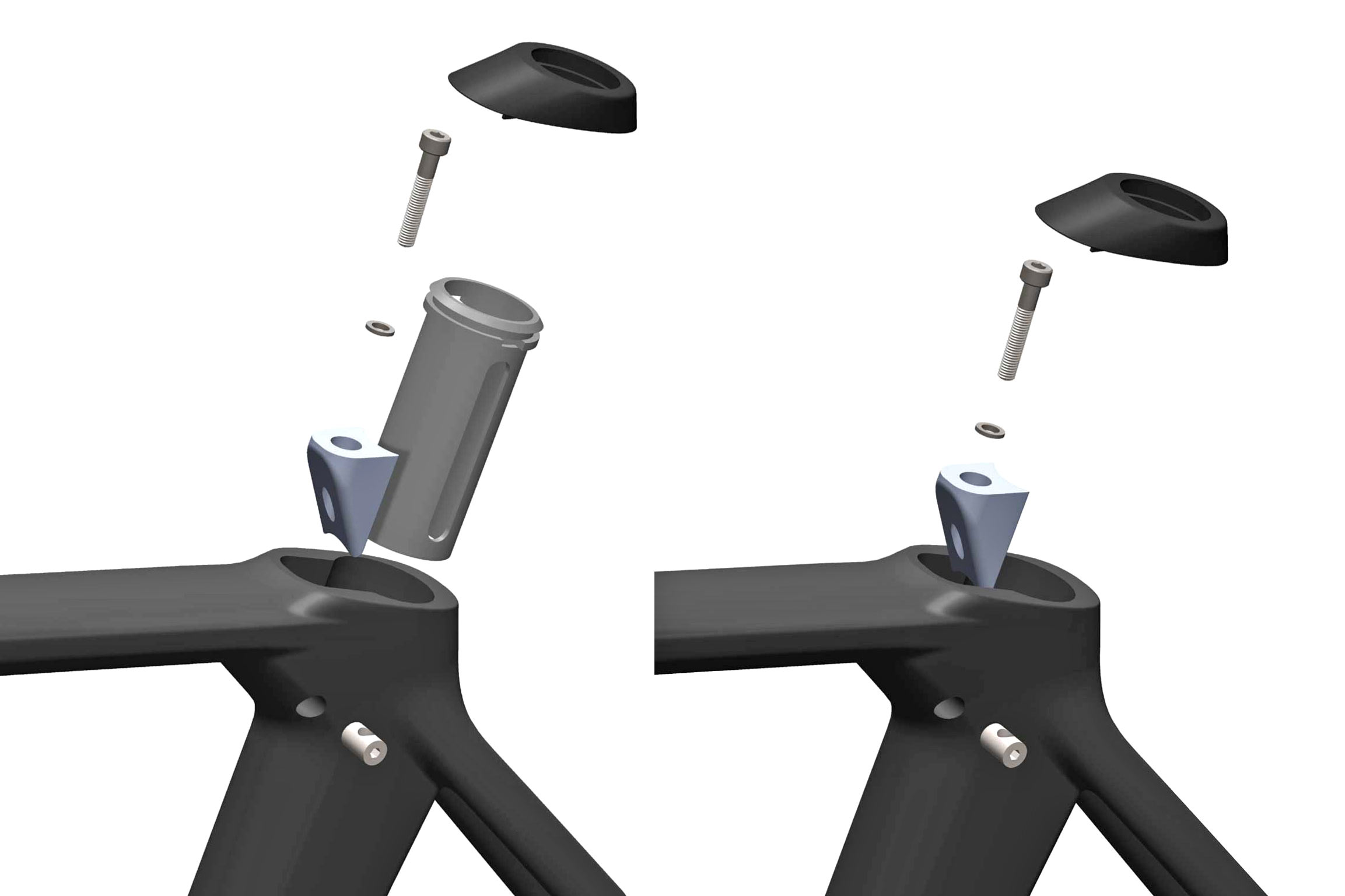 One truly unique element of the new Breed Carbon is its TaperLoc seatpost system. Clamped with a regular-seeming hidden wedge-style clamp, the new Felt can fit either a 27.2mm or 30.9mm seatpost. The smaller diameter post sits within a proprietary, vibration-damping sleeve inside the frame to eat up some vibration before it makes its way to the saddle. Or those preferring a more rigid ride can swap in the larger diameter, stiffer post. Combined with stealth internal routing, it also means you can fit almost any dropper seatpost to get down for steep descents – either 27.2 or 30.9. 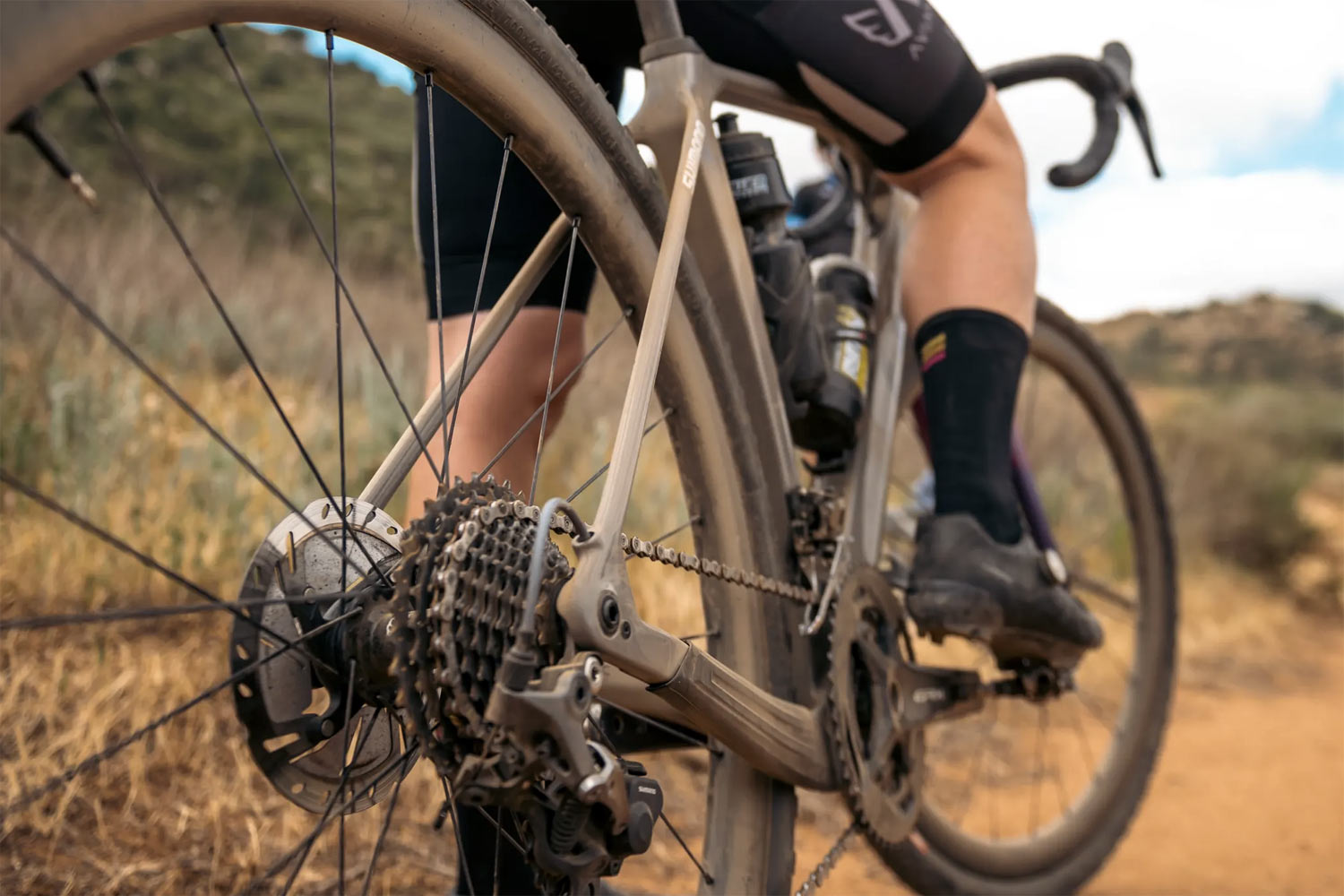 Tire clearance is quite big on the new Breed Carbon to venture further off-road. Bikes will be spec’d with 38-40mm tires, but there is ample space for 700c x 50mm or 29 x 2.0″ tires (but with more road-style 4mm clearances all around that accounts more for dry conditions riding).

Curiously, Felt also says 650b x 2″ tires fit too, but will certainly change the overall handling of the bike.

Eds. note: For comparison’s sake, most bikes over a 28mm tire use a minimum clearance of 6mm in all directions, based on ISO-4210 standards. It seems like a minor difference, but that would likely equate to the Breed Carbon effectively having a real max 46mm tire clearance in either 700c or 650b wheelsizes. 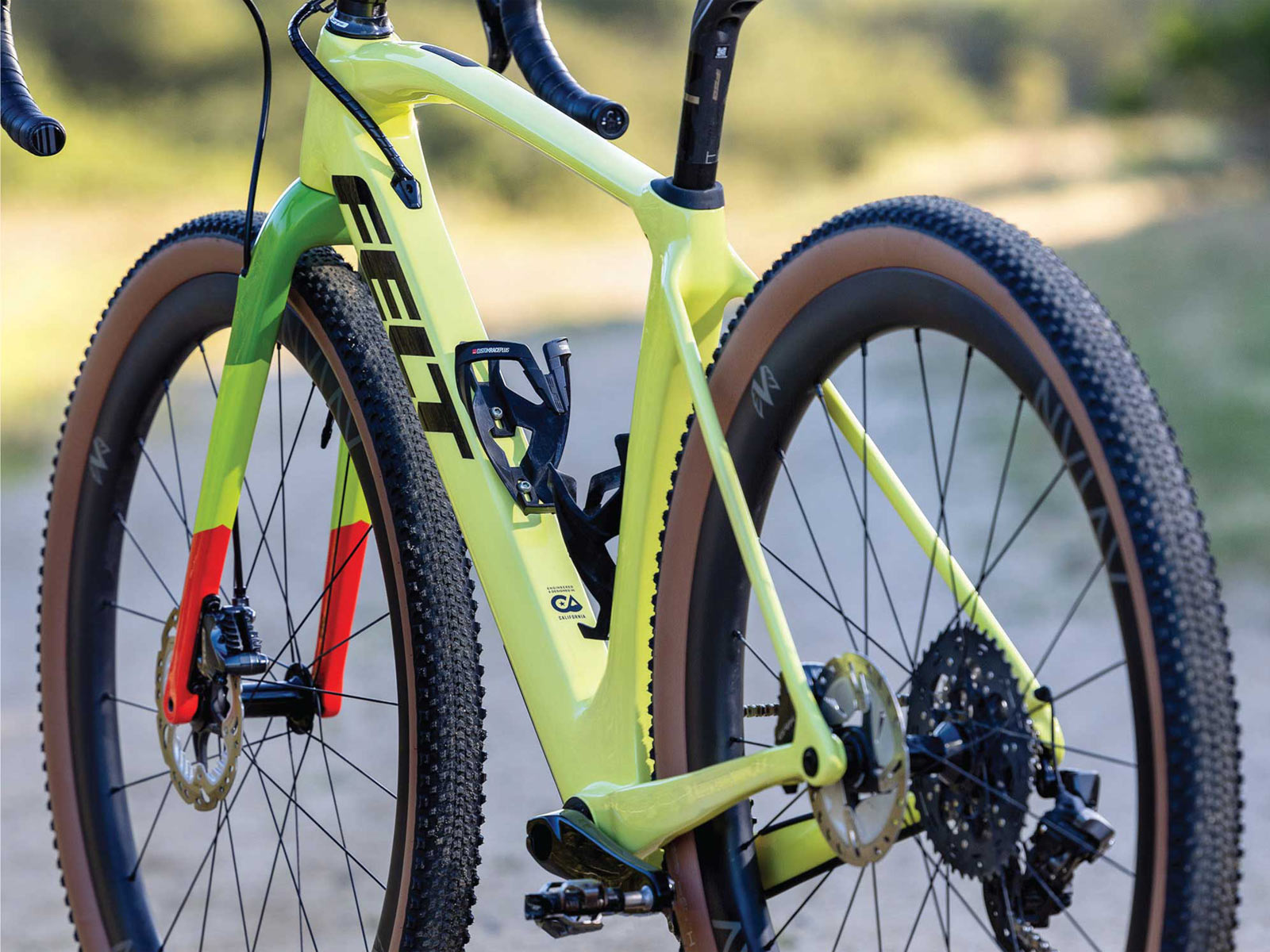 Into the details, the Felt Breed Carbon gets a new-standard T47 bottom bracket, almost. Felt actually opted for t47 threads spaced normally on the non-driveside, but spaced wider like a 386EVO on the driveside. The asymmetric bottom bracket is a mix unique to Felt for now, but not actually any proprietary parts (just an internal vs. internal mix & match, curently from Praxxis & Token). Plus, it should work with any cranks while allowing big tire, big gears, and big stiffness. 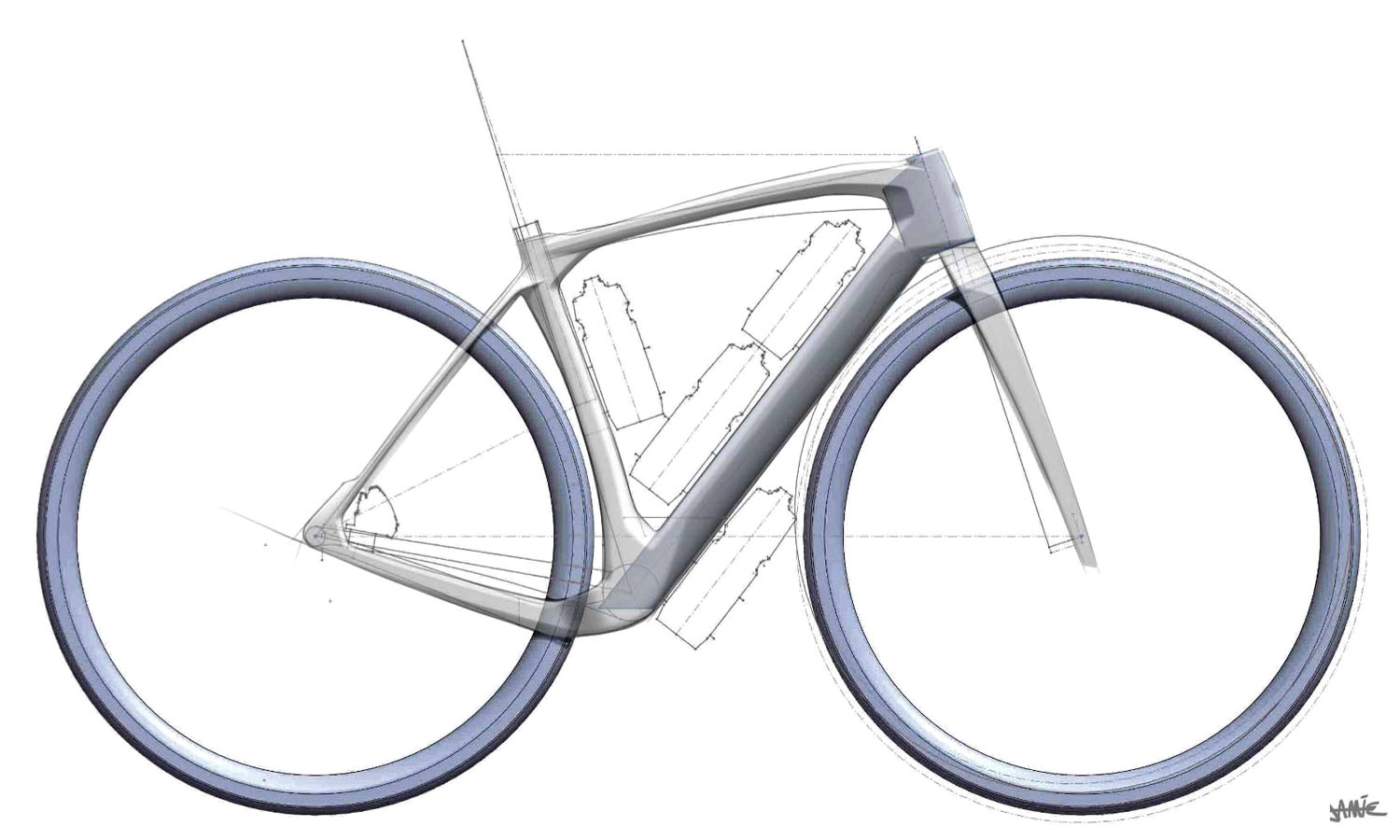 The new carbon gravel race bike gets lots of mounting options in the frame (just none on the fork). Most frames feature two pairs of cage mounts on the downtube, a seat tube mount, another cage mount under the downtube, plus a recessed/hidden toptube mount. 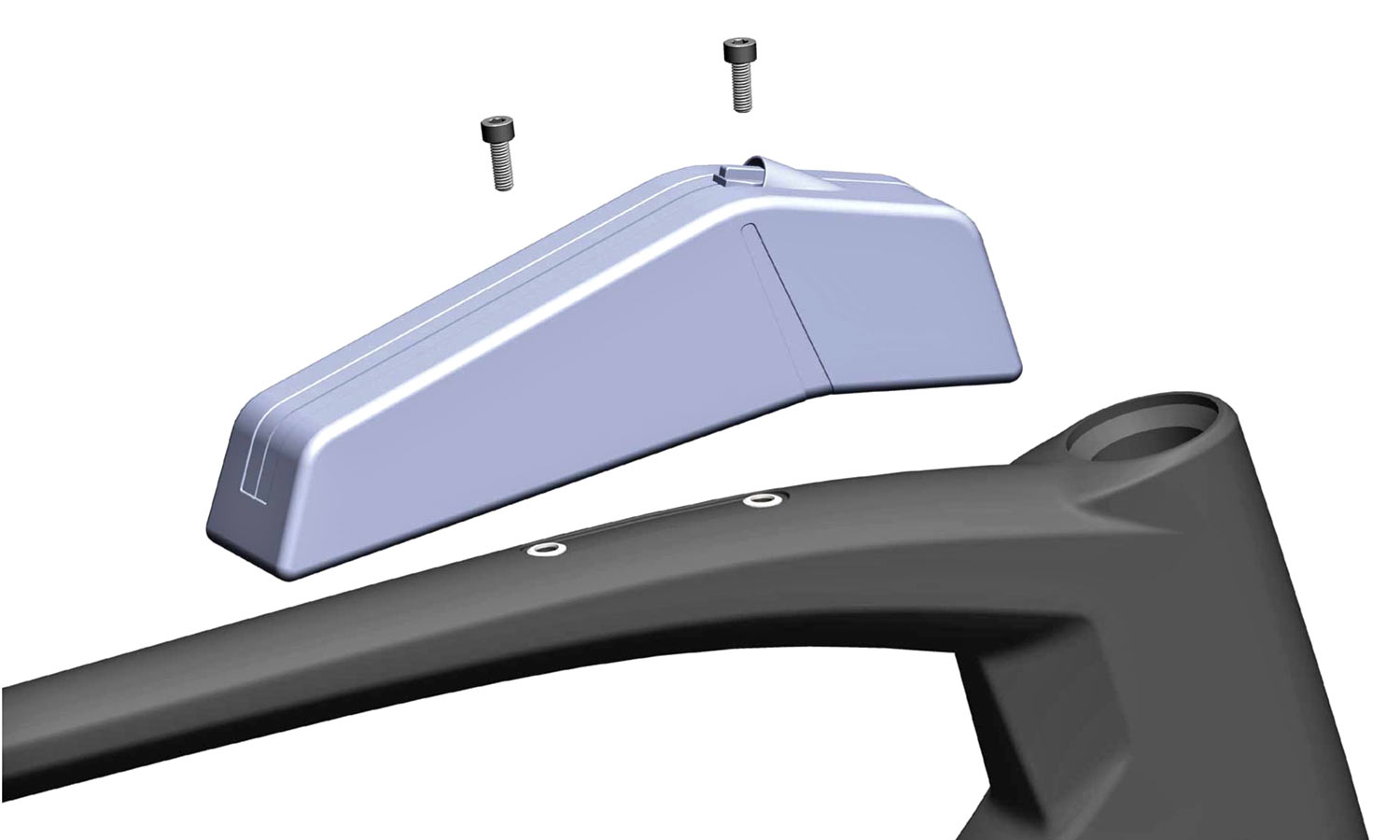 Felt even says they have a special bento storage box in the works for more neatly-integrated, easy access mid-ride nutrition & spares. 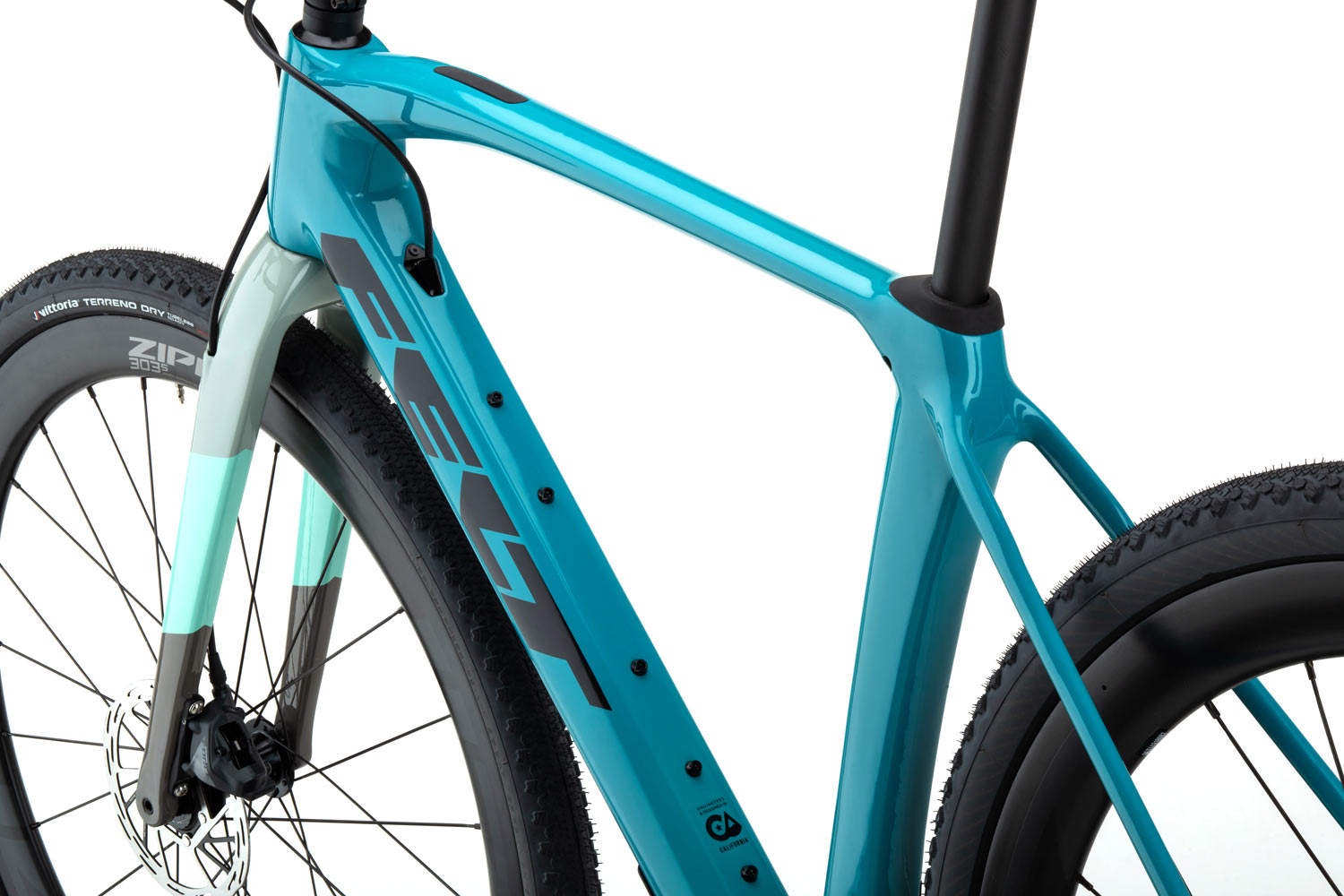 The frame does stick with conventional (visible) modular internal cable routing, and it can be built up 1x or 2x (with really big chainrings – 52T & 44T small ring, respectively), electronic or mechanical, thanks to a replaceable front derailleur mounting bracket. The carbon gravel bike also integrates molded rubber downtube, under bottom bracket & chainstay protectors to keep it running quietly and protected against errant flying gravel. 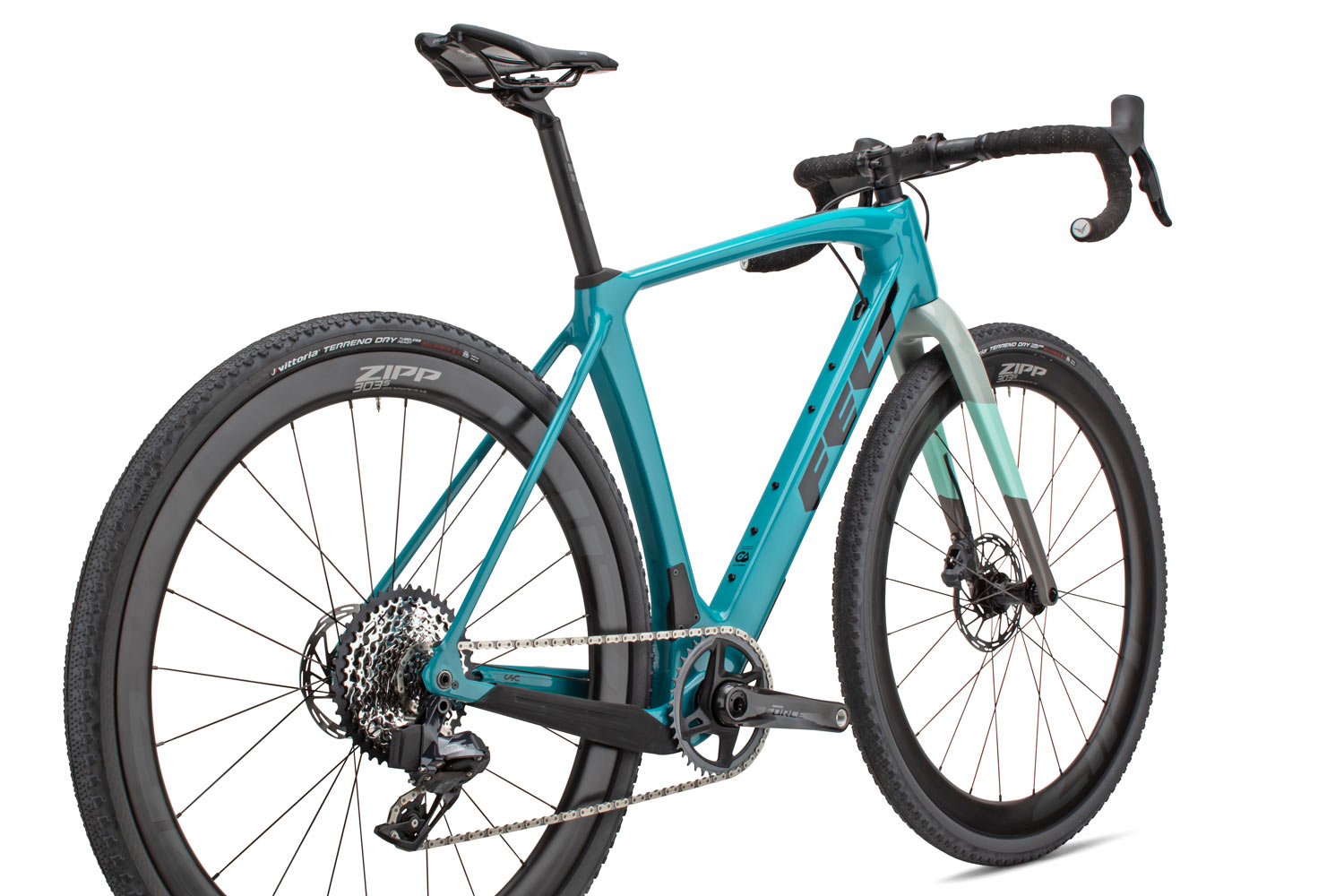 Other than that, the bike sticks with standard 12mm thru-axle spacing, flat mount disc brakes, and a tapered 1.12501.5″ carbon steerer tube. 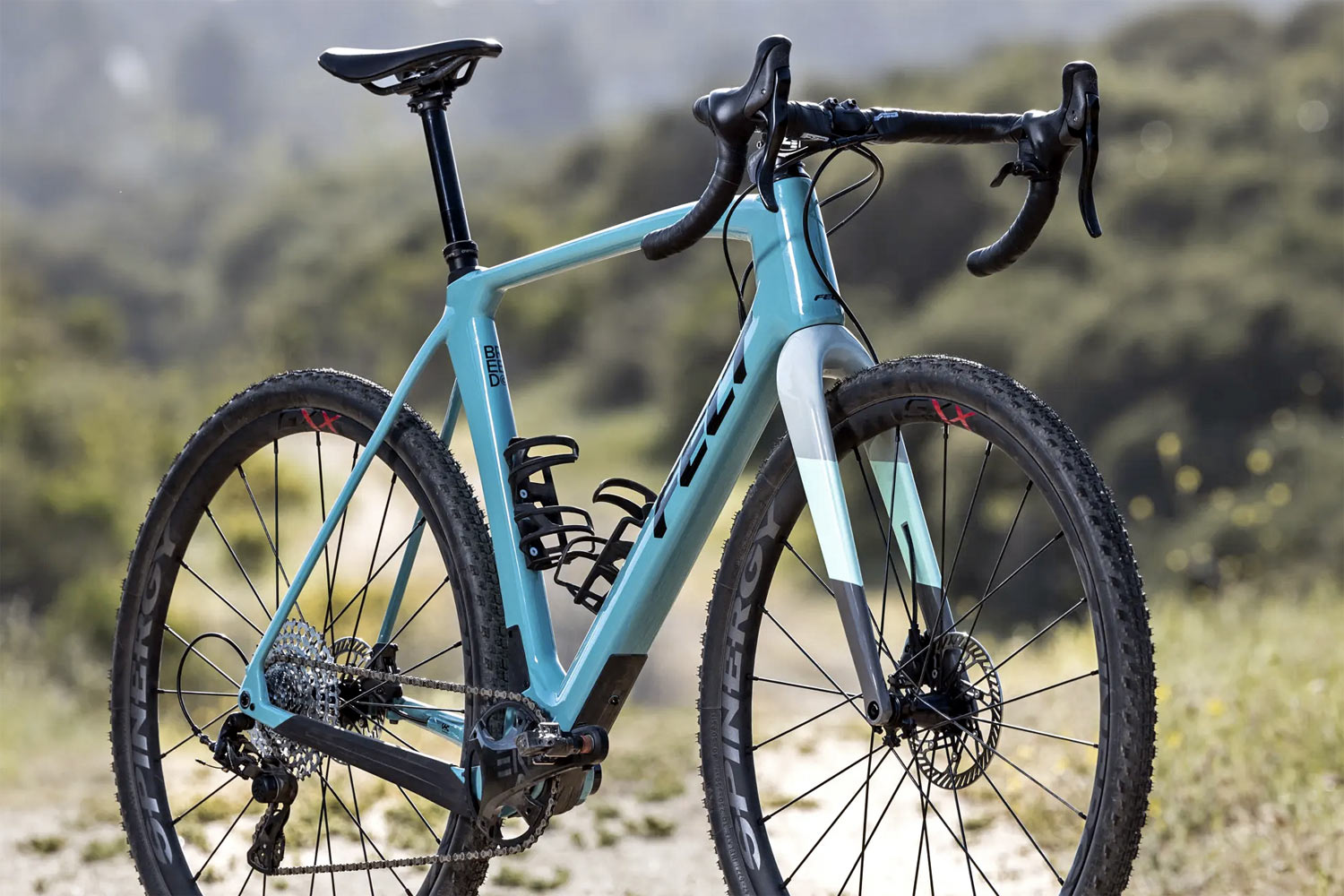 Felt’s new Breed Carbon Advanced gravel race bike will be offered in a range of builds in six sizes, plus a $2500 frame kit for cyclists who want to create their own dream build. 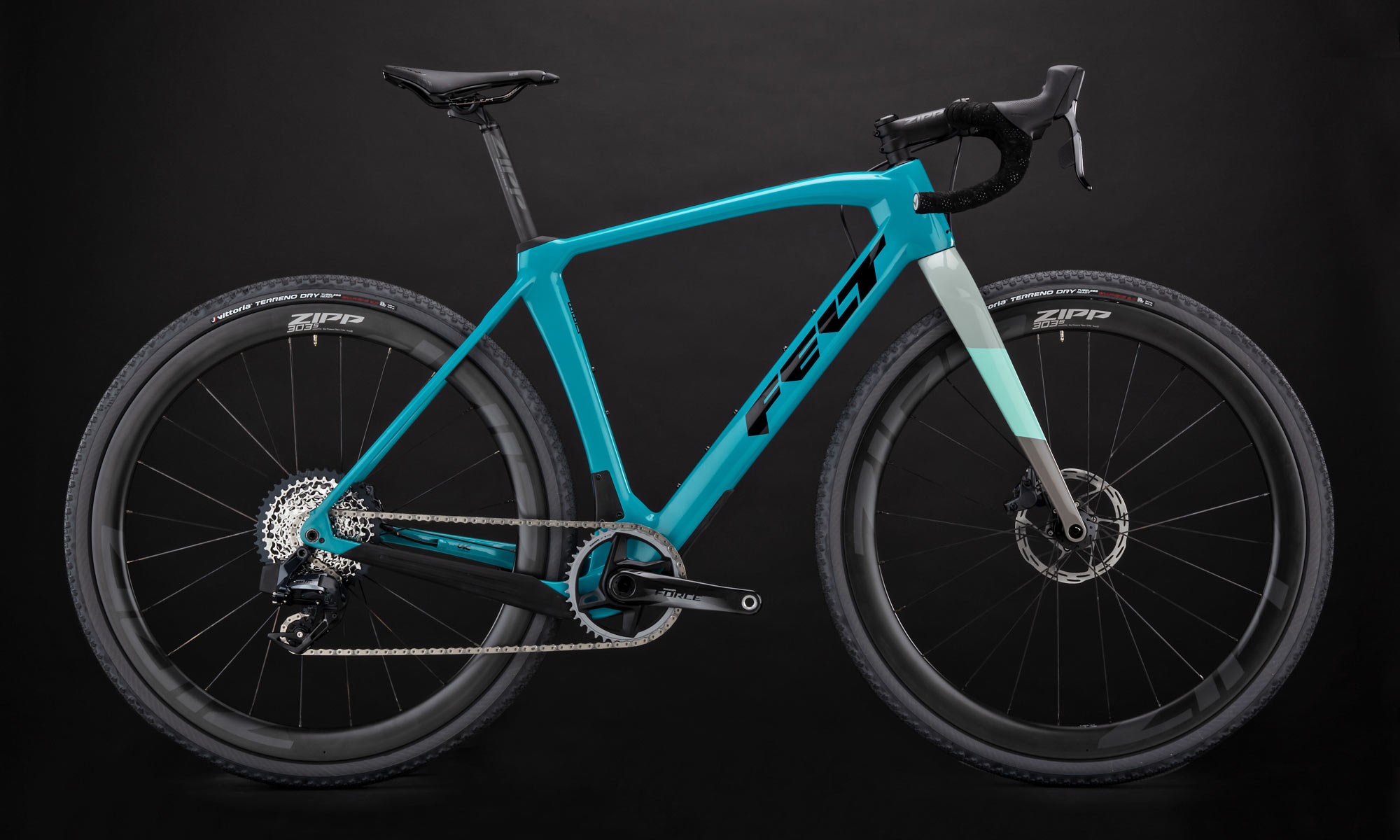 Get in touch with your local Felt bike shop to figure out how quickly they can get you on a new Breed Carbon. Officially they are model year 2023 bikes, but Felt assures that framesets will be available in limited numbers later in this year (autumn/winter), with some SRAM complete bikes expected, as well.

That modular seat tube design with the dampening sleeve option is pretty darn clever. Might even be able to combine the sleeve with a 27.2 mm Thudbuster or ShockStop seatpost for even more cush at the back.

It’s hardly a new idea though. The Pivot Vault has had a very similar design for a number of years.

The FR and FX models take cables internally at the headtube and as far as I know there haven’t been problems or complaints. Don’t change what isn’t broken comes to mind. I guess they are thinking most will go electronic and then the headtube remains more attractive.

The seatpost clamp is not “truly unique”. Pivot had had the same for a few years now.

Wow, this checks a lot of boxes.

Copy of my Cervello.