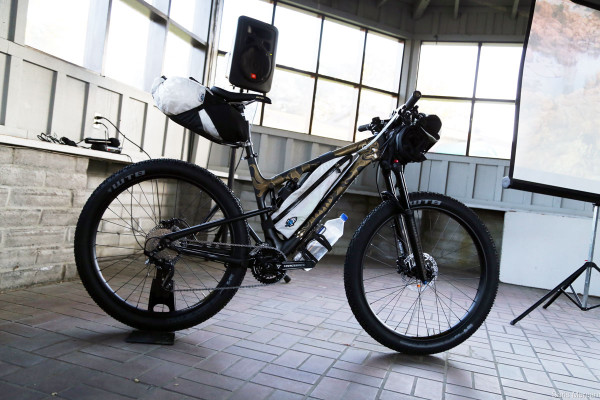 Last year, in the true spirit of one-off show bikes, Rocky Mountain created a stunning hand built concept they called the Sherpa. Designed around a prototype WTB rim, the bike was designed to take you the kind of places where you’d probably need a GPS beacon.

Based upon all of the media attention and consumer feedback, Rocky spent the past year refining the concept, and will be making it available to consumers starting next month. Head past the break to see how they did it: 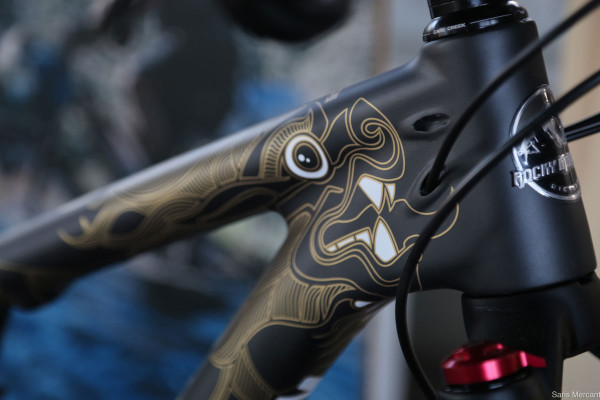 The paint scheme was inspired by the himalayan snow lion.

Calling the Sherpa a mid-fat trail bike would be missing the point, which is why they’re using the term “overland” to describe it’s capabilities. Think gravel grinder, meets fat bike, meets a party in the woods. To get there, Rocky has combined 27.5+ wheels, 90mm of rear travel, a 120mm fork, and a wide gear ratio. 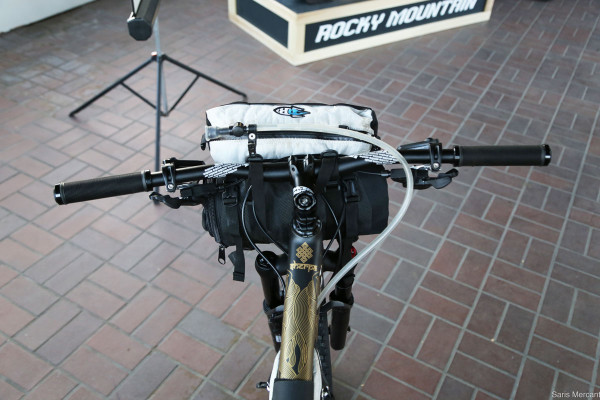 The inspiration for the project came from talks with WTB, when the company shared some drawings with Director of Product, Alex Cogger. Buried deep within that stack of sketches they sent was an ultra wide 27.5” rim.

This concept intrigued Alex, because there were no tires that existed for this category yet. After some prodding, he was able to get his hands on prototypes, and set to work on developing a bike he always dreamt of making… 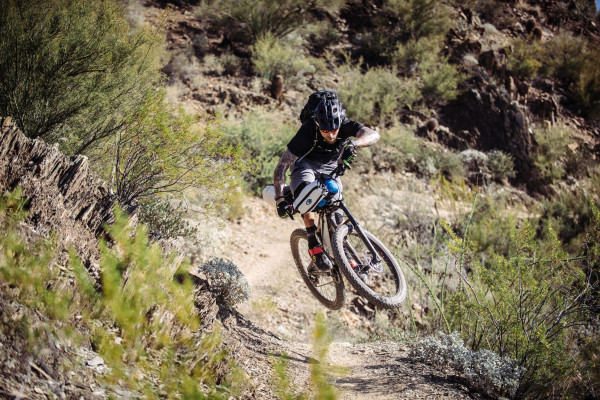 As a rider with a passion for undulating single track, and all the adventure that takes place in between, Alex had found that the existing mountain bike tires needed to be inflated to sketchy levels to deal with the additional weight of camping equipment. Using something like a “mid fat” tire, combined with suspension, allowed him to build a bike that was capable of being loaded up – but still fun to rally. 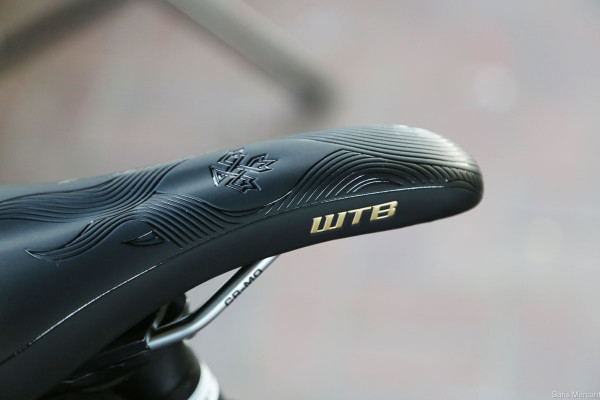 For the production Sherpa, Rocky utilizes a modified carbon Element 29er front end, combined with an aluminum rear. The rear of the bike has 90mm of travel, which has been mated to a 120mm travel fork up front, which gives the bike a more upright rider position and dials in the handling. The bars and stem also have some rise, which gives the rider a more comfortable seating position for long grinds, and allows them to enjoy the scenery. 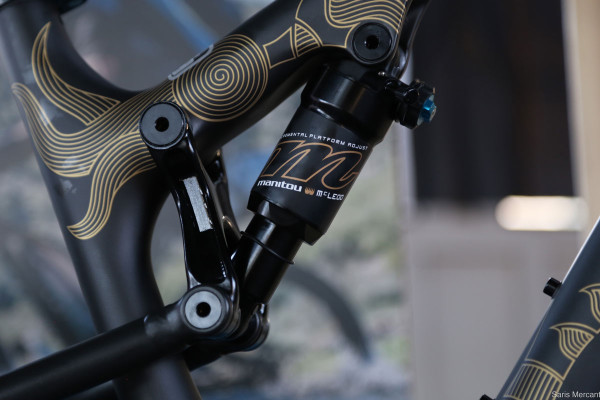 One of the other challenges behind using a traditional suspension mountain bike to tour is that the total weight of the rider plus gear often requires inflating the shocks to their max levels. For the production Sherpa, Rocky teamed up with Manitou to work on a low volume air system.

Both the McLoud shock and the new Manitou Magnum that are spec’d require significantly less air than their competitors, which offers major performance benefits to the fully loaded overland rider. 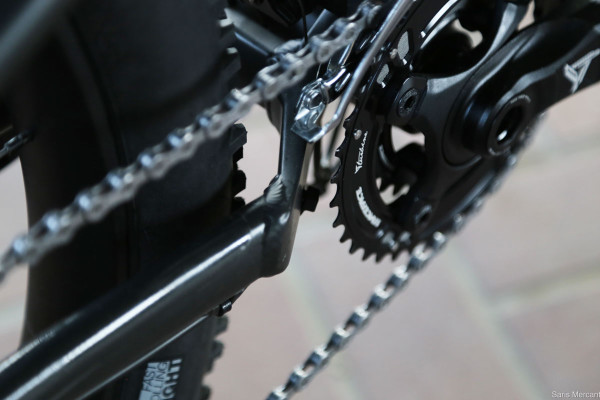 To make the bike more versatile, the company went to great pains to make it compatible with a front derailleur. Part of the not-so-secret recipe is a custom 83mm spindle for the Race Face Turbine crankset, combined with a 142 rear end (which was chosen in part because it’s more readily available globally than 148), to fit upto 3.25″ tires, and still have good chain clearance. 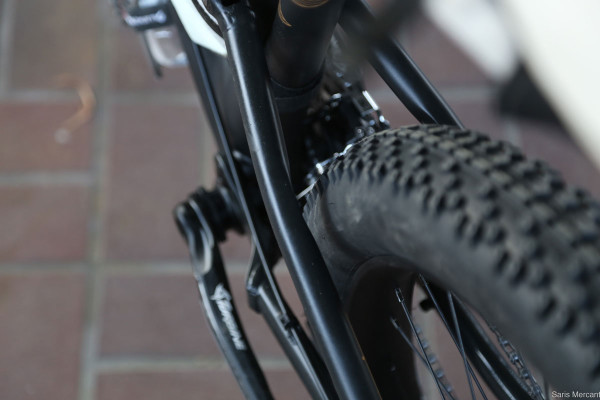 Retail for a complete bike is $4,499 USD and we’re told the real world (no bullshit) weight for a size medium is 29.5 lbs. The company does not intend to offer a frame only option in the near future, but that could change depending on sales numbers. 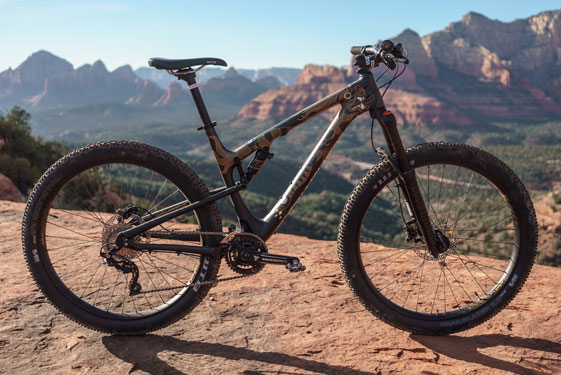 When the Sherpa was shown as a prototype last year, it was a complete one off, but it’s amazing how new products have been introduced over the past twelve months which have helped make it a production reality. For the rider who likes to explore the paths less traveled, and still get shreddy, this may be the perfect traveling companion.

Super, super cool- very impressed by the thinking and execution on this bike!

I just wish they’d either a) improve the spec, or b) offer as a frame only- with a full XT grupo (for example), the weight on this could get down into the range of what I want to take on long bikepacking trips whiich include lots of climbing.

I’m not seeing how a full squish bike with wide rims and tires is part gravel grinder.

” existing mountain bike tires needed to be inflated to sketchy levels to deal with the additional weight of camping equipment.” Good grief, you’re not carrying that much weight. Using that logic everyone over 175lbs rider weight without camping gear has been using “sketchy” levels this entire time? Oh the horror! Do you think they know? How can they even ride?

I agree with JBikes, it’s been obvious that larger tires have value and the “+” or “mid-fat” designation is just an excuse to claim ownership of something people have wanted forever. Honesty in sizing is what we want, not more marketing buzz.

I think once once this tire size moves out of the cellar-dwelling thinking of full rigid people will accept that it has value in FS designs. I don’t think, though, that there’s any special value in the 650B variant over 29, it’s the same argument that we’ve always had. I also don’t think ANYONE will look back and think that 90/120 travel is something they would ever want to produce, they industry always moves away from that as designs evolve and improve. Finally, the low volume shock is a really crappy way to solve that problem. I do like the paint job and the rejection of Boost though.

Banshee makes bikes with clearance adequate for this size tire and the have replaceable dropouts that allow you to go 29 or 650B. I’d wager you could easily build a bike superior to a Sherpa out of a Banshee Prime or Phantom that you’ve been able to buy for years. I’ll take a Prime over this and get a lot more effective suspension and superior rollover.

Inflating tires to sketchy levels…………..welcome to my world. I consider myself a tandem when it comes to wheel, suspension loads.

I am intrigued by this bike but Manitou? That part makes me a little nervous.

As a big boy I also thought this would sound nice to me. I guess “sketchy” is in the eyes of the beholder. But the suspension design does sound nice. I maw through top out bumpers…lol.

Manitou used to be the #2 contender in this sector. SPV was great for its time. I hope they can bring it back.

“it” as in a contender in the suspension market.

Ripnshread, I’m not little guy either (210lbs) But you’re not setting your suspension up properly if you’re “mawing” through topout (did you mean bottom-out?) bumpers. You can set up most bikes to easily accomidate 250+ riders to where you’re not bottoming out the suspension. And if you are talking about Top-out (as in, your suspension slams the top-outs when un-compressed) then you’re not running enough rebound, or you’re heavy enough that you might require a custom tune.

I’m assuming by sketchy they meant pressure excessive for the ride/traction desired.
I guess technically one could come up on the rim sidewall inflation limit for the spec’d width tire, but going to a wider rim/tire doesn’t necessarily prevent this. As tires volume increase, so does the force on the rim sidewall for a set pressure. Heavier riders or touring riders need to spec the width tire to achieve the desired pressure/ride and then spec their rim to take the force for that combination.

I also doubt any more than 20-25 lbs is being carried given the pack bags shown. I tour on a bike and with full rear panniers, I’ve never had more than 50 lbs in it (and that with extra water and souvenirs . And if I did, I wouldn’t be hucking it anywhere or over anything.

Nise to see Manitou getting some spec again, they make good stuff.

@ Fan Boy, it’s a phonetic typo or autocorrect fail, the actual shock name is McLeod after the trail building tool
http://en.wikipedia.org/wiki/McLeod_%28tool%29
Which leads to the question of whether Manitou will offer a companion fork called the Pulaski.

I think it’s pretty f_n cool. The tyre size is perfect based on my particular bike packing adventures in the desert. Speculation and criticism are good but I give it far more love than concern.

If I was going to do epic bikepacking adventures in places that need a GPS beacon, I’d rather have a Salsa Fargo. Less parts to break.

Pretty cool bike. Love the idea of a performance fatter bike for “anywhere” touring. I’m not sure about the anywhere-in-the-world execution though: 142 hubs are by no means “traditional”… Anyone who’s traveled outside North America, knows that “traditional” is still 135QR (gasp!). Even shops in less populous parts of Europe don’t stock 142 hubs, 27.5 tires or tubes, etc. Then again, he mentioned Kazakhstan – I’ve never been to the Stans… maybe they’re more up on current standards.

I’m a huge fan of this bike and it’s spec. I was not at all interested them until spending some time on a buddies krampus – such a fun bike and tire size. The manitou is awesome too – super reliable products. Most complaints about manitou are based on outdated experiences. You will likely never have to rebuild it unlike fox with moly oils that break down over time. Just ask a dirt jumper about their experience with the manitou circus.

I would love to have this bike.

The intro to that video is pretty annoying for what ever reason, so much PR BS talks

I just spent the last five weeks on the Sherpa with an overnighter on the White Rim trail last weekend. It’s a truly great bike. Keyboard cowboys will always have negatives to toss at any new bike, but this one does deliver on its promise. I do agree that calling it “mid-fat” is a stretch. It’s just a tiny bit fatter than a normal tire, but the payoff is very noticeable. I might also agree that the spec could be a tad better, but I’ll give that one a pass. I do wish it had a 1×11 drive. It would be nice to ditch the FD all together.

Haters gonna Hate but the + bikes are here to stay. Technology never stops but you can stay in the 90’s. Adios!

@Christophe well said, having some actual experience on the bike helps answer questions and give merit to the intended use of the bike. I think where they were shooting here is that this is the launch of a bike, not a tire size. The tire size is what made this bike possible and better than riding a rigid bike, or a standard mtb if you want to get the most trail riding experience in a bike-packing package.
At least spec wise, we know that adding a 42T cog and removing your FD and granny-ring 1x with good range is possible.

Super enjoyed a Medium (5’11”) @ VMBA fest at Ascutney. Ate up climbs. Shredded rocks & roots descents, railed in the berms. Confidence of fattie but nimble like a goat. Way less punishing