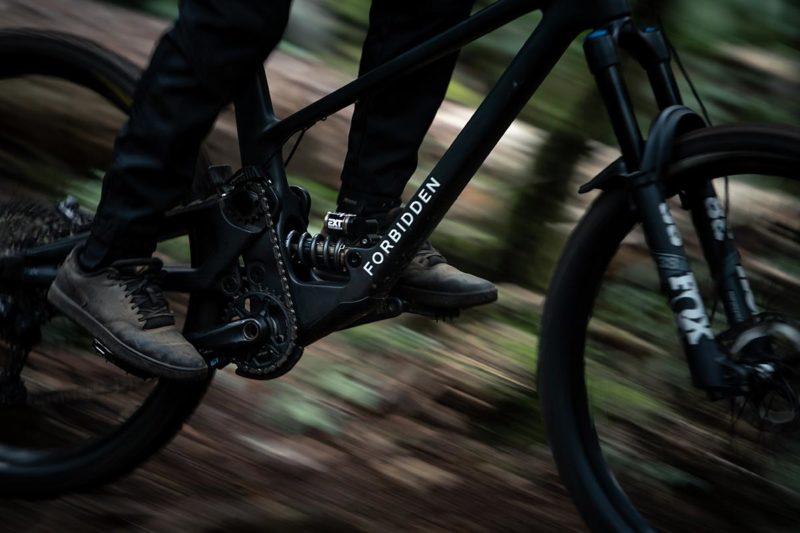 We first got eyes on Forbidden’s new long travel high-pivot enduro bike at Zermatt EWS last August. Still without a name, their (at the time) team rider Lewis Buchanan raced it, though we were only permitted to photograph it at some very strange angles. Now, we can give you a full view of the Forbidden Dreadnought with its 154mm of rear wheel travel. 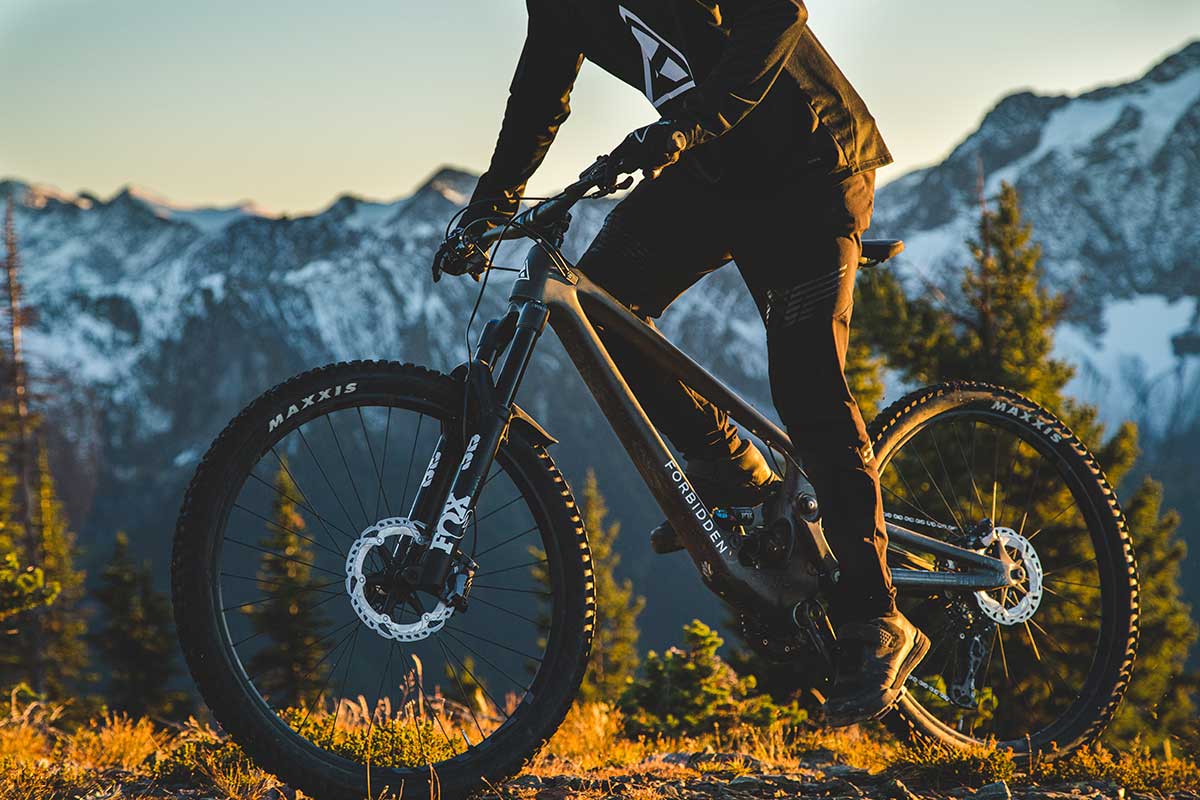 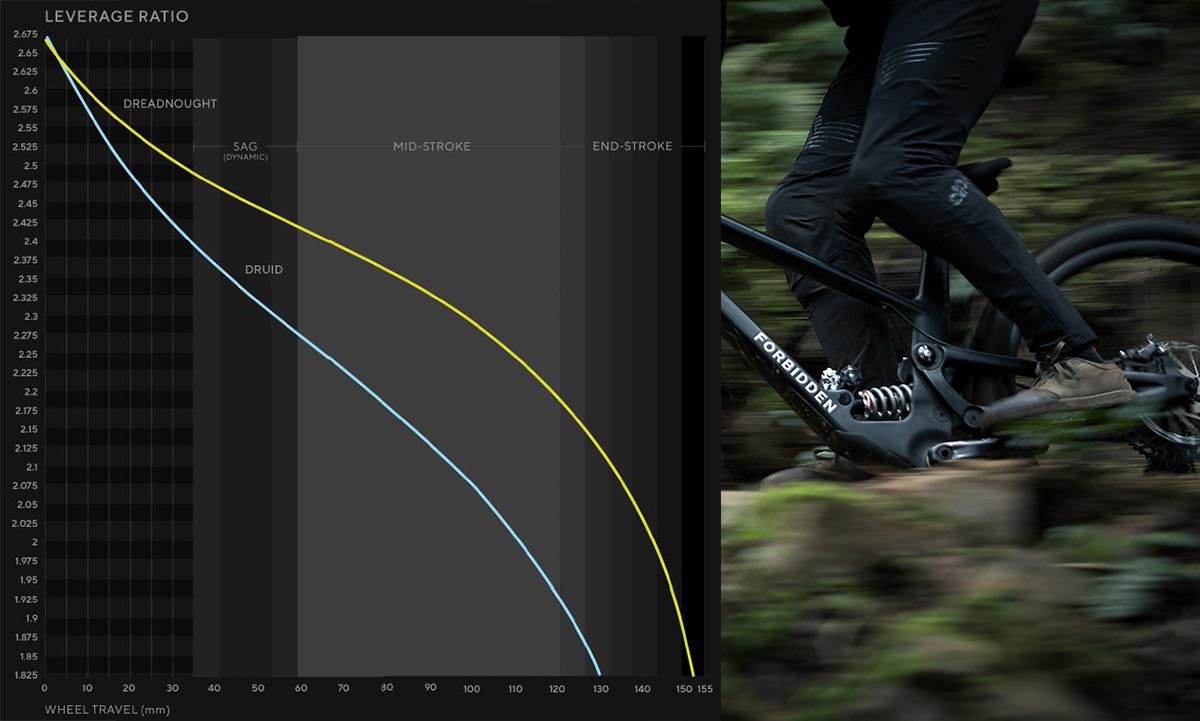 That rear wheel travel is delivered by their Rate Control Linkage. They say, “the mid-stroke rate of progression is tuned to provide adequate support, yet remain open enough to absorb repetitive hits with no harshness. The end stroke sees an increase to the rate of progression providing a truly bottomless feel”. 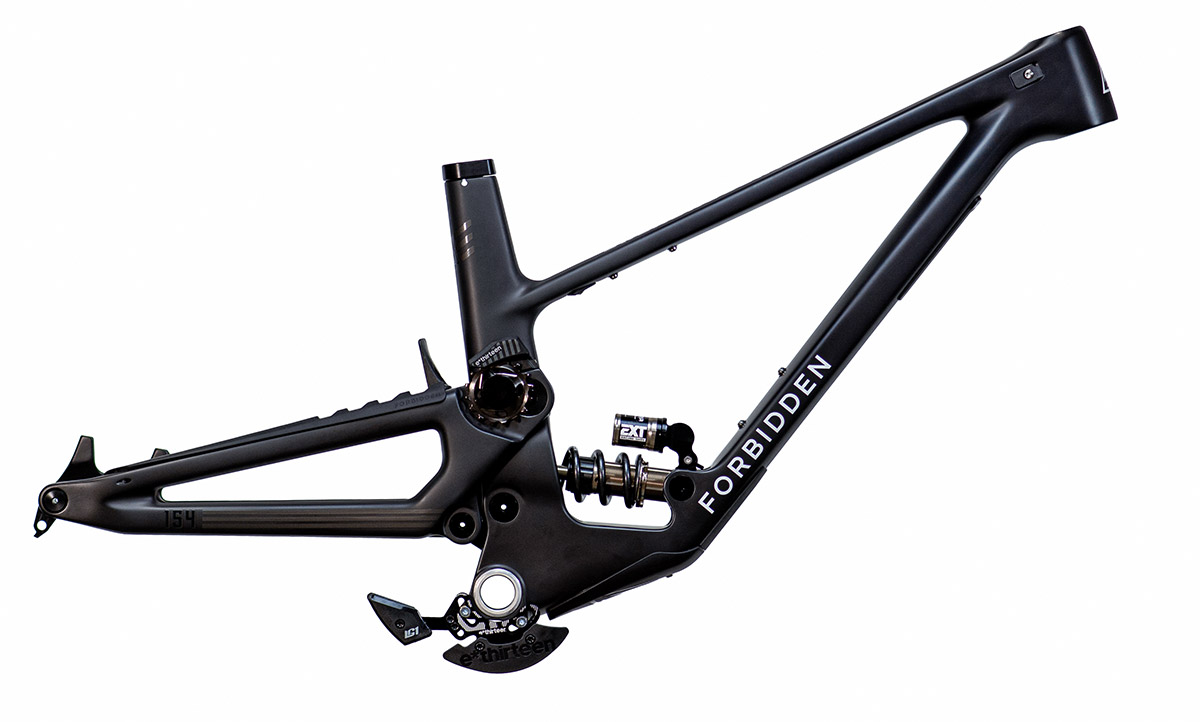 As seen on the Druid, the positioning of the idler pulley close to the location of the main pivot almost entirely eliminates pedal kickback. Routing the chain in this way prevents chain growth that normally occurs as a bike’s rear suspension compresses. The idler is however slightly offset from the main pivot, which allowed Forbidden to tune the bike’s anti-squat character. 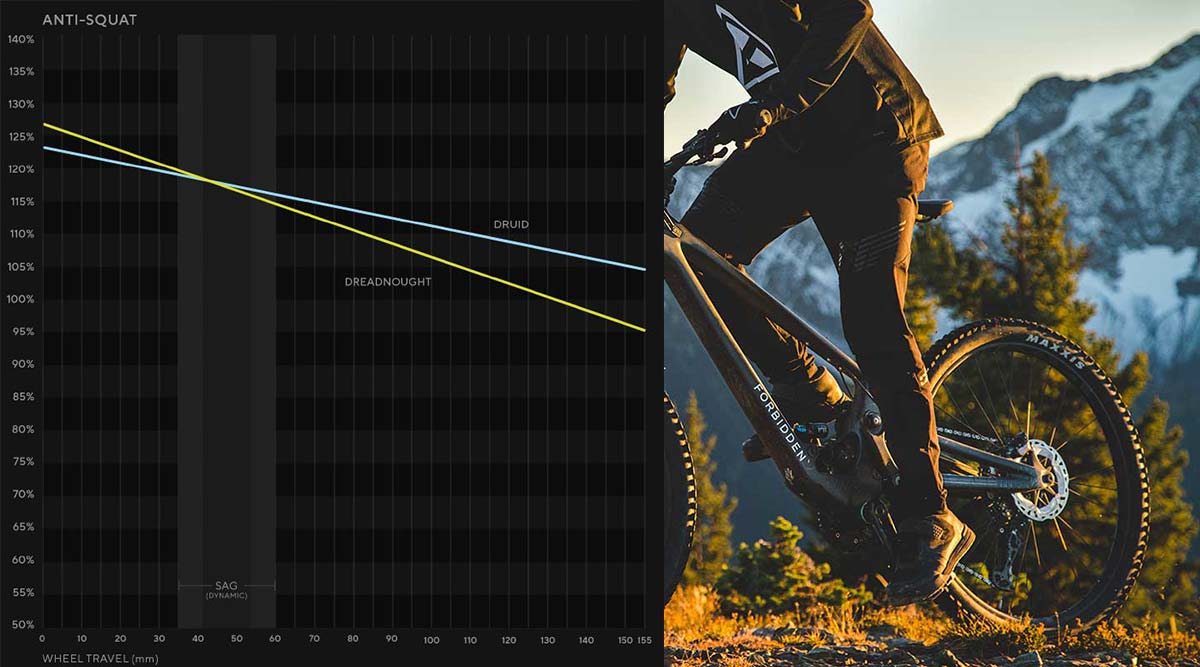 The Dreadnought can be run as a full 29er or with a 27.5″ rear wheel. The mullet set-up requires an alternate link called the Ziggy Link, which will cost you an additional $139.99 USD. We asked Forbidden how this would change the bike’s geometry. Oliver Forster says “It will deliver similar geometry changes as it does with the Druid, so half a degree slacker”. A complete mullet geometry chart is on its way.

What’s all the fuss about a rearward axle path? 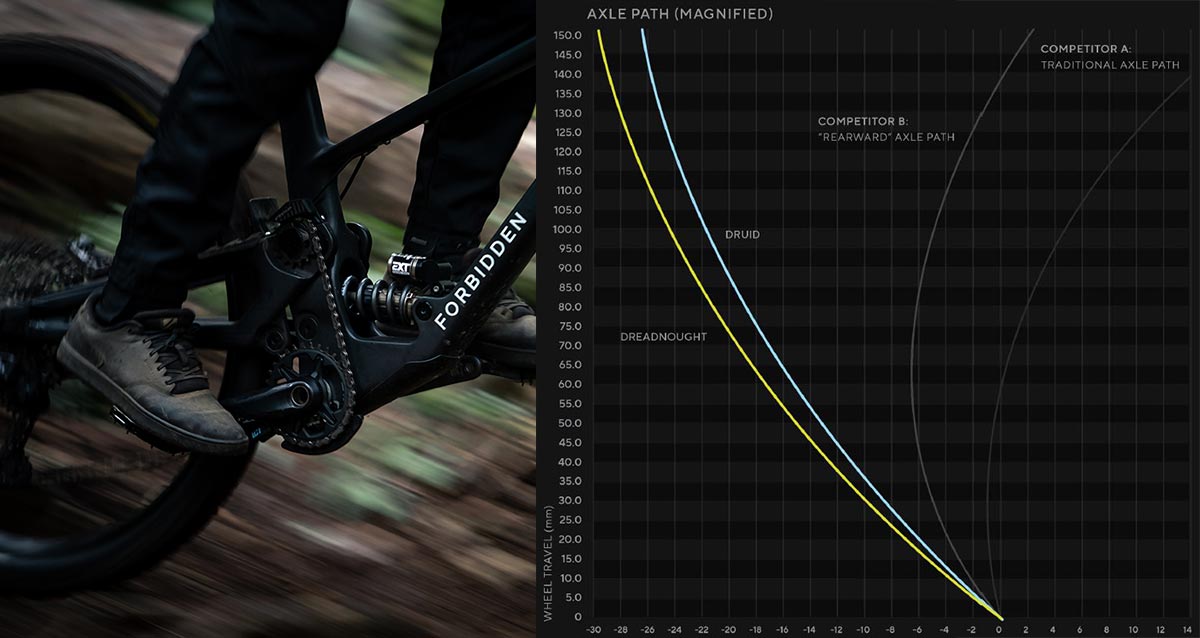 It is the Dreadnought’s high-pivot suspension platform that allows for a rearward axle path. Through its 154mm of vertical travel, the rear axle moves backwards horizontally by 30mm. At no point during its travel does the rear axle move forwards relative to the front triangle. Why should you care?

Well, on most traditional full suspension bikes, the rear wheel only moves rearward in the very early stages of suspension compression. From thereon, the axle path moves forward relative to the front triangle, shortening the bike’s wheelbase. 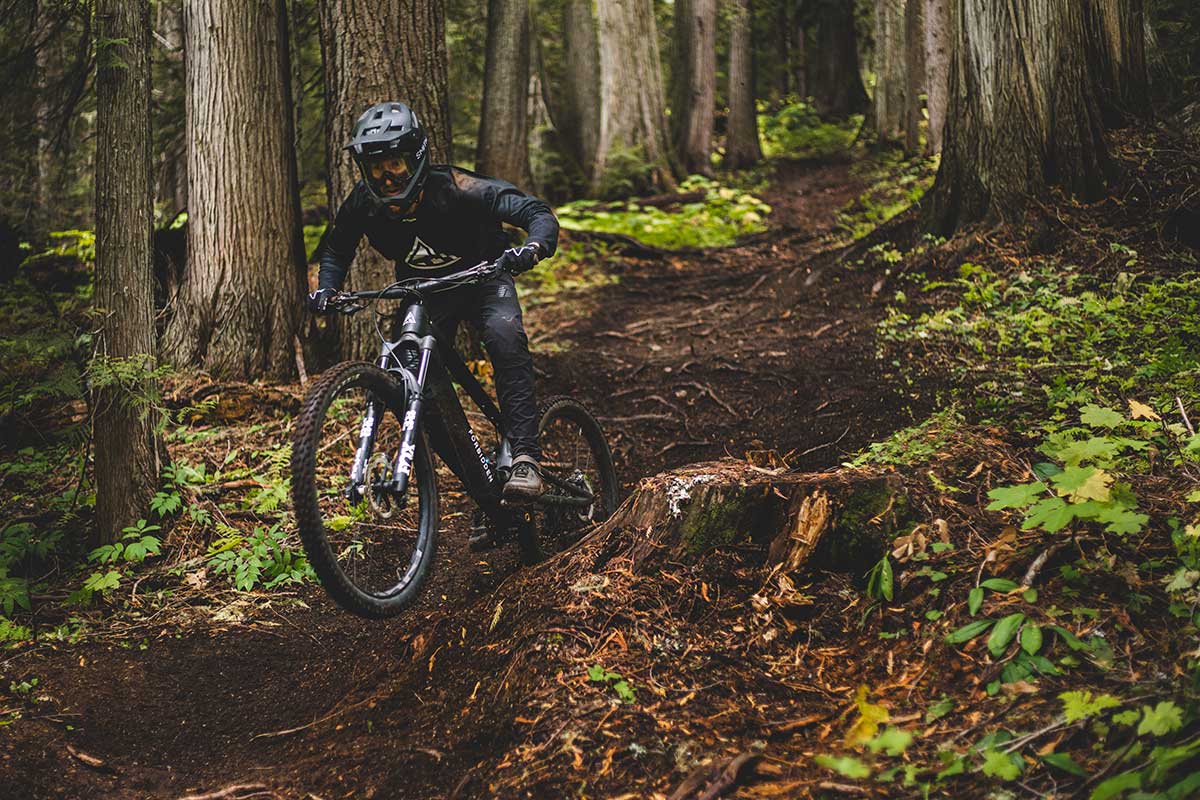 On a high-pivot bike, as the bike is pushed through its suspension, the wheelbase remains rather more constant. The rearward movement of the back wheel matches the rearward movement of the front wheel as the fork travel is compressed too. Forbidden, and other high-pivot bike manufacturers, say that this makes for a bike that is more stable at speed and a bike that manages square-edged hits more efficiently. 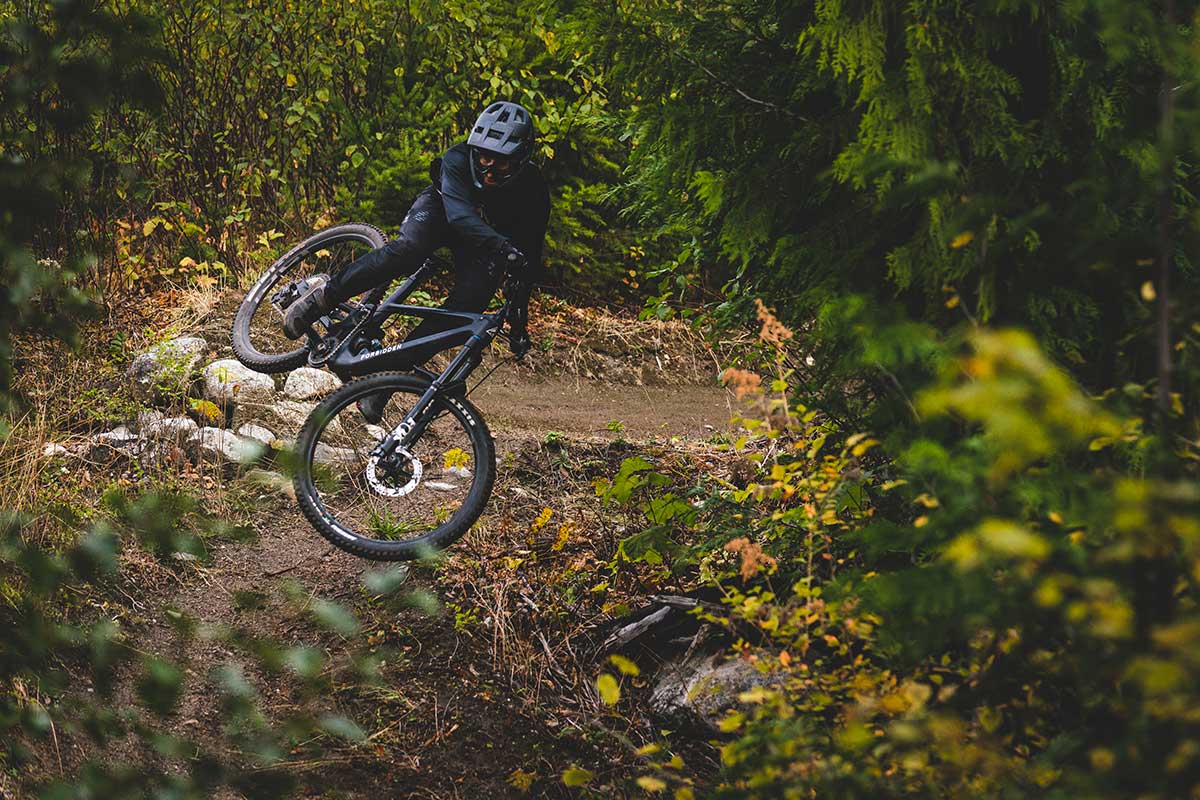 You can imagine it: As the rear wheel hits a square-edge, it moves backwards, out of the way of the obstacle, rather than being forced forwards and into the obstacle. The result should be a ride feel where the bike doesn’t feel as though it is getting “hung up” on rocks and roots in the trail. 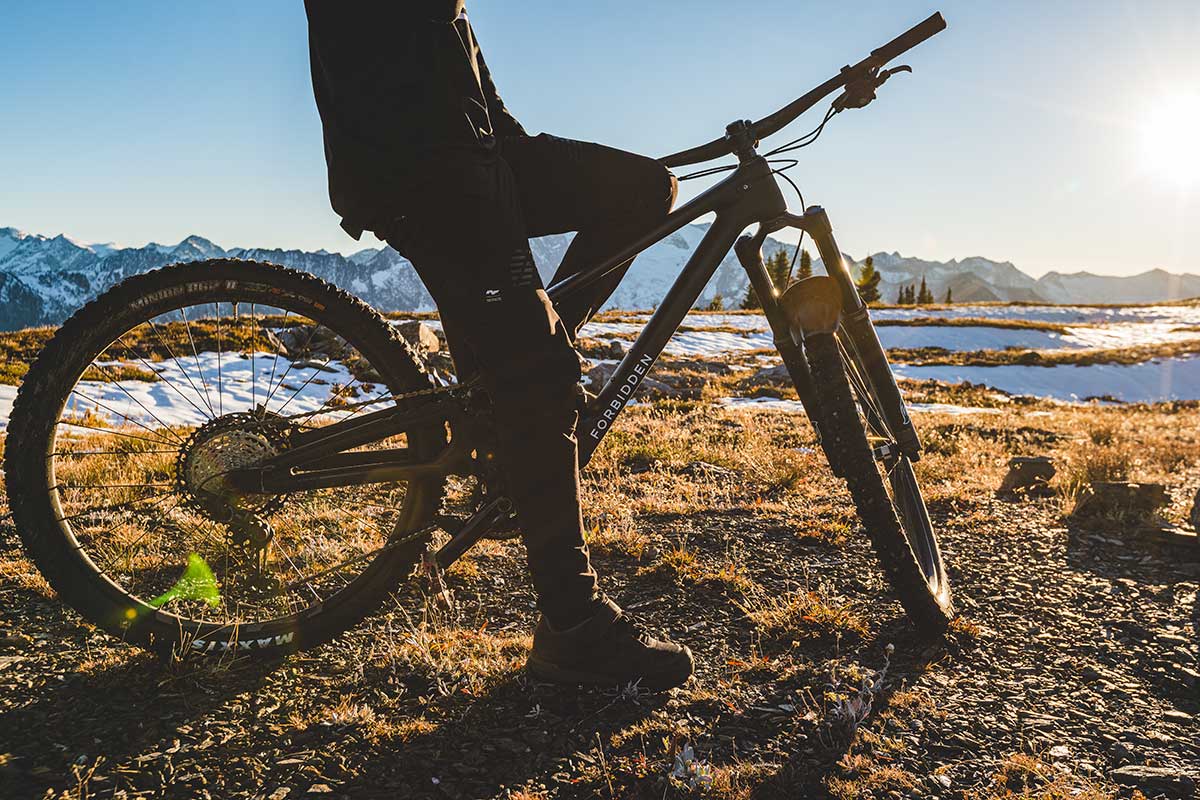 Proud of the frame size-tailored geometry seen on the Druid, Forbidden have continued that philosophy on the long travel Dreadnought. As well as increases in reach and seat tube lengths, the bike’s rear centre also increases by 14mm per size as you go up the S-XL size range. It starts very short on the small at 422mm, increasing to 464mm on the XL. 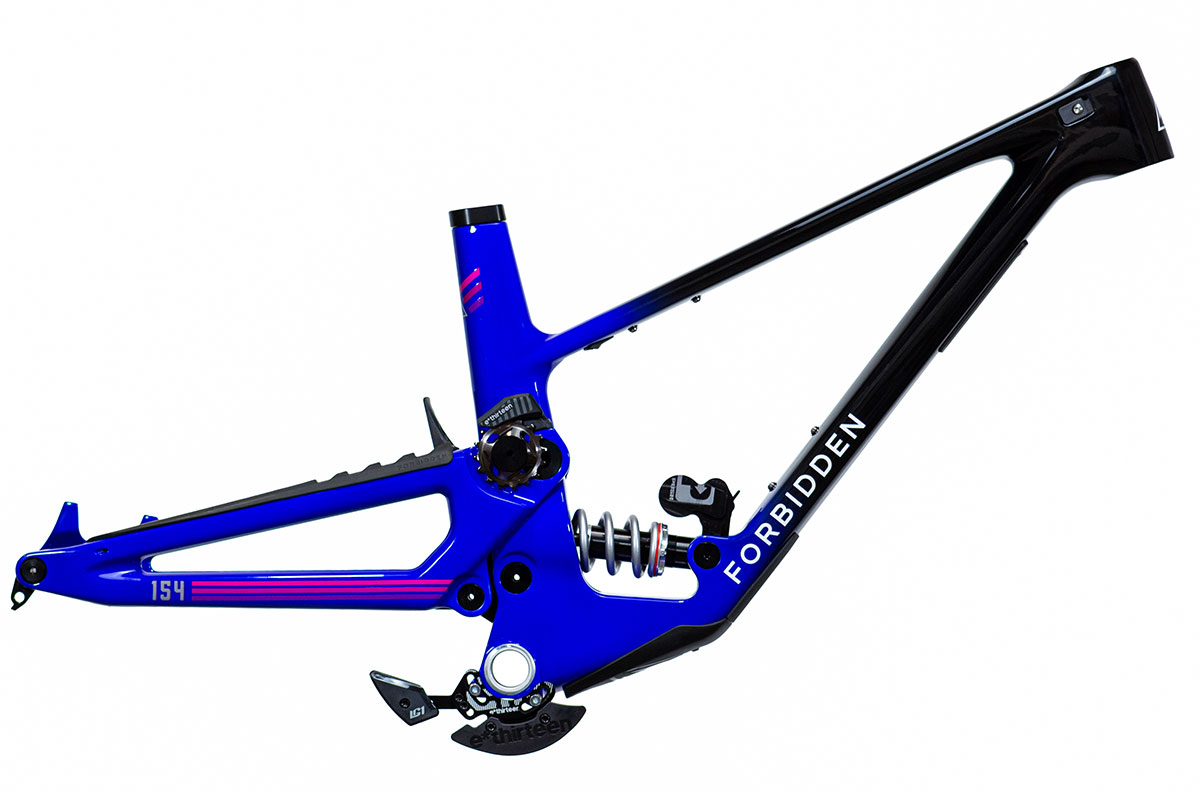 An increasing actual seat tube angle ensures a consistent effective seat tube angle of 76° throughout the frame size range. A 170mm fork with 44mm offset sits at a slack head angle of 63.5°. Reach measurements stretch from (a very generous) 440mm in small up to 506mm in XL. 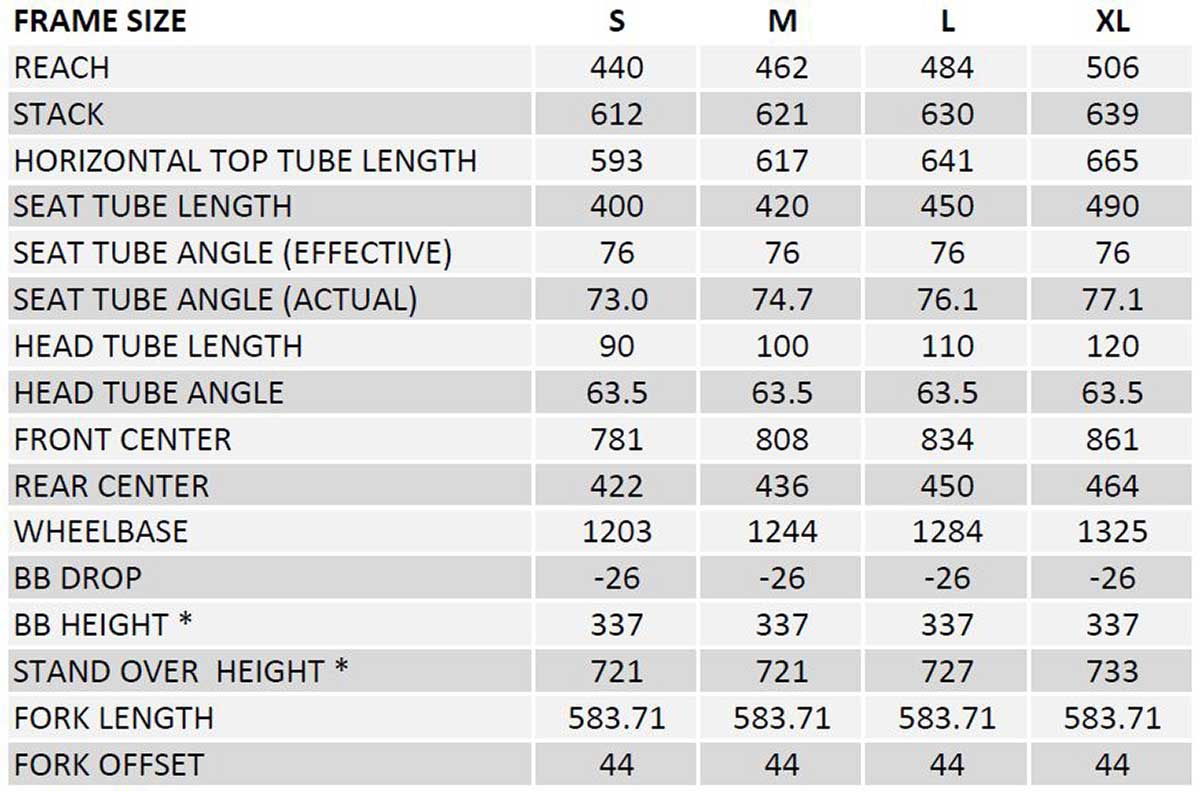 Figures in the above geometry chart are based on the Forbidden Dreadnought running 29″ wheels with a 2.4″ tire (OD 746mm) and a 170mm travel fork 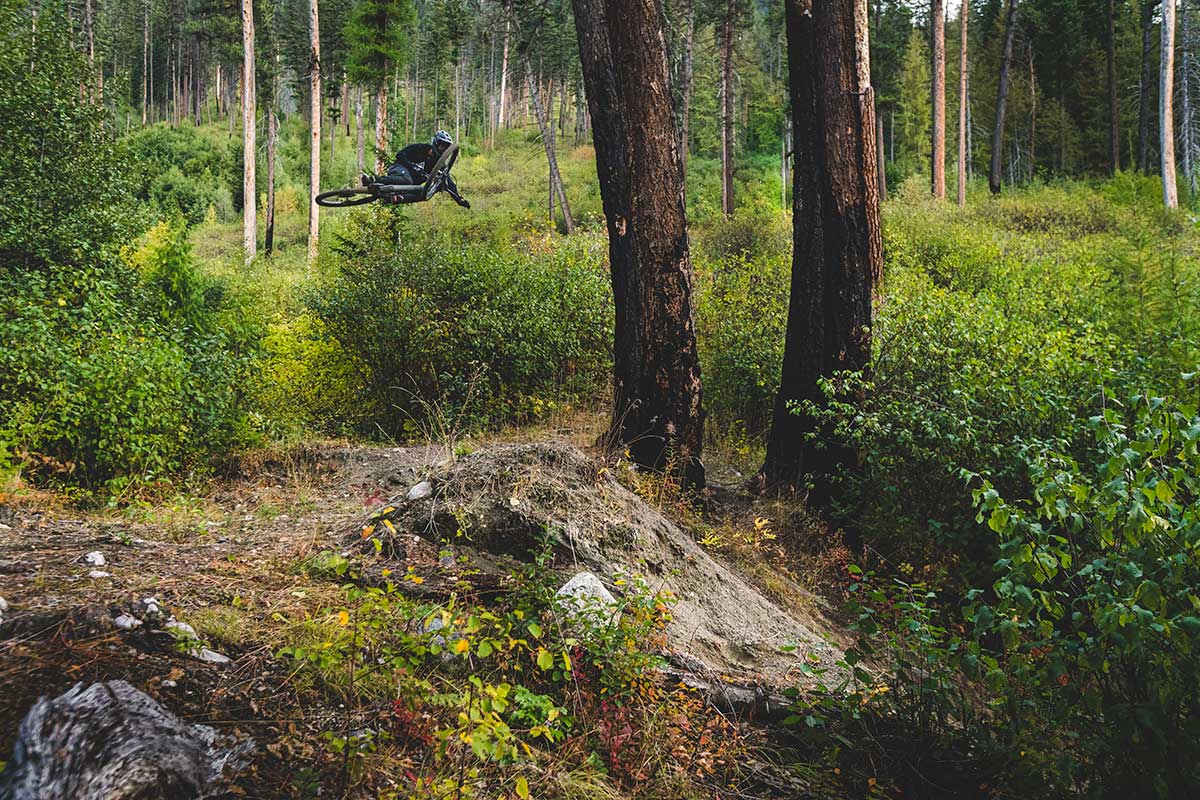 The Forbidden Dreadnought is a full carbon frame tested to DH standards, suggesting it can be run with a dual-crown fork. We quizzed Forbidden on this, asking whether they’d actually recommend anyone do this. Here is Oliver Forster’s response: 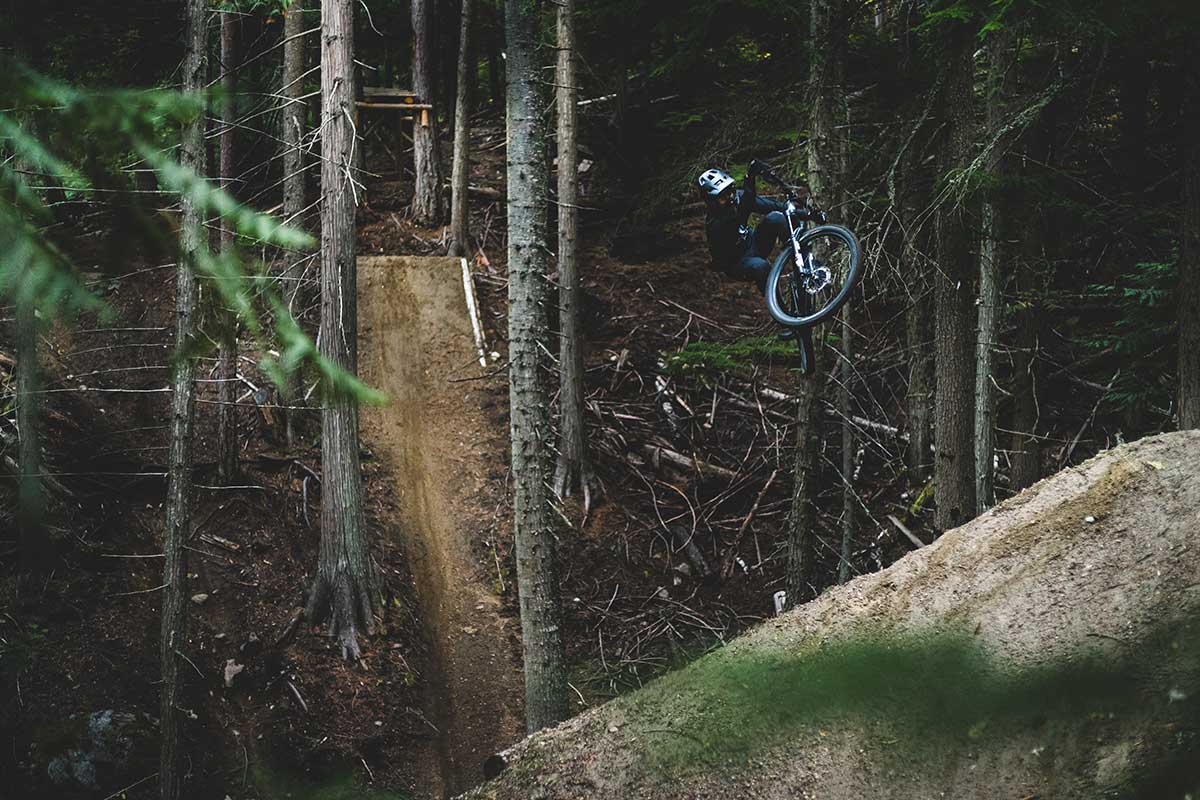 He goes on to say, “For reference, some of our ambassadors will be building mini-DH/park bikes with 190mm forks. A 190mm Boxxer is 592mm and a Fox 40 is 588mm – these numbers reflect axle to crown. A longer fork will, however, slacken the head angle so a rider would need to be aware of the changes, positive and negative, that would be incurred as a result of a longer fork”.

The Forbidden Dreadnought will initially be available as a frame and shock from early February in two colorways: Stealth and Deep Space Nine. Choose between an EXT shock ($4,049 USD) and Push Industries shock ($ 4,249 USD). 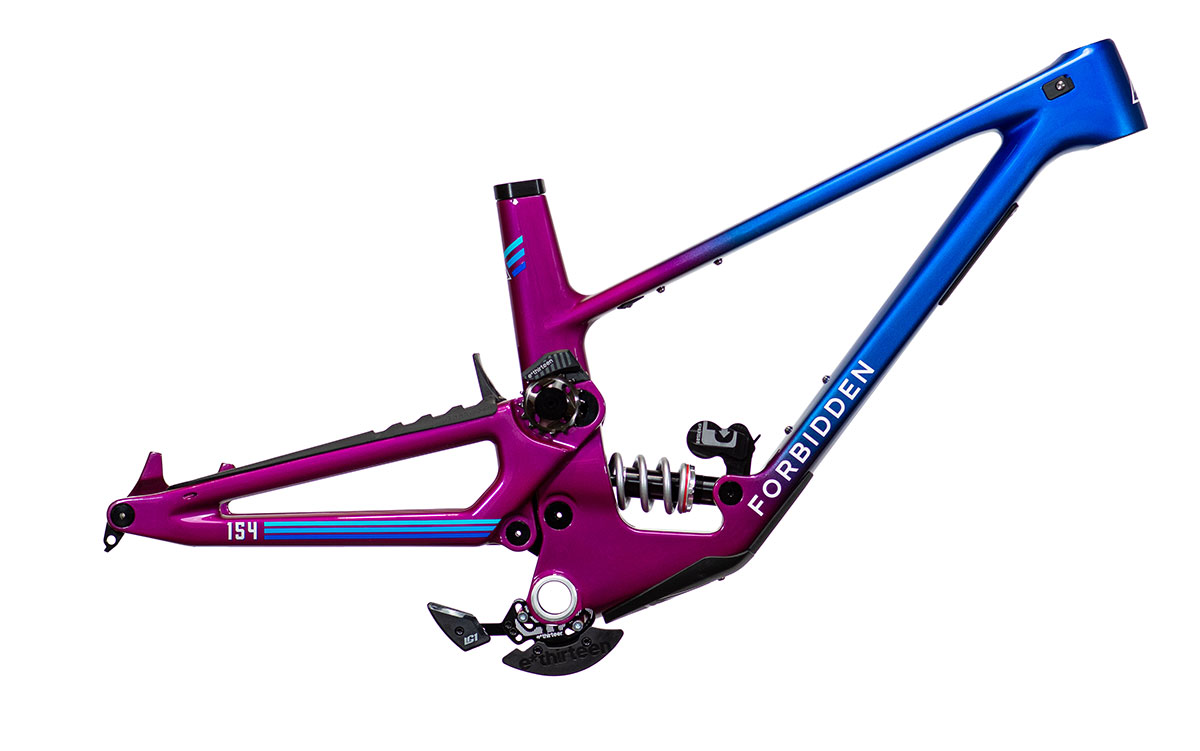 A third frame only colorway (Nerds) is coming in late spring along with a Dreadnought XT complete build with Fox X2 shock priced at $6,499 USD). A Dreadnought SLX build is due in the summer; it will cost you $5,349 USD). 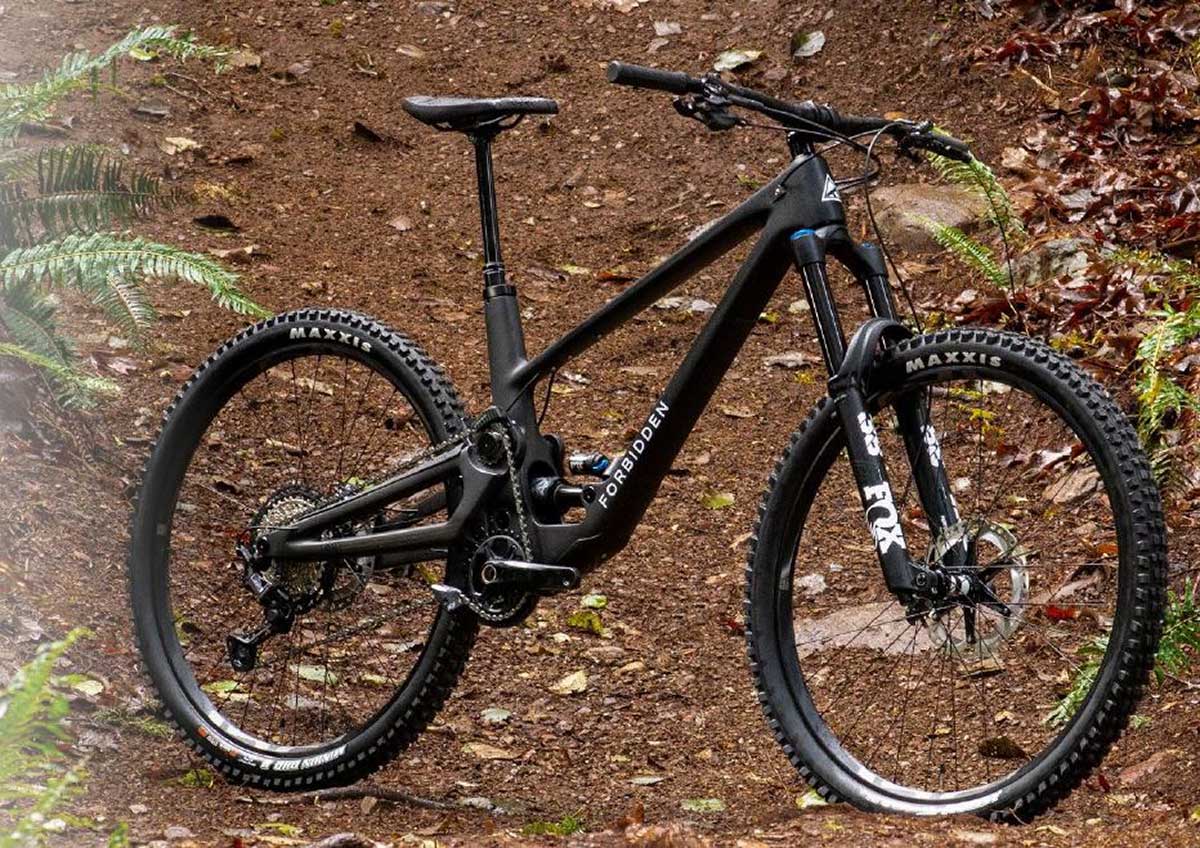 Braking forces (rearward) would be the achilles heel of this design.

Why? Because braking would cause the wheelbase to grow?

I would tell you Tim but it’s verboten.