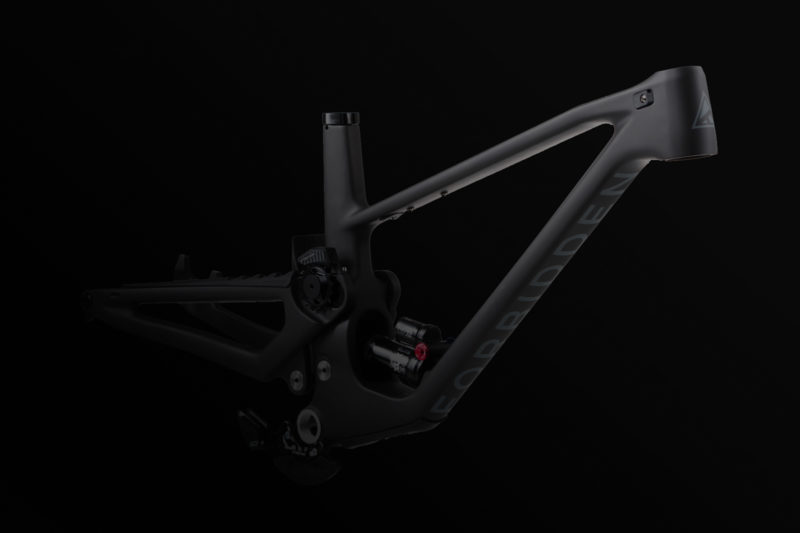 Last summer during Crankworx Whistler, Bikerumor got a very limited sneak peek at a new bike from a new company- Cumberland, B.C.’s Forbidden Bikes. Since then Forbidden has named their high single pivot trail bike the Druid, and we now have tech specs and suspension details to share. After two years in development, Druid frame kits are available as of today.

The Druid is designed to be a do-it-all trail machine. These carbon-only bikes ride on 29” wheels and offer 130mm of rear travel. Intended to run either a 140mm or 150mm fork the Druid is a versatile ride that should feel at home on just about any trail network, but it’s built tough enough to handle DH-style terrain too. 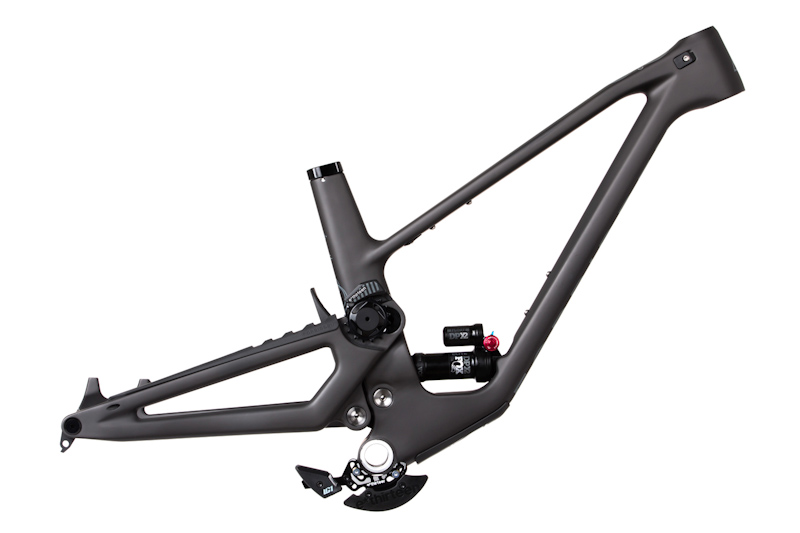 Without a doubt the most notable feature of the Druid is its high single pivot Trifecta suspension linkage. Forbidden feels this is the best linkage to work with, as it offers enough engineering freedom to create a frame that provides excellent big-hit absorption, consistent traction and a poppy, supportive feel all at once. 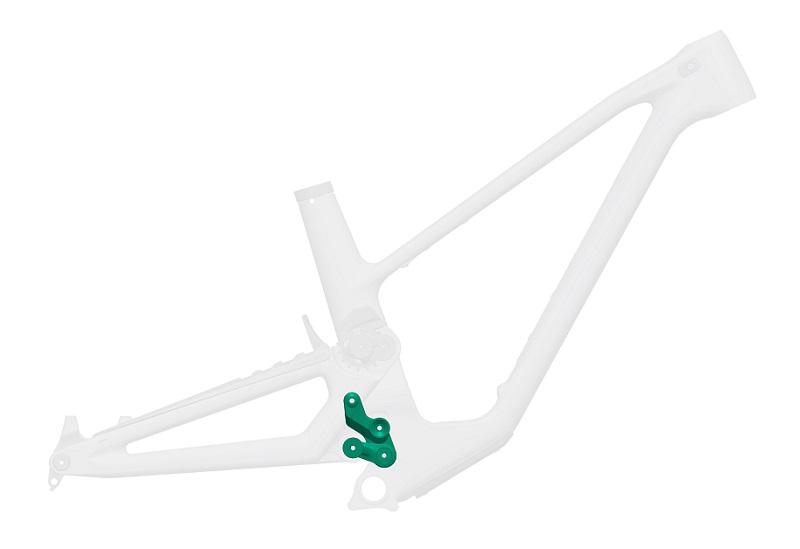 Where many brands are moving towards very progressive shock rates to handle the bigger, harsher impacts incurred by modern trail/enduro bikes, Forbidden says going too progressive can reduce the suspension system’s ability to suck up bumps. Using short, high-velocity links that enable the initial, mid and end stroke of the shock to be tuned individually, their Rate Control Linkage seeks to strike an ideal balance in its mid-stroke. 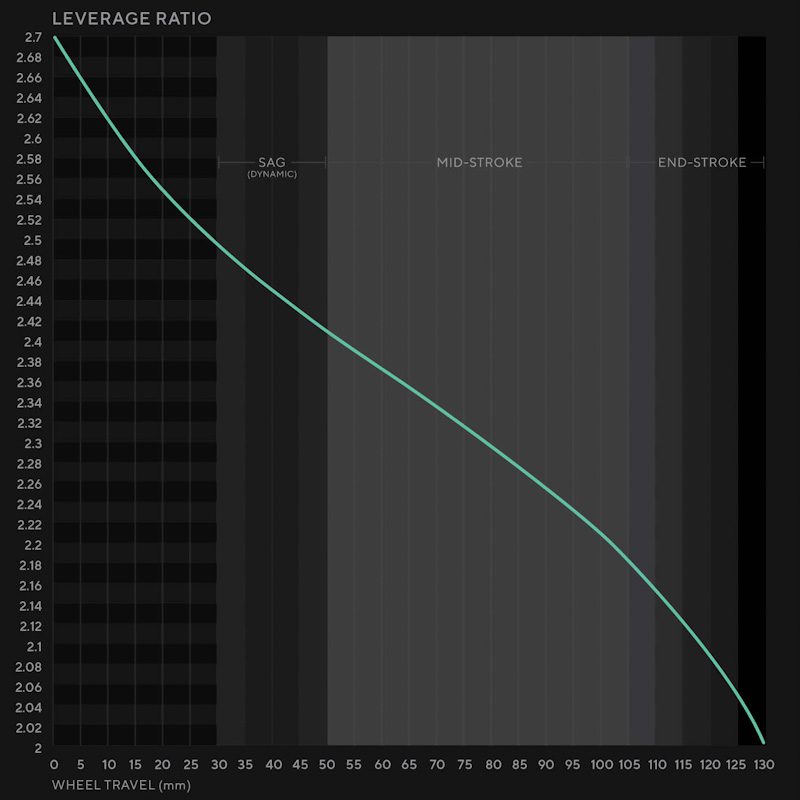 Like many bikes the leverage curve is supple off the top and ramps right up at full travel. However, the Druid’s mid-stroke remains fairly linear in order to offer good pedaling support while keeping the rear end highly active to absorb repeated hits.  Forbidden says the Druid eats up impacts like a longer travel machine, while offering excellent traction and maintaining a poppy, playful ride. 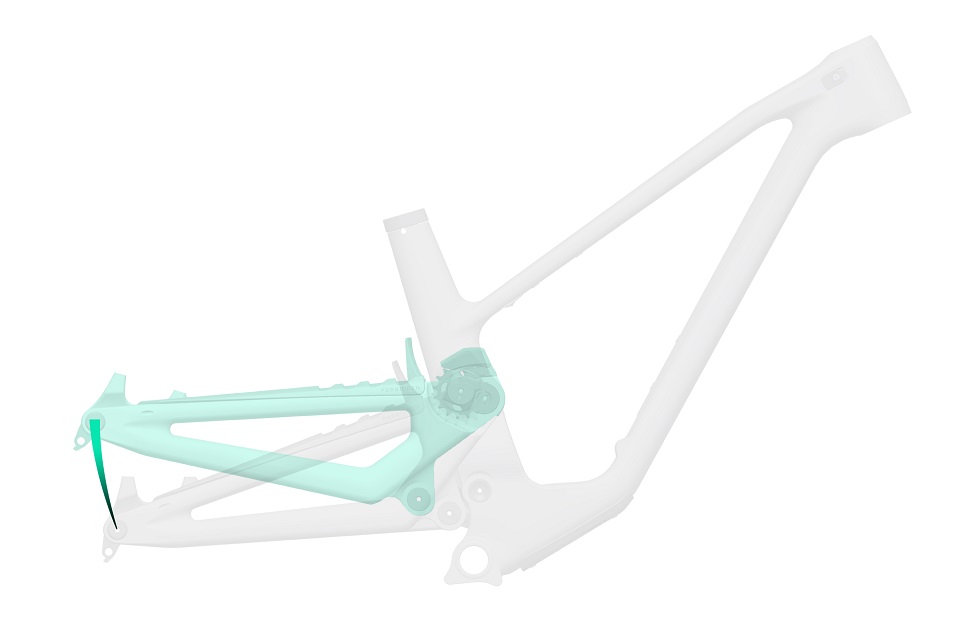 The location of the Druid’s main pivot causes the rear end to follow a completely rearward axle path as it moves through its travel. Allowing the wheel to move backward helps the bike smoothly absorb impacts of any size and effectively carry speed over rough technical trails, but it also has another positive effect – Since the rear end effectively grows longer under compression, the bike provides more stability when you’re pushing it hard and diving deep into the travel. Conversely, when you’re climbing or cruising along a less technical trail the bike rides high in its travel and maintains a more agile stance. 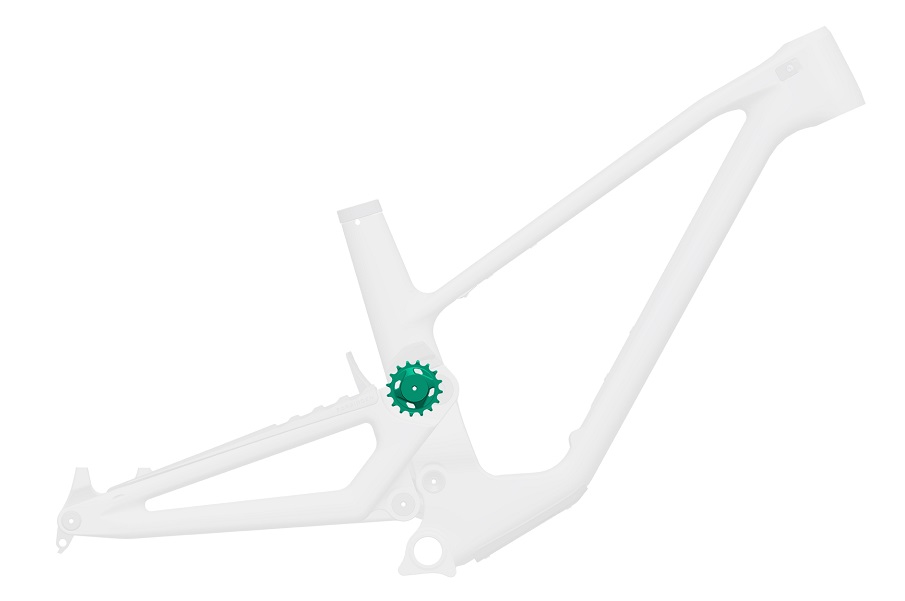 The size and location of the Druid’s idler pulley allows Forbidden to fine-tune the suspension’s anti-squat characteristics to what they consider ideal. The Druid aims to deliver a very stable pedaling platform, while the idler pulley nearly eliminates pedal kickback and allows the rear end to remain fully active during hard cranking. Offering solid pedaling support and a rear end that remains highly active, the Druid aims to devour technical climbs.

Forbidden has also tuned the Druid’s anti-rise to balance out what happens up front when you hit the brakes hard. With a fairly high degree of anti-rise, the rear end of the Druid counteracts against fork dive and keeps the bike feeling more consistently stable through hard braking.

Given that the Druid is an all-around bike, Forbidden strayed from doing anything too wacky with their geometry. Their geo strikes a balance between stability, agility, and all-terrain capability. 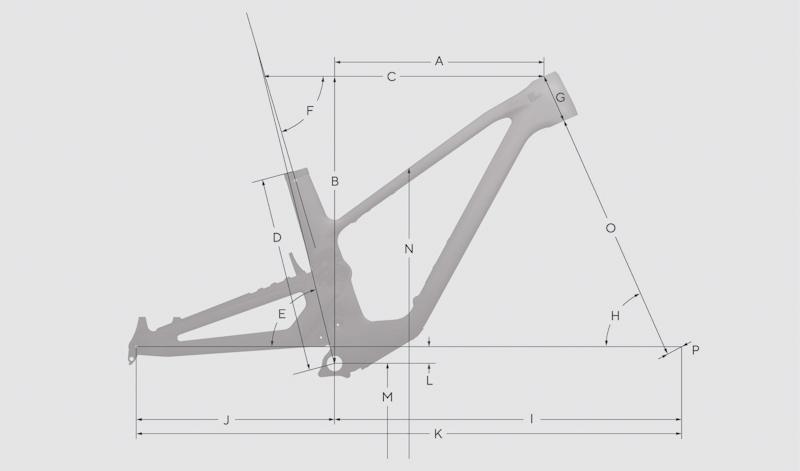 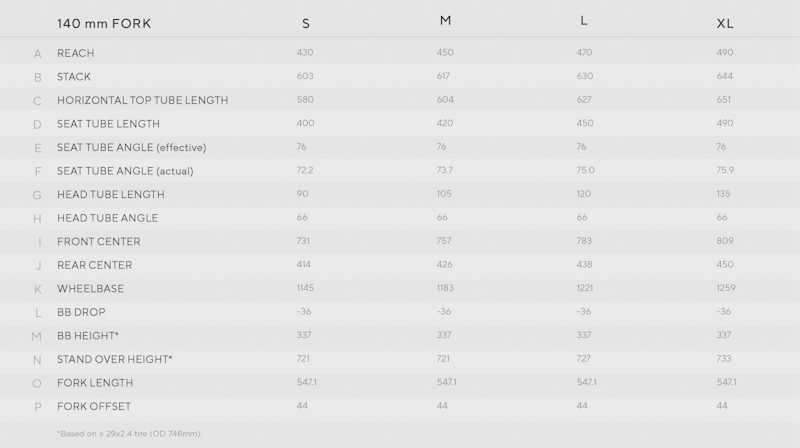 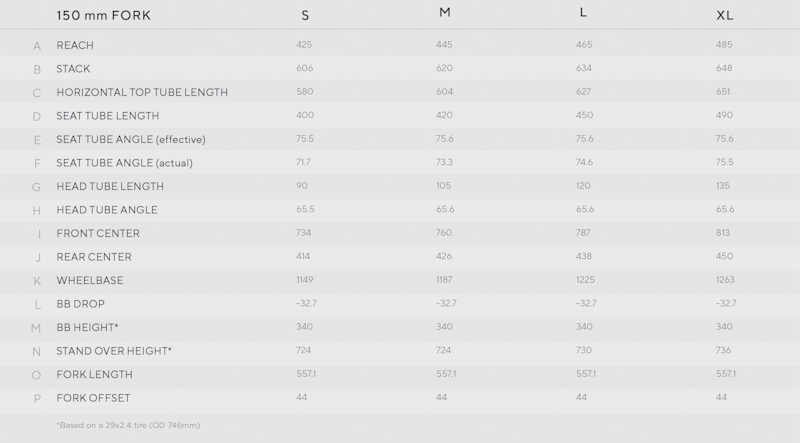 Forbidden feels it’s important for every rider to get the same ride characteristics out of their frame, regardless of what size they require. A major factor in a bike’s handling is its weight balance, which profoundly affects stability and traction from the front and rear wheels.  To keep the Druid’s weight balance consistent across sizes, each frame size has its own optimized rear-center length. 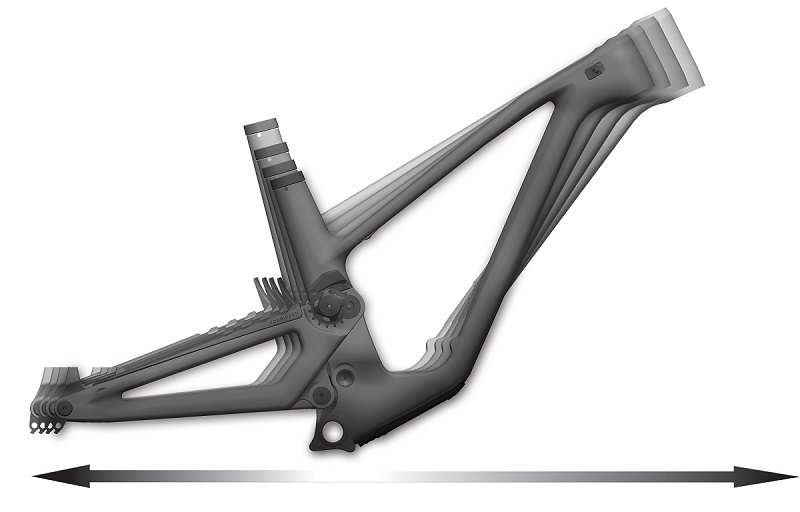 The rear ends aren’t the only thing that changes between different frame sizes; both the seat tube angles and head tube lengths vary as well. As the frames get larger, their actual seat tube angles get steeper. This ensures that taller riders don’t wind up sitting further back than those riding smaller frames. The head tube lengths on the Druids also change quite a bit from size to size, again in the pursuit of offering a better fit for any buyer. 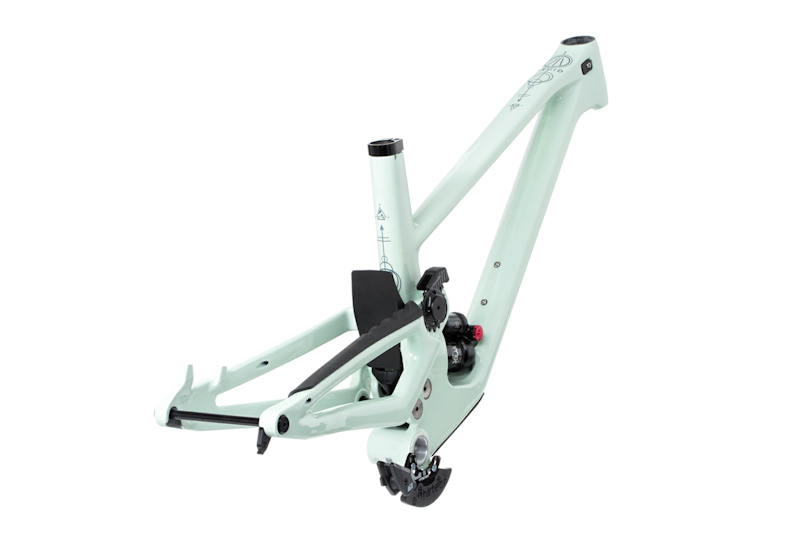 Druid frame kits are now available in Canada, USA and the UK (Despite being a small brand, Forbidden has set up an office and warehouse in the UK to handle European operations). Kits include the frame, a custom-tuned Fox DPX2 Performance Elite rear shock, a custom e-Thirteen chain guide, and a seat clamp. Druid frames are now available in Small, Medium and Large sizes (XL’s are coming in late 2019), and there are two color options- Matte Carbon or Gloss Moss.

Kind of interesting that the frame comes with a lower chainguide. I don’t see many riders running a lower guide with narrow wide CRs. I wonder if this bike requires a lower guide because of the excess chain growth in the lower run of chain.

Chainguides still have their place on any bike. Consider this, with one front chainring, if you bend it or the teeth it could be a difficult ride out…..an ounce of prevention is worth a pound of cure.

In fact, high pivots bikes require a lower chain guide pulley placed even higher, so as to minimize chain growth…