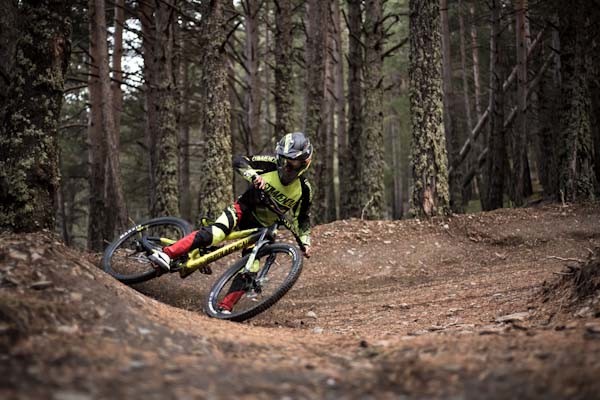 It’s a cliché that rings true, but we’ve all said it before: kids are the future of the sport. Commencal is clearly on board with this thinking, and they’ve created an entire line of thrashable kids bikes for every size and age, ranging from a 12” run bike to their newly released Supreme DH Junior, which sports a compact DH frame on full-sized wheels.

With their expertise as a dedicated bike manufacturer, Commencal has carefully fitted the components on each model to suit the rider’s size: the handlebars, stems, and cranks grow as the bikes do, which is a key factor that department store brands often don’t consider. Click past the break to see the full line of kids bikes, and a video of 14 year-old Aaron Querol throwing down like the big boys on the Supreme DH Junior…

Billed as the ‘missing link’ between the Supreme 24” and the adult-sized models, Commencal’s Supreme DH Junior features a completely new 6066 hydroformed aluminum frame designed to fit riders between 4’6″-5’3″ in height. The Junior model boasts 150mm of rear travel, a 160mm fork, and rides on 650B wheels with 142x12mm rear spacing. While Commencal says 26” seemed most appropriate for this in-between bike, 27.5” wheels were eventually chosen due to the wider selection of available components. 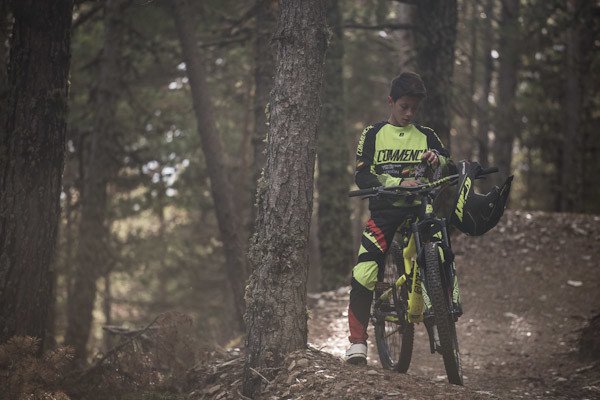 The frame is designed to provide a low standover height and the complete bike remains reasonably light at 30.86lbs. Specially sized components include Ride Alpha’s 6061 alloy handlebar (720mm) and stem (50mm) plus their 160mm cranks, which are outfitted with a 32t narrow-wide front ring. The double wall rims, sealed headset and hub bearings, lock-on grips and E-thirteen chain guide should keep things together throughout the thrashing of an overly confident young ripper. 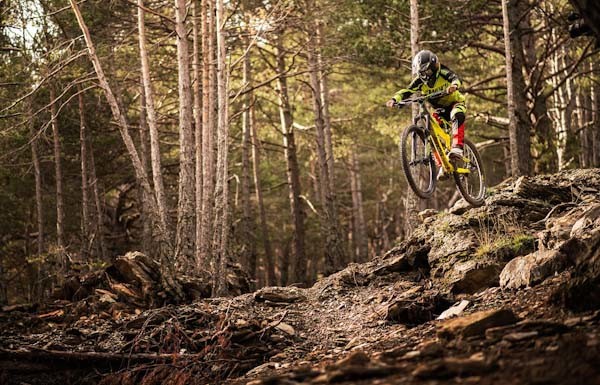 Suspension is handled by RockShox, with a Monarch RT in the rear and a Yari XC fork with tapered head tube and 15mm front axle. Sram’s DB1 hydraulic disc brakes grab 180mm rotors front and rear, and an X-5 shifter/derailleur combo sorts out the nine speed drivetrain. Not skimping on the rubber, the Supreme DH Junior rolls on Maxxis’ tested and true High Roller 27.5×2.3” tires. A pair of Wellgo platform pedals also come as stock equipment.

The Supreme DH Junior will be available in Yellow/Black as of Nov. 20th, but can be pre-ordered online now at an introductory price of $2199 USD (actual MSRP will be $2299.) 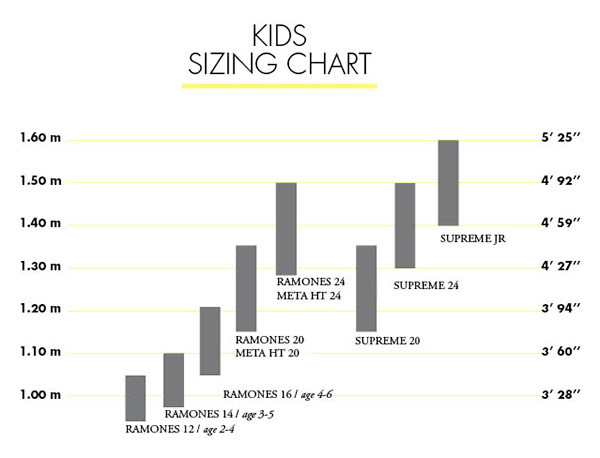 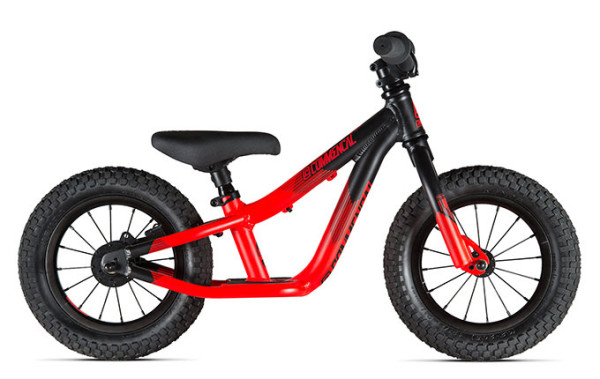 The Ramones 12” run bike features a newly enlarged platform to place your feet while cruising. Component-wise, they’re pretty simple but the chromoly fork and alloy bar/stem are worth mentioning. The frame also features rear disc brake tabs to slow down daring tots who learn fast! The 12” Ramones run bike is on sale for $179 (reg. $189), and comes in Red/Black. 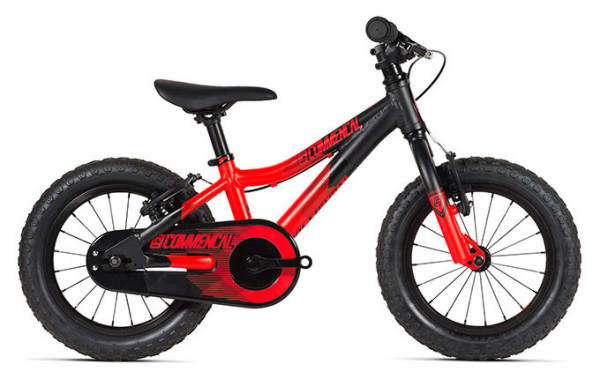 The 14” Ramones adds a covered single-speed drivetrain, front and rear V-brakes with child sized levers, and a quick-release front wheel. Unlike the run bike, there are no mounts for upgrading to disc brakes. The 14” is currently selling for $239 (reg. $249) which includes a set of training wheels. 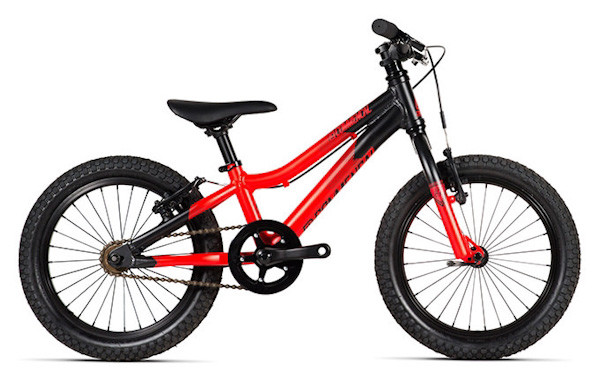 The 16” model is still a single-speed setup, but forgoes the chain guard. The handlebars get a little wider to suit riders between 39″-47″ tall, but otherwise the components are largely shared with the 14” version. Both sizes come in Red/Black, and the 16” currently costs $249 (reg. $259). 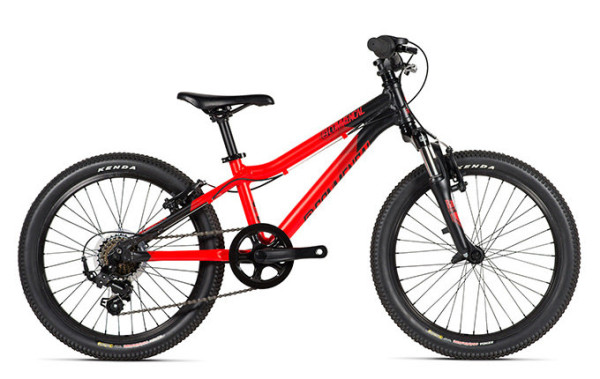 The 20” Ramones steps trail-ready kids up into the world of front suspension and multiple gears. A Suntour XCT 40mm travel fork sucks up the bumps, and a seven speed cassette mated to a Shimano Revo grip-shifter introduces young ones to the concept of selecting gears. The frame and fork are both equipped with mounts for upgrading to disc brakes. The 20” model can currently be had for $349 (reg. $379). 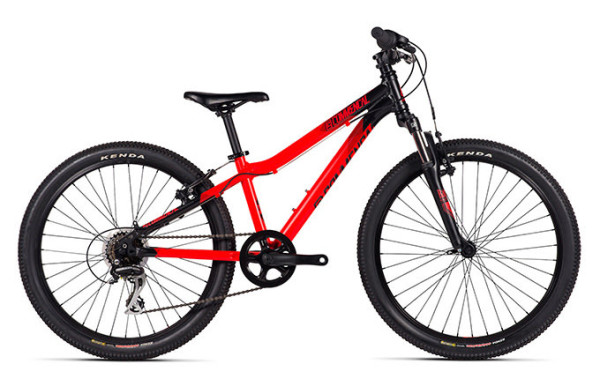 *All photos and video courtesy of Commencal Bikes

Finally, the Ramones 24” retains the seven speed gear range found on the 20” bike, but the larger Suntour XCT fork offers 50mm of travel. Again the cockpit components and crank arms grow a tad larger to match the rider and the bike has disc brake mounts in the rear… but for whatever reason the fork does not. The 20” and 24” models both come in Red/Black, and the 24” is on sale for $369 (reg. $410).