First released on the Friday before the show, we wanted to stop by to check out the new 45NRTH Dillinger 5 studded fatbike tire for obvious reasons. While the tire is labeled the 5, David Gabrys says it will really measure more like a 4.5 or 4.7 but since the tread is more beefy and square, the tread will actually measure wider than the casing. Part of the reason for the sizing is that to produce the Dillinger 5, 45NRTH went to a segmented jig instead of a clamshell jig. Segmented jigs vent the rubber through the mold and result in a more consistent tread weight compared to a clamshell jig. According to David, the Dillinger 5 is a big as the jig would actually allow them to make a tire. The result is an aggressively treaded tire that is also studdable for traction in the worst situations.

Check out the actual weight after the break. 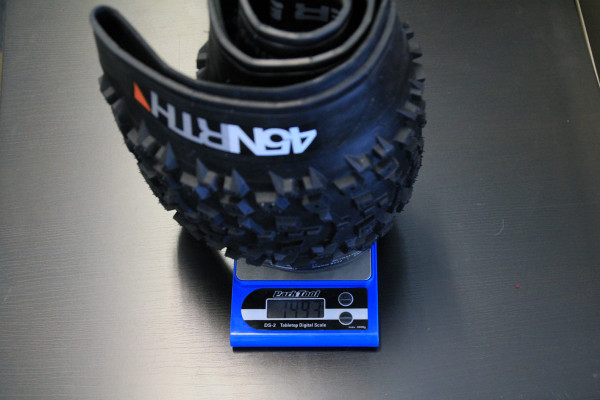 I have a dumb ?….Can studs be inserted and removed as the season calls for them? PIA I’m sure, but is this feasible?

Inserting studs is pain in the ass. Removing them is double the pain. Losing $1 per fallen out stud after it has been reinserted is also annoying.

Run 4″ rubber in the summer.

Much better. A Man’s haircut!

@haromania, yes it is possible – with the 45NRTH tool it takes about and hour to add/remove studs from a tire. But as mindless says, you would be better off using different rubber for the summer just from a cost perspective. Save the pricey rubber for the snow where it hardly wears. At least that’s what I would do/will do with my Escalators.