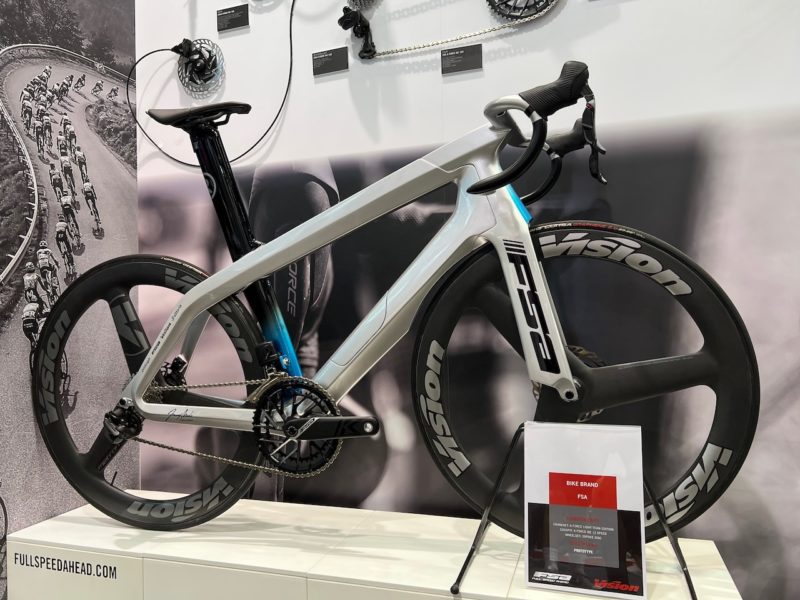 The new FSA K-Force WE groupset now clicks to 12 speed, and forgoes the rim brake options altogether, something unexpected for the Taiwanese component manufacturer but crucial to rival the big three of the shifting world. 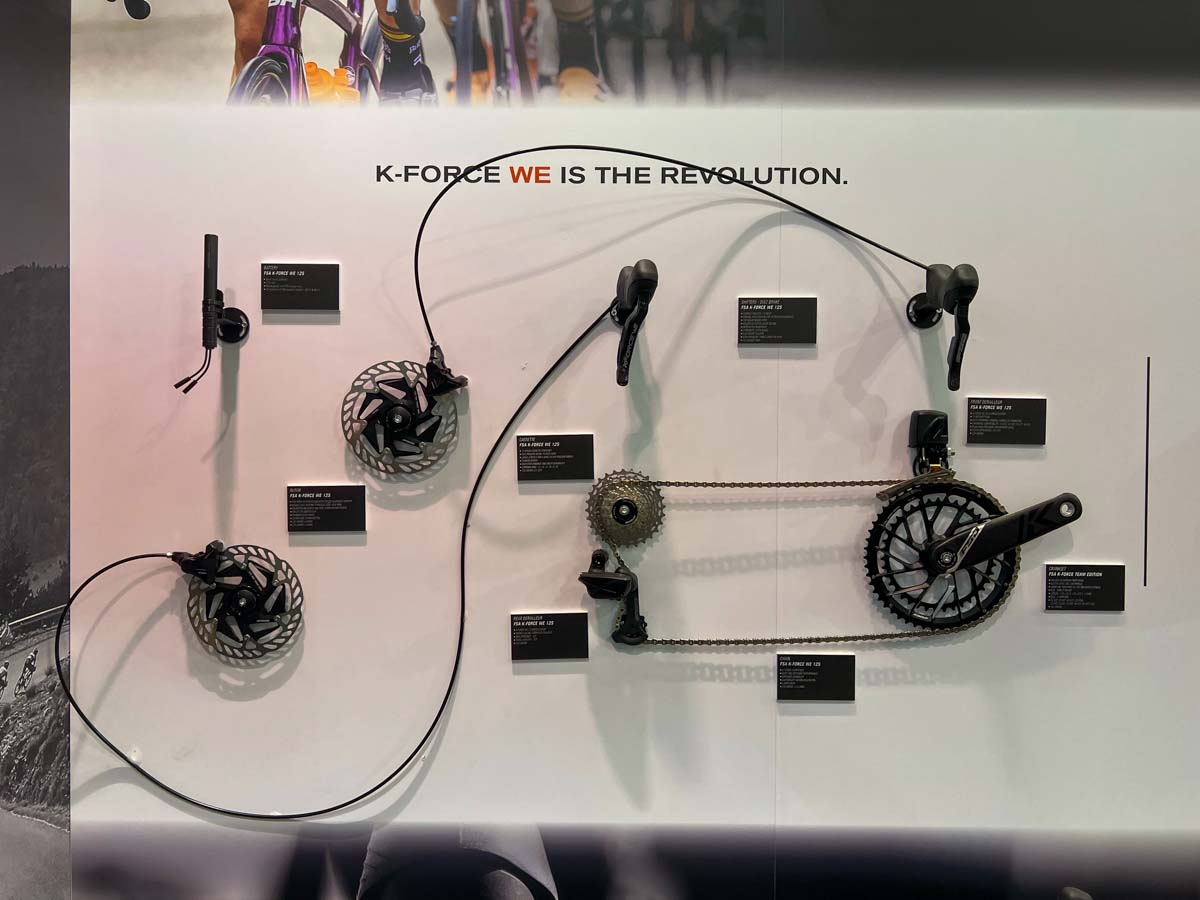 When FSA launched the K-Force WE 11-spd groupset, the cycling world didn’t know what to think; a company rarely challenged the big three and lived to tell the tale. On the other hand, if anyone has the resources to do it, FSA was a good bet. After thoroughly reviewing and training on the first iteration of the FSA WE 11-spd groupset, I can firmly say this group has promise. Now, that promise comes in 12-speed form. 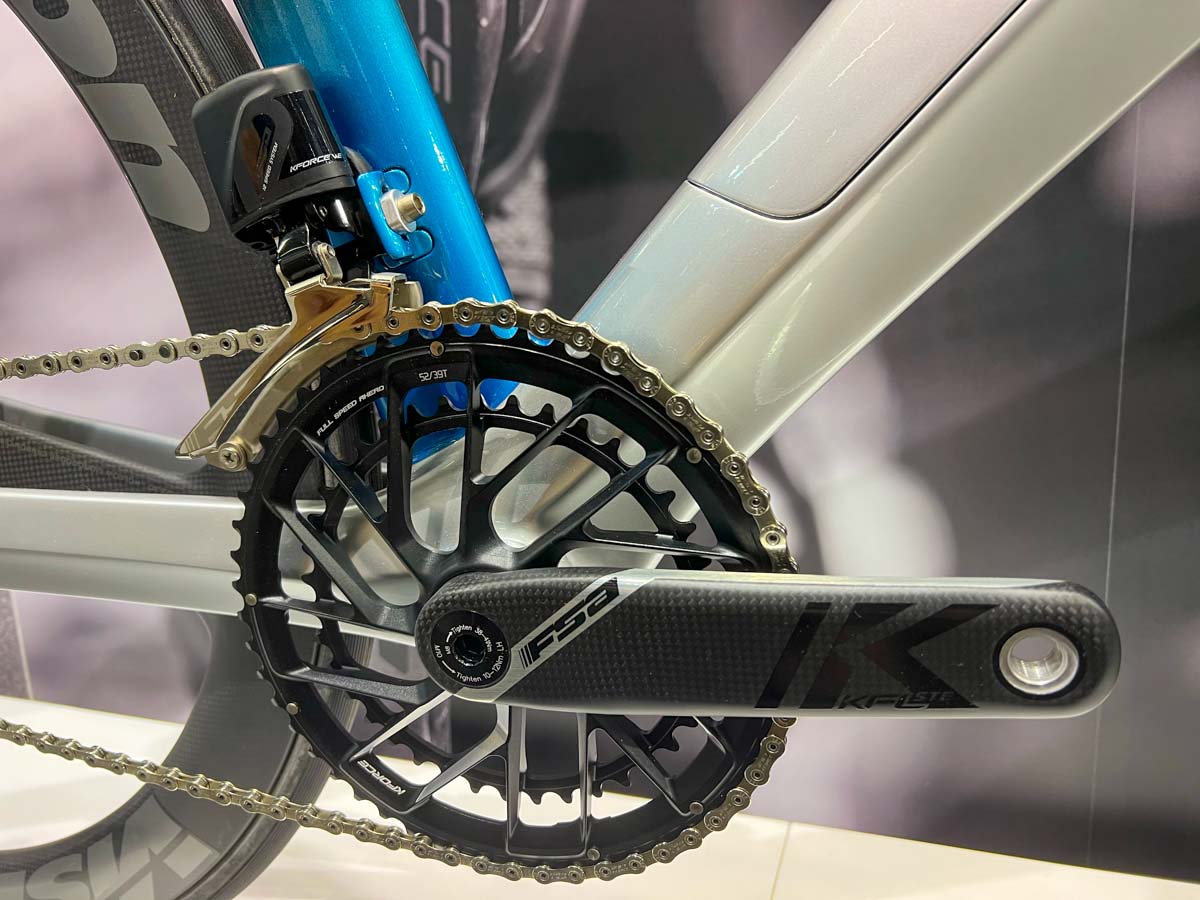 The new FSA K-Force WE crankset is slightly different from the previous iteration. The design team seems to have dropped the bright red WE logo and opted for a more subdued graphics package. The crankset is more like the modular cranksets that FSA uses for its mountain bike and gravel offerings. With 3K hollow carbon fiber arms and a 30mm (BB386Evo) alloy spindle. 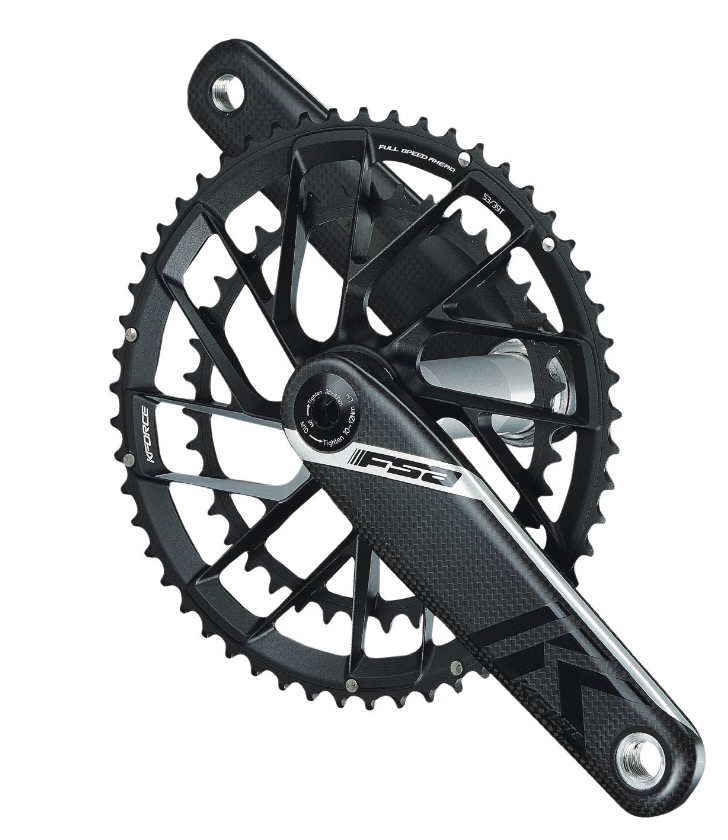 The nice thing about having the modular package is the ability to quickly change chainrings without needing a specific BCD for compact or standard. This method also allows FSA to craft CNC machined chainrings, similar to the gravel offerings they currently have. 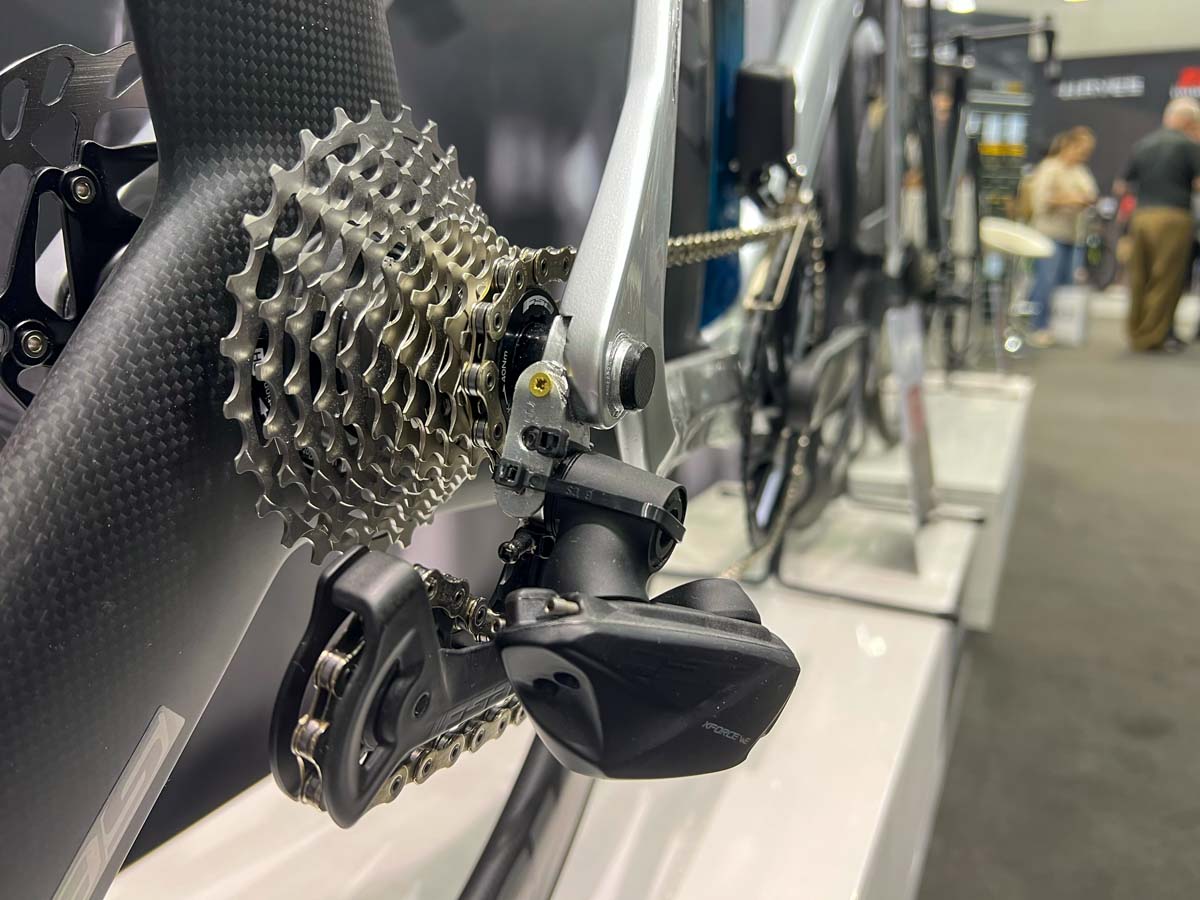 Sometimes prototype frames need a little help to make it to the show.

The cassette on the previous version of the WE group was a standout, crafted from cast and heat-treated titanium mounted to a matte carbon fiber spider. The finished product is lightweight and eye-catching. It’s no surprise the design stuck around, FSA claims the new cassette to be 13% lighter than its predecessor, which is hard to believe with the extra cog, but we’ll have to wait and see when the groupset arrives. 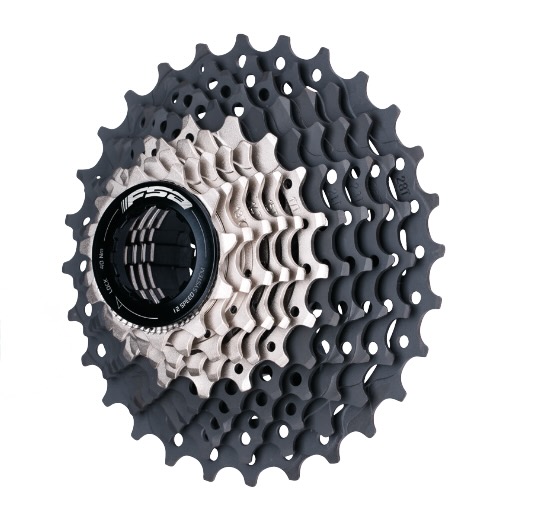 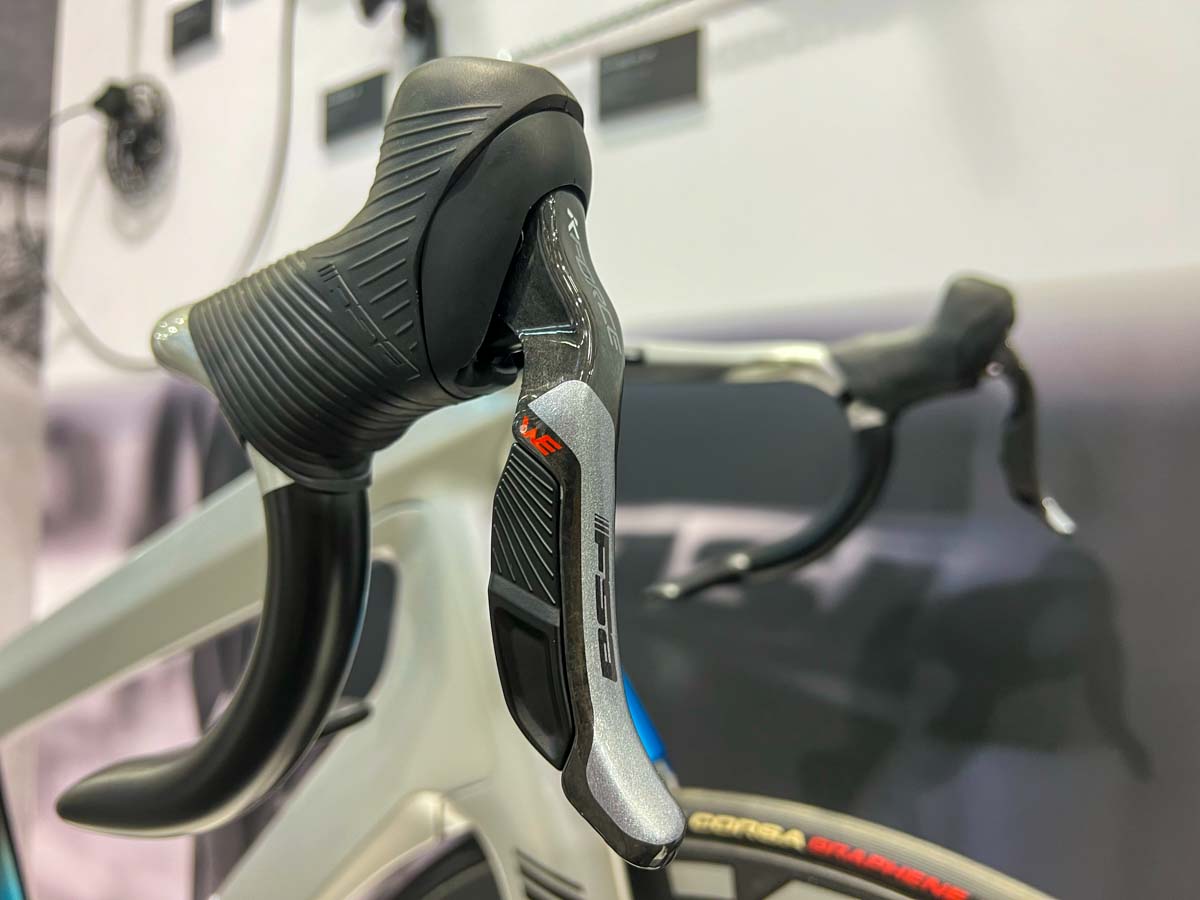 From what we can see, the shifters and brake calipers didn’t go through much of a revamp, which is a good thing. The ergonomics are excellent, and the shifter buttons are easy to access. There is no mention if they are still offering a smaller compact shifter size option like the WE 11-spd, but we’ll have to wait and see.

The shifters still operate wirelessly from the derailleur system, use CR2032 batteries for power, and have a weight of 405g per pair. 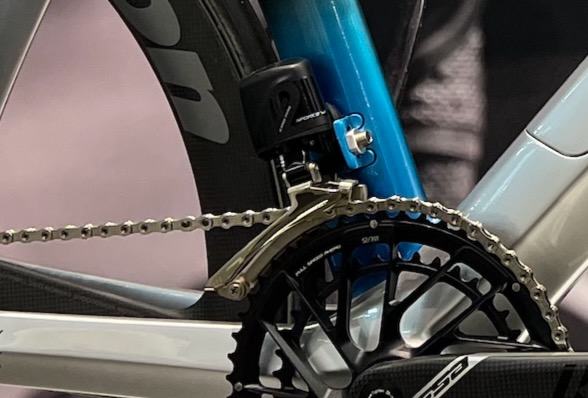 The central hub for most of the shifting for the WE group was the front derailleur, which seems to have changed slightly. The front derailleur now only controls its shifting, not that of the rear as well like the previous version. FSA claims the new WE front derailleur shifts in 70ms, but the visuals have not changed.

The front derailleur is still the powerhouse, operating from the same central battery as the rear, and used for shifting adjustments and power. The braze-on style front derailleur works with 54/40t, 52/39t, 50/34t, and 46/30t configurations and has a claimed weight of 159g. 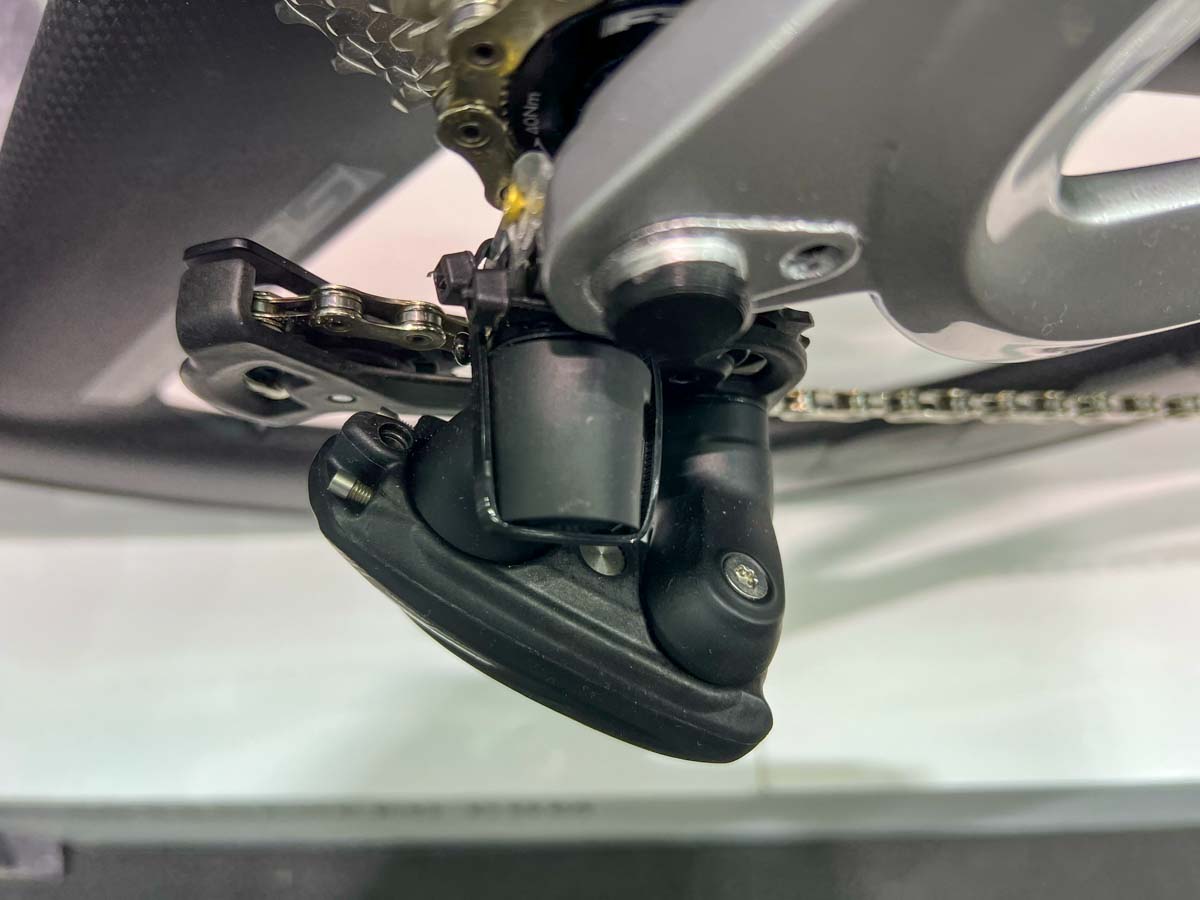 The FSA K-Force WE rear derailleur receives an electronics update and an updated sensor that delivers more accurate shifting. 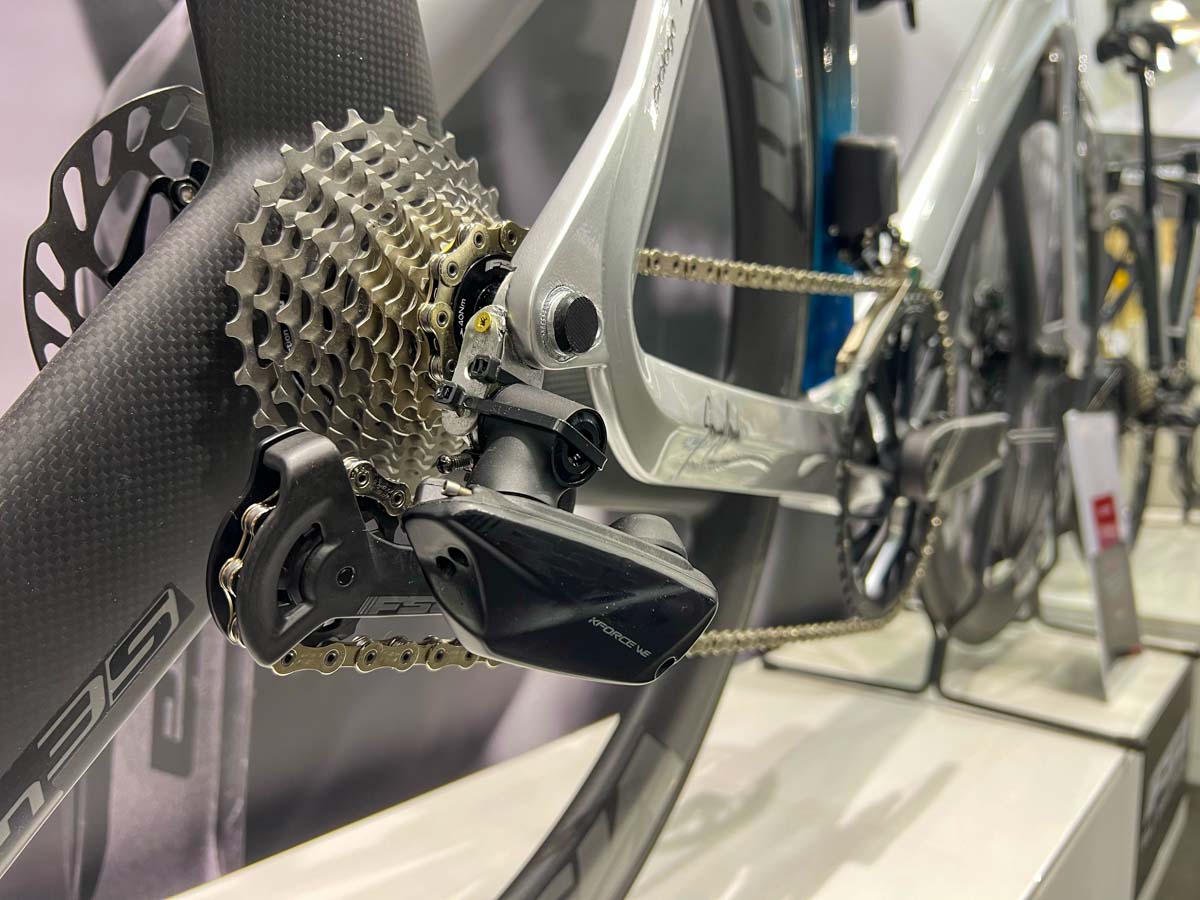 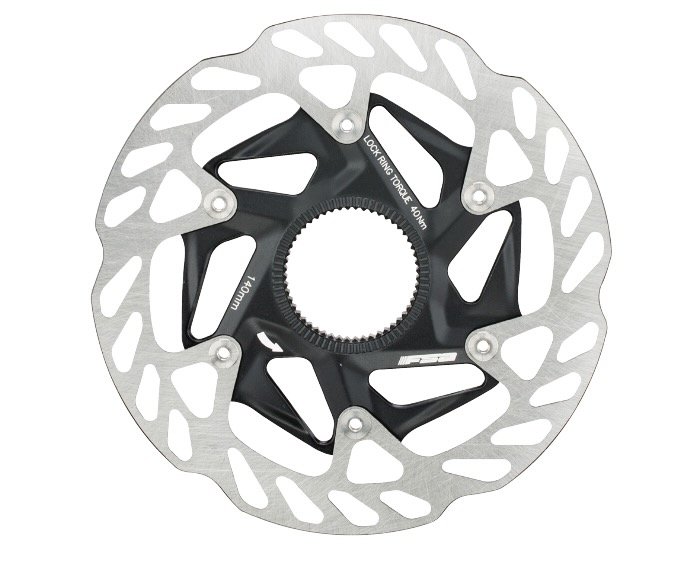 FSA K-Force WE Rotors and chains

The FSA WE rotors seem to have gotten a cosmetic make-over and now offer a center lock version of the previously 6-bolt-only designs. The rotors, from our experience, are on par with the top in the braking world, coming in 160mm (125g) and 140mm (103g).

Missing from the equation is the rim brake options; it seems that FSA feels that disc brakes are the only way to go forward. 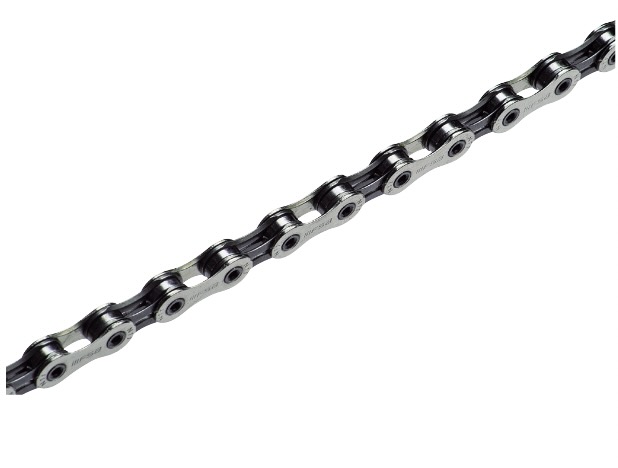 There is not much information on the new FSA WE 12-spd chain other than its 5.6mm width and claimed weight: 250g for 116 links. From our review experience with the previous version of the FSA, WE 11-spd chain, it’s reminiscent of a KMC and employs the KMC quick link. 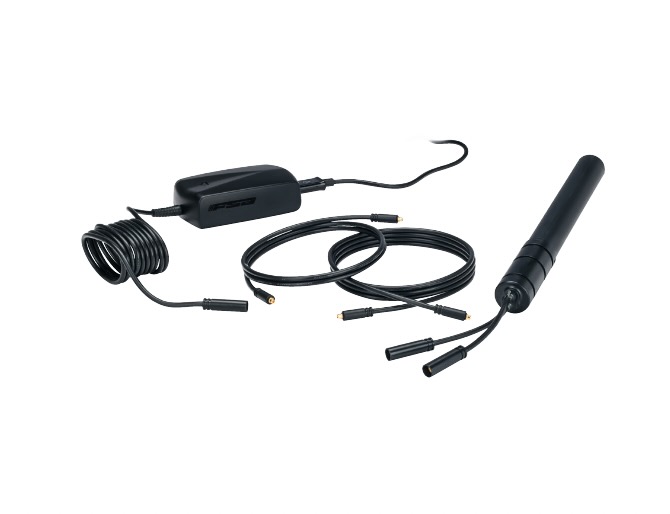 FSA WE battery and wires

We can see that battery, wires, and charging ports for the new FSA WE 12-spd are the same, with a 1,100mAh capacity and propriety FSA WE charger.

I didn’t realize FSA was an Italian company.

They are not (Italian) they are Taiwanese.

Seattle based, but bought by the Italians years ago.

Only development group is located near Bergamo. TH Industries, main office in TW, is the biggest OEM supplier of bike parts in the world.

Im sorry, but its too little too late. No one is gonna buy this, it’s outdated, irrelevant, and offers no advantage to the market. It looks terrible and will be impossible to source parts when they discontinue it.

Outdated and irrelevant how?

I seem to remember FSA WE gen1 creating the template Shimano used for its semi-wireless 12-speed Di2 groupsets.

Only real downside I see with WE12 is stingy low range on its cassettes (everything Shimano 12-speed goes to 34T), but that’s partially offset by the 46/30T crank option.

Hi Jordan, perhaps some more research is in order (Italian Company????)
FSA are the house brand for Tien Hsin Industries Co Ltd Taiwan. Perhaps a trip to their factory in Taichung will inform your writing?

Their marketing HQ is in Milan, Italy, with manufacturing and global HQ in Taiwan. Thanks for the clarification.

i wouldn’t mind using one of this setups in a gravel 1×12 if only it accept bigger cassetes. I wonder if the system can work without the front derailleur. The previous one could not. Don’t forget, that the “new” Shimano DI2 copied the concept from FSA 3 years ago.

Seems like this is more 1x-friendly on paper, since each shifter talks to only one derailleur this time around. All that’s left to complete the 1x conversion would be a larger cassette and a suitable rear mech to match.

which Shimano has stolen what??? you have never seen prototypes of the first Di2, have you?

And cut that chain so it fits correctly!!!

Because more competition is good. More options for us.

It’s not as if WE gen1 was all that terrible. It was actually rather well reviewed…and Shimano basically stole FSA’s semi-wireless concept for 12-speed Di2. Why people conveniently ignore this historical truth, I have no idea.

Whether or not FSA puts a more serious attempt into marketing K-Force WE12 and stoking customer adoption still remains to be seen.

you have never seen prototypes of the first Di2, have you?

Can you share some links, year when was that?

Another promising groupset that I will never, ever see anywhere but on web pages.