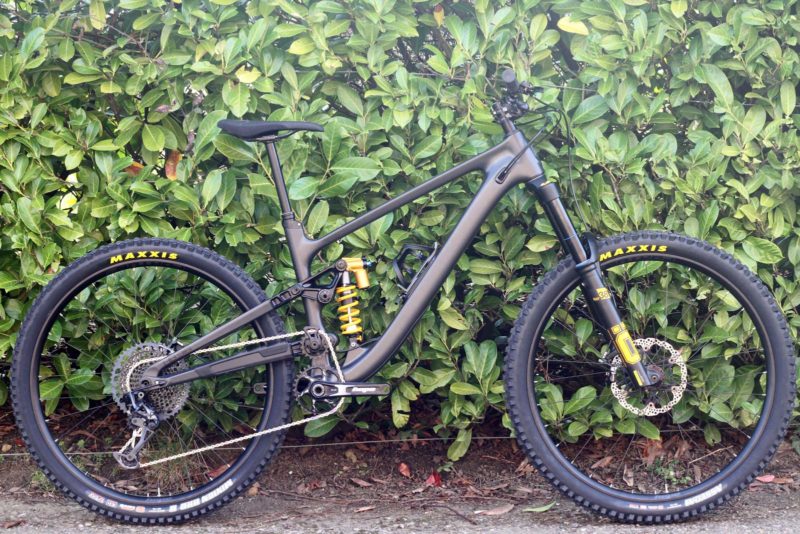 The secret has been out for a long while now; Hope has a new enduro race bike in the works, and it has a high-pivot suspension platform. We spotted a prototype at EWS Tweed Valley last season; the bike of Ian Austermuhle who took 2nd place in the Master’s Cat. That bike featured an alloy rear end, updated now to a carbon swingarm on the three HB.916 bikes we saw at CORE Bike.

Finally, we are able to share with you all the details on this UK made high-pivot enduro bike. Hope engineer, Sam Gibbs, gave us the low-down.

The HB.916 was designed as an out-and-out race bike, longer, slacker and faster than the HB.160 that came before it. Yes, it’s a high-pivot, but by no means the highest we’ve seen. Designer Sam Gibbs describes it as a “semi” high-pivot, the location of which has been tweaked through multiple iterations, tested by their team riders (including Joe Barnes) before arriving at what you see here. 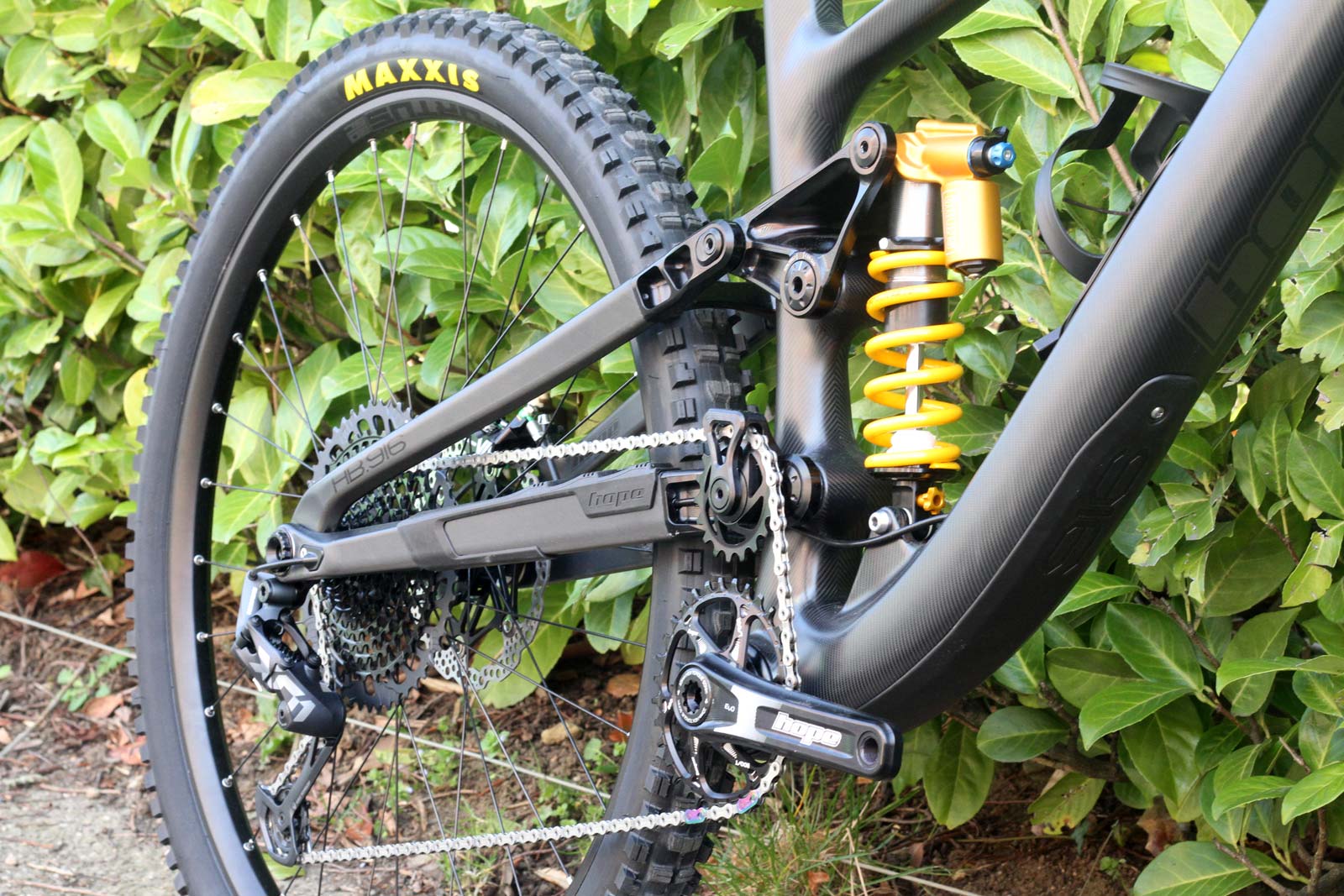 The linkage delivers 170mm of rear wheel travel, sending the axle rearwards through around 2/3 of the travel increasing the rear-centre length by 9.5mm before coming forward again by around 4mm toward the end of the travel.

Sam tells us this helps to keep the bike balanced for when you’re really hammering on, with rider weight centered on the bike. A neutral-handling bike is what they were after. The HB.916 is largely designed for a coil rear shock. The linkage boasts 26% overall progression; Sam says they took that as far as they could while keeping the suspension platform compatible with an air shock. 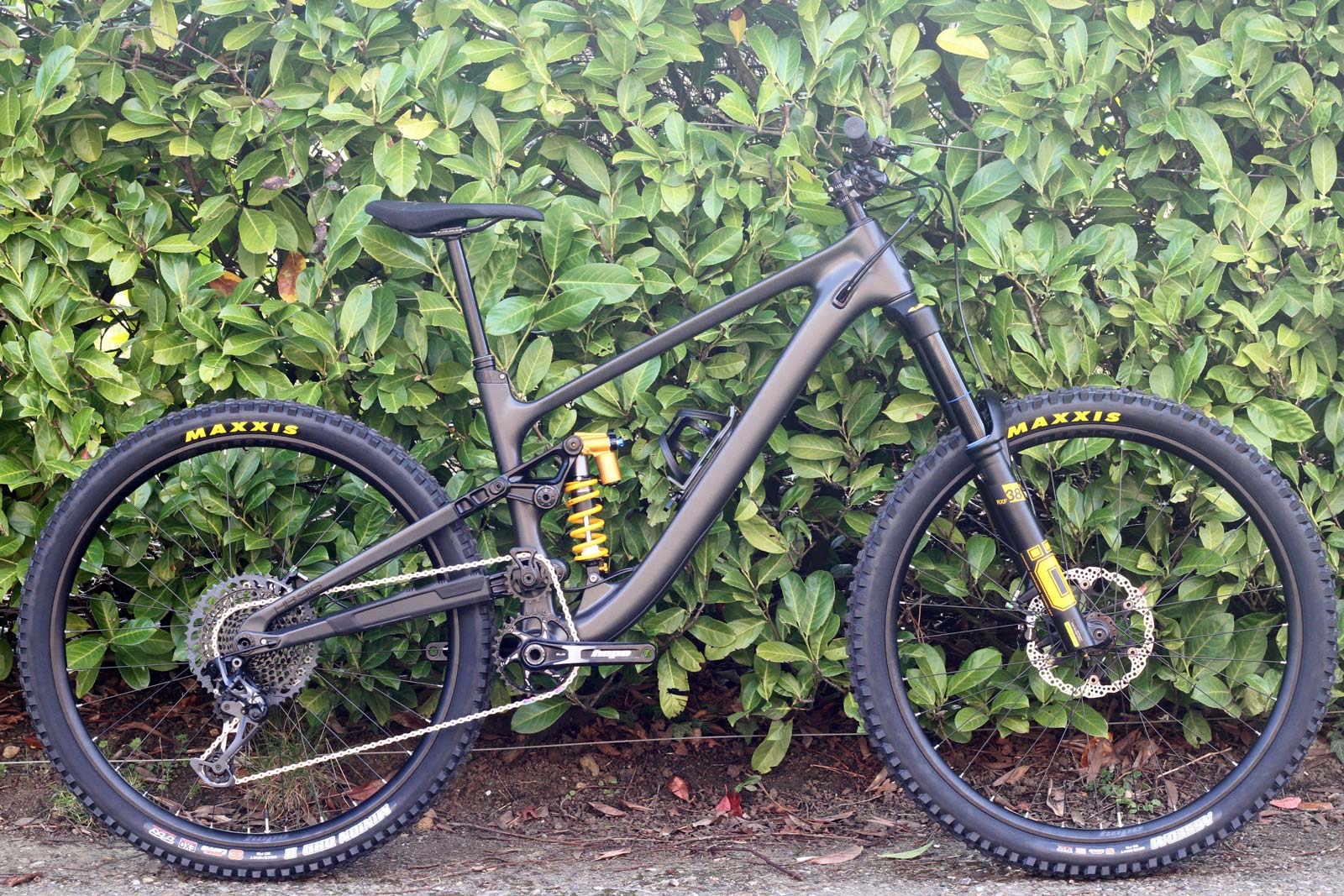 That 170mm rear wheel travel is paired with a 170mm fork with a 44mm offset. As a complete 29er, the HB.916 has two geometry settings; standard and slack. Switching between the two involves flipping the orientation of the headset cups. In the standard setting, the head angle is already fairly slack at 64°, with the actual seat tube angle around 75.5°. Chainstay length is fixed at 440mm, consistent across the H1-H4 size range. 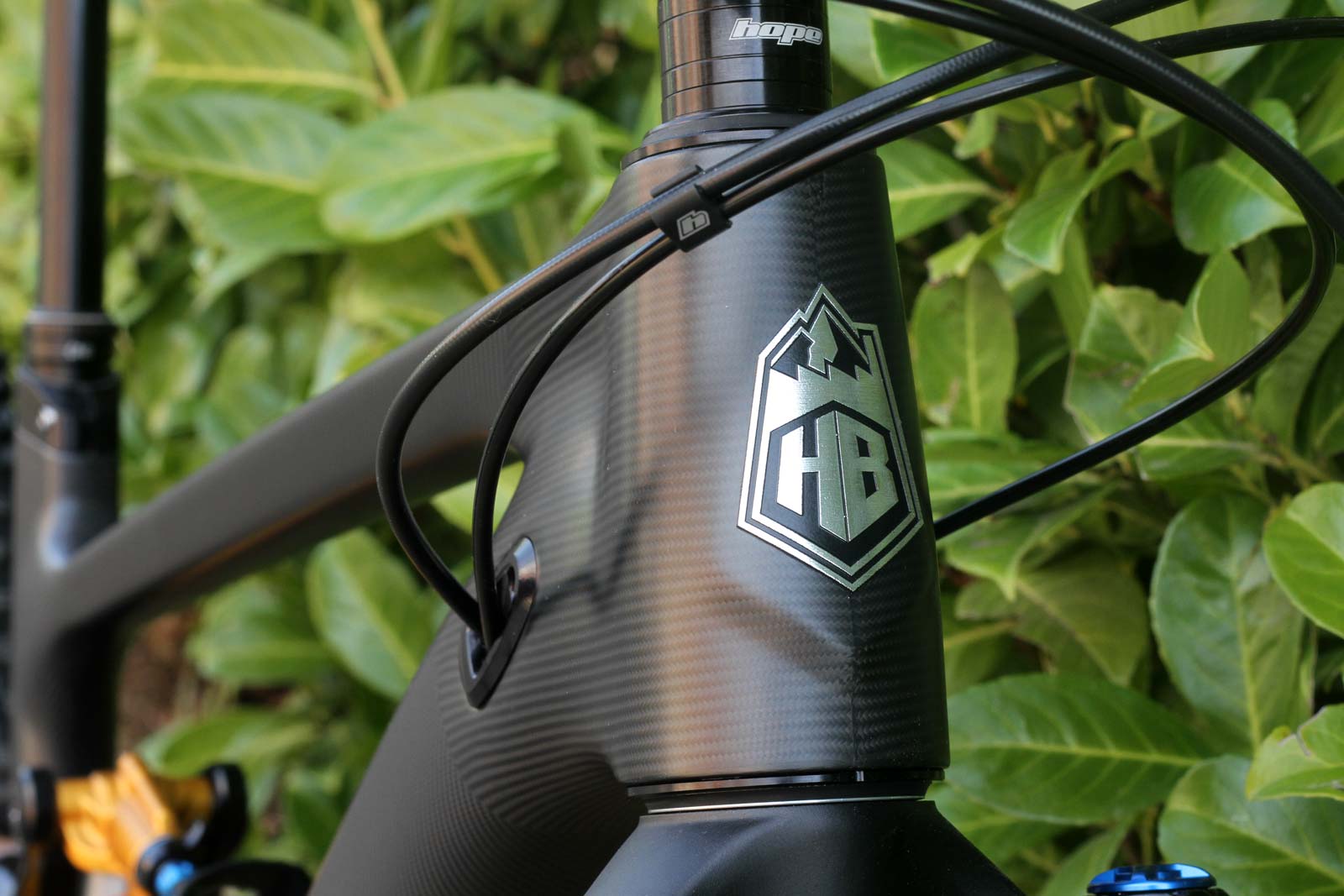 The HB.916 is generous in its reach measurements, with the smallest bike (H1) boasting a reach figure of 450mm. That tops out at 510mm on the largest frame, the H4. Seat tubes are kept relatively short for compatibility with long travel dropper seat posts, ranging from 395mm to 470mm.

Switching from standard to slack alters the head angle from 64° to 63.2°, concomitantly decreasing reach by 3mm and increasing the wheelbase by 8mm. It also has the effect of lowering the BB height by 1.5mm down to 342.5mm and making the actual seat tube angle 0.2° steeper. 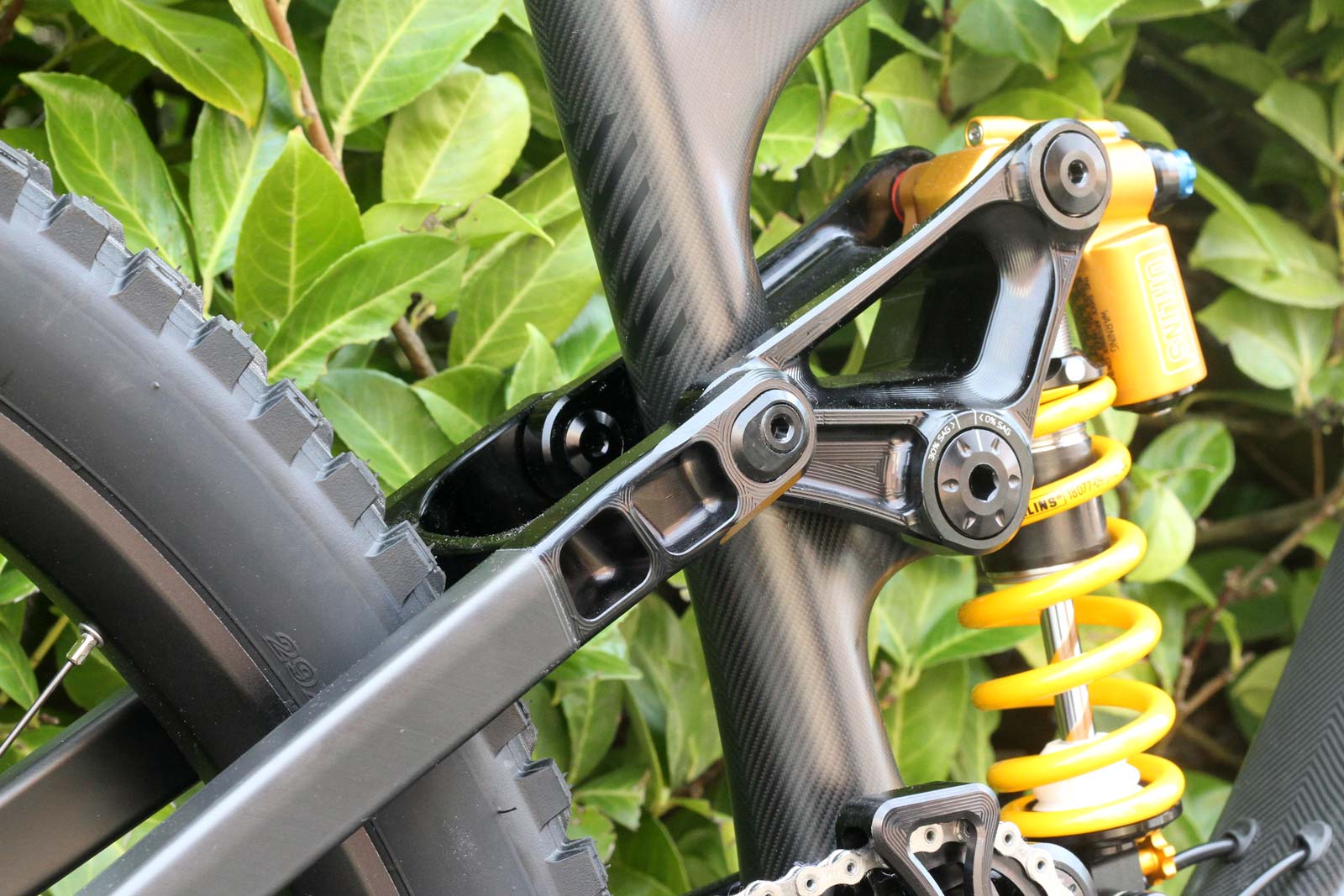 Note the presence of a flip-chip at the seat stay-rocker interface. This serves to correct the bike’s geometry when you switch out the 29″ rear wheel for a 27.5″. Hope don’t really recommend its use outside of a mullet setup. Thanks to the flip-chip, the only noteworthy geometry change arising from the switch to a mullet configuration is the 4mm shorter wheelbase. Of course, the BB drop is reduced as well, given that the rear axle is now much closer to the ground.

The front triangle is a one-piece design with the carbon fibres laid up by hand in Barnoldswick, England, just as the HB.160 and HB.130 frames were before it. As much as possible, Hope wanted to locate the pivot bearings inside aluminum parts for longevity reasons, hence why you see CNC machined aluminum yokes; one at the main pivot-chainstay interface and another at the seat stay-rocker interface. 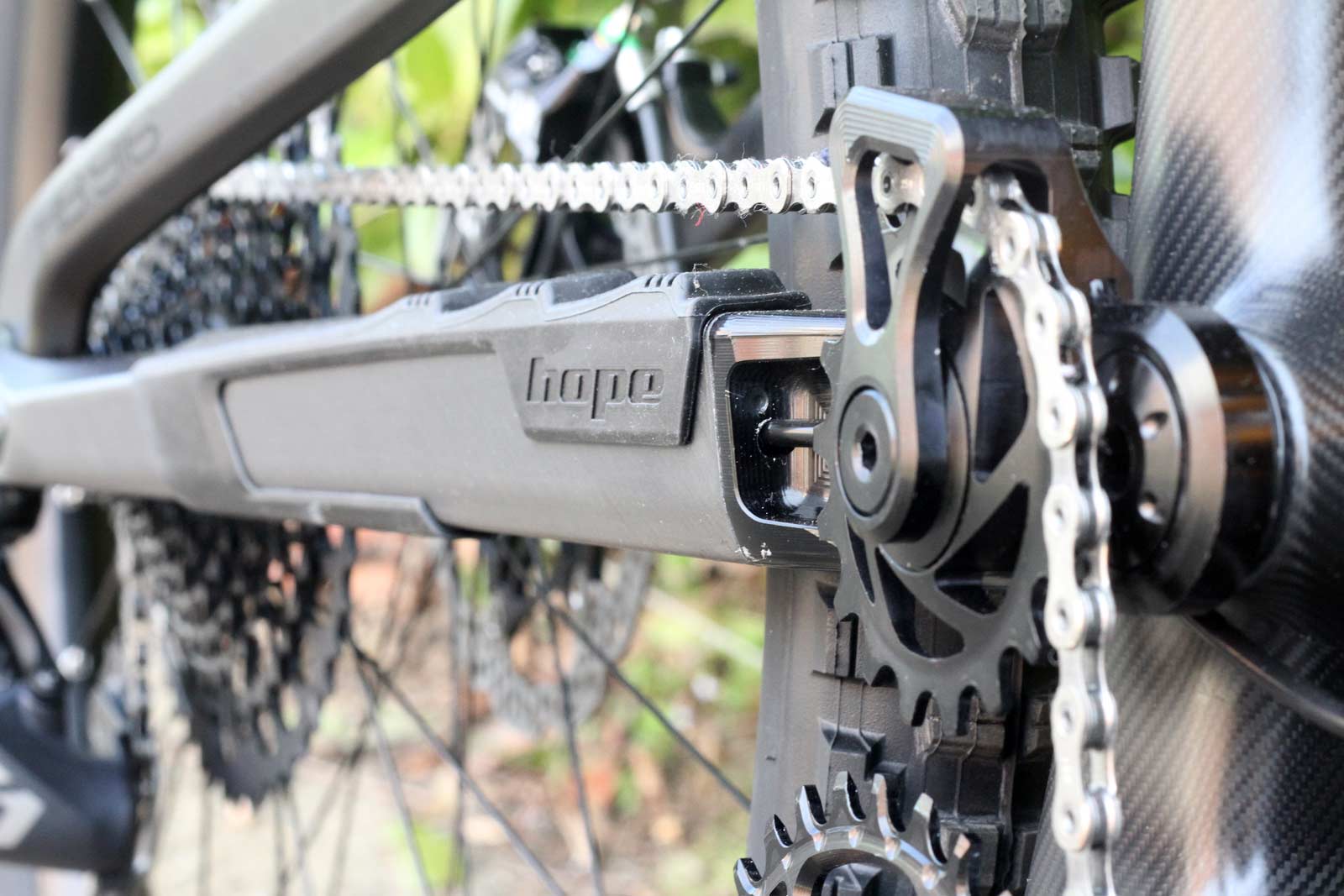 Those two pieces are each bonded to the carbon seat- and chain-stays using an epoxy resin and a special groove design. The surfaces are mechanically etched and cleaned before assembly, with the glue injected in afterwards to create a strong bonded joint. 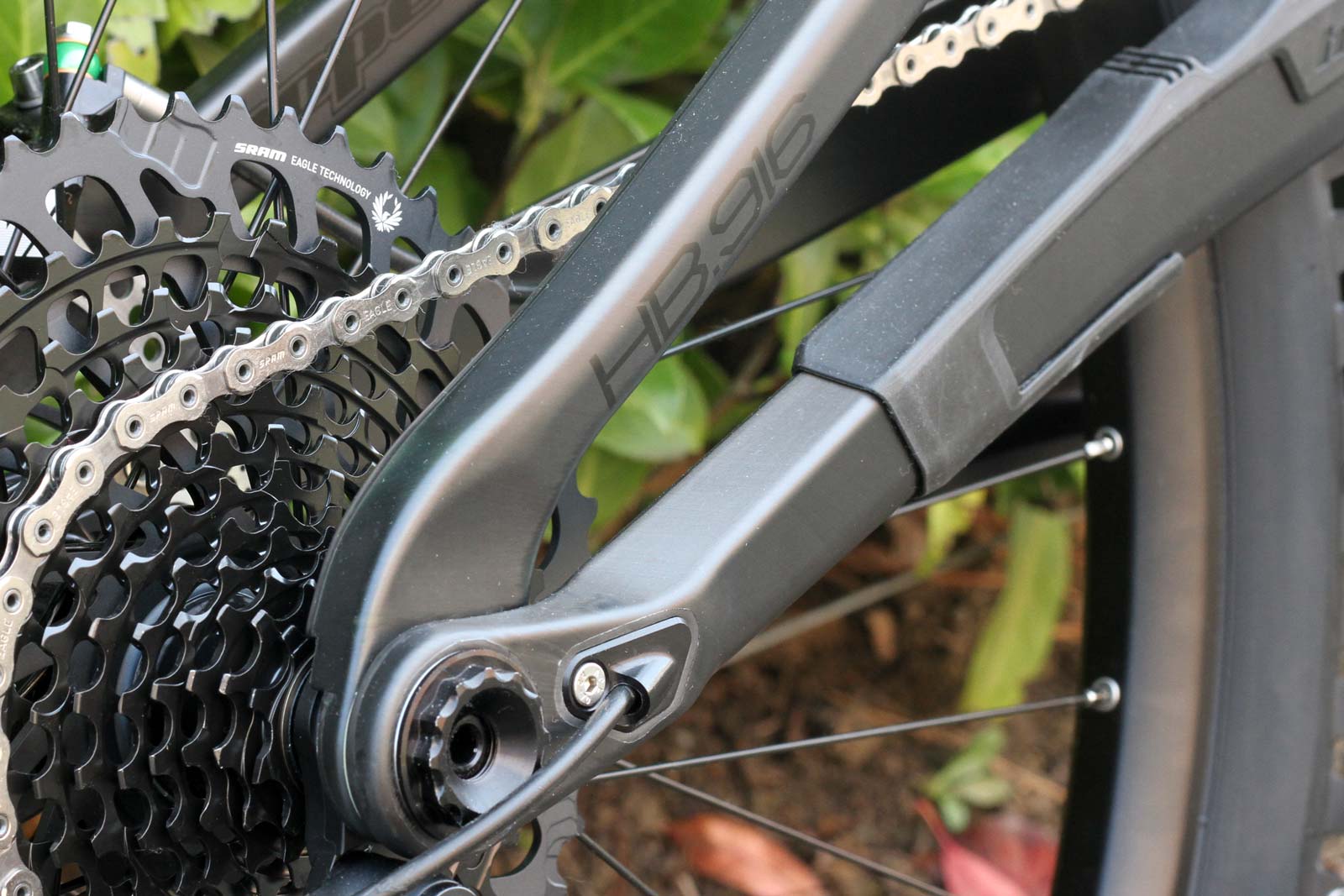 For the first time, Hope has added frame storage to the downtube with the “Butty Box”. The flip of a lever unlocks the cover (home to the bottle bosses) revealing a cavity underneath where you can store things like tools for trail-side repairs, water and snacks. 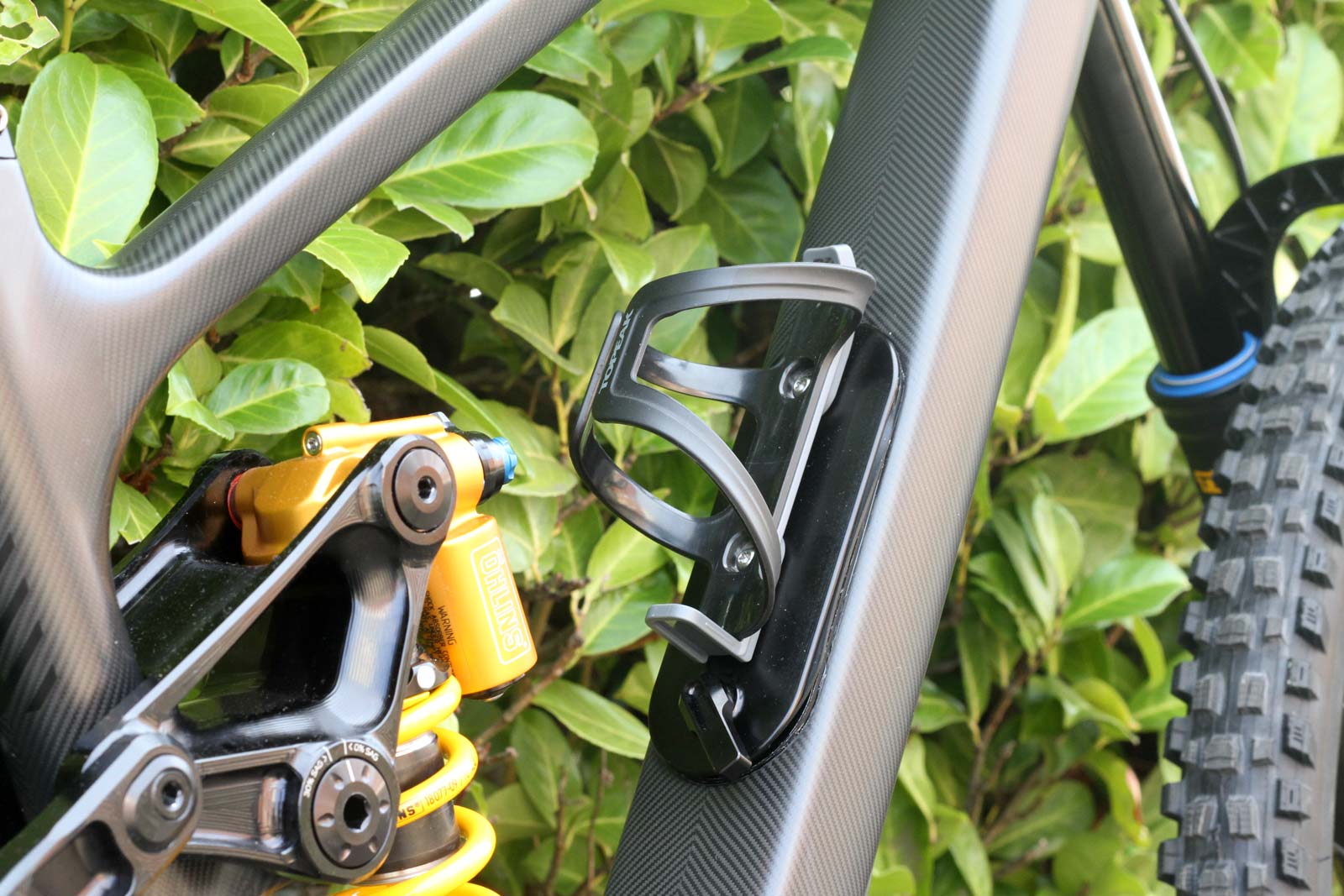 The seal on the Butty Box of this HB.916 didn’t fit particularly well; Hope are still refining the design of the frame storage.

This is not what the Butty Box will look like on the final production bike; that one will have an actual compartment underneath with some kind of bag inside to help prevent the content rattling about. Its absence on this frame does allow us to see how the internal cable routing is arranged, however. It isn’t quite tube-in-tube, but there are noise damping foam guides running almost the entire length of the frame, with one set of internal grommets securing the cables to the bottom wall of the downtube. 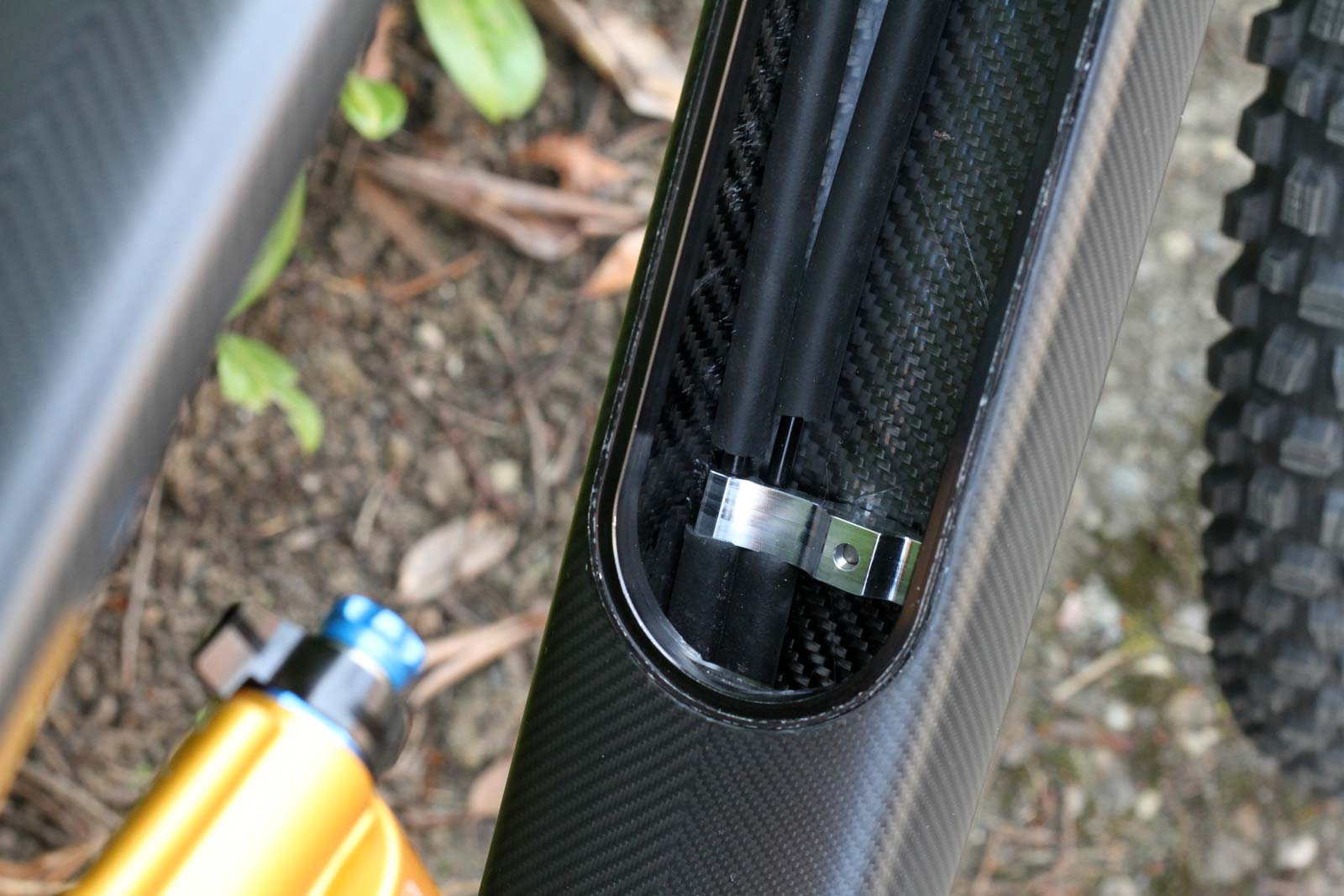 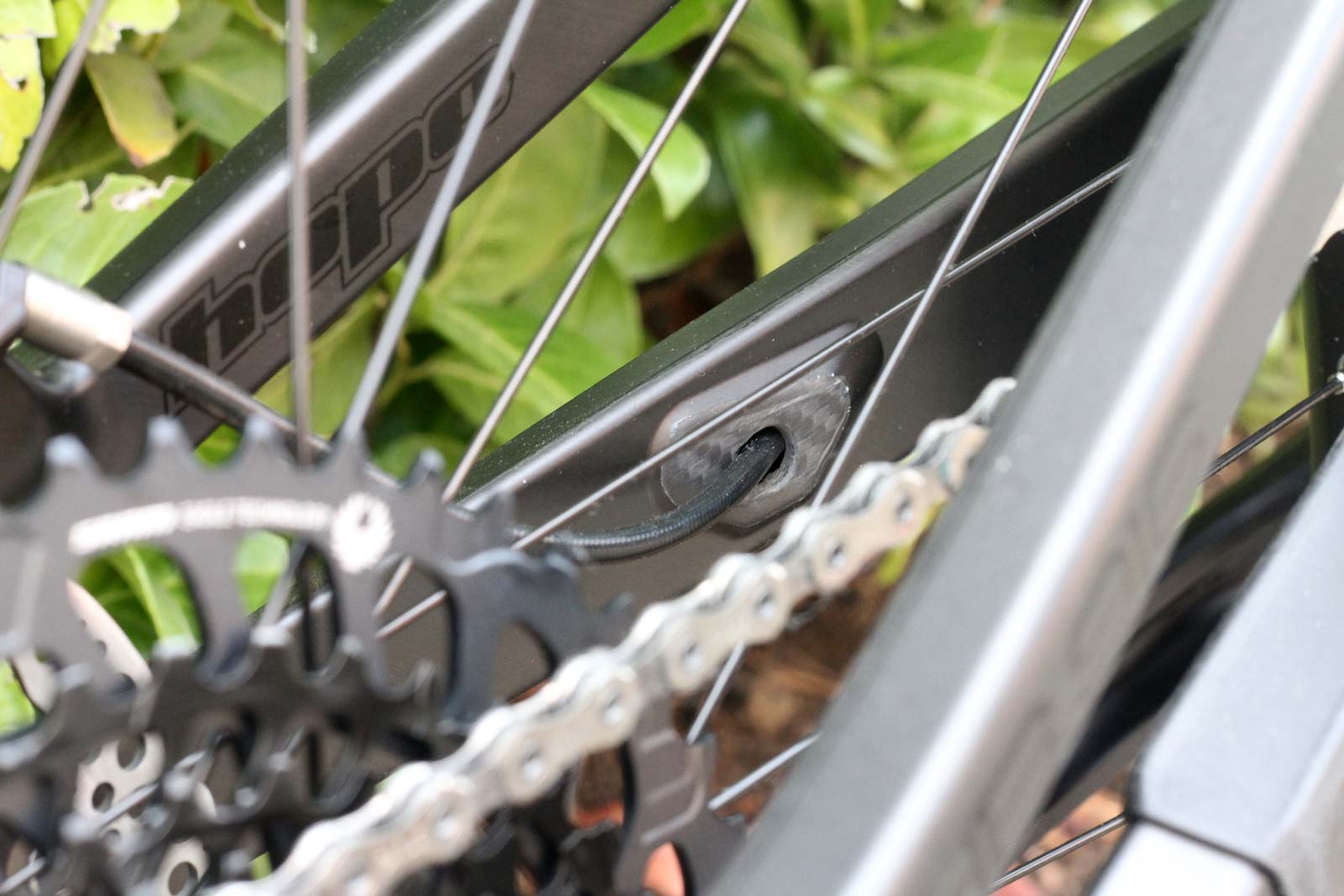 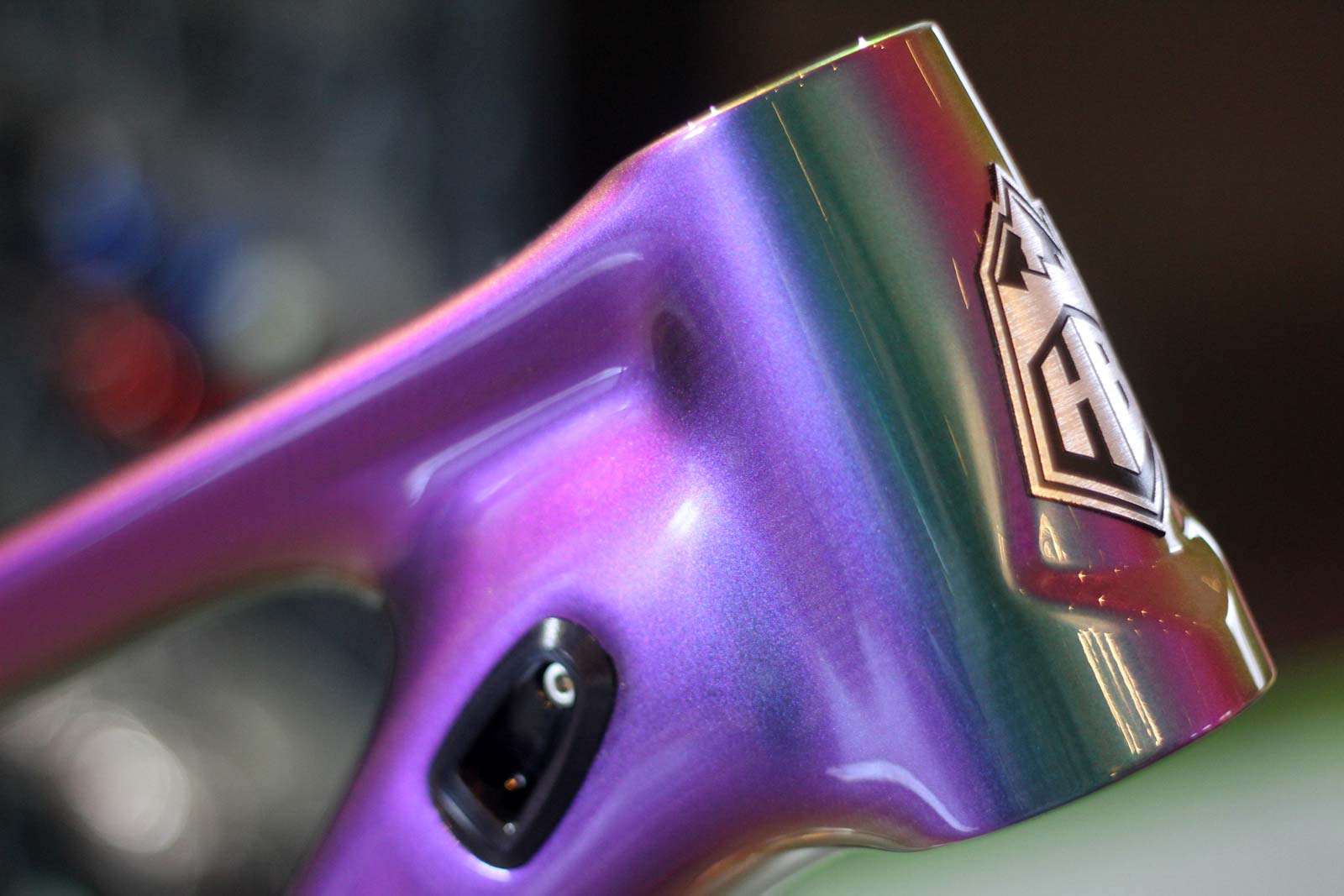 You can still see the carbon layup through the Chameleon paint

The Hope HB.916 wont be available to order until July 2022. The frameset, with shock, headset and T47 bottom bracket starts at £3595 in the Carbon colorway. It is also available with in the Neutral (Black and White) colorway for £3845 or the Chameleon colorway for £4095. 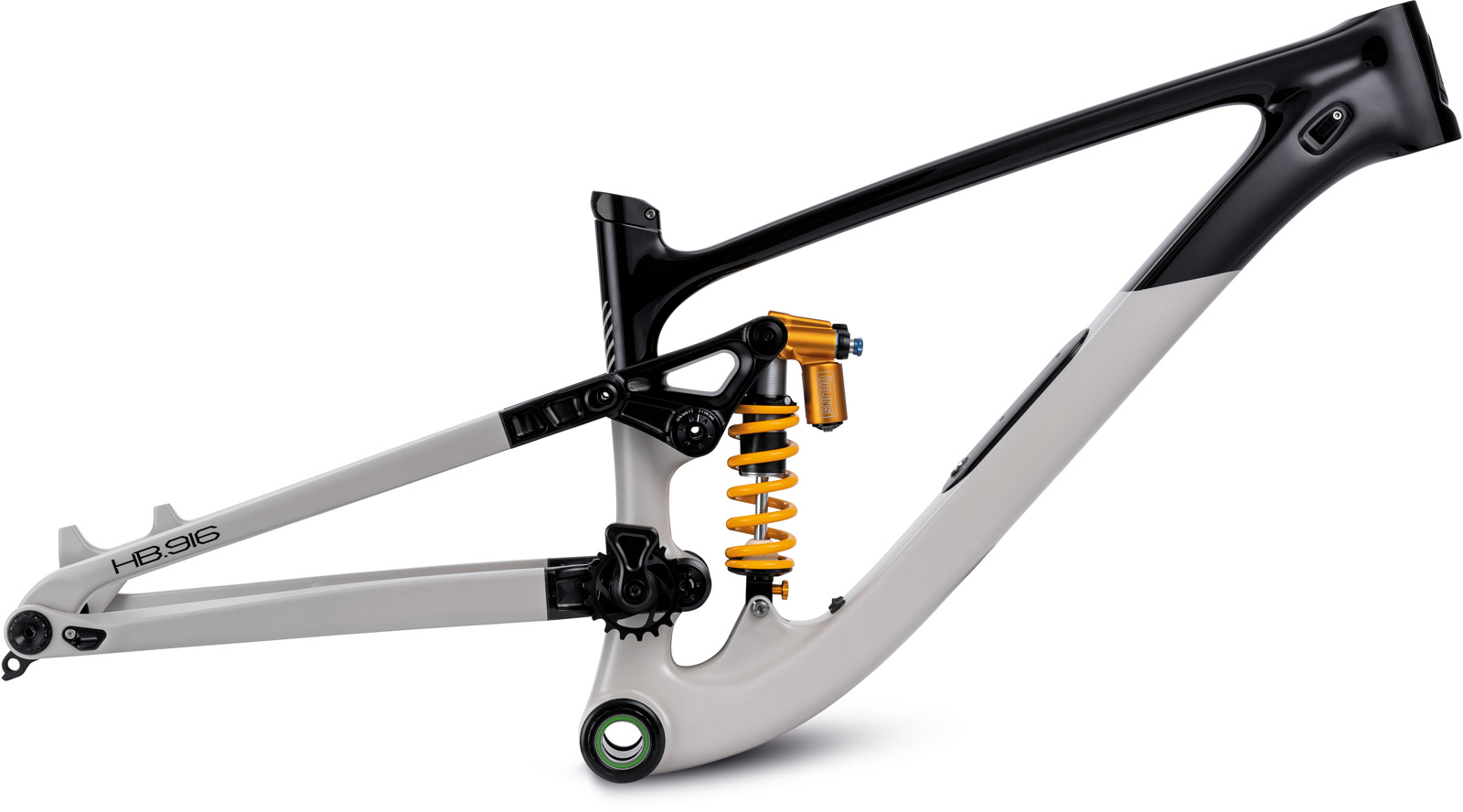 Hope will also be selling complete bikes, as well as almost complete bikes that lack a drivetrain – a sensible move given the current parts shortage. Pricing starts at £6995 for the Carbon colorway with an Ohlins RXF 38 Air fork, TTX22M Coil or Air Shock, OneUp V2 Dropper Post, SRAM XO1 12 Speed drivetrain with carbon cranks, Hope Fortus rims on PRO4 hubs with Maxxis Assegai (EXO) and DHR II (EXO+) tyres. Pretty much every other component is from Hope, including the new Tech 4 brakes. 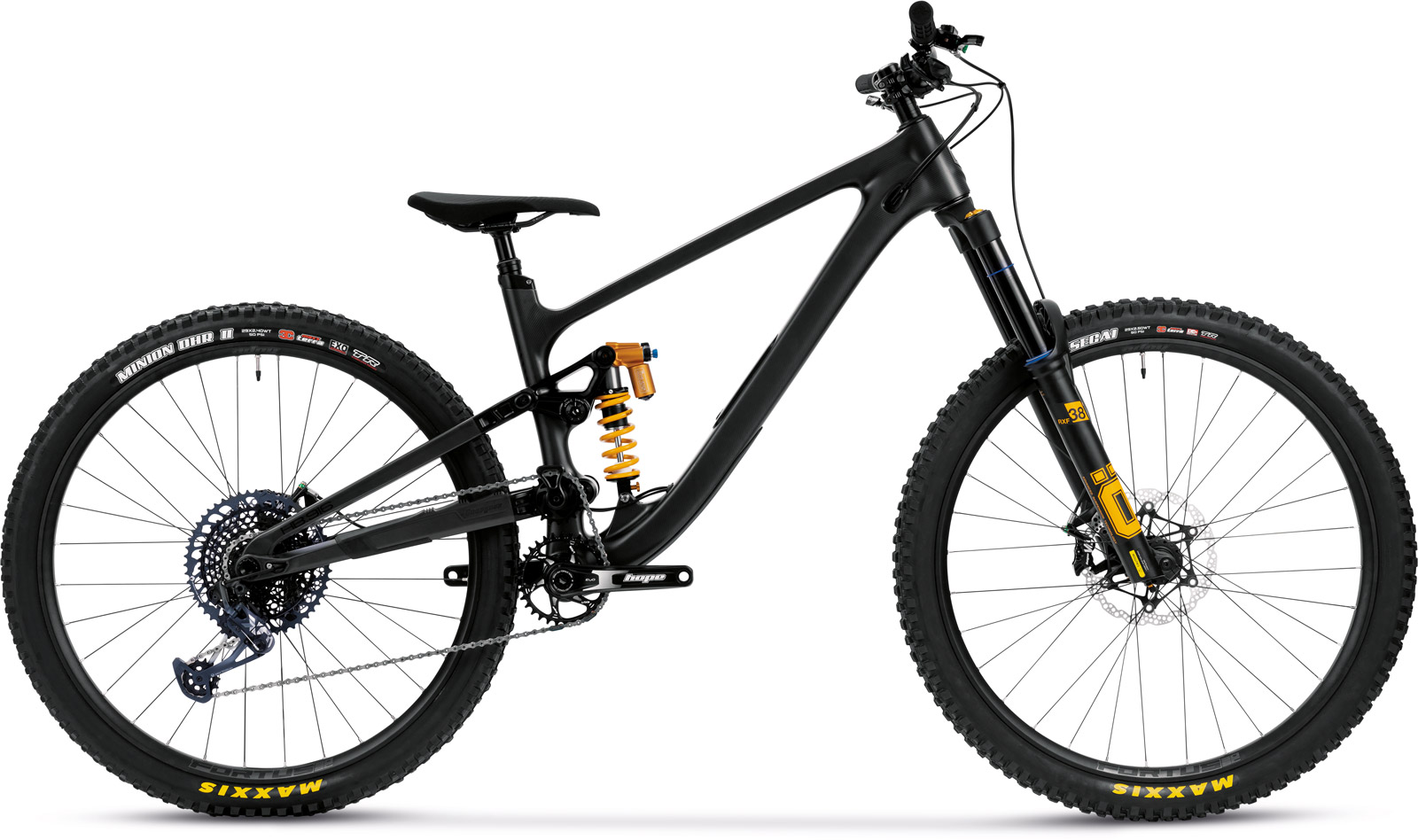 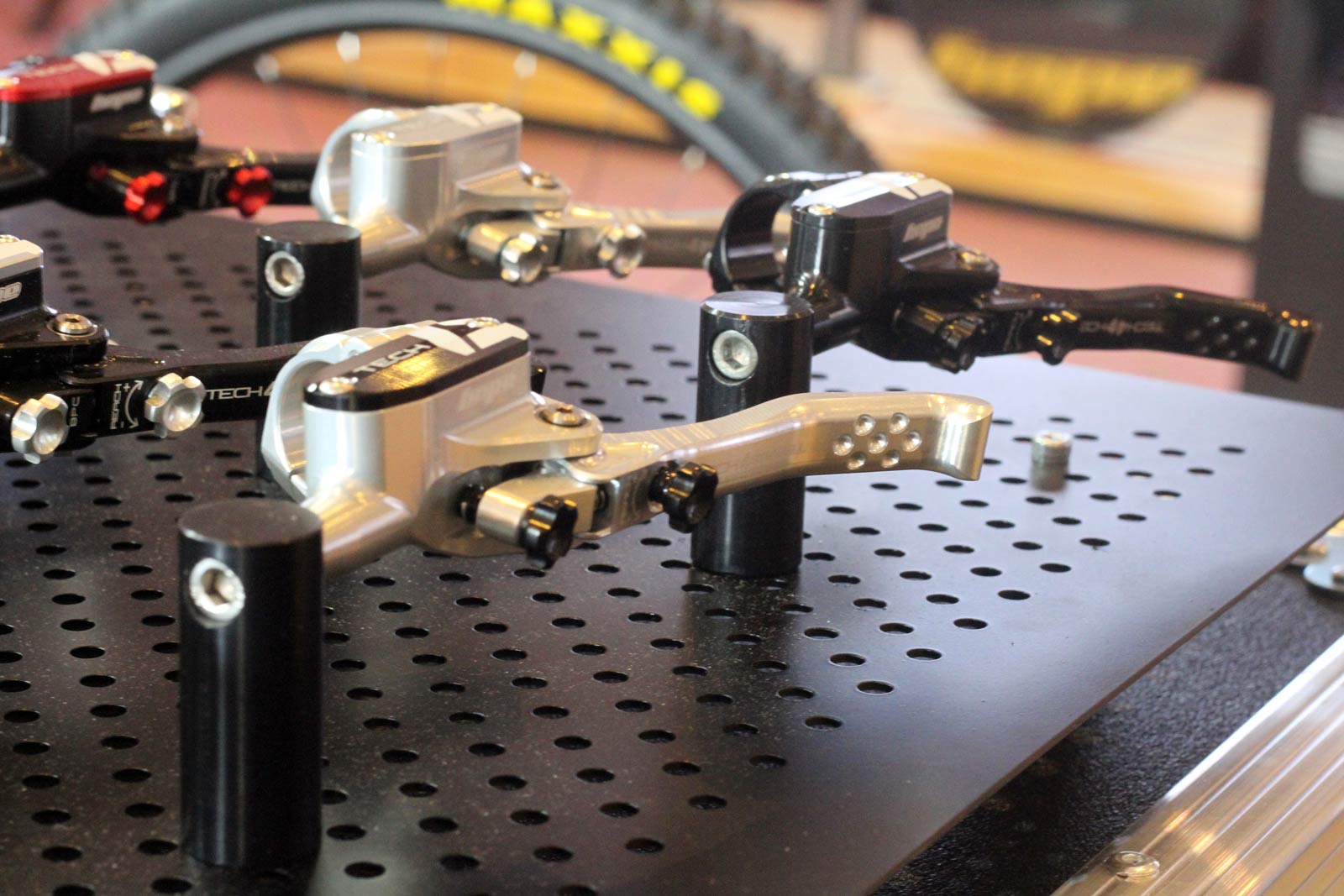 Hope had their new Tech 4 Lever on display too, said to deliver 30% more braking power

Holly f**k….great frame…but also GREAT price. This whole bike industry is getting freaking crazy. I wonder what’s the target group…I am out long time ago. 4000£ for a frame set