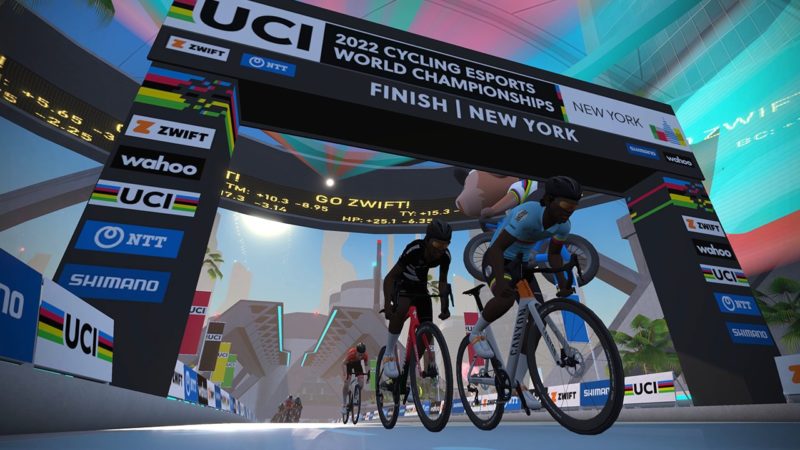 Ready or not, the 2022 UCI Cycling Esports World Championships are coming, and along with it, 180 of the world’s best esport cycling racers. On Feb 26th, the world-spanning virtual peloton will toe the virtual start line, ready to claim the rainbow stripes at Zwifts Knickerbocker Circuit. The course will be selective with a power zapping lumpy profile and a 16% grade hilltop finish. Coming out on top will require expert timing and tactical mastery to stay clear of the group. If you know anything about Zwift racing, this race will be hard from the gun, and we’re looking forward to watching it unfold.

We’re gonna walk you through the basics of cycling esports, the best ways to watch, and what to look for during the excitement. 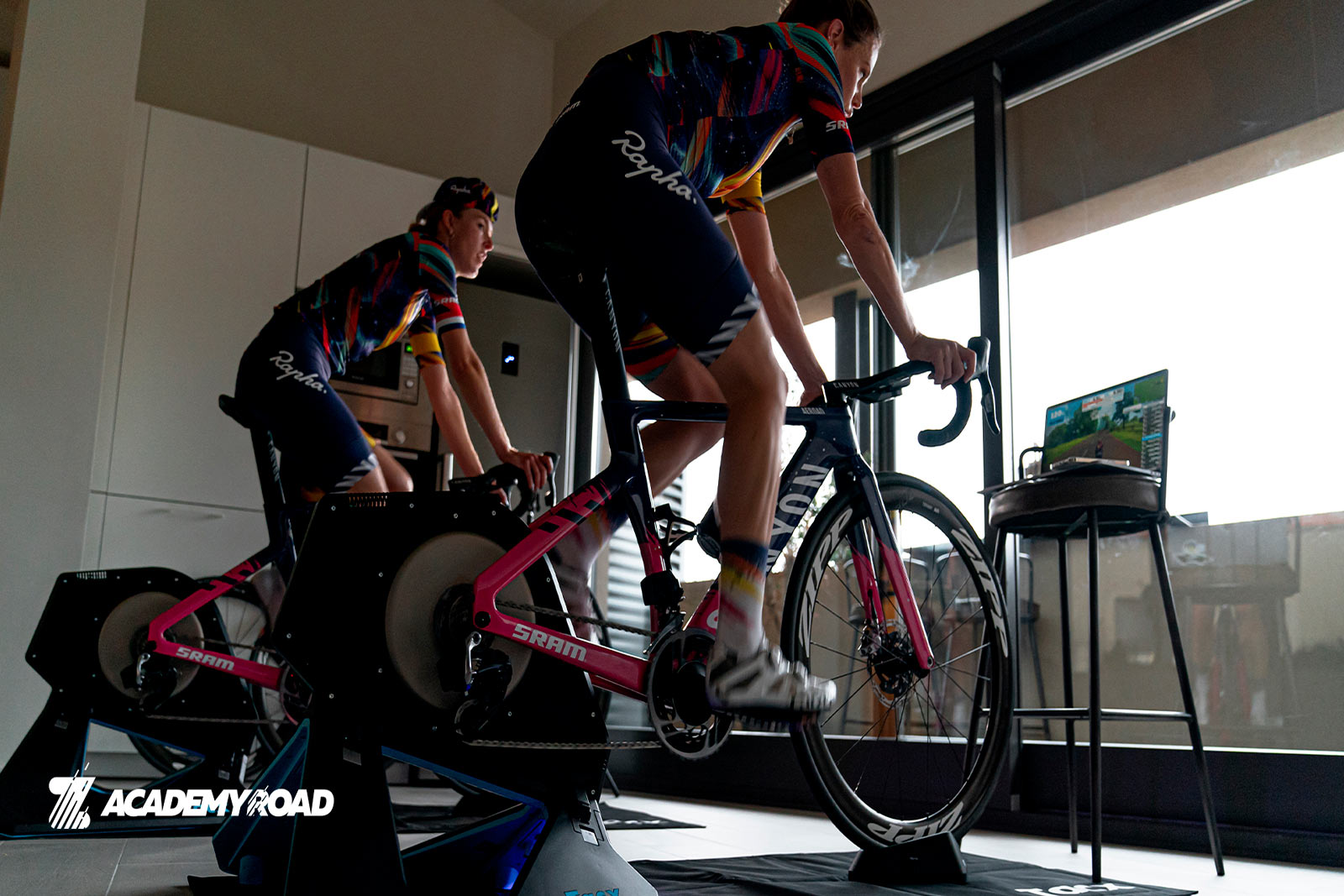 What the heck is cycling esports?

As of 2020, cycling esport is one of the nine recognized UCI cycling disciplines. Now in its second year, this unique (covid friendly) racing style is gaining followers because of its tactical nature and video game-style PowerUps that make it more than a watts to kilograms contest. 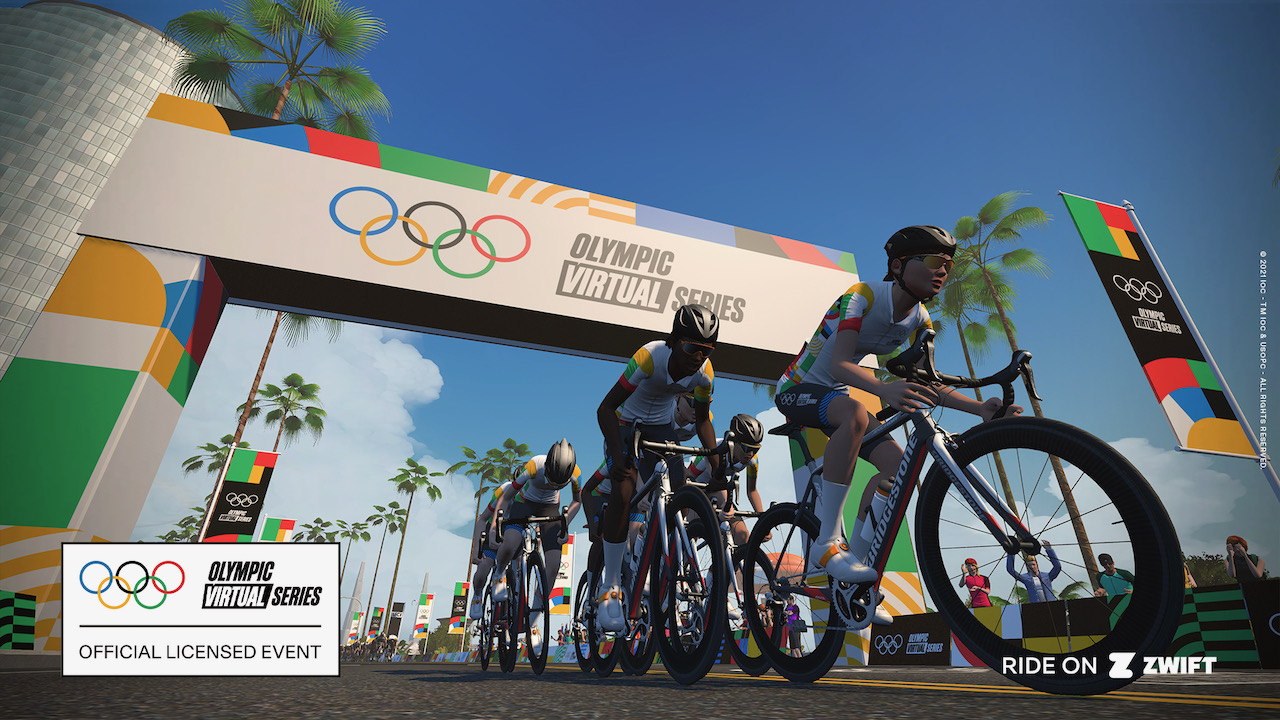 Riders compete in a virtual racecourse powered by Zwift where their real-world efforts are expressed by a cycling avatar competing against others around the globe. For the 2022 UCI Cycling Esports World Championships, all riders will compete on the same model of the Wahoo KICKR V5 Smart Trainer (with Direct Connect were guessing). Competitors will all be on different bikes and equipment, but having the same trainer allows the UCI to deliver consistency to the platform. Ensuring that all athletes will feel the same virtual gradients and simulated draft as the others. 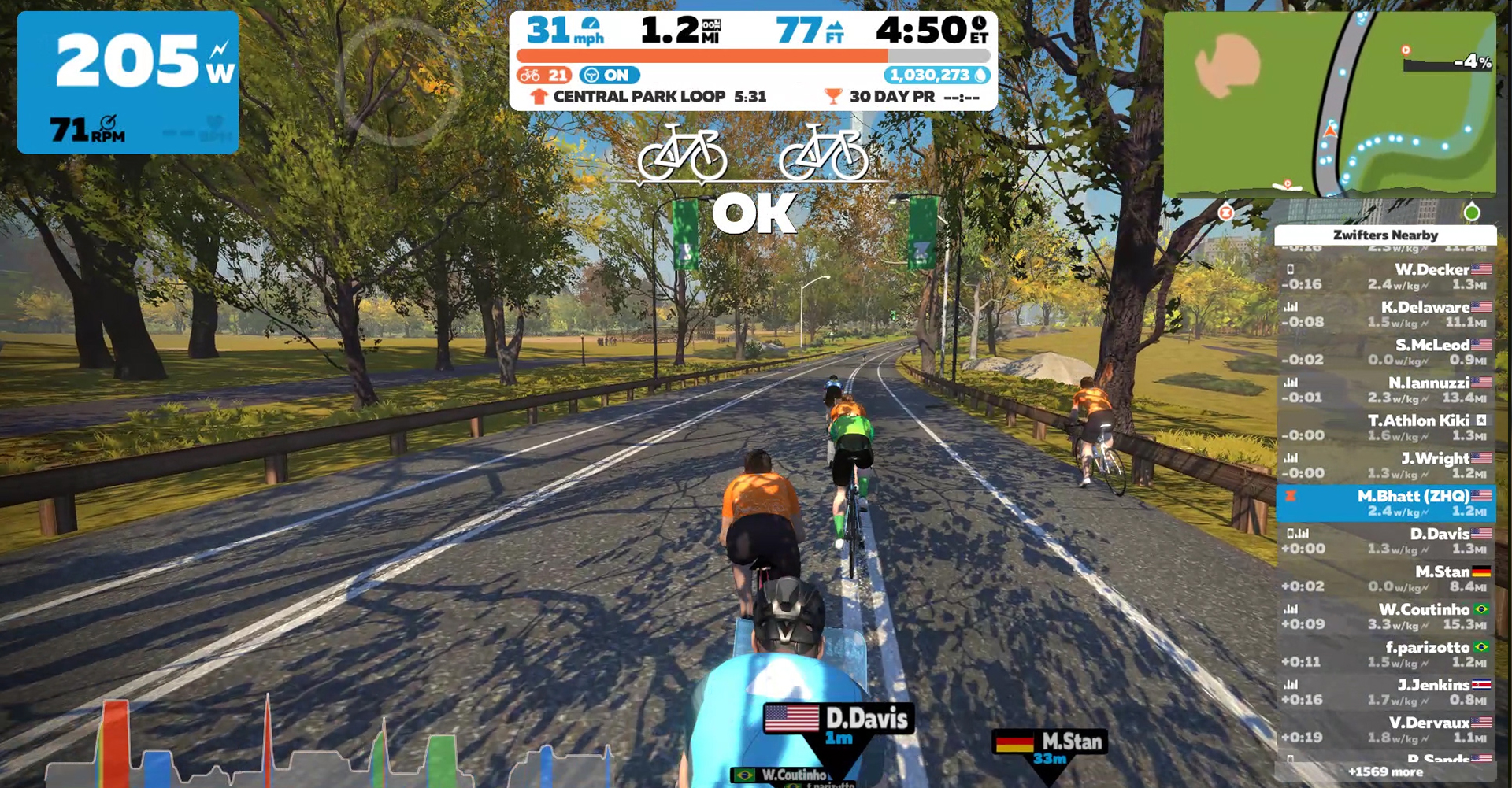 Something unique to cycling esports is PowerUps. These bring another layer of stratagem and gamification to the race; it’s fun for riders and viewers. These PowerUps can help you save energy, win a spirit, or make your avatar invisible to other riders — pretty cool. The PowerUps come in many forms, and racers will use them strategically during the race to achieve maximum benefit (exactly like Mario Cart). This ensures an exciting race and rewards the best tactician, not the most beastly rider. For the 2022 UCI Cycling Esports World Championships, riders will have only seven chances to secure PowerUps during the race. 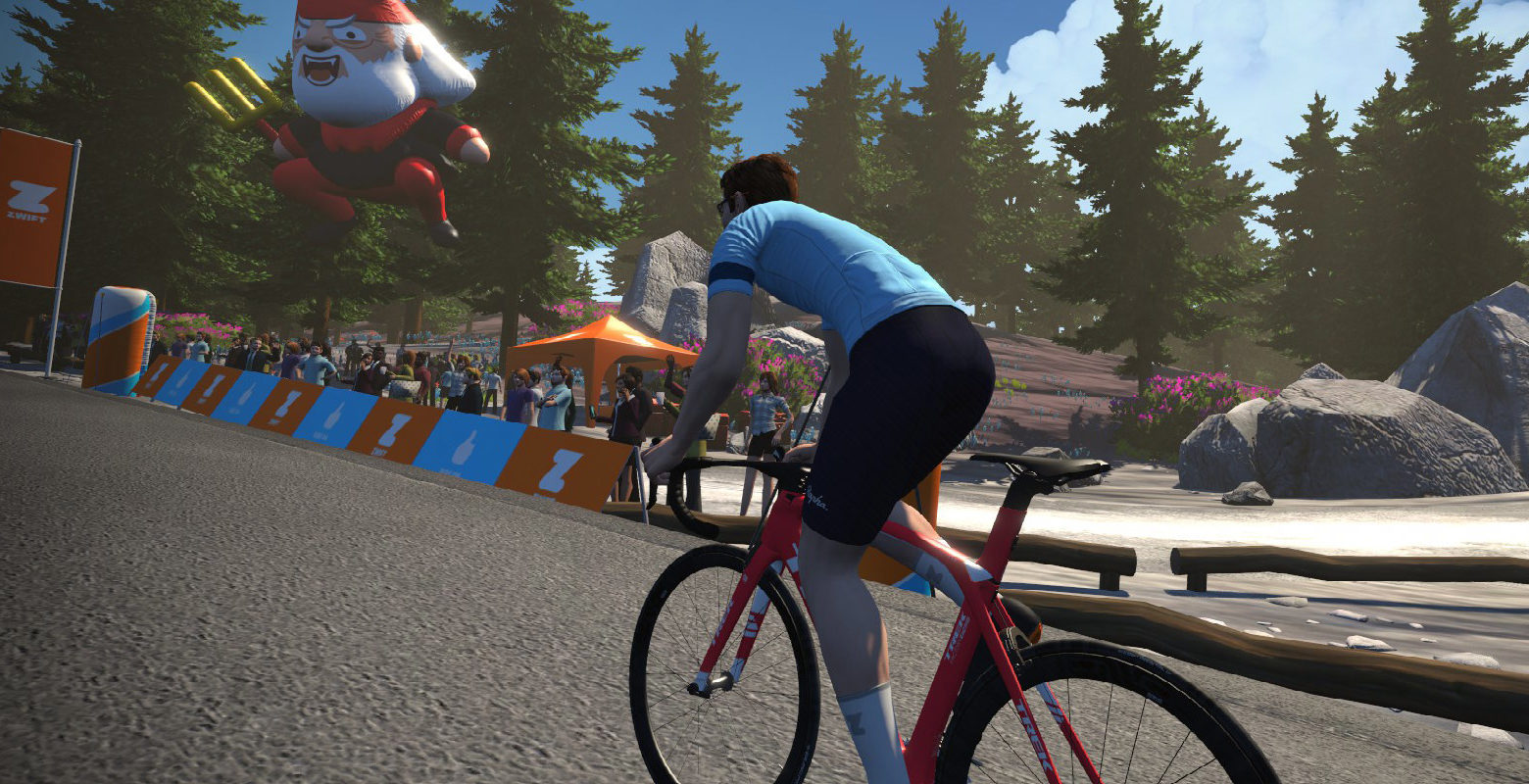 How do Zwift PowerUps work?

The three PowerUps for the 2022 UCI Cycling Esports World Championships are; 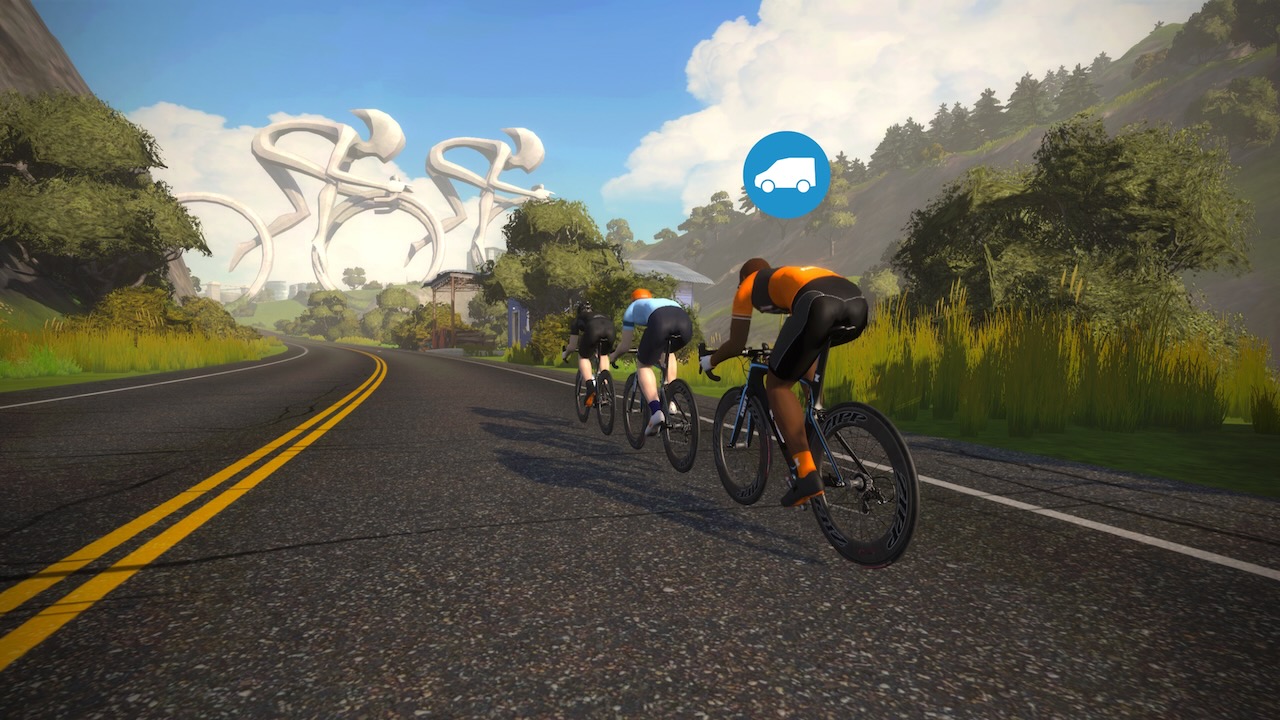 Van PowerUp: This PowerUp will increase the draft effect by 50% for 30 seconds. Look for riders to use this PowerUp at high speeds to gain places and recover. This PowerUp will appear three times during the race at the Sprint Arch at 7.3 km, 29.7 km & 52 km. 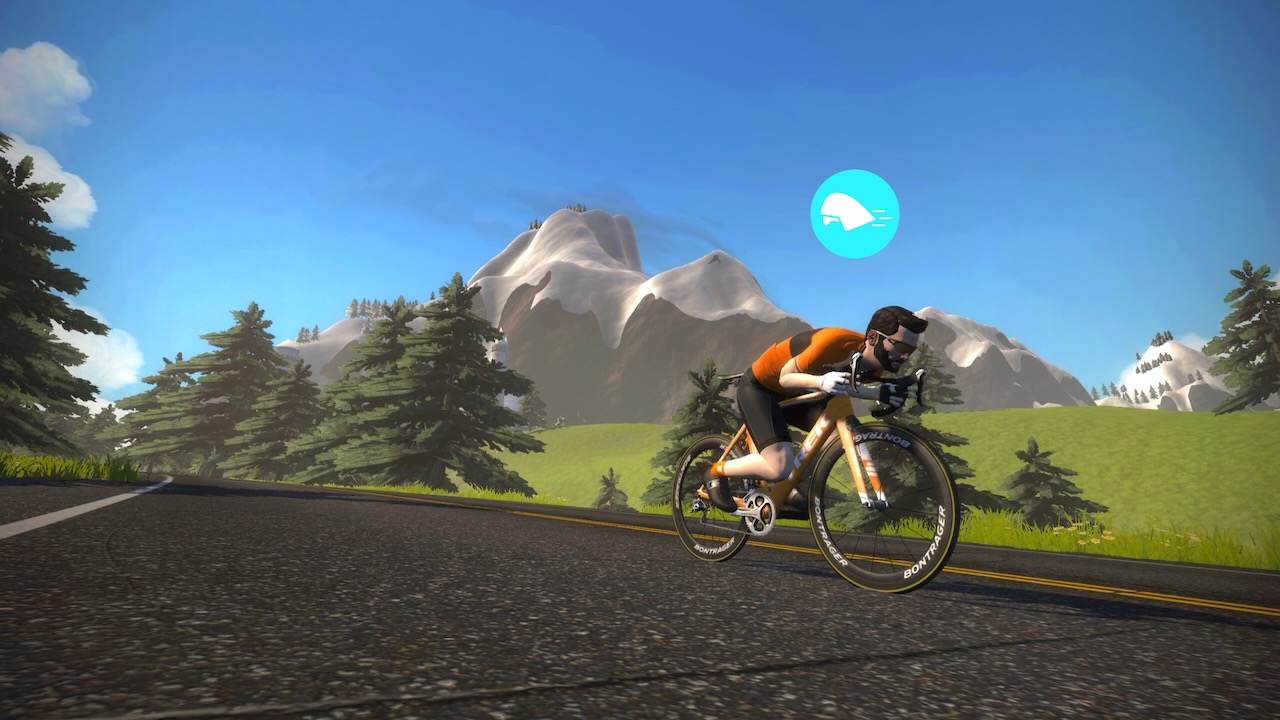 Aero PowerUp: This PowerUp gives you all the aero gains you want, improving the racer’s efficiency and reducing CdA by 25% for 15 seconds. This is another high-speed, high reward usage PowerUp. Look for riders to use this to bridge up to a group or breakaway in the finale. The Aero PowerUp will appear twice during the KOM/QOM Arch at 9.7 km & 32.1 km. 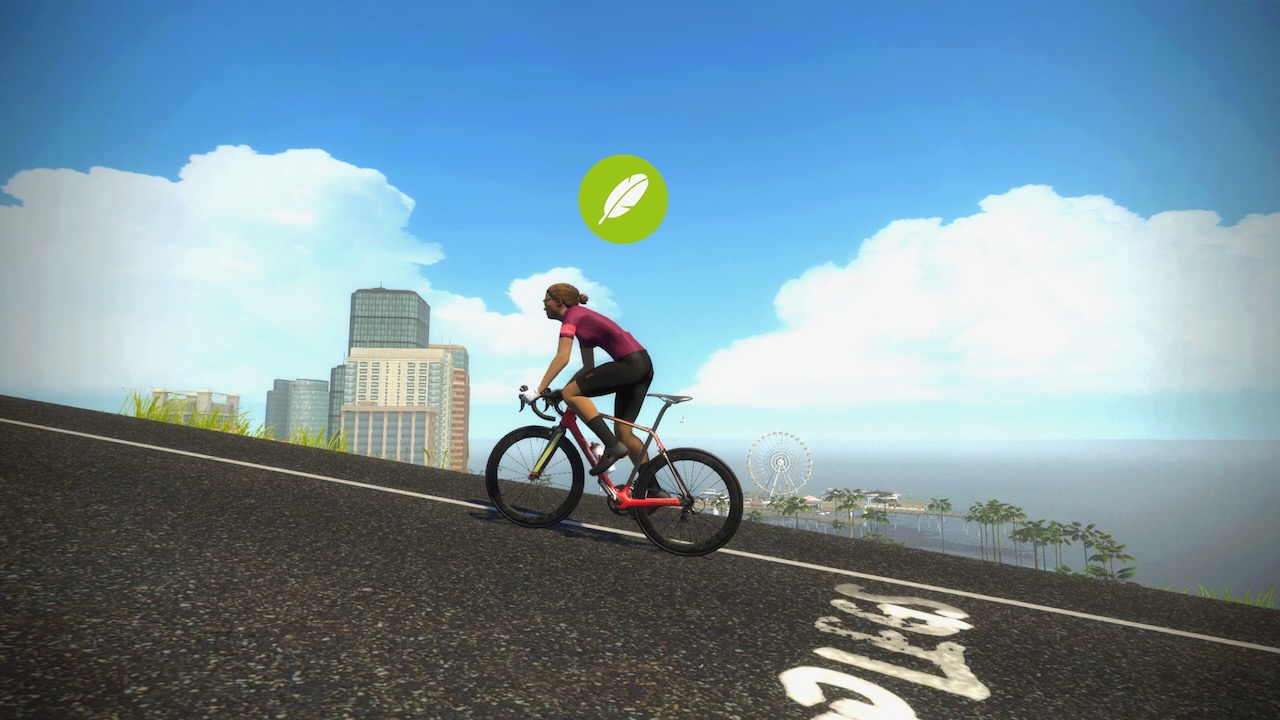 Feather PowerUp: This is a power-up we’d all love to have in real life. The feather PowerUp reduces the rider’s weight by 10% for 15 seconds. Look for racers to use this on super steep hills and a final burst on the hilltop finish. The Feather PowerUp will only be available twice during the race at the Lap Arch at 22.5 km & 44.6 km. 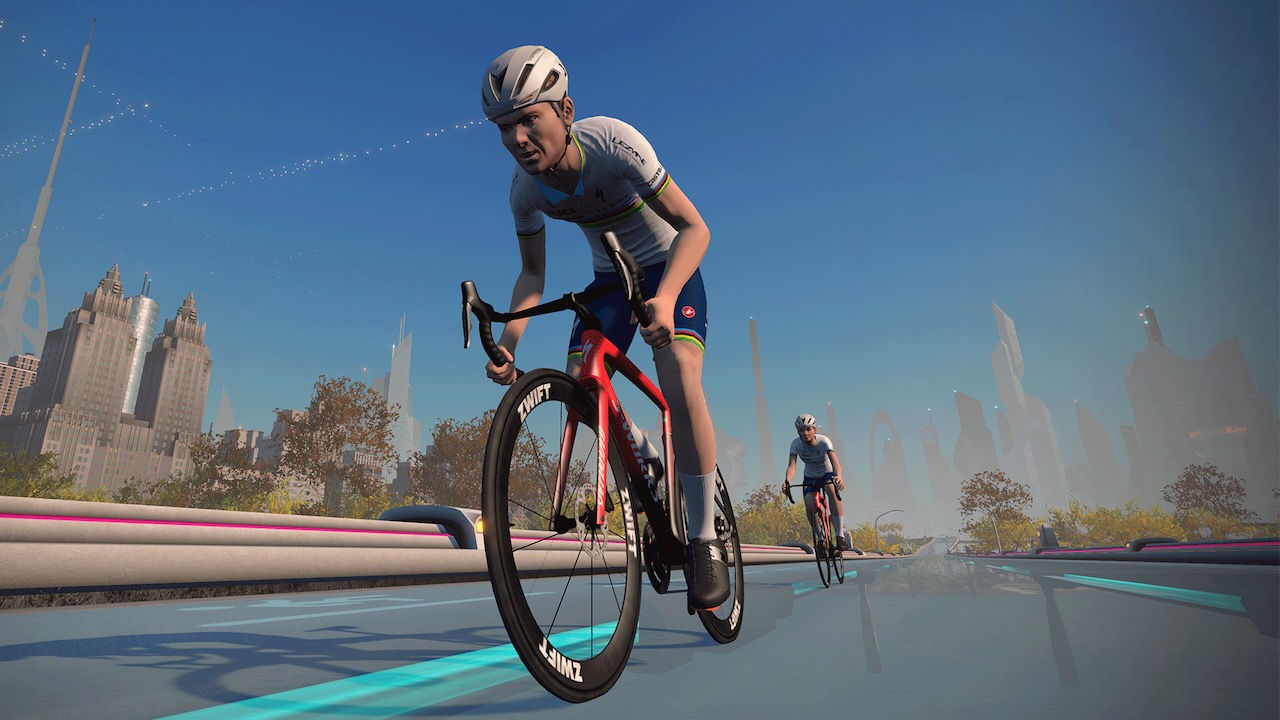 Do you win a virtual jersey or a physical jersey?

This is a common question, and the answer is “yes — both.” The men’s and women’s event winners will receive a UCI Cycling Esports World Champions virtual and physical jersey covered in the coveted rainbow stripes. The winners can officially wear a physical jersey when competing in sanctioned esports races and activities they take part in throughout the following year. Their avatar will also receive a digital version of the UCI Cycling Esports World Champions rainbow jersey, which they can support all year on the Zwift platform. 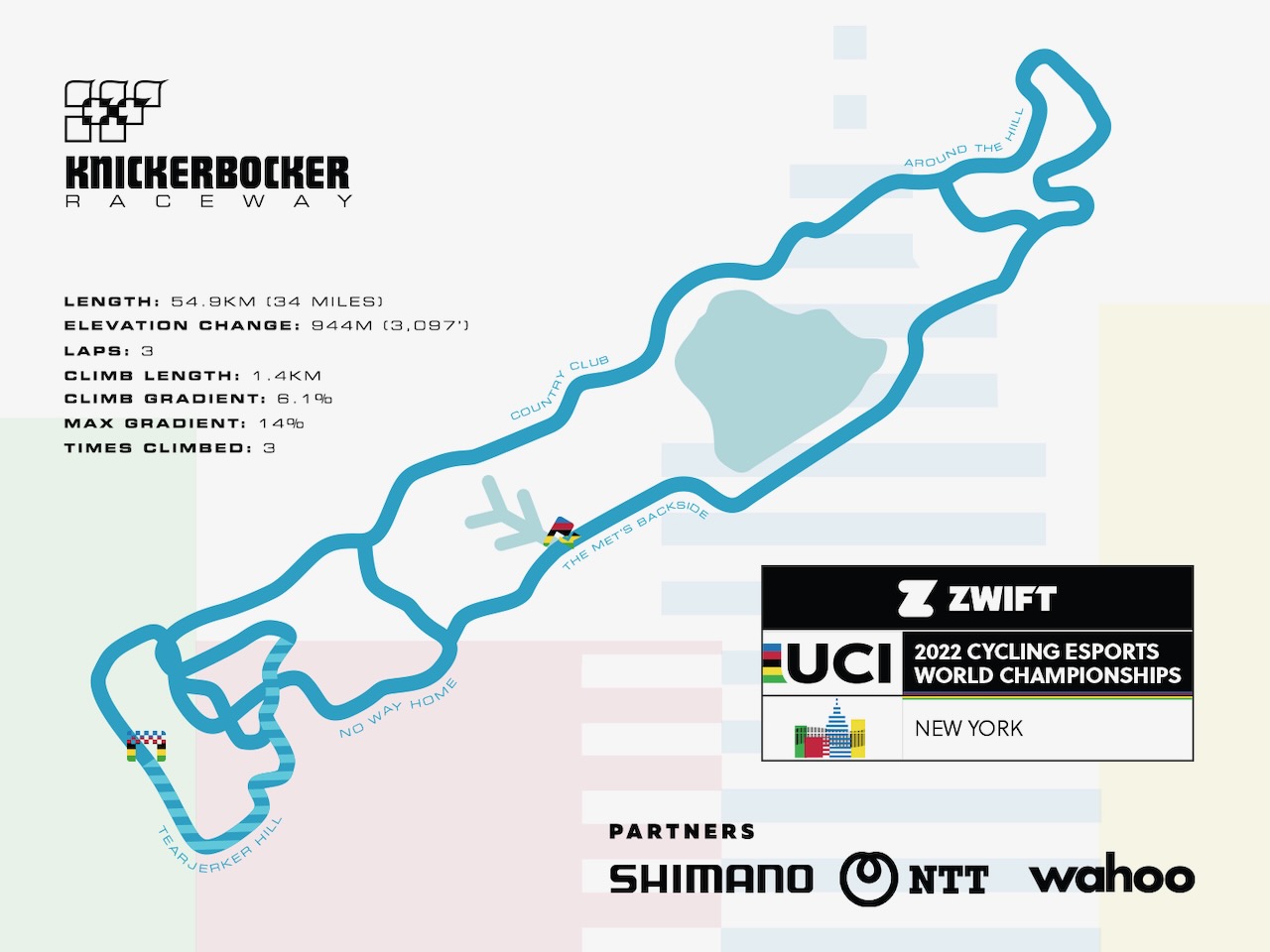 If you participated in the Tour de Zwift — you’ll remember this course. The racers will compete on the versatile Knickerbocker route with a brutal hilltop finish. The route includes rolling hills and some super punchy climbs that will surely cause splits in the field. The men’s and women’s fields will tackle two laps of the 22.5km Knickerbocker route before the 16% grade hilltop finish. 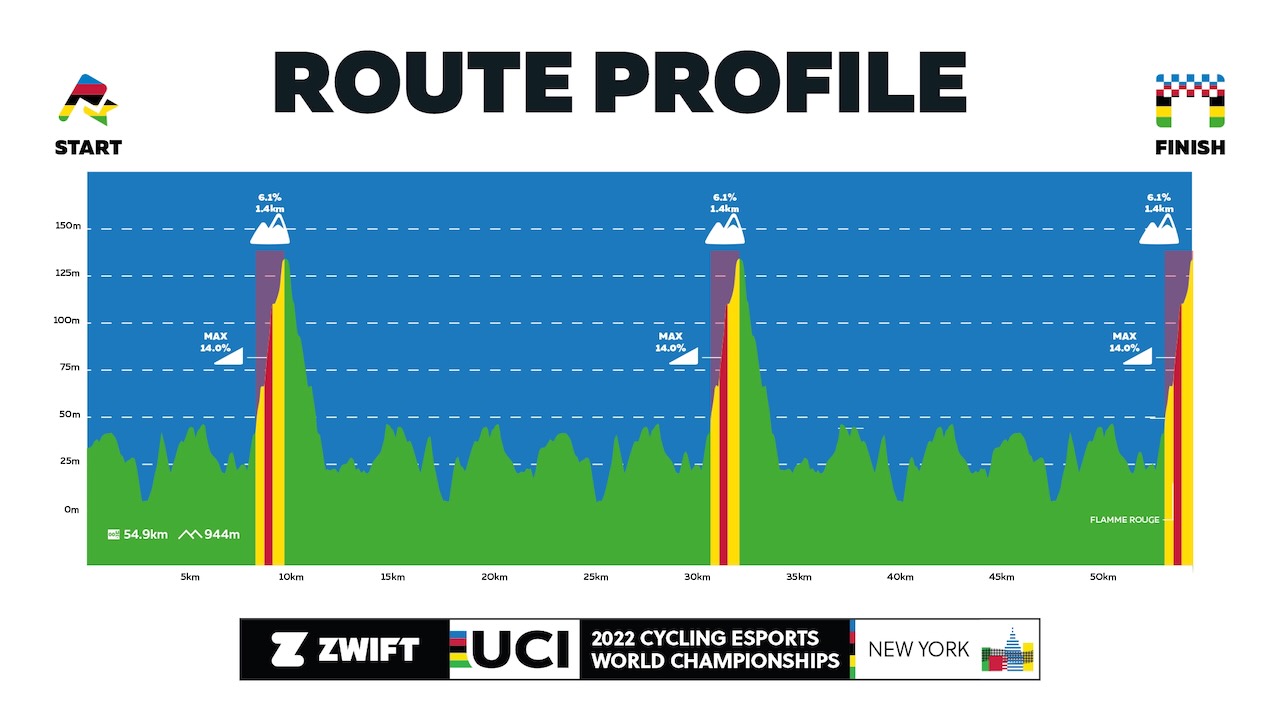 The finale is the New York KOM/QOM, a 1.4km climb. Starting with a slight 6.1% grade and ratchets up to a gear churning 17%. The riders will cover 54.9km in length and 944m of climbing over the 22 UCI Esports Worlds competition. Field size, broadcast exposure, race distance, and prize money will be equal for men’s and women’s races. 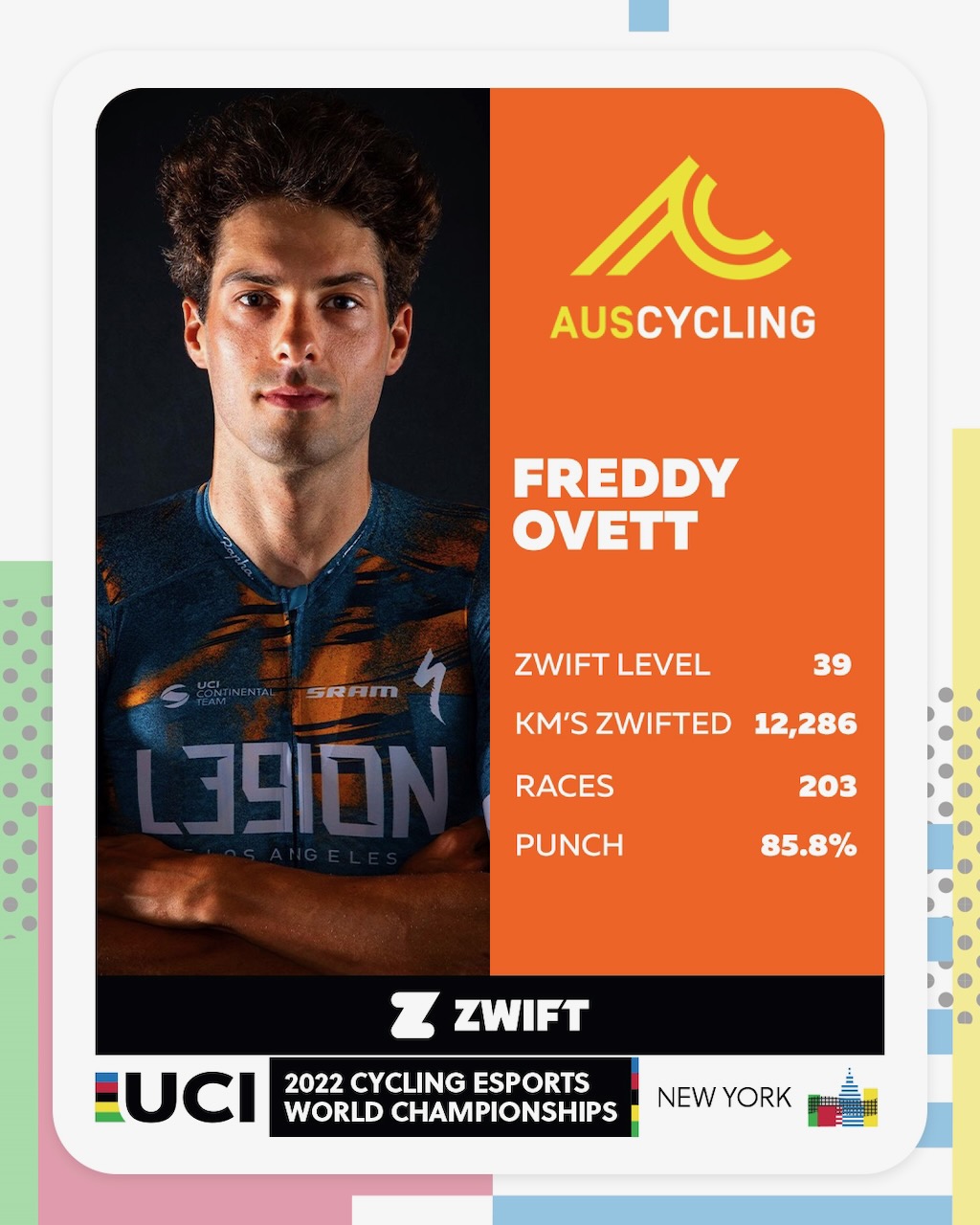 If you’re wondering who to watch out for, some of the names will be familiar, and some will be new. Here are Zwifts ten riders to watch;

Sarah Gigante (Australia) – Runner-up in 2020, Gigante is a consistent Zwift racer and one of the best climbers. Gigante rides professionally on the road with Movistar Team and has an explosive kick that many of her competitors will fear.

Illi Gardner (Great Britain) – One of the most important riders in the Great Britain team, Illi has a huge amount of Zwift racing experience and excels when the climbing starts.

Zoe Langham (Great Britain) – Zoe qualified for the UCI Cycling Esports World Championships in the European Qualifying event. She has impressed this year in the Zwift Racing League Premier Divison.

Ashleigh Moolman-Pasio (South Africa) – The defending UCI World Champion. Ashleigh is one of the best climbers in the world, both on the road and in Zwift. She will want to retain those rainbow stripes!

Jacquie Godbe (USA) – One of the strongest esports specialists in the field, Jacquie is rarely beaten in an uphill race.

Freddy Ovett (Australia) – Freddy shot to Zwift prominence during the Virtual Tour de France in 2020 and has consistently placed high in all the Zwift races he’s participated in since. One of the best sprinters in esports racing, but is also able to get over some of the harder climbs.

Chris McGlinchey (Ireland) – Chris is incredibly experienced as an esports competitor and one of the strongest climbers in the field. The NYC KOM Climb will suit him well.

James Barnes (South Africa) – James is the man in form in 2022. He has been instrumental in helping his team, NeXT Esport, make it to the top of the Zwift Racing League Premier Division.

Takato Ikeda (Japan) – A pure climber and always aggressive. Takato will be riding with a strong Japanese team and will be looking to take advantage of the NYC KOM climb.

Matthias Deroose (Belgium) – Matthias is another strong climber, one of the top-ranked riders on ZwiftPower. He has been a consistent points scorer for his team, BZR, in the Zwift Racing League Premier Division and has a lot of cycling esports experience. 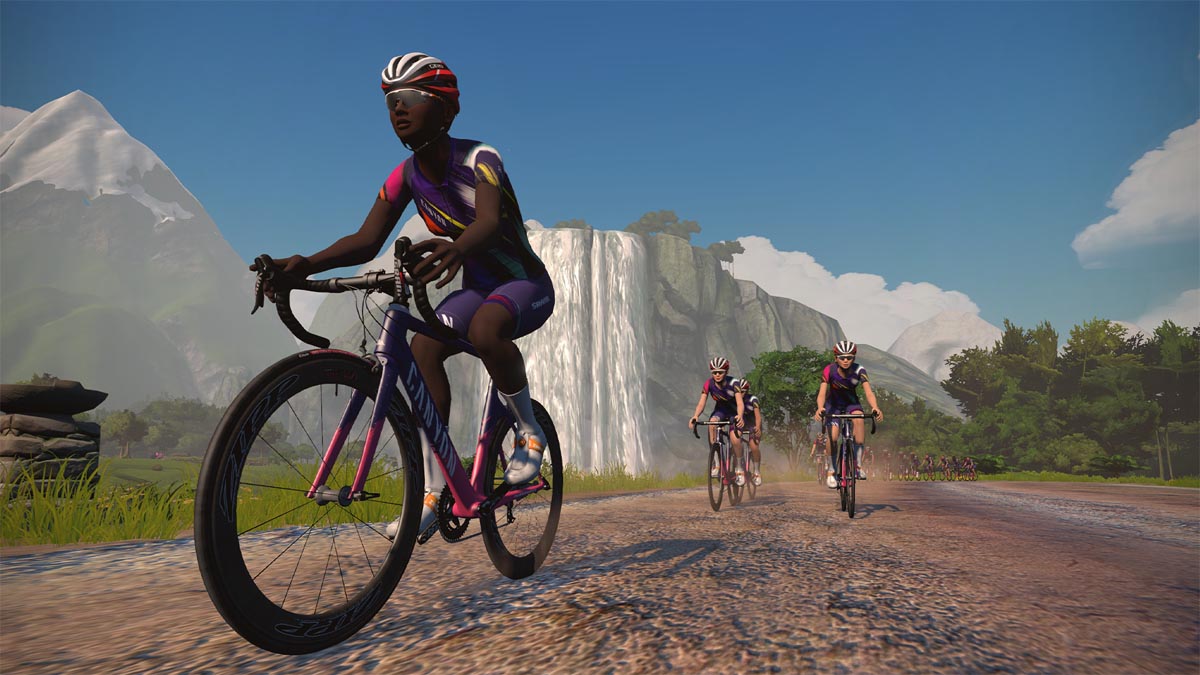 For all information about UCI Cycling Esports World Championship check out www.uci.org

I was a world champion sprinter with my nintendo power pad