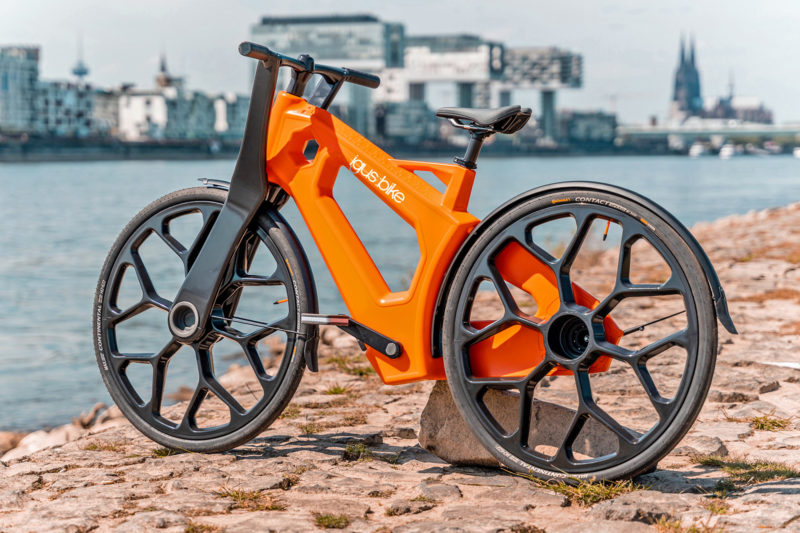 From the first glance at the wild Igus:Bike + MTRL bike concept, it was clear there was a lot of innovation going on in a project with the tagline: “Tomorrow’s mobility from yesterday’s waste.” But it goes deeper than we thought. More than just a bike made out of recycled plastics, Igus sees that concept as a way to make a longer-lasting city bike. Nothing to rust, not even a chain or bearings – since everything is made of plastic.

Dustin Hoffman could have been an innovator in bikes, because plastics really are the future. But now, the Igus Bikes is taking it to the next level.

Igus isn’t a bike maker, but a “motion plastics” company. What that means is they make things like plastic bushings, fully-plastic ball bearings, and plastic gears that make creating a rust-free plastic bike a reality.  The idea came to Igus CEO Frank Blase seeing beach bikes rust away and get scrapped after just a few months while on holiday. So their Igus:Bike concept combines everything they do with a frame, fork, wheels, and other components all made from recycled plastic to showcase the possibility of a bike that won’t deteriorate out in the elements, and will require almost no maintenance.

But it’s not only a concept bike, Igus says they will make the “key components available to all bicycle manufacturers” with a goal of availability of the first bike model by the end of 2022. 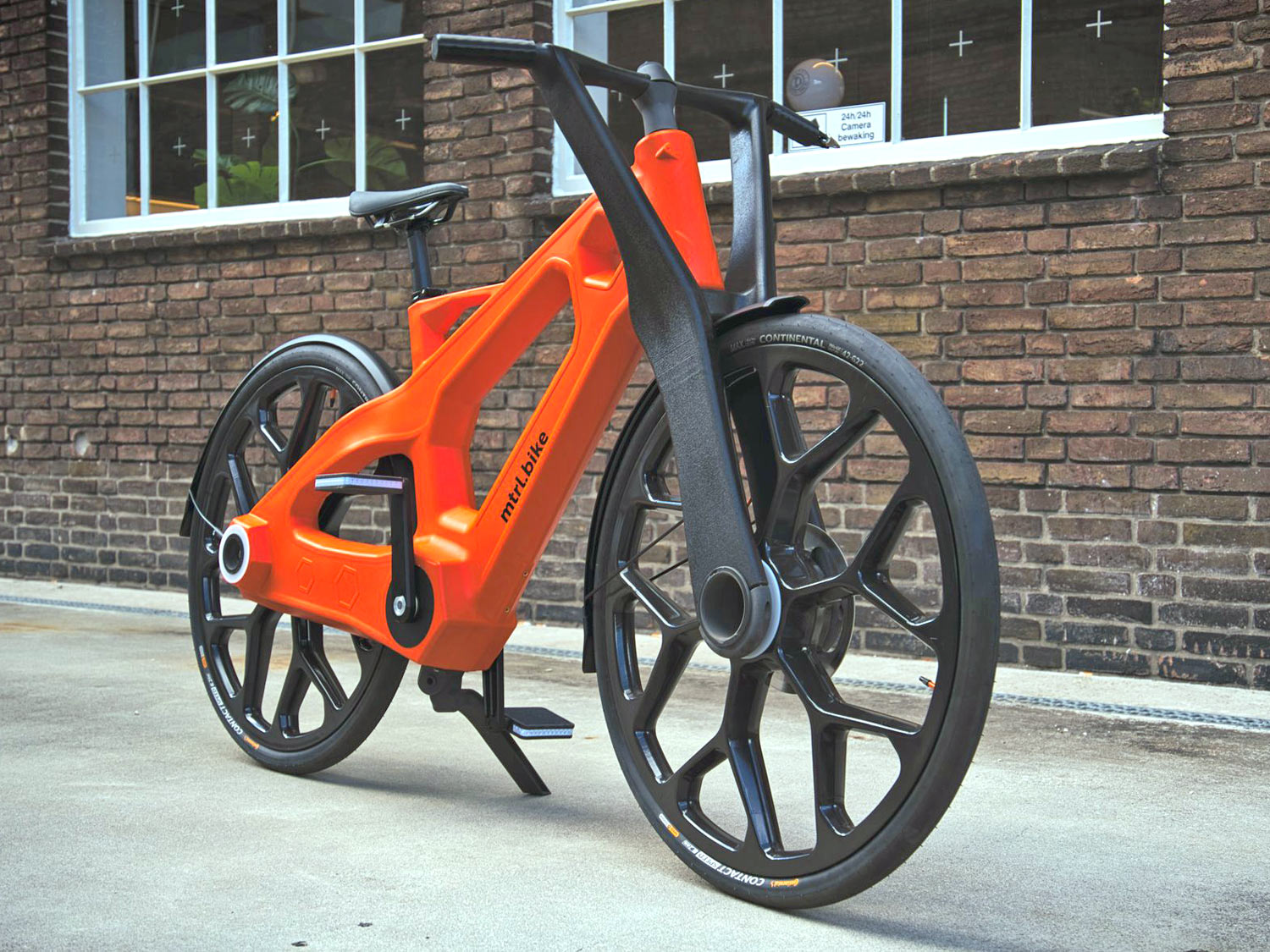 Igus wants to keep plastic out of the landfill or the ocean. So this Igus:Bike concept is made primarily of recycled ‘single use’ plastics. The idea is a “robust, durable urban bike made entirely of plastic, from frame to bearings to toothed belt”. It can be left outside in any weather, and simply cleaned off with a garden hose. No grease, no corrosion, no problems. 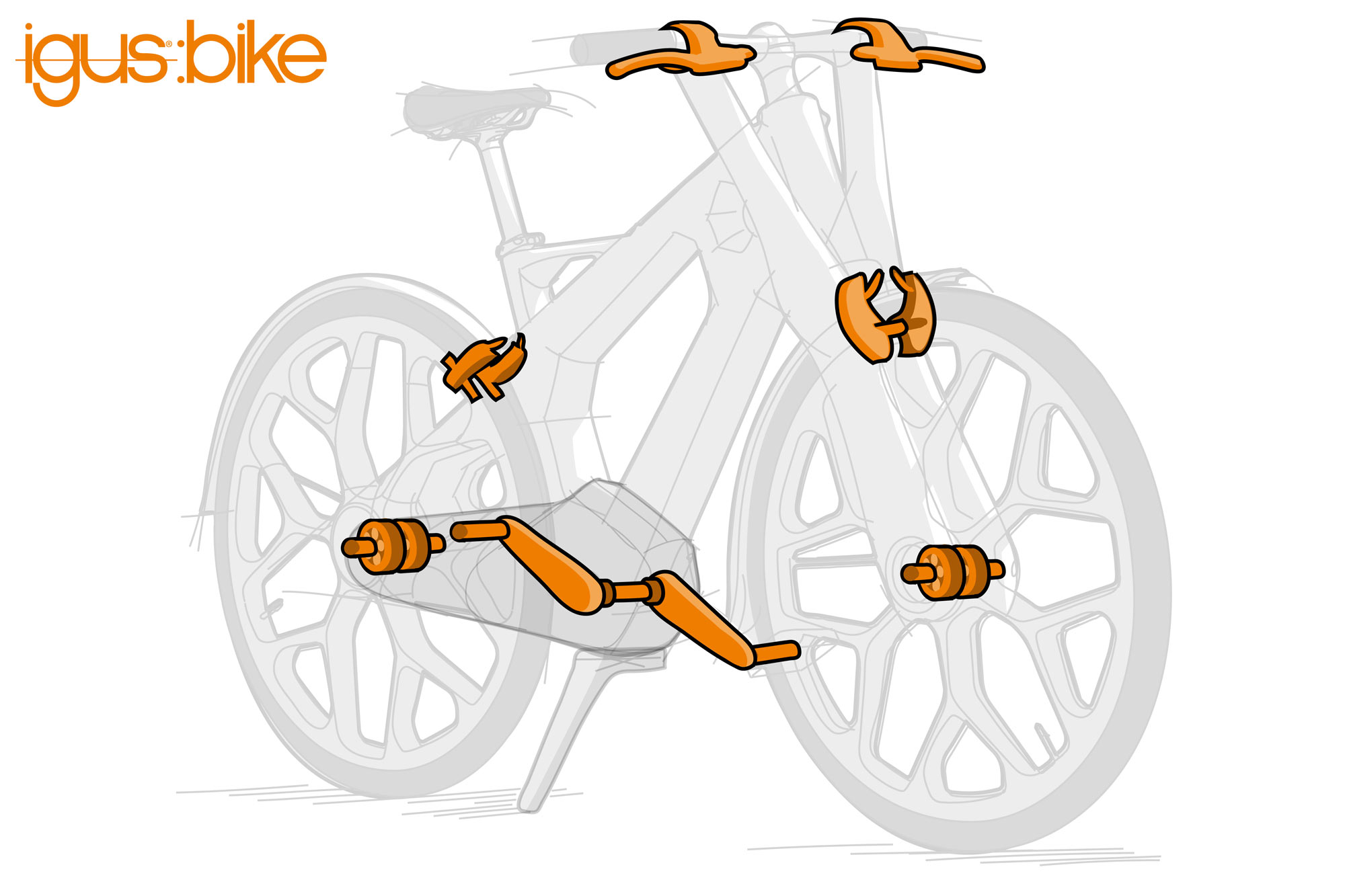 The bike’s wheels use conventional-ish wheel bearings with oversized plastic balls in plastic races. The cranks spin on plastic plain bearings (bushings). Pedals also spin on plastic bushings, but optimized for aluminum pedal axles. The drivetrain is even plastic, combing a plastic toothed pulley, a Gates belt, and an all-plastic freewheel that is said to have a distinct free-wheeling sound.

Everything that spins relies on specially formulated tribo-plastics/composites compositions with permanent dry integrated solid lubrication to ensure low friction. No extra grease or lube required, so also no dirt or debris contamination. It all sounds a bit unbelievable, but Igus & others have been using all of this tech separately in automotive, agricultural & industrial applications for decades. We’ve even seen plastic glide bushings in bikes for a long time, too – think lower-cost pedals and some high-end suspension designs. 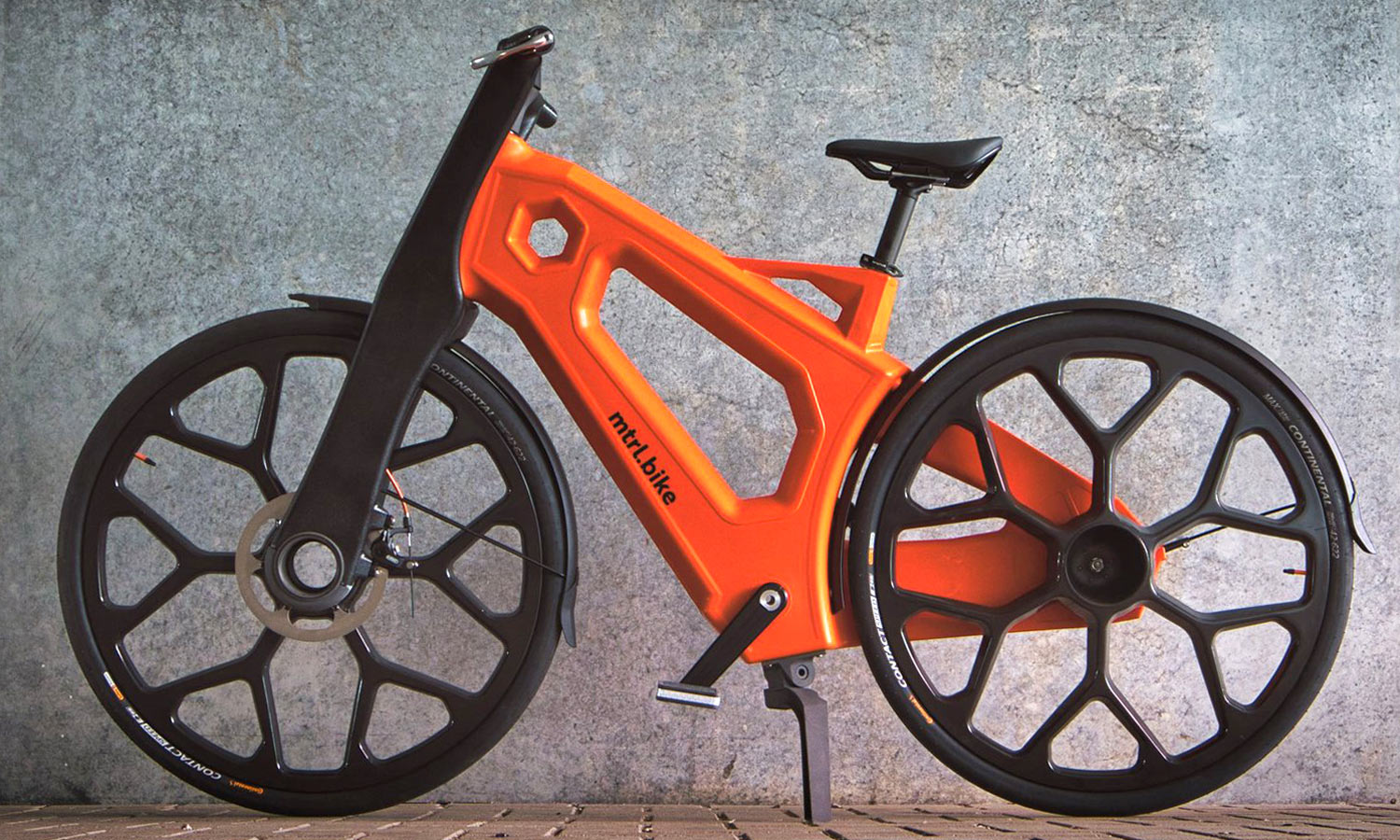 But while Igus is all about the plastic bearings, Dutch upstart MTRL is the first to put them into the full plastic bike. The first of many according to Igus, MTRL is putting plastic bikes on the roads in the Netherlands. Full production of the all-plastic MTRL city commuter bike will begin by the end of 2022 for both an adult and a kids’ version. 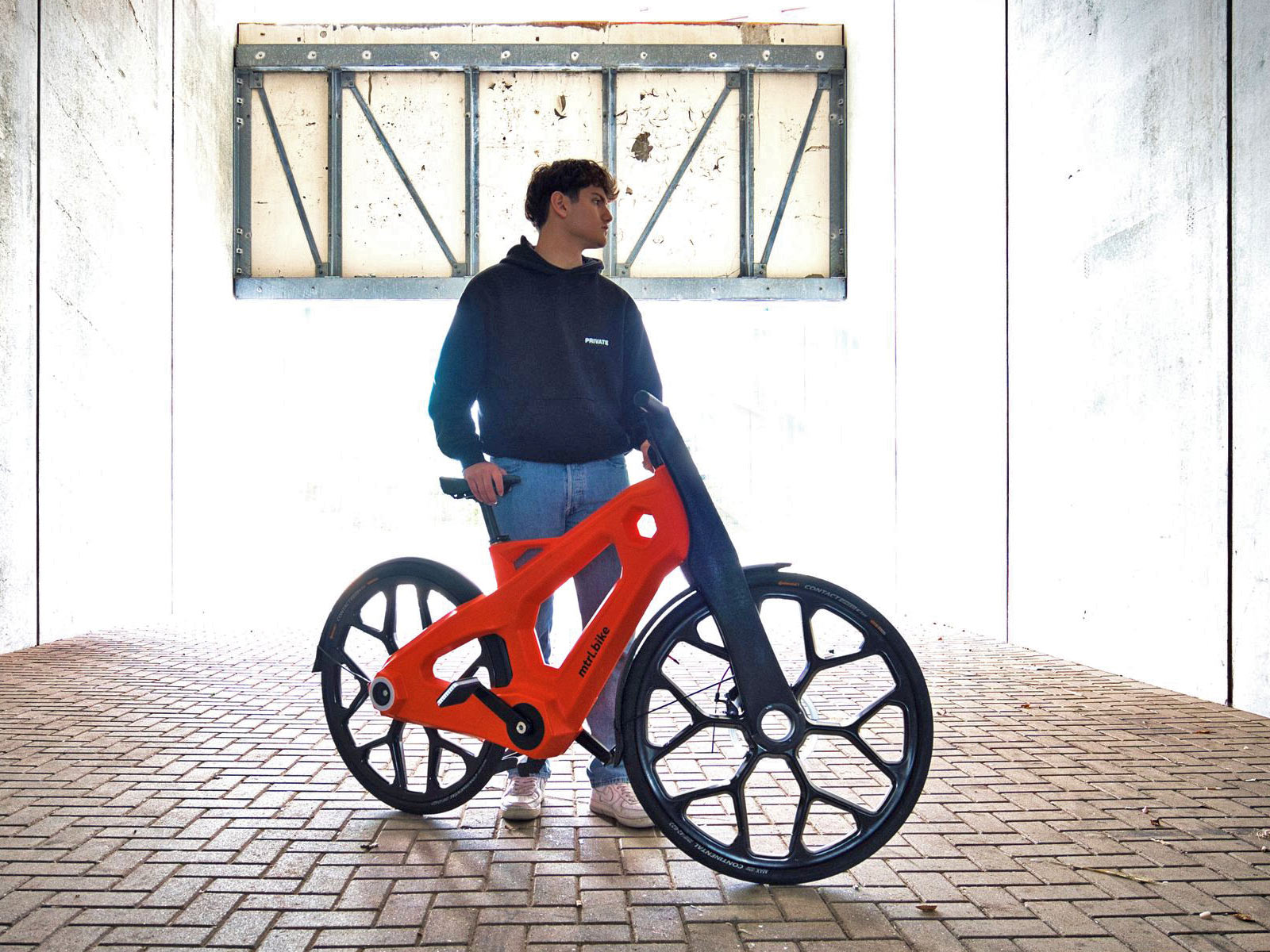 The first prototypes successfully produced and tested were made by recycling old fishing nets. Complete adult bikes will be offered from 1200€ using virgin plastic, or 1400€ produced from recycled material. Pre-order now straight from MTRL (for customers in The Netherlands & Germany only, now). They also have the idea to set up manufacturing facilities near plastic landfills around the world to go straight to the source of the raw material. 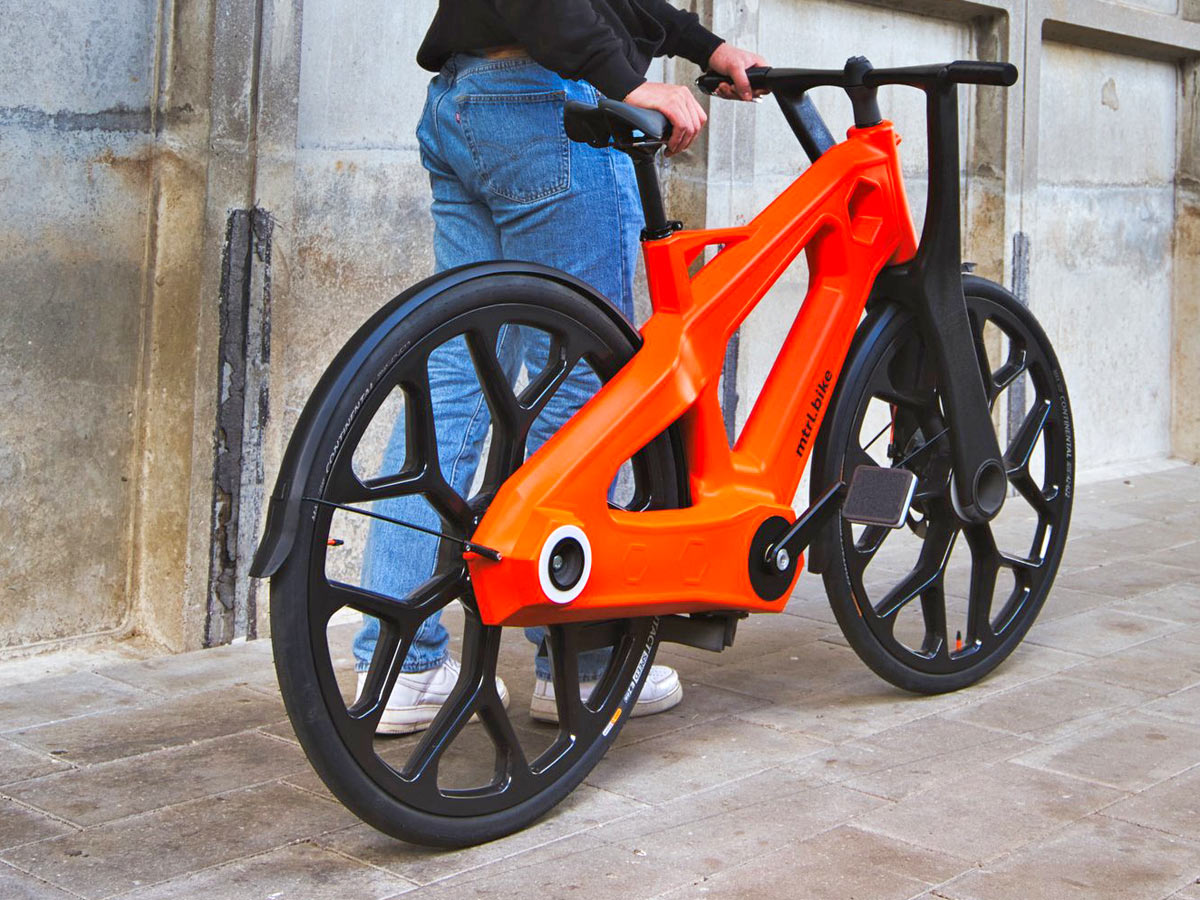 Ibus is also working on integrating material condition monitoring using Igus smart plastics, so users can use a smartphone to see how many more thousands of kilometers the bike will handle as an effort to overcome cyclists’ skepticism of the capabilities of an all-plastic bike.

But remember: No Corrosion, No Maintenance, and No Lubrication required. That should be enough to be willing to try it out.

Hmmm, I rode a plastic 3 wheeler in the 60’s, it was fun, going down hill, but was not comfortable. I am really questioning the drive train being plastic and longevity.

Reduce >> re-use >>> re-cycle, in that order. Making products from post-consumer recycled plastics is cynical green-washing exploiting virtue-signalling.
Bikes rusting out happens from a lack of basic care and maintenance, it is not an inherent problem of the materials used. If we’re to really take seriously the idea of an indestructible plastic beach bike, there would have to be some serious level of sealing protecting those oversize plastic bearings from sand and salt ingress.

I’m confused:
Is this downcycling or upcycling?

Except, as it does wear out the tiny plastic particles will still end up in the ocean or accumulating in tissues one way or another. This doesn’t solve the issue with plastics, it just puts it off for a while.

Are they using titanium brake rotors so they don’t corrode?

The other commenters are right. This is a bad take on a terrible concept. Especially if they’re not using specialty materials but consumer grade plastics like the article implies. The strength and stiffness are so low they’re probably going to be 50-60lbs.

And there’s going to be a ton more friction from the bushings and plastic bearings so they’re also going to suck to ride.