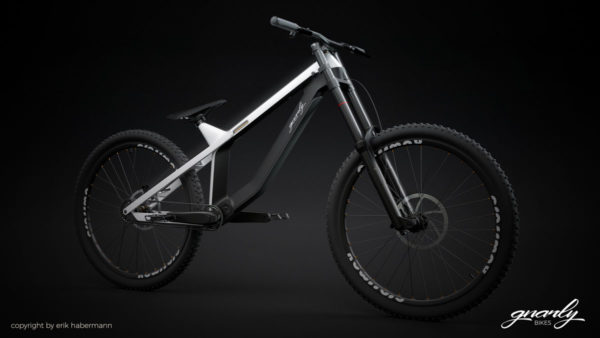 Sometimes a bike just calls out to you. That was the case when I saw this DH bike from Gnarly Bikes on Facebook. Only, it’s not an actual bike – it’s just a concept. But other than a stunning rendering of a concept bike, the Gnarly Bikes DH concept could hint towards the future of mountain bike tech and integration. 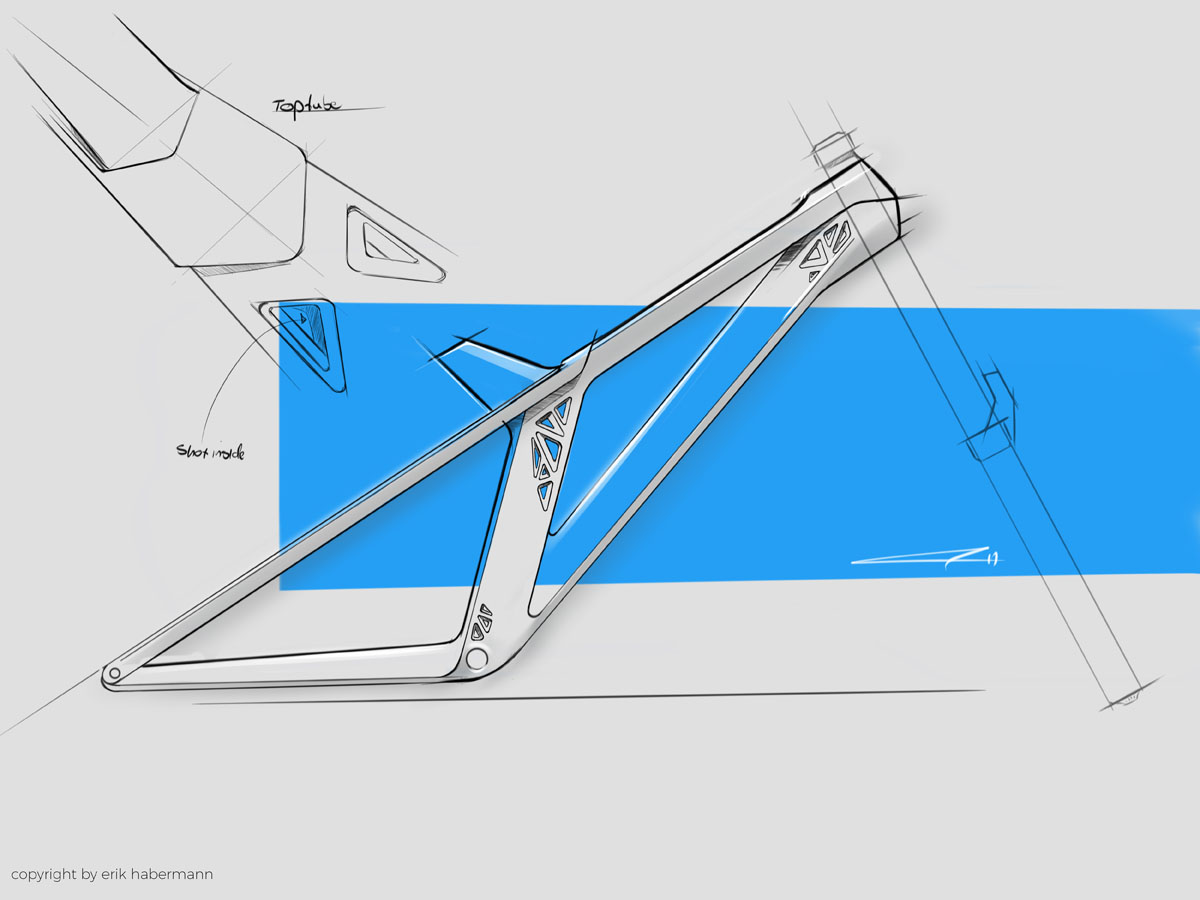 Erik Habermann, the Berlin based product designer responsible for the designs, is no stranger to the bicycle industry. After studying product design in Potsdam, he went on to work for Volkswagen as a surface modeler. From there, Erik landed a job at Canyon Bikes as part of their design team and worked on the current Canyon Torque. However, as things sometimes go, Erik left Canyon to return home to Berlin and is currently working in a design office. Like most of us though, his passion for bicycles is still strong and Erik continues to ride and model in his free time and creates concept bikes under the fictional brand, Gnarly Bikes.

Erik mentions that each bike is designed with a specific focus, stating, “before a design process, I often ask myself, what would I change, what annoys me about current bicycles,
what can I do better and who is the person who wants it. The first concept develops around these questions, first in the head, then on paper, and later I redesign it digitally. This is how the downhill bike by Gnarly bikes came to be.” 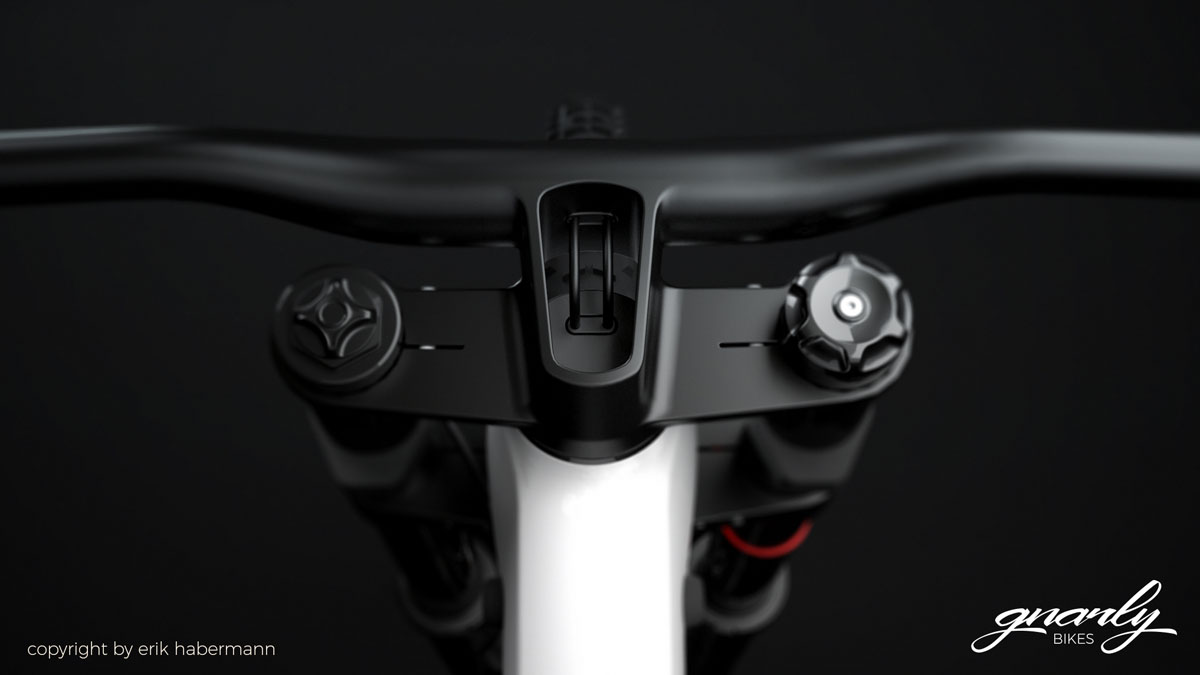 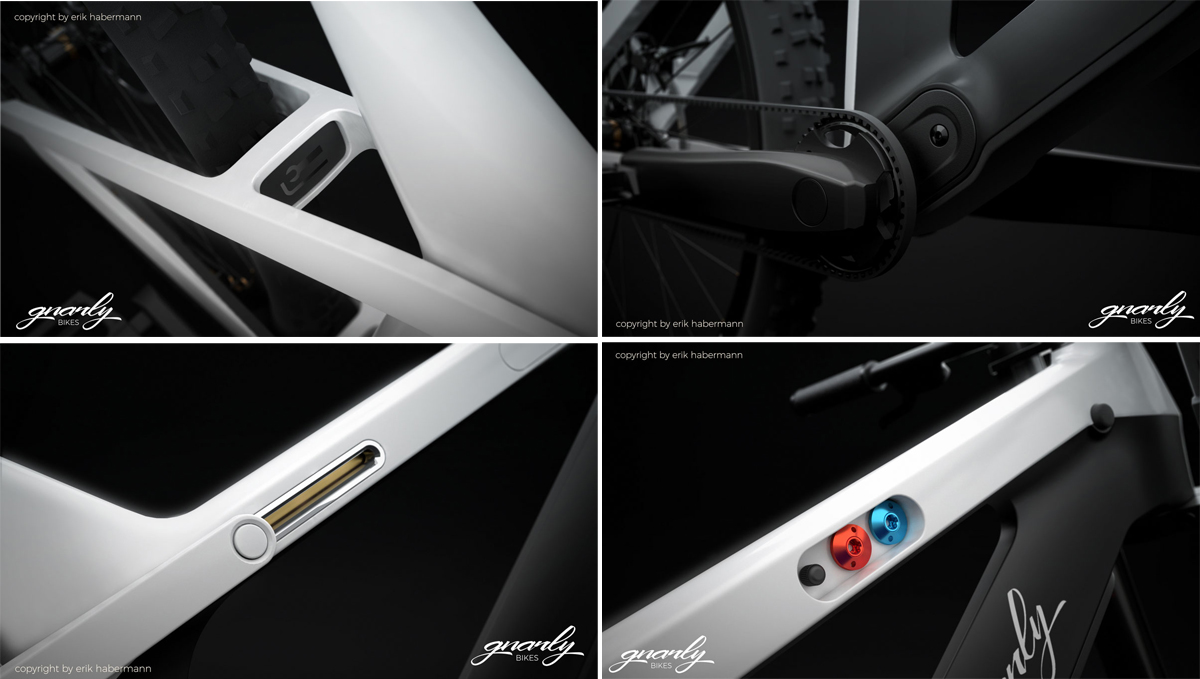 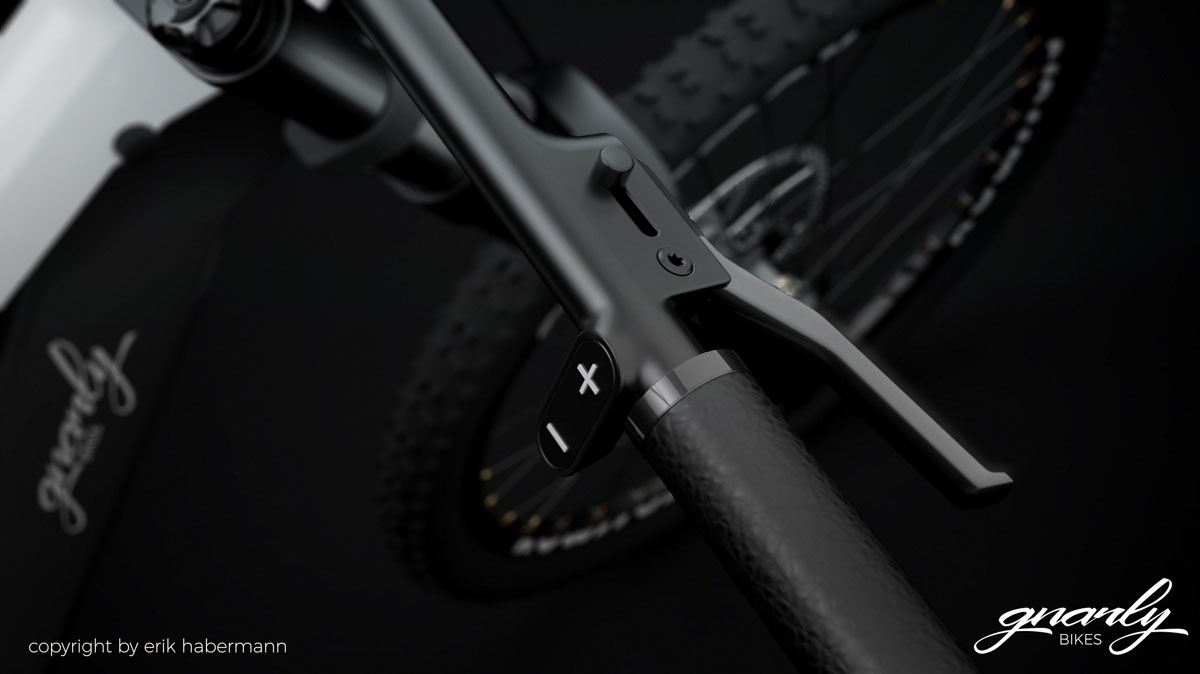 And that bike is all about integration. Taking things a step further than what’s currently possible, Erik mentions that he does try to create designs that aren’t too far fetched. He wants to push the limits of bicycle design in terms of integration that is aesthetically pleasing but also be functional.

As a result, one of the most noticeable features of this bike is the lack of a shock – or lack of a visible shock. In this case, the shock would be hidden in the top tube with a sliding rear shock mount and an air fitting and rebound and compression knobs accessible from the side. This isn’t the first bike to hide a shock inside the frame, and Erik acknowledges the Resistance Bikes Insolent which uses a modified Fox 40 stanchion as a shock that’s partially hidden in the top tube. But to Erik, he wanted to design something with a “a little bit more of a designer’s view.”

Once you understand what’s going on with the shock, you start to notice the other little details. Brake hoses are perfectly routed through the stem and into the frame. The belt driven gear box is electronically controlled with a tidy little button molded into the bar which also is molded into the brake levers. There’s even a little storage area on the rear swingarm for tools. 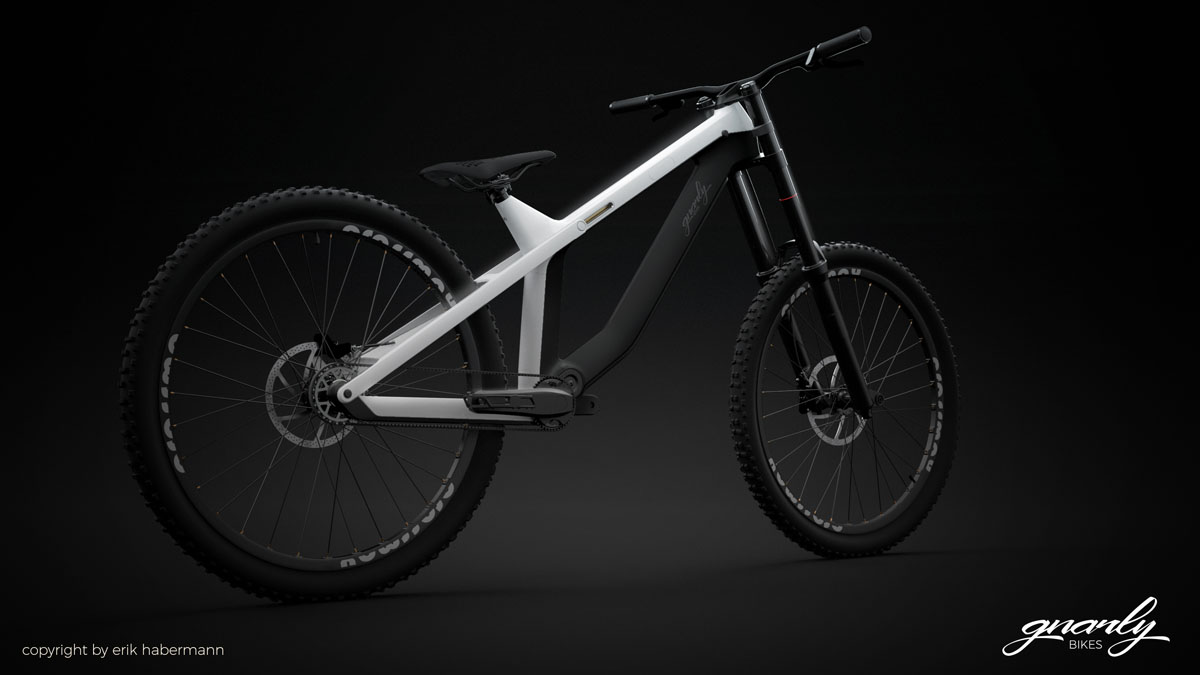 Obviously, with a conceptual design, the sky is the limit. But Erik’s designs may not be that far from reality. After all, today’s wonder bikes started off as similar computer aided designs years ago as part of the same design process. 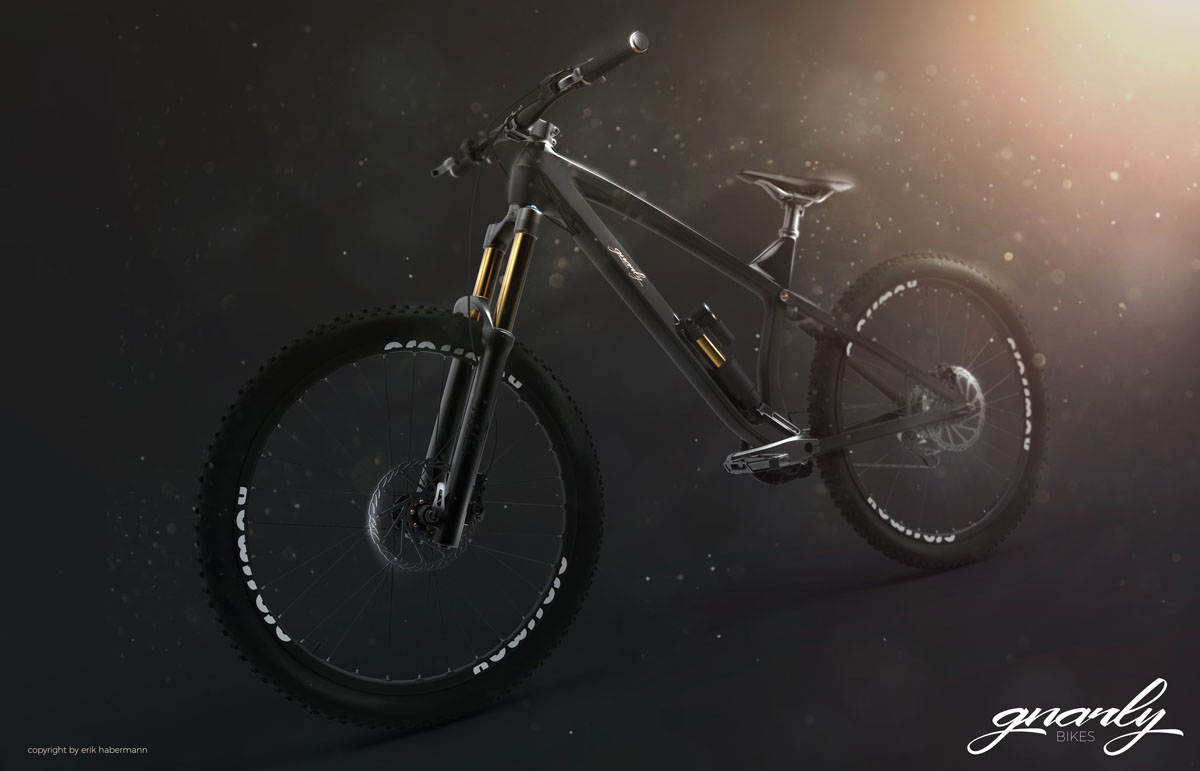 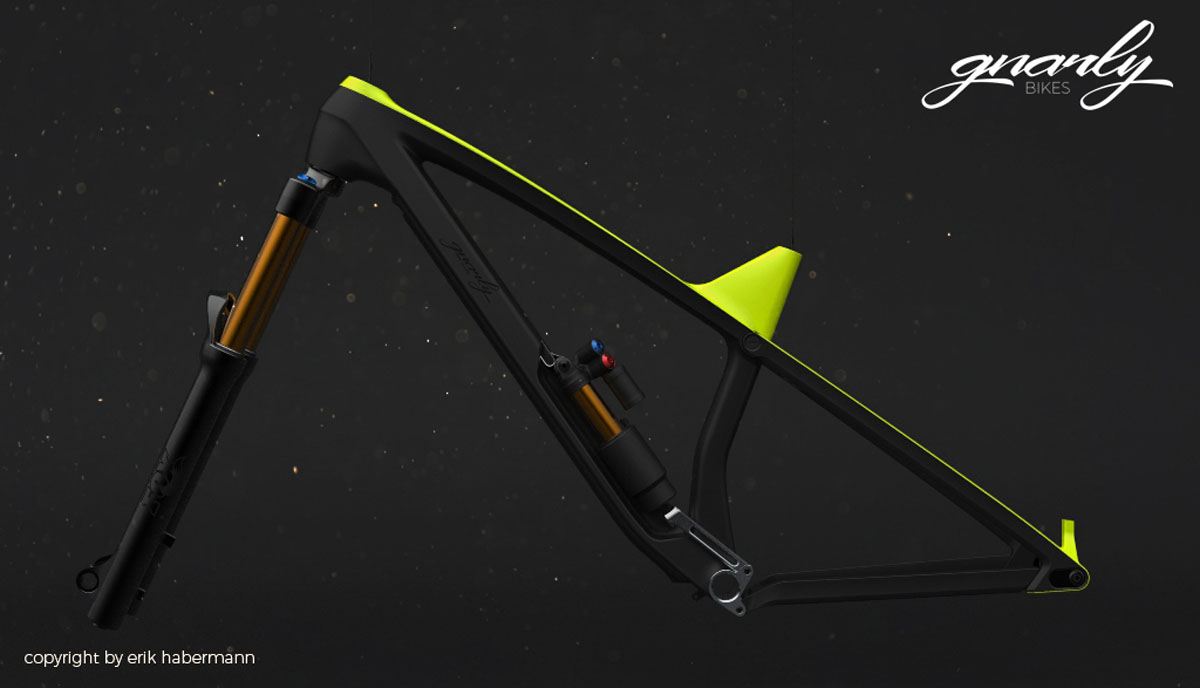 In addition to the DH bike, Erik has a few other designs that he’s been working on like this freeride bike with a low slung suspension design. 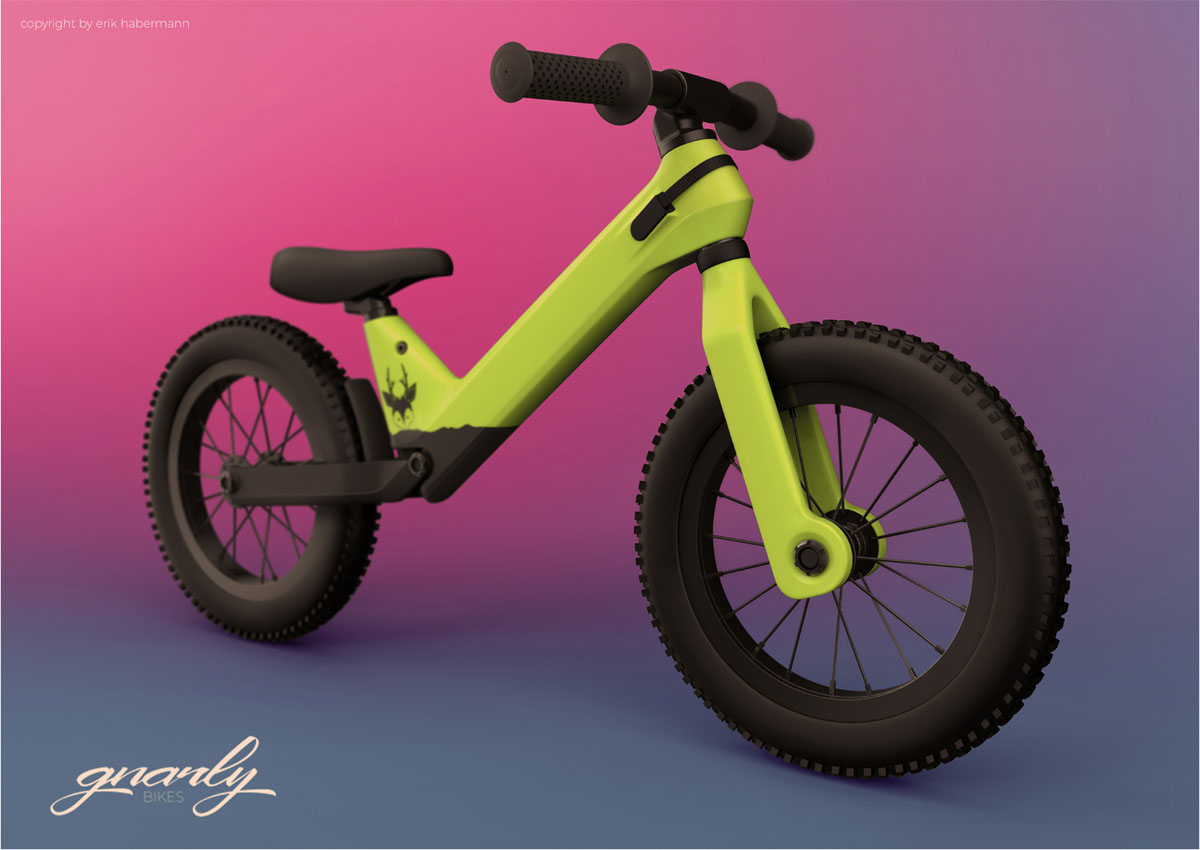 And this playful, low-cost take on a balance bike for kids… 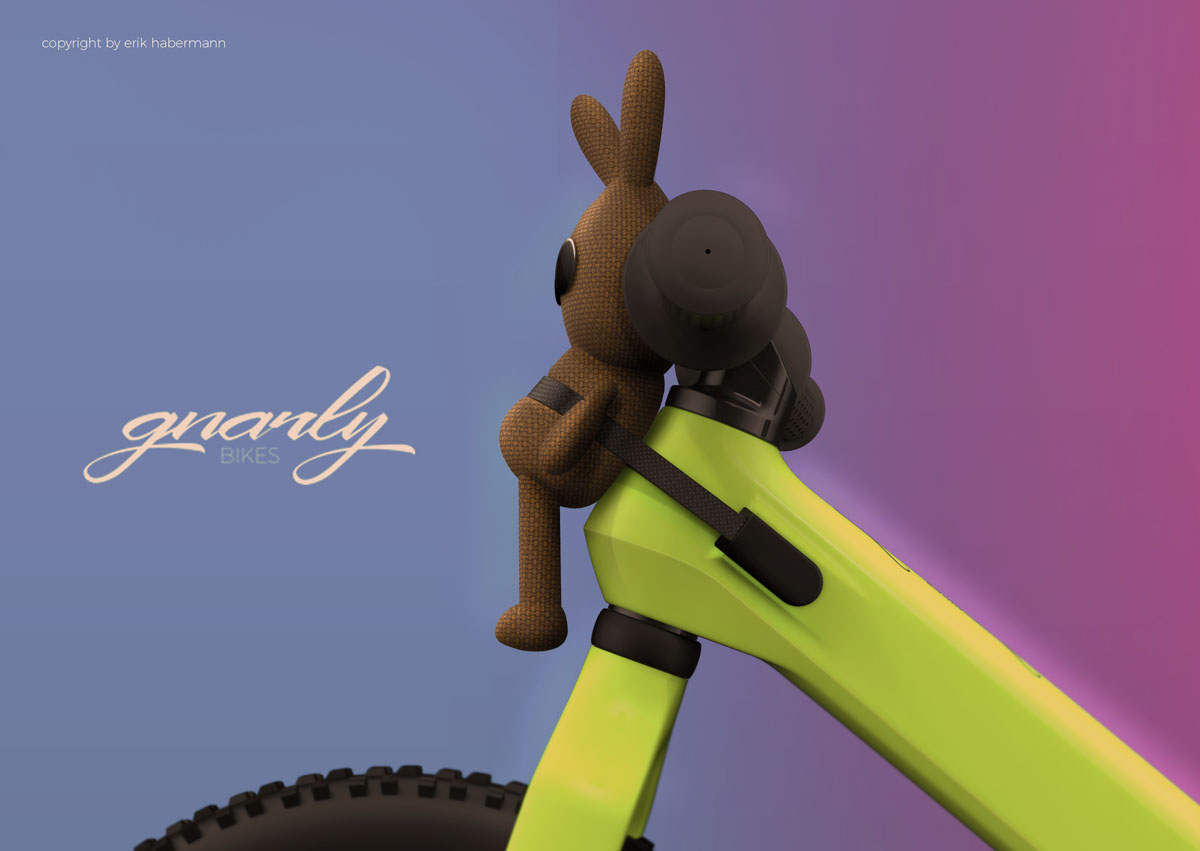 …complete with a crucial mounting strap for your favorite stuffed animal. 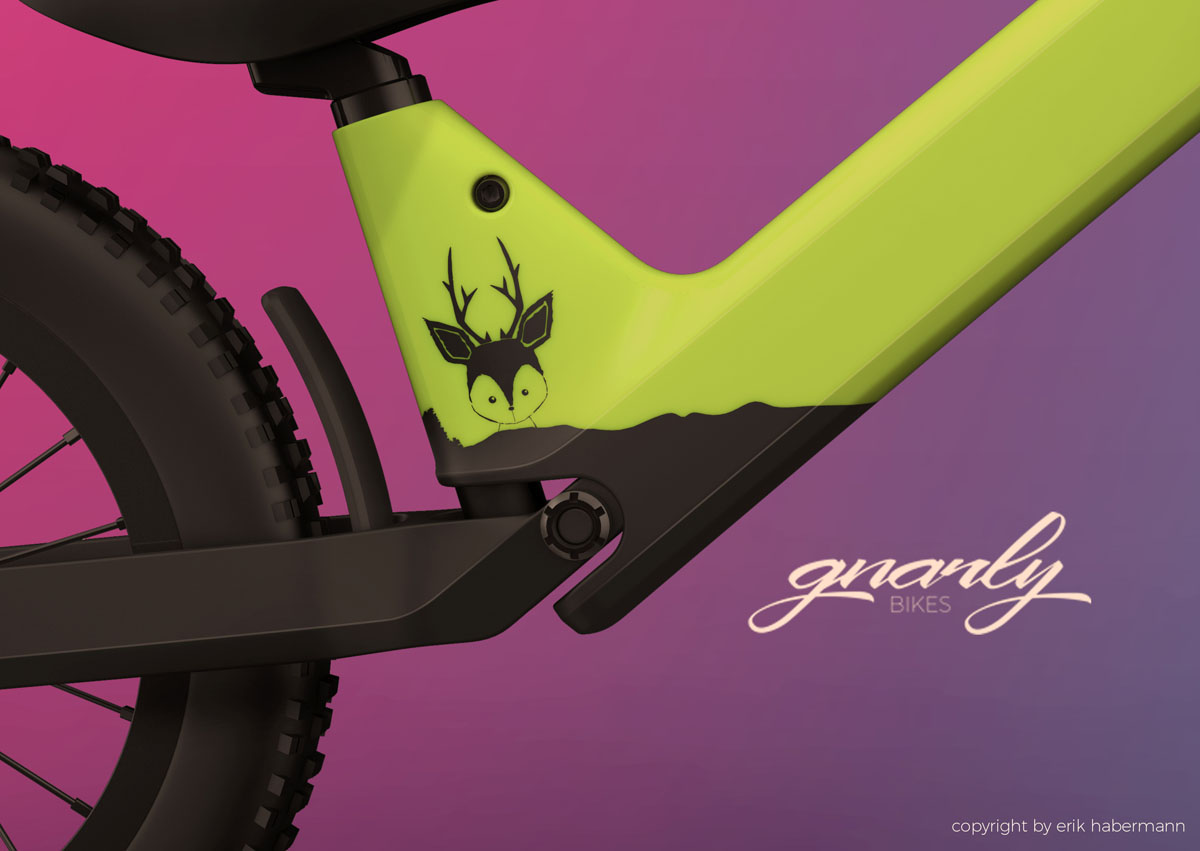 Plus an integrated mini fender. It hides a bit of cush up front in an elastomer at the lower headset cup, and a bit of single pivot elastomer rear suspension too.

Hopefully not a future for everybody. For me it is enough of a nightmare that internal cable routing became so popular :/.

it goes in one end and comes out the other if that’s a nightmare, your doomed freddy is coming to get ya

Internal cable routing has been a mainstream thing for nearly a decade, how freaking old are you? Maybe we should just go back to the penny farthing, everything was way better then right?

Internal routing is not that big of a deal nowadays. All the current frames are sleeved 100% of the way so cables and housing just slide right through. Its not a klein quantum internal routing style anymore. And its been around since klein has been pushing it since the late80s/early90s.

This is some seriously impressive work. The renderings are top-notch, that’s for sure.

Pretty nice! Reminds me of the Insolent prototype by Resistance Bikes

Interesting design study, but not something that should ever be anything but vaporware. “Integration” is a term in the bike industry that sounds good on paper but generally leads to terrible bikes. Exceptions are largely limited to shifters and headsets.

This kind of integration might be desirable in a world of zero maintenance, but until then, I prefer simplicity (in ownership experience) and affordability.

Well, impressive as a design study, but realistically, not too practical for a real-life bike… Too hard to maintain many of the components, and the ‘all-in-one’ handlebar/stem is too limiting for sizing/adustment. Even the Scott/Syncros one-piece bar and stem has flaws – you cannot rotate the bar to preference, and if you want a centimeter longer or shorter, it requires an expensive assembly to make that happen. Molded bar/stems are nice, pretty and light until you actually try to make a bike FIT somebody… Same with the
‘hidden’ parts and assemblies – really cool, until you try to work on it, or even worse, have to take it in to be worked on – the service rate at least doubles as the time required to work on it has at least doubled…

These are amazing! I’d love to build a bike for customers like this if it were possible. Yes integration makes bikes more difficult to work on but that’s what makes wrenching so fun. “Blah blah internal routing is sooooo difficult. These bikes will be too expensive…” It’s not hard at all with the proper tools and know how.

The susp geometry clearly doesn’t work, but these concepts are fun for getting ideas flowing. They do look nice.

integration usually leads to the use of proprietary parts, less options and high costs for repair and replacement.

Integration works well in automotive segments where this designer is clearly from. Cars need a tiny amount of regular maintenance of components as weight is less critical. Bikes on the other hand especially DH bikes need more maintenance and fiddling and that’s where hyper integration fails you either get poor compliance and in turn bikes that brake or work poorly, or exorbitant costs transferred to the owner in both personal time along with high priced tools and labor costs

Possible from an aesthetic standpoint and that’s about it. The full integration in this design style really limits possibilities for suspension kinematics.

Cool designs, but it won’t happen in the DH application.

It is good to see some other dreamers are out there. Keep it up! The kids bike stuffed animal strap is the best idea ever!

Ideal cinematics like the Norco Bomber 1998. Questions about the rigidity/weight at the linear bering (the linear Yeti DH was quite heavy). For me the best integrated and light bike to be found at Bold Bikes Switzerland.

I see lots of Star Wars similarities in these bikes. Overall very clean lines. I am a bit skeptical as to how much trail abuse they could take.

On the positive side he shows a good understanding of bike tech unlike those concepts with hubless wheels or bare cable instead of a brake lever. Also they are attractive in angular F117 Stealth Fighter way. ON the minus side that hidden shock looks like a nightmare to service and I have some similar concerns about brake hoses. Electric shifting actually helps since wires don’t need tension adjustment and can be kept sealed.
I’m unlikely to ever buy one but they would probably sell if the price is good.

Hate to be negative but cute pictures is all we see, that’s it. So far from reality and yet not advanced enough to show anything new.

Posting concepts are an exercise in not much. I rarely see elements in any concepts get used.