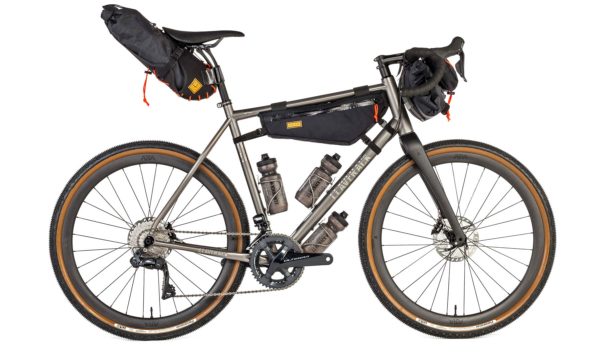 The secret of course to the reasonable (for titanium) pricing is that, like all other J.Laverack bikes, the Grit frame is designed in the UK and manufactured in Asia. Founded around four years ago in the East Midlands, J.Laverack built a brand on well designed titanium bikes with features many of us have come to appreciate in recent years – reasonable light weight, big tire clearance, quick & comfortable geometry, real world usability with details like full coverage fenders & dynamo lights, and of course the comfort & durability of ti. While their all-road J.ack frame offered up 35-38mm tire clearance and road-inspired geometry, brand founder Oliver Laverack still wanted to create a bike to venture further off-road for more unlimited gravel adventure riding. Enter the new GRiT… 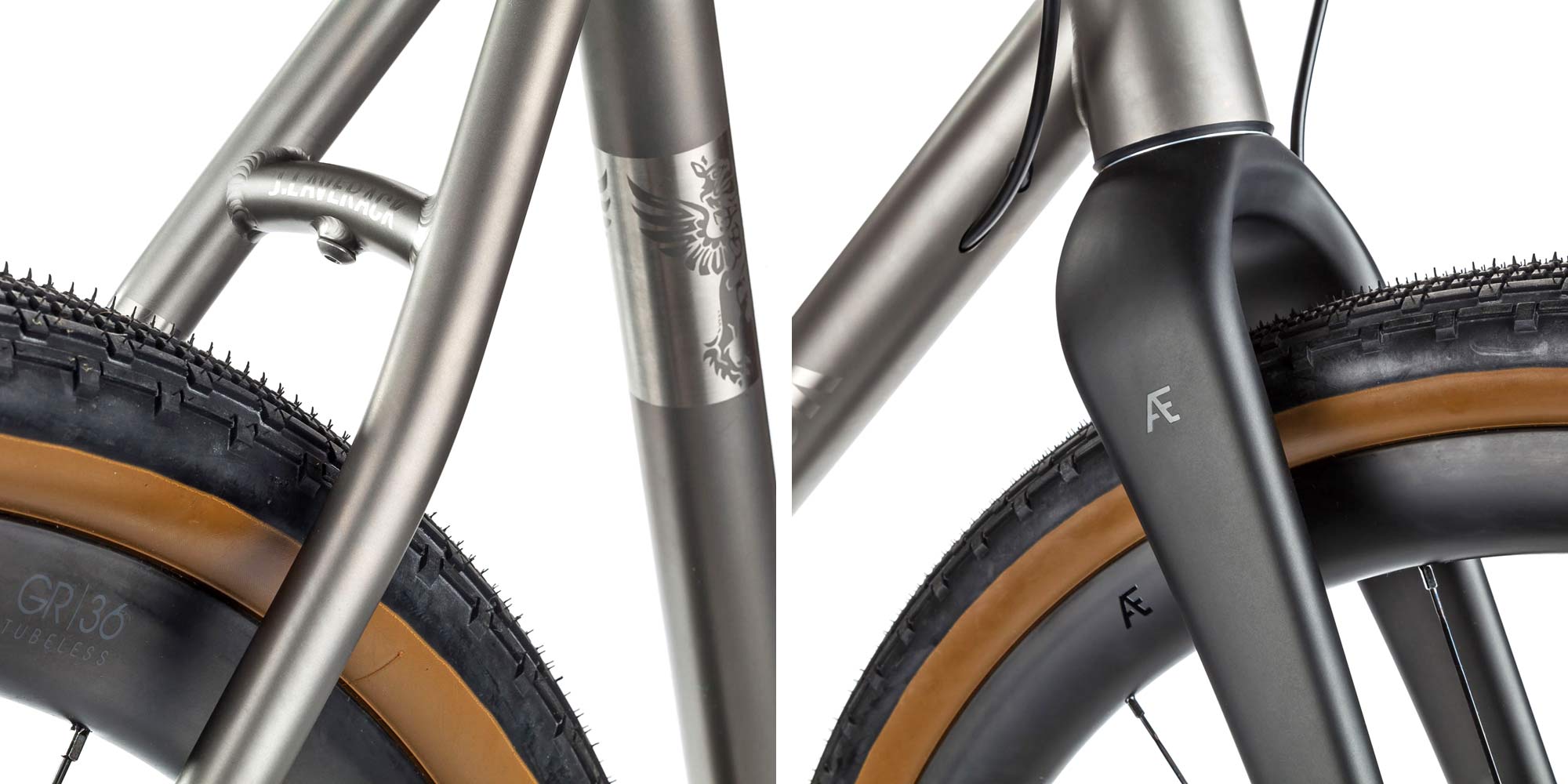 In development almost since the debut of their first all-road bike, the Grit is a no-compromise & no-limits gravel bike. It’s hard to argue with the durability and smooth ride of titanium for adventuring across rough dirt & gravel roads.

Built to ride the roughest & toughest roads around, the new Grit was developed with even more clearance for bigger tires. Matched with a new, longer rake full carbon fork from ÆRA, the Grit frameset offers room for up to 52mm wide 650 tires or even 700 x 48mm rubber. 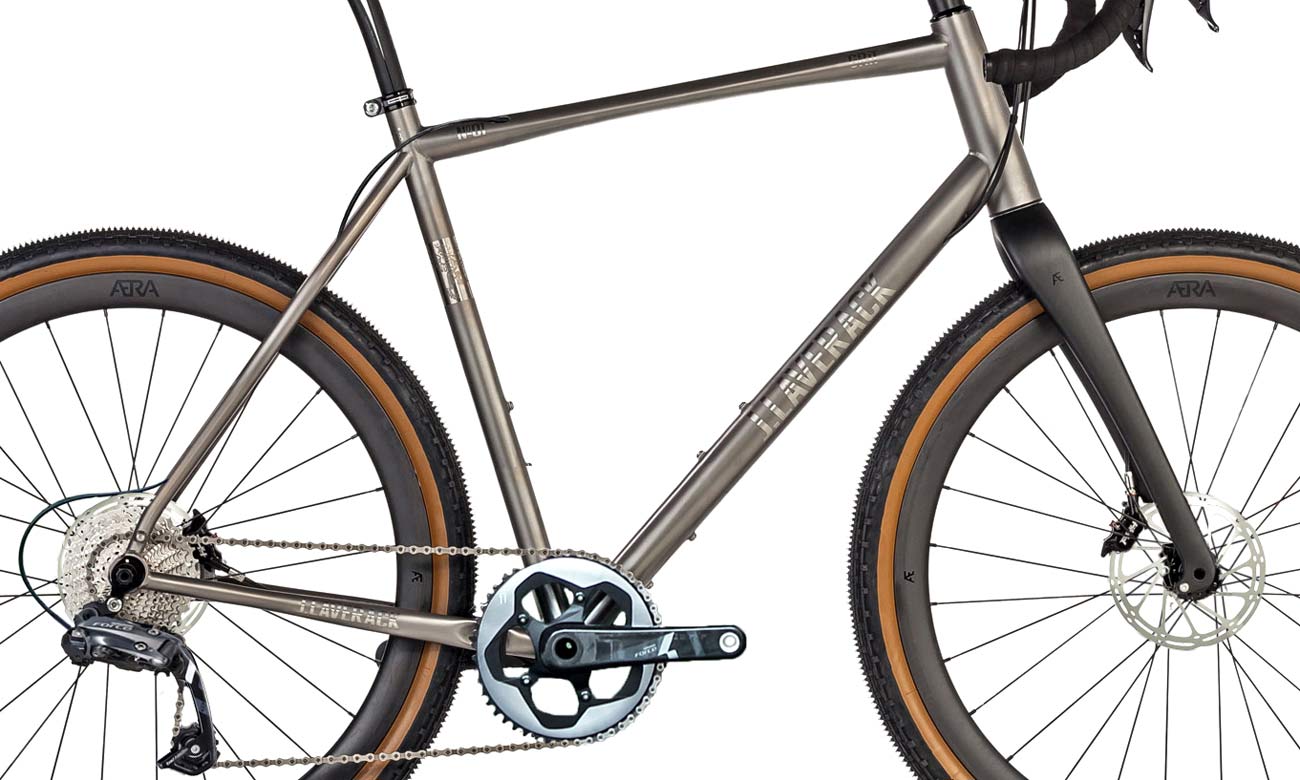 The standard geometry on the Grit is also stretched out a bit more than their J.ack to provide more clearance between a rider’s feet and the biggest front tires for navigating the most technical terrain off-road. Add to that longer 435mm chainstays for better traction & handling over loose surfaces, and for stability at high speed. All Grit bikes are designed to be built up with short stems and wide flared drop bars to keep weight balance a bit rear-focused for light, quick handling.

But J.Laverack bikes are made to order, so custom geometry is possible too if you have a more narrow definition of what gravel adventure means to you. Bike fitting is available if you come to J.Laverack’s showroom in Oakham.

The oversized 3Al-2.5V titanium Grit features a 1.5″ tapered headtube for an internal headset, gets 12mm thru-axles and flat mount brakes standard. The bike comes stock with a traditional threaded bottom bracket, but buyers can upgrade to T47 if they want. 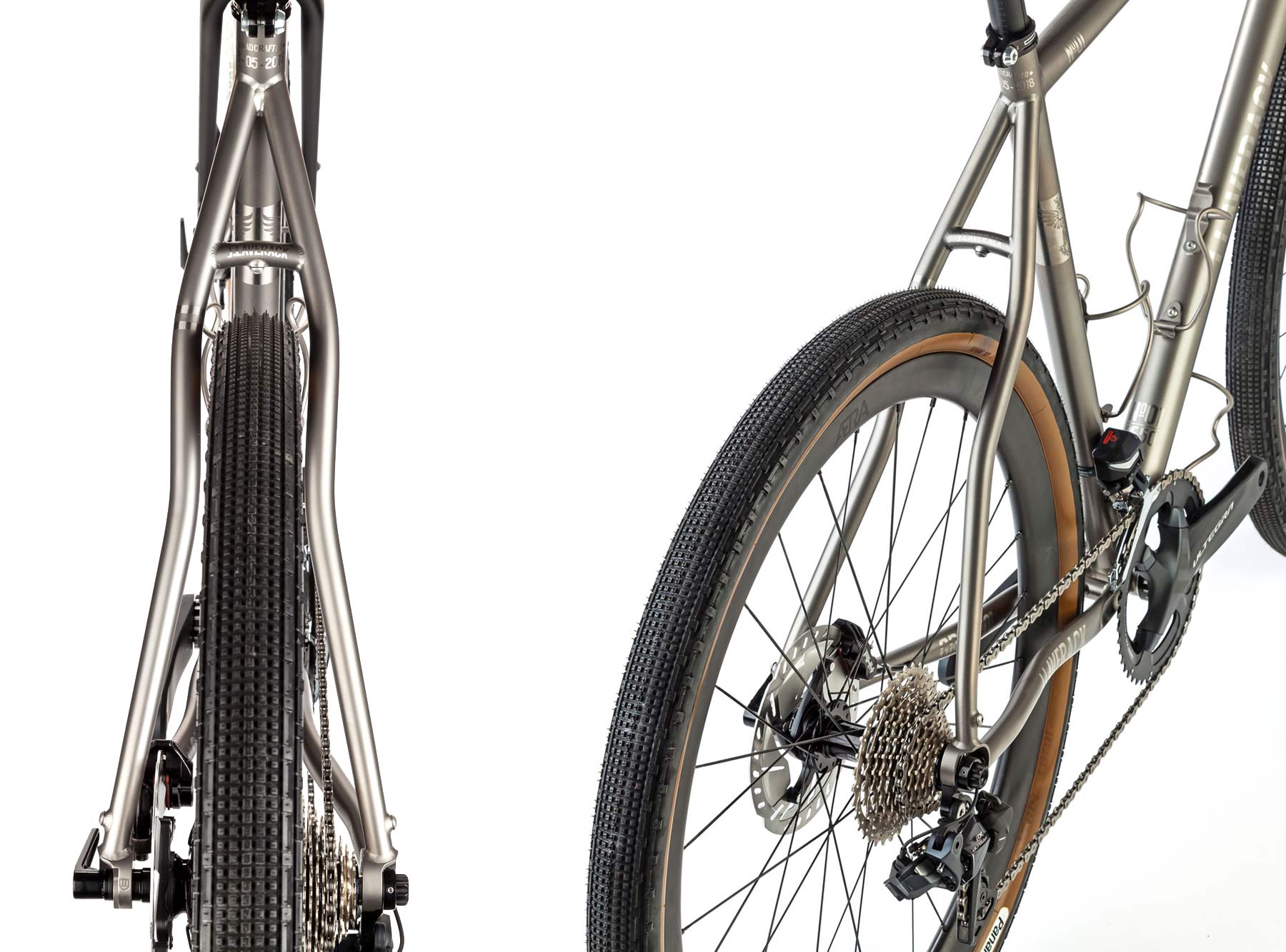 The bike features internal cable routing, and can be set up for 1x or double drivetrains, and mechanical or electronic shifting. Rack & fender mounts are optional but at no extra cost, as is a third set of water bottle bosses. You can even get the Aera fork with internal dynamo routing. 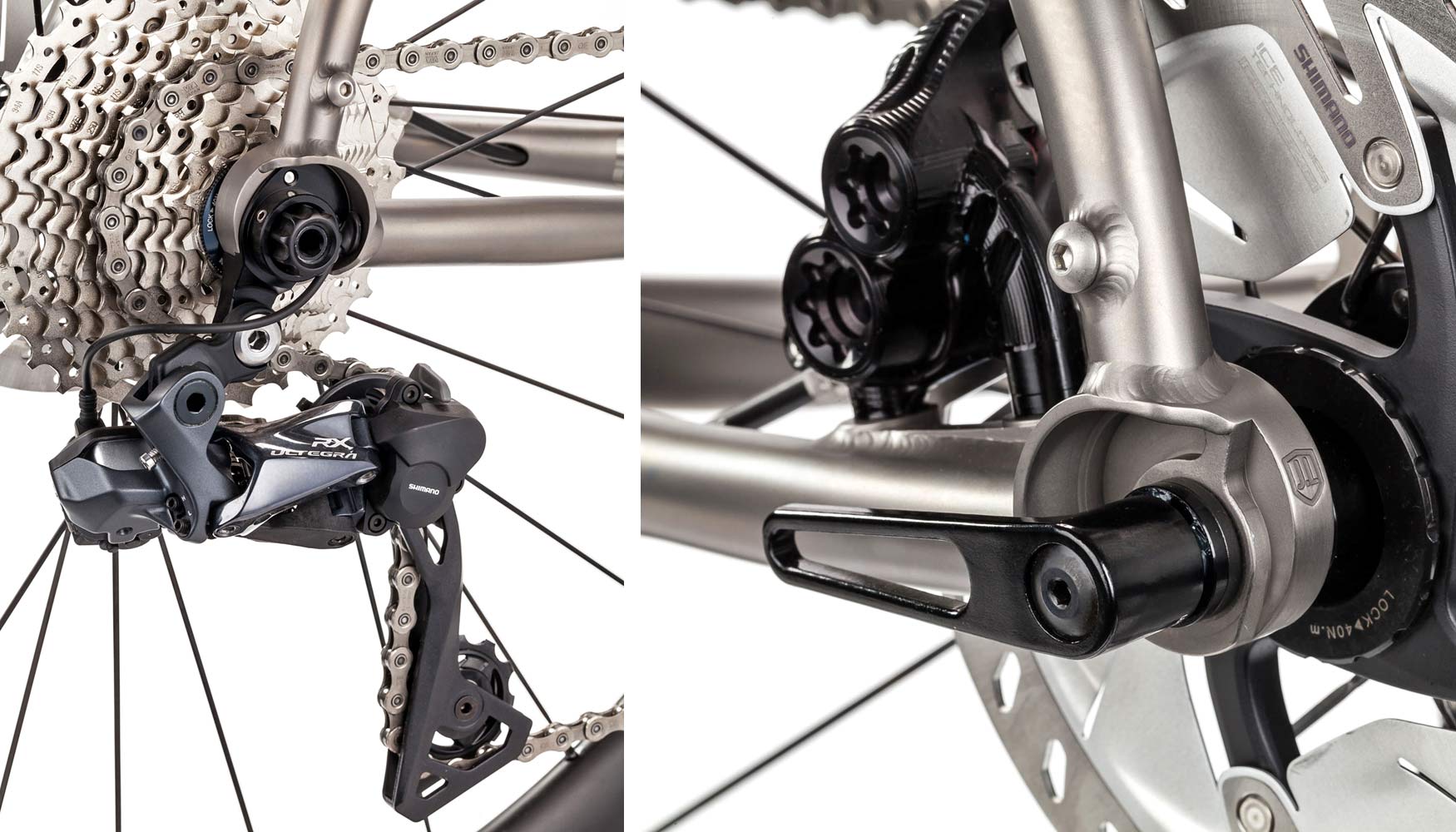 Further customization can include an engraved headbadge (over the stock metal badge) or customizable bead blasted graphics and logos. 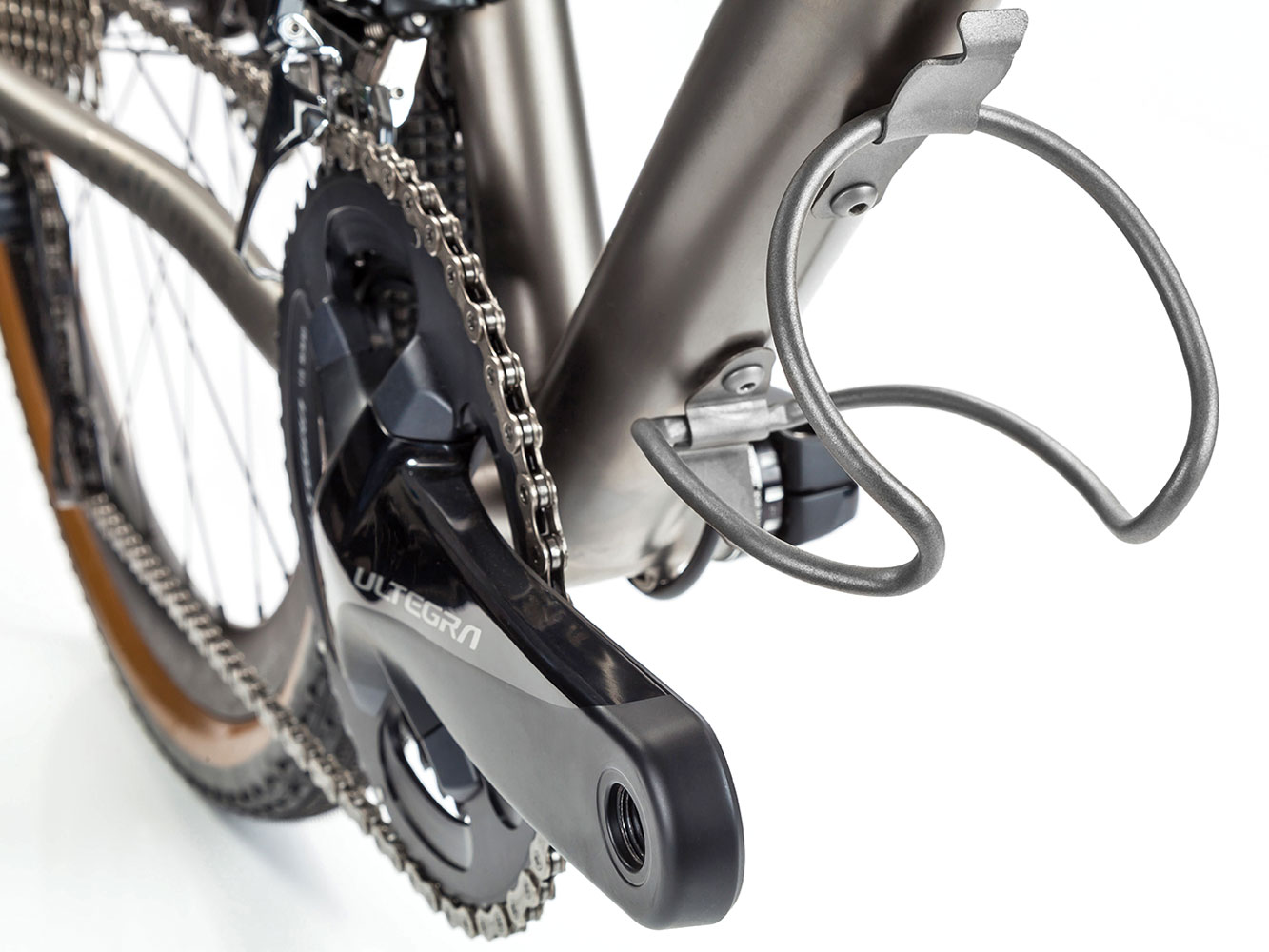 Again, the bikes are made-to-order so the options are pretty wide open. Spec your own Grit for anything from Transcontinental touring to weekend gravel road exploring. 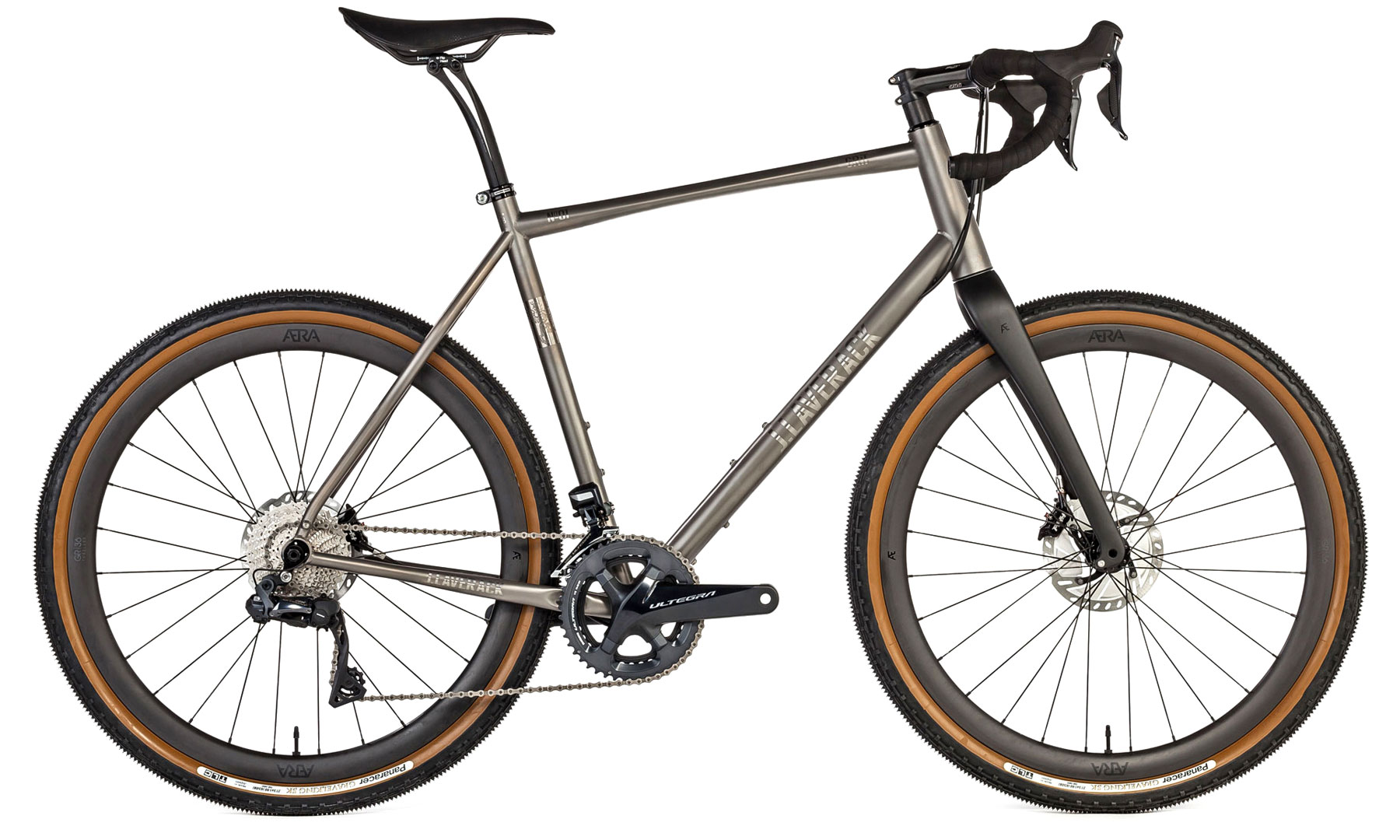 Complete GRiT bike builds start at around £3850 (~$5010/4375€), plus another £1100 for carbon wheels with Hope hubs. Shimano builds typically go 2x with a clutched Ultegra RX rear derailleur or SRAM 1x. Upgrades to four-piston Hope RX4 calipers are possible, as is an Ergon split leaf comfort seatpost. But again, everything is made-to-order so the sky is effectively the limit on custom bike builds.

Besides their relatively affordable titanium frameset pricing, J.Laverack also does pretty well to get a custom-made frame back to you quickly. Even though the frames are produced one-at-a-time in Asia, J.Laverack says they typically can turn around and ship customers their framesets in around one month from when final details are approved.

Sweet. This is so new and innovative. No one is making gravel/allroad/bikepacking/adventure titanium bike that cost $3000 for a frame set. These guys are really filling a niche that is going unfulfilled. I don’t think they will be able to keep up with demand.

BR wouldn’t be BR without sarcasm.

BR, you guys need to review a J.Laverack bike. They seem to get good reviews by the Brits, and they’re fine looking bikes that are competitively priced for Ti.

Is that a Canyon seat post? Anyone know if it’s available separately (in the US)?

It is an Ergon CF3 VCLS seatpost, which Canyon co-brands. It isn’t easy to find in the states as far as we know. It used to be available direct from Ergon, but no longer unfortunately.

1 month turn around!!! Rubbish, they told me 6 weeks its now been 18. Ordered and paid 50% in May. Not happy! Not getting much sense out of them either.