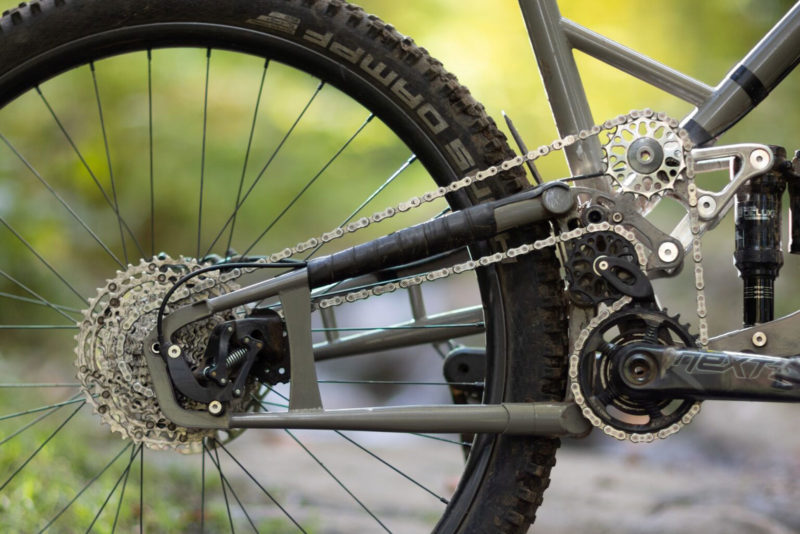 Canadian mechanical engineer, Cedric Eveleigh, has reinvented the mountain bike drivetrain specifically for high pivot suspension platforms. The Lal Bikes Supre Drive takes advantage of the space above the chainring to move the chain tensioning function of traditional derailleurs to the bottom bracket area, leaving the shifting mechanism at the rear wheel. The split derailleur concept is said to have numerous benefits, combining the best characteristics of a traditional drivetrain with the best characteristics of a gearbox. Here’s how it works.

A traditional derailleur serves two purposes; to shift the chain through sprockets of the cassette, and to tension the chain appropriately, taking up chain slack when shifting to smaller sprockets, and releasing chain slack when shifting into the larger sprockets. It combines these two functions into one unit that hangs precariously beneath the rear triangle, often bearing the brunt of rock strikes thus becoming the subject of many a trailside repair. 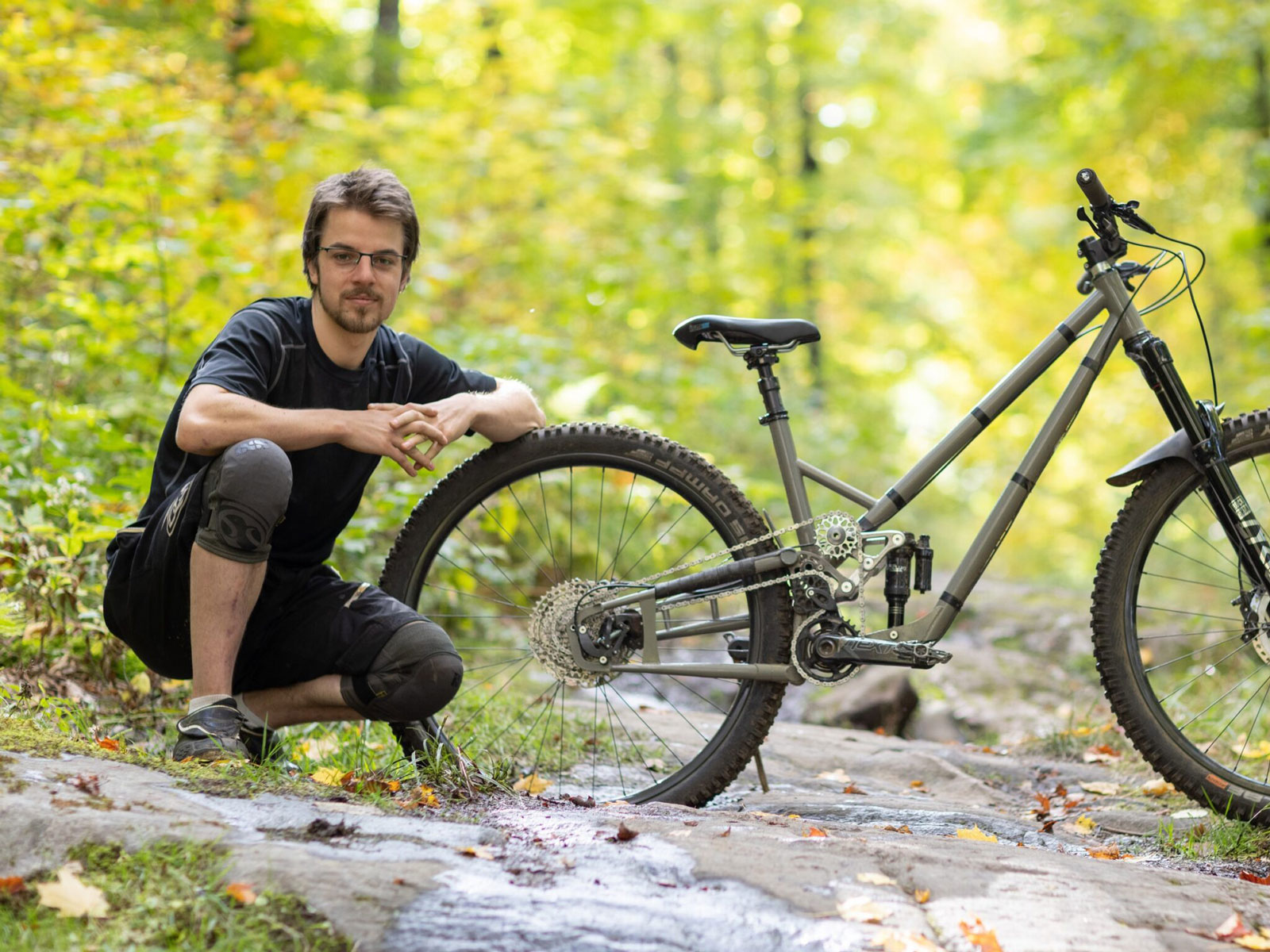 Lal Bikes are looking to fix this shortcoming of the traditional derailleur with the all-new Supre Drive drivetrain concept, invented by 26-year-old mechanical engineer, Cedric Eveleigh. The Supre Drive breaks down the two primary functions of the derailleur, sending the chain tensioning mechanism to a chain tensioner that pivots about the bottom bracket.

The Supre Drive was created specifically to work with high pivot suspension platforms, as the concept is simply incompatible with traditional suspension systems where the main pivot commonly occupies the space above the chainring. On the Supre Drive, that space is needed for the chain tensioner. 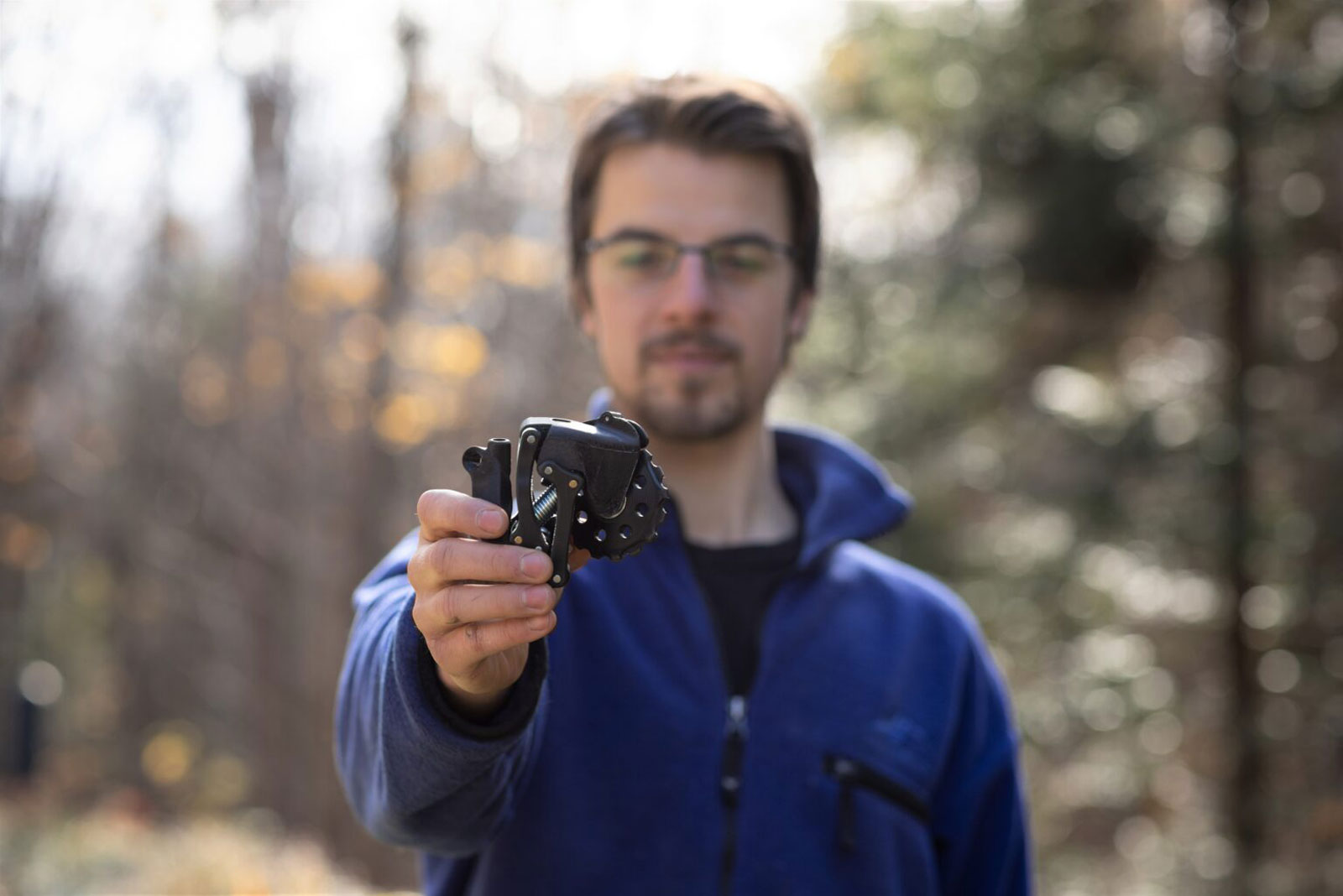 At the rear, a simplified derailleur carries out the primary function of shifting the chain through the sprockets of the cassette. It is much like a regular derailleur… cable operated, with a parallelogram body and spring, but lacks the chain tensioning function. Thus, there is no need for a B-Limit screw and an additional pulley wheel.

The Supre Drive derailleur has two mounting points that sit outboard of the swingarm, but the main body sits inboard of the frame. It is still a little exposed to rock strikes, but Lal Bikes say it is well braced to take hits. It’s not hard to see the derailleur is way better protected than a traditional derailleur, especially as it sits very high up with heaps of ground clearance.

The chain tensioner is the cleverest part of the Supre Drive concept. Here’s how it works… 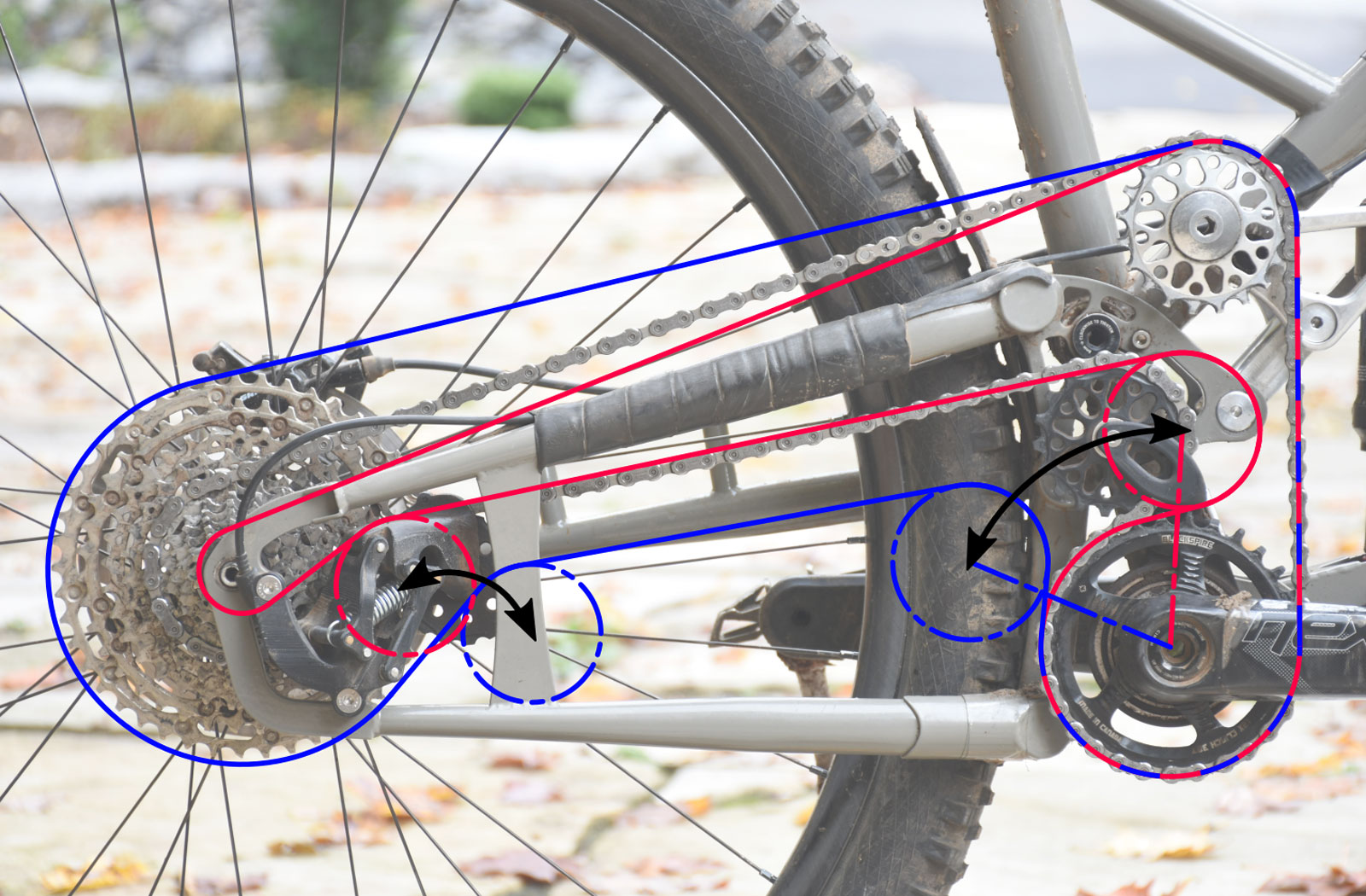 On Cedric’s prototype frame, the tensioner arm is connected by a cable to a cartridge that contains a spring and a damper – this is housed within the downtube.

As the derailleur shifts to larger sprockets, the chain tensioner pivots anti-clockwise to a more rearward position, delivering the additional chain slack required. The opposite is true when shifting to the bigger gears (smaller sprockets). In this case, the tensioner pivots in a clockwise fashion to a more forward position, taking up the chain slack.

Whereas conventional derailleurs produce increasing chain tension in the larger sprockets, the tensioner system of the Supre Drive is said to produce approximately constant chain tension across all gears. This is achieved by decreasing the leverage of the cable on the tensioner arm as the tensioner arm rotates back during shifts to larger sprockets. This decrease in leverage compensates for the increase in force from the spring. The reduced drag in climbing gears is said to be one of the benefits for high pivot suspension bikes which commonly suffer from increased drivetrain drag. 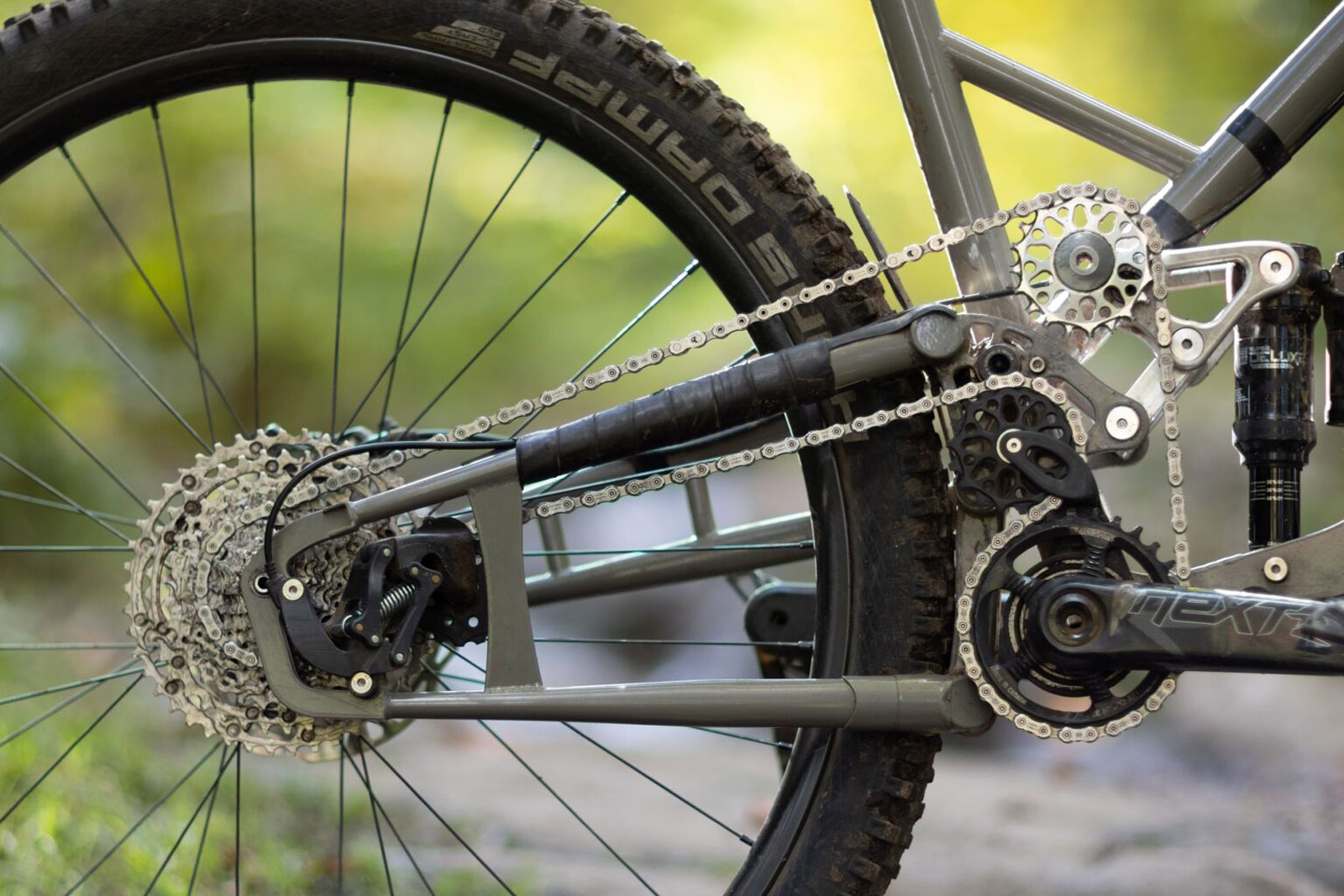 Drag is further reduced by the relatively large size of the tensioner and idler pulleys. The larger pulleys mean the chain articulation angle is smaller, resulting in less friction at this point in the drivetrain; this concept is the main selling point of oversized derailleur pulleys pushed by CeramicSpeed, AbsoluteBlack, and other manufacturers.

The damper that sits within the downtube-housed cartridge is hydraulic and is said to work far better than current derailleur clutches. This one is speed-sensitive, meaning that there’s a lot of force when the tensioner arm rotates fast (which occurs while riding over rough stuff) and there’s less force when the tensioner arm rotates slowly (which occurs while shifting).

Cedric’s current version of the Supre Drive is 12 speed, designed to work with a Shimano 10-51t cassette (though it is shown here with a 10-45T  cassette). Splitting the derailleur functions in this way does of course mean that, overall, the drivetrain is quite a lot heavier than a traditional derailleur drivetrain; approximately 100-200g. The split offers other benefits though, in addition to a much less vulnerable derailleur…

For a full-suspension bike, the new distribution of the chain presents a major advantage of the Supre Drive over traditional drivetrains. Placing the tensioner at the bottom bracket region means that, at any one time, more of the chain is situated closer to the bottom bracket, resulting in a reduction in unsprung mass (130g compared to XT). The derailleur itself also weighs less, of course.

I want to see Cedric take off the rear wheel.

It’s great that people are coming up with ideas for bike drivetrains, but wouldn’t the more simple & available solution be to use Pinion’s gearbox?

Interesting. Certainly different, and that will attract a good number of people who just want to be different. Remains to be seen, but could be lighter than a gearbox, and reliability. however, the problem it is intended to solve is a real one with 1X drive trains getting bigger and bigger cassettes, requiring longer and longer derailleurs ever more in harms way while riding. I for one am glad to see this and hope it does well.

cant fool me i can here the chain slap over the music anytime!

Solving a problem that hardly exists.
Adding complexity to the bike.

Not a mountain biker but defiantly see the benefit here. Great job thinking outside the box! 1X drive is a major help to this design; otherwise this would have been a lot more complex.
Would love to see this on trikes!

Possibly needs more chain wrap on the (single) rear jockey wheel to operate reliably. People tried to get away with single jockey wheels in the early days of derailleur development but they shifted poorly.