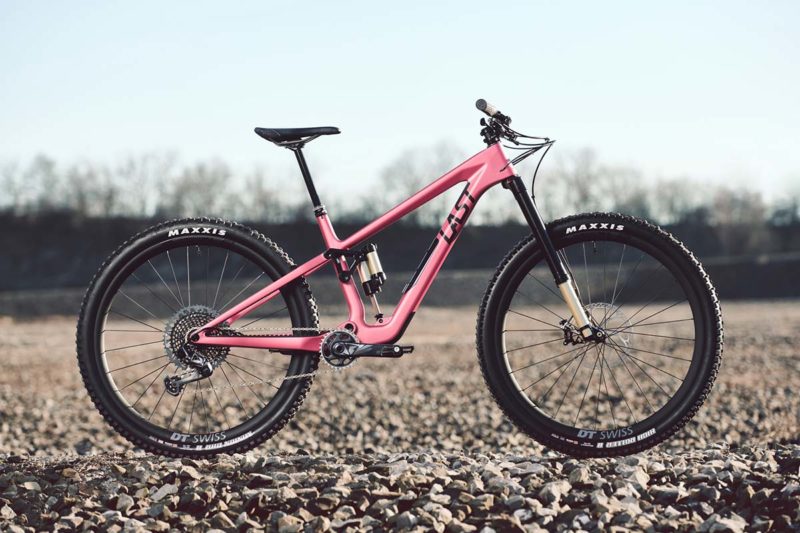 German mountain bike frame manufacturers Last Bikes have announced a new all-mountain addition to the stable; the Last Cinto. It bears a very strong resemblance to the Tarvo, which makes its claim as the lightest enduro mountain bike on the market.

With a claimed 2.1kg frame weight, the Cinto is also something of a featherweight. Its 145mm of rear wheel travel rolls on a 29″ wheelset paired with a 150mm fork. But, there’s a lot more to it than that, including a flex pivot and size-specific geometry and kinematics, and an MX version… 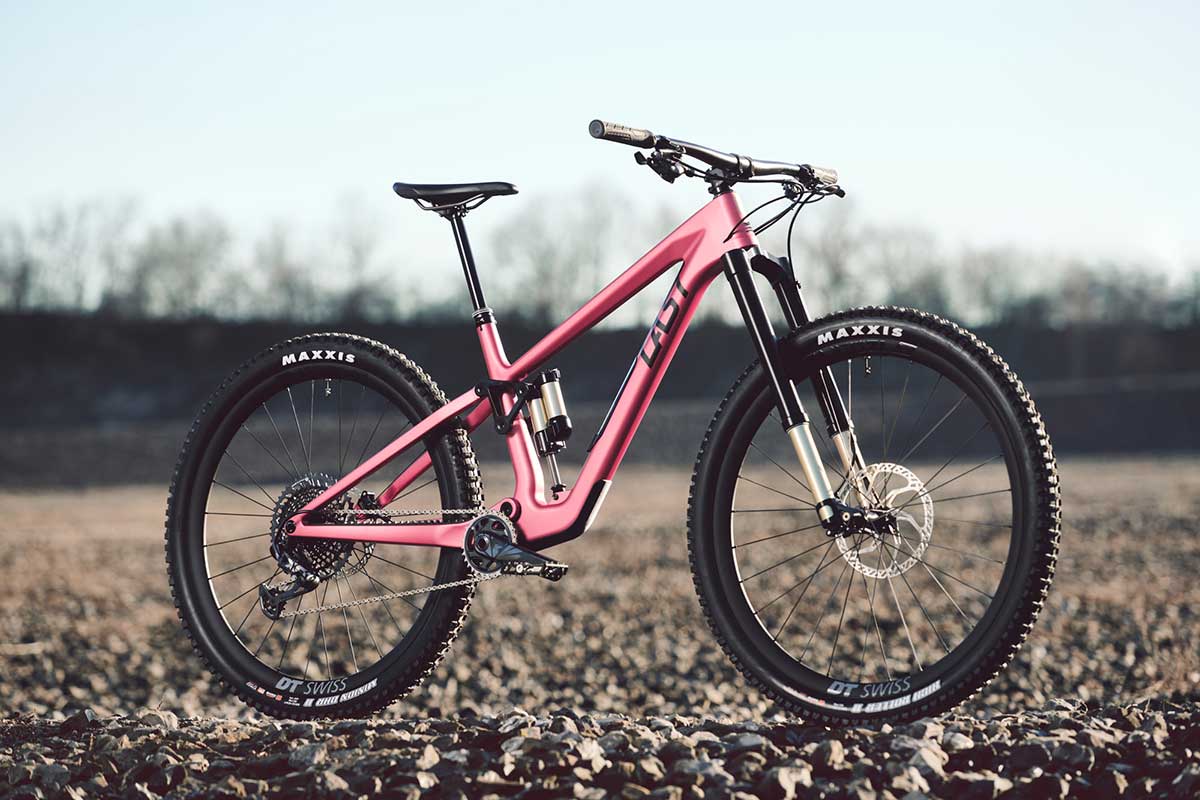 The Cinto is only the second full carbon frame full suspension mountain bike we’ve seen from Last Bikes. It matches the travel and much of the geometry of the aluminium frame Last Glen. From the numbers alone you could be forgiven for thinking the Cinto was the Glen’s carbon counterpart, but you’d be missing out on some crucial differences.

Where these bikes differ significantly is in their actuation of that 145mm of rear wheel travel. 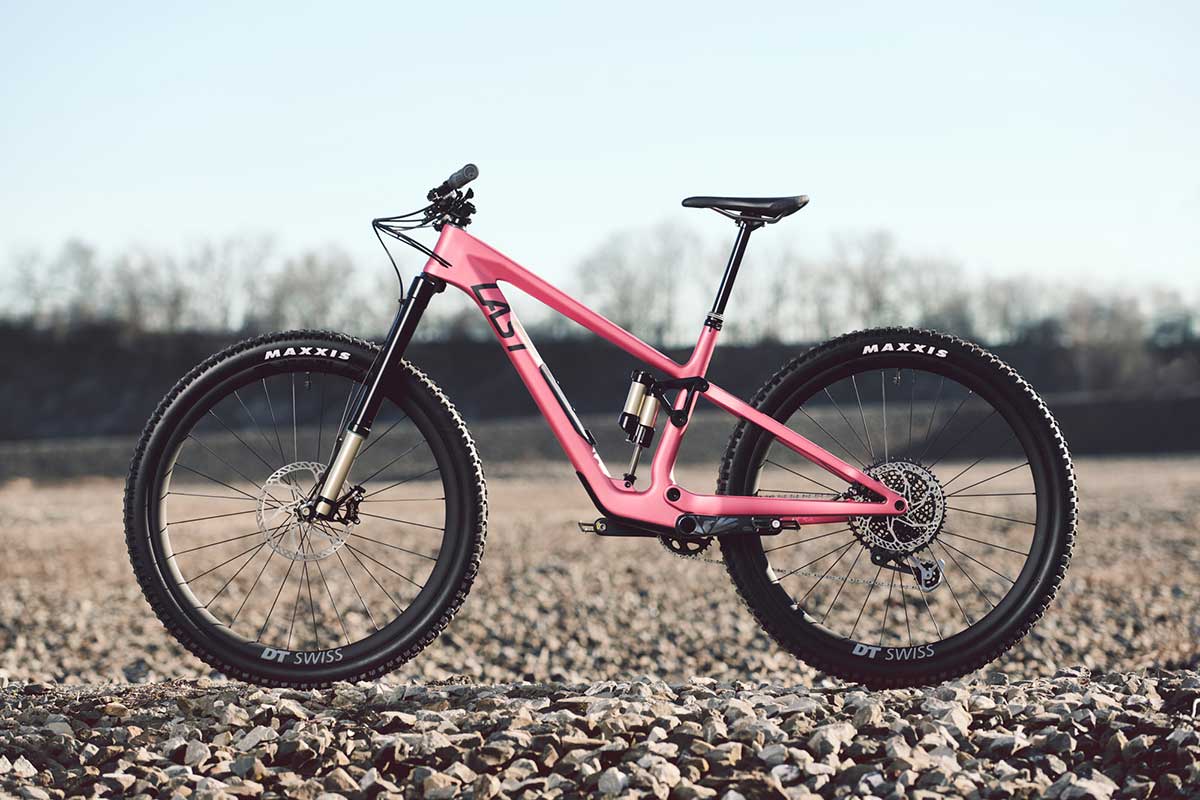 Where the Glen runs a single pivot linkage driven suspension design, the Last Cinto utilizes a flex pivot that relies on bending of the unidirectional carbon fibers in the seatstays. When it comes to suspension, the brand’s philosophy is to generate mid-travel support with progression in the leverage ratio, removing the reliance upon numerous volume spacers or excessive damping.

From SAG to bottom-out the Cinto leverage curve gives 29% progression, said to make it
suitable for air and coil shocks alike. That stands in great contrast to the 41% progression seen on the aluminium Glen. Despite their geometrical similarities, these are two very different mountain bikes.

The Last Cinto is available in four frame sizes, denoted by the typical rider height (in cm) each frame would best suit. As we saw on the Tarvo, the Cinto gets size-specific geometry and size-specific suspension kinematics, something rarely seen across the industry. 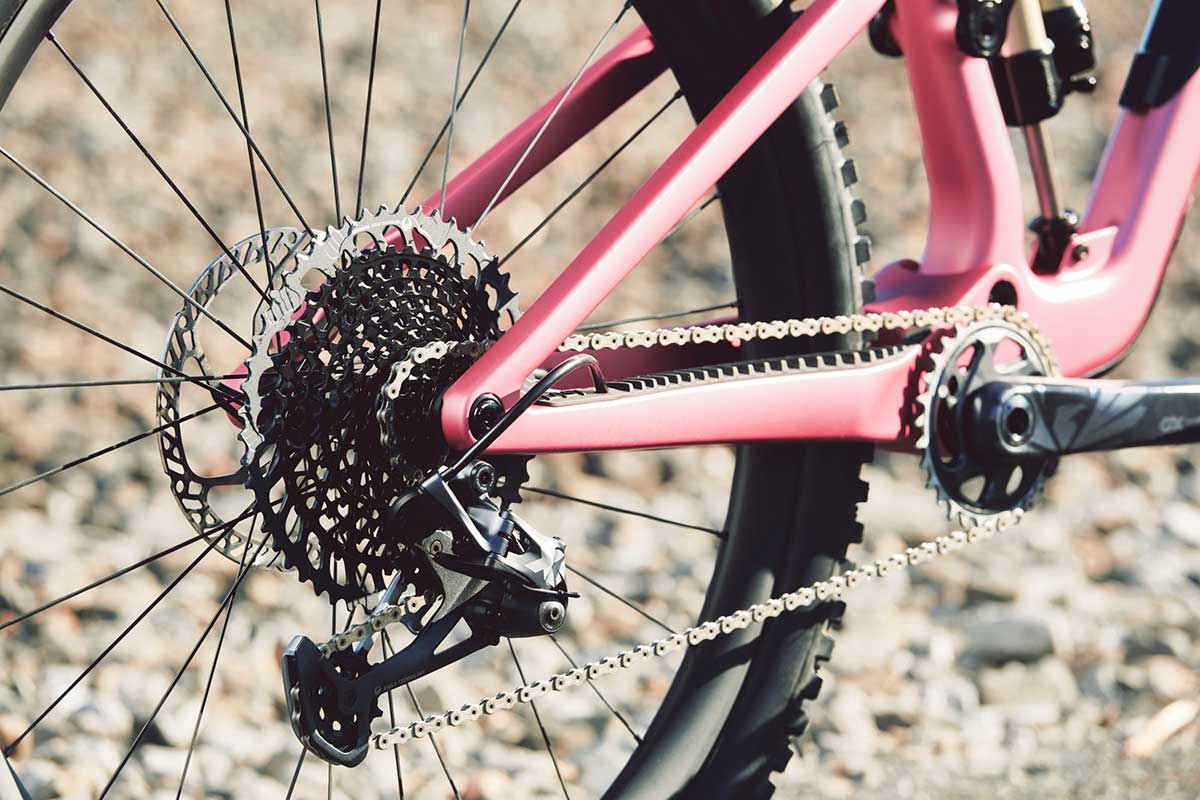 Cool, but what does that actually mean? Well, it means that for each frame size, Last have carefully tailored the placement of the main pivot, and thus the effective rear-centre length, to best suit the height of the intended rider’s centre of gravity. Other brands such as Privateer, Norco, RAAW, and on occasion, Santa Cruz, use this proportional design ethos.

The result is that Last Bikes can tailor the bike’s anti-squat and anti-rise characteristics to best suit different rider heights. It means that all riders, irrespective of frame size, should get the very same ride quality. It’s a nice idea but costly to implement, and no doubt a contributing factor the the Cinto’s 3,999 € frame-only price tag. 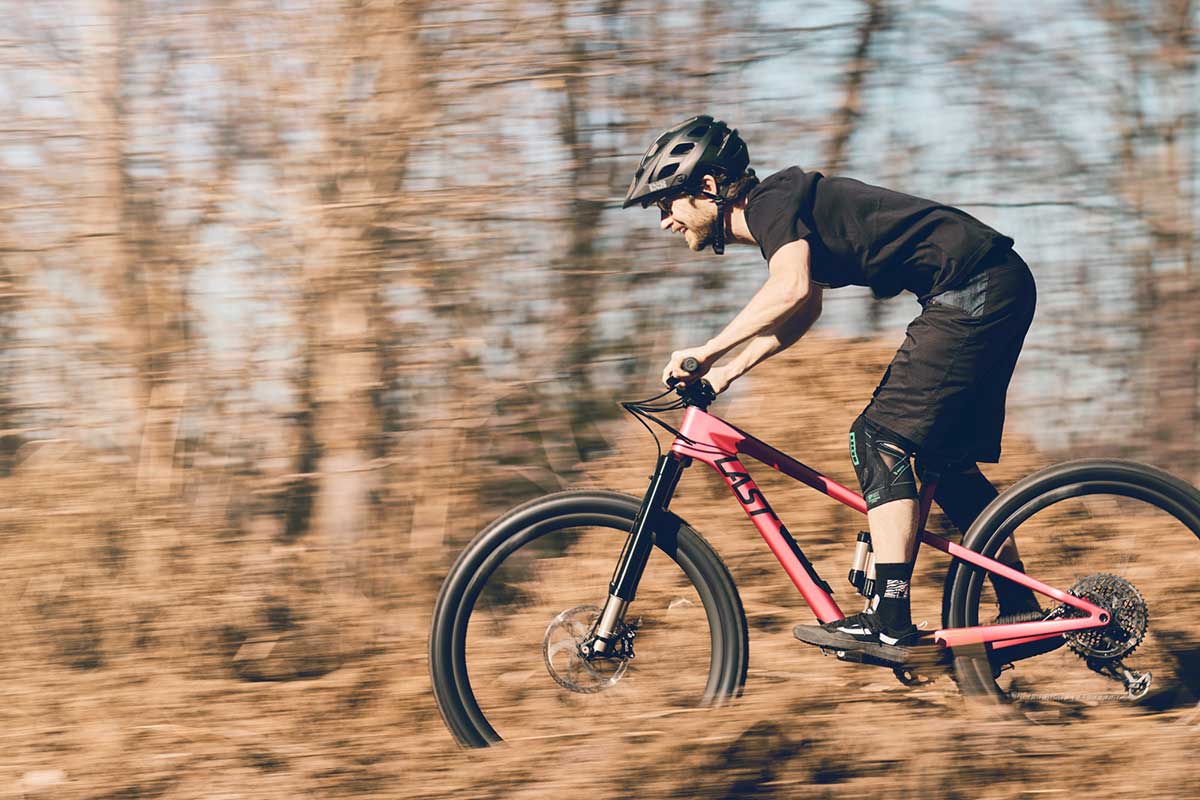 The Last Cinto gets a bottom bracket drop of 32mm, consistent across the 165-195 frame size range

The Cinto gets a modern all-mountain bike set of geometry figures. The head angle sits back at 65°, while the effective seat tube angle stands fairly upright at 77°, steepening up a smidgen in the larger frame sizes. 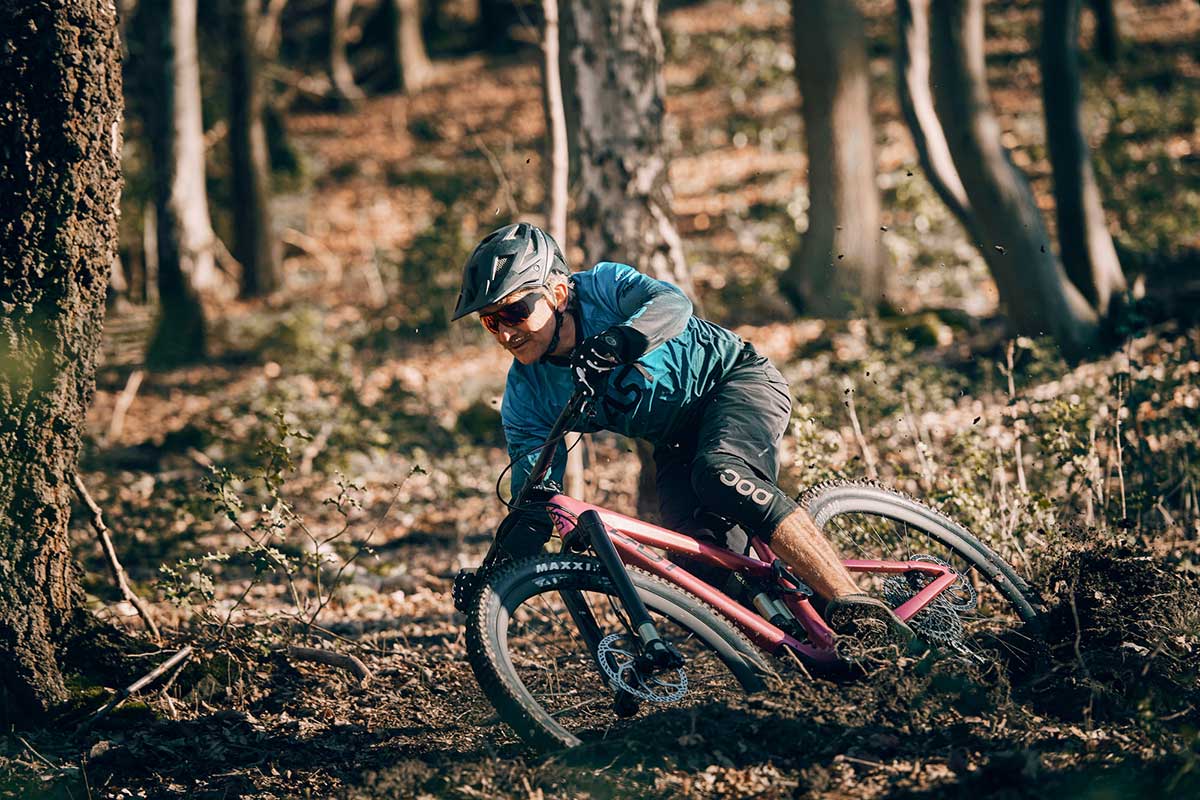 Last claim the Cinto has clearance for up to 2.5″ tires, depending on the tire/rim combination used

From the smallest 165 frame up to the largest 195 frame, seat tubes are short ranging from 385mm to 510mm. Reach numbers are generous, spanning a 442mm to 528mm range. In accordance with the size-specific geometry, chainstay length increases in line with a growing front triangle, starting at 431mm on the 165, extending to 443mm on the 195. 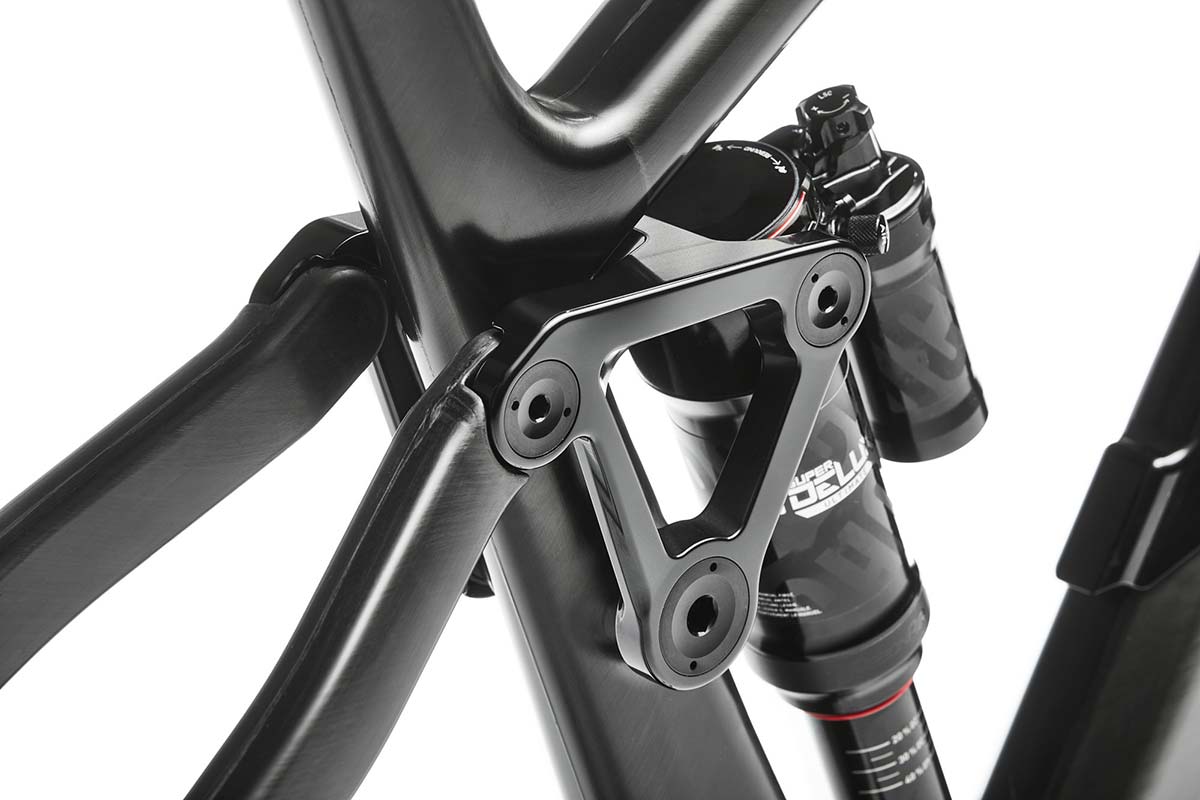 Though the stock Cinto runs a 29″ wheelset, it can also be set up as a mullet with a 27.5″ wheel in the rear. Last Bikes produce an MX rocker arm designed to maintain the bottom bracket height as well as the seat and head angles. 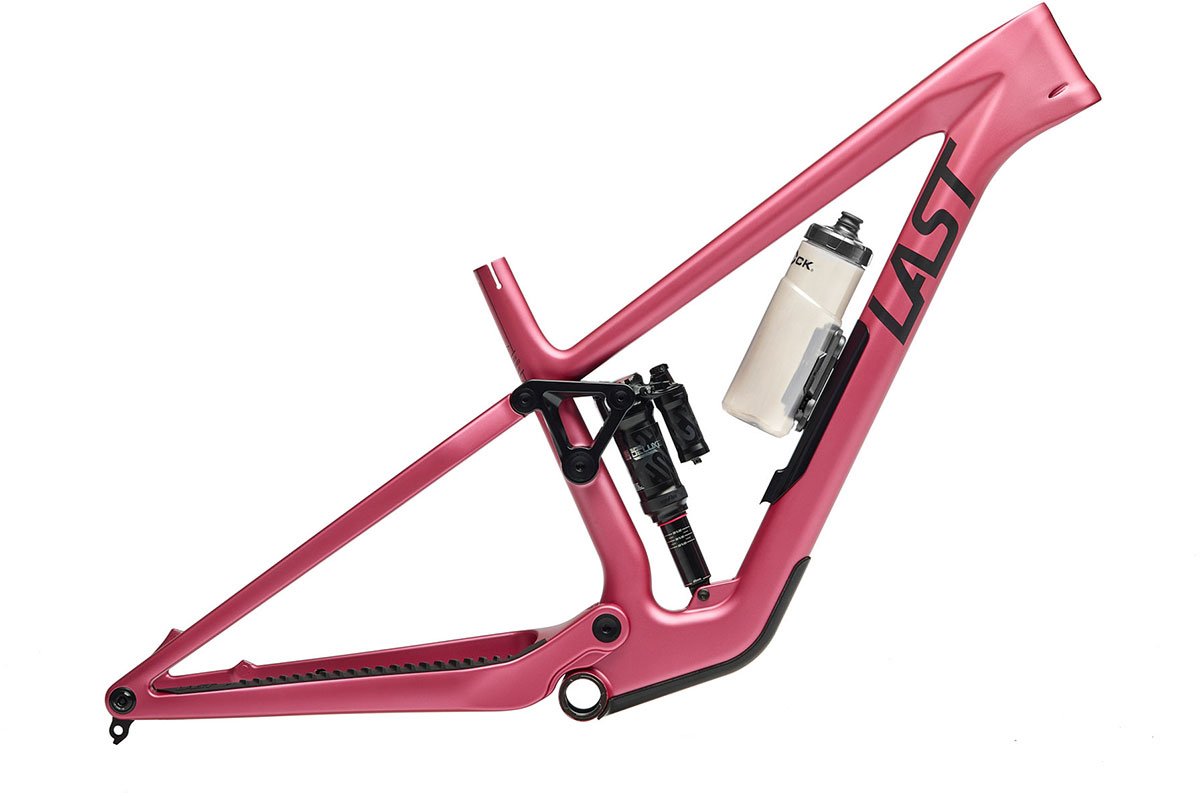 The Last Cinto gets some frame storage in the form of a hollow in the downtube, underneath the water bottle mount. The 165 frame can accommodate bottles up to 500ml with most piggyback shocks, while the larger frames can take 600ml bottles.

As we saw on the Tarvo which also runs a flex pivot suspension platform, the Cinto’s rear brake is mounted inboard of the seat and chainstays. This allows unhindered flex at the seat stays. There is clearance for rotors up to 203mm in diameter. 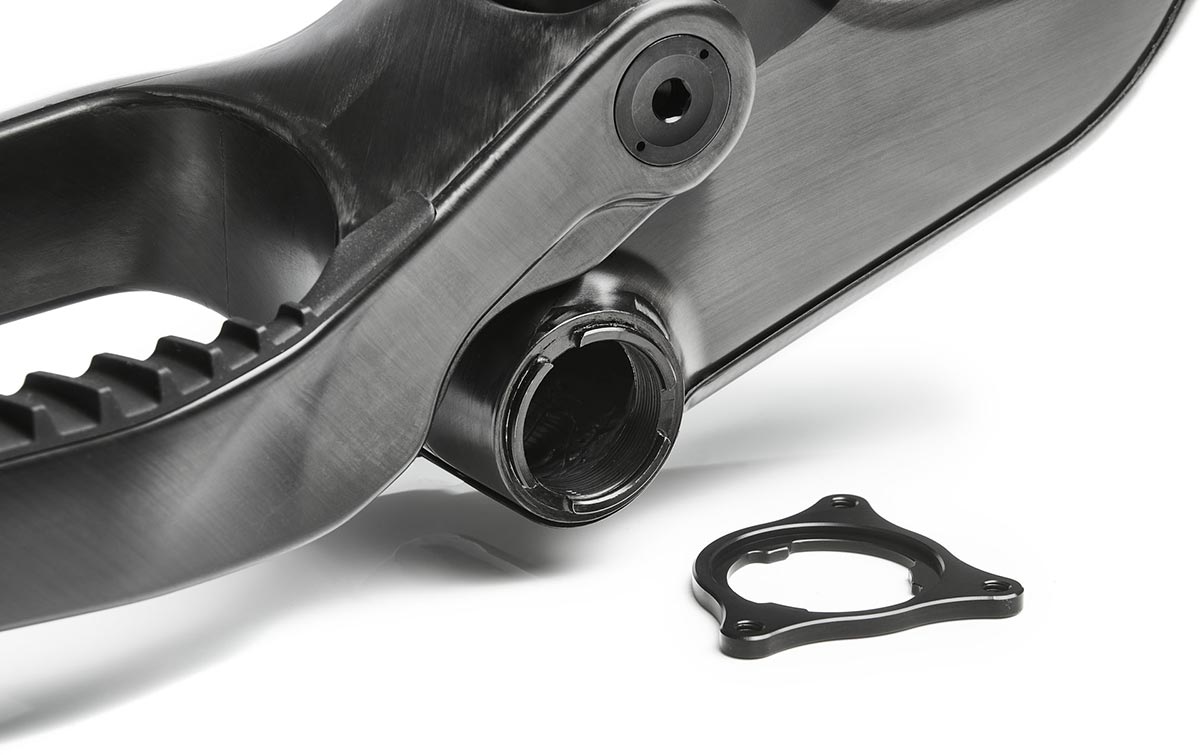 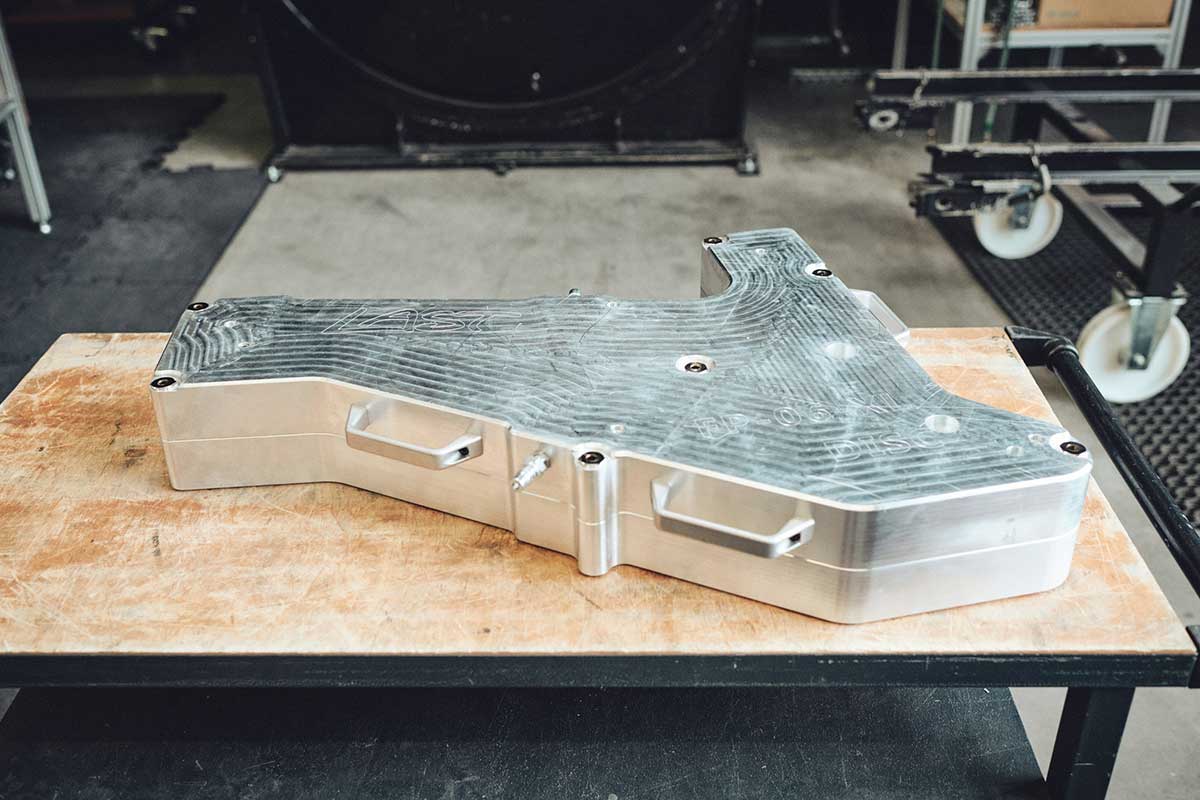 Like the rest of the Last Bikes’ fleet, the Cinto is handmade (to a point) in Germany. The front and rear triangles are each produced as a single piece in one mold. The monocoque design is said to feature a consistent laminate structure without any weak points. Last Bikes say this eliminates the need for heavy joints where material is often doubled up. 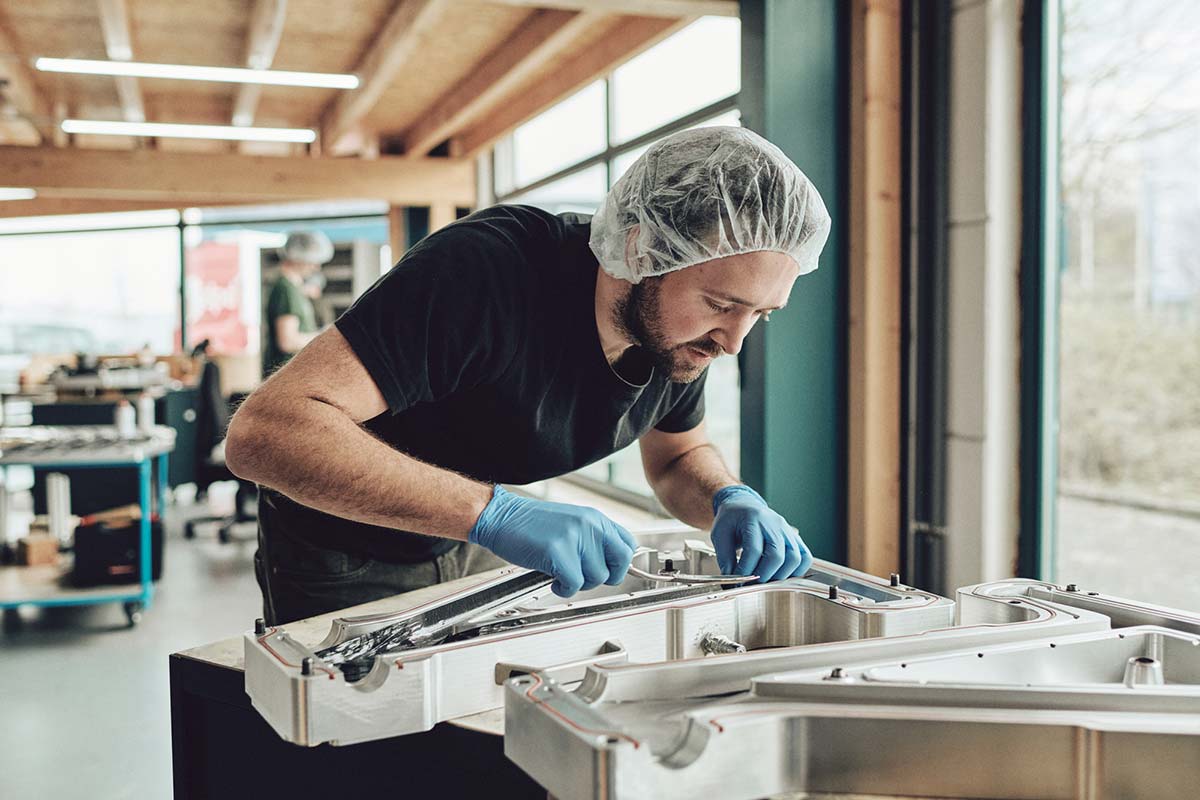 Fibers for the Last Cinto are produced in Japan while the pre-impregnation and weaving is done in Italy.

Once the composite is laid up, the prepreg layers are optimally pressed together using pressure generated by an autoclave. This step is key in the creation of a load-bearing structure. During this process a vacuum is created in the laminate to remove residual air. 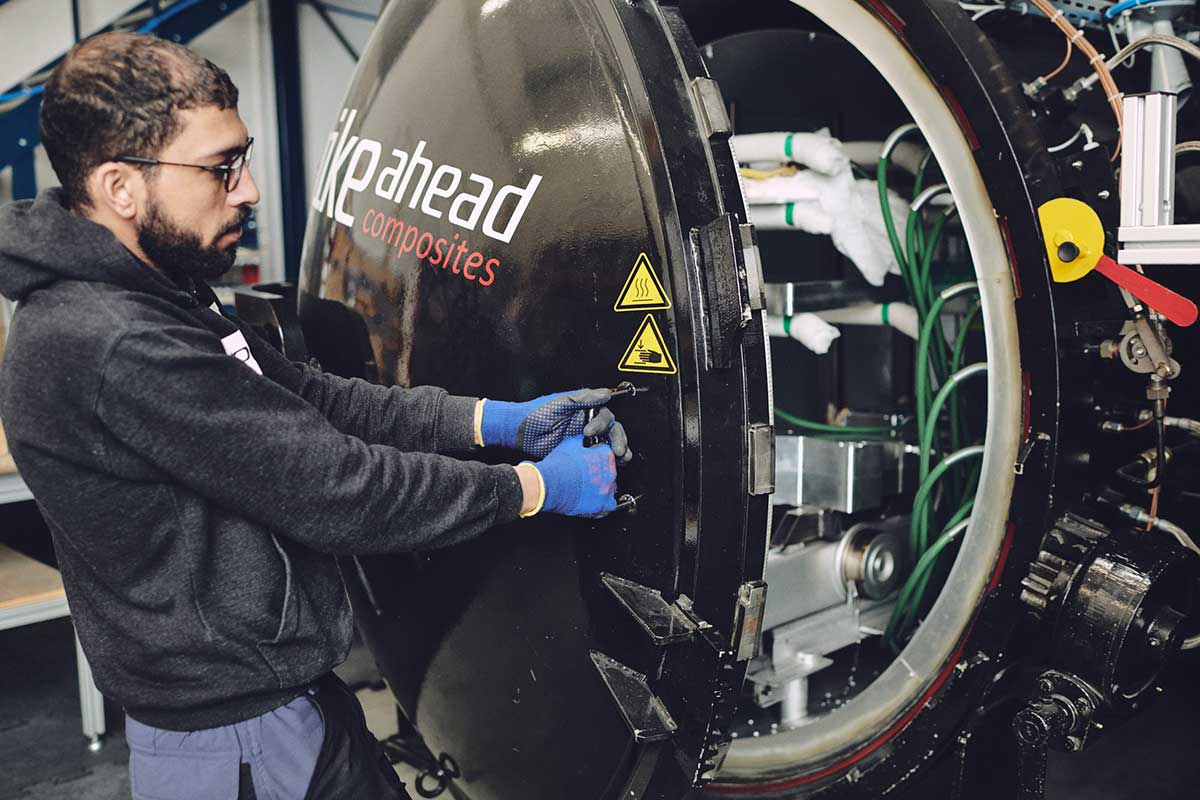 The Last Cinto is available as a frame only (no shock), retailing at 3,999 €. Get it in Dusky Pink, Matte Metallic or Blue Metallic. Or, pay an extra 399 € for a custom color of your choosing. 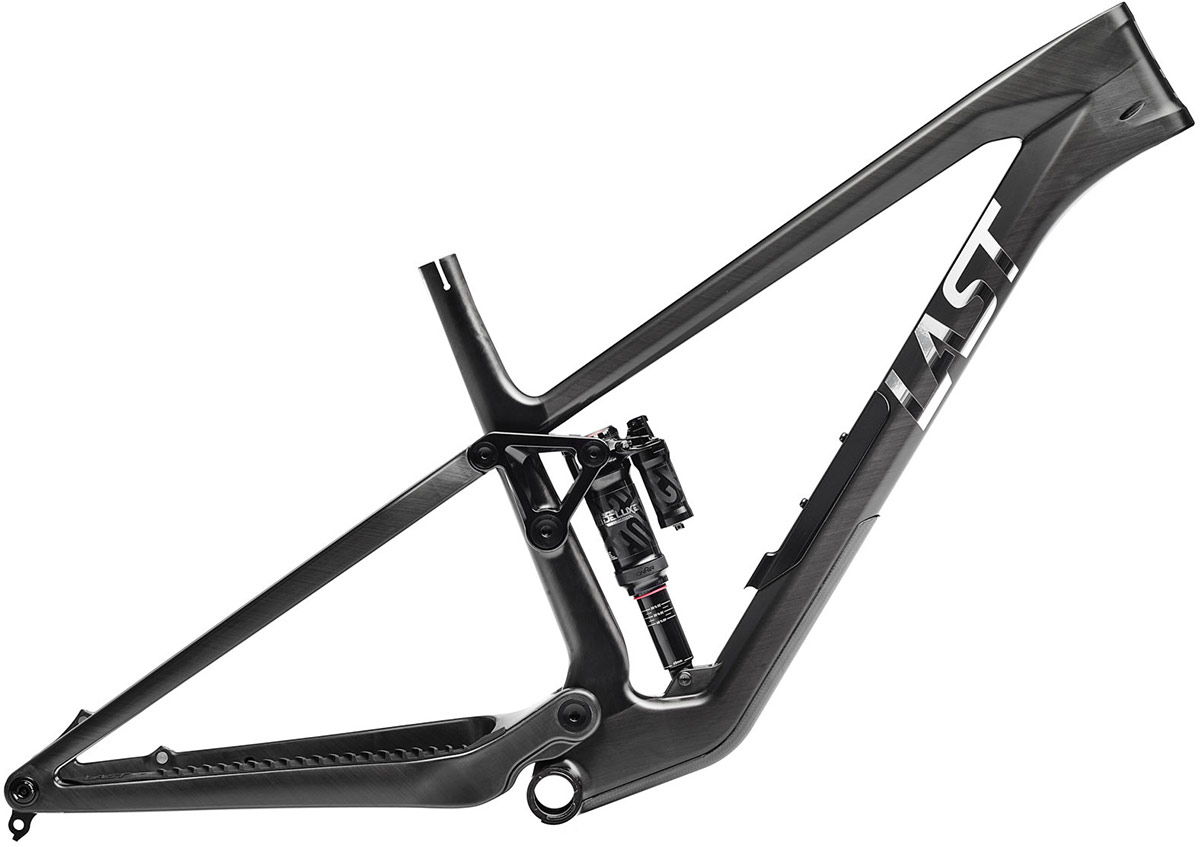 Complete builds start at 6,139 € and can be as light as 11kg, depending on what components you opt for. For complete info on specs and pricing, head to the Last Bikes website.

Well, I’m probably not going to buy one, but it would be cool if this bike were shown on Last’s website.

Sweet looking (and engineered) ride, though!

A mullet bike with a geo chart and actual information. Much better than another companies “secret” sause…..