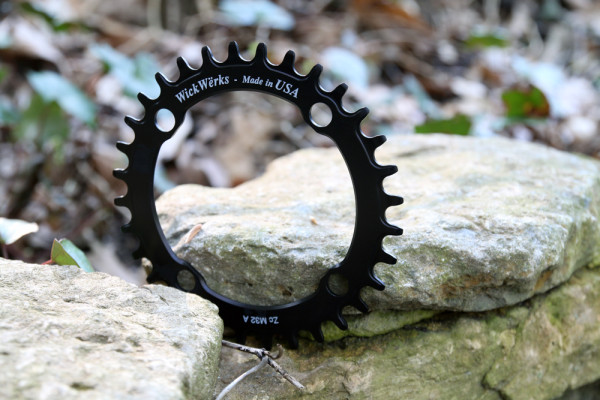 After the great 1x migration, quite a few manufacturers at this point have jumped in with narrow-wide chainrings of their own. And why not? The chainrings seem simple enough to design and any patents seem to be fairly easy to circumvent. However, not all narrow-wide rings are created equal, and as more riders switch over to the single front chainring options, tooth wear is becoming a common topic of conversation.

So how would a company go about creating a chainring with proper chain retention but with a design that doesn’t wear out as fast as others? Based on their first 1x mountain chainring, WickWërks is looking to replace narrow-wide with a Z… 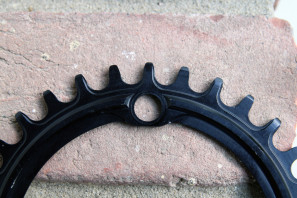 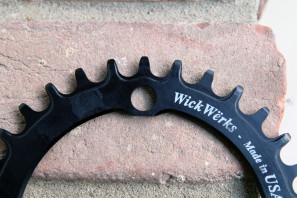 Where other chainring companies are using a narrow wide pattern for their chainring teeth, WickWërks is using a z-pattern. That is, one side of the chainring is the mirror opposite of the other. Using the photos above as an example, the wide tooth of the ‘narrow-wide’ pattern on one side of the ring would be the narrow tooth of the narrow-wide pattern on the other side of the ring. It’s difficult to make out in photos, but the concept seems very similar to the MRP Wave Ring design, but uses an alternating left-right z-pattern instead of the left-center-right pattern of the Wave Ring. Much like MRP’s chainring, WickWërks claims the design results in better chainring wear. Check out the WickWërks product explanation page for a gif illustration of how the teeth engage with the chain.

From the outside the chainring looks just like any other narrow-wide ring, it’s only when you realize the two sides are flipped that the design clicks. Like other WickWërks chainrings, the Z-Ring is Made in the USA out of 7075-T6 aluminum with a MIL Spec. Type 3 True Hard Anodized finish. 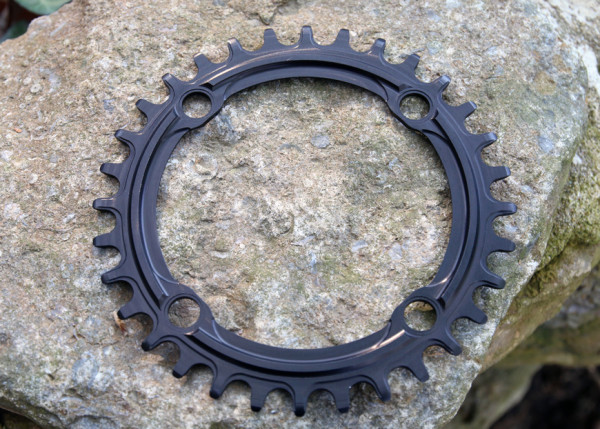 On the back side of the chainring you’ll find a reinforcing rib to offer plenty of stiffness. Initially available in three sizes, the 30t ring uses a 64mm BCD while the 32 and 34t rings will be available in 104mm BCD. Eventually a 36t 104 BCD ring will be added to the mix. 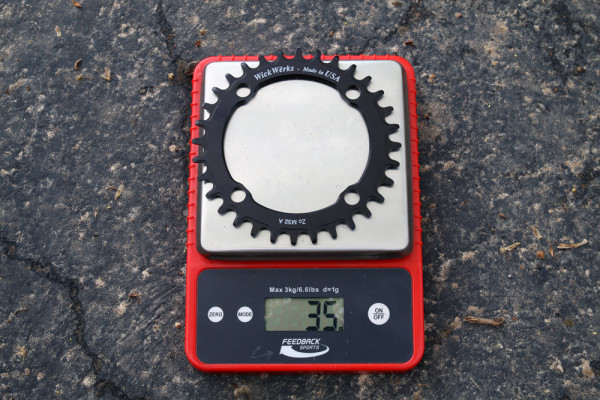 Eerrrrmmm? How does this work? Don’t you need the intermediate centre position as described on the mrp wave ring for the inner plates???

Could the author please elaborate because I’m properly confused!!!

Each tooth is narrow enough to fit in between the inner plates so a narrow tooth is supposedly not needed. Each tooth is just offset in a different direction making a ‘zig-zag’ pattern. But it seems like it would put stress on the chain or at least more wear as the narrow part of the chain won’t track straight down the ring but pushed to the side in the direction of the tooth offset. At least it would seem that way?

If it really works and the chain can go on any tooth, could these rings be used on a double or triple ring setup? I have yet to play with these narrow wide rings so probably not unless the derailleur somehow lifted the chain up and then over?

Well, can’t be any worse than a 2x/3x chainring.

That makes little sense, isn’t it the left right motion of the chain mixed with a bit of wave action that makes the chains fall.

This design just gives the chain all the room it needs to fall off more often.

My comment seems to have dissappeared, I’ve had a look on their website which does a reasonable job of explaining it. However I too am concerned about increased chain wear; Huzzah we have made a very long lasting nw chainring, but your chains now only last 500miles!!!

Is it not just the massively taller teeth that retain the chain better on a 1x drivetrain anyway? As long as the teeth fit snugly between the narrow plates on a chain, all this tooth width marketing seems to be utter fluff.

All this right fit and therefore extra wear, just makes me think they are less efficient as they add more friction?

Surly makes nice narrow wide stainless steel chainrings – one of those should last for a long while. Now if they could only make them in 104bcd… although I wonder why someone else can’t. Yeah, they will be double the weight, but I can surely accept extra 40 or so grams in return for much better durability.