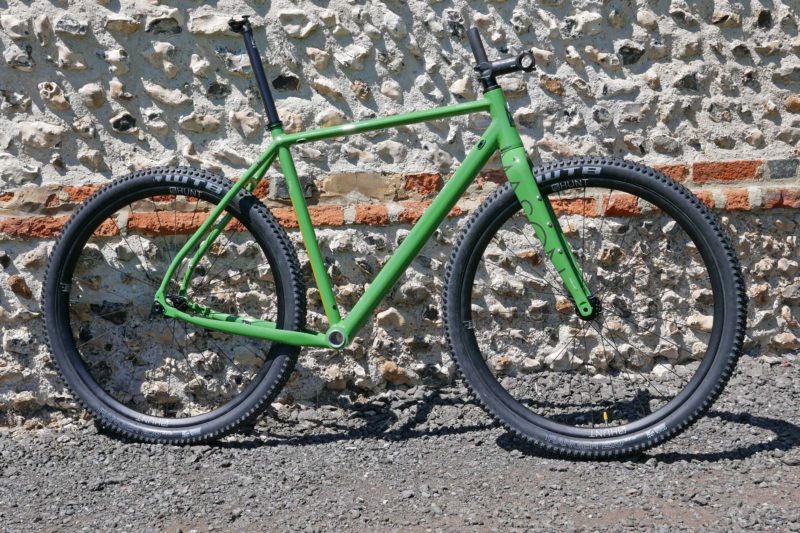 When Mason debuted the 650b Bokeh back in 2016, it was billed more as an adventure road bike than a gravel bike per se. But in the years since, mixed-surface gravel adventure riding and even racing have blown up, and Mason has quietly rolled out a version 2.0 update to the Bokeh that makes it more capable than ever. 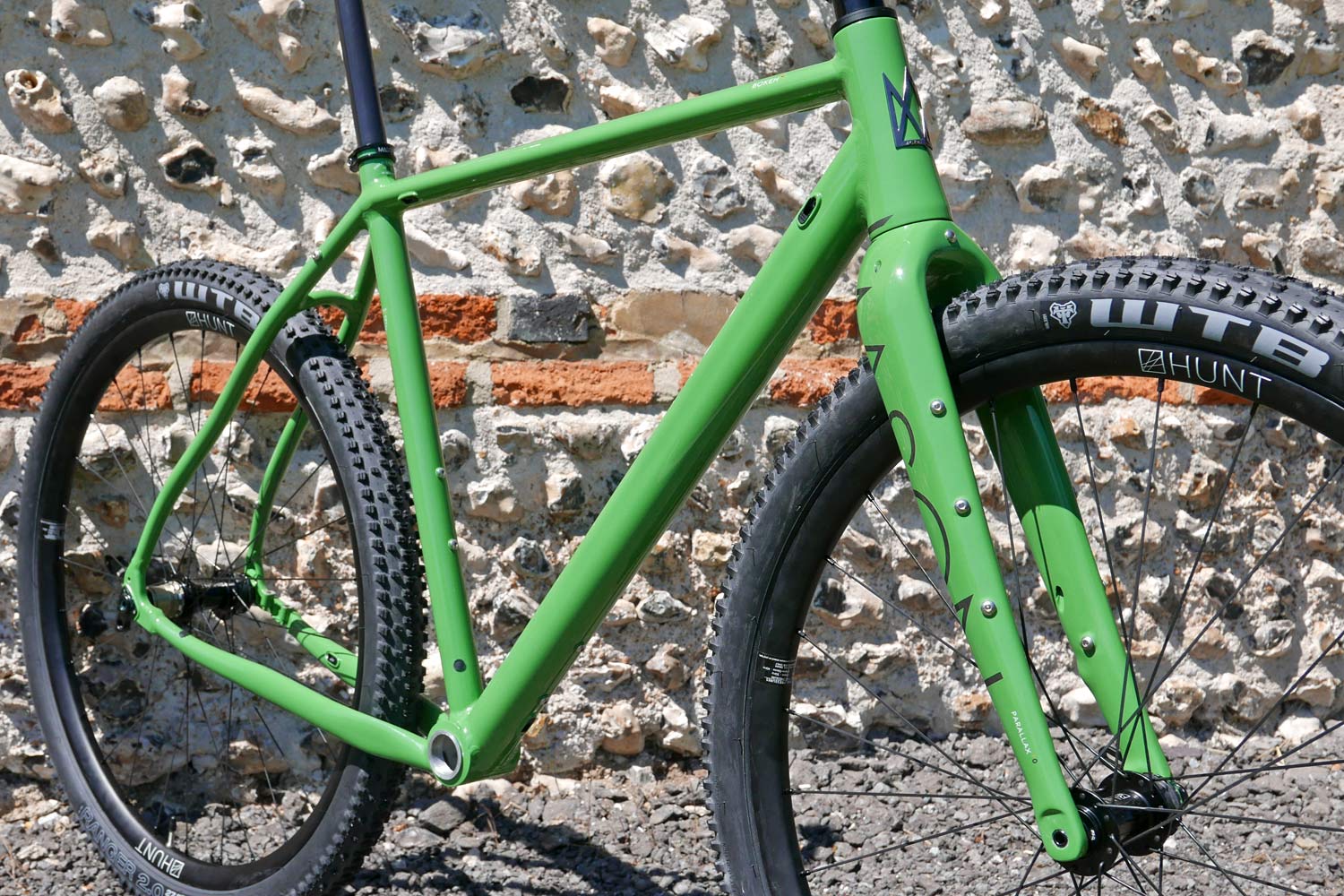 The Bokeh was created to expand the all-road capability their Definition already offered, moving in the adventure direction. And now this new update takes that all one step further…

What’s new on the Mason Bokeh 2? 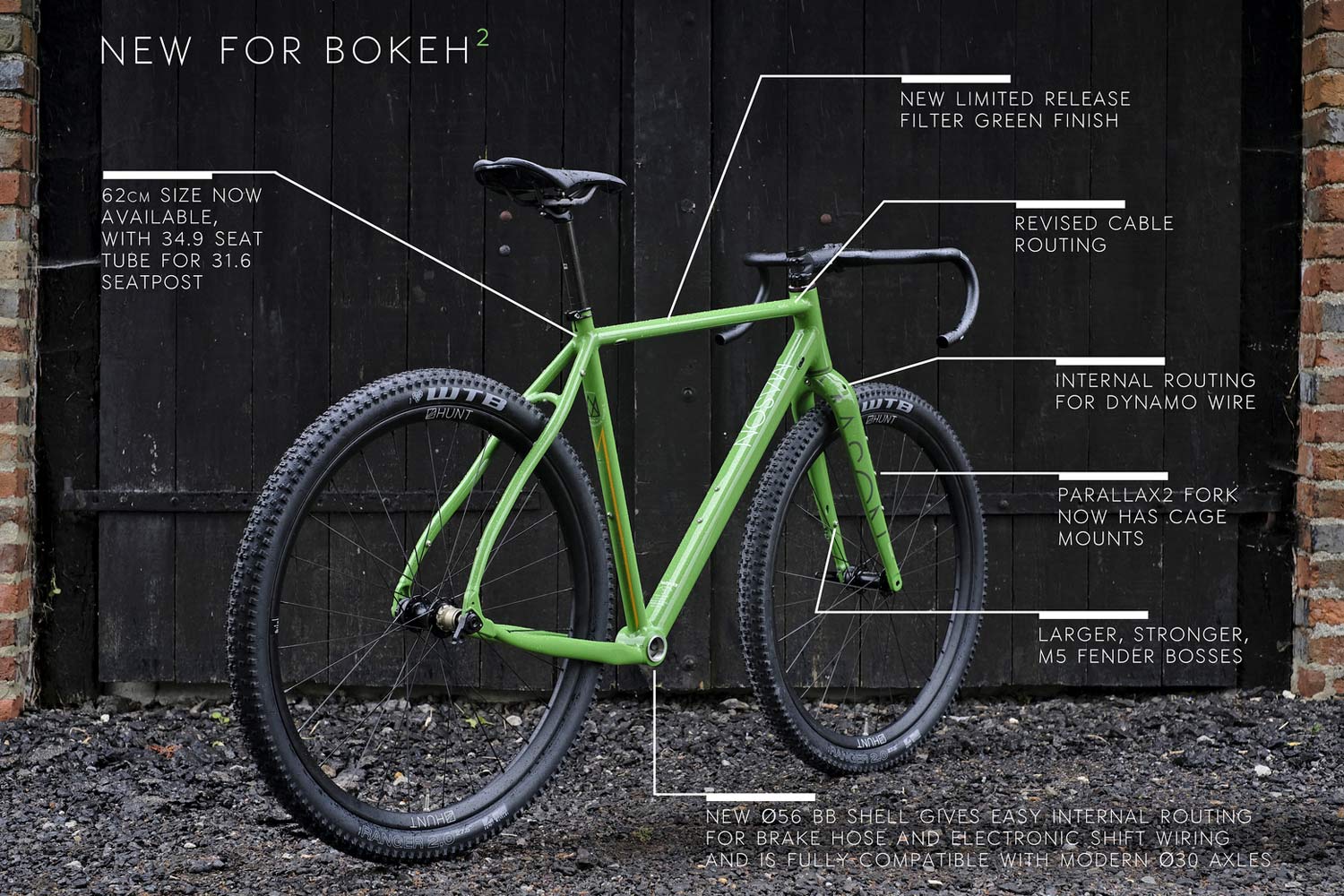 The new Bokeh 2 doesn’t really look any different beyond the snazzy new green paint job adopted from their 29er ISO, but Mason actually breaks down the updates pretty well in this graphic. The biggest change to the bike is actually the new, more capable fork – but the frame itself also gets improved routing, tubeset detailing, an extra frame size, and more tire clearance. 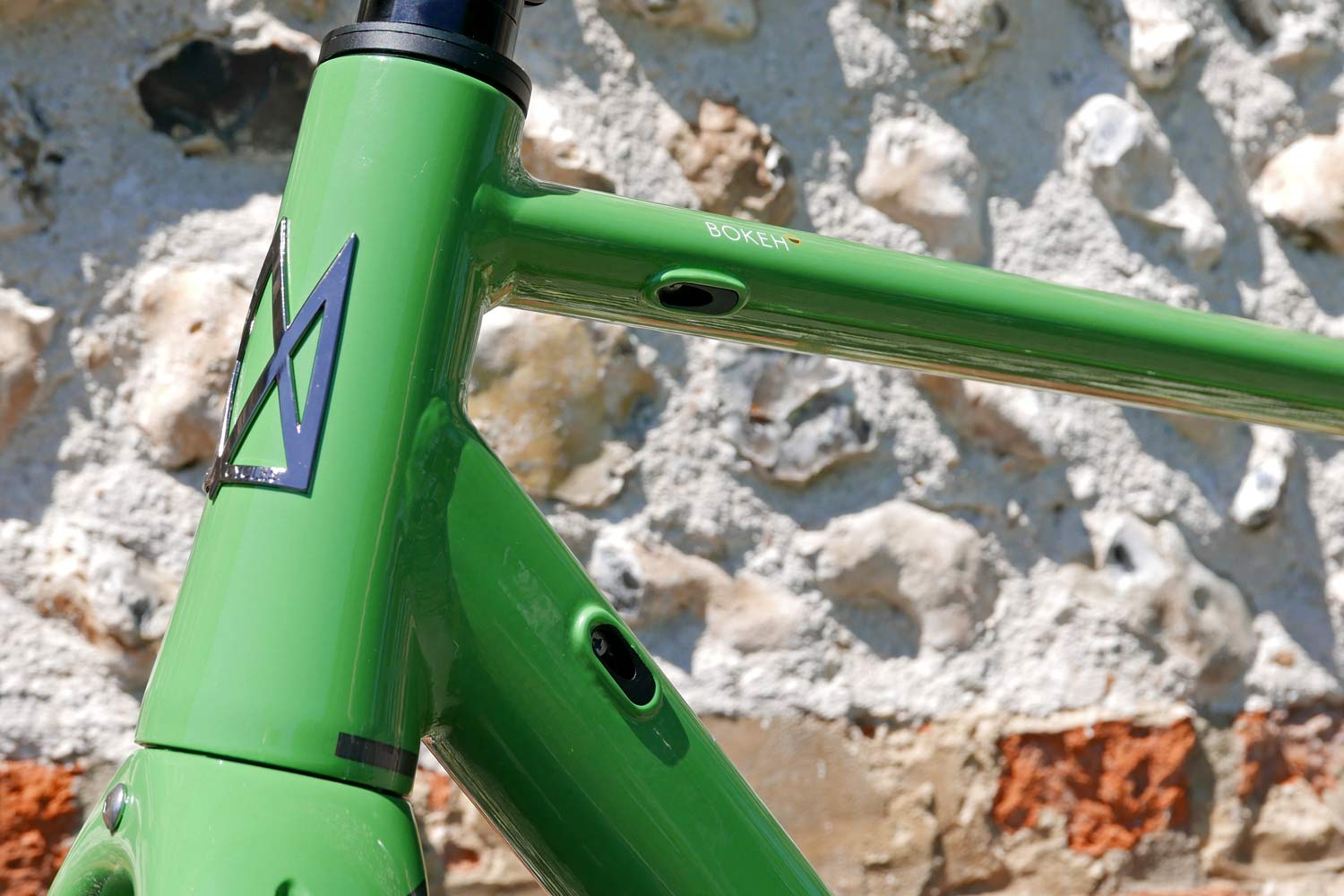 All of the updates to the new bike come directly from rider feedback, whether the in-house Mason team who rides these bike on the gravel roads that lead directly out of the farm where they are located in the South Downs of England (including ultra-endurance rider Josh Ibbet), or just customer feedback.

A subtle improvement is new modular cable routing ports that move out of the way to offer cleaner routing when using bikepacking framebags, together with bento toptube bags, with the added benefit of slightly smoother cable operation. The chainstay brake hose exit was also tweaked for straighter hose runs to modern flat mount brake calipers. 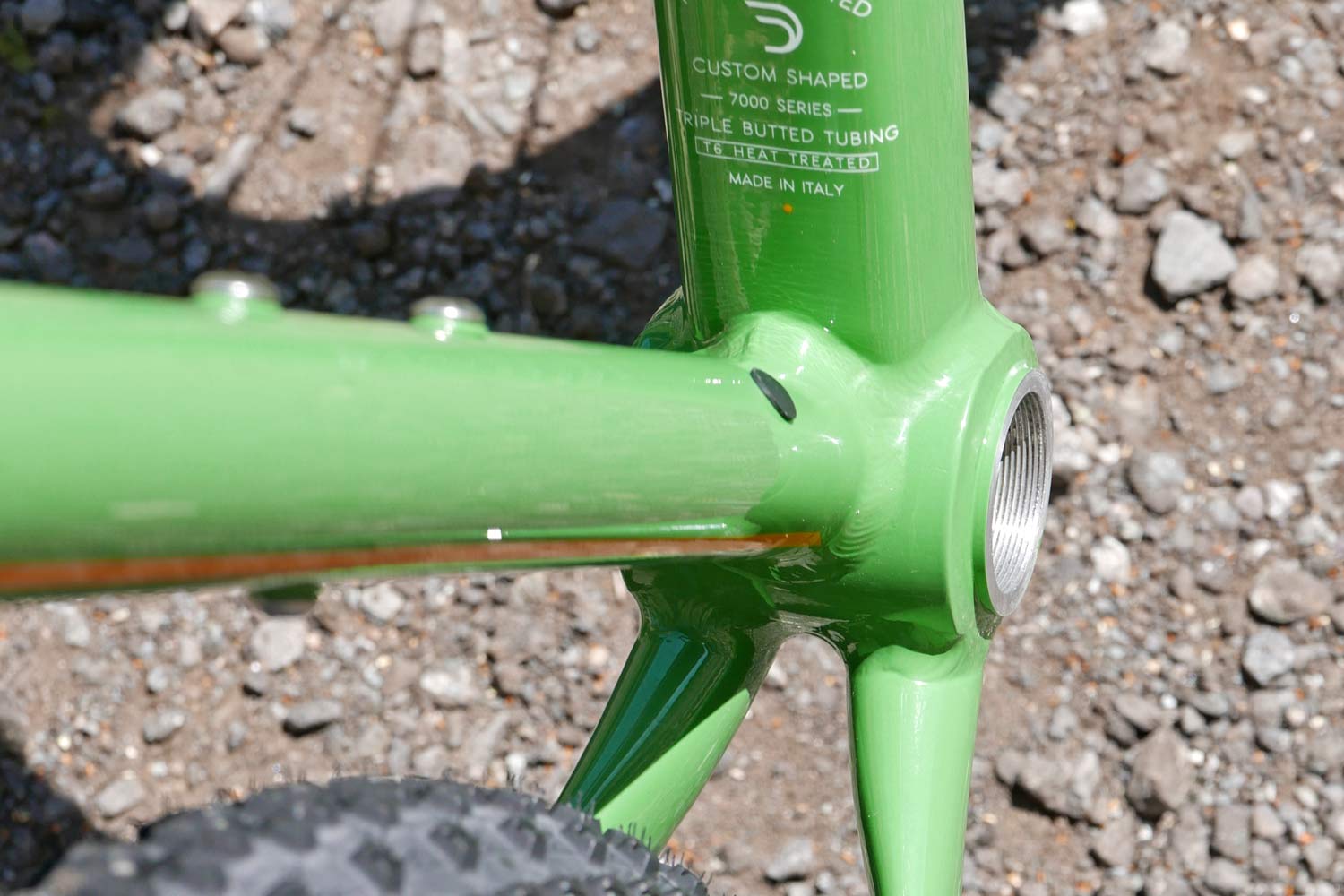 A part of the updates to the custom shaped & triple butted Dedacciai 7000 series tubeset is a new larger 56mm diameter oversized bottom bracket shell, which brings with it a number of improvements. It still uses a standard threaded BB, but offers better clearance inside. 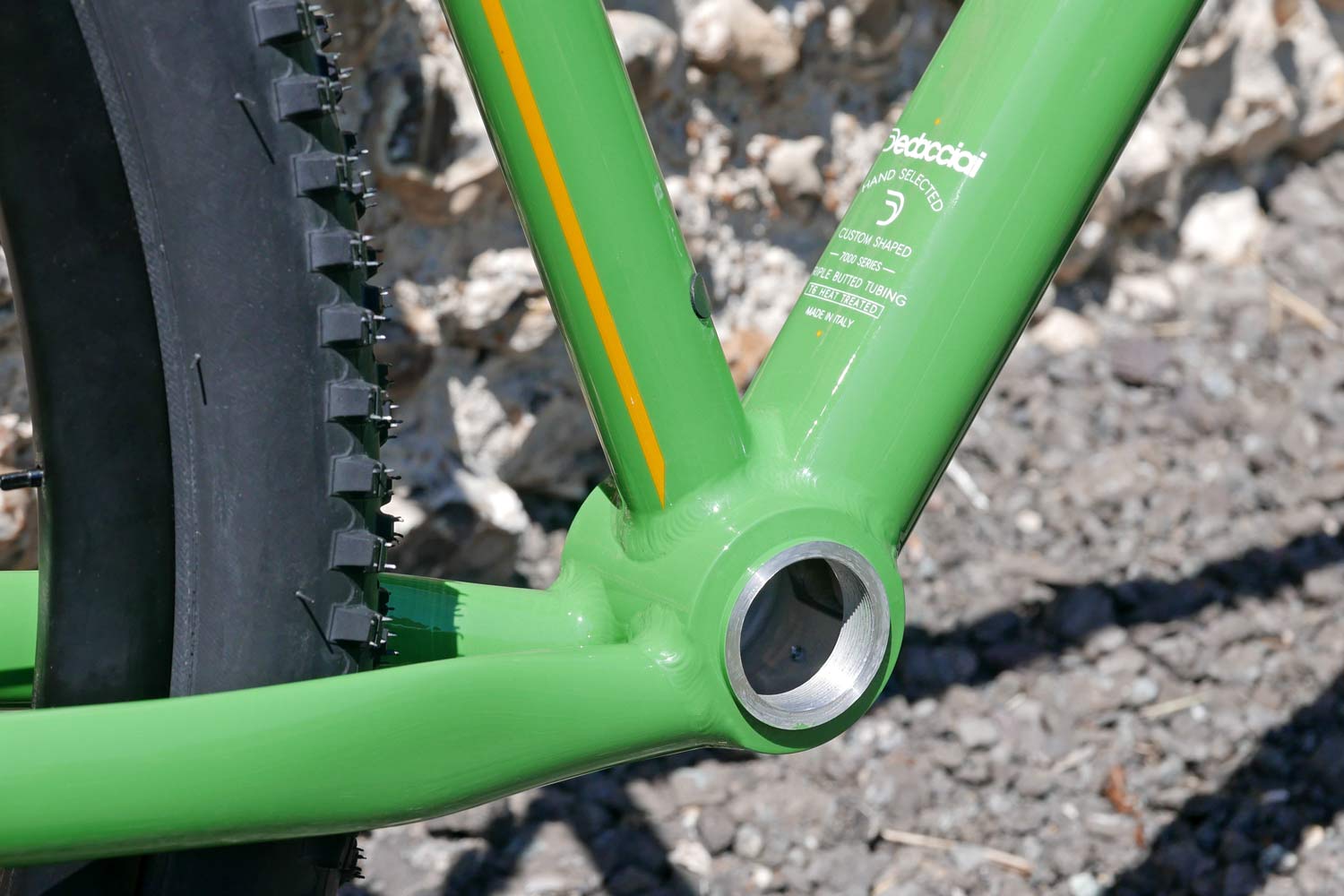 Hidden internally, the biggest functional improvement is that extra space around large 30mm diameter BB axles, so the brake hose can run completely internally without hitting the spinning axle. 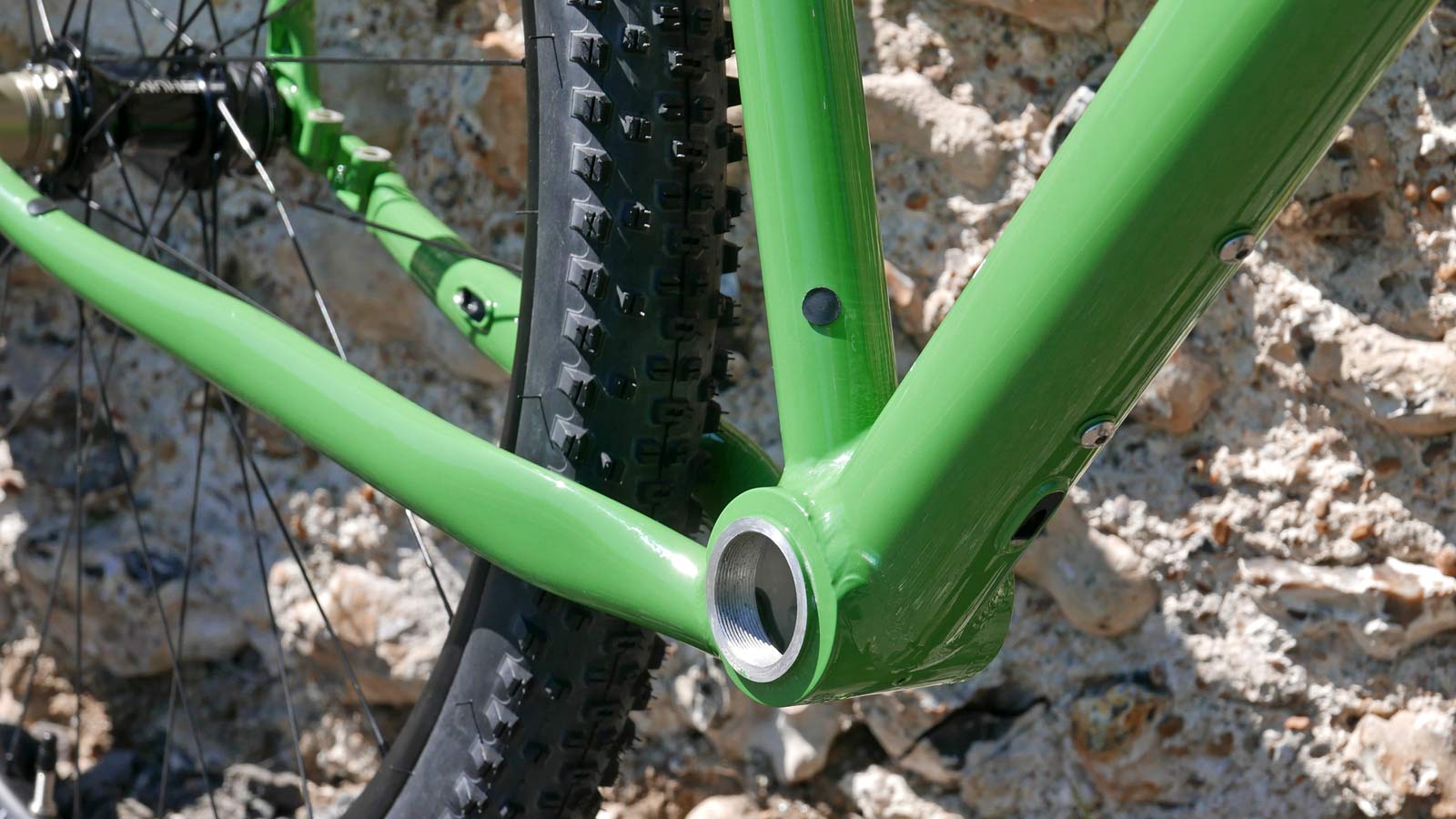 All that extra BB real estate also allows Mason to weld the chainstays on lower (& wider). That smooths out internal routing for mechanical shift setups, but also means a stiffer bottom bracket and some extra room for tires. 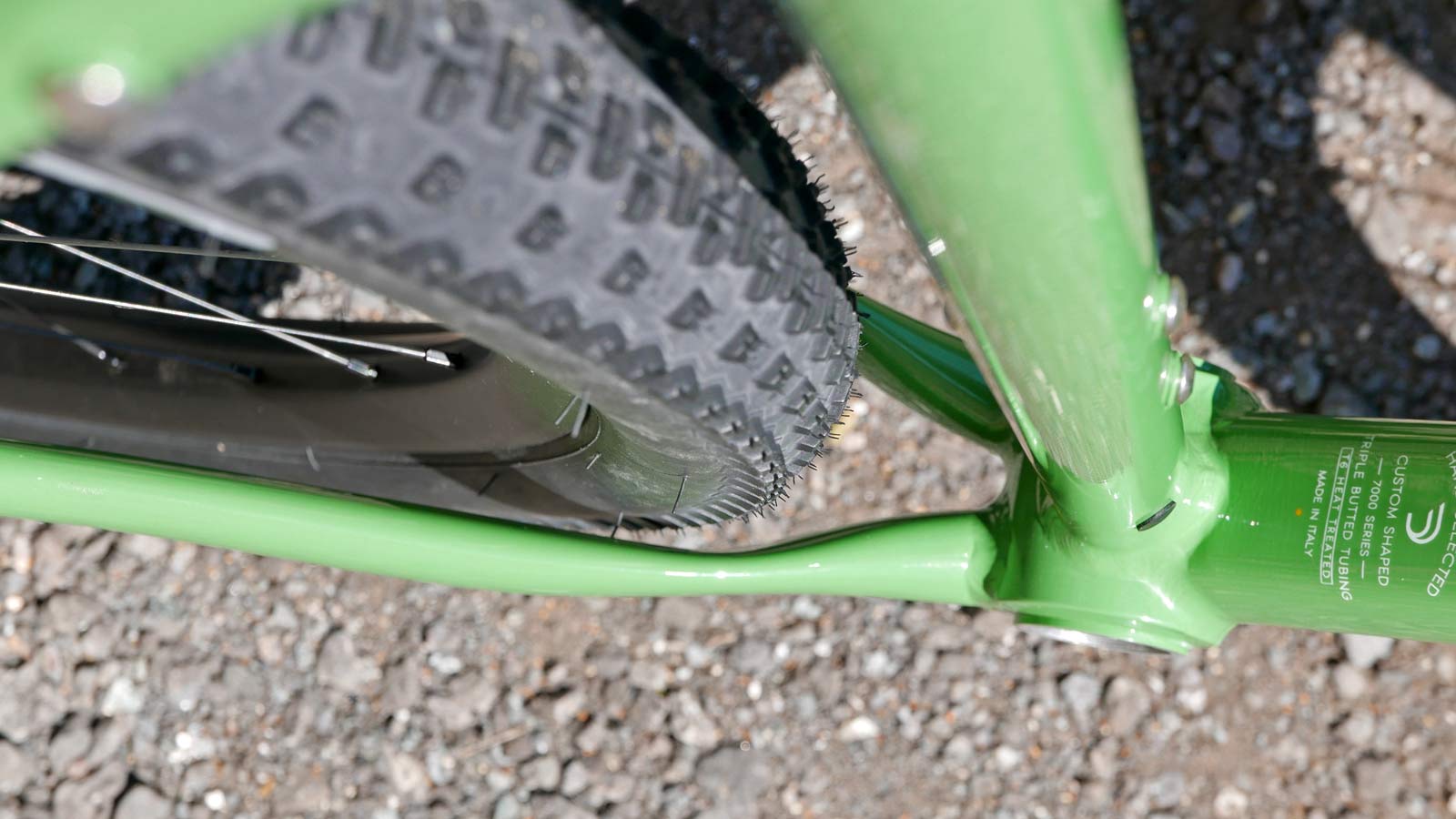 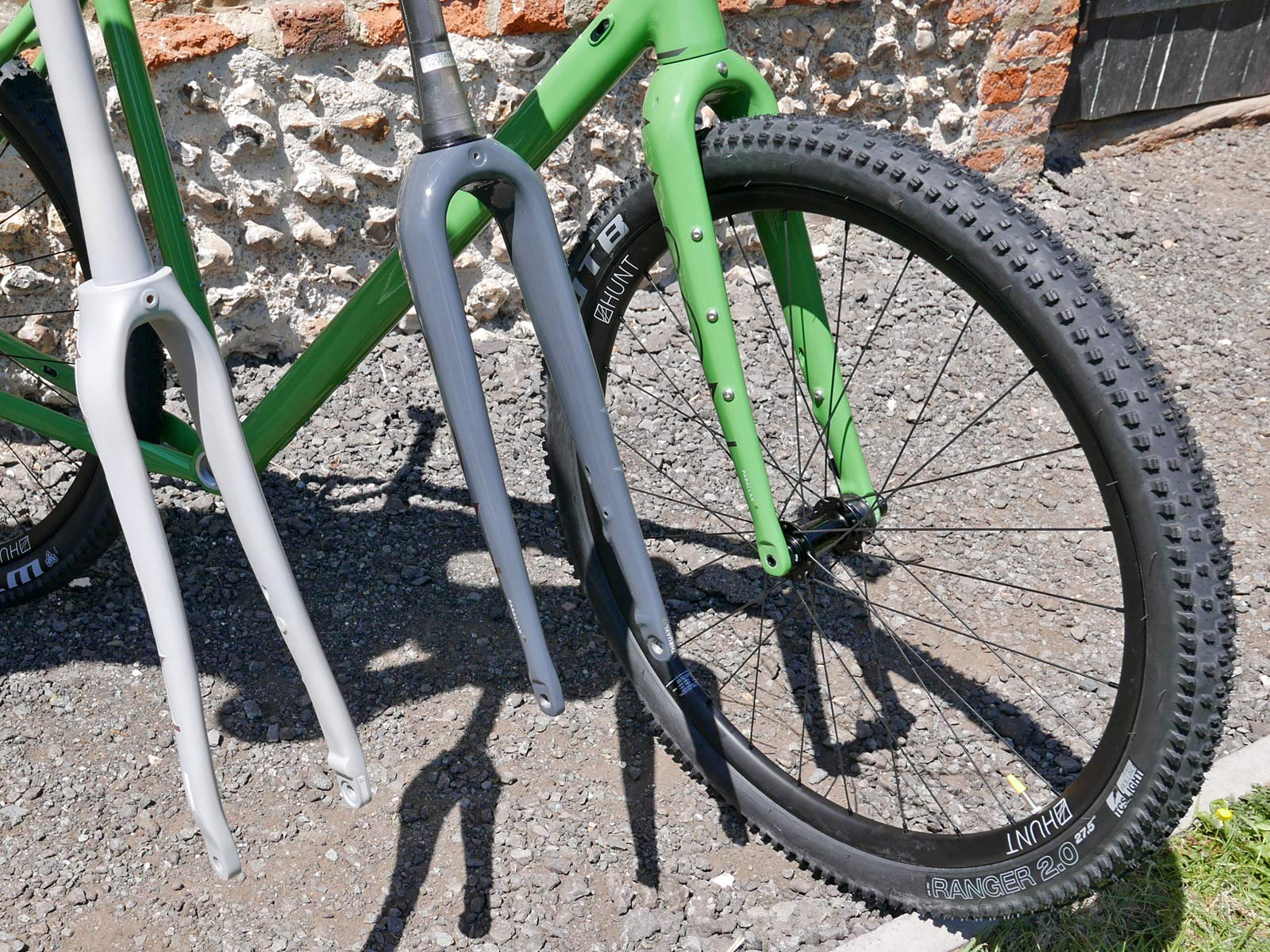 The new Parallax2 fork is probably the biggest overall change for the new Bokeh. The new fork carries over plenty of room for 650b x 2.1″ tires (or 700c x 45mm), flat mount disc brakes & a 12mm thru-axle from the original Parallax (dark gray above center. The light gray fork above left was an early prototype trying for a more road-evolved look, but didn’t offer enough clearance.) But now it adds a set of triple mount Anything cage bosses on the leading outer edge of each fork leg. Adventure riders need the ability to haul more water, so these slightly angled cage mounts offer much more carrying capacity to the bike, while keeping weight low & out of the way.

The new fork also includes a mount on the crown to set up a dynamo front light, and features internal routing for a dynamo wire, in addition to the internal brake line routing in the opposite leg. It also gets more durable hidden fender eyelets to withstand more off-road abuse. The new full carbon Parallax2 fork has a claimed weight of 465g.

As of now the titanium Bokeh still comes with the first generation Parallax fork, but we expect that will get updated soon as well. 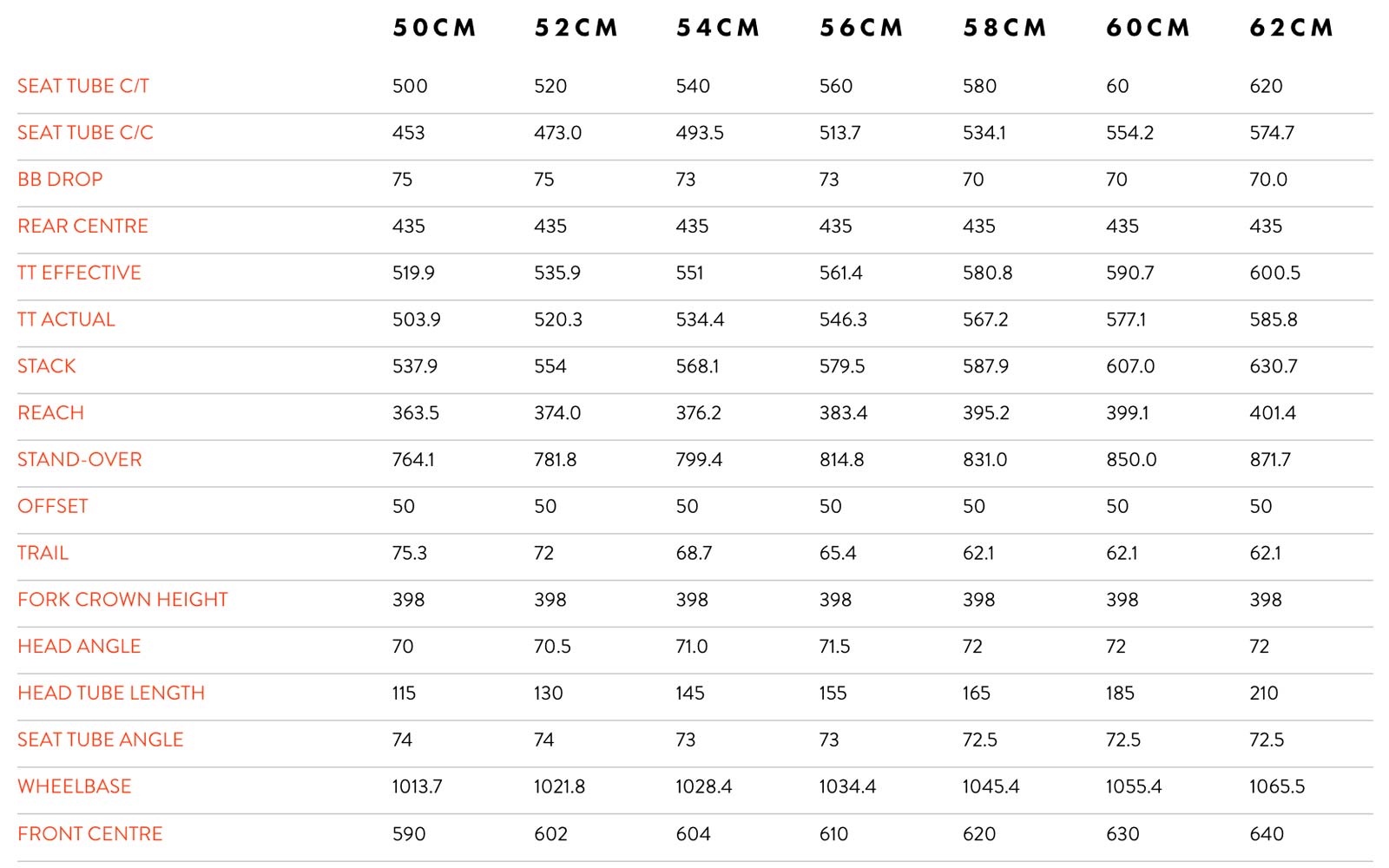 The geometry of the new Bokeh remains for the most part unchanged from the original, with the exception that there is now a new larger size, a 62cm frame to fit larger riders. That bigger frame (like similar ones offered for the Resolution2 & Definition2) uses an oversized seattube for extra off-road-ready frame stiffness. 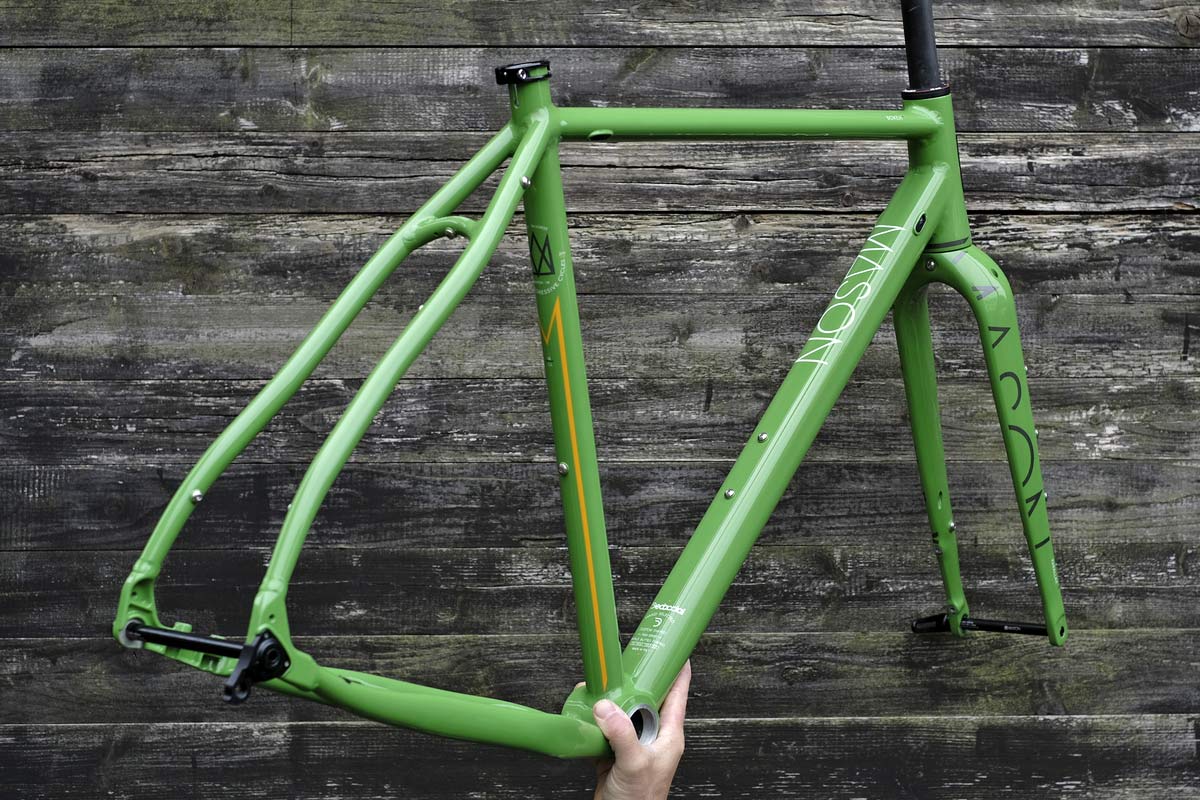 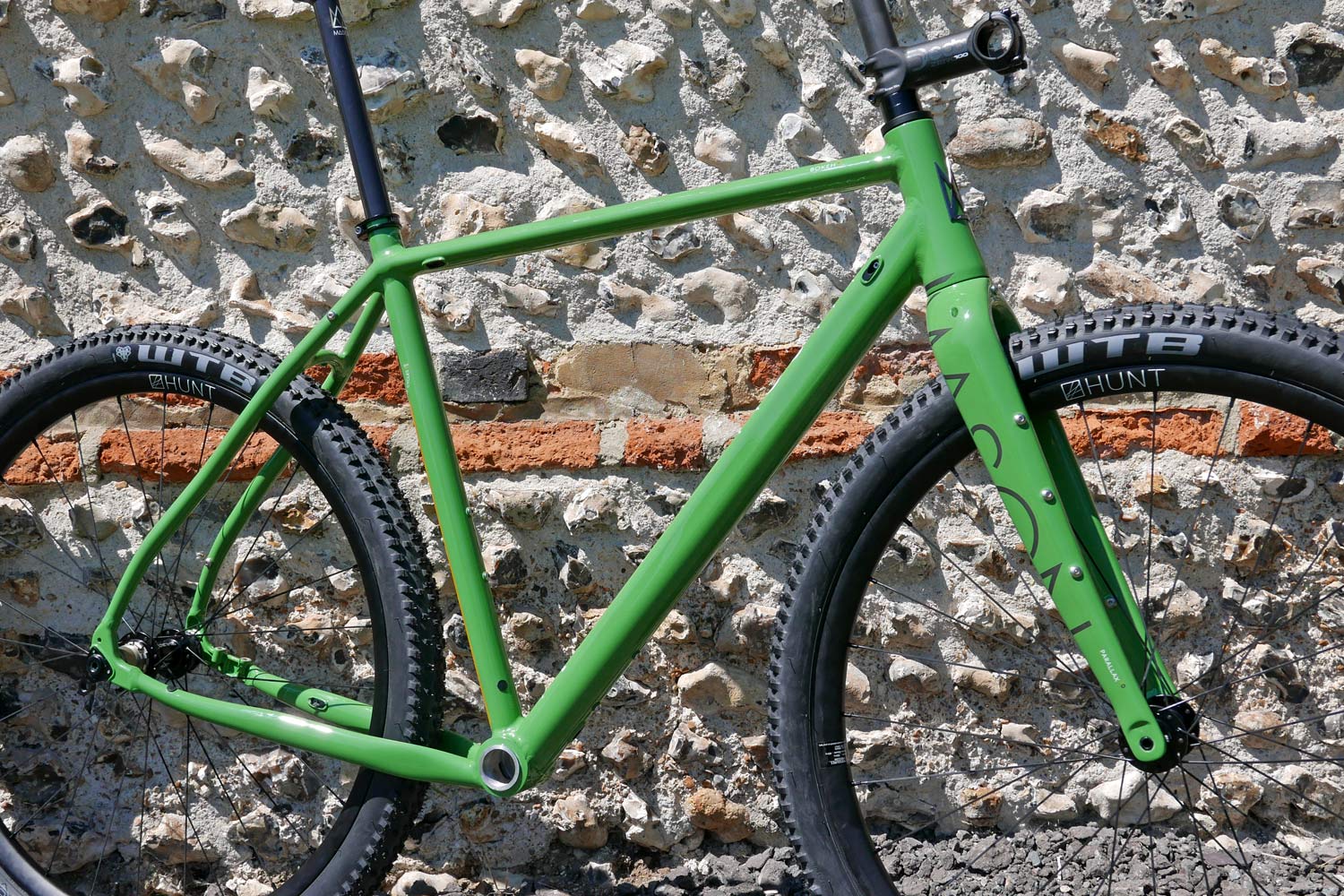 All new orders for Bokehs will automatically get all of these updates, whether in the standard gray or orange paint jobs, or this limited edition Filter Green. Some of those other colors may not be in stock for a week or two, but the green bikes are in stock and already available today.

With a set of “John Deere” stickers on the down tube (for tax purposes) – this would be a great addition to the farm equipment!

Very exciting. I have an orange one on order for delivery this month!

Any word on these forks being sold seperately? I’d love to upgrade my 2017 Bokeh.

That frame is crying out for T47.