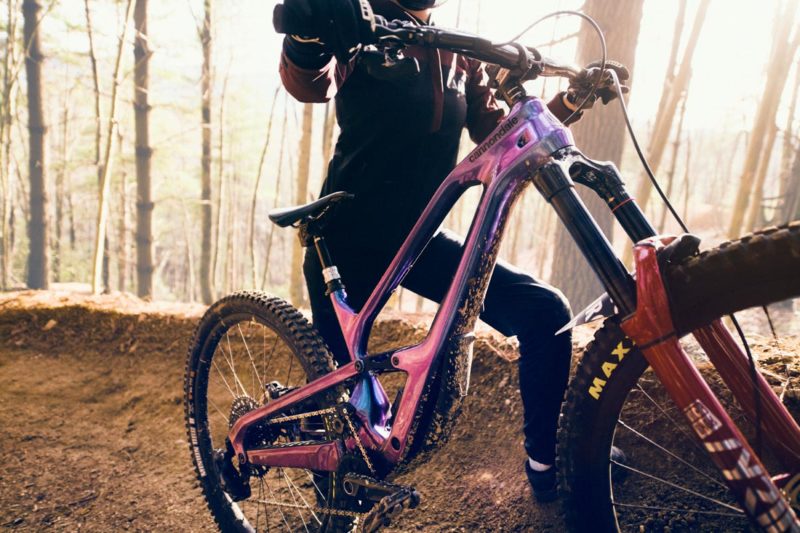 It’s hard to believe it’s already been four years since the Cannondale Jekyll had its last major face lift. The 2018 model was first launched only as a 170/165mm travel bike with 27.5″ wheel – it wasn’t until the 2019 model that the wheels got bigger (though the travel grew smaller). Looking ahead, the new Jekyll only runs on 29″ wheels and is back to those 170/165mm travel numbers. More importantly, everything has been changed with a new Proportional Response suspension design that promises better performance for every size. 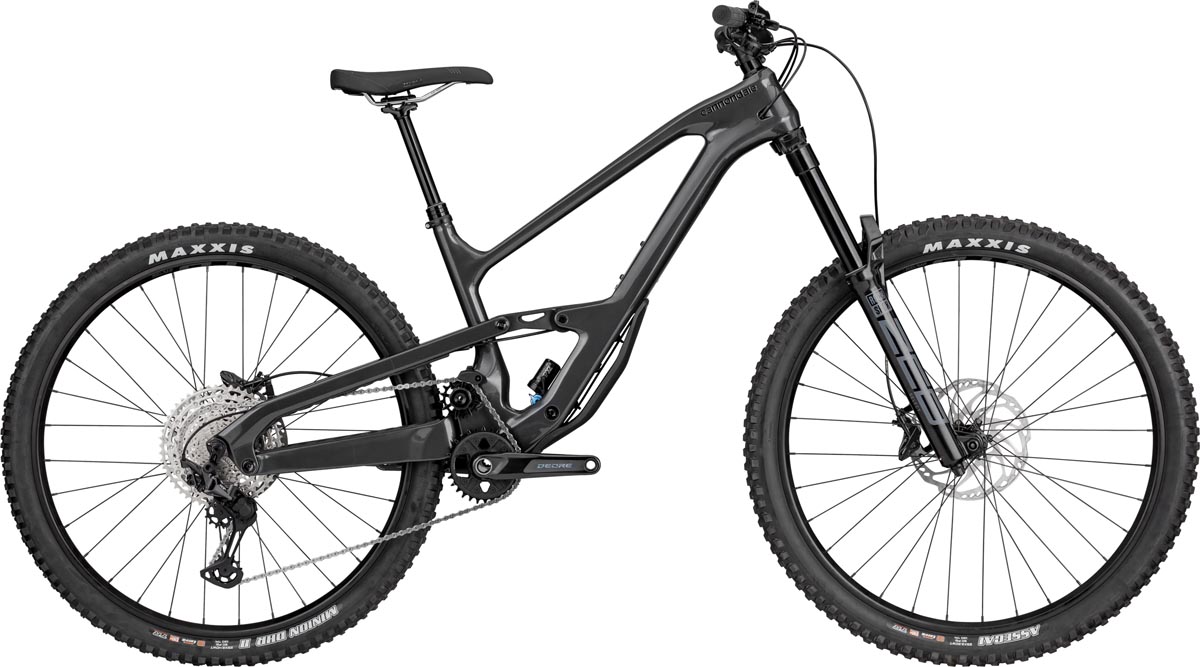 One look at the new Jekyll, and it’s clearly a different beast. It’s like Cannondale flipped the script with the old frame, taking everything suspension-related that was previously up high in the frame, and tucking it down as low as possible (with room for a water bottle up top). This gives the bike a much more low-slung appearance, though there’s a lot more going on than improved looks. 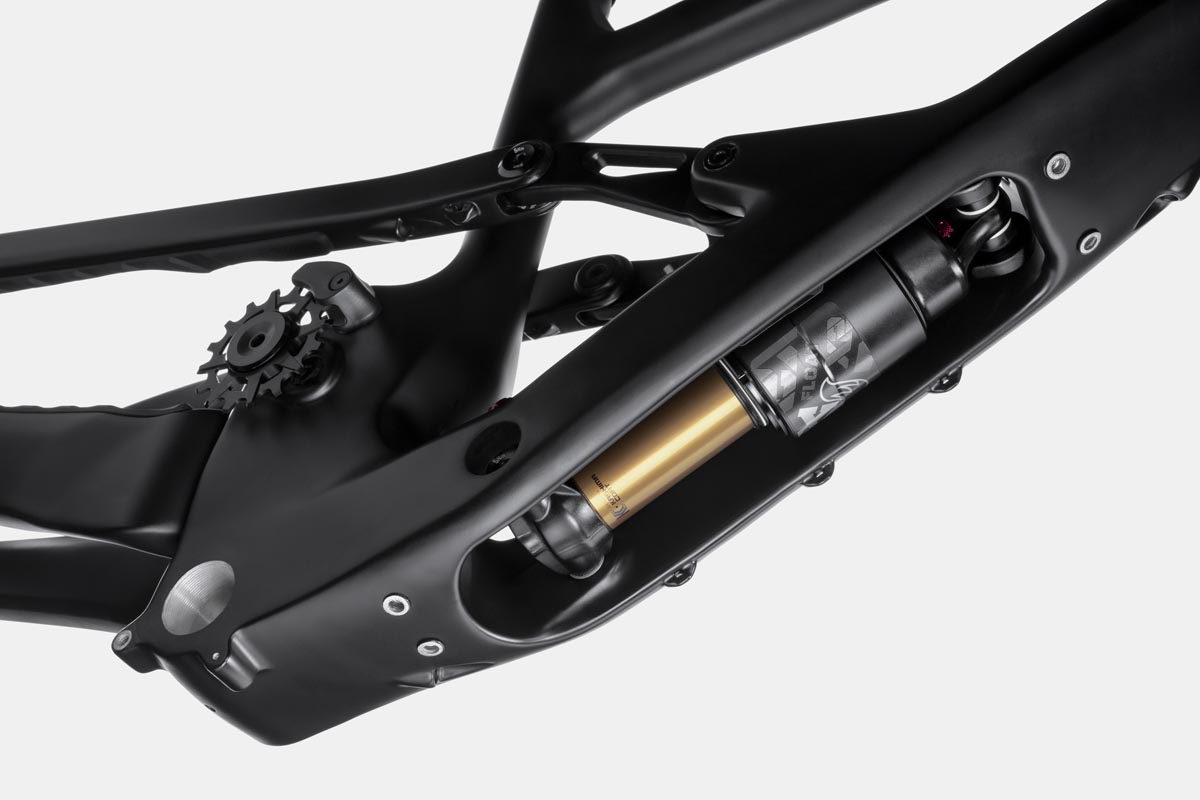 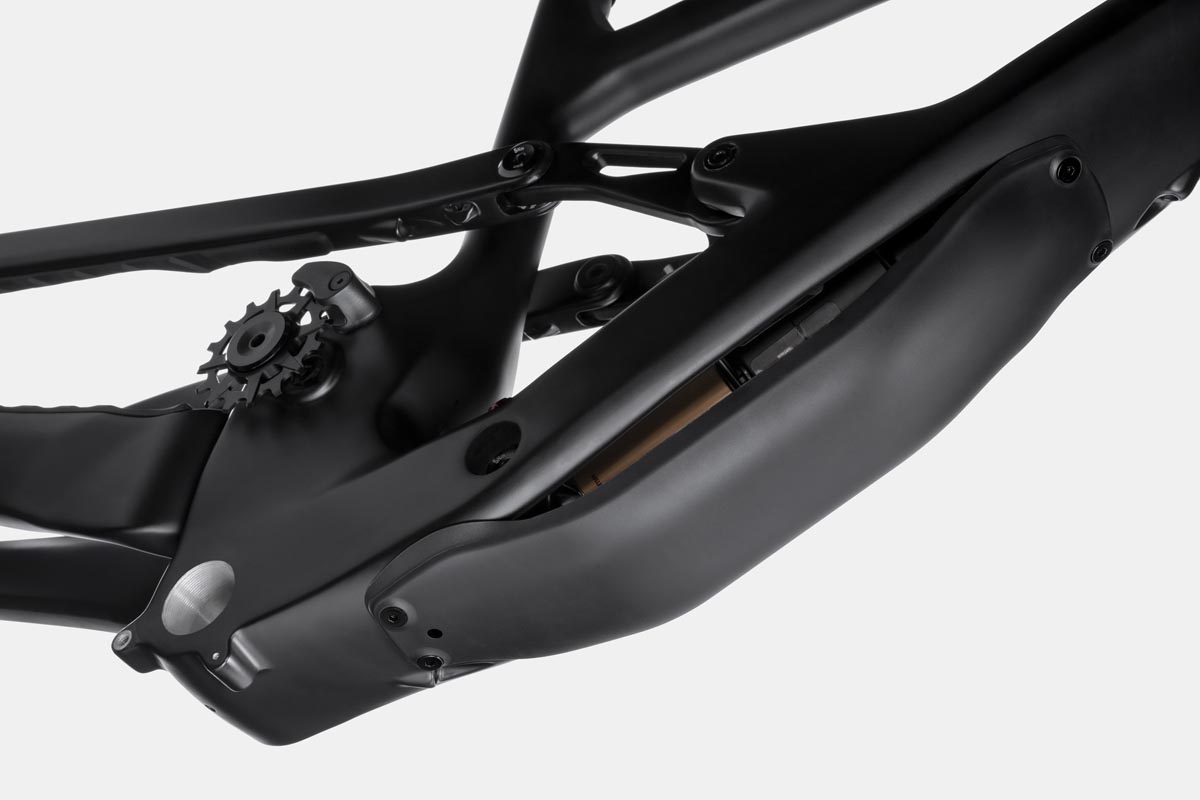 Where’s the shock? The piggyback reservoir gives it away, but most of the shock body is hidden inside the downtube between the two frame spars in the “gravity cavity”. When not being serviced, the Gravity Cavity has a cover that doubles as a frame protector. The guard is open on the sides to prevent any build up of water and mud on the shock, and also allows air in for shock cooling. 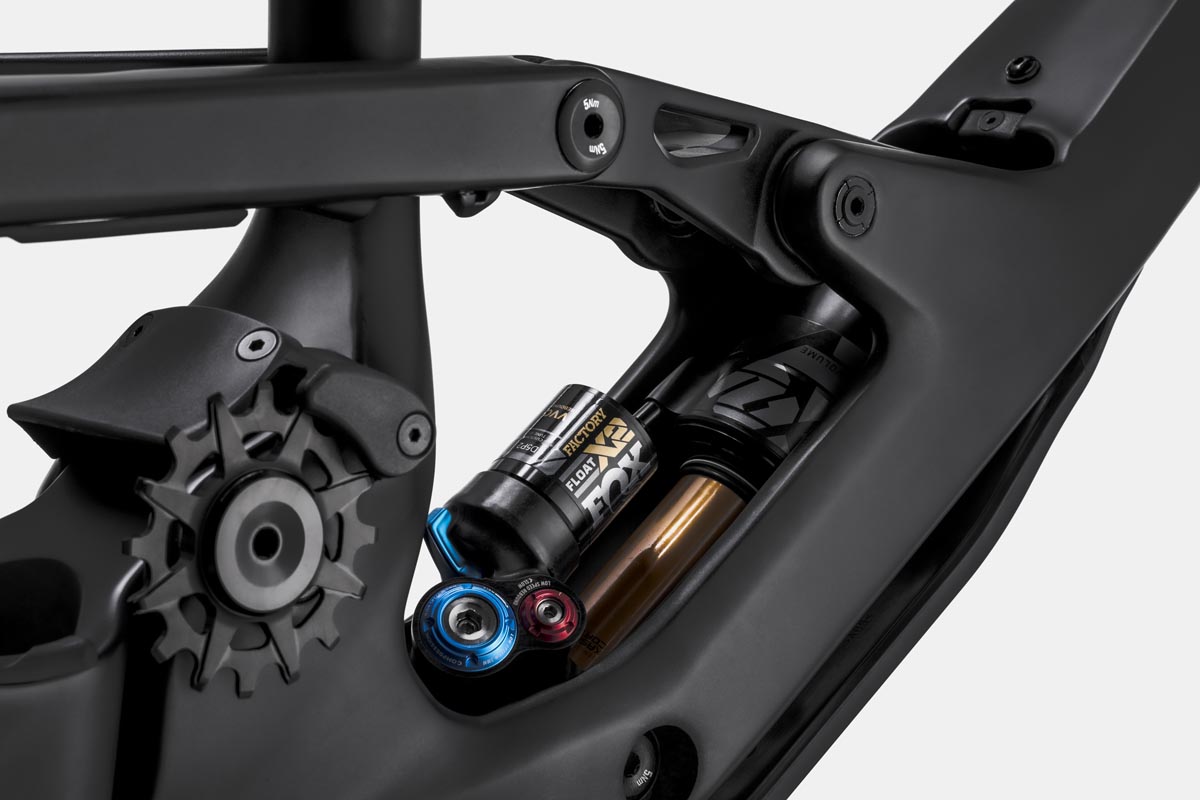 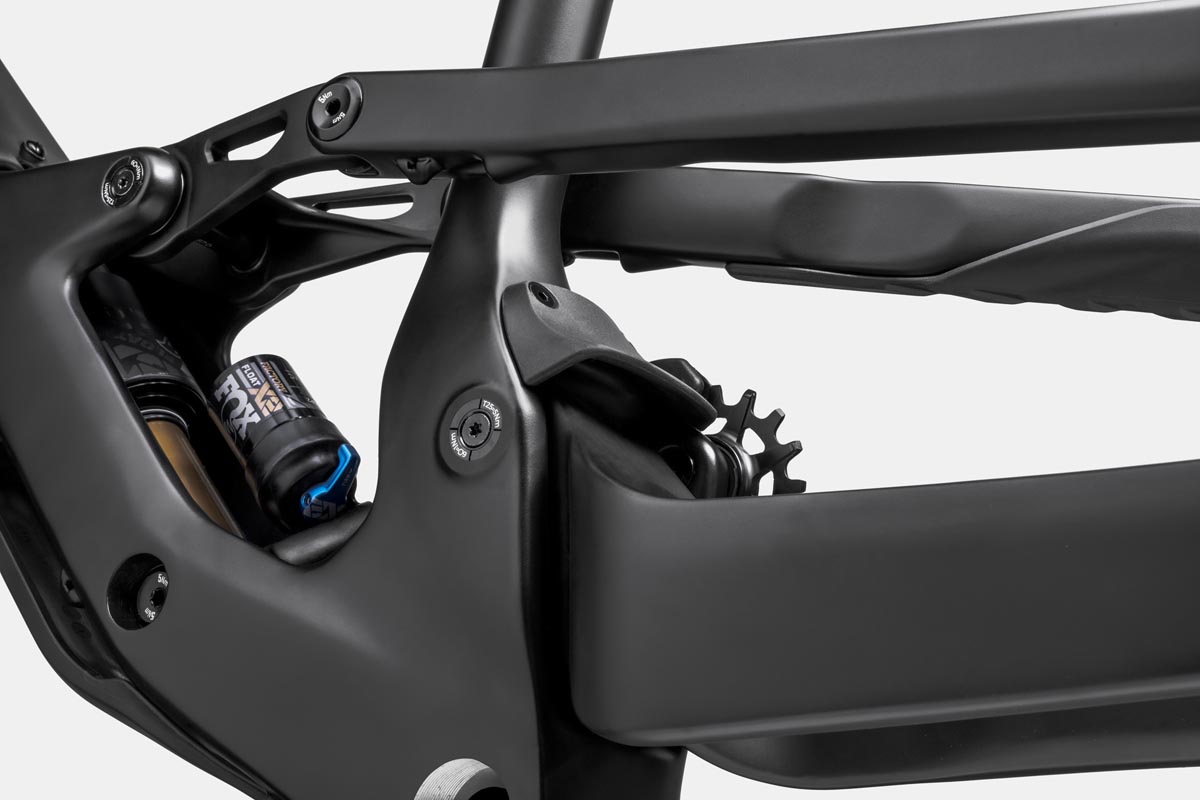 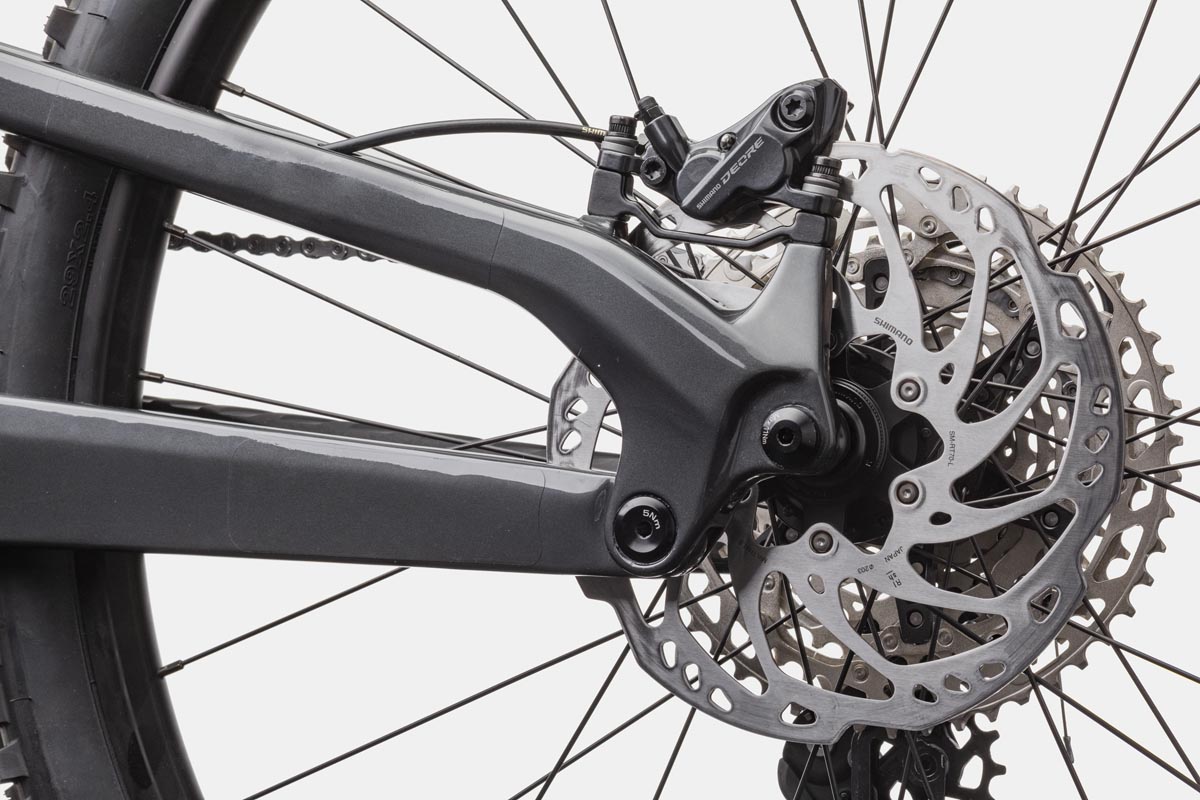 That hidden shock is driven by a 4-bar Horst Link suspension linkage with a high main pivot to provide a rearward axle path. We’ve seen a lot of bikes go this route lately – and for good reason. The rearward axle path allows the wheel to ‘get out of the way’ as the suspension is tracking over the bump, which prevents the bump from slowing you down as much.

Why don’t more bikes use rearward axle paths and high pivots? Well, most end up transmitting unwanted feedback to your pedals in the form of pedal kickback. So we’ve also seen a rise in the use of idler pulleys to remedy that, or in this case… 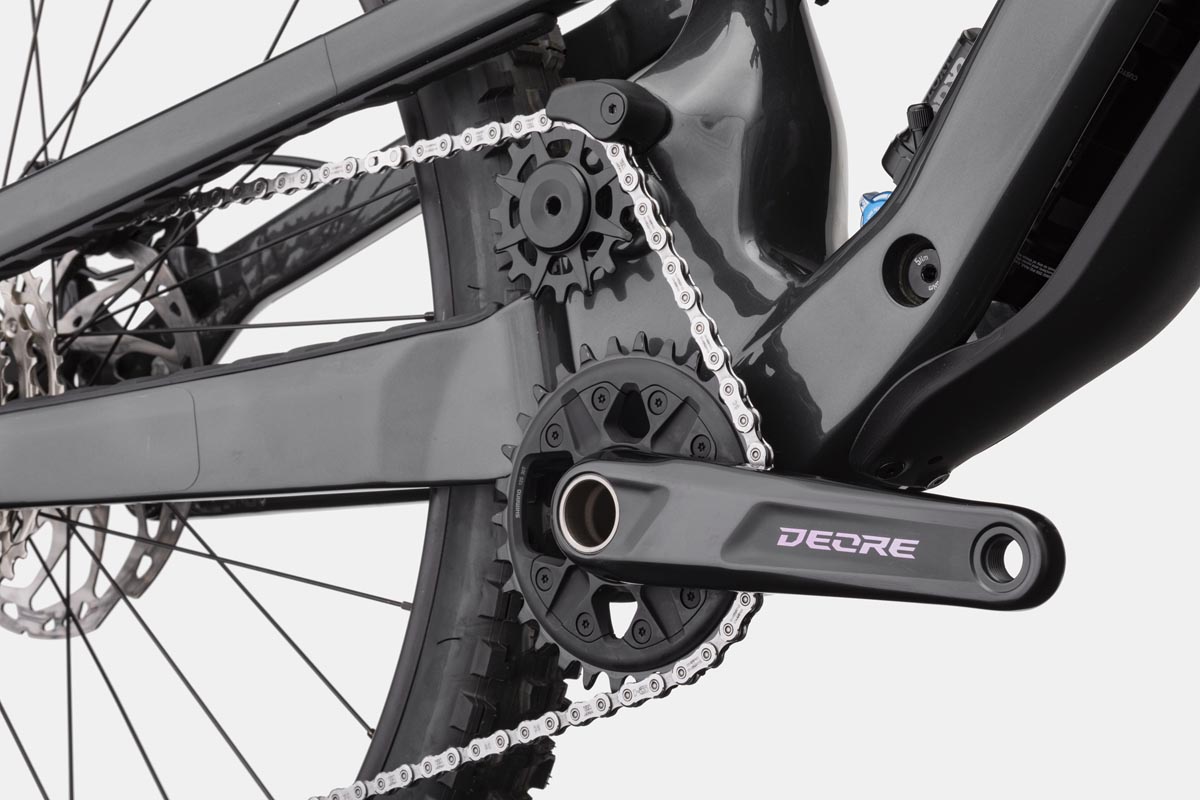 If you look closely at the graphs above, those aren’t comparisons of different bike models. Instead, those graphs are showing the differences in how each frame size of the new Jekyll performs. This is what Cannondale refers to as their Proportional Response Suspension, or essentially, a size specific suspension kinematic.

Cannondale claims that as riders grow in size, their center of gravity changes. That in turn has an effect on how the bike’s suspension functions, so the kinematic needs to be built with that in mind. They claim that most bikes are built with a single rider center of gravity in mind, and that unless you’re in that sweet spot, you’ll end up on a bike with compromises for the suspension kinematic. We really don’t know how many other manufacturers might be building full suspension bikes in a similar manner, but it’s interesting that Cannondale calls it out here. 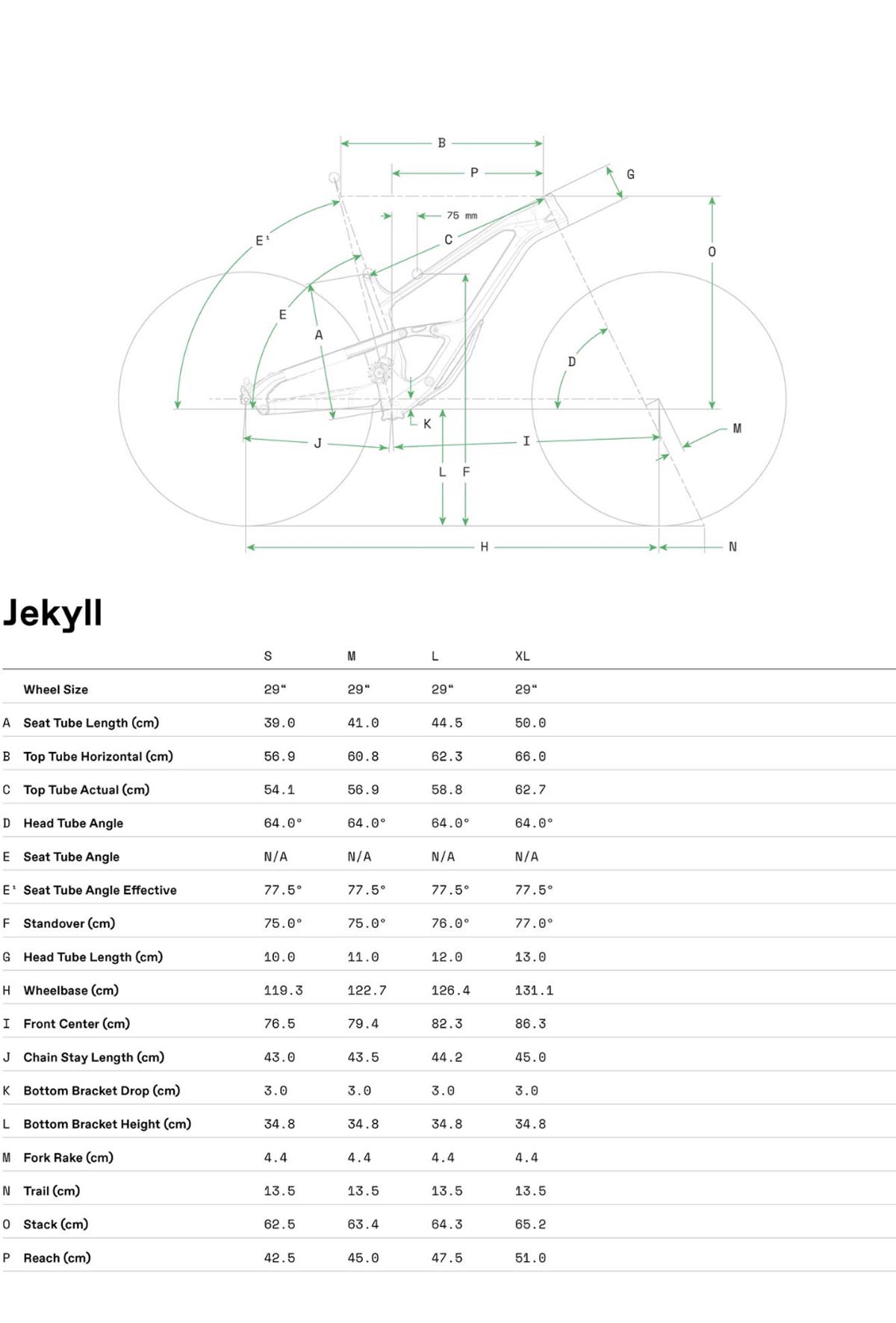 Along with that size-specific suspension, you also get size specific geometry details like the chainstay length which grows from 430-450mm, depending on the size. All sizes run a 64° head tube angle, and an effective 77.5° seat tube angle. 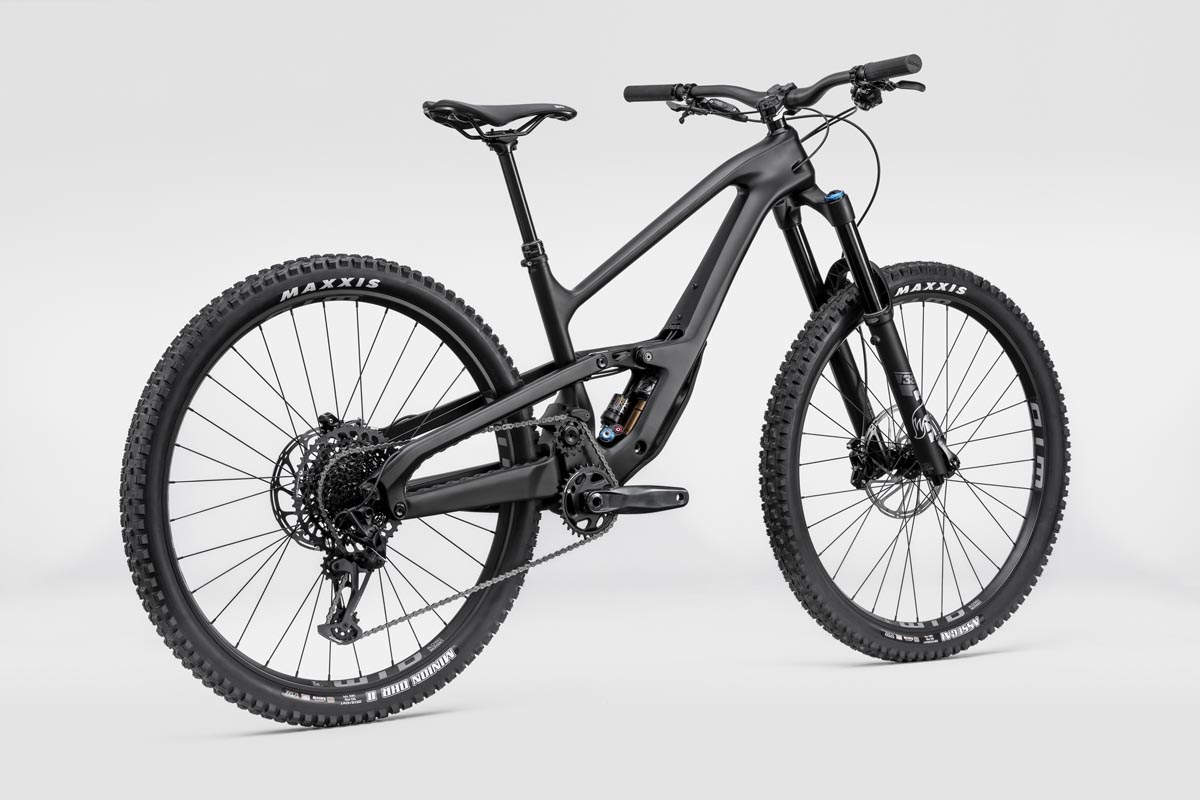 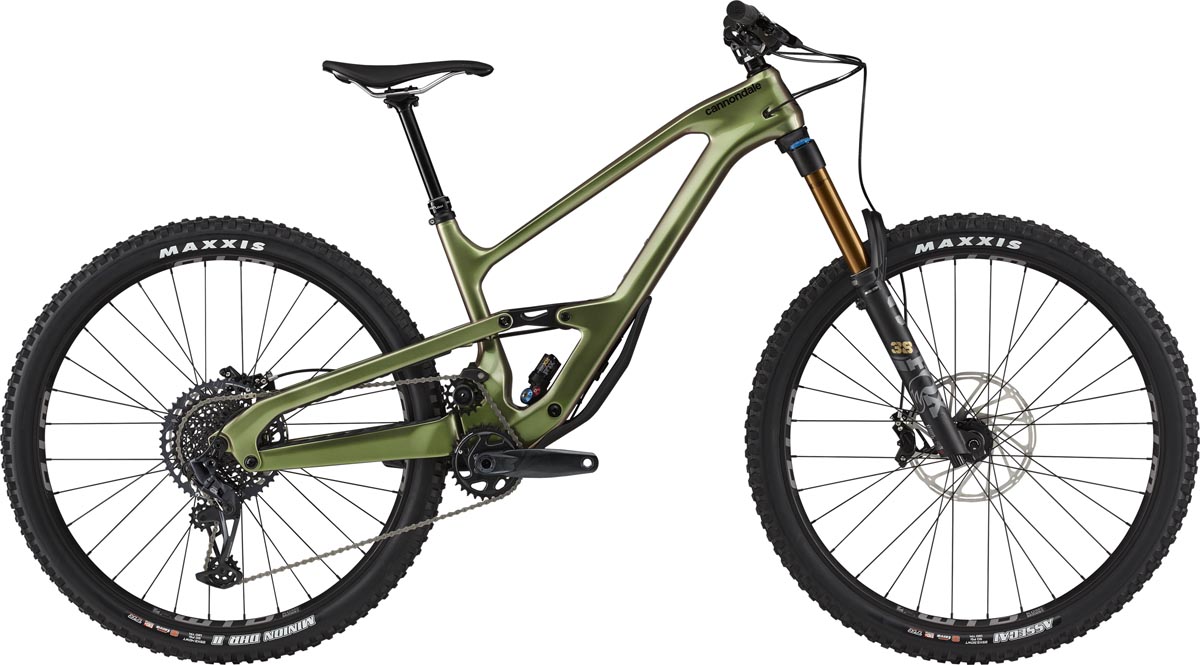 Offered in just two builds, there will be a Jekyll 1 and Jekyll 2. The Jekyll 1 is priced at $6,100 and includes the Fox Float Factory 38 fork, Float Factory X2 rear shock, an SRAM GX/X1 Eagle 1×12 drivetrain, Code RSC hydraulic disc brakes with a 220/200mm rotor set up, and a few higher end parts like their HollowGram SAVE carbon riser bar. 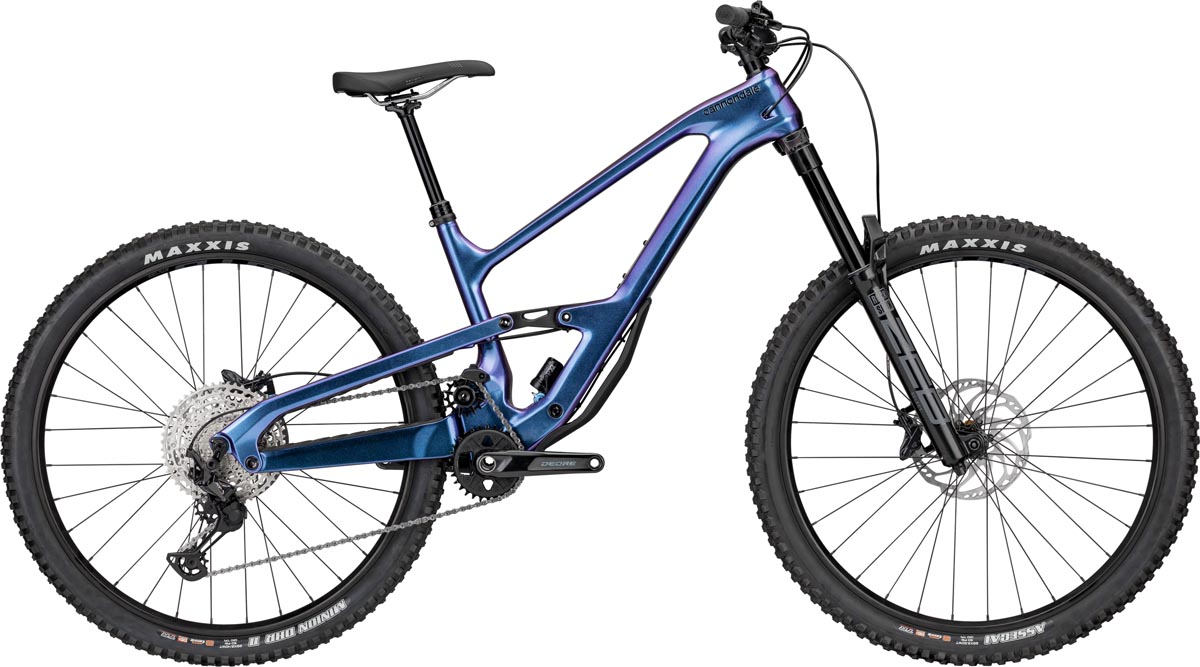 The Jekyll 2 on the other hand is priced lower at $4,400. That build will include a RockShox Zeb Select fork with Fox Float DPX2 Performance rear shock, a Shimano Deore 1×12 drivetrain with Deore M6120 hydraulic disc brakes with 203mm rotors, and a few more affordable parts like WTB STX I30 TCS rims to keep the price down. 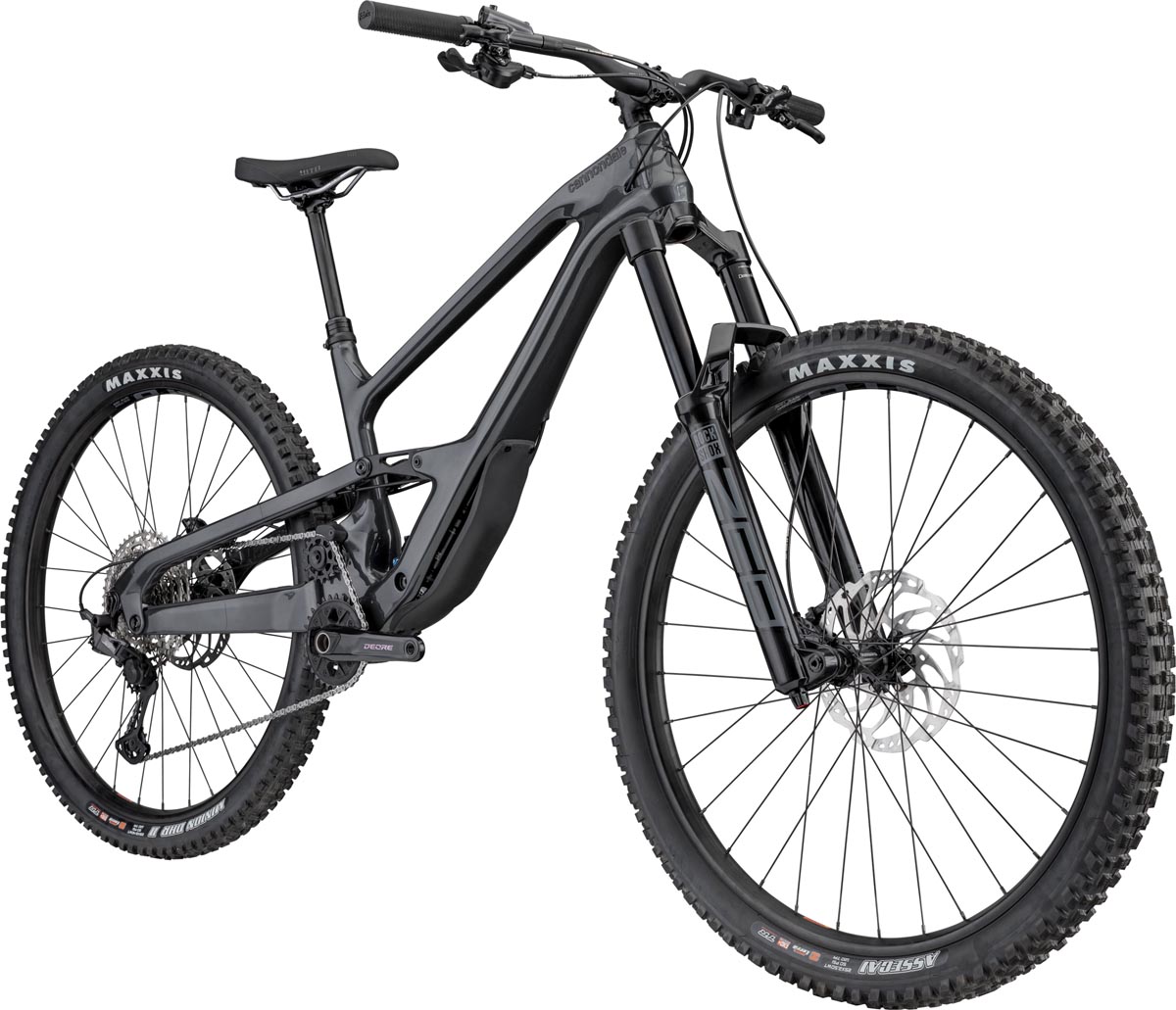 Both bikes will also be offered in the ‘Graphite’ colorway shown above in addition to the model-specific colors shown above.

Cannondale expects these bikes to start arriving by late summer to fall 2021, so you may actually be able to get your hands on one before the new year. Maybe.

I’m sure it rides great, but that is a mud basket, I like Scott’s solution better.

Great to see the chainstays get proper longer with frame size. However the offset rear hub puts me off.

Hmmm… the standover is measured in degrees…?