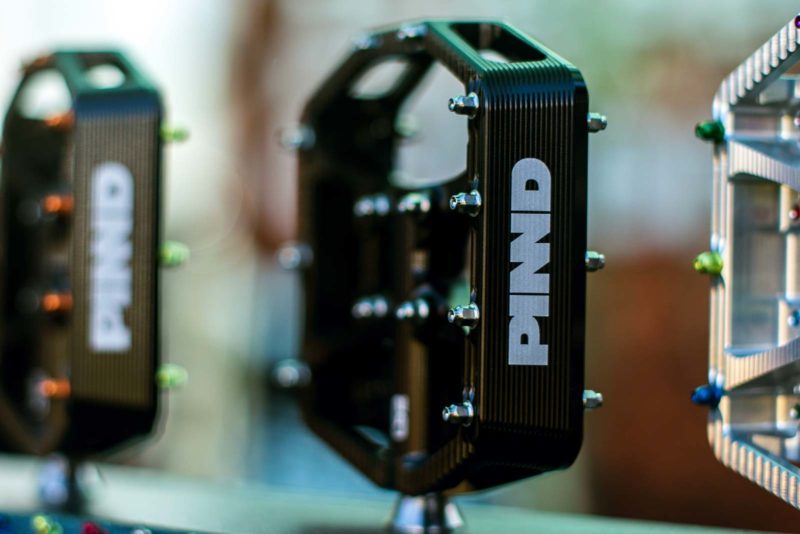 PINND are a new Scottish componentry brand, launching with the CS2 Flat Pedal. Intended for downhill, enduro and e-MTB, we got eyes on the final production version of the PINND CS2 Pedals at the EWS, Tweed Valley. With a 5 year warranty period, PINND have focused on the pedal’s strength and longevity, using oil sealed internals with a high-end titanium axle running on a needle bearing in addition to two cartridge bearings. After having spent several weeks testing an earlier prototype, we were keen to see the finished product. 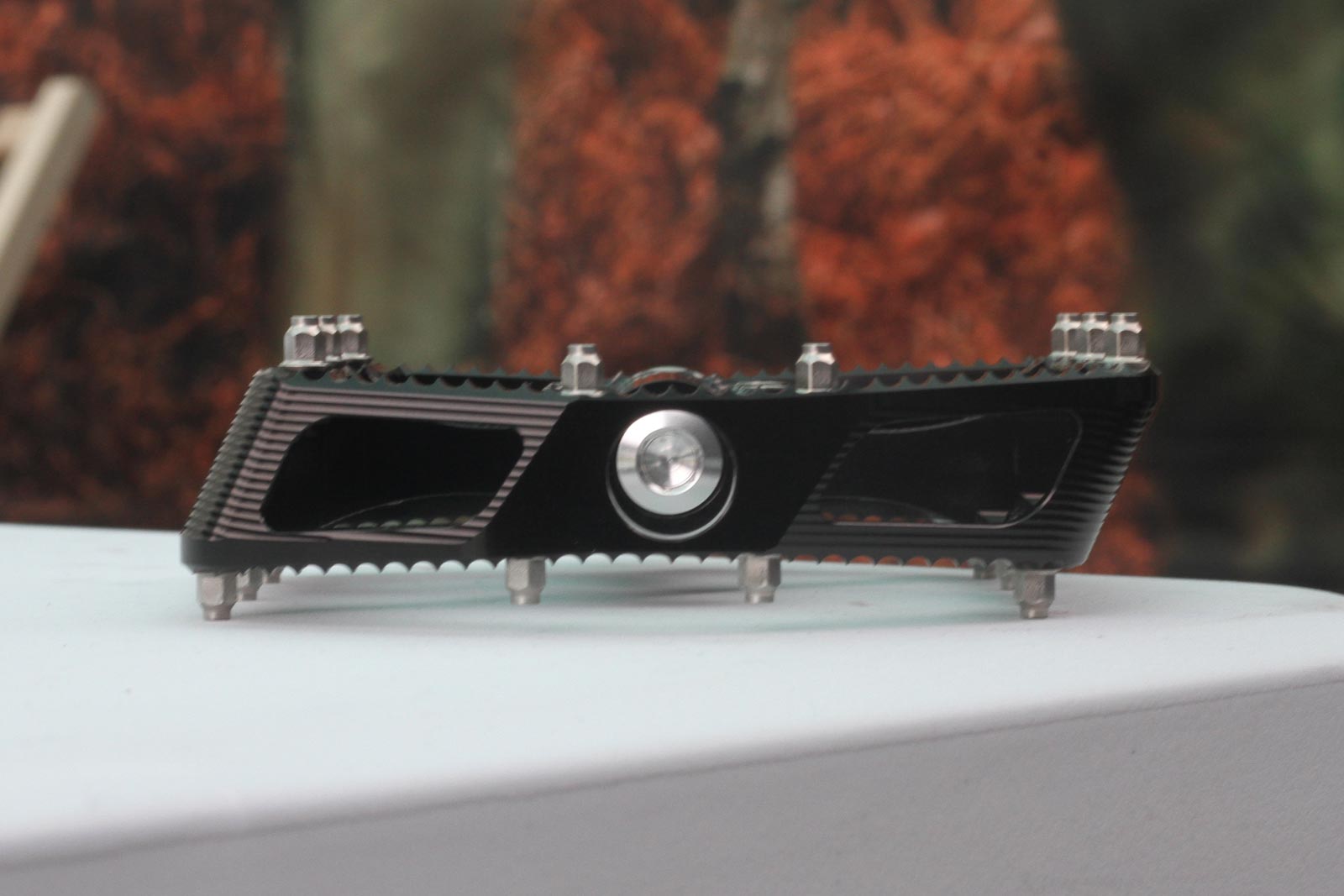 The PINND CS2 Flat Pedal is a 110 x 105mm platform, CNC-machined from 7075 T6 Anodized Aluminium. With a 22.5mm thick body, these are some seriously chunky pedals. Add the 5mm pins at each side and you’ve got a pedal that’s 32.5mm thick. That’s measured at the front and rear edges, though. The pedal body is thinner around the central region, at 18mm, giving rise to a 4.5mm concavity, front to rear. 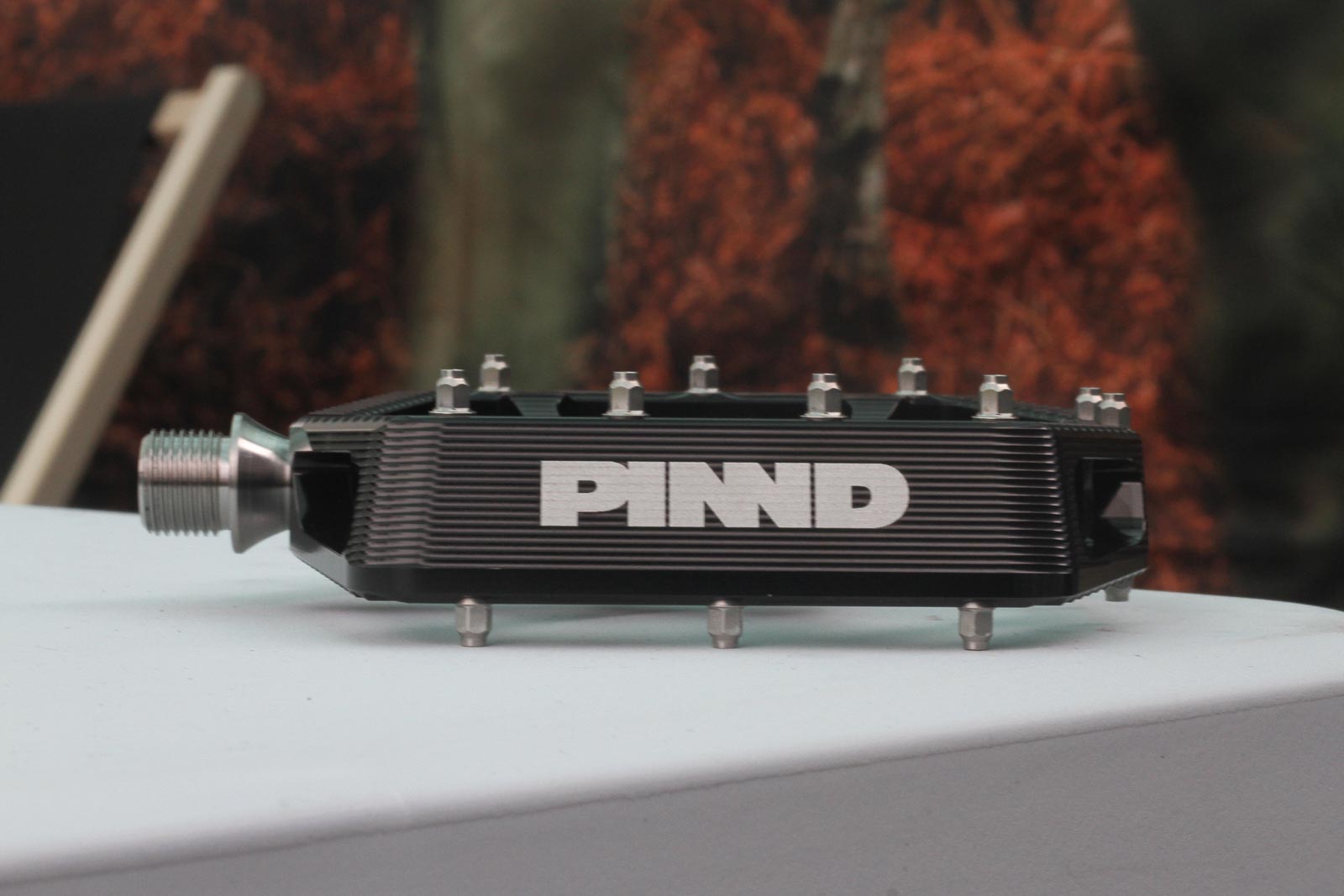 The CS2 Pedal ships with 18 pins installed (9 on each side), though they can take a maximum of 26 (13 per side). Jamie, founder of PINND, tells us that many of their riders prefer to run just 9 per side, removing the four centrally located pins, leaving the pedal with a much more pronounced concavity. 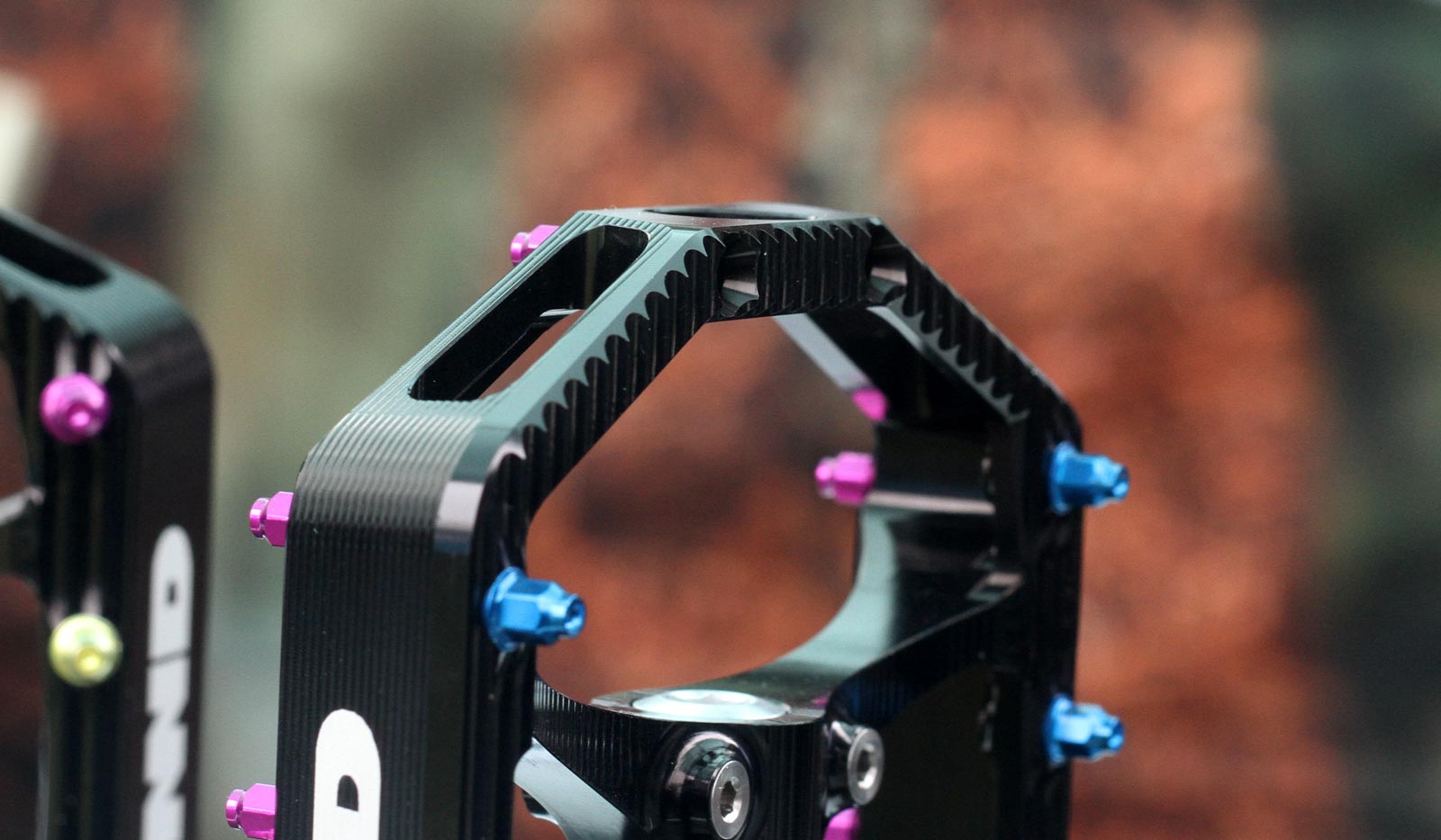 The stainless steel pins themselves are 5mm tall, round at the tip where they’ll interface with the shoe sole. Since the original prototype, PINND have update the shape of these pins to prevent them from shearing off so easily upon rock strikes. The niche they sit within on the pedal body now has a conical shape leading down to the threaded portion, with the pin stem featuring a complementary cone shape. As a result, the surface area here is greater, leaving the pins stronger and more resilient to impacts.

Internally, the PINND CS2 pedal runs on a Grade 5 Titanium axle, with two cartridge bearings and a needle bearing. The latter replaces the plastic bush used in the original prototype, and forced the brand to make the pedal body 2mm thicker. They were happy to make this compromise due to the benefits a needle bearing offered. 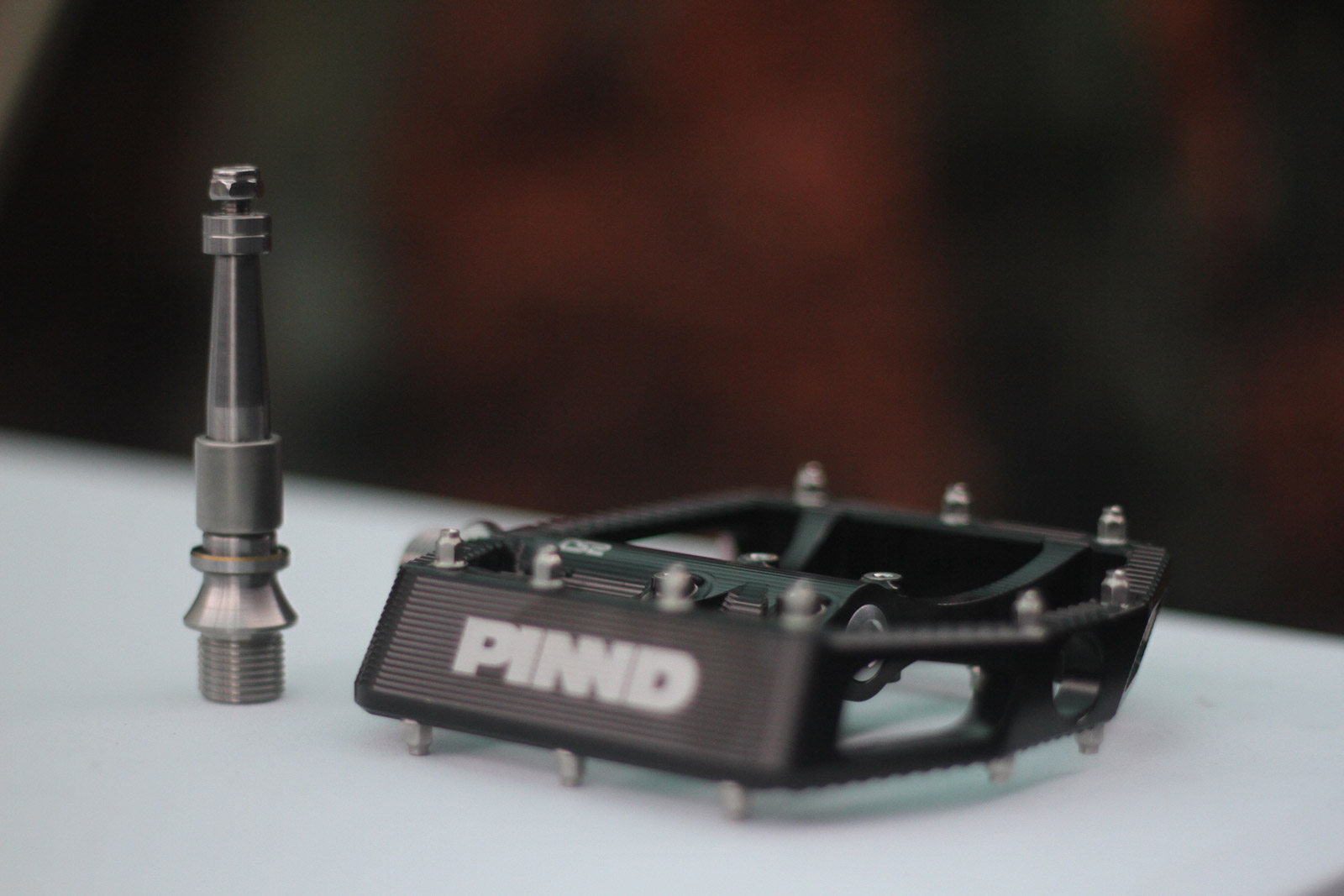 A pair weighs a claimed 420g with stainless steel pins, 395g with Ti pins, and 385g with aluminium pins. Riders who are sick to the back teeth of being over the weight limit for most componentry will be pleased to hear that the PINND CS2 Pedals have no rider weight limit.

The new PINND CS2 flat pedals for mountain biking retail at £195 per pair, and are available now direct from PINND. 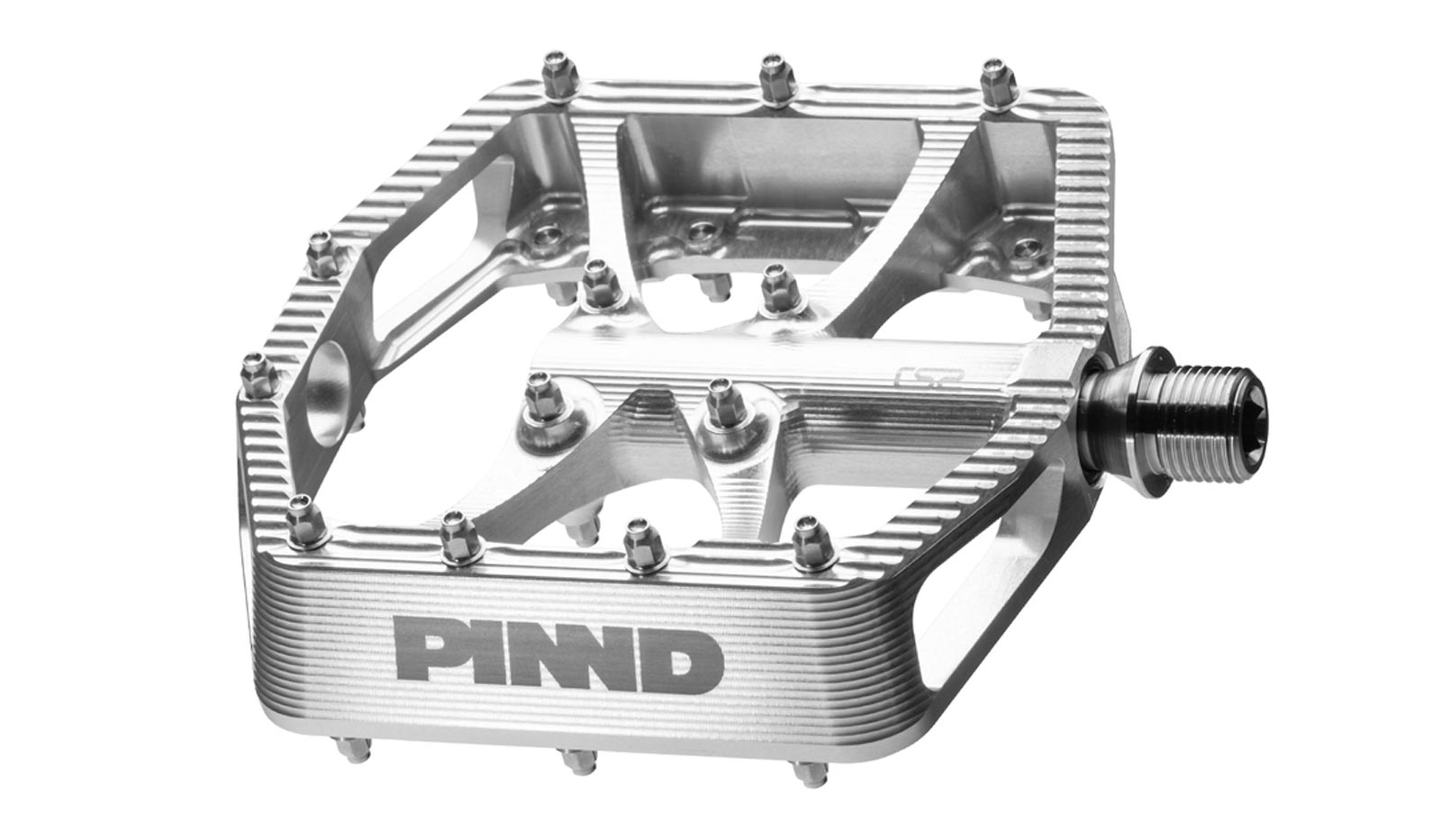 Why would you put a titanium axle on a pedal intended for downhill racing. Makes no sense.

If it says titanium, they can charge more.